If ever an ereader was aspirational, the Kindle Oasis, Amazon‘s eighth generation and most dramatically impressive to-date, is it. Taking the online retail behemoth’s aping of paper with the flexibility of digital books to its most extreme example so far, the Kindle Oasis promises cutting-edge ergonomics along with the flexibility of not one, but two batteries and a clever way to carry both. It comes at a hefty price, however.

Amazon has had custom-designed cases for its ereaders since the beginning. With the Kindle Oasis, though, the cover becomes smarter than just a way to protect the display. 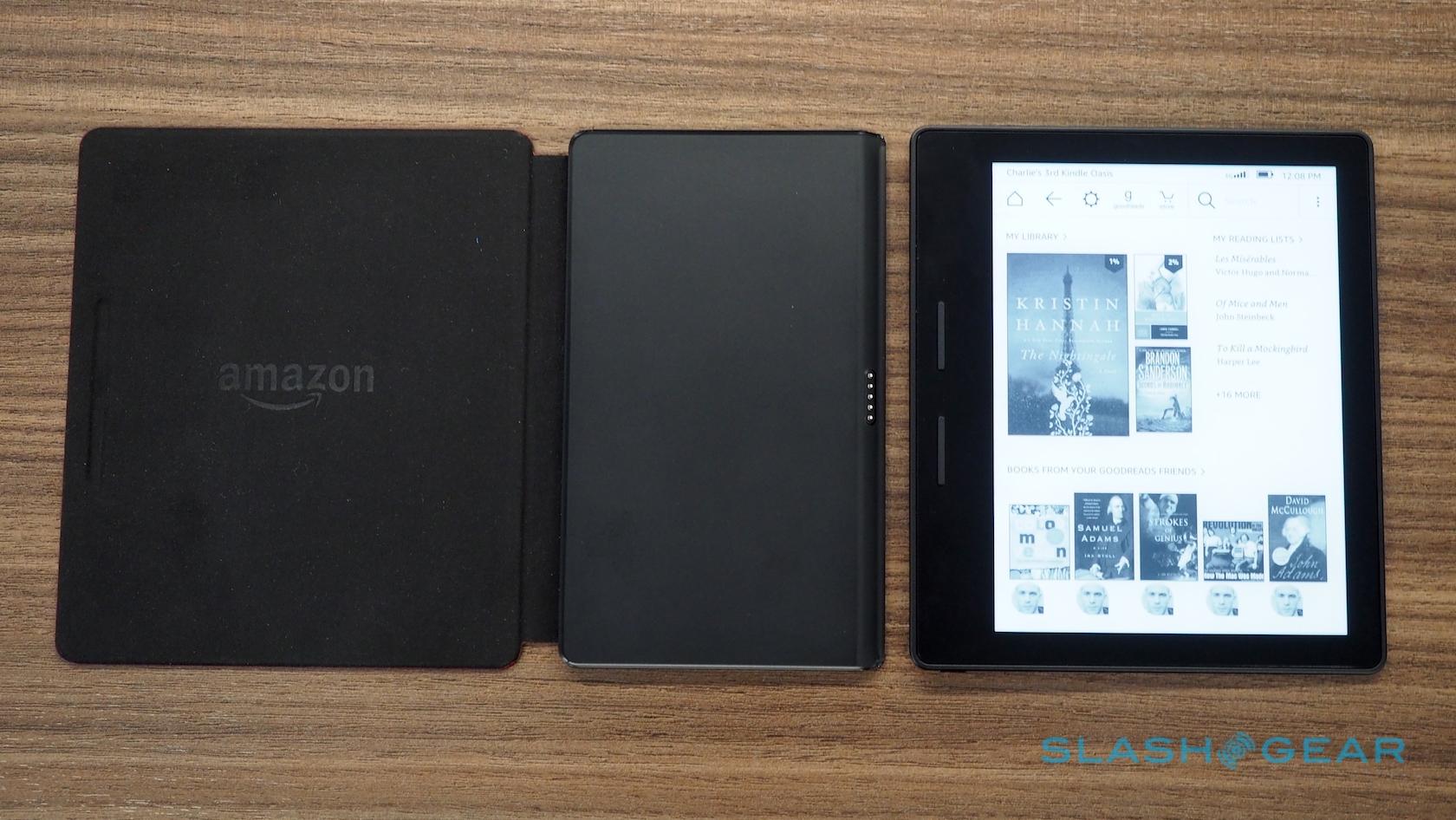 Instead, it’s now a charging cover, adding a second battery to the Oasis’ own internal one. You can use the new Kindle entirely unfettered by the flip-cover if you prefer – that way, it’s a waif-like 4.6 ounces, and 3.4mm thick in the display section – or snap on the charging cover, which has a second, larger battery inside.

The two join courtesy of twelve magnets, with a curve of leather – finished in either black, merlot, or walnut – extending all the way around from the rear to cover the touchscreen. As before, opening the cover turns on the ereader. 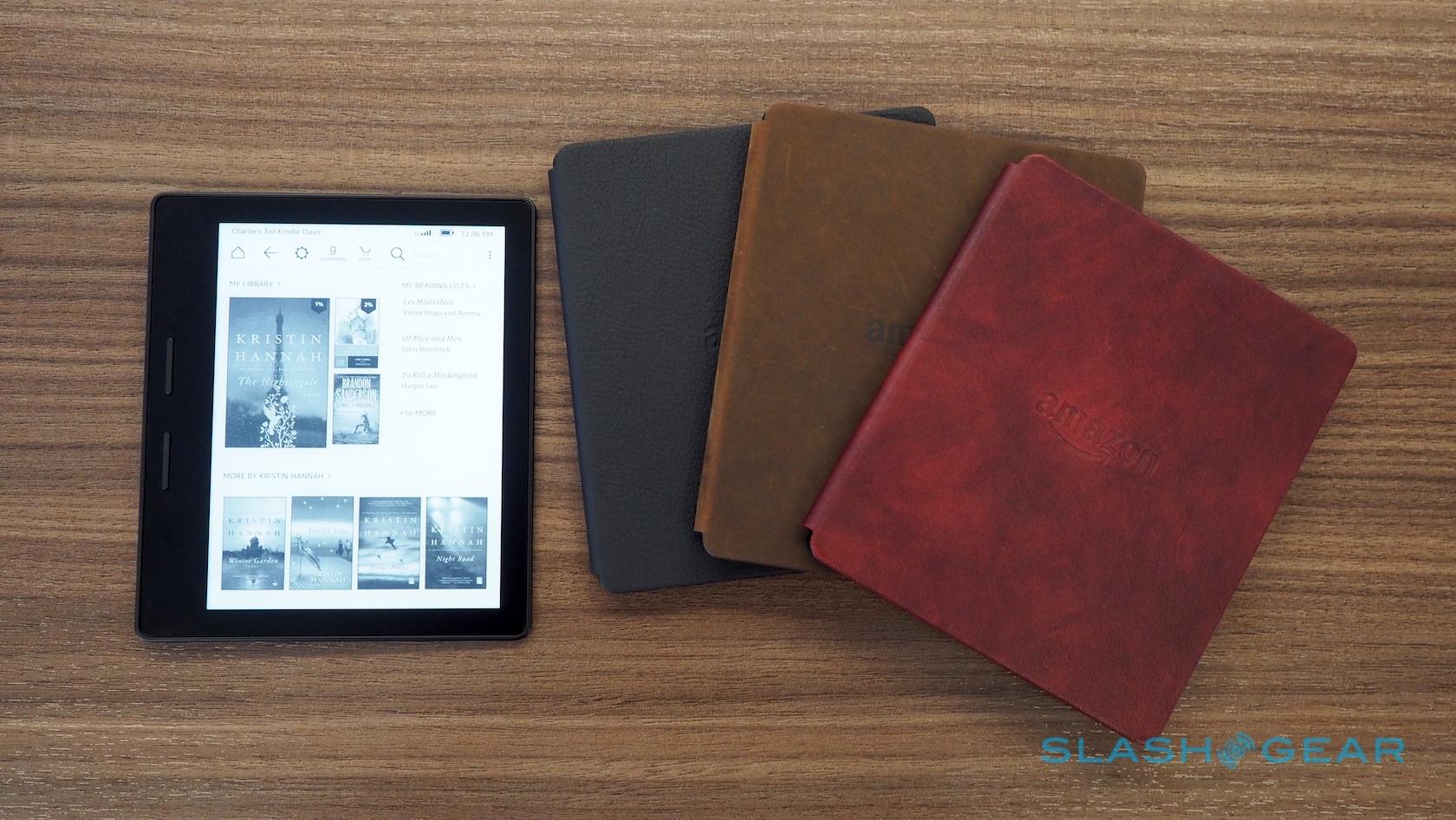 Amazon tells me it expects some owners to always detach the Oasis completely and use it bare; that way, it’s the most lightweight. Others, though, will leave the charging cover in place; even then, it’s slimmer than the Kindle Voyage with its origami case attached. 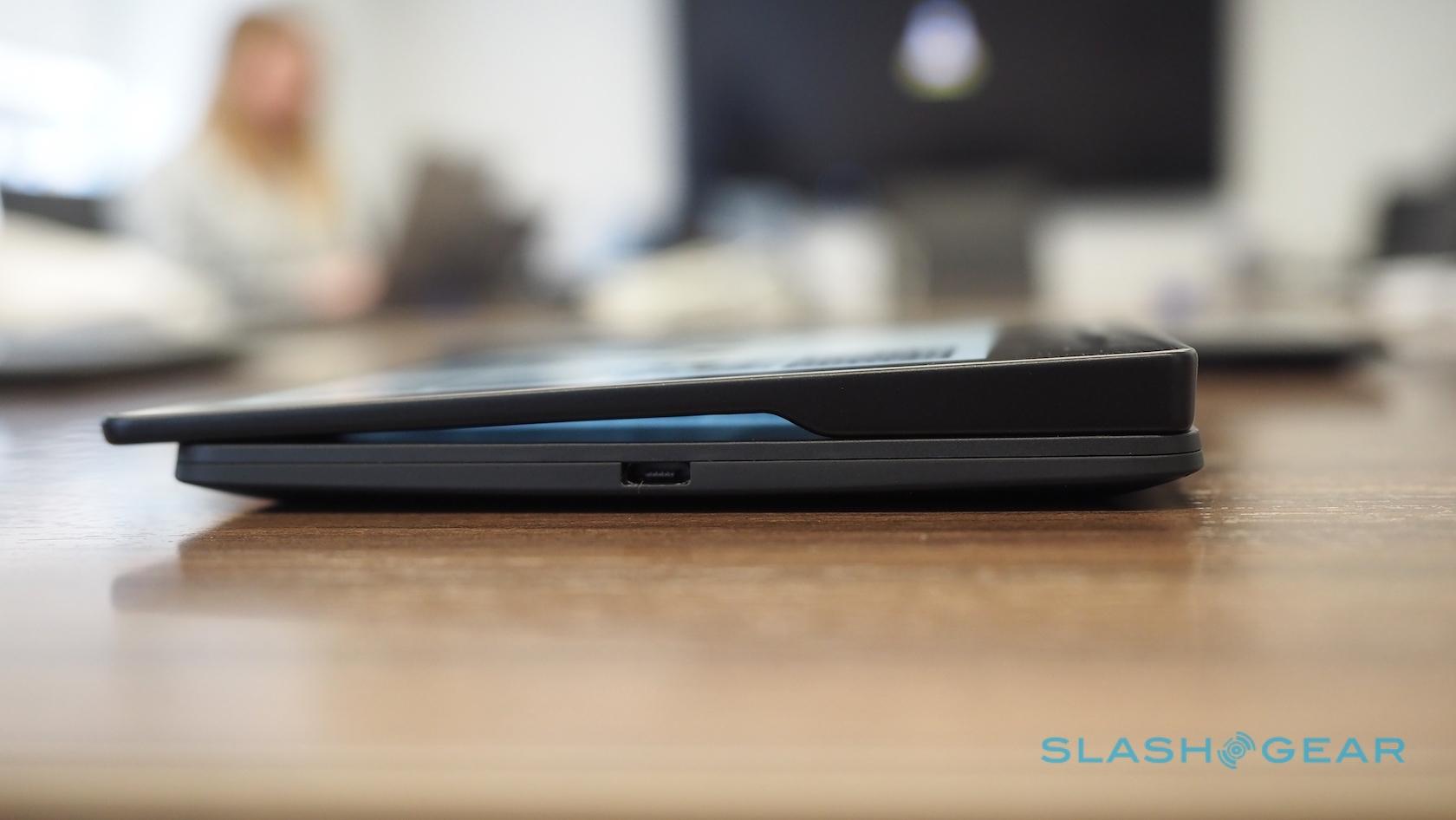 It’s astonishing quite how thin the Kindle Oasis is. Obviously, Amazon has moved most of the electronics to one edge of the ereader – creating an easily-gripped bump there in the process – but that alone wasn’t enough to keep weight down without skimping on strength. 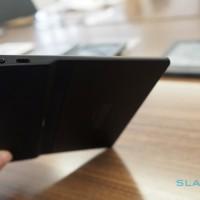 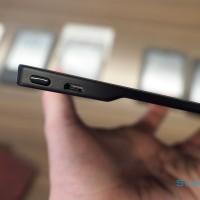 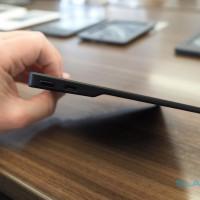 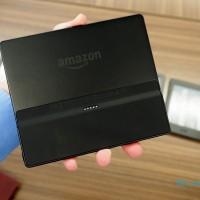 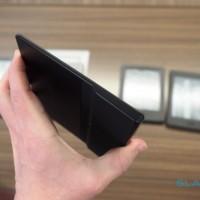 So, Amazon begins with a piece of flexible molded polymer, which is then given an electroplated coating of metal. The screen uses a new backplane, the glass now just 0.2mm thick which means it, too, can flex slightly if the Oasis is dropped; it’s laminated to a sheet of chemically strengthened front-glass for impact and scratch protection.

There are some less obvious advantages to the asymmetric layout, too. The center of gravity is shifted to the thicker side, too, which means it’s more comfortable to hold with a single hand. Shift from your right to your left hand, or vice-versa, and an accelerometer automatically rotates the display and flips the page-turn keys. 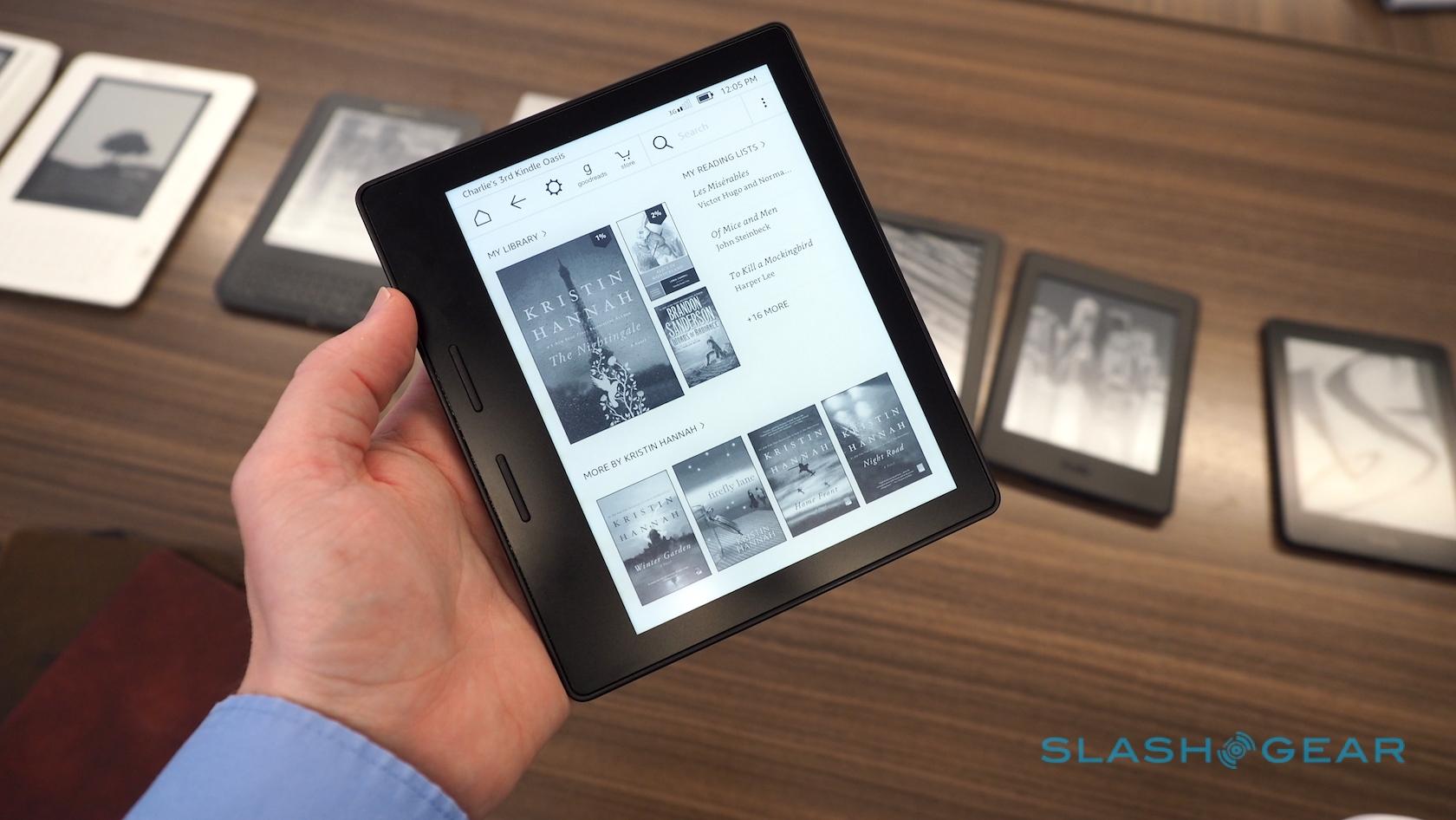 The display is the same, 6-inch E Ink capacitive touchscreen as on the Kindle Voyage, a crisp 300 dpi which does a great job of showing Amazon’s homegrown Bookerly and other fonts. For the Oasis, however, the screen’s electronics have been moved from the bottom edge to the side, and in the process allowed Amazon to fit 60-percent more LEDs and thus make the illumination brighter and more even.

Navigation is a little easier, too. Amazon has gone back to physical page-turn keys with the Kindle Oasis (though you can still swipe the screen left and right if you prefer) and the two buttons, though fairly small, are easier to press while holding the ereader one-handed. In contrast, I’ve found holding the Voyage with just enough force to avoid dropping it, but not so much as to inadvertently trigger the touch-sensitive PagePress buttons, can be a recipe for an aching hand after an extended period reading. 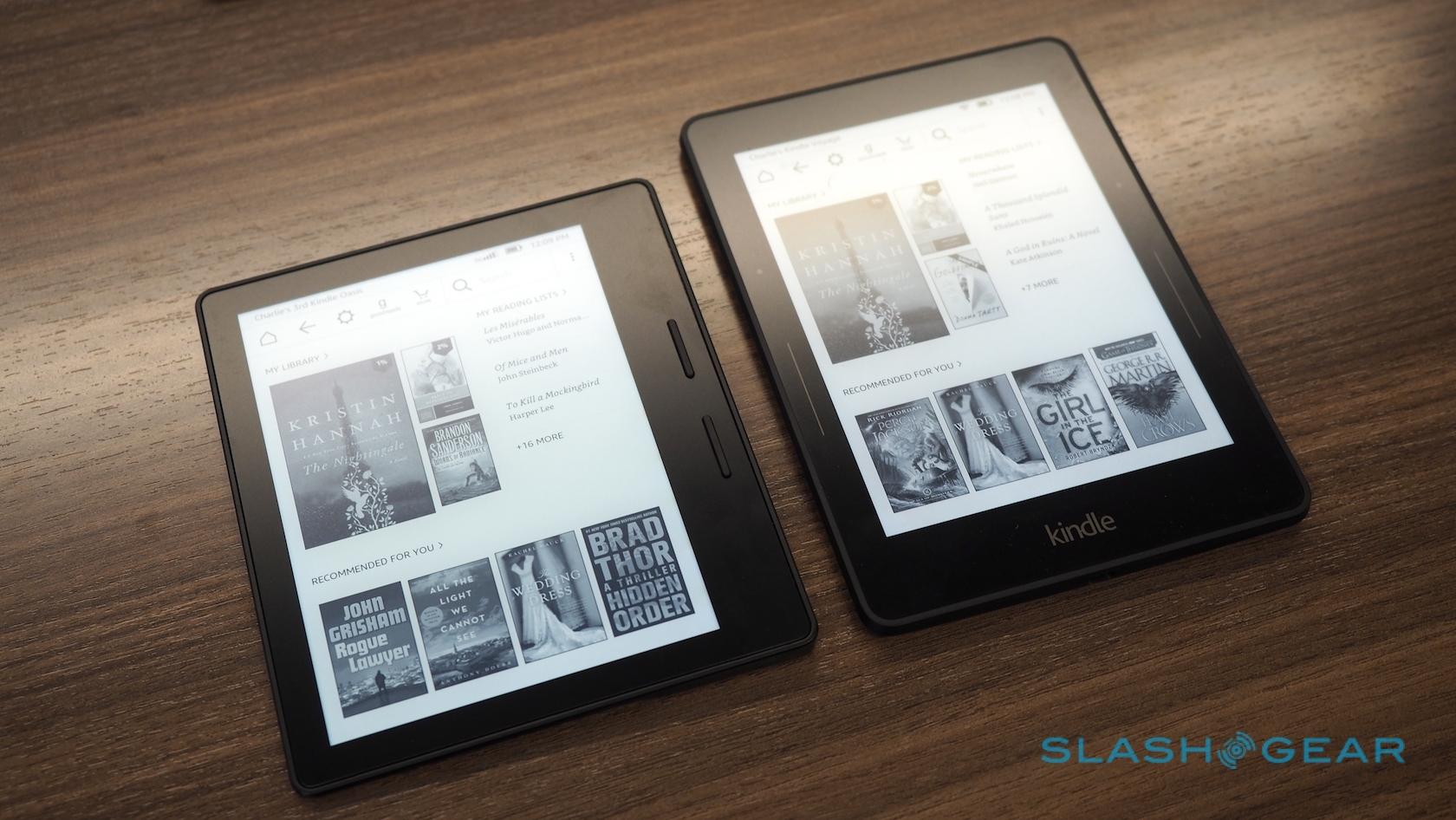 With the battery in the Oasis alone, Amazon says you should be able to read for two weeks – that’s assuming 30 minutes per day, mind, and with the wireless turned off. With the charging cover lending its power, meanwhile, you should get nine weeks in all under the same conditions.

Amazon has introduced a new hibernation mode for the Oasis, too. Left idle for an hour and, as with other Kindles, the new ereader will automatically go into standby. Beyond an hour, though, it drops into an even deeper sleep from which resuming takes a little longer but the whole thing is even more frugal. 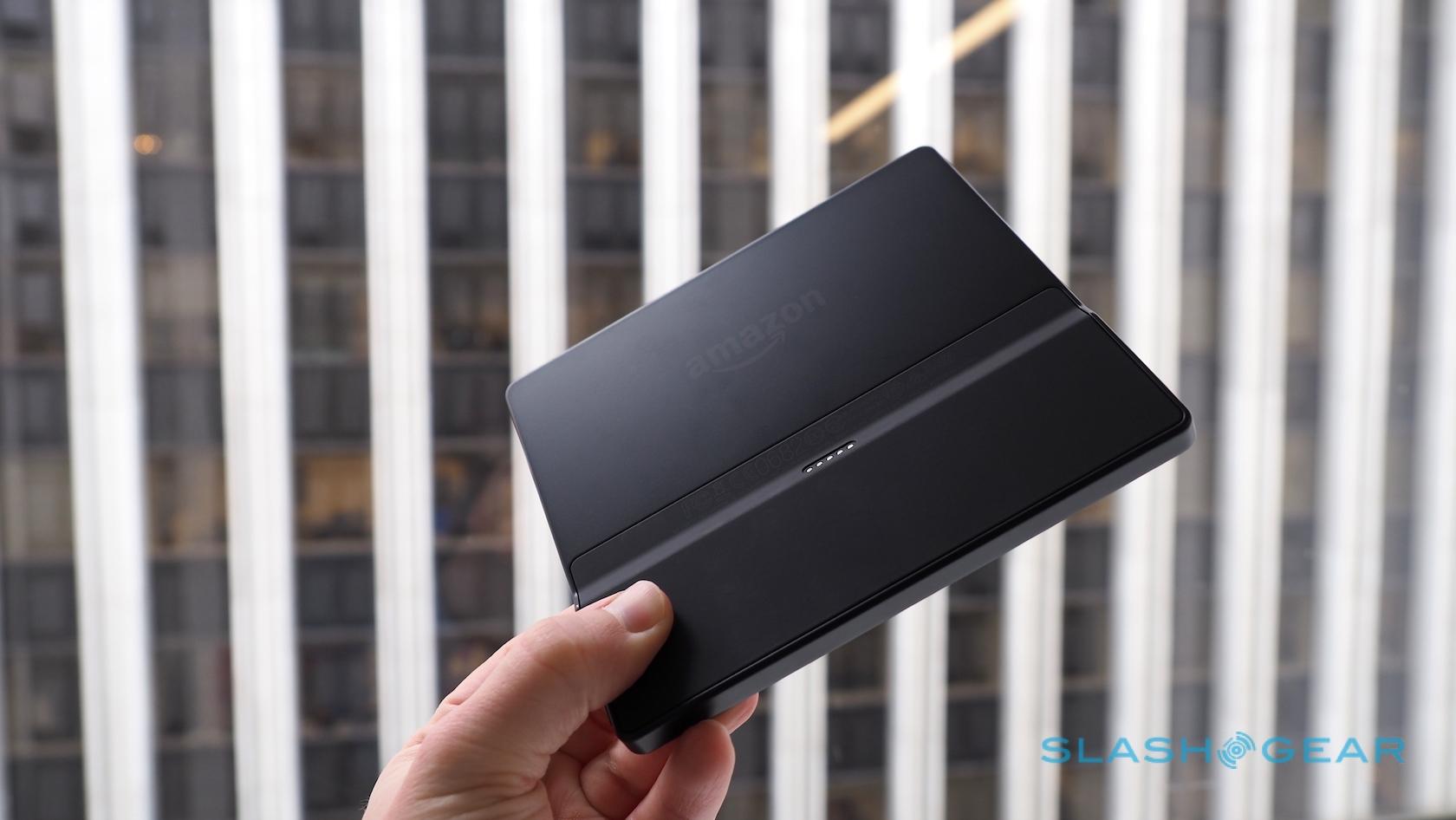 Sensibly, when the Kindle has the charging cover attached and is plugged in, it’ll prioritize getting the Oasis recharged. A full charge of both should take around two hours.

The magnetic docking system and battery connector are proprietary, though Amazon tells me that it’s not averse to the idea of licensing the system if a third-party case manufacturer came up with a suitably interesting idea. 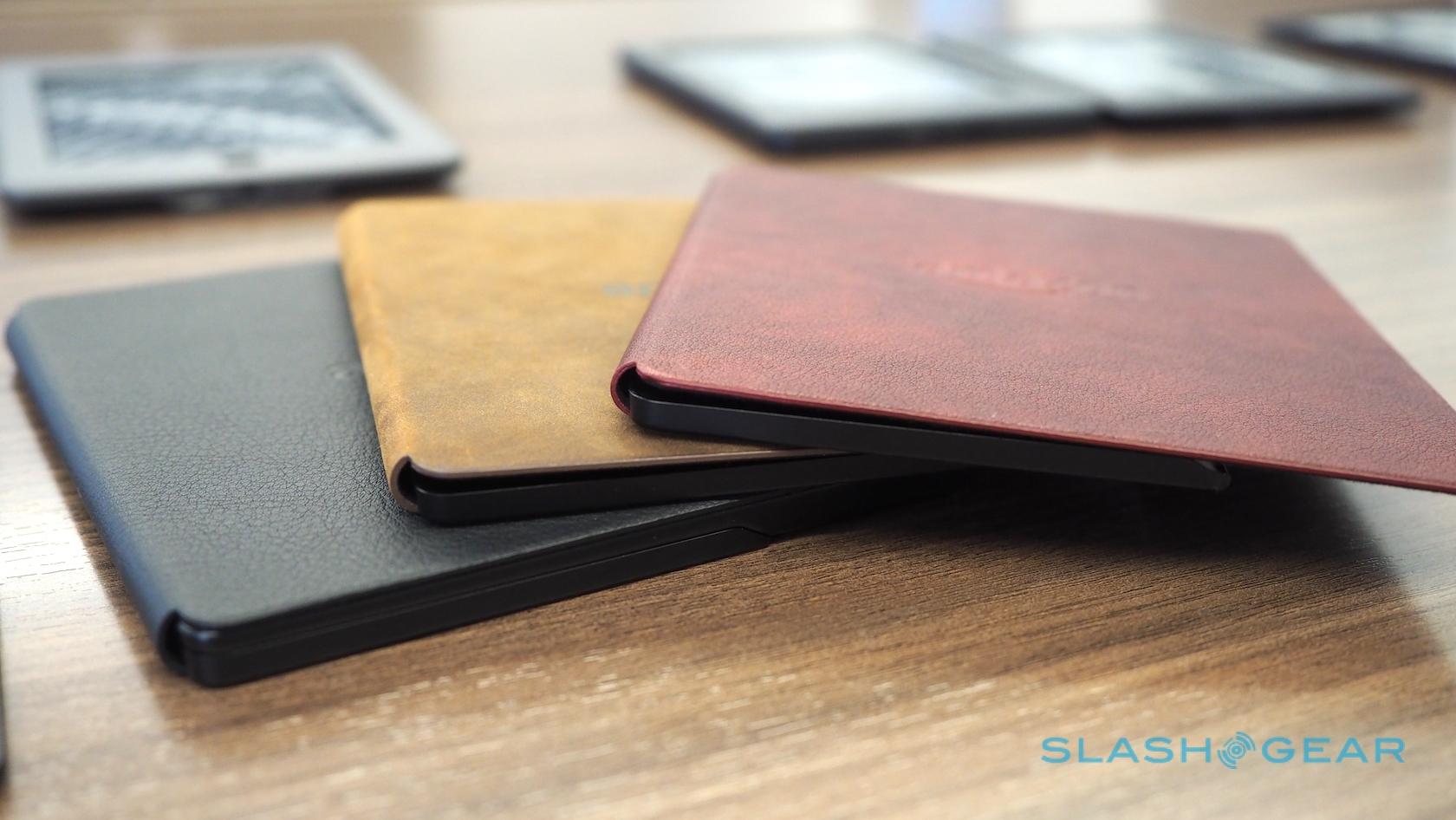 Aesthetics aside, the processor is the same as in the Kindle Voyage – in my relatively short time to test it, navigation felt snappy – and you get the same library management, Goodreads integration, and ebook recommendation engine as found in Amazon’s latest firmware version.

Unfortunately, audiobook fans will be disappointed to find that, also like the existing Kindles, there’s no headphone jack. Perhaps most divisive, too, is the fact that it’s not waterproof, something Kindle fans have been demanding for some time.

Amazon plans to continue to offer the $79.99 Kindle, $119.99 Kindle Paperwhite, and $199.99 Kindle Voyage even as it launches the Kindle Oasis. That’s not least because the new ereader will put a serious dint in your wallet. 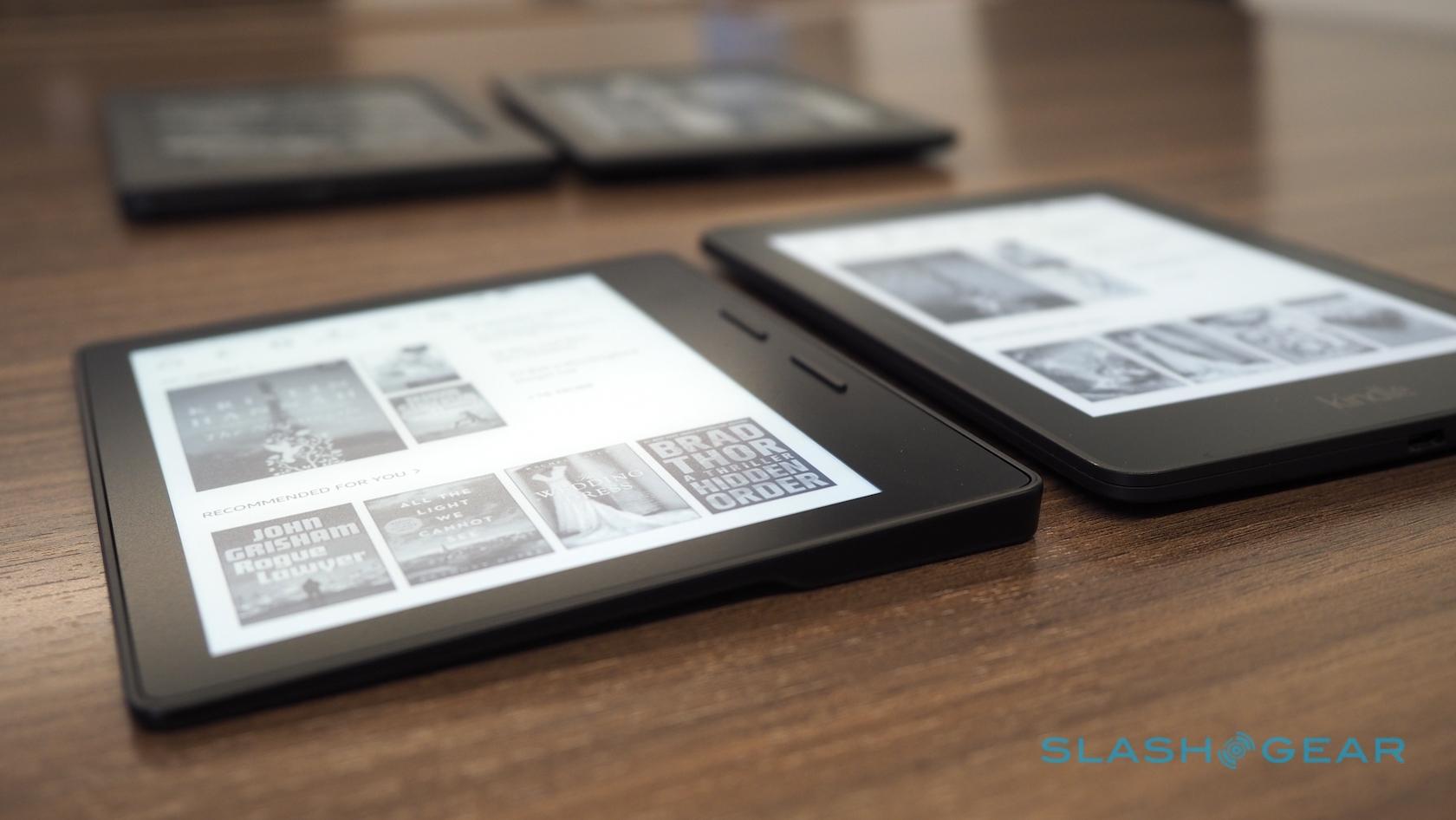 Cheapest cost of Oasis entry is $289.99, for the WiFi-only version. Figure on $359.99 if you want 3G for downloading ebooks on the move. Both come with Amazon’s Special Offers, which show adverts on the standby screen; another $20 on top of each version does away with the ads.

$290 is a whole lot of money for a single-use device. Apple will sell you an iPad mini 2 for $21 less; alternatively, Google’s Nexus 9 is just $9 more. Both do ereading – with Amazon’s own Kindle app, indeed – and much, much more. 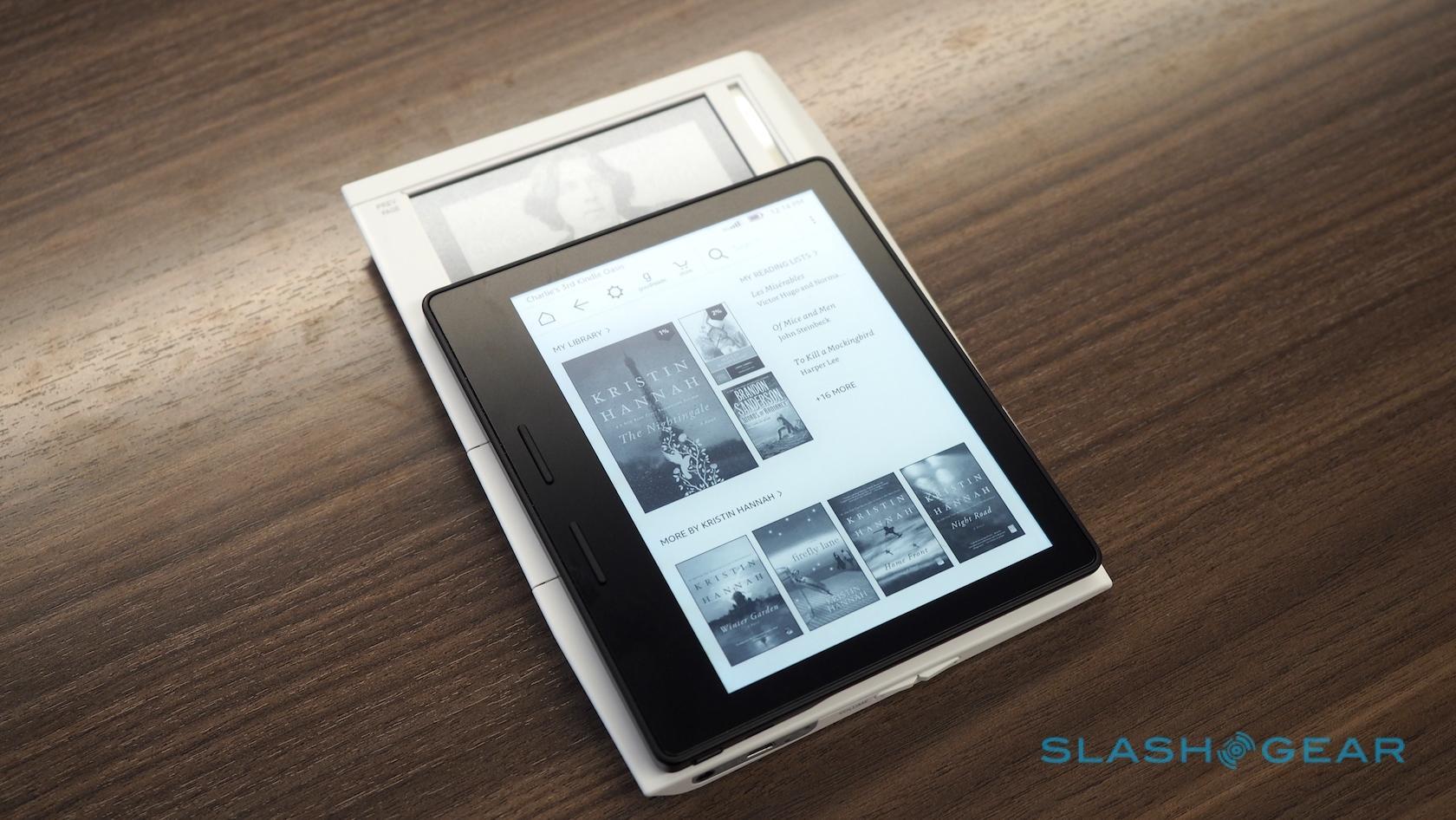 Neither offers the battery life of the Kindle Oasis, however, nor the singular purpose of the eye-friendly E Ink display, or the extreme one-handed comfort. There’s value in not being distracted with notifications or other apps, too. Still, I suspect that just as with the lush, fertile haven in the midst of desert with which the Kindle Oasis shares its name, it’ll be a rare sighting only found in the hands of the most avid readers.

The Kindle Oasis is up for preorder today, with Amazon saying it will ship from April 27th.