Acer‘s pair of touchscreen Windows 8 tablets, the Iconia W510 and W700, try out two different routes for finger-friendliness, and we grabbed some hands-on time to see how successful they’ve been. The Iconia W700 is the larger of the two, an 11.6-inch full HD 1920 x 1080 slate with a desktop docking station into which the tablet securely clicks.

Once in place you get several extra USB ports, among other things, and with a keyboard and mouse – for those times you don’t want to reach forward and stab up to ten fingers at the touchscreen – you could create a useful little desktop replacement. Ports include USB 3.0 and even Thunderbolt, and the whole thing is sturdy and flex-free with its slick brushed-metal finish. 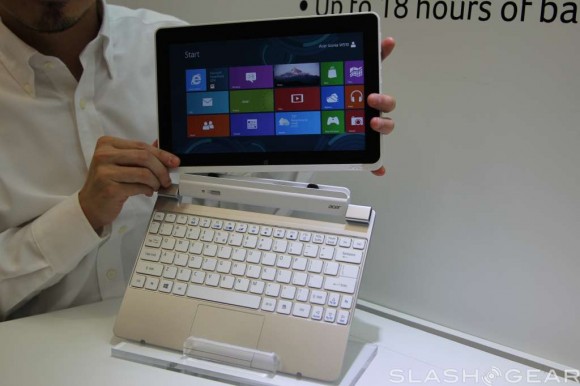 As for the Iconia W510, that’s smaller at 10.1-inches and follows in the footsteps of ASUS’ well-liked Transformer series. It has a separate keyboard dock with reasonably usable keys, and interestingly the slate section can be rotated all the way around so that it’s facing both backward, handy if you want to prop it up for movie watching or impromptu presentations.