This week the already-released Acer Iconia Tab 510 has appeared at no less than Computex 2012, complete with its lovely 15-hour battery life, Android 4.0 Ice Cream Sandwich, and NVIDIA Tegra 3 quad-core processor. This device has a respectable 1280 x 800 pixel resolution 10.1-inch display, versions in 16 or 32GB for internal storage, and Dolby Digital Plus software and hardware that supports 5.1 channel audio via HDMI output. This device has some Olympic markings on the back and is made specifically for you to capture the 2012 games as they move forward in London – catch all the action!

This device’s 9800mAh battery is quoted by Acer as reaching for the stars with 15 hours of HD video playback – great for getting your sports on! You’ve got a 5MP camera on the back just incase you actually intend to go to the games with this device, HDMI output with dual-display support: quite unique, and Bluetooth 2.1 +EDR. Acer has created a tablet that’s set to hit the top of the line here in the summer of 2012, and with this look, feel, and price (right around $430 USD) you’ll be happy you joined the party. 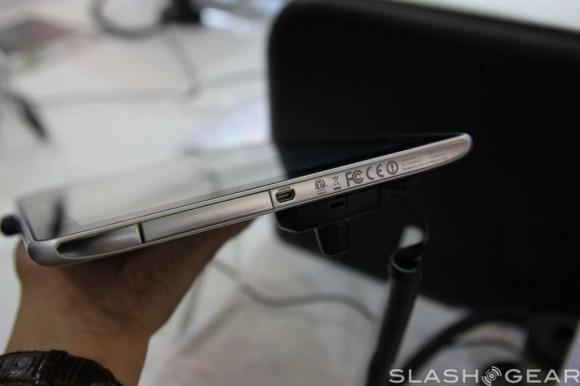 Have a peek at this device in the gallery below as well as in the images above as we place our hands upon it at Computex 2012. We’ve got one whole heck of a lot more Computex action for you coming up and a great archive made already, so head to the timeline below to get your Acer on!