A Week With the L1 v2 Laser Pico Projector : iDevices and Wrap-Up

Behold the advertised use: connecting this projector to an iPod (or an iPhone, iPad, etc.) This is the AAXA L1 v2 Laser Pico Projector “Week With” review, an extended look at this lovely little device and how it fares in the hands of your humble narrator. Today’s entry is the final of several posts, this one both showing how nice the device works with Apple products (an iPod Touch 2nd generation, to be exact,) and finally what our final verdict is on if you should get one for yourself.

If you plan on plugging your iPod Touch or other Apple product into this projector (or any other, for that matter,) you’re going to have to buy at least one more cord. I decided on the standard Apple Composite AV Cable. This cable is available from the Apple store or several other locations such as Target. Incidentally, this cord will end up being useful for those of you whose iPod cord is on its last leg (like mine was) since it also connects via USB. This cord connects easily to the AV cord included in your projector’s box. As you may know if you’ve been following along with these reviews, the most obviously simple ways to utilize the projector are by plugging in a USB flash drive or by transferring files to the internal memory of the projector itself. You’ll need to have your own USB cord (not included in the projector package) to transfer and/or your own flash drive to work with in these cases. It’s important to remember that you’re probably not going to be able to use this projector straight out of the box unless you’ve got these cords already handy (or don’t mind stopping by your local electronics store.) 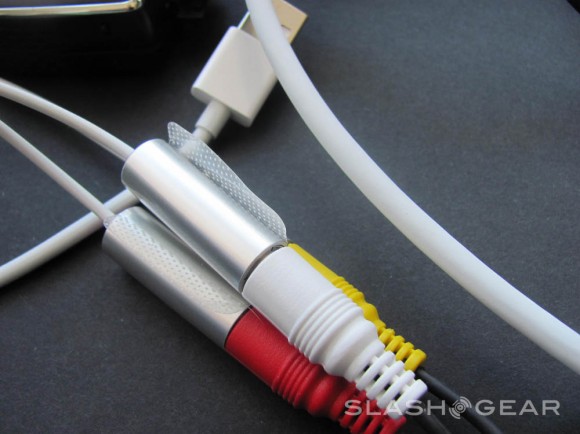 As noted, the demo you’re about to see is done with a 2nd gen iPod Touch. It’ll end up working basically exactly the same for any other iDevice from that generation forward, I can’t speak for anything behind. When you’ve got the gigantically long Apple-official cable connected to the quite-short AV cable included with the projector, you’ll probably want a couple of twist-ties or a rubber band handy so you’re not tripping over yourself. Once you’ve got it all in your hands, you should be set to go to watch videos. It’s important to note that without hacking your iDevice, you’ll only be allowed to project videos. No gigantic Angry Birds for you.

If you’ve ever been in a classroom setting with one of those gigantic projectors with infinite buttons, you’ll be used to perfectly sharp images and lots of adjustments available for the size and shape of the picture. This is not that. This projector requires that you physically move back and forth to get the image to be bigger or smaller, and there’s basically no adjustments to be seen as far as if you’re trying to shoot the image up on a wall at an angle – straight on is the only way if you’re trying to make sure your box is perfectly boxed.

We’ve seen this projector in action for over TWO weeks now (extended because of the wacky holidays) and have only been disappointed by a few things: battery time, the loudness of the fan (which is basically always on,) and image breakdown. The image breakdown (which you can see if you take a look back at the first demo,) can be excused by the fact that this only seems to happen when playing a video file that wasn’t necessarily meant to be played outside its dvd confines (aka it wasn’t the best quality in the first place,) but still, imperfections in translating a video might be foremost in your mind when your buying a projector made for that single purpose.

The battery time and loudness of the fan are things you’re going to have to deal with whenever you use a projector, especially if you’re talking about one as small as this that you’re going to be carrying around in your pocket. This device is definitely fun, transports with great ease as its tiny and weighs basically nothing, and I can think of a dozen different ways to use it without even brainstorming that hard.

Is it worth the price? You betcha. Are you going to be able to use it in a professional setting? Depends on what profession you’re in. If you’re a freelance artist looking to show off your wares in odd places – yes! If you’re a businessman looking to project weekly earnings and charts – maybe not. This is not a big projector you’re going to use to show movies to crowds of people, but the cool factor is definitely here. If you want to be pro, go bigger (AAXA has lots of more substantial, but less mobile projectors if you wish,) if you want to be totally cool, buy the L1 v2 Laser Projector. Do it NOW!