A Week With the L1 v2 Laser Pico Projector : Hands-on and Unboxing

Welcome to the first installment of our “Week With” series of reviews with the handheld L1 v2 Laser Pico Projector from AAXA. Marvel at its tinyness, laugh with joy when you realize the box is about six times larger than the actual device. Take a look inside with us as we explore a projector whose form is a handy pocket size. This first episode sees a very basic hands-on and unboxing of the device, as well as an in-depth photo exploration.

As you might already know, if I open a box up for a review of the device inside and I find that the box is above-average quality, I’m gonna tell you about it. This particular box is a combination of shipping-quality toughness and second-thought printing. As you can see in the photos and video, there is a slide-off cover to the box which is itself surrounded by a brightly colored print display which tells you all about the product as it would stand in the store. This piece of gloss paper is taped on, letting you know instantly that AAXA does not depend on its graphic design presentation to sell you its products. Is this a good sign? Sometimes no, but in this case, it’s just fine, as the product itself is relatively high quality, as you’ll discover through the rest of this week’s reviews.

The people who would buy this projector are not the same people who buy Apple products whenever they’re released and refuse to use anything other than an iPod to listen to their music. Or is it? If you take a look at the image used in this post, you’ll see that they’re attempting to capture at least a part of the Apple consumer crowd. The box itself doesn’t really reflect this.

Inside the box are some thin cardboard separators and a piece of plastic cushion padding. These aren’t the sort of pieces you’re going to keep. Might as well just toss them in the garbage as soon as you open the package. Each cord is wrapped in its own plastic bag, the directions are situated right on top, and the device itself is precariously placed inside the thin cardboard right in the middle. The one we have here came in perfect condition, but I would definitely warn you to make sure your device isn’t bashed against the side before ripping all the packaging apart, just incase the cardboard broke down in the shipping process and a shipper’s thrown the box (as is often the case in shipping boxes this size, no matter who you get it shipped through.) 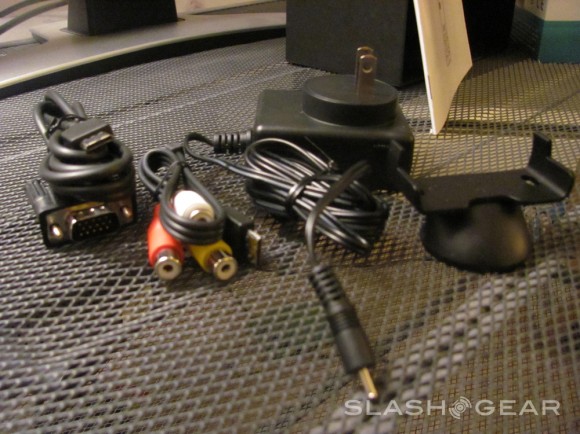 The Guide and Cords

In the box besides the device you’ll get an instructional manual and several cords. The manual is nicely printed and very easy to work with. Each time I’ve had a question about how the device works thus far, it’s been simply addressed by the book in an easy-to-find chapter.

The cords are thus: power cord (which plugs into a wall socket exclusively,) VGA video cord (which I agree with Intel, will be dead sooner than later, but is very nice to have here and now,) and a composite A/V cord – you know the kind, with the three color plugs red, white, and yellow. Both the A/V cord and the VGA cord connect to the device via a port on the right side of the device right next to the charge plug, both under the same flap.

As you’ll see in the video, and I still miss here, I wish there was a straight USB cord here to connect to the computer, as it does show this happening in the manual, but then again, there’s no headphones or earbuds either, and more than likely anyone purchasing this device already owns both.

The projector itself, as you can see in the video, is definitely hand-held. This is as far as technology has brought us so far with thinness in a laser projector, and I am satisfied. A big question for the future is how projectors are going to be integrated into thinner devices like tablets, etc – but then again, maybe they never will be? 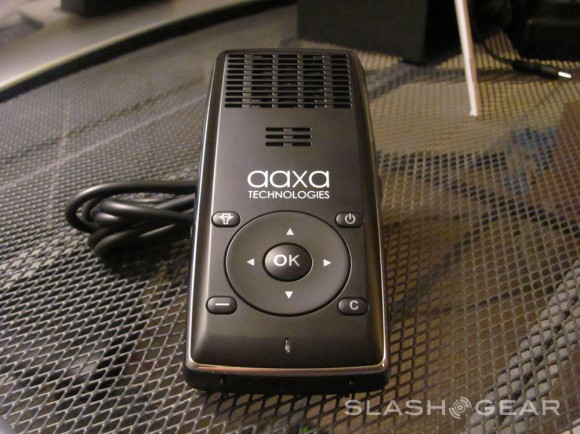 You can see each of the plug covers plainly around the edges of the device: the power cord imput and external port (for VGA, RCA, and S-Video cords) under the same cover along the right side below the USB 2.0 port under a separate cover. Along the top is the projector glass – do not look directly into it! This is something AAXA is very clear about in the users manual. Watch out! Along the left side is the headphone port as well as the reset button (under the surface, accessible with a pin or something tiny, of course.)

The buttons include an Projector Adjustment button (top left), On/Off button (top left), Menu button (bottom left), and Cancel (bottom right.) Between these are up, down, left, and right, as well as an OK button in the center. Above these buttons you can see where the fan cools the engine off, and on the back you can see a laser warning as well as several rubber pads for setting the device down without scuffing it up. 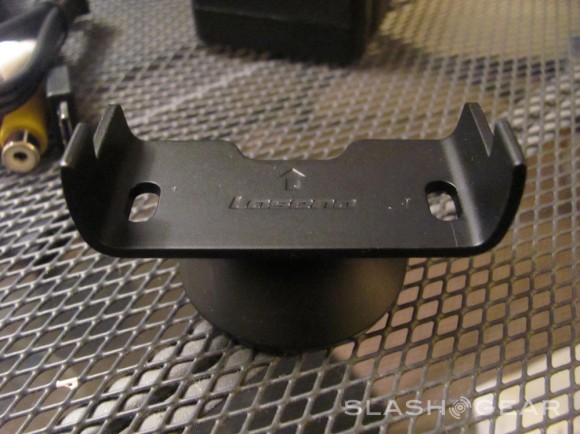 The bracket is an item that lets you know exactly what this device is – not just an object that works in and of itself, but one that works as a teammate of other devices. This device is a projector, and should be thought of as a middleman between your device and the image it projects. The bracket lets you know that although the device works perfectly fine held in your hand or set on a flat surface, you might consider adding a tripod or similar holding object. That’s not to say that this device cannot play media on it’s on though – it can! You’ll hear all about that in the future reviews.

So get all pumped up! This is a handheld projector that works pretty neatly. Stay tuned all next week for several more reviews as we get used to it and blast images all over the place (as I write this, I’m watching the Empire Strikes Back on my wife and I’s apartment wall as we’re snowed in for the day – fun!) Seeya then!

A Week With the L1 v2 Laser Pico Projector from AAXA

Take a look at all of our “Week With” posts for the L1 v2 projector in this ever-growing list right here, starting with the first announcement and ending with the final word: