A huge ice reservoir could be hiding inside Mars

A vast cache of water or ice could be lurking just beneath the surface of Mars, scientists claims, using meteorite research to figure out where the “missing Martian water” might have actually ended up. While signs of the historic effects of subsurface and ground ice have been observed in previous orbital surveys, evidence for a lingering supply of water has proved troublesome to pin down, even though the red planet’s history is believed to have seen it wet and warm. By looking at the make-up of Martian meteorites found on Earth, however, connections have been spotted between them and a possible surface reservoir.

Although there are hydrogen atoms to be found in Mars’ mantle and its current atmosphere, what the team at the Tokyo Institute of Technology, the Lunar and Planetary Institute in Houston, the Carnegie Institution for Science in Washington, and NASA’s Astromaterials Research and Exploration Science Division discovered is that they have different isotope ratios to the atoms in the meteorites.

That difference in neutron counts suggests the hydrogen in the rock samples came from a different water source, and not a small one at that. 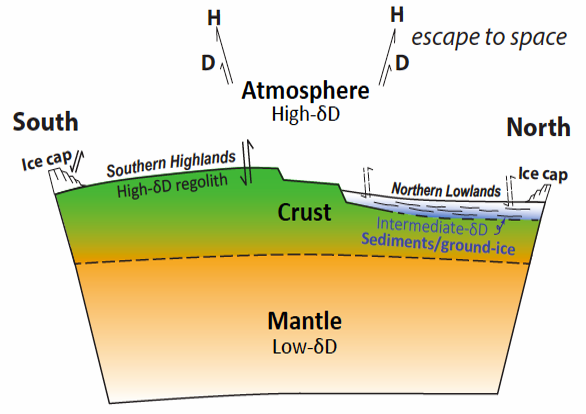 The fact that the isotope signature is different indicates the water reservoir could be so large as as to not have found an isotopic equilibrium with what’s in the Martian atmosphere. Instead, one possibility is of sublimation from a sizable ice layer to the atmosphere, and then a subsequent loss of hydrogen atoms from there to space.

Further research into more samples is required, the scientists point out, but if there’s a cache of water or ice to be found under the surface, that could have huge significance for future manned missions to Mars.

NASA has said it foresees such missions going ahead in the 2030s, though there remain huge technical challenges, not least refining the Orion spacecraft that would be responsible for getting a crew there.

Meanwhile, the Curiosity rover continues to send back new findings, most recently including evidence of organic materials.