Mercedes-Benz is readying its most aggressive assault on Tesla so far, and the 2022 EQS takes a page out of Elon Musk’s playbook in the process. Headed to dealerships later this year, the EQS – like its S-Class cousin – isn’t intended to be a mass-market EV for every driver. Instead, as with the original Tesla Model S, it’s a premium electric car with deep-pocketed early-adopters in mind.

Certainly, Mercedes has more affordable EVs on its roadmap. While the EQC electric SUV now isn’t expected to launch in the US, there’ll be smaller – and cheaper – EQA and EQB crossovers to come.

Where they use what the automaker calls its “powertrain flexible architecture” which can be turned to gas, diesel, or electric configurations depending on the vehicle and trim, the 2022 EQS is the first of Mercedes’ models to use its EVA dedicated large electric platform. In time there’ll be an EQE, a slightly smaller sedan akin to the E-Class, along with an EQS SUV and an EQE SUV. 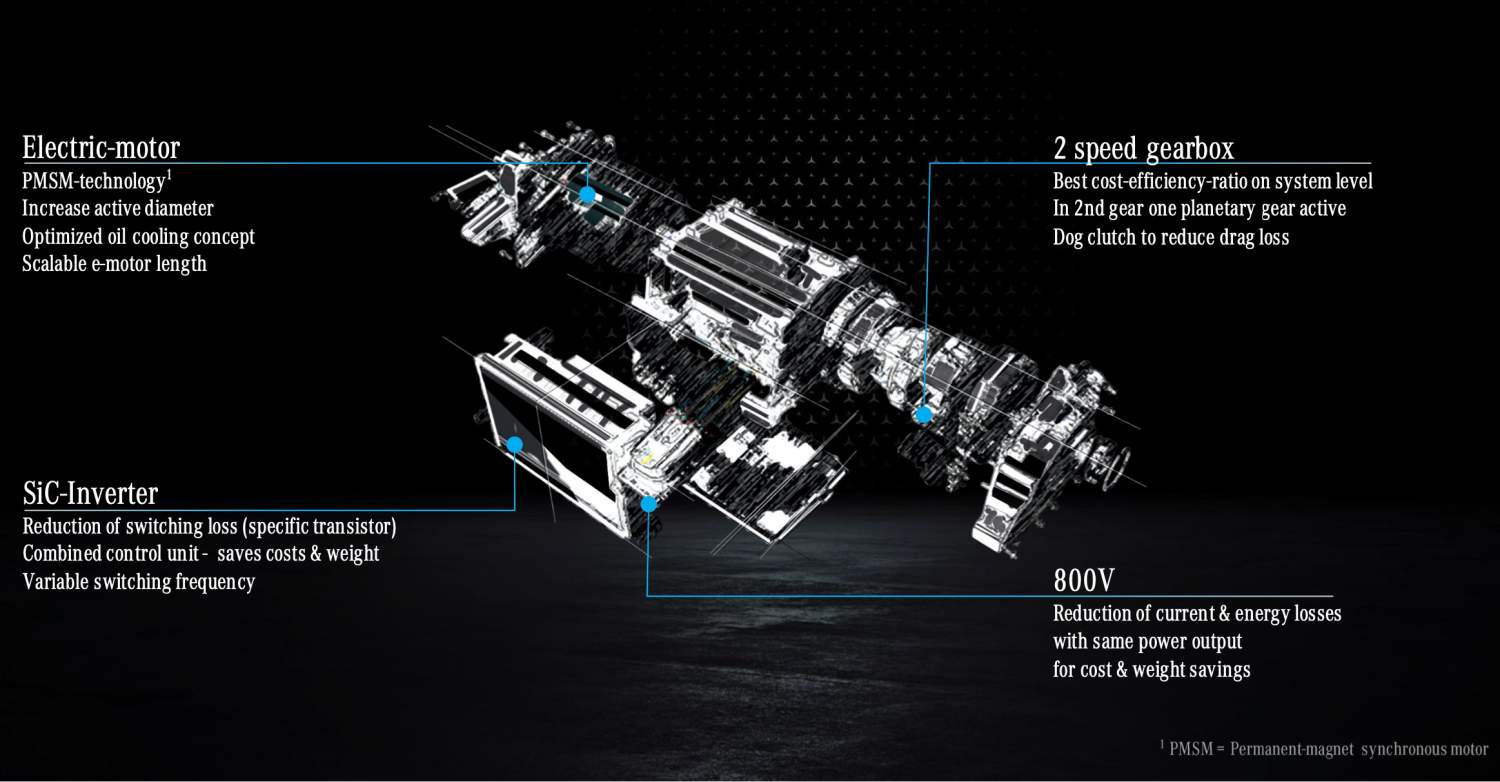 Specifications for those haven’t been shared yet, but we know what the EQS is promising. Both rear-wheel drive and all-wheel drive variants will be offered, with permanently excited synchronous motors used. Either way, Mercedes is tapping extra-powerful rear axle motors with six-phase operations, relain got two windings with three phases each, and extra cooling potential. 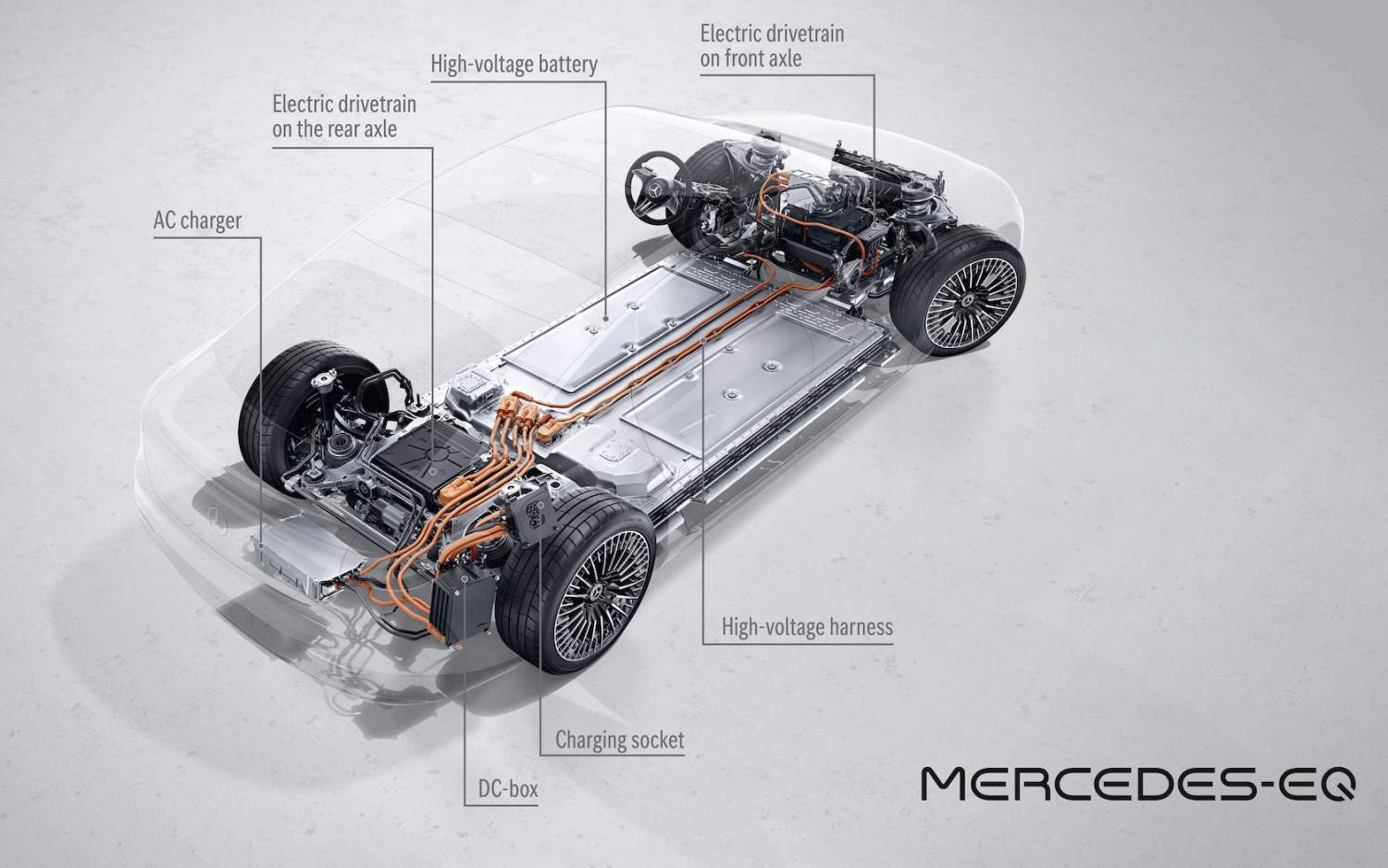 The 4MATIC AWD versions of the EQS will be able to adjust torque front to back, depending on driving needs. It’ll be much faster to adapt than traditional mechanical systems, too. Mercedes says it’ll be checking torque requirements 10,000 times per minute, and tweaking as necessary. We’ve seen some of how that works in our EQS co-drive.

For slowing, there’ll be an adjustable recuperation system. That’s controlled via paddles on the steering wheel – which, on a traditional car, would control the transmission that the EQS lacks – and has three stages. In the most potent you’ll be able to bring the EV to a complete stop via recuperation alone, with a maximum output of 290 kW back into the batteries. Mercedes will use smarter driving controls too, such as automatically switching on recuperation to slow the sedan if traffic ahead slows. 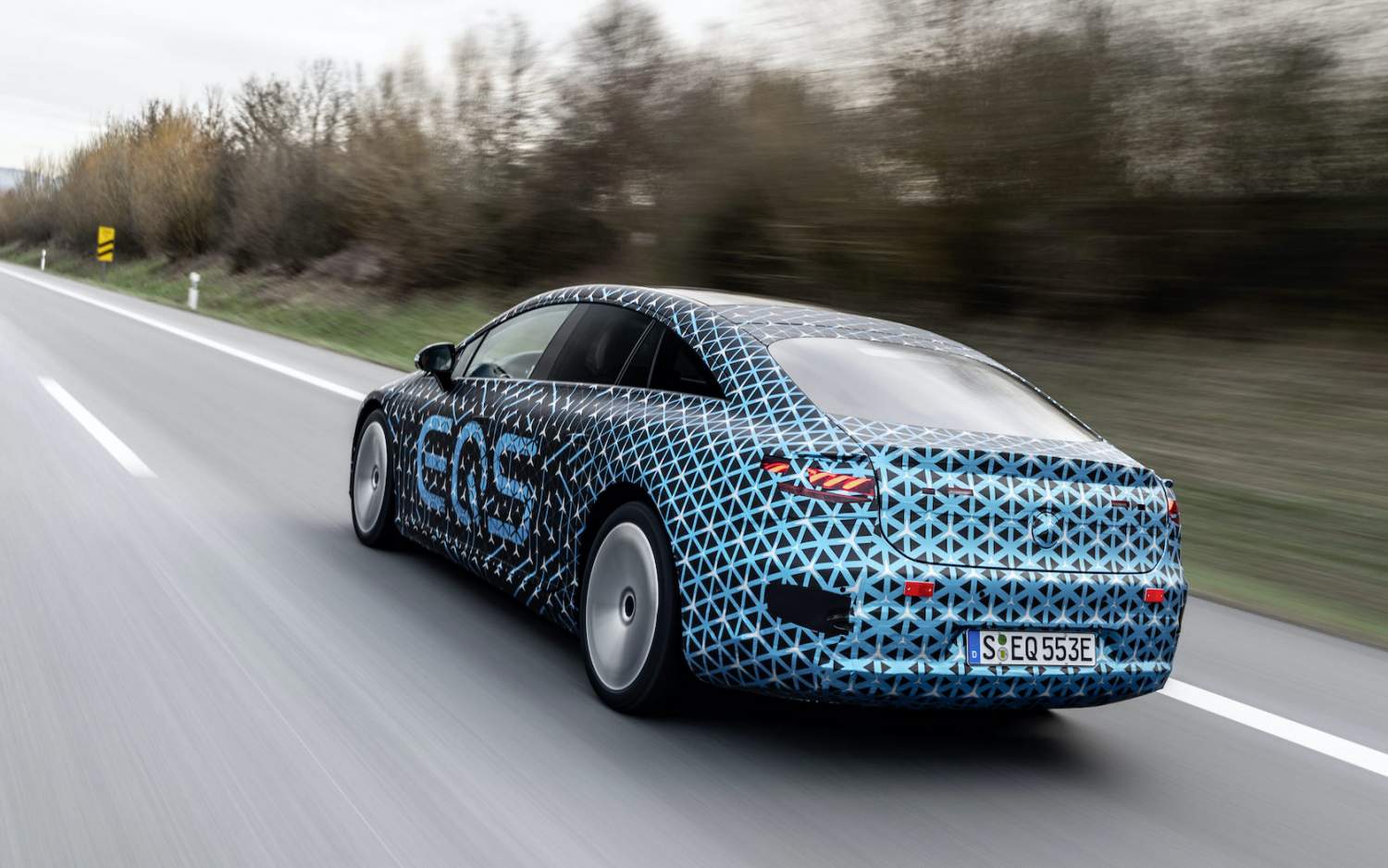 On the battery side, Mercedes will offer the EQS with two sizes: 90 or 107.8 kWh. Both will use 400V architecture and be so-called smart batteries, with support for over-the-air (OTA) updates in future for new power management. The automaker will cover them with a ten year warranty (or 250,000 kilometers) over loss of capacity. 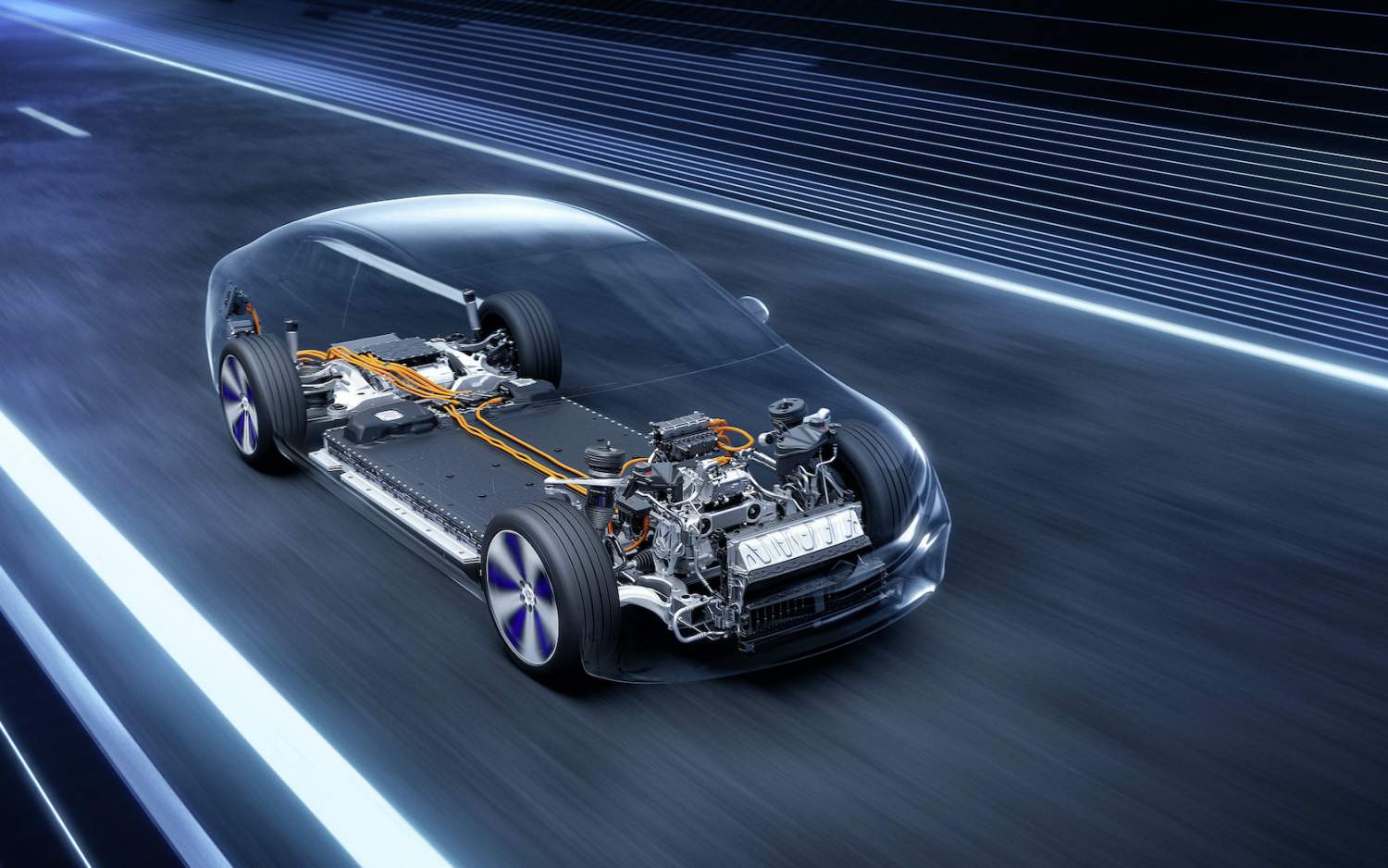 For charging, there’ll be up to a 22 kW onboard charger for Level 2 systems such as those in a garage or workplace. DC fast charging with up to 200 kW support will be offered for compatible public chargers. Plug & Charge will be used to simplify that process – you’ll just have to plug the car into the charger, and a digital handshake will handle all the authentication automatically – while Japanese owners of the EQS will be able to tap bi-directional charging, feeding power from the EV’s batteries back into the grid or using it to power a house during an outage. 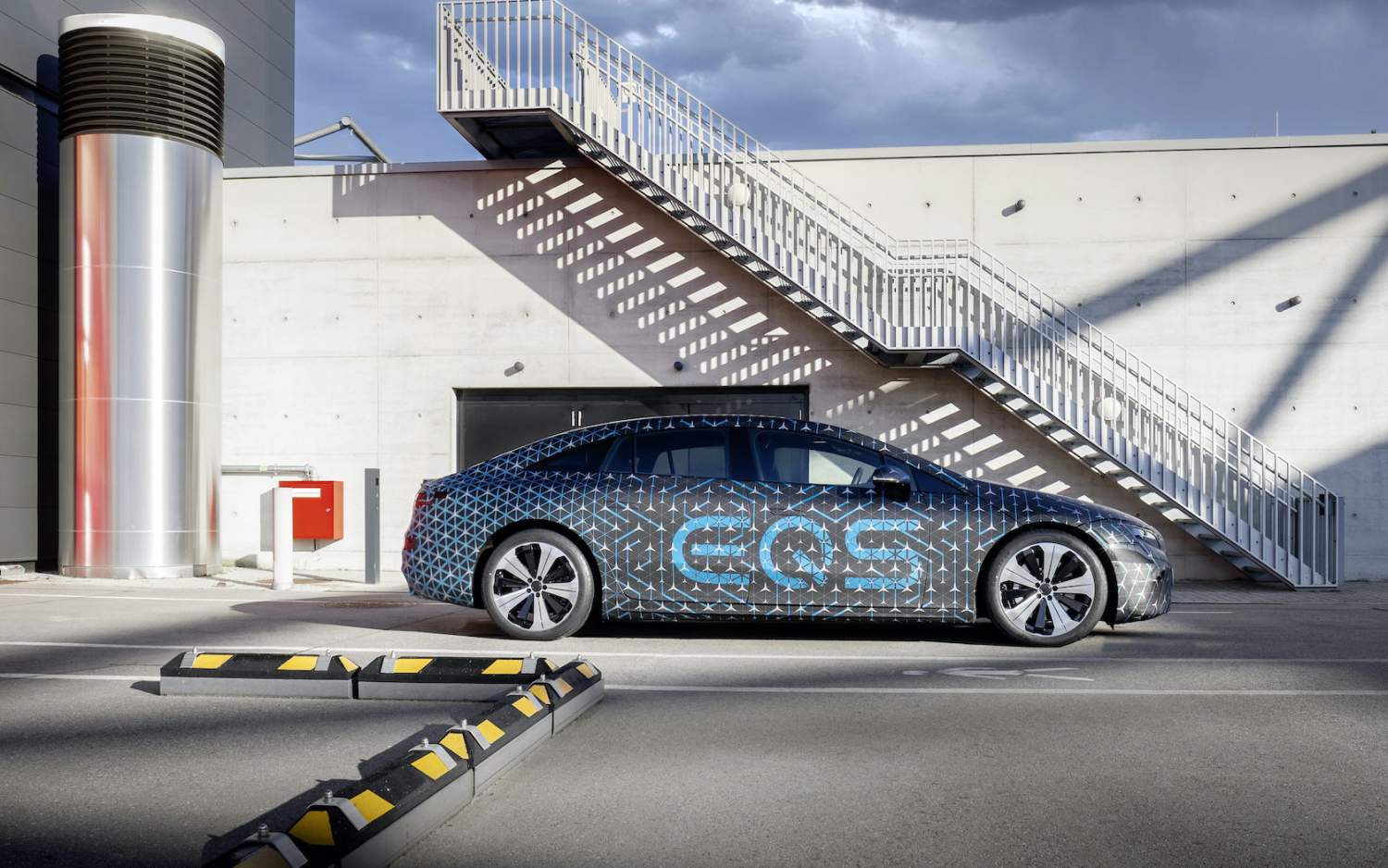 As for range, Mercedes-Benz says to expect up to 770 km from the WLTP cycle for its biggest battery. That works out to 478 miles, though as we’ve seen before the US EPA test cycle can produce very different results from its Euro counterpart. Still, if Mercedes can consistently deliver above 350-400 miles from the EQS, that would go a long way to helping deliver on the EV’s promise of finally being a car to give Tesla’s Model S some true luxury electric competition.