Audi turned heads this week with the official debut of the 2022 Audi e-tron GT, and the all-electric grand tourer looks set to shake up the luxe EV space when it arrives in US dealerships this summer. Competition in the category is certainly smaller in number than for gas rivals, but when you’re going toe-to-toe with Tesla and Porsche that may be small comfort. Read on for Audi’s new electric flagship by the numbers.

Audi didn’t reveal just one 2022 e-tron GT model, in the end, but two. The entry-level car will be the 2022 e-tron GT quattro Premium Plus, expected to arrive in the summer of this year. There’ll also be a second trim variant of that, the Prestige, which bumps up the standard equipment but leaves the core hardware specifications the same. 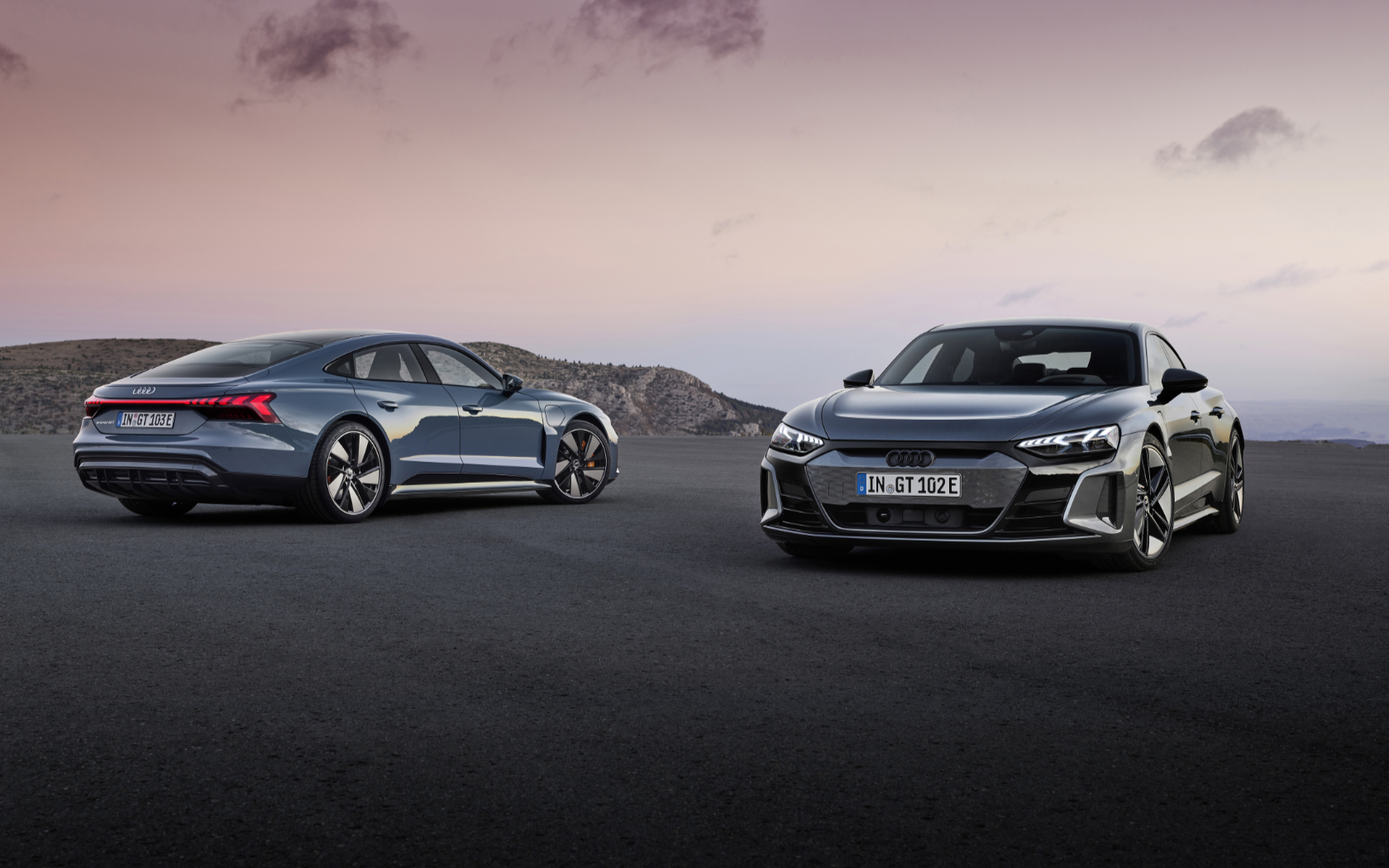 More exciting, though, is the 2022 Audi RS e-tron GT. That will also start to show up in dealerships in the US in summer 2021, and pairs the same core styling with more performance and power.

From the first time we saw the e-tron GT Concept back at the LA Auto Show 2018, it was clear Audi was onto a winner with styling. Long, low, and purposeful, the four-door’s coupe-inspired styling takes obvious inspiration from the A7, but taps some of the advantages of electrification to crank the design up to eleven. As Audi’s design chief explained last December, the modular battery, separate front and rear electric drive units, and short overhangs can only be achieved because there’s no gas engine or driveshaft to accommodate. 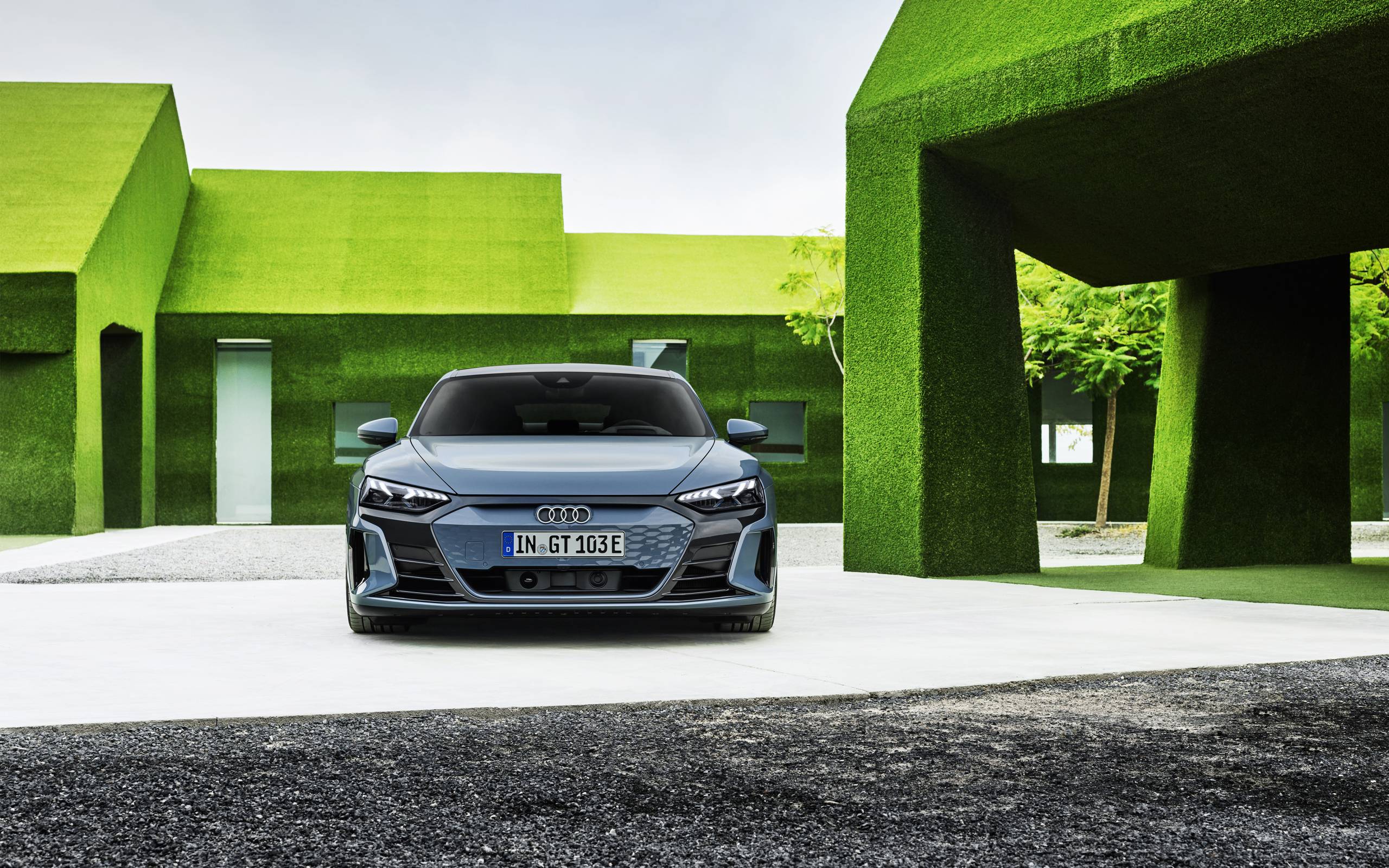 The two permanently excited synchronous motors (PSM) in the e-tron GT combine to deliver 469 horsepower normally, or up to 522 hp in overboost mode. That lasts for 2.5 seconds in launch control, and also bumps torque to 472 lb-ft from its usual 464 lb-ft. 0-60 mph comes in 3.9 seconds, and Audi says that just as important is the fact that you’ll be able to do that, repeatedly, without having to worry about overheating. 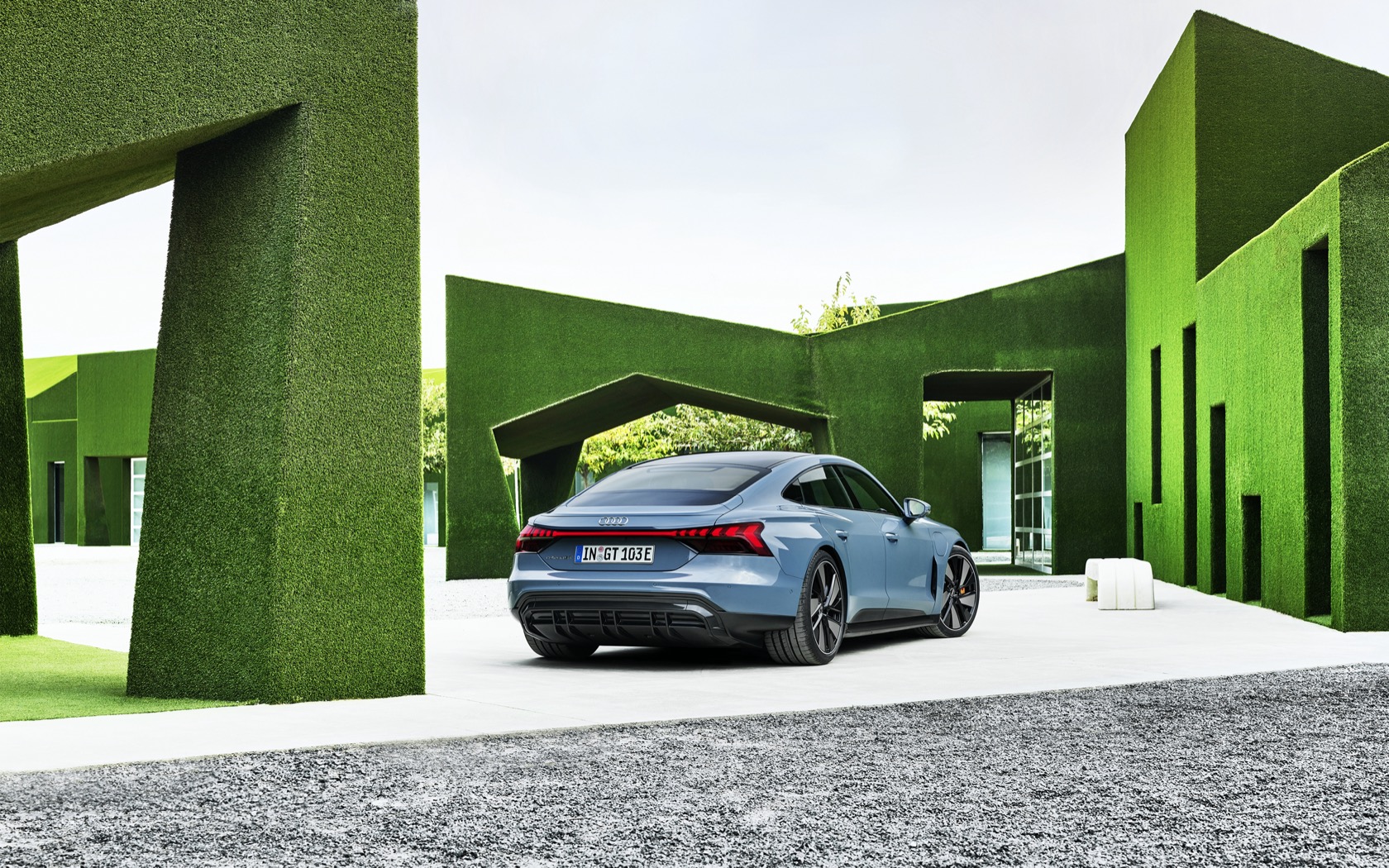 Top speed is 152 mph, and there’s three-chamber air suspension as standard. That’s an upgrade compared to the existing e-tron SUV and e-tron Sportback, with more capacity for a broader range of settings for comfort through to sport. All-wheel steering is optional, while a rear differential lock with fixed locking values is standard.

First EV to bear the RS Badge, the 2022 RS e-tron GT gives the Taycan some competition

For those who want even more performance, the 2022 Audi RS e-tron GT should do the trick. First EV in Audi’s range to bear the RS badge, it may not stray too far from the regular car in styling – though 20-inch 5-spoke AERO wheels are standard, versus the 20-inch 5-double-spoke alloys on the non-RS, and 21-inch upgrades are available – but it does pump in more power.

Quattro all-wheel drive remains standard, with the same front motor used but a new, more potent rear motor. Together they’re good for 590 horsepower or 637 hp in overboost, with total system torque of 612 lb-ft. 0-60 mph comes in 3.1 seconds, and top speed is limited to 155 mph.

If you’ve been following the Porsche Taycan, the underpinnings of which Audi has used for the e-tron GT, that makes for an interesting comparison. The Taycan Turbo has more power – up to 616 hp normally, or 670 hp with overboost – but only trims 0.1 seconds off the 0-60 mph time. Its speed has a higher limiter, too, at 161 mph. Still, the Audi comfortably bears the Taycan 4S, which has 522 hp in overboost mode, and requires 3.8 seconds to hit 60 mph. 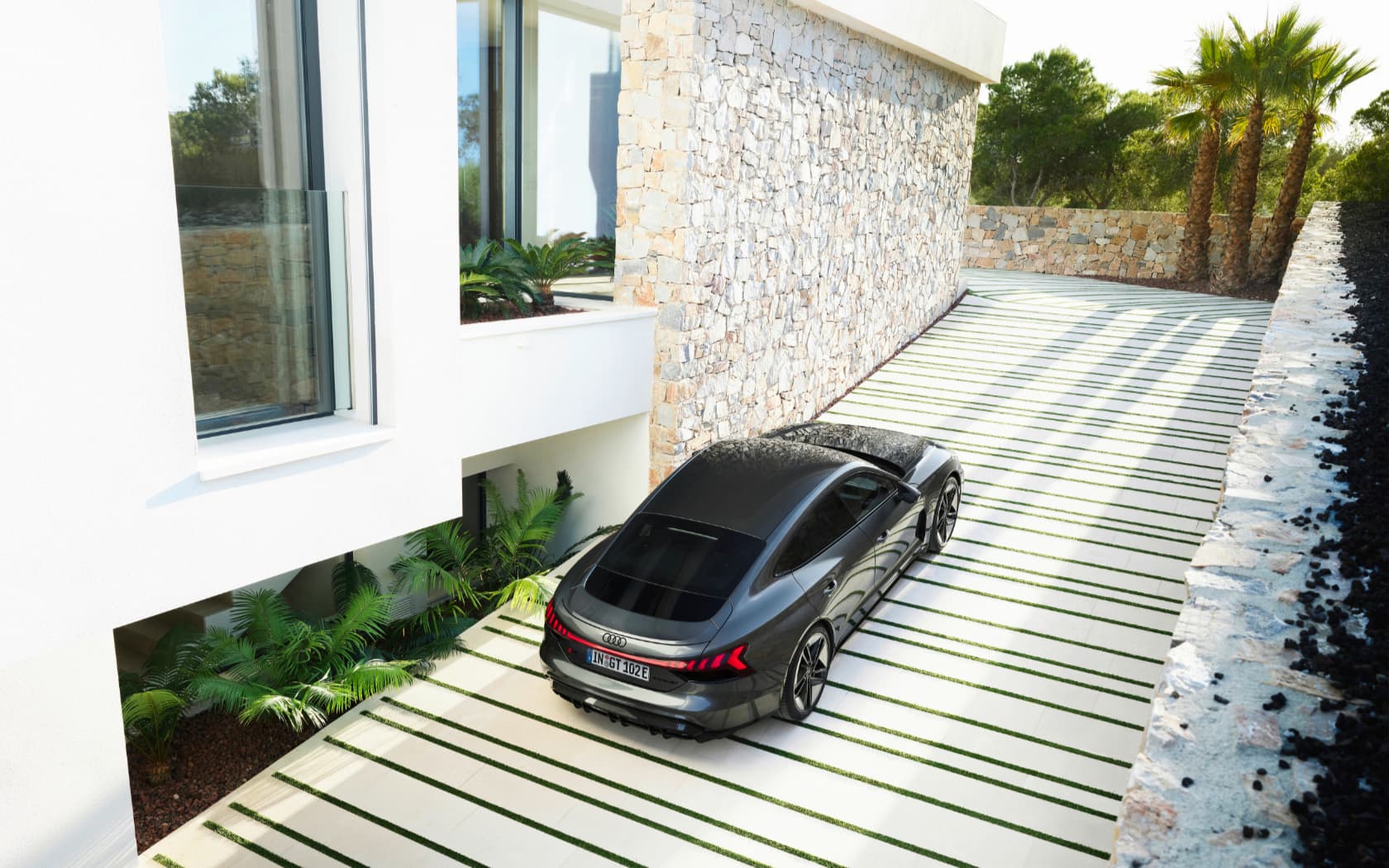 Helping actually make the most of that power is not only same three-chamber air suspension on the Audi, but all-wheel steering as standard on the RS, plus a controlled rear-axle differential lock which can vary from 0-100 percent.

Audi e-tron GT range is good but not great

Speed, of course, isn’t the only criteria by which we judge a performance electric car: range is essential, too. Audi is yet to confirm US EPA figures for the new cars, though its estimates suggest there’s another reason you might want to opt for the e-tron GT rather than its Taycan cousin. 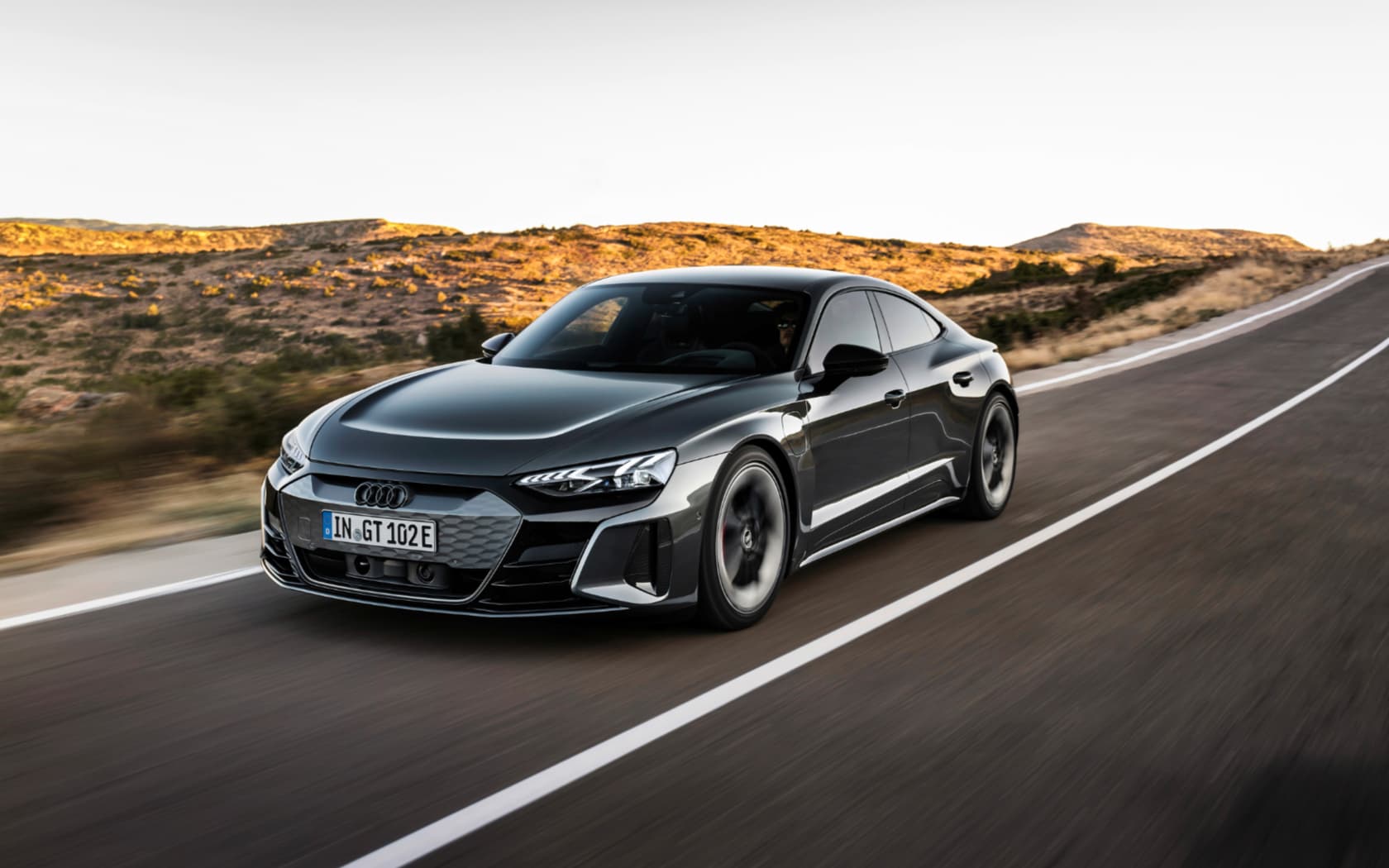 The flip side is that rival automakers, most conspicuously Tesla, remains well ahead on range. A new Model S Plaid, for example, not only beats both the Audi and Porsche EVs with its 1,020 horsepower from three motors, but still promises an estimated 390 miles of EPA range. 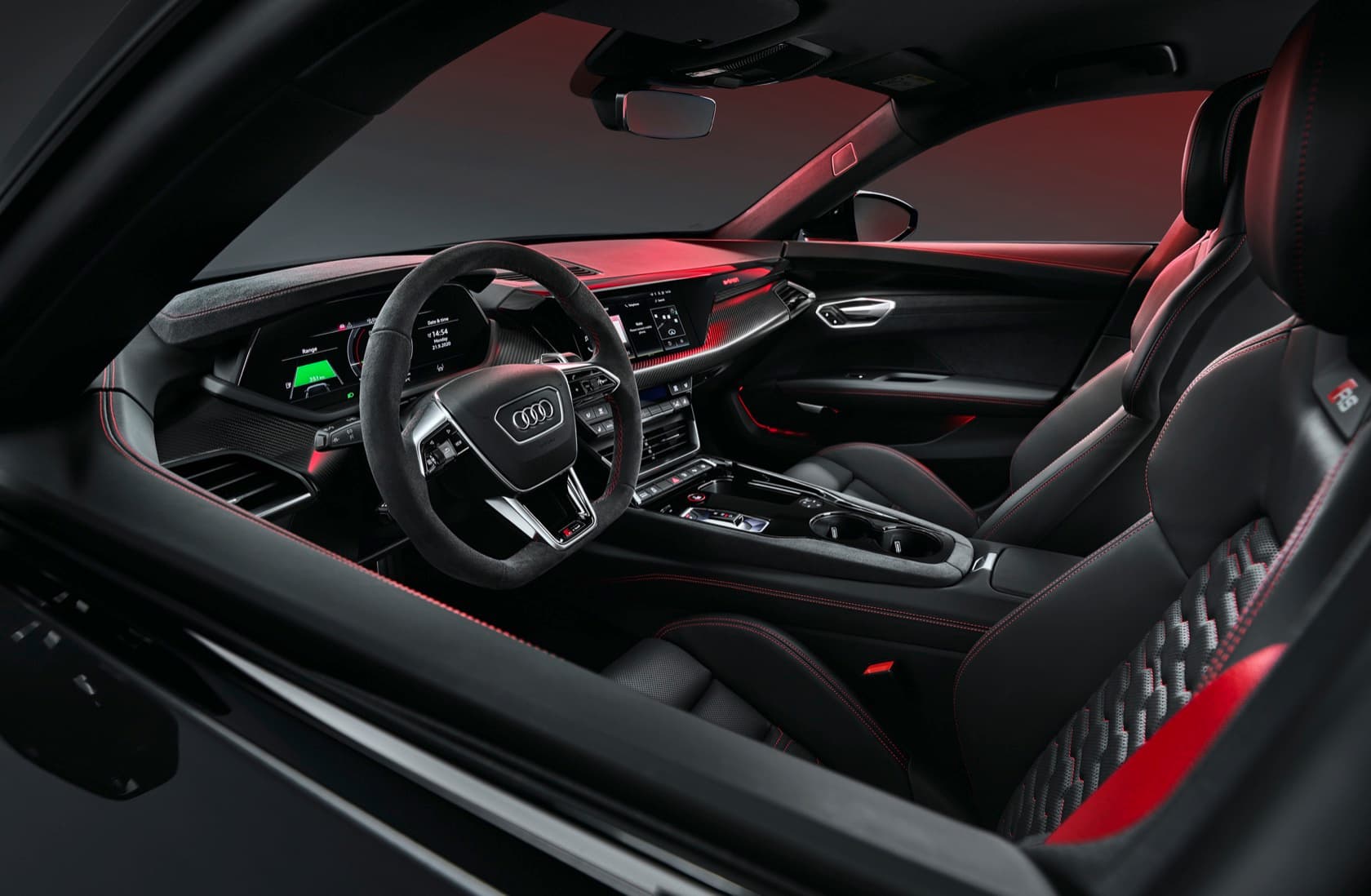 For charging, Audi is relying on its 270 kW support and 800V architecture to keep the 93.4 kWh battery that will be standard on US-spec e-tron GT models topped up rapidly. Find the right charger – such as an Electrify America model – and you’re looking at 5-80 percent in 22.5 minutes, the automaker claims. 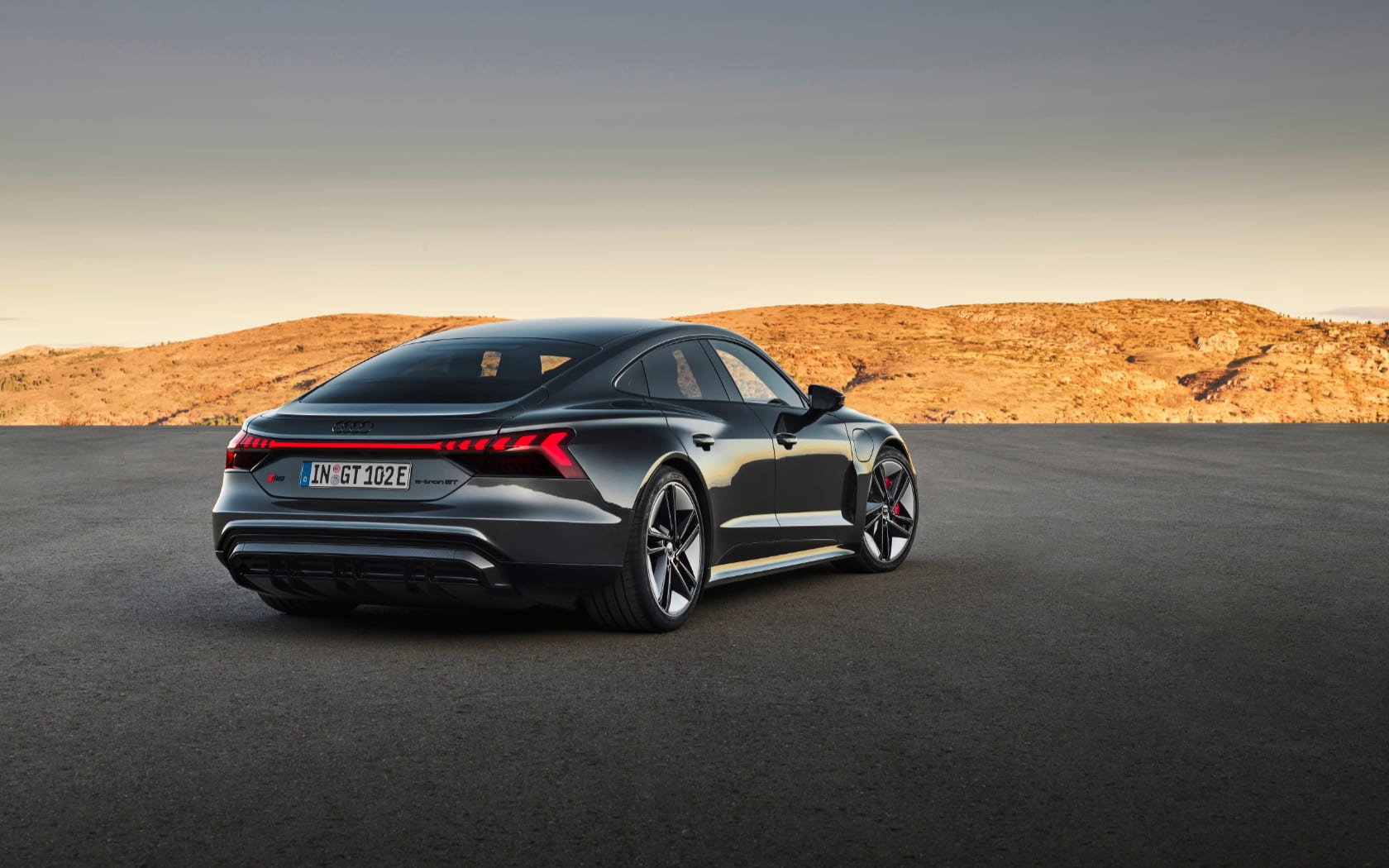 We’ll confess, we expected Audi’s seductive electric flagship to be six-figures out of the gate, and not low six-figures either. Starting at $99,900 (plus destination, but before any EV incentives), the e-tron GT quattro Premium Plus just scrapes in under that, though the gap widens if you’re eligible for the full $7,500 US federal tax incentive. The 2022 e-tron GT quattro Prestige starts at $107,100.

As for the potent 2022 RS e-tron GT, that comes in a single trim. It’ll be $139,900 before options, destination, and incentives: certainly not cheap, but a far cry nonetheless from the Taycan Turbo’s $150,900 sticker.