This is the new Tesla Model S

Tesla has redesigned the Model S, its electric sedan, with a new interior and even more range on offer. The upgrade includes new battery modules, battery packs, and drive units, Tesla said today, complete with an entirely new interior. The automaker is also reworking its Model X SUV, it says.

It’s a welcome revamp for what is the oldest EV that Tesla currently sells. The Model S was certainly groundbreaking when Tesla first launched it, and not only for its reliance on all-electric propulsion: its touchscreen-dominated dashboard went on to arguably set expectations for what a modern car interior should look like.

Tesla built on that with the Model 3 and Model Y, its more affordable models, and in comparison to their minimalistic lines the Model S’ interior looked positively fussy. That’s all being upturned today, with the reveal of the new Model S cabin that Tesla says it’s been preparing its Fremont factory to build.

It’s definitely unique. The steering wheel has been cut down to a pared-back rectangle which Tesla calls the yoke, similar to what we’ve seen Tesla show before on the second-generation Roadster. That has simple controls built-in – a pair of scroll wheels flanked by buttons for indicators, lights, and multimedia control – with a dedicated 12.3-inch driver instrumentation display behind.

In the center console, meanwhile, there’s a full touchscreen for controlling the infotainment system. As in the Model 3, it’s oriented horizontally, a change from the Model S’ vertical touchscreen. Beneath it there’s cubbies along with a wireless charging pad for phones.

The 17-inch center display has a 2200 x 1300 resolution now, and can be tilted from left to right depending on visibility needs. Tesla says the onboard processing is good for up to 10 teraflops of power, which can be used for in-car gaming. There’ll be support for wireless controllers, too. 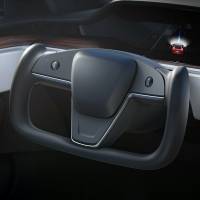 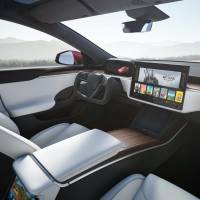 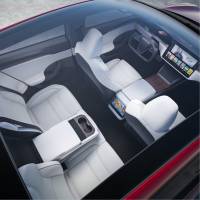 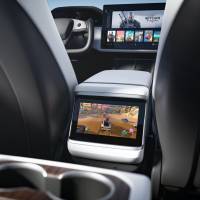 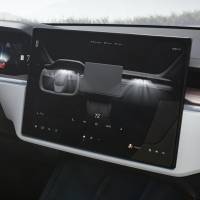 Overhead, there’s a full glass roof as standard, which uses infrared and UV blocking to avoid heat and glare. Meanwhile, there’s a 22-speaker, 960 watt audio system for music, with microphones embedded for active noise canceling. Each seat gets heating, as does the steering wheel and the windshield; front seats also get ventilation.

Tri-zone climate control with HEPA air filtration is standard, as is ambient lighting. Custom driver profiles are supported, and the power liftgate and power folding side mirrors are standard too. Wireless and USB-C fast charging is fitted for each passenger. Buyers of the new Model S get a year’s Premium Connectivity bundled, with live traffic, satellite view maps, music streaming, internet browser, and video streaming with access to services like Netflix, Hulu, YouTube, and Twitch.

The dashboard as a whole is far cleaner, with Tesla’s invisible air vents system for the HVAC. In the rear, meanwhile, there’s now a second, 8-inch touchscreen display presented at the back of the center console. That’s used to control things like climate control and other settings. 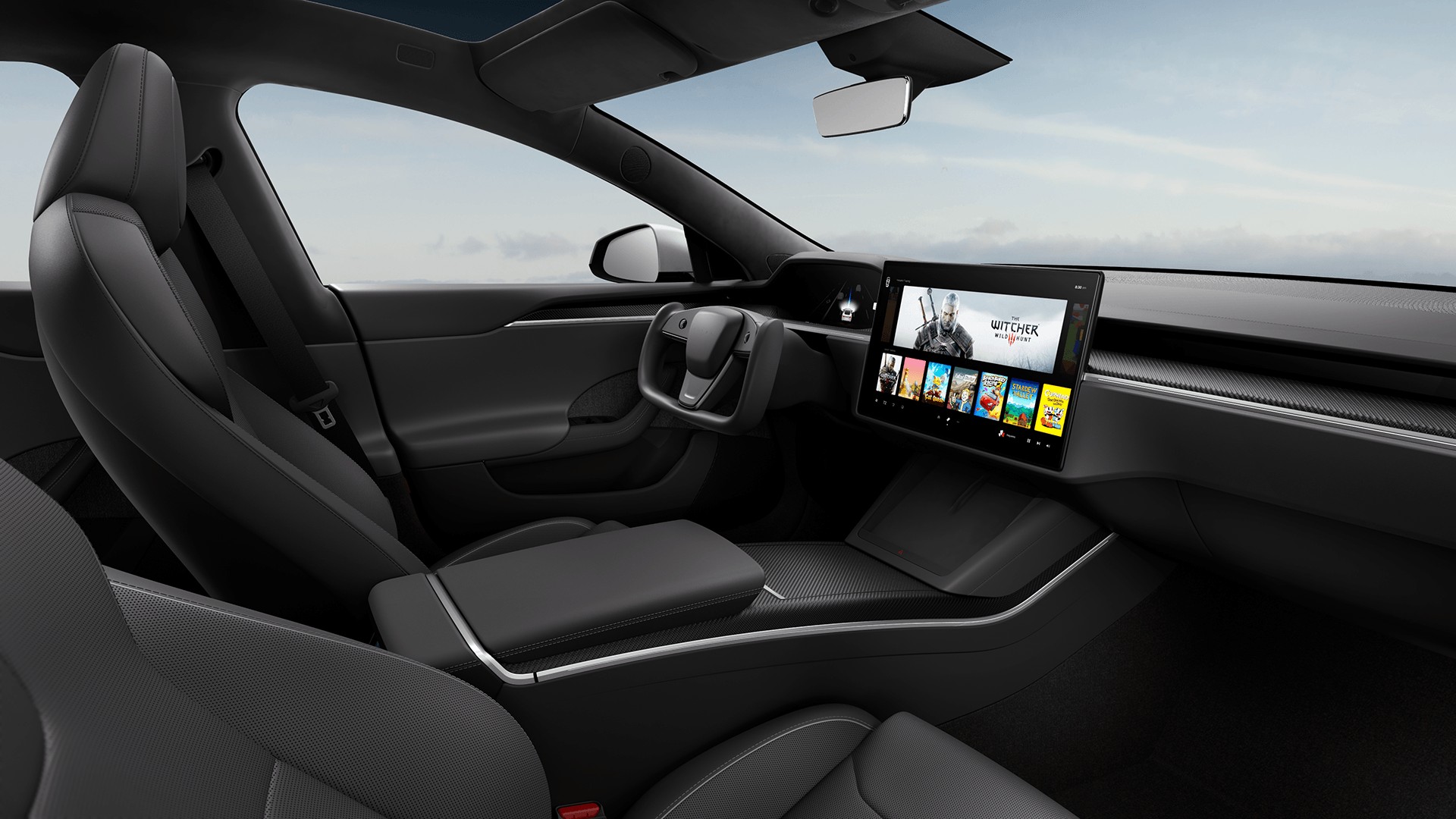 Outside, the changes aren’t quite so dramatic, though it’s still a different look to the Model S we’re familiar with. The big difference is the arrival of the redesigned Model S Plaid, its most potent version of the EV. That, the automaker says, should be capable of doing 0-60 mph in under 2.0 seconds, the quarter mile in under 9.3 seconds, and a top speed of 200 mph. It starts at $119,990 for the Plaid with 390 miles of range, or $139,990 for the Plaid+ with a whopping 520+ miles of range. The new Model S Dual Motor All-Wheel Drive Long Range – which can do 412 miles – starts at $79,990

Under the sheet metal, the changes have been led by advancements made for the Model 3 and Model Y, Tesla says. “While our Model S and Model X battery module architecture evolved over the past 8 years, both the battery pack and modules have now been fully redesigned,” Tesla says. “Additionally, we have incorporated Model 3 and Model Y motor technology throughout as well as our heat pump for better winter range.” 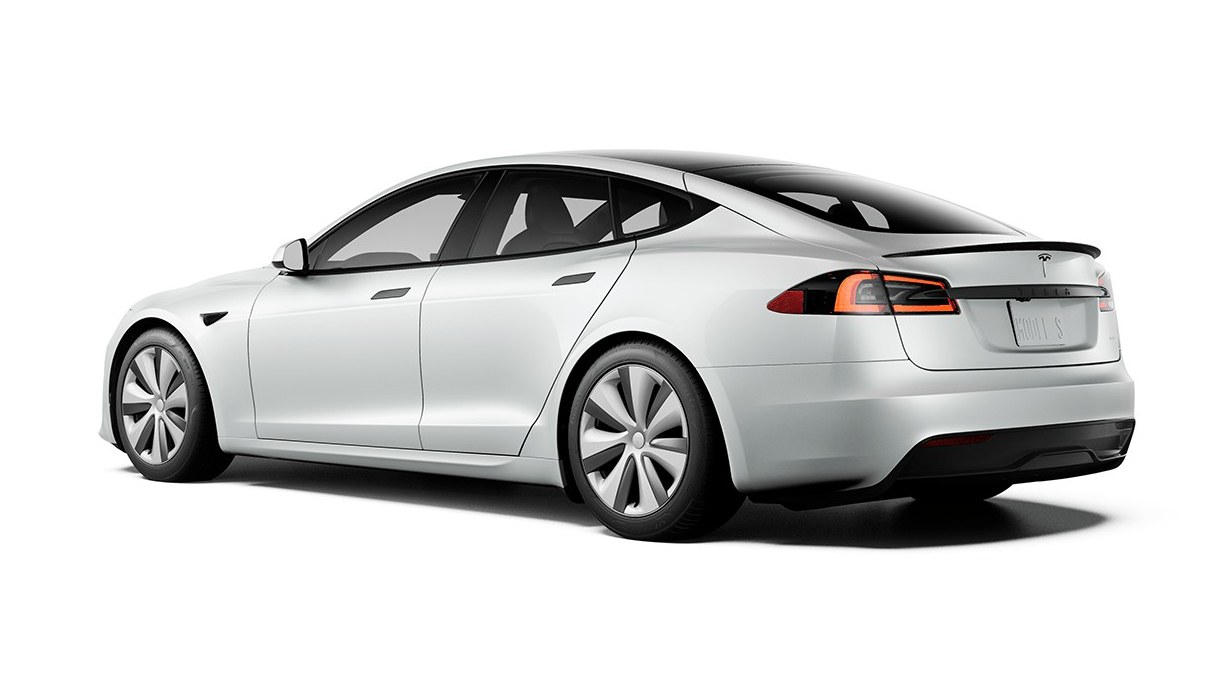 The changes also help with high-speed quarter-mile runs, Tesla claims, with an apparent 5x improvement in how many can be carried out. The Model S and Model X Performance models have been replaced by the Plaid trim, with its tri-motor configuration. The controversial “Full Self-Driving Capability” package is $10,000.

Production of the new Model S and Model X will resume later in Q1 2021, Tesla says, “and ramp back to full capacity over time.” According to the online order system, new orders should ship from March for the Dual Motor All-Wheel Drive and Plaid, and late 2021 for the Model S Plaid+.