It’s hard not to feel sorry for the Volkswagen Golf. Perennially overshadowed by its sportier, more eye-catching Golf GTI sibling, the “regular” car doesn’t have the punchy performance or indeed the badge cachet, but hangs its appeal on value instead. As the 2021 Golf TSI prepares to close the books on Mk7 production, it turns out that’s still an unexpectedly compelling argument.

The new 2022 Golf Mk8 brings with it new styling, new GTI and Golf R models with up to 315 horsepower, and a sizable tech upgrade for the cabin. Meanwhile, it’s hard not to feel like the lion’s share of VW’s attention has already shifted to its electrification strategy, with the ID.4 crossover EV already on American shores and subsequent zero-emissions models not far behind. 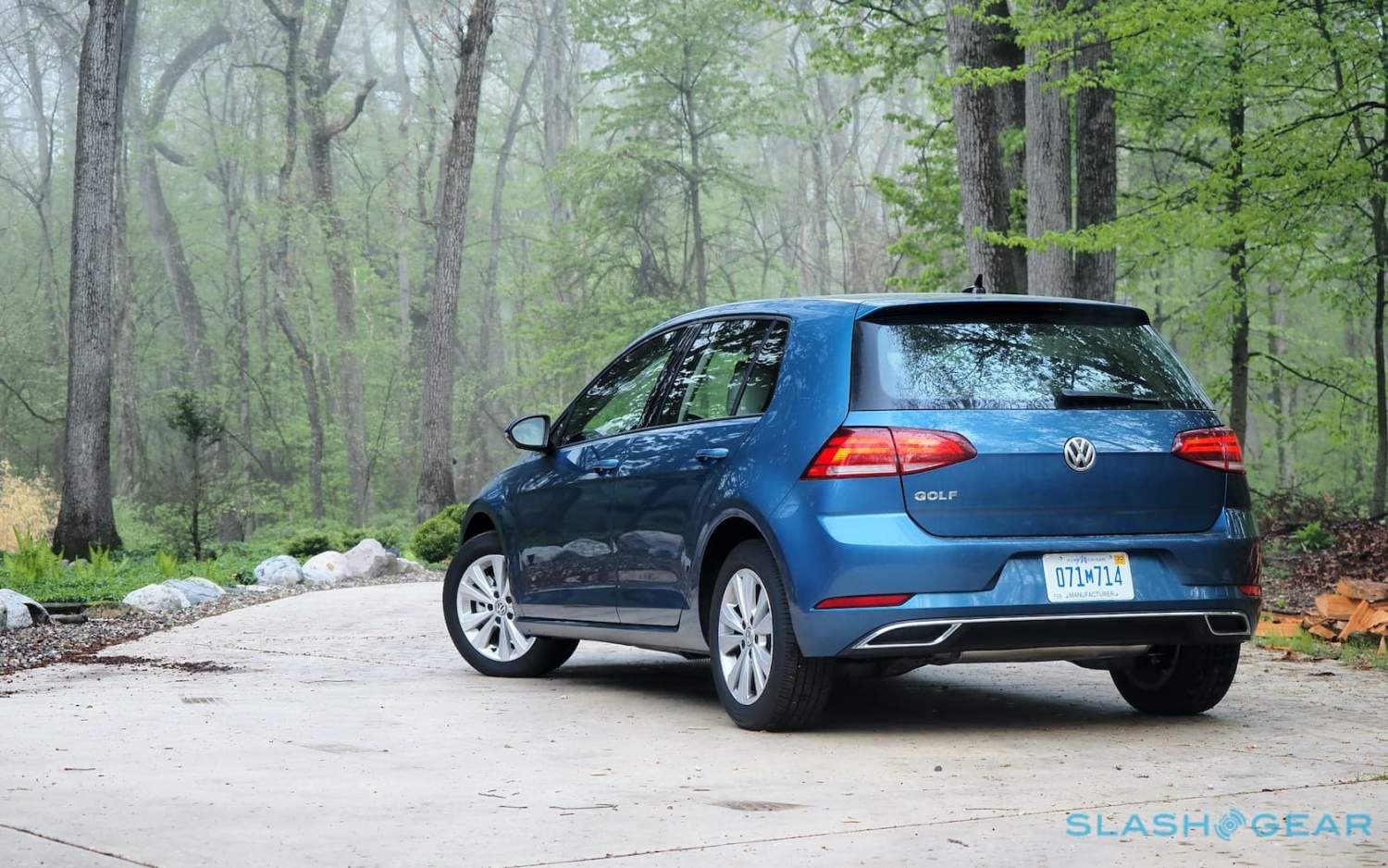 Where, then, does that leave this 2021 Golf TSI? Sole remaining non-GTI trim for North America, Volkswagen is upfront about the fact that it’s a value play. $23,195 (plus $995 destination) gets you the six-speed manual version, while the eight-speed automatic trim you see here kicks off at $23,995 (plus destination). 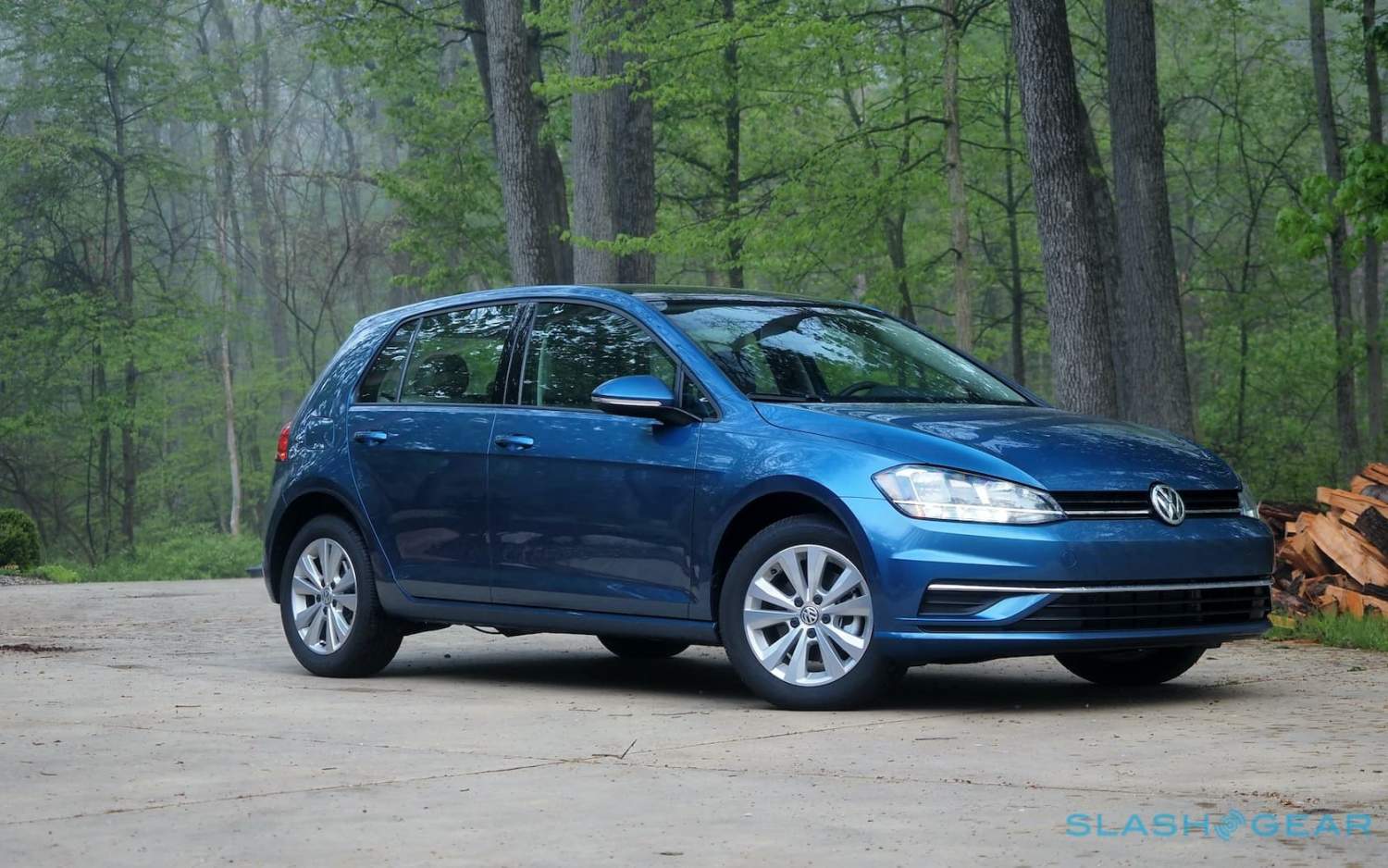 Regardless of gearbox you get VW’s 1.4-liter turbocharged four-cylinder gas engine, with 147 horsepower and 184 lb-ft of torque. It’s not, it’s fair to say, the most powerful engine in a hatchback, but that needn’t damn it out of the gate. In fact, given just how good the Golf’s chassis and suspension tuning is, it becomes a renewed reminder that horses aren’t everything. 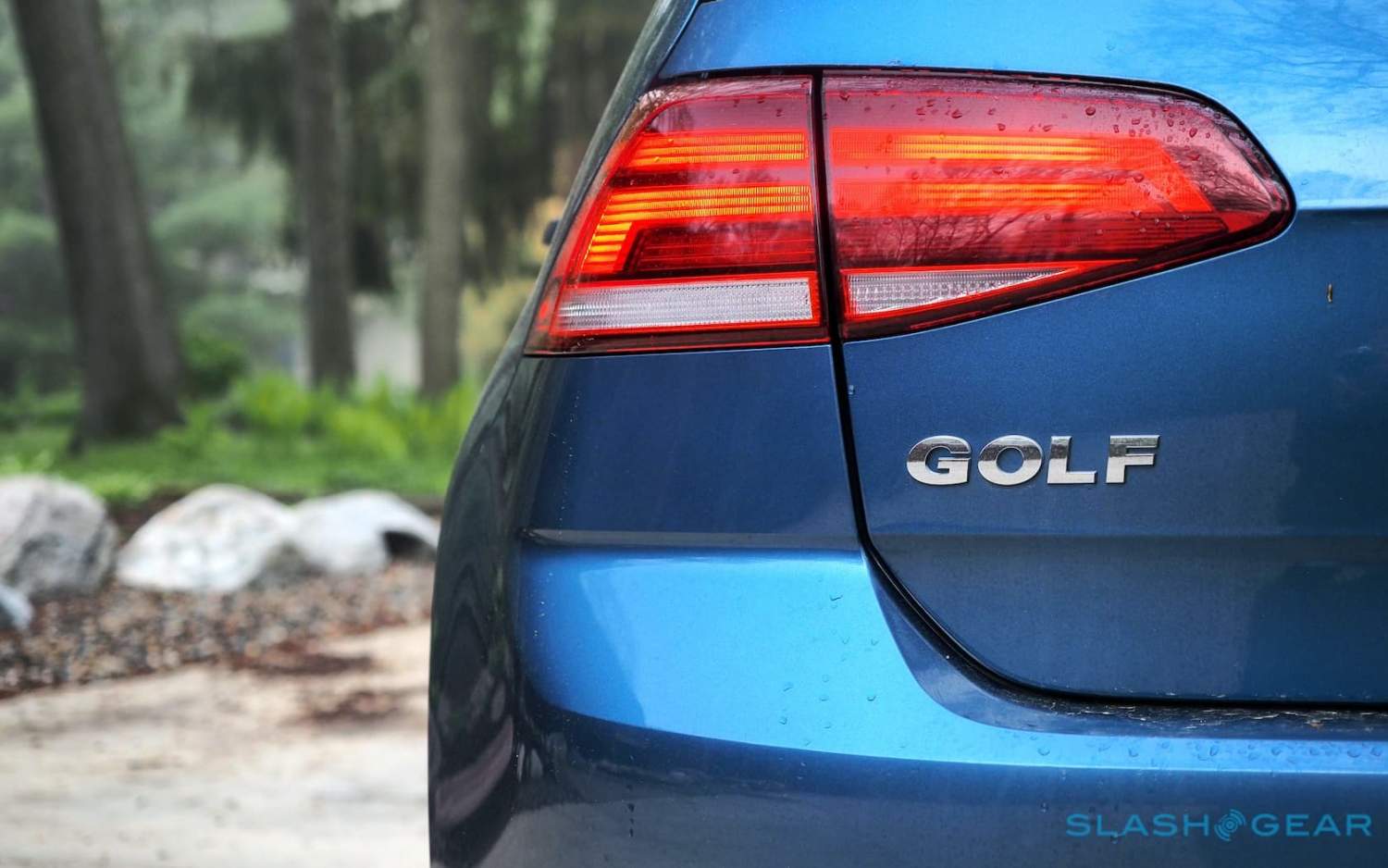 It’s not as firm as a GTI, because Volkswagen doesn’t expect you to take on canyon roads as though you’re a rally driver, and the ride quality and day to day usability are all the better for it. There’s no shortage of perkiness for urban duties, and things get even more spritely when you tug the shifter back again and into Sport mode. That massages a little more urgency into the throttle tip-in, while also holding the gears a little longer. 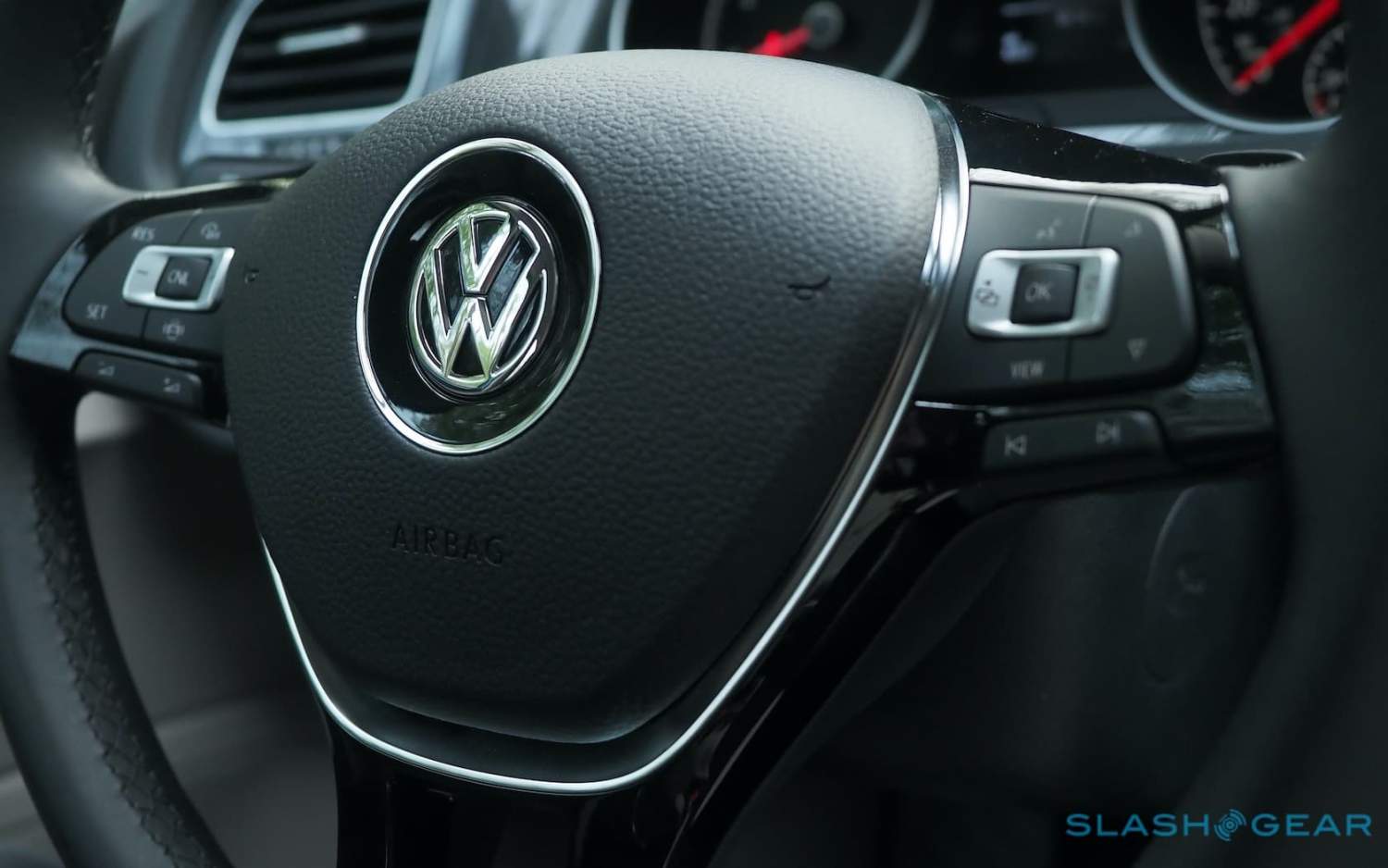 We’re talking sportiness by degrees, here, but wind the Golf TSI up and there’s the potential for some fun. The handling can more than keep up with the power on tap, meaning you’ll likely run out of grunt before reaching any other limit, while the steering is pleasingly direct. Peak torque arrives at an accessibly-low 1,600 rpm, sticks around until 3,500 rpm, and means you generally find yourself slap in the middle of the Golf’s sweet spot. 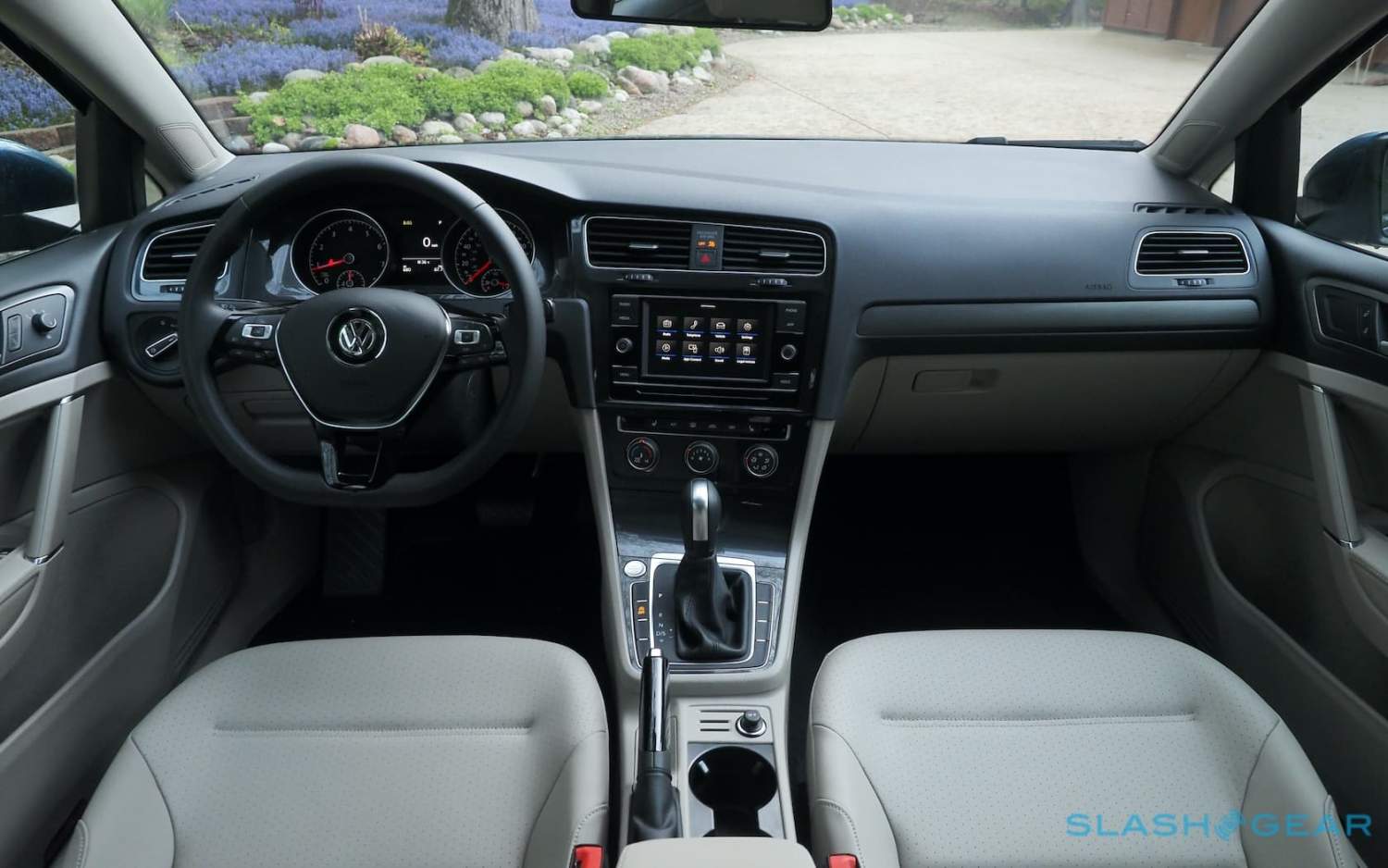 Bring all that together, and there’s more than the on-paper numbers might suggest. The same goes for the general cabin feel, where VW has simplified things to the point that there’s basically one configuration in a choice of two colors. 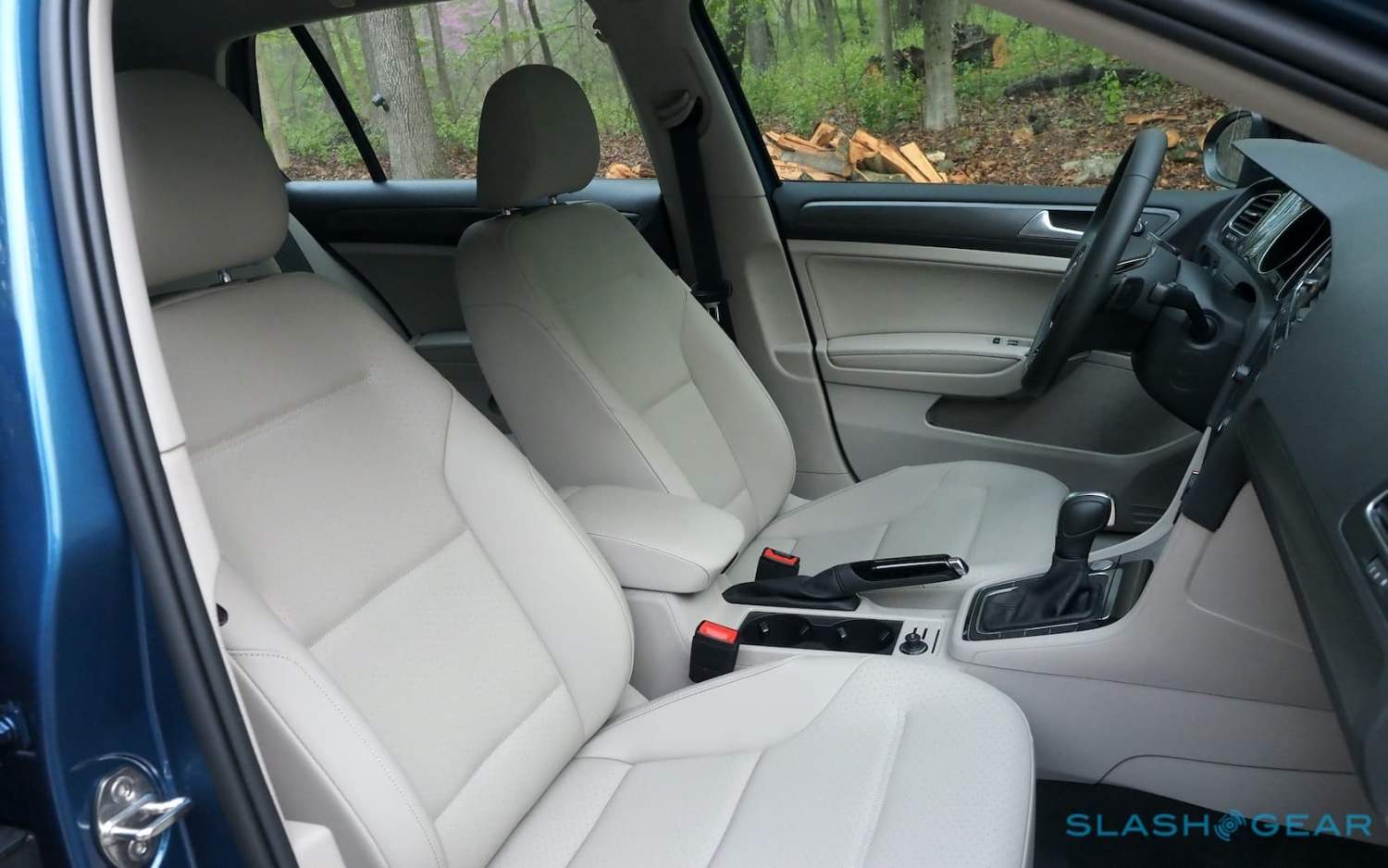 It means you get leatherette seats, keyless entry and push-button start, a panoramic sunroof, heated front seats, and manual climate control as standard, along with blind spot warnings, forward collision warnings with emergency braking and pedestrian detection, and automatic wipers. Then again, it also means you can’t upgrade the cruise control to adaptive cruise, or the manually-sliding front seats to full power versions. 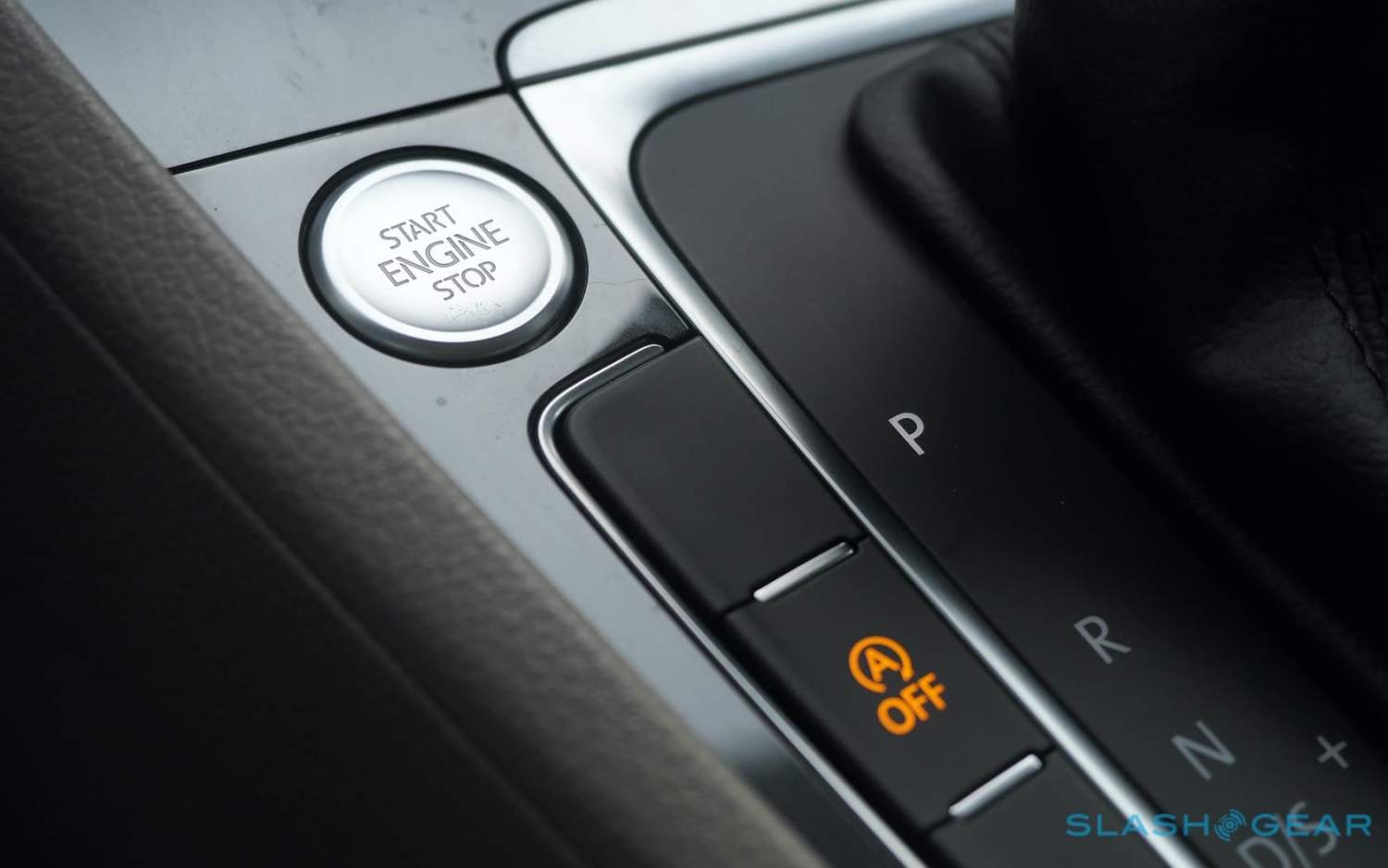 Nor, too, is there any way to change the standard 6.5-inch touchscreen with its 6-speaker audio system, single USB-C input, and support for wired Apple CarPlay and Android Auto. It’s not a big display, and there’s a paucity of ports in general, while the audio isn’t going to blow anybody away. Still, it’s easier to stomach than the tiny monochrome driver display sandwiched in-between the analog gauges, which feels positively archaic in 2021. 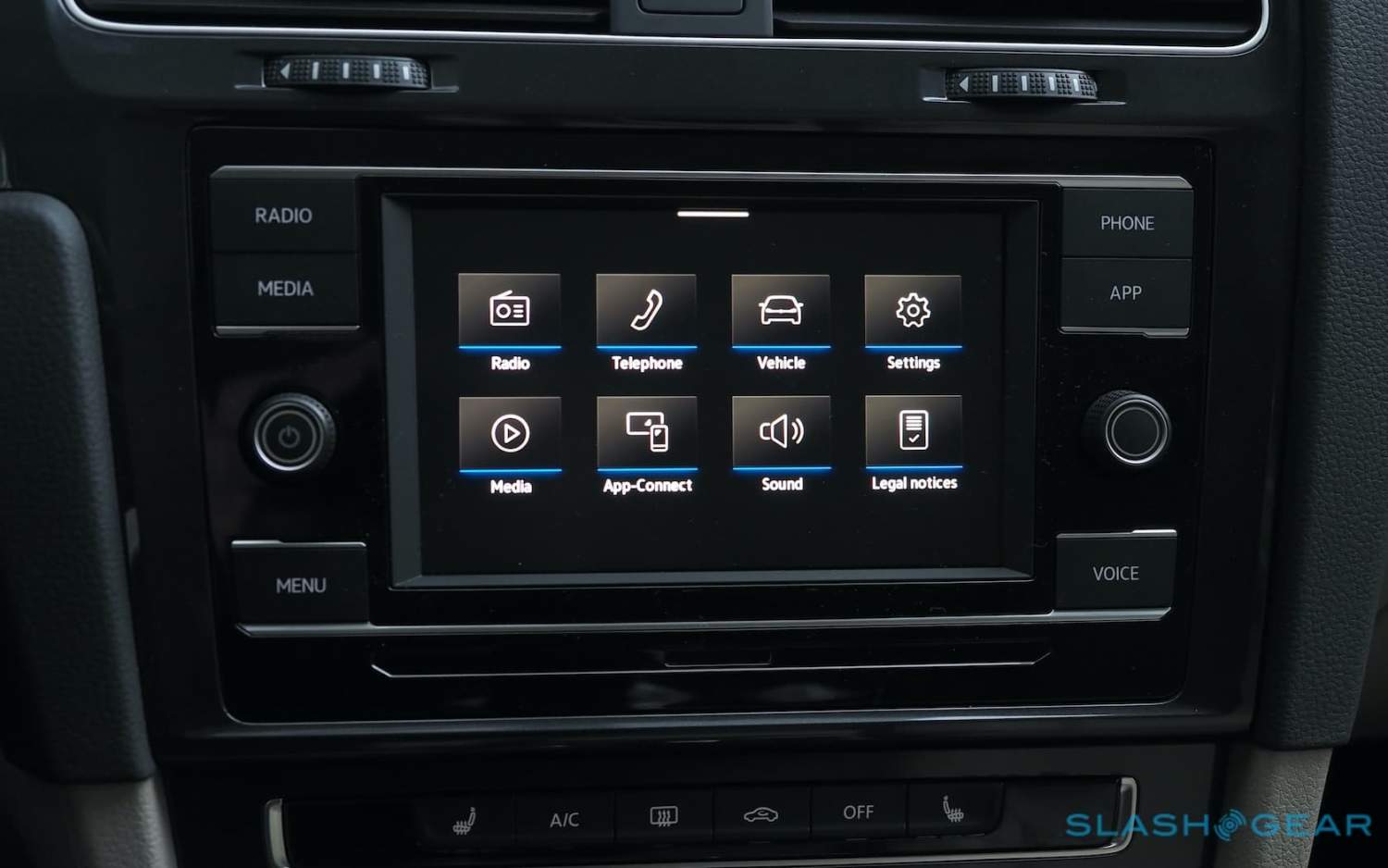 Things do, at least, feel sturdy and well constructed. Honestly, I wish VW had opted for some of its more engaging fabrics instead of faux-leather for the seating, but everything is comfortable and the majority of places your fingers will come into contact use soft-touch plastics. It has that distinctive, semi-austere feel that Volkswagen seems to enjoy so much: an approach to anti-design that flirts with borderline masochism. 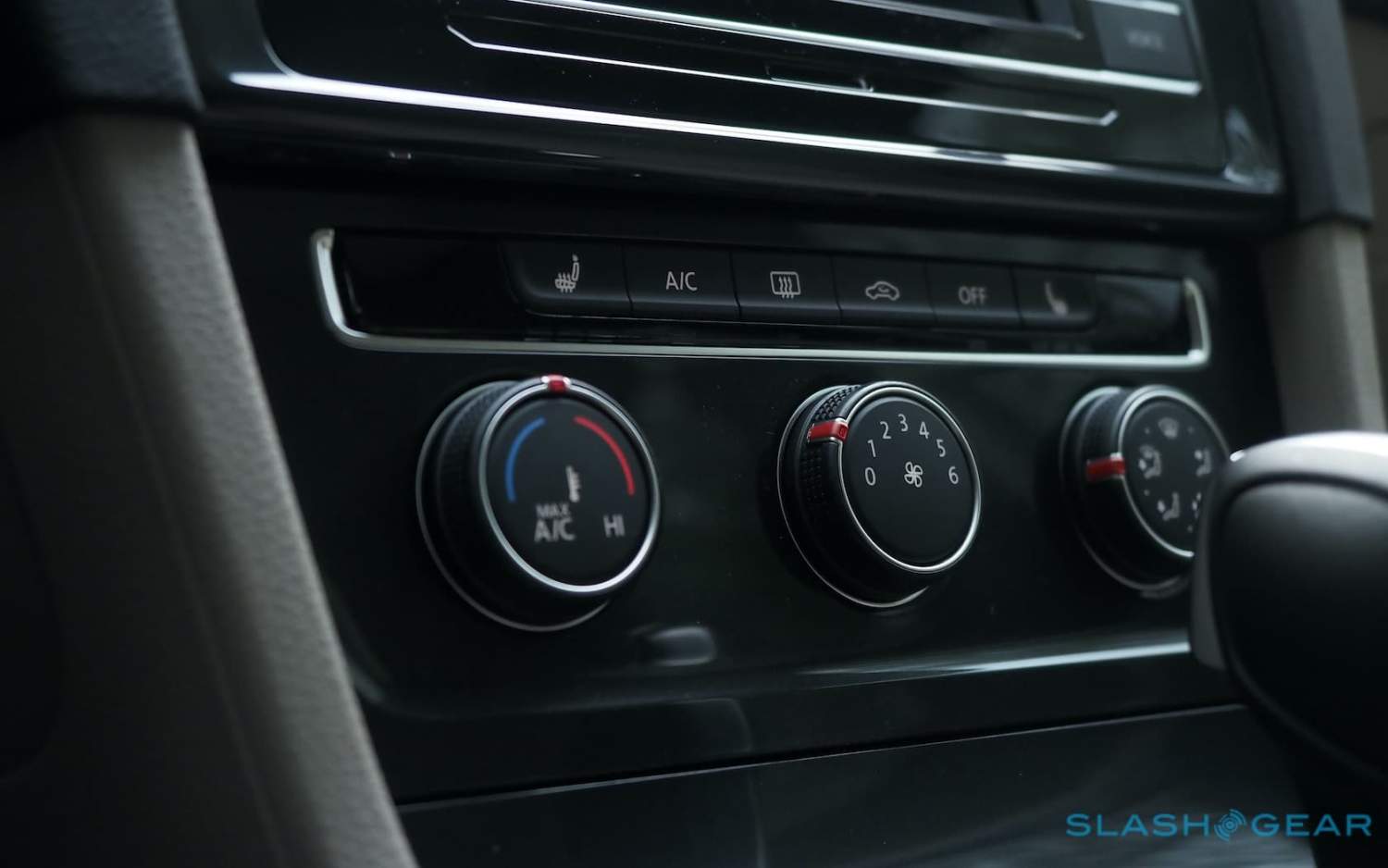 Then again, maybe other cars cosset us too much for our own good. In that case, the Golf’s now-familiar exterior aesthetic feels like a barely-sweetened medicine: palatable, if not something you’ll necessarily look forward to. 16-inch alloys are standard, their design simple and earnest, along with LED lights front and rear. Compared to rivals, most of which have embraced more curves, creases, slashes, and scorings than is perhaps wise, the VW feels restrained and sober. It’ll age, like every Golf before it, with a hewn grace, even if it doesn’t turn heads on the daily. 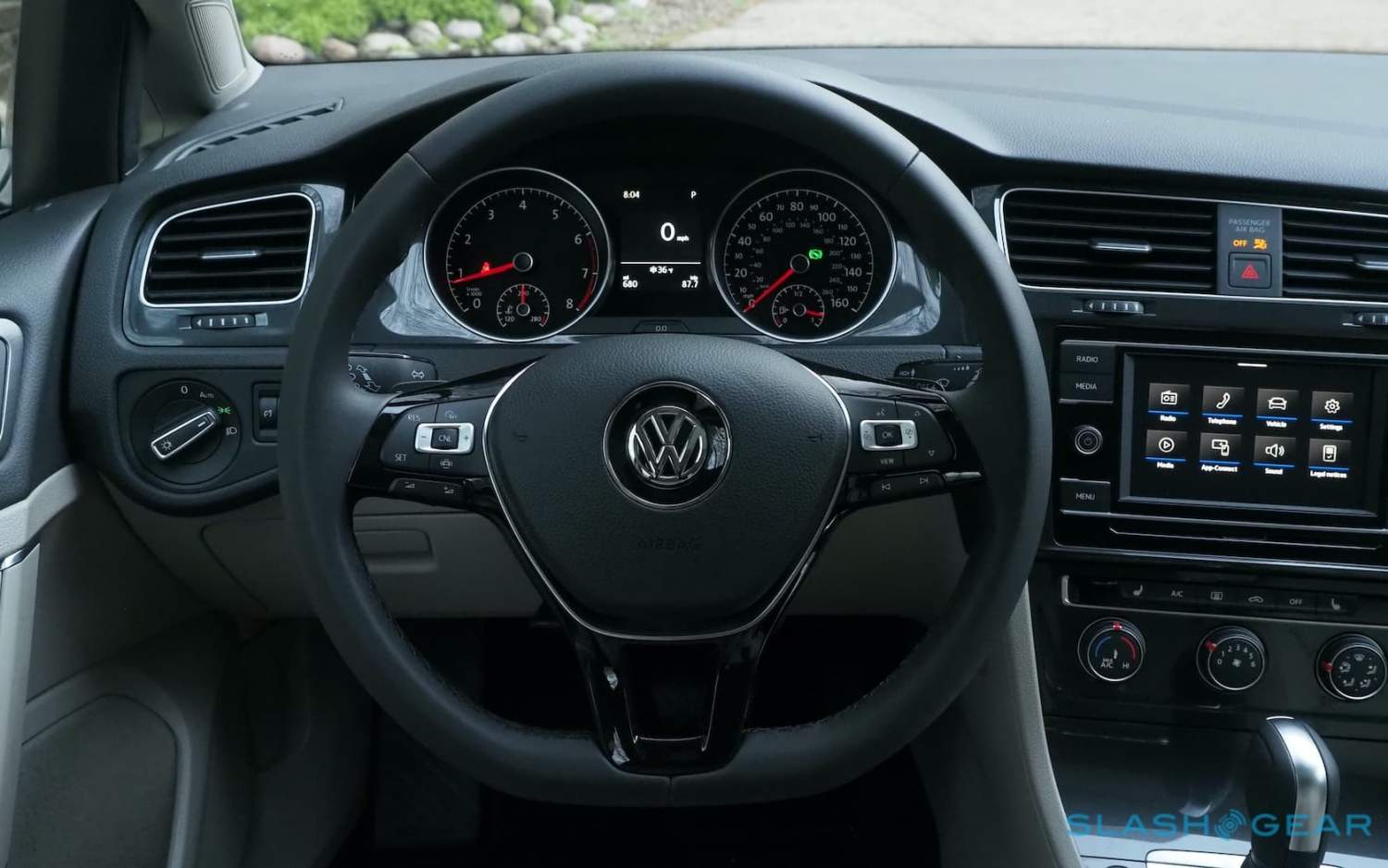 From behind the wheel, though, you’ll probably be more focused on the excellent frugality. The EPA says the automatic Golf TSI should do 29 mpg in the city, 36 mpg on the highway, or 32 mpg combined; the manual does a little better. In my regular driving, though, I nudged past 36 mpg, and it wasn’t like I was holding myself back.

Similarly practical is the cabin and cargo space. Adults will have no complaints either in the front or the rear, with head and legroom plentiful. In the trunk there’s 17.4 cu-ft to play with, expanding to 25 cu-ft with the rear seats folded.

Age works in the Golf’s favor, and and its charms grow the longer you spend with it. Still, there are obvious reasons to look elsewhere. The spartan cabin, and absent convenience and active safety tech, are where the Golf really shows its age. Honda’s Civic has a more compelling feature list, while the Mazda3 drives better. 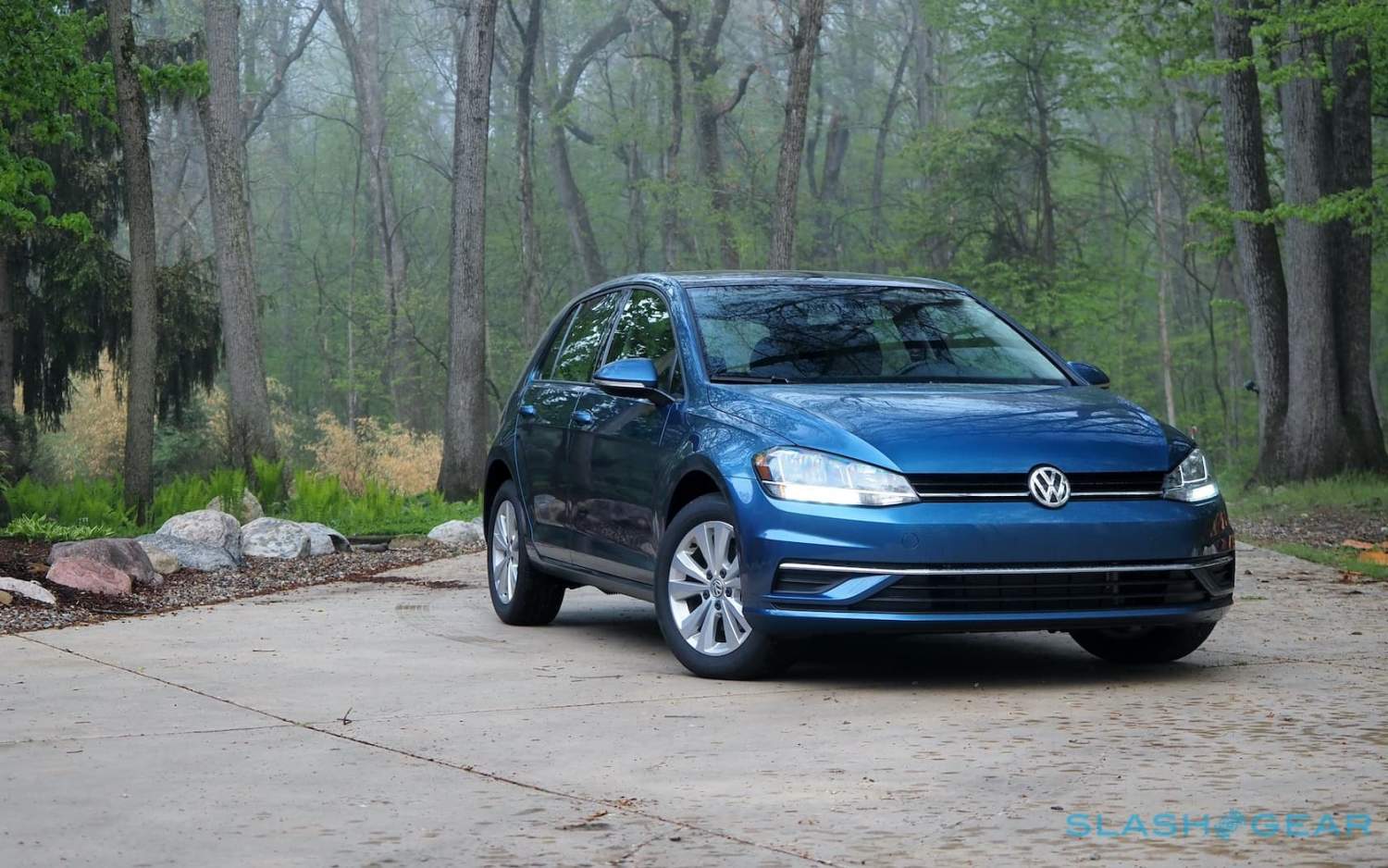 It feels unfair to boil the 2021 Golf TSI down to a decision based on frugality, however. If anything, it’s a reminder that Volkswagen’s engineers know their stuff when it comes to chassis and suspension tuning, and that the biggest horsepower number doesn’t necessarily translate to the most fun. Think of the last Golf of the Mk7 generation as a purity play, then, and it makes a whole lot more sense.