Minivans may not strum the limbic system in the same way that, say, a sports car or burly SUV might, but if the thought of cunning organization and the odd trip to IKEA sends shivers down your spine then there’s a whole lot to like about the 2021 Toyota Sienna. Completely redesigned with a hybrid-only drivetrain and bolder design, the Sienna makes no apologies for its minivan identity, and ends up all the more impressive for it.

Minivan styling typically sees aesthetics take second place to practicality. The Pacifica looks like a European high-speed train, while the new 2022 Kia Carnival pretends to be an SUV; Toyota’s influence appears to be the Cylon helmets from the original Battlestar Galactica. Strong sculpt lines along the side give it some presence and, while nobody will mistake the Sienna for anything other than the family-hauler it is, it doesn’t have some of the awkward angles that, say, Honda’s Odyssey still struggles with. 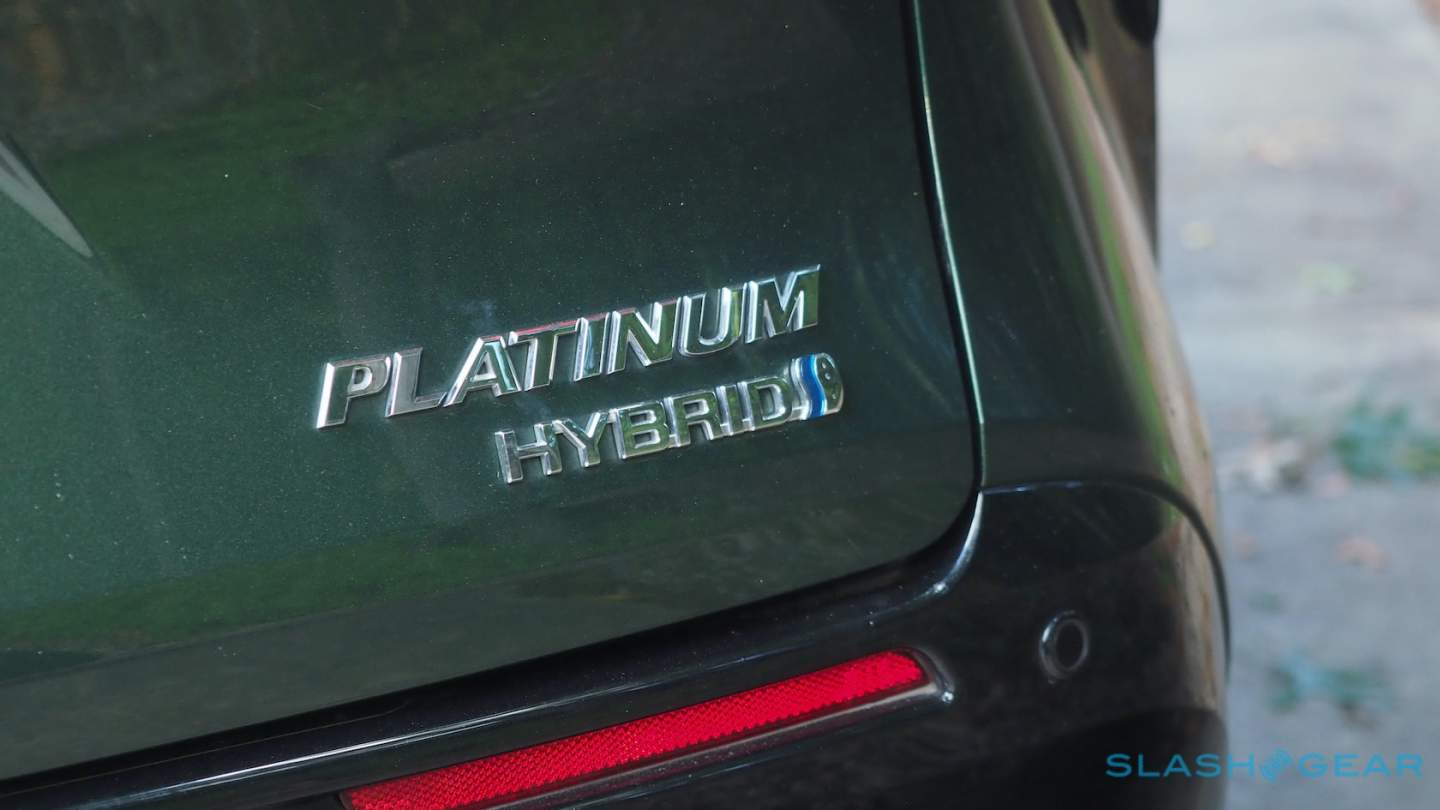 Like an outsized Prius, the new Sienna only comes as a hybrid. Toyota pairs a 2.5-liter four-cylinder gas engine with an electric motor for front-wheel drive as standard; another electric motor unlocks optional e-AWD; either way, there’s an electronic continuous variable transmission. Total system horsepower is 245 hp.

Would I prefer Toyota had made the Sienna a plug-in hybrid (PHEV) instead? Sure, but right now you face some tricky decisions if you want electrification in your minivan. Chrysler’s excellent Pacifica Hybrid is a PHEV, with 32 miles of EV range, but you can’t have all-wheel drive at the same time. If you need AWD, then Chrysler only offers it with a gas engine. 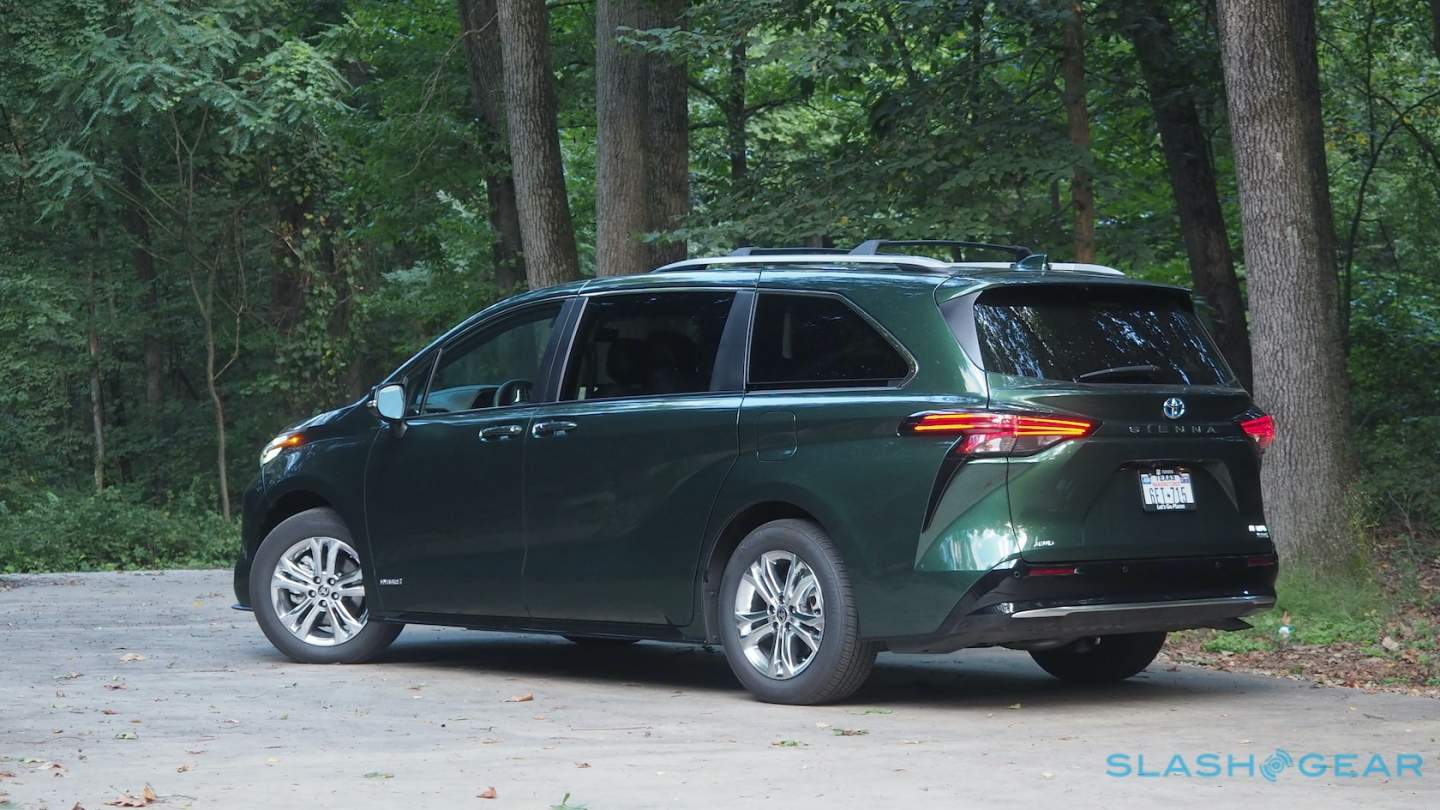 The 2021 Sienna, in contrast, may not have the same electric flexibility, but you do get optional AWD and some mighty impressive fuel economy numbers. The EPA says you should see 35 mpg in the city, 36 mpg on the highway, and 35 mpg combined. In my own, mixed driving I saw more like 33 mpg.

Yes, not quite as great as the on-paper figures, but a night and day improvement compared to the old Sienna AWD with its 3.5-liter V6. That was rated for just 20 mpg on the combined cycle. Despite the smaller drivetrain, though, the new Sienna is still rated to tow up to 3,500 pounds. 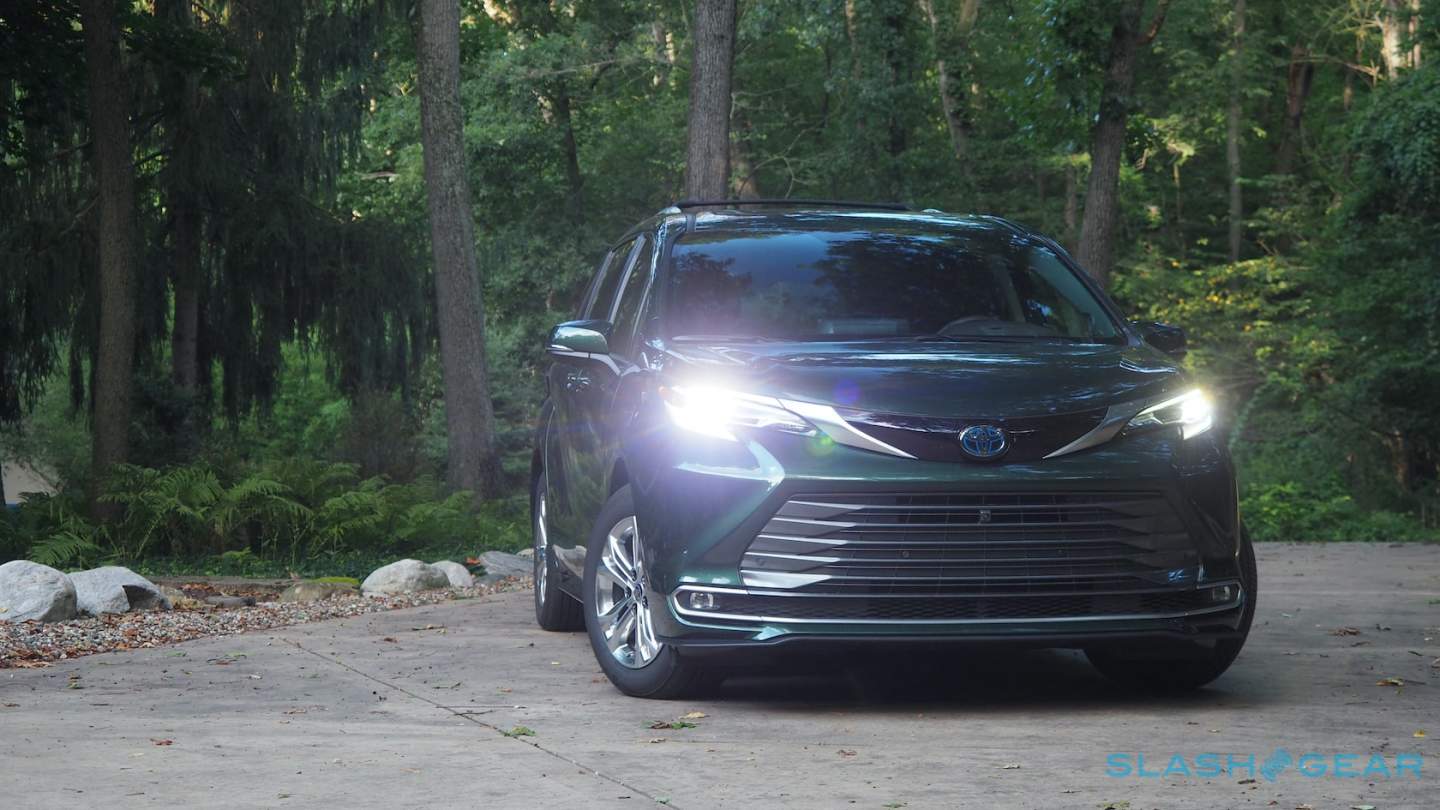 There are various drive modes, including a near-useless “EV” button which promises to lock the drivetrain to electric-only but which is rapidly overruled if you attempt to go at any real speed. Things aren’t quite so eager at highway pace, either, where the old V6’s extra 51 horses start to show their absence. The upside – beyond frugality – is that it’s a smooth and comfortable ride, with a lighter feel to the steering. Toyota’s brakes can be over-keen, however, and even after a week of driving I found things could get lurchy as I tried to modulate the left pedal.

Inside, Toyota puts practicality first. The dashboard – which is ominously sober if you opt for the black trim – is full of handy storage, including a sizable lidded bin and a huge open bay underneath. More capacious bins in the doors and in the rear should help keep families organized. Higher trims get a built-in refrigerator, and there’s an integrated vacuum cleaner available too. 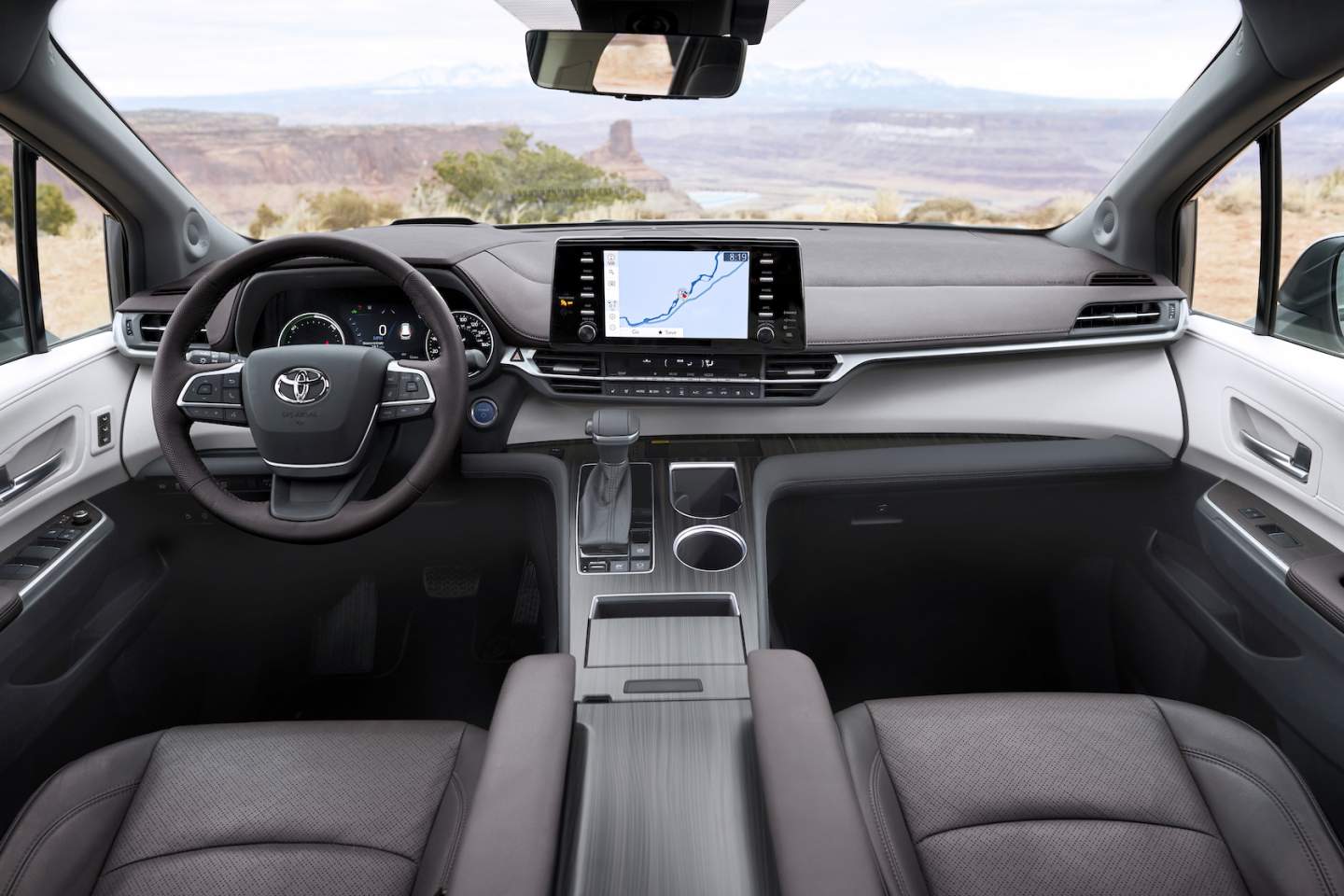 Seating for eight – albeit with the last person squeezed into a smaller center bench seat – keeps pace with the rest of the class. In most trims, though, Toyota uses captain’s chairs in the second row, with recline and fore/aft slide. They’re very comfortable but you can’t remove them, and unlike the third row they don’t fold flat into the floor, either. That third row is easy to drop down and raise back up, even without power assistance.

Do that, and collapse the captain’s chairs as much as you can, and you get 101 cu-ft of cargo space. That drops to 75.2 cu-ft with the third row flat, or 33.5 cu-ft with all the seats up. Not bad, but the 2022 Carnival offers considerably more. 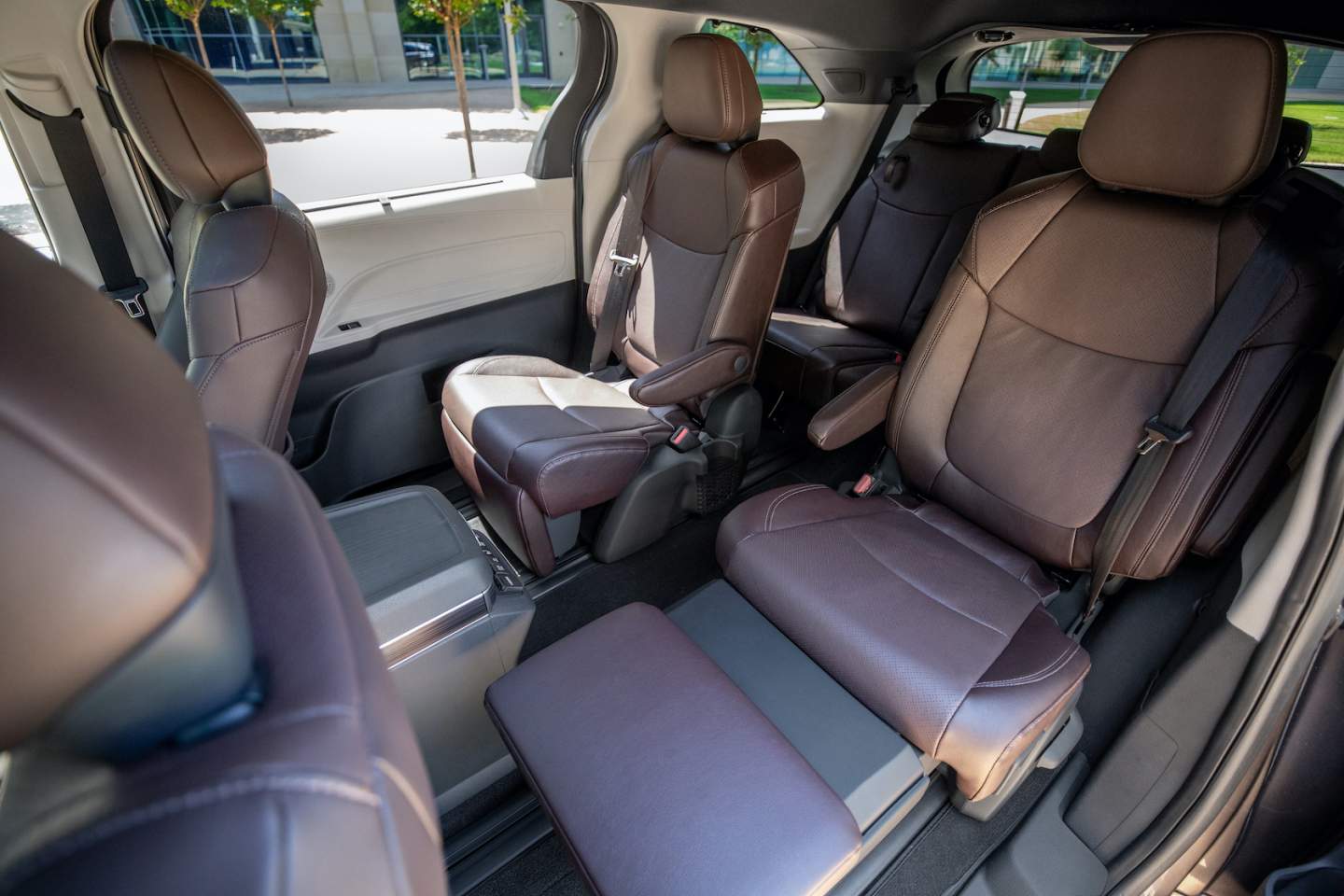 Actually accessing all that space is made easier, though, and you can tell Toyota is an old hand in the minivan segment. Not only is a power liftgate standard – and a hands-free version optional on higher trims – but all but the base trim get hands-free power sliding side doors too. Kick your foot underneath the sills and the door slides open, great if you have your hands full and can’t grab the handle or hit the buttons on the key fob.

As for tech, the entry-level LE gets tri-zone climate control, with XLE and up switching to quad-zone. A 360-degree camera is optional, while XSE and above has the Driver Easy Speak system to pipe your scoldings all the way through to the third row via the speakers. A 9-inch center touchscreen is standard, with Apple CarPlay and Android Auto; higher trims get more speakers and navigation. $300 adds a 1,500W inverter for charging your laptop or powering other devices; $1,415 adds the rear seat entertainment package with a pair of 11.6-inch screens, though I suspect most people would get more value from buying a couple of iPads instead. 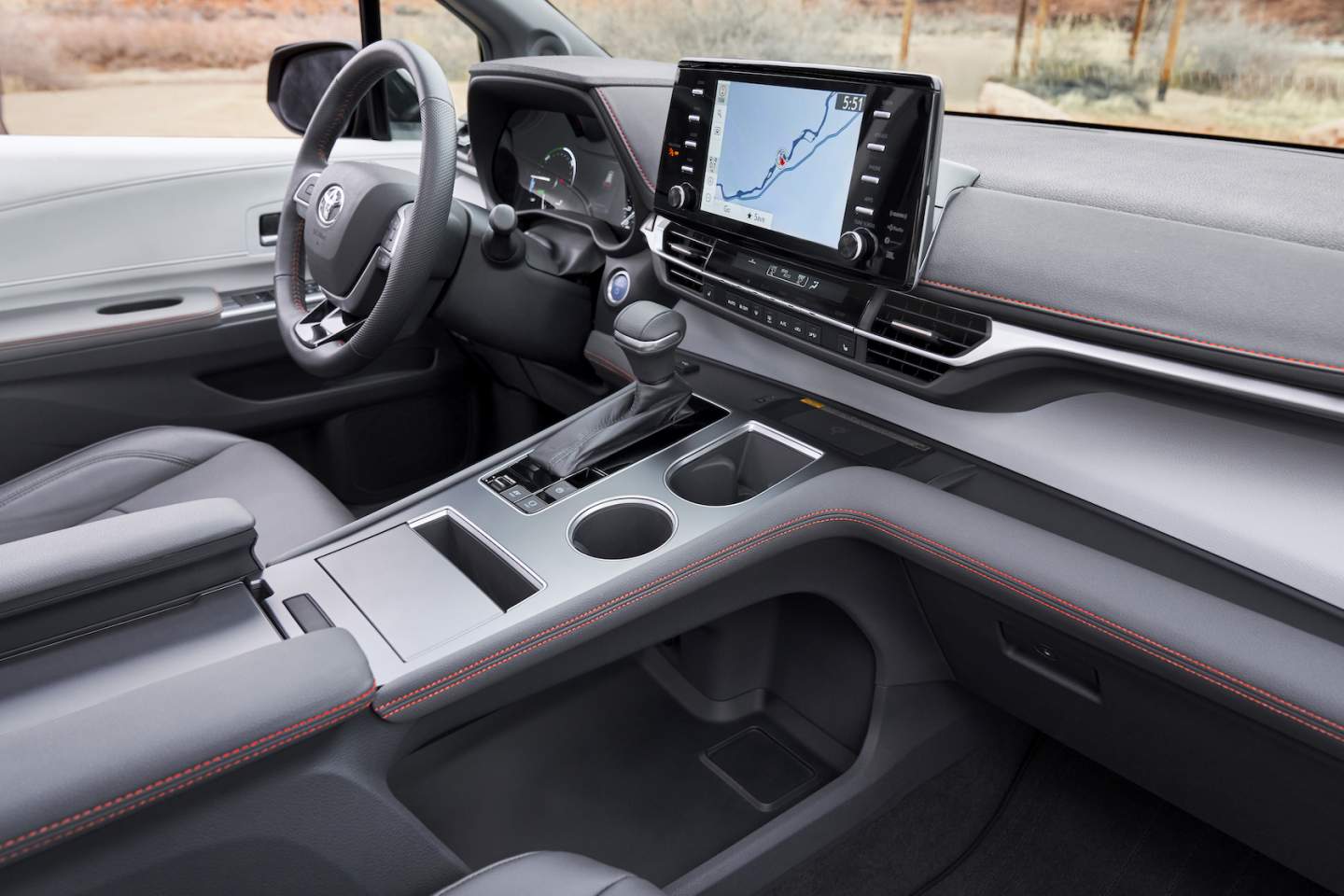 Minivans have an unfair reputation. It’s a fact of automotive life that many SUV buyers would probably be better served if they got over their hangups and opted for something like the 2021 Sienna instead. Not only is the cabin more practical and flexible, it’s easier to load and unload with the lower ride height, and the Toyota’s fuel economy is genuinely impressive for the segment too. 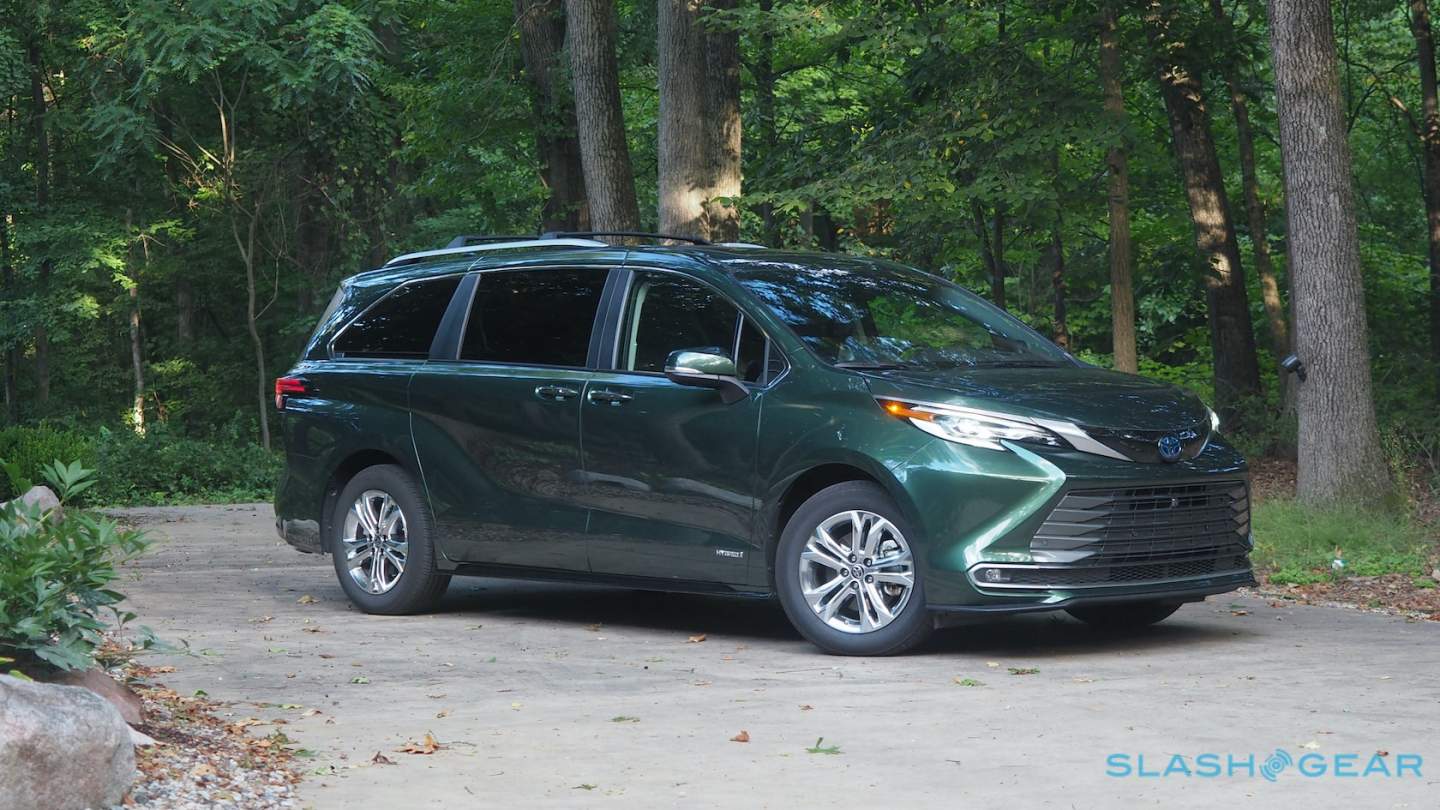 A true PHEV drivetrain would be even better, but the ability to still get all-wheel drive and hybridization is a combination other automakers simply don’t offer. My test 2021 Sienna Platinum was, pretty much fully loaded, a heady $54,553 including $1,175 destination. I suspect most would be better served with the well-equipped but much more affordable XLE trim, which starts at $39,750 plus destination.

Those who want maximum storage capacity should probably look to the excellent Kia Carnival, but the Sienna’s thoughtful features make clear Toyota is no novice in the minivan category. Factor in the excellent running costs and you can see why the Sienna is a perennial favorite, and this hybrid-first update is unlikely to change that.