I would rather own a 2021 Chrysler Pacifica AWD than most burly three-row SUVs with similar price tags, and I think you should want one too. It’s not being intentionally contrary these days to voice some affection for the minivan, almost as overlooked as the wagon but arguably far more practical than the SUVs and crossovers which currently dominate North American vehicle sales.

I get it, there’s a fog of “uncool” still casting its shadow over minivans, not to mention the memory of early iterations in the segment. Back then, “mini van” was most definitely the approach: take something that would’ve been content hauling a pallet of bricks, and instead bolt in some seats and strap in a full brood of kids. 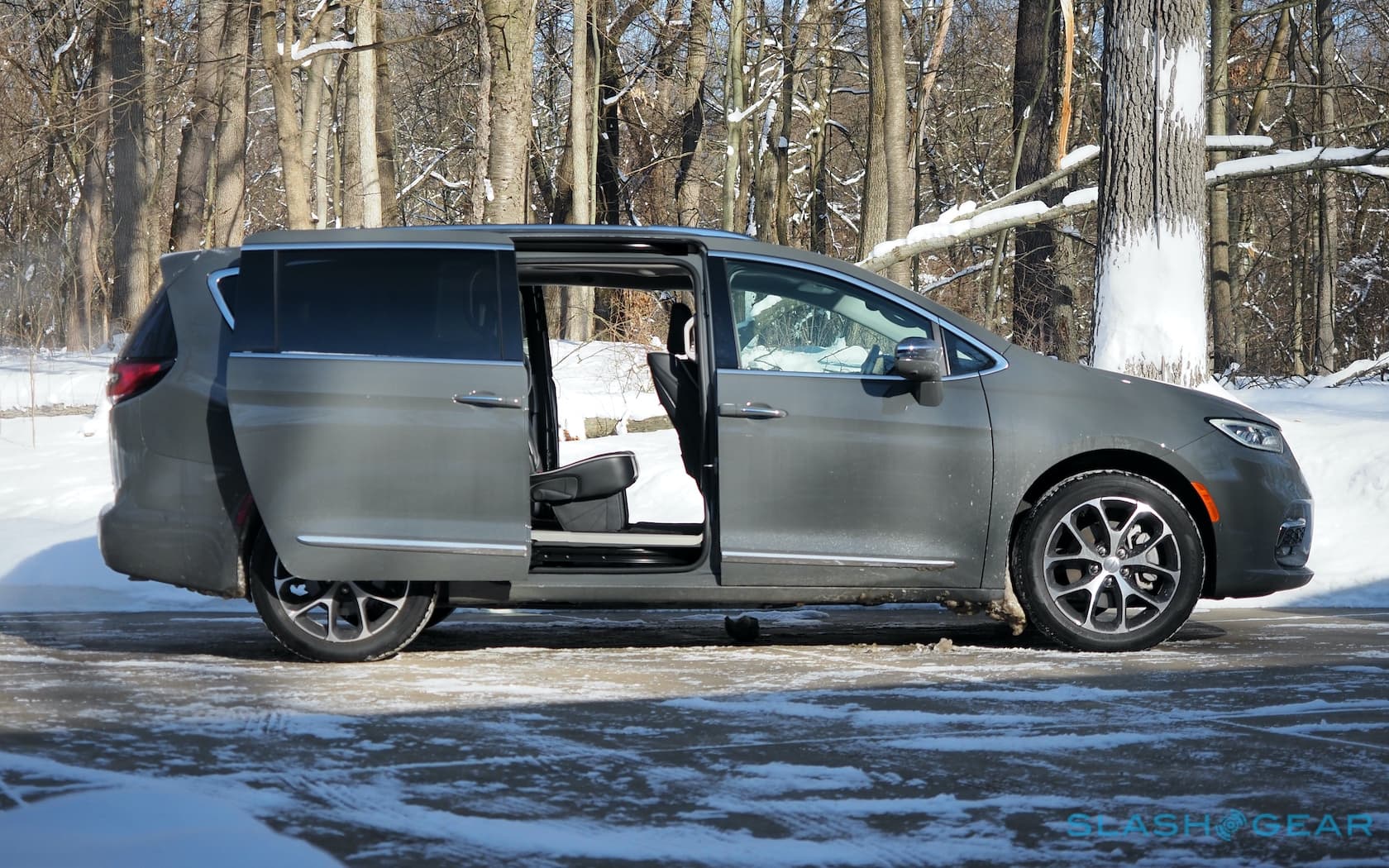 These days, though, minivans are a whole lot smarter, and there’s a practicality balance you can’t really ignore. In the case of the 2021 Pacifica Limited, for instance, there’s space for seven inside, accessed by the no-really-they’re-sexy power sliding doors on each side. There’s 32.3 cu-ft of cargo space with all three rows up, but that expands to a whopping 140.5 cu-ft with them down. We’re talking serious usability for your $48,390 (plus $1,495 destination). 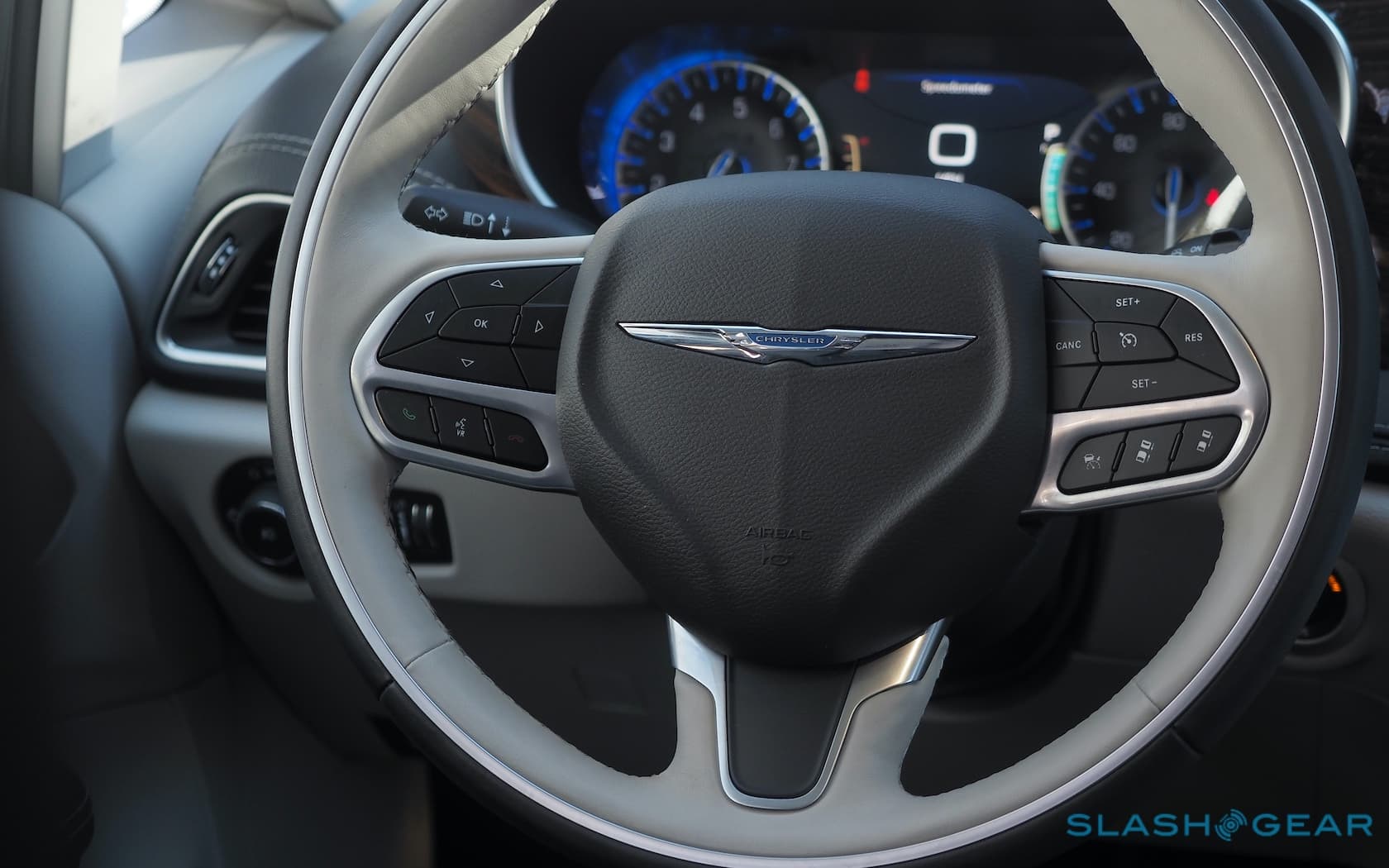 The glaring absence in the Pacifica line-up was all-wheel drive, something Chrysler addressed for the 2021 model year. It may have taken a while to arrive, but the automaker didn’t do it by halves. The Pacifica’s AWD can push all of the 3.6-liter V6’s engine’s 262 lb-ft of torque to the rear wheels if required; alternatively, it can not only disconnect the rear axle but the whole driveshaft, allowing the front wheels to hog all 287 horsepower. 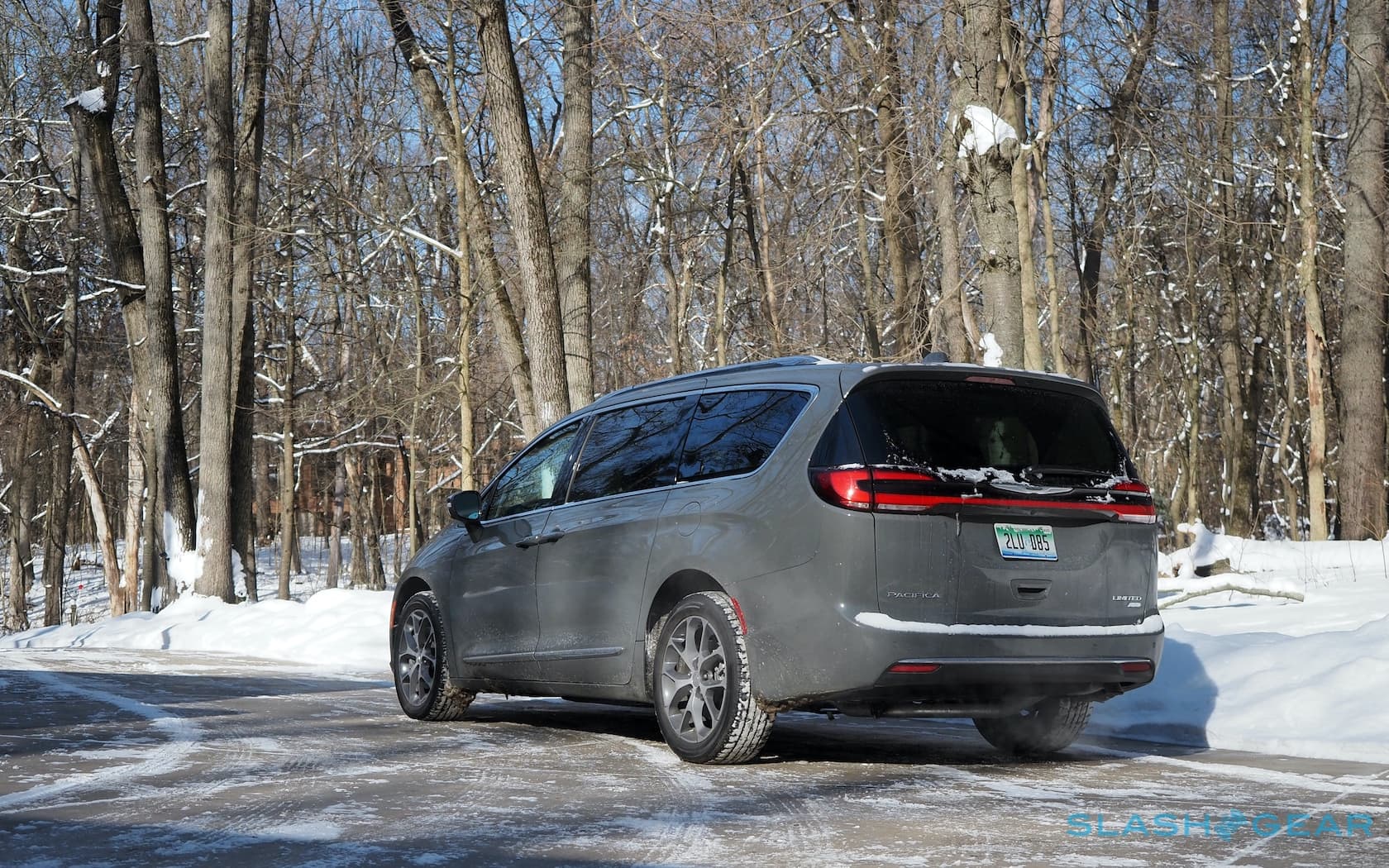 That happens automatically, the Pacifica responding to cues as blunt as slipping wheels or you hitting the gas to accelerate, or as subtle as flipping on the windshield wipers. It’s a little weird not having a screen full of drive modes to choose between, but all you’re left with is the knurled PRNDL knob to twiddle.

Out in the Midwest we’re in the depths of snow season right now, and the Pacifica AWD proved nothing less than sure-footed. The same can’t necessarily be said for its electronics, though: the low-mounted parking and other sensors proved easily mired behind slush and ice. At least, in Limited trim, you get a 360-degree camera to make looking out for curbs manually a little more straightforward. 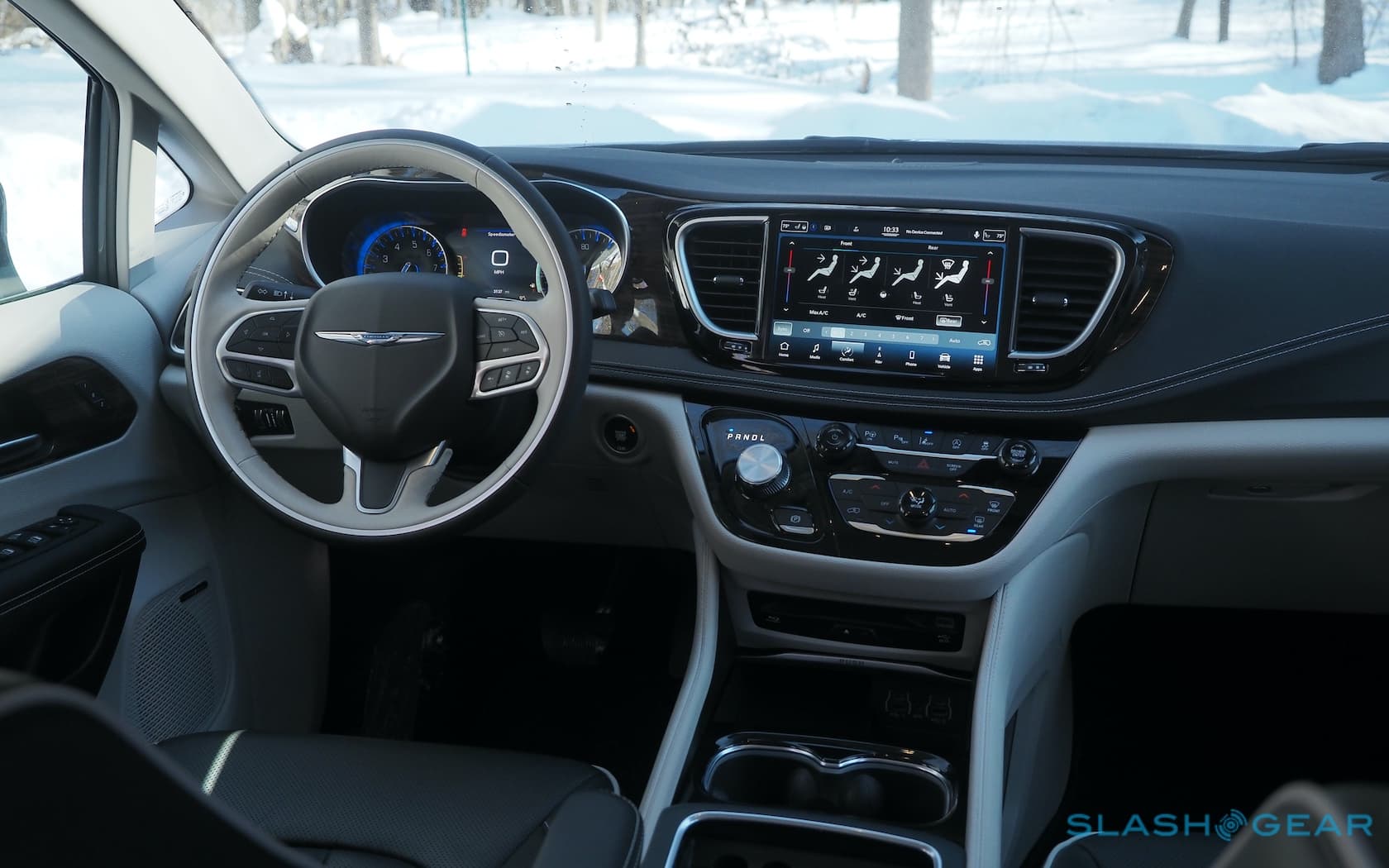 The Pacifica’s cabin generally is airy and practical. The Limited trim gets 8-way power adjustable seats up front, with heating and ventilation, plus a heated steering wheel. The second row captain’s chairs are heated too, though the third row must fend for itself and hope the tri-zone HVAC reaches them. The last row supports power-folding, while both the second and third have Chrysler’s excellent Stow ‘n Go system where they fold into bins in the floor. If there’s a downside it’s that it leaves the seats a little smaller than you might expect: these aren’t the bulky thrones you might be familiar with from oversized three-row SUVs. 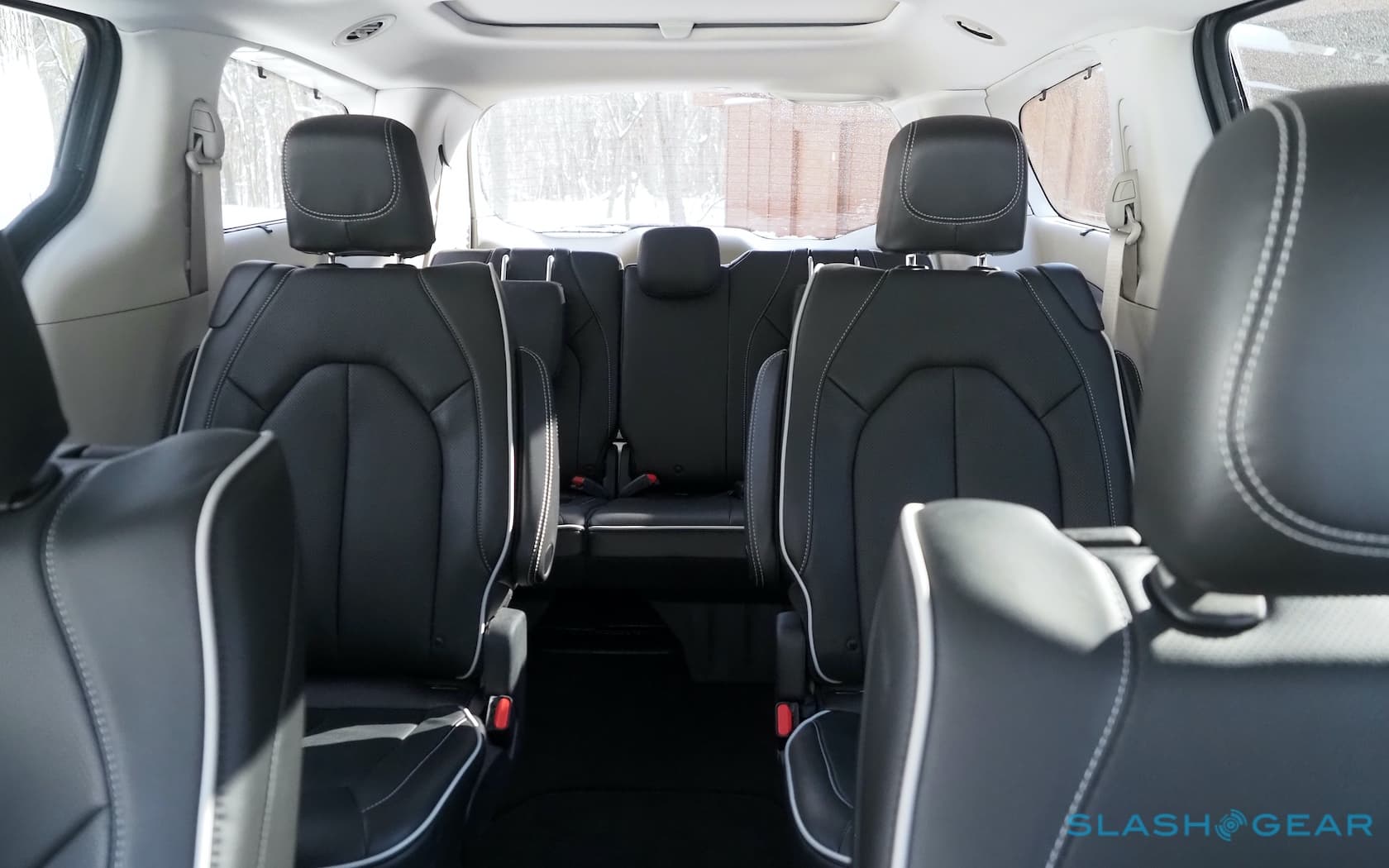 An integrated vacuum cleaner is one of those things you don’t realize you need until you live with it, and also comes standard on the Limited trim. There’s also cabin active noise cancelation, while if you add the Uconnect Theater Family Group option ($2,495) you get an interior “FamCam” to see just what mischief is occurring in the back rows. 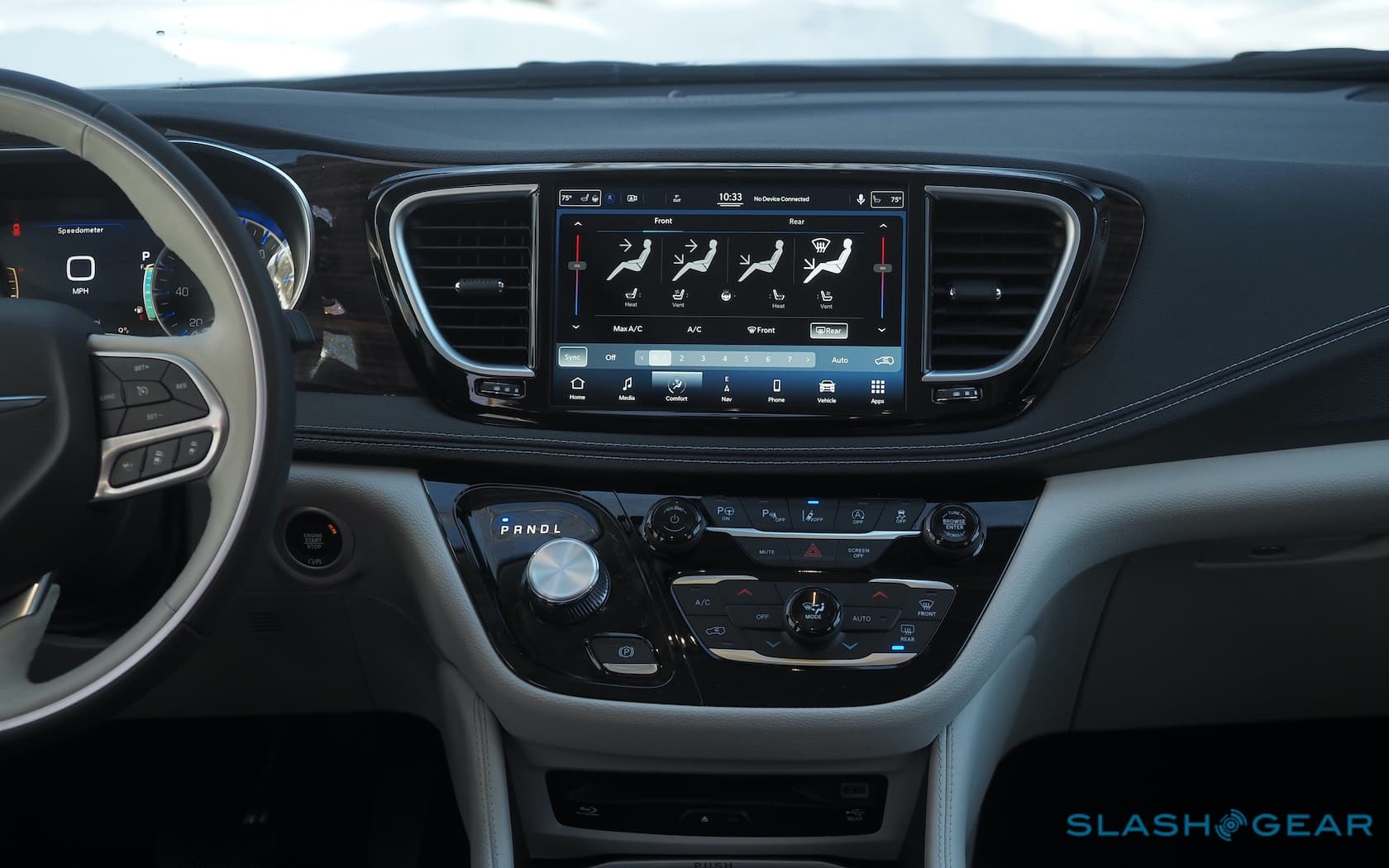 Uconnect 5 is comprehensive but can be a confusingly overwhelming with it; Chrysler tried to address that with a revamped homescreen, but it’s worth tapping some of the customization options to pull what you really need to the fore. At least it’s fairly fast in everyday use, though the same can’t be said for the smaller display sandwiched between the driver’s analog gauges. That’s oddly sluggish to respond, frustrating when you’re trying to flip through its pages while on the move.

That’s a shame, because otherwise driving the Pacifica can be fairly enjoyable. The AWD model adds almost an inch to the ride height, lending a slightly more SUV-feel, and as long as you don’t expect Hellcat speed (or, frankly, huge speed generally) it’s a comfortable place to be. The all-wheel drive system’s extra weight slows things down a little; figure on about 8+ seconds for the 0-60 mph run. 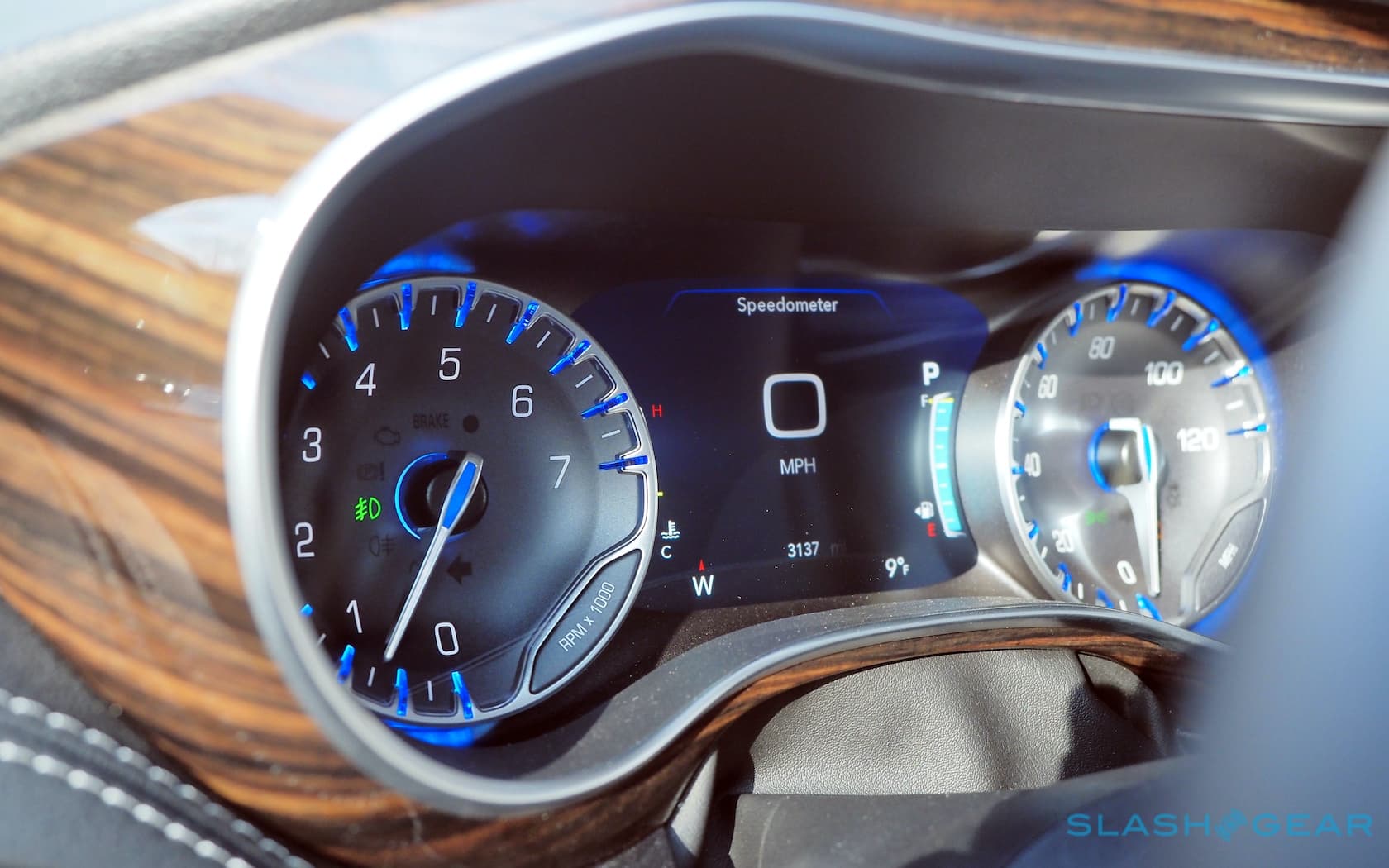 The standard 9-speed transmission isn’t designed with fun first, either, preferring to upshift and help keep noise levels low and economy at its best. Still, rated for 17 mpg in the city, 25 mpg on the highway, and 20 mpg combined, the Pacifica does pay a potential penalty for its more flexible traction. In my wintery testing I saw just over 19 mpg in mixed driving. Chrysler rates the minivan to tow up to 3,600 pounds.

Still, what the numbers don’t express is how pleasant things can be at the wheel. There’s a surprisingly small degree of body roll, though the suspension isn’t harsh or overly firm. Everything is very easy to modulate, as you glide serenely through traffic in what’s starting to feel like a mini-apartment on wheels. 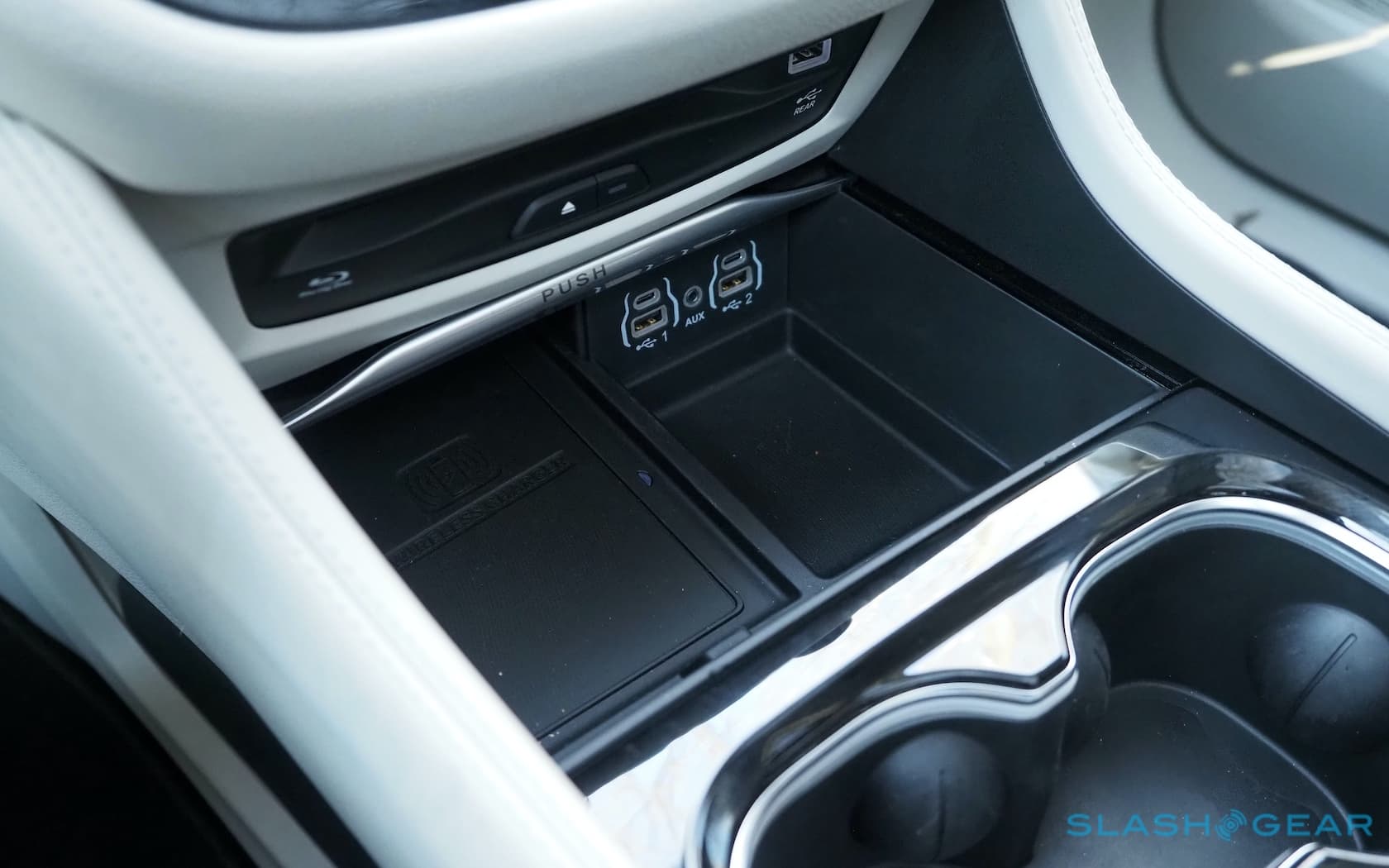 There’s room for improvement, mind. I’m a big fan of Chrysler’s Pacifica Hybrid, but right now you can’t have the PHEV drivetrain with all-wheel drive. That seems like a missed opportunity. I’d also not argue with plusher front seats, with the Pacifica Limited’s front row a little firm in the backrest. Chrysler does have a fancier Pinnacle trim, now, with more cosseting on offer. 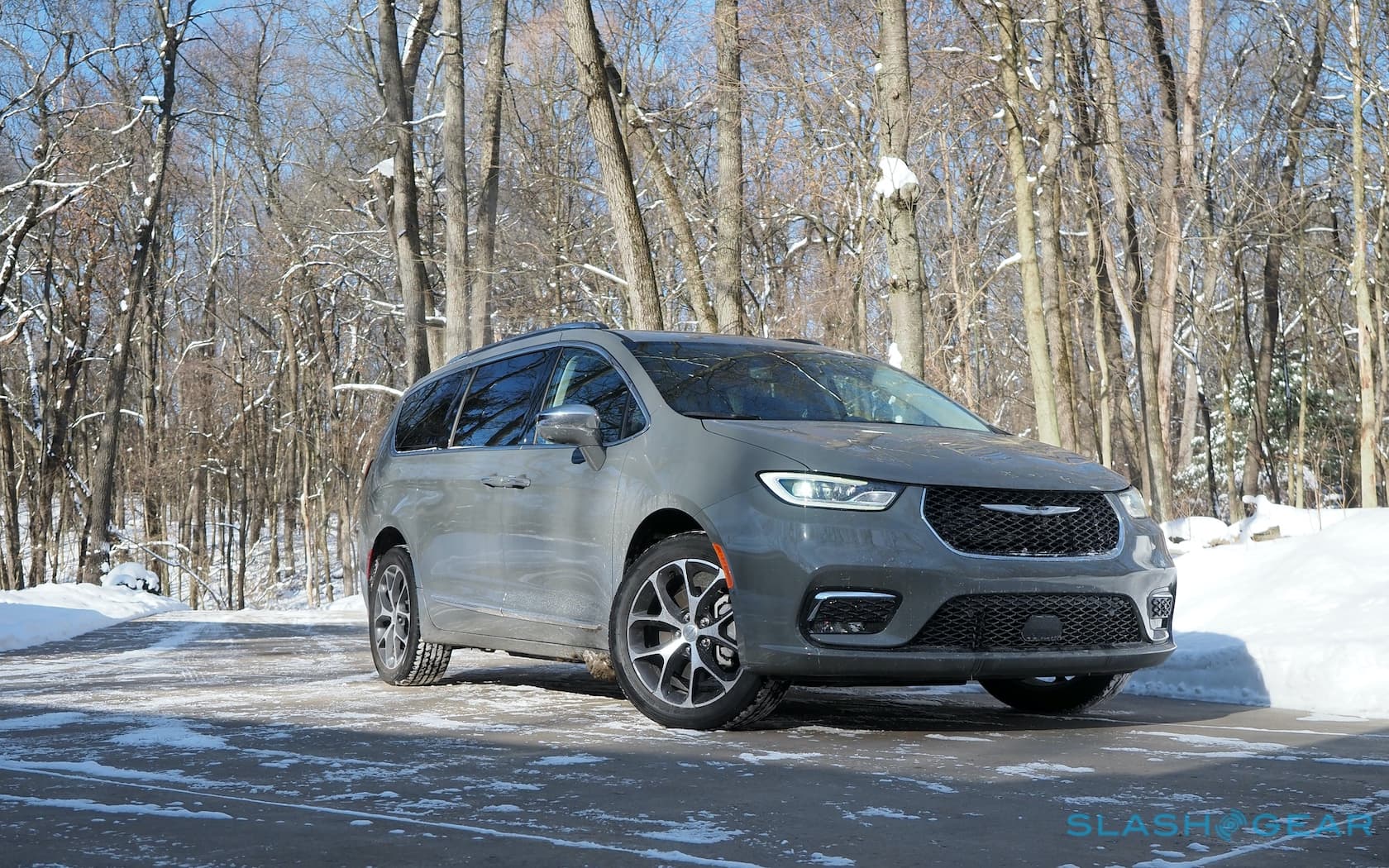 What I wouldn’t change are the looks. For a vehicle with practicality as its lodestar, the Pacifica still manages to look fairly stylish: I’m always reminded of one of those speedy European express trains. 2021 brought crisper detailing including a more imposing grille, and the Ceramic Gray paintwork paired with 20-inched machined alloy wheels with matching gray-painted pockets (a $995 upgrade over the standard polished 18-inchers) leave the Pacifica looking surprisingly intense for a minivan. 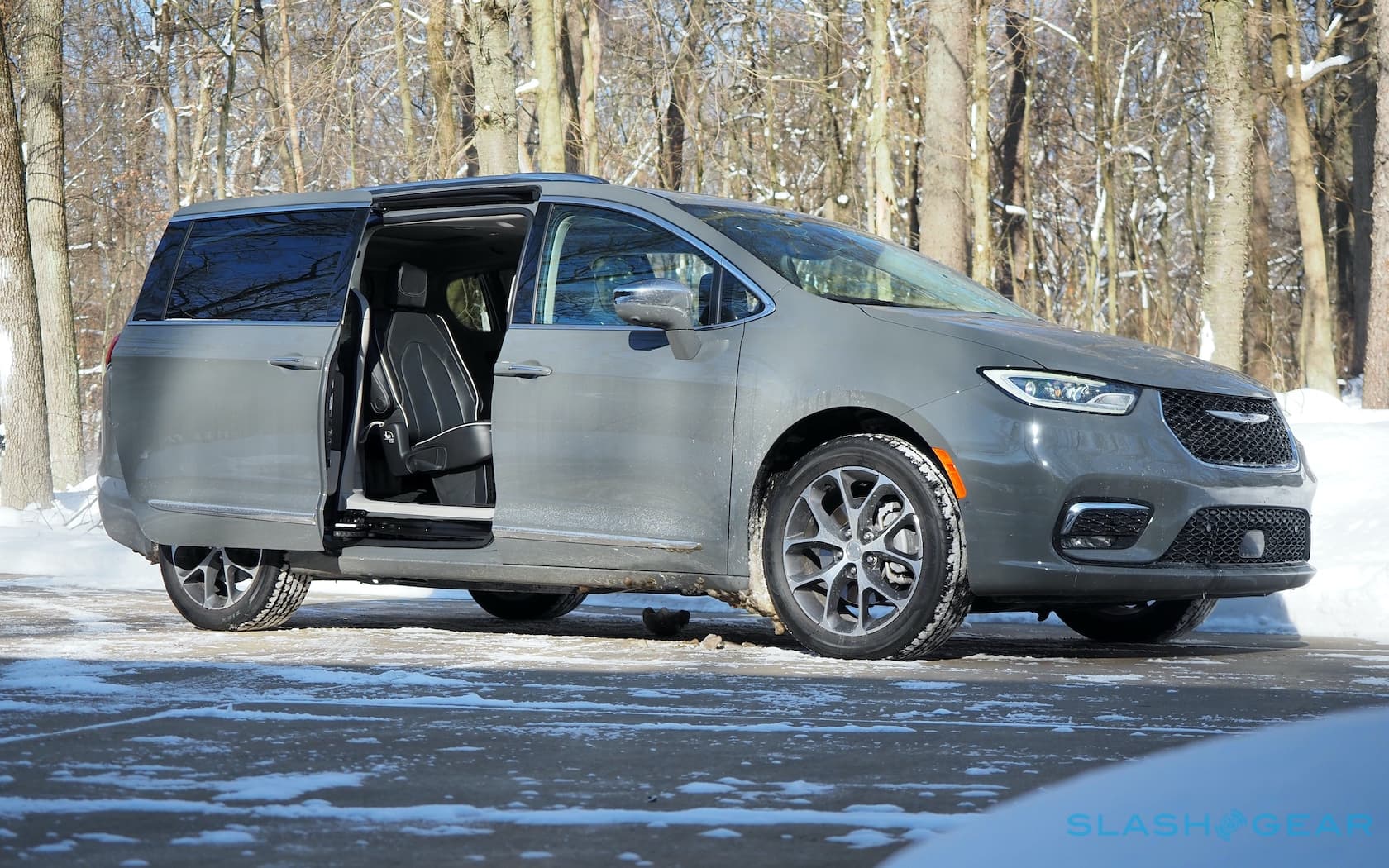 Chrysler offers all-wheel drive on all of its gas 2021 Pacifica models now, either a $2,995 option on the Touring and Touring L trims, or standard on the Limited and Pinnacle. In the process, it seriously expands the minivan’s practicality, and its appeal for those locations where tough winter weather demands extra traction. While I’d love to see a hybrid AWD version, it’s hard to recommend the PHEV Pacifica over this one when all-wheel drive can mean the difference between getting out of the garage or not.

As for the rest of the minivan experience, flexibility rules the roost. Plenty of room for people or cargo is great, but being able to quickly and easily adjust the cabin between the two – without having to drag out heavy chairs or pack around odd lumps and bumps – is what makes it work. Like with the Pacifica’s usability, AWD simply gets on with the job, leaving you to focus on how you’re going to make the most of all those seats, and all that space.