The Toyota Corolla has been around since 1966, earning a reputation for reliability and restraint for the price-savvy driver, but it’s never really been something you’d choose for a good time. Come the 2021 Corolla Hatchback, though, and the addition of a manual option and a whole new architecture aims to change that, though without straying too far from the hallmarks of Corollas-past.

You’d be forgiven for having to Google what the old Corolla looked like in order to compare it to this latest version. Design extravagance was never exactly the car’s strength, something Toyota at least attempted to rectify this time around. The tapering headlamps with their hockey-stick DRLs, enlarged lower fascia, and bulging fenders help make a better first-impression, while at the rear the Corolla Hatchback is positively shapely. Black badging comes as part of the $293 blackout package and adds to the mood nicely, and Toyota has a selection of two-tone finishes with a contrast black roof. 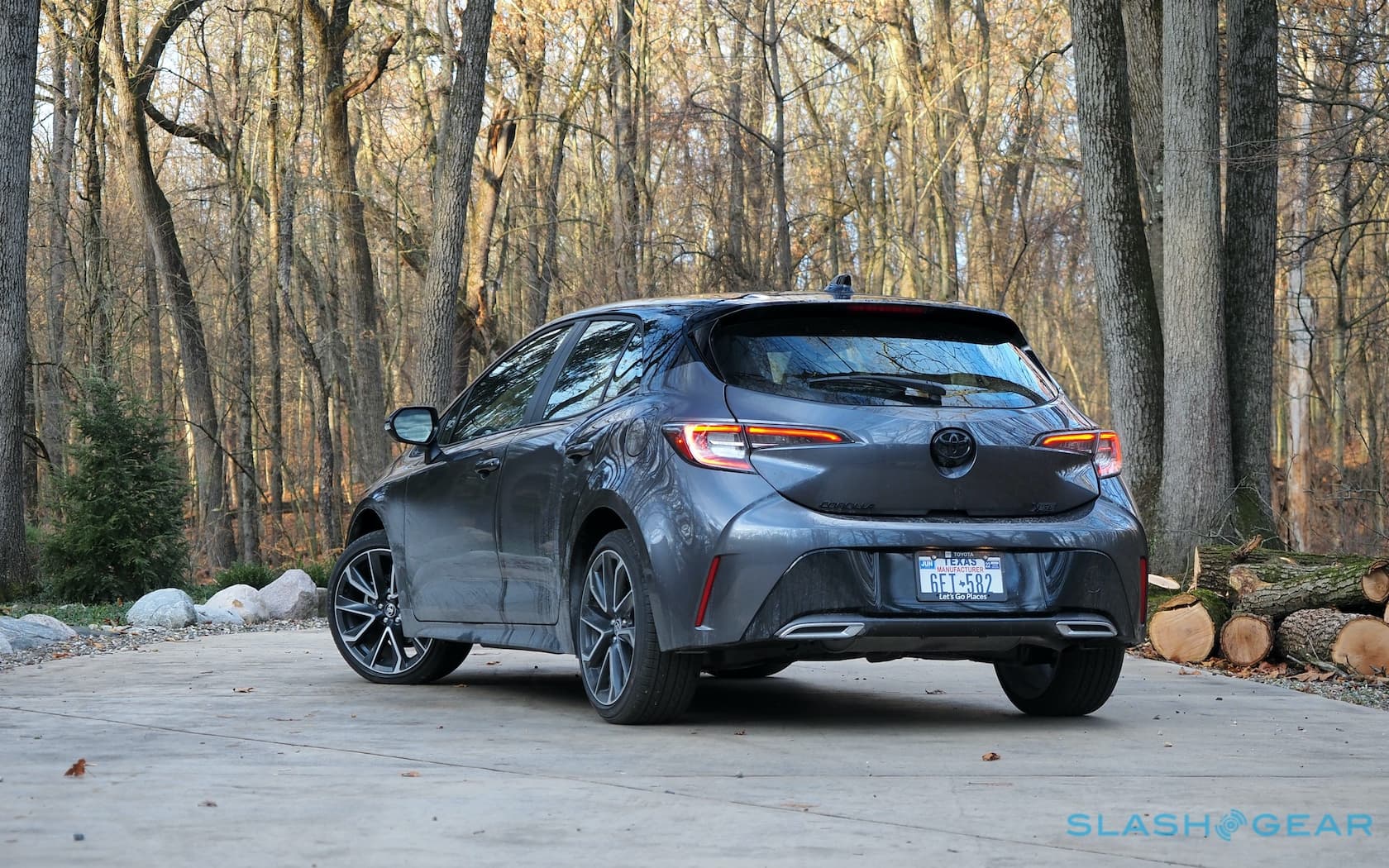 Pricing starts from an affordable $20,565 (plus $995 destination), though my XSE trim review car pushed that to a heady $23,515. For your money you get 18-inch machined-finish alloy wheels, fog lamps, leather-trimmed sport seats with heating up front, an infotainment system with an 8-inch touchscreen and both Android Auto and Apple CarPlay, and Toyota Safety Sense 2.0, the automaker’s suite of active assistance tech.

Perhaps most exciting, though, is the fact that you can have the Corolla Hatchback with a stick-shift. It’s fair to say that America’s generally waning interest in rowing its own gears means the writing is on the wall for the manual transmission, but for now the plucky little Toyota pairs its six-speed with front-wheel drive for some low-power fun. 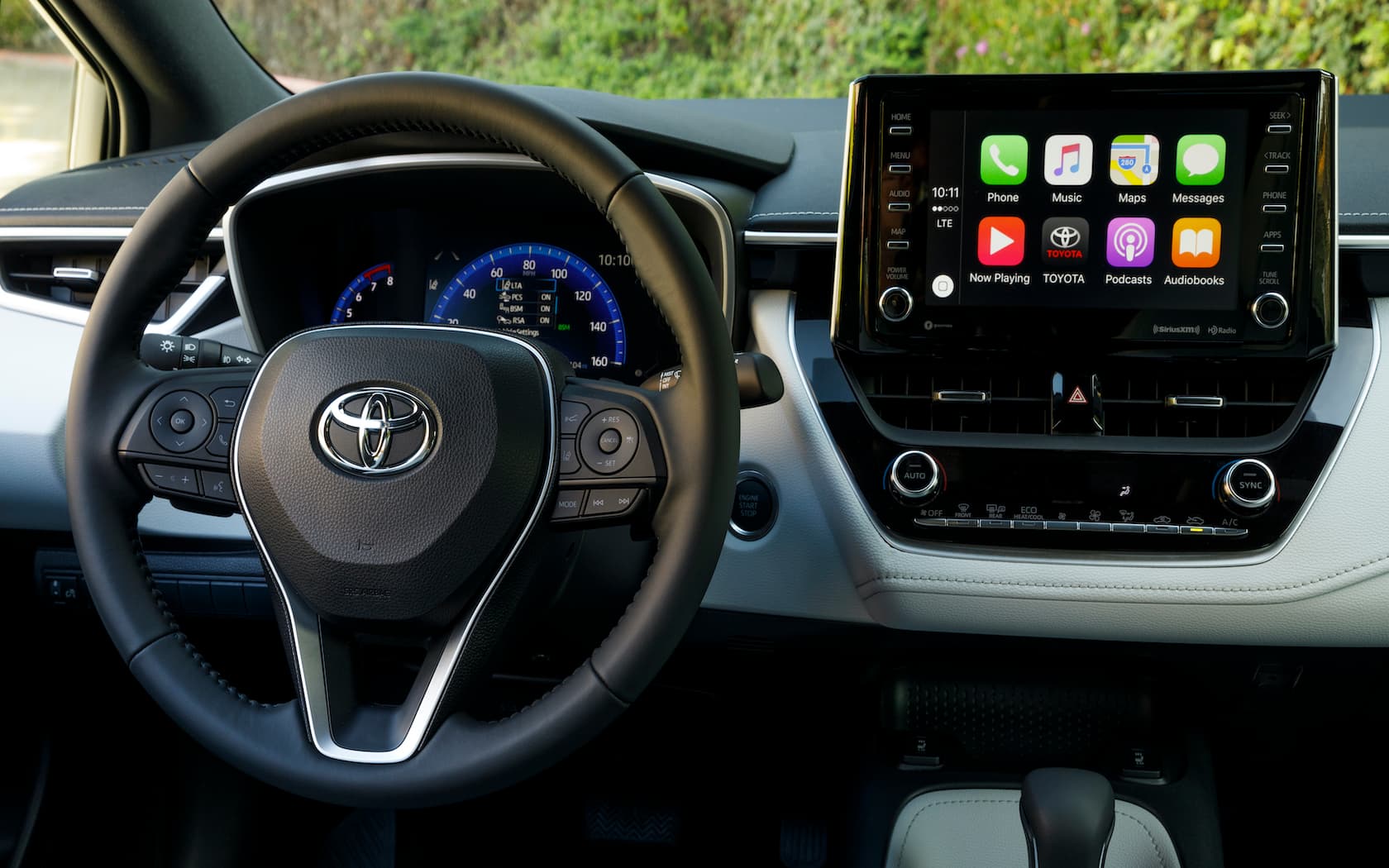 I don’t mean that in a sarcastic, “oh what a surprise the Corolla can’t compete with a supercar” way. Arguably the most fun you can have on public roads and for not-ridiculous-money is with a moderately powered, not overly complex compact car. Something you can wring out to the redline without worrying about your license instantly going up in flames, and which is just about constrained enough to keep you out of the very worst of trouble.

Toyota’s 2.0-liter inline-4 is a perfect example of that. 168 horsepower arrives at 6,600 rpm, encouraging you to keep it in lower gears and push the engine hard. 151 lb-ft of torque hits at 4,800 rpm. Acceleration isn’t slow but at around 8 seconds 0-60 it’s not exactly going to light up your hair, either. If you want a hybrid, meanwhile, you’ll need to go for the Corolla sedan instead.

The manual isn’t as good as what Mazda offers, let’s just get that out of the way first. That’s not to say it’s bad, however, it just lacks that perfect-snick that has you downshifting almost for the sheer pleasure of it. The Corolla’s stick, in contrast, doesn’t feel floppy or vague, but it’s a little on the light side. You’ll get familiar with that, too, since keeping the 2.0-liter in the right spot for overtaking or similar usually requires dropping down a ratio. 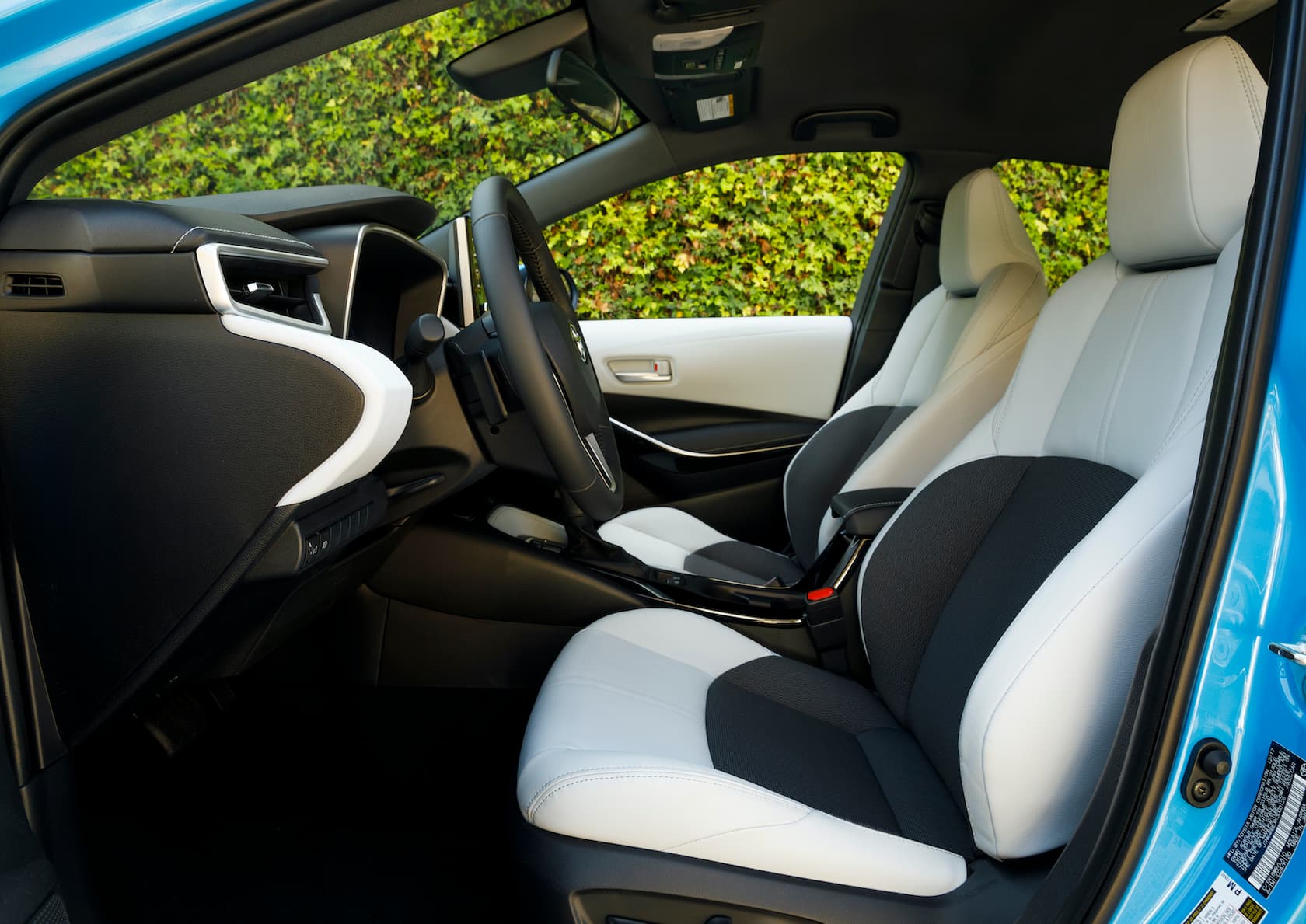 Toyota does offer an automatic, as an $1,100 option, and it’s an odd bird. It’s a CVT, though one that mimics ten regular gears, only the first gear is actually a real one. That way you don’t get that oddball rubbery feeling when you’re pulling away, while you also benefit from the economy advantages of the continuously variable transmission as things speed up. It sounds complex but it works pretty well, I found when I first drove the setup.

Underneath everything is Toyota’s TNGA platform, one of the primary goals of which was to drag the automaker’s cars out of the “worthy but dull” category. Certainly, the Corolla Hatchback is more entertaining in this generation than in any previous. Again, I’d rather have a Mazda3 if you’re judging solely on dynamics, but it’s poised in the corners and doesn’t leave you feeling isolated from the asphalt. Perhaps, when it comes to tire and wind noise, along with the not-entirely melodious engine drone when you’re keeping the engine spinning fast, there could be a little more isolation, for the ears at least.

Still there’s charm to be found on backroads. Rather than a nebulous Sport mode you get an iMT setting, which switches on rev-matching, and then the combination of the variable-rate steering, multi-link rear suspension, and some brake-based oversteer correction nudges the little hatchback further in the hot hatch direction. It’s a Corolla you’d actually want to drive, which is saying a lot considering this is the twelfth generation car. 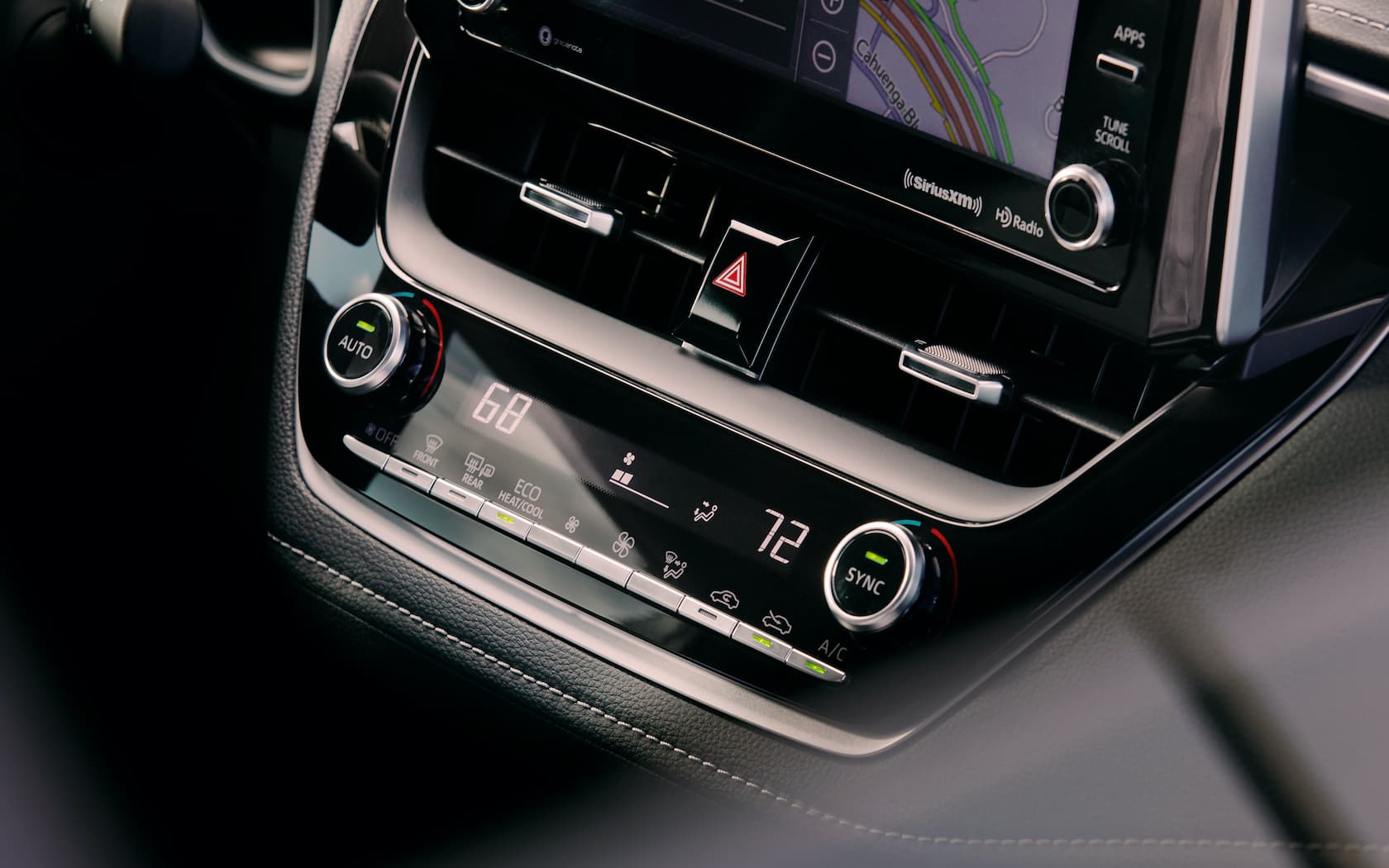 As for the cabin, the XSE’s fancier seats are comfortable and supportive, and there’s a surprising amount of soft-touch plastic and generally clean design. Toyota interiors have had a tendency to feel dark and a little too sober, but while the Corolla Hatchback isn’t exactly Jazz Hands it’s not Death March either. It feels solid and like it’ll last as long as Toyota fans expect their cars to.

The 8-inch touchscreen runs Entune 3.0, which is still not my favorite infotainment platform, and I’m not a fan of the twin columns of little buttons flanking the display. They’re meant to be easy shortcuts but I had to take my eyes off the road far too long each time to read the tiny labels. At least the screen itself is large, and you get SiriusXM on the XSE trim too.

Larger still is the 18 cu-ft trunk, with a 60/40 split rear bench. Sadly the rear seats lack in legroom, though headroom is fine. As for economy, the EPA says you should get 28 mpg in the city, 37 mpg on the highway, and 31 mpg combined; it didn’t prove too difficult to exceed those numbers. 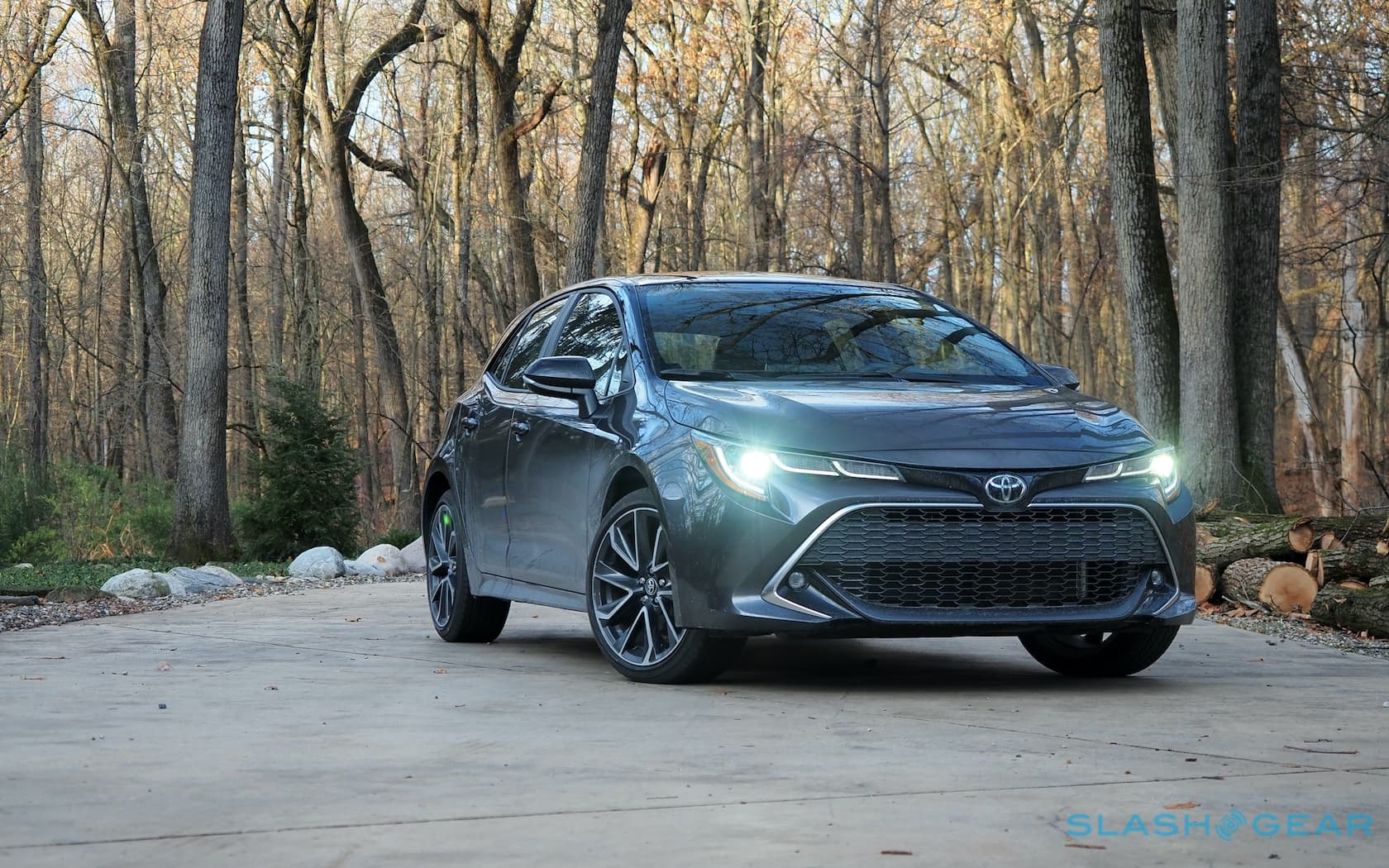 Perhaps the biggest argument in the Corolla Hatchback’s favor is comparing it to how well the last generation tried to take care of you. Toyota Safety Sense 2.0 – with adaptive cruise control, lane departure alerts with steering assistance, pre-collision auto-braking, cyclist detection, and low-light pedestrian detection – is standard in the 2021 car, as are blind-spot warnings and rear cross-traffic alerts. They’re features that not very long ago simply weren’t available on cars in this segment, and which in some cases you’ll pay extra for on vehicles two, even three times the price of the plucky Toyota.

That, combined with the fact that – unlike with the Mazda3 – you don’t have to dig deepest for the privilege of changing gears yourself, helps lend the 2021 Corolla Hatchback some spice. Equipment where it counts, a cabin that feels sturdy and long-lasting, and a design that’s finally memorable adds up to a car that’s finally elevated from “just another appliance” into something with more personality. Put in the effort to wind it up, and there’s even a little good, safe fun to be had.