Somewhere along the line, a manual transmission went from being the cheap option to something drivers get as a treat. How else to describe the 2020 Mazda3, where the six-speed stick is still available but only if you cough up for the most expensive Premium trim. When you’re paying at least $27,500 (plus $945 destination) for the privilege of rowing your own gears, I think it’s fair to expect a more rewarding experience as a result.

The Mazda3 Hatchback has long been the wildcard choice in its segment. Sure, it’s easy to go for a Corolla, or a Civic, or whatever Detroit is offering a juicy lease deal on at the time, but eager drivers – enthusiasts – look to Mazda for their practical thrills. 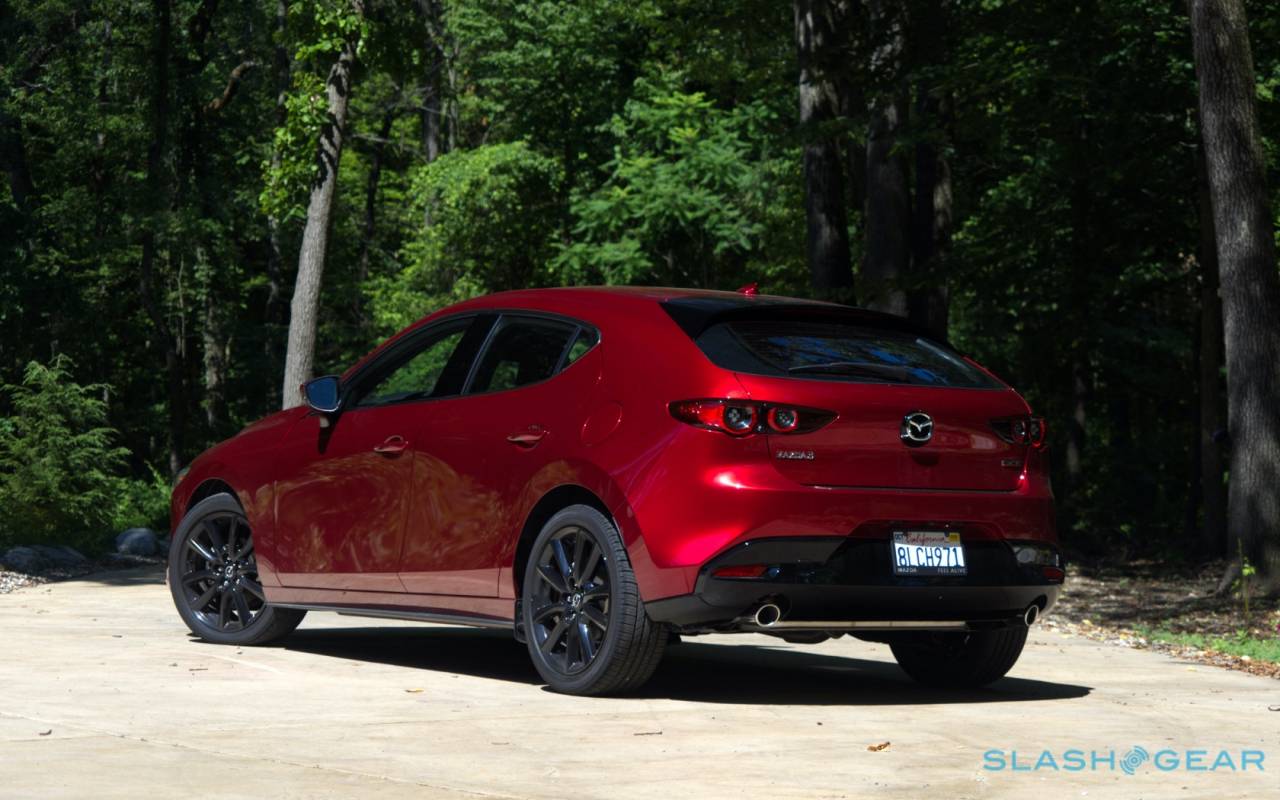 Maybe it’s the idea of shared DNA with that perennial backroad favorite, the Miata. Perhaps it’s just because, in a sea of earnest compacts still trying to make an argument in the face of rising crossover sales, the Mazda3 feels like it has some personality too. Maybe – and I’m not being flippant, no matter how it sounds – it’s the Soul Red paint, a $595 option and still one of the most beguiling hues you can buy on a car today.

The lure of the crossover hasn’t escaped Mazda. The automaker may have been slow to embrace electrification, but it’s not lacking compact SUVs, most recently adding the stylish and rewarding CX-30 to its line-up. Later in the year, the Mazda3 will make its counter-argument for fun, with the long-anticipated arrival of the 2021 Mazda3 2.5 Turbo. 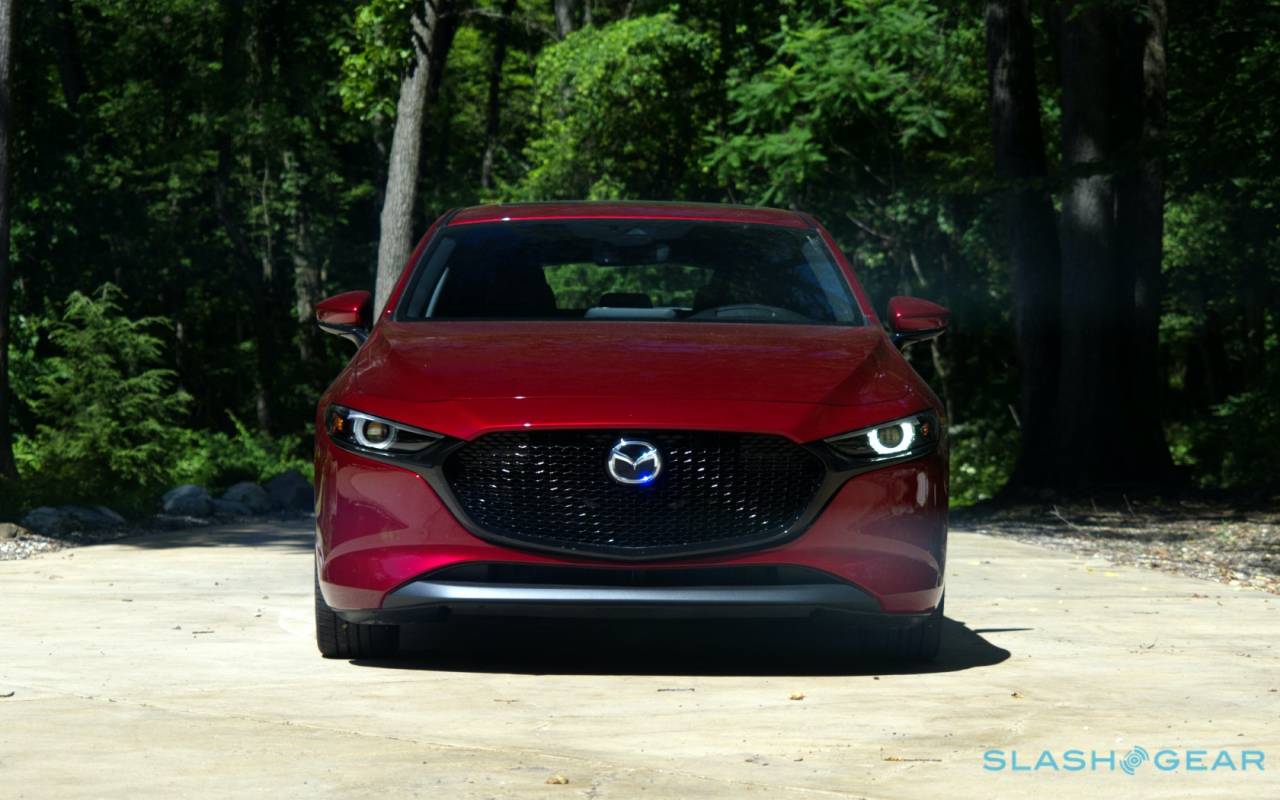 Until then, the 2.5-liter naturally-aspirated Skyactiv-G 4-cylinder is your one and only option. On most Madza3 you can have it with front-wheel drive or all-wheel drive, but opting for the manual not only forces you into the Premium Package but FWD too. Your three pedals arrive with 186 horsepower and 186 lb-ft of torque. 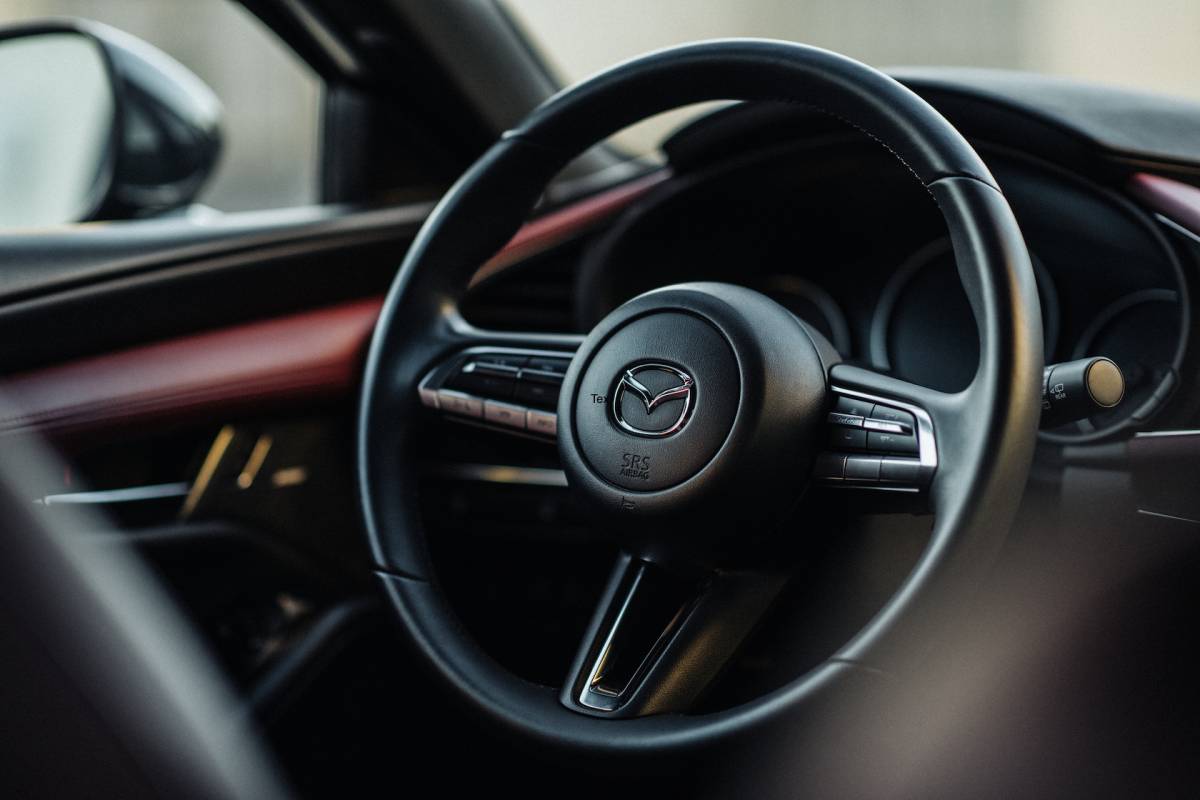 Everything feels solid and sleek, soft where your fingers will commonly fall, and generally easy to use. There’s a little too much piano black plastic in places – hungry for gathering fingerprints – and things can feel a tad dark with the black leather (go all-in and choose the red version, I say), but generally it’s a nice, and ergonomic, place to be. Things do get a little snug on the rear bench, mind.

There’ll be more power from the upcoming turbo, but the 2.5-liter inline-4 of the regular Mazda3 is no slouch. Mazda switched to a torsion-beam rear axle in its most recent update, ditching the independent rear suspension, a change that didn’t go down well with fans. All the same, there’s enough to please enthusiasts while still delivering a refined and comfortable ride the rest of the time. It’s firm, but not too firm; naturally-weighted, but not twitchy or unduly aggressive. 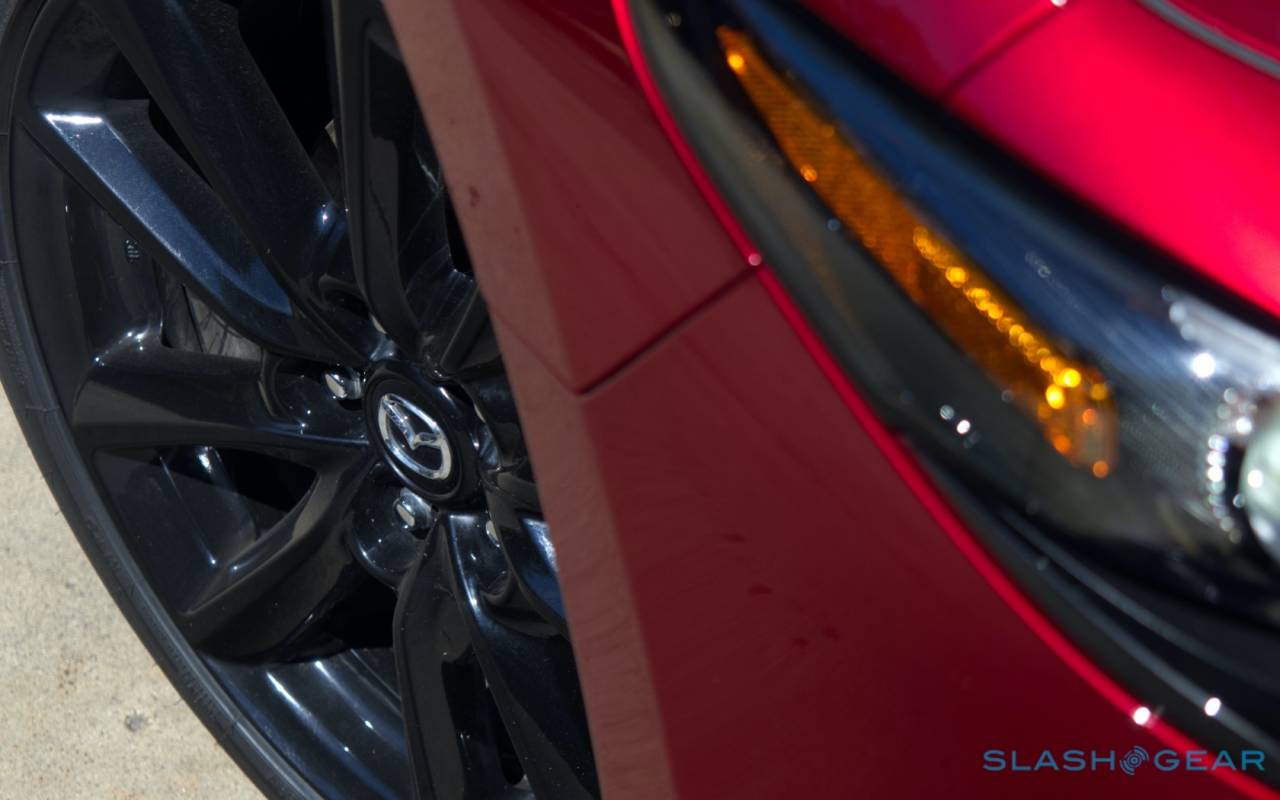 The stick shift is good, but not great. With memories of the Miata hot in my mind, and the Mazda3 loan bookended with a Honda Civic Type R, perhaps I was holding the Mazda3 to higher standards than were fair. All the same, a manual is now something you pay for, not pay to escape, and I don’t think it’s out of line to want as much bang for your buck as possible.

Mazda’s clutch is neither too firm nor too soft; the gearstick’s throw doesn’t leave you hunting around the gate. Nonetheless I found myself wishing it was a little shorter, a little more encouraging for snappy shifts on point-and-shoot back roads. Don’t get me wrong, as manuals go this is on the better side and it suits the Mazda3’s personality well. It’s just that, with a $2,300 premium over the Preferred trim, it’s not an inexpensive option. 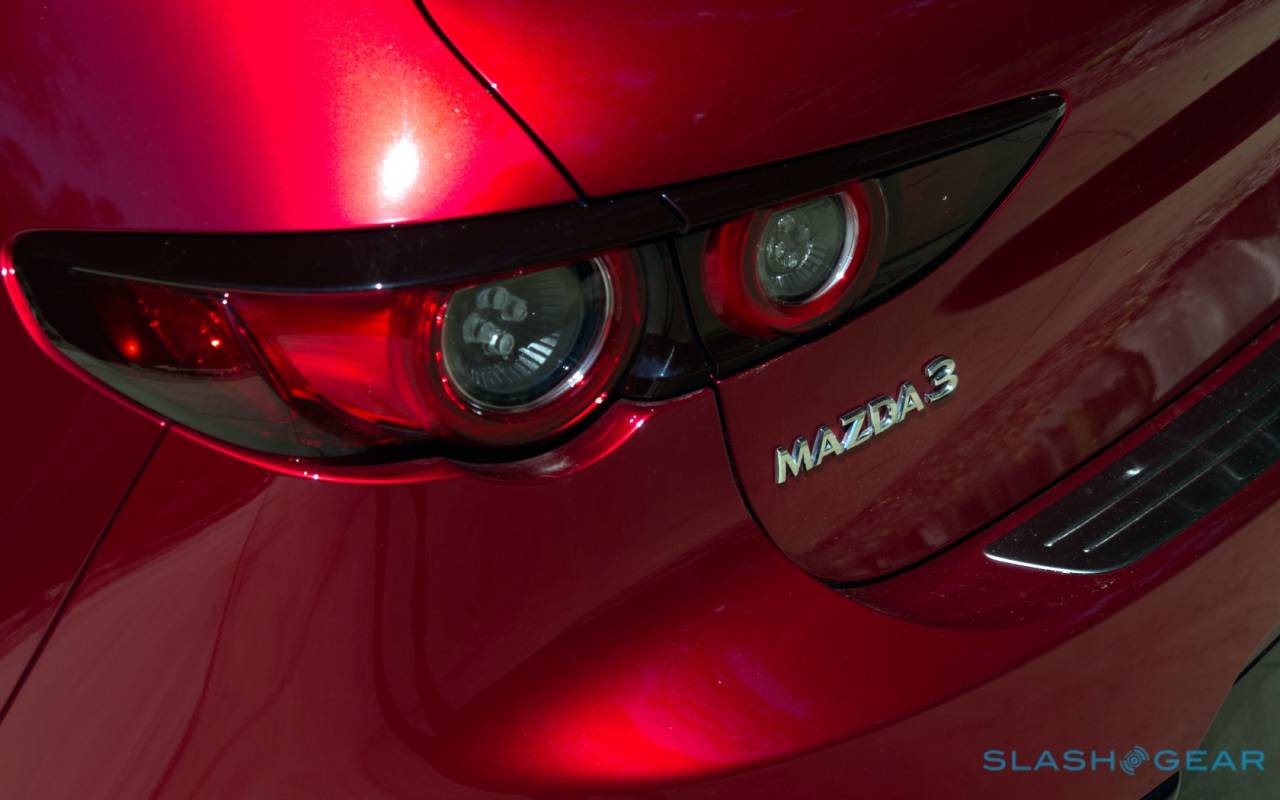 Neither, indeed, are the $450 for navigation, the $275 for the wireless phone charging pad, and $275 for the auto-dimming mirror. Mazda’s six-speed automatic gets slightly better fuel economy too, besting the manual’s city and combined scores by a point. The automaker says to expect 25 mpg in urban driving, 35 mpg on the highway, and 29 mpg combined. 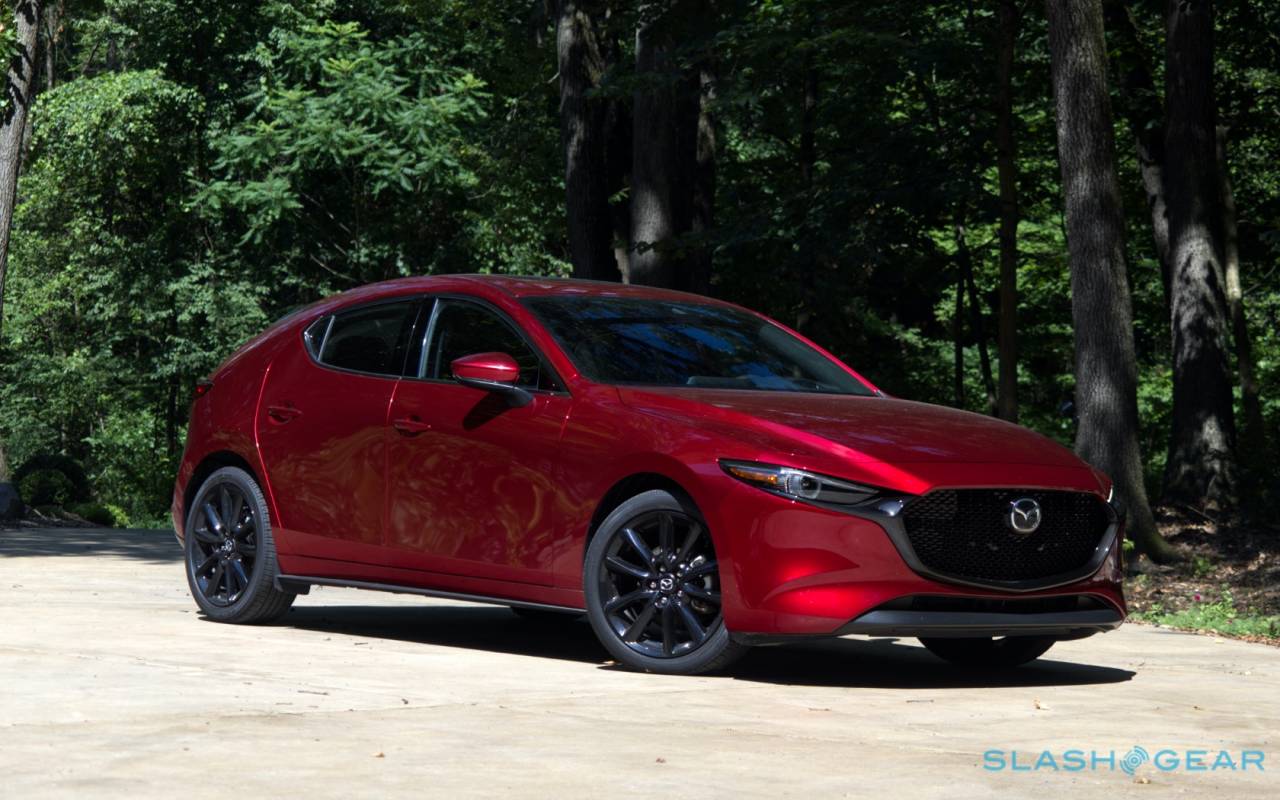 Expectations can be tricky things to deal with. Mazda has shifted the Mazda3 so that it feels more comfortable, more upmarket, and on that front there’s plenty to like about the car. At the same time, it has lost some of the direct urgency that used to be its hallmark.

Day to day, I suspect it’s a decision that makes sense. The 2020 Mazda3 looks the part inside and out; it’s compliant and pleasantly rewarding from behind the wheel; and it maintains that spark of personality that many of its rivals lack. If I’ve a gripe, it’s that when you’re paying top-dollar for the manual transmission you’ve every right to expect the best-in-breed, and it feels like Mazda saved that for the Miata.