Not all hybrids are created equal, something the 2021 Porsche Panamera 4S E-Hybrid makes abundantly clear. While this mid-cycle refresh of the second generation Panamera adds electric range and makes it easier to whir along in zero-emission harmony, the lure of 552 horsepower suggests Porsche isn’t exactly expecting hypermiling to be high on the agenda for owners. Think of this as electrification by way of speed-obsessed Stuttgart.

Only the observant will spot the subtle differences in styling between the old Panamera and this new, 2021 version. The SportDesign fascia which used to be optional is now standard; the trunk-spanning LED light strip now runs uninterrupted between the sculpted clusters. E-Hybrid cars still get Acid Green brake calipers and color-matching badging. 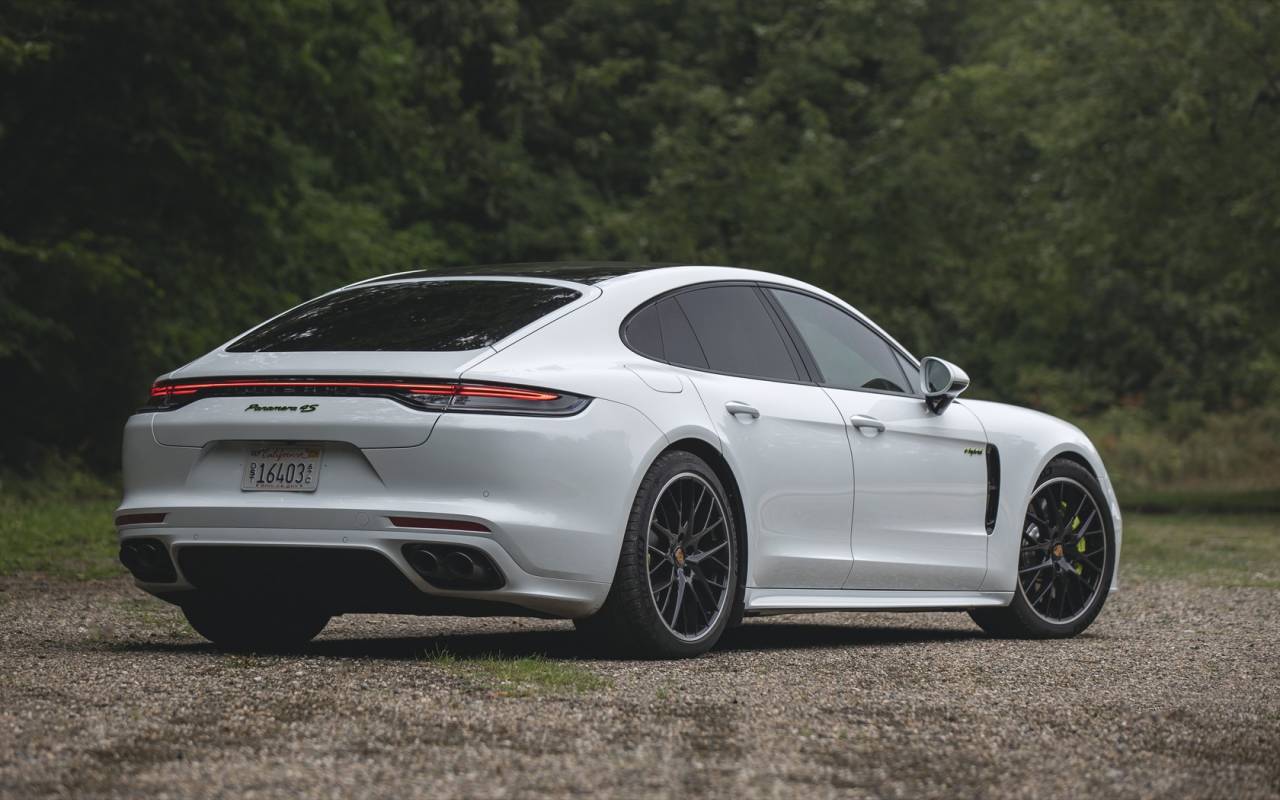 Under the hood there’s a 2.9-liter twin-turbo V6 engine, which Porsche combines with an electric motor. Total power is 552 hp and 553 lb-ft of torque, which actually puts the Panamera 4S E-Hybrid right in the performance ballpark of the old Panamera Turbo. 0-60 mph arrives in 3.5 seconds, and the top speed is 185 mph.

In short it’s definitely not a slow car in a straight line, despite a curb weight just north of 5,000 pounds. More important to the whole equation, however, is a larger battery. 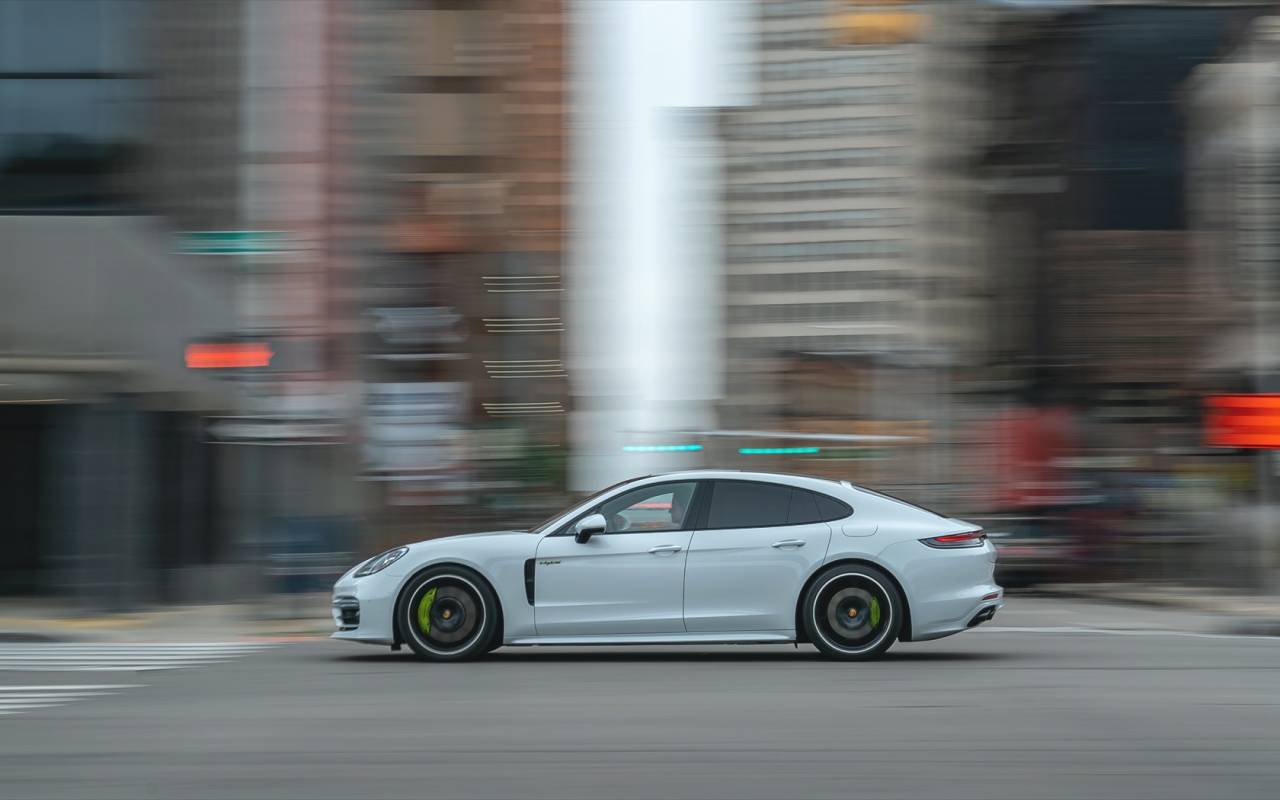 The old Panamera hybrid models had a 14.1 kWh battery; the 2021 versions get a 17.9 kWh upgrade. It’s the same physical size – trunk space remains at 14.2 cu-ft with the rear seats up, or 43.8 cu-ft with them down – but almost 30-percent more power-dense. As you’d expect, it means you can drive further in pure-electric mode: Porsche isn’t expecting official US EPA numbers until late Q1 2021, closer to the car’s arrival on American shores, but based on my time with it and the Panamera 4S E-Hybrid’s own dashboard estimates, 34 miles seems a reasonable expectation.

However it also means you can keep playing with that maximum power for longer. The electric motor contributes 134 of the horses and a full 295 lb-ft of the torque, so making sure you have some electrons on hand for the fastest maneuvers is key. In Sport and Sport Plus modes, the Panamera is aggressive in recharging so that you’ll stay in that max-power bracket: around 9 kW in Sport, rising to 12 kW in Sport Plus. 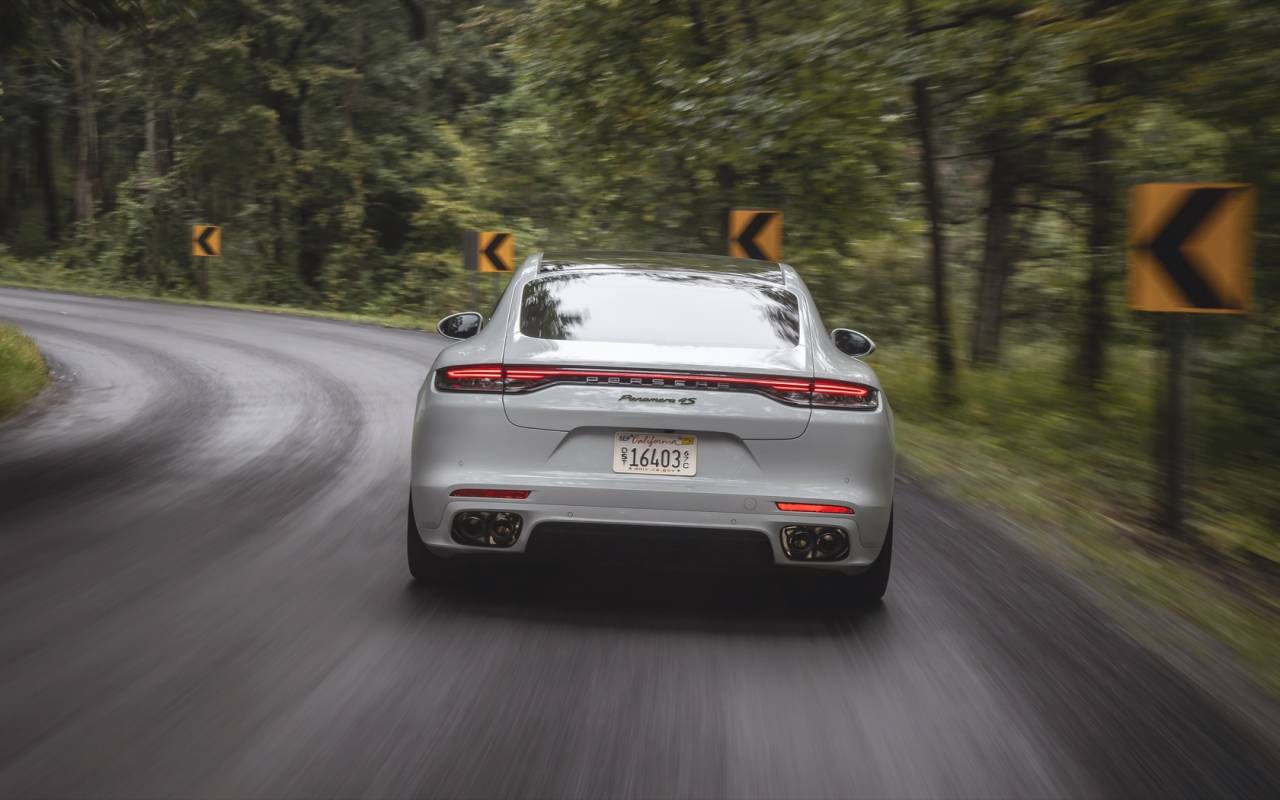 The larger battery also allowed Porsche to make some sensible changes around charging on the move. As before, the Panamera 4S E-Hybrid can top-up its lithium-ion pack while you’re driving, with a charging option in the drive mode settings using the V6 as a mobile generator. This time around, however, Porsche has capped that at a maximum 80-percent charge, since the fall-off in efficiency above that is significant.

Most of the time you’ll be charging by plugging in, of course. There’s a 3.6 kWh onboard charger – a 7.2 kWh version is optional – and a J-1772 connector. Don’t expect the sort of super-rapid rates as you’d get on a Taycan, however, with Porsche saying that the Panamera 4S E-Hybrid won’t have DC fast charging support. Luckily the comparatively small battery shouldn’t take forever to charge if you have a Level 2 connection to hand. 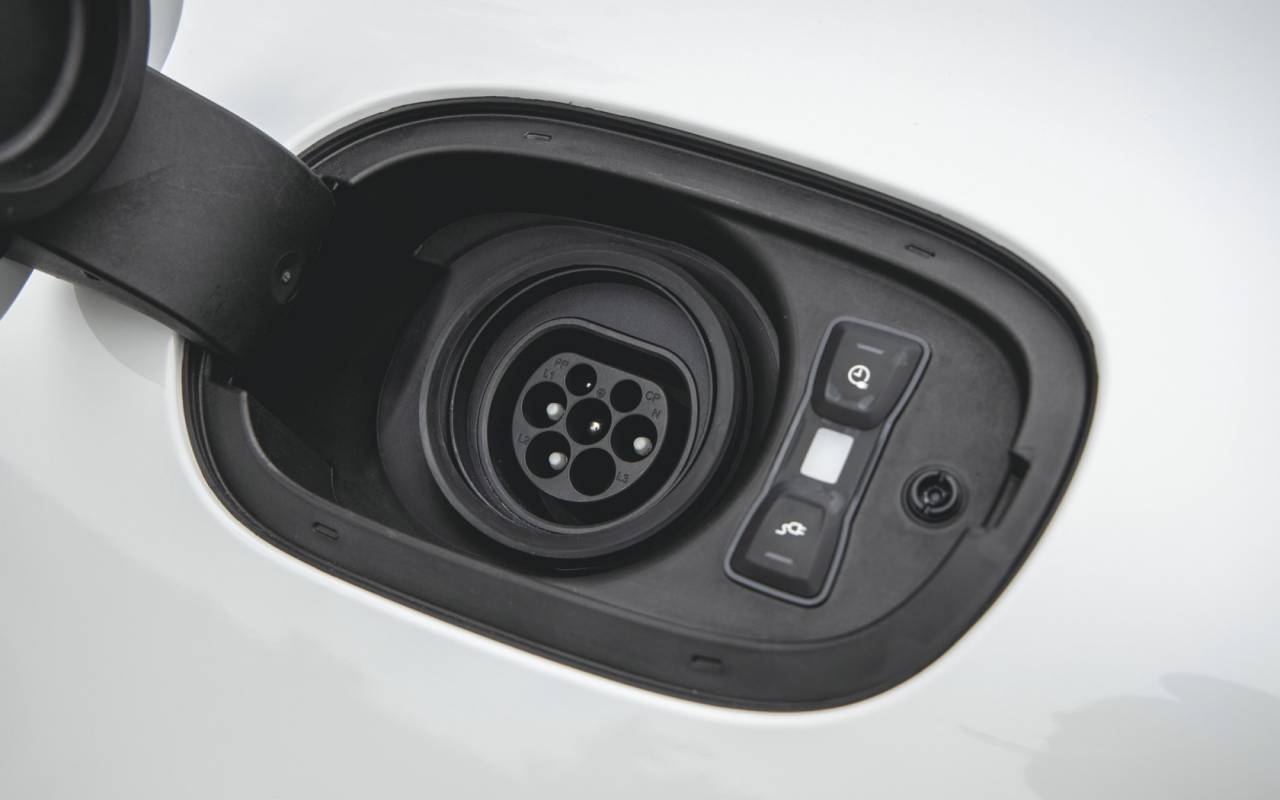 Start up, and you kick things off in E-Power mode. The Panamera prioritizes electric power, with peak torque arriving when you’re about halfway down the accelerator’s travel. The V6 kicks in shortly after, and Porsche says its systems learn from your driving habits, what route guidance is set, and the topography of the road to adjust how the car balances its power options. If the battery goes too low, it’ll switch to Hybrid Auto, topping up the charge when there’s juice to spare. 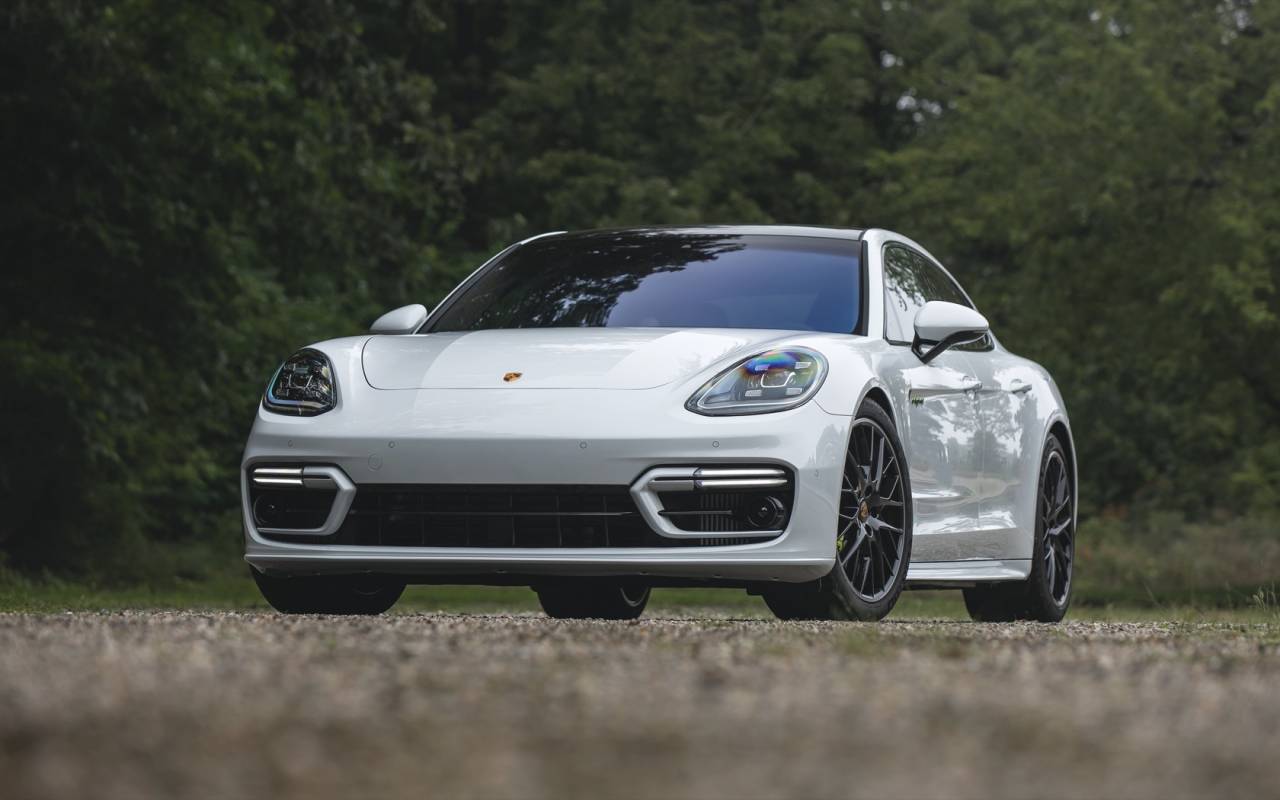 Among the changes this 2021 refresh brings are tweaks to the brake pedal feel, and how it blends regenerative and traditional slowing. For the most part you’ll be tapping the former – one of the display options shows just where the power is flowing from – though the transition between the two is effectively seamless.

Complete with adjustable dampers and a settled, cosseting ride, there’s no doubting that the Panamera 4S E-Hybrid can handle limo duty, and that’s without spending more on the Executive trim. Where things get really interesting, of course, are when you switch to Sport or Sport Plus mode, with the dial on the steering wheel. 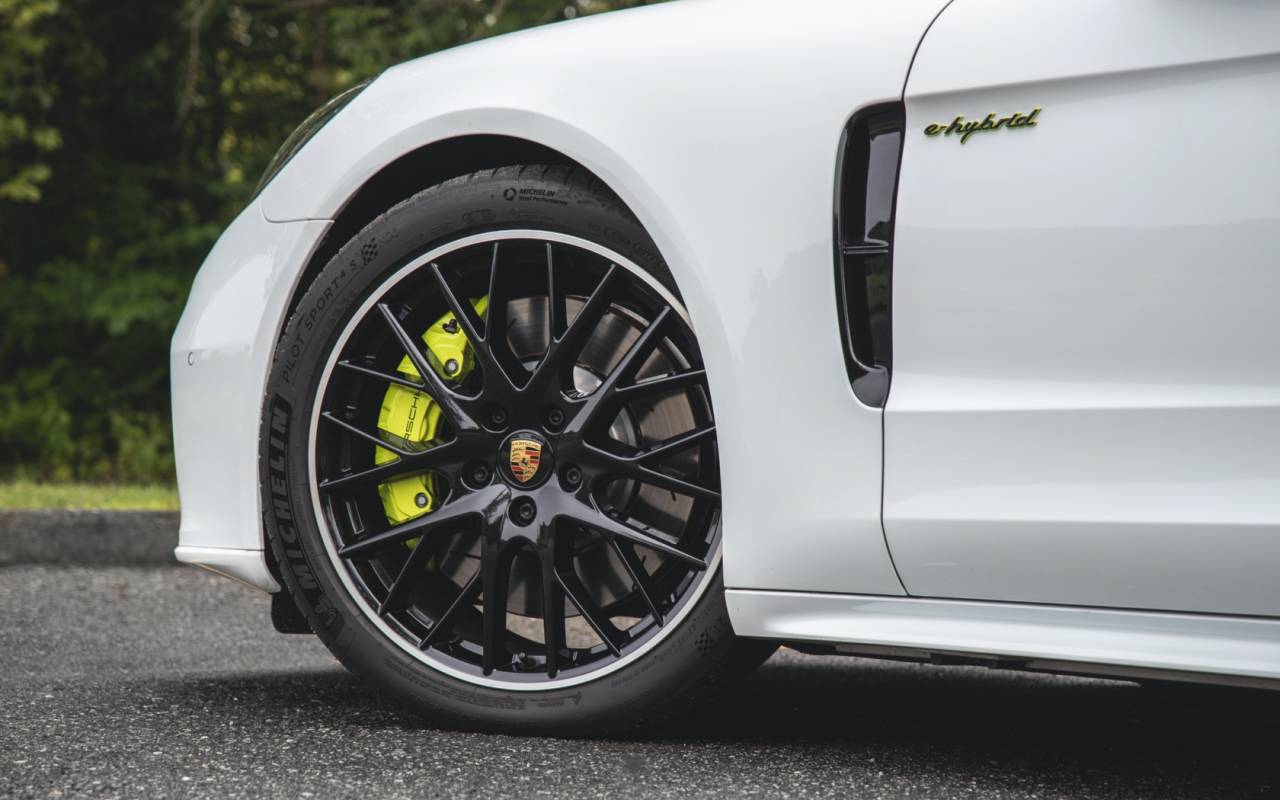 Porsche’s Sport Chrono package is standard, and the change in personality clear. Going fast is no problem at all, the E-Hybrid’s electric motor launching you from a standstill with a surge of power, and then the V6 contributing its maximum torque from just 1,900 rpm. It’s delivery that belies both the curb weight and the Panamera’s general size, the gas engine’s gurgle harmonizing nicely with the electric whine. Quite honestly, I’m not sure why you’d opt for a gas-only Panamera when the E-Hybrid’s electrics fill in any semblance of turbo lag that might still linger. 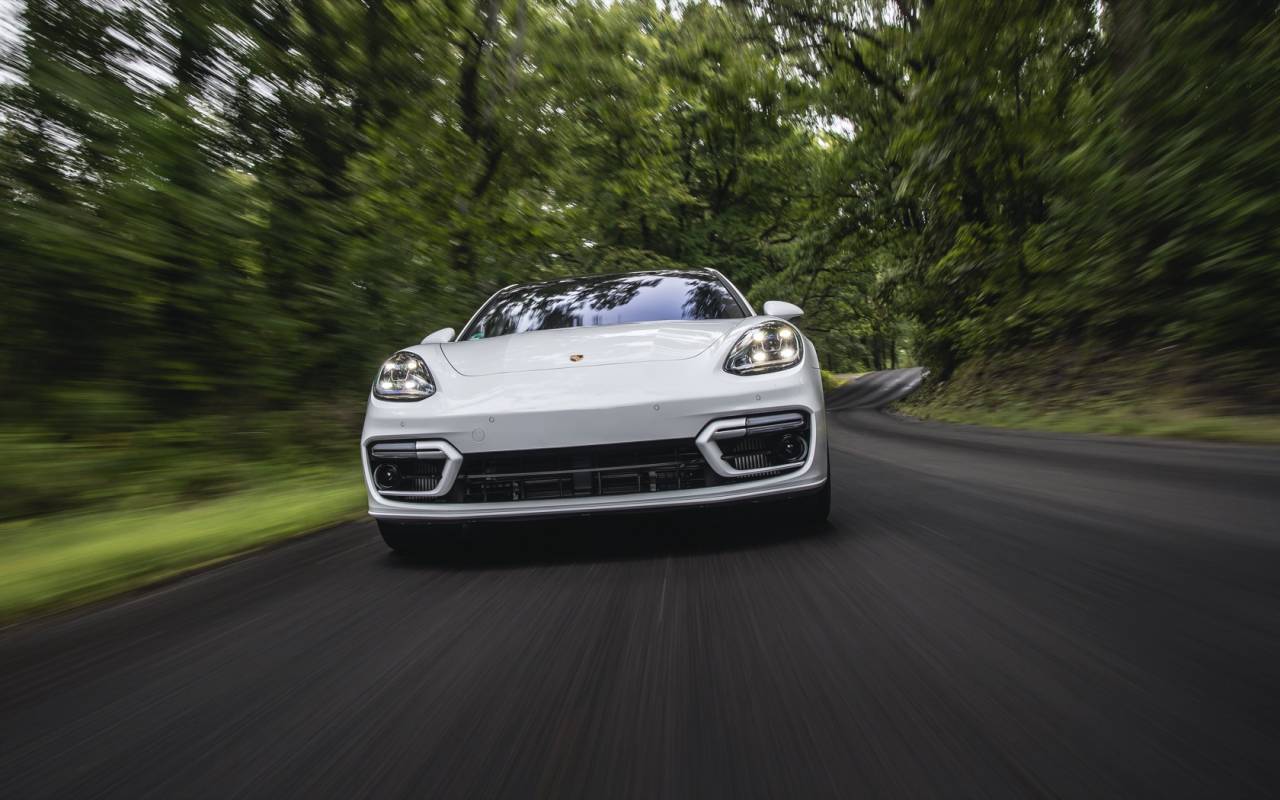 Come the corners, and things are unexpectedly nimble. Porsche says that it pushes even more torque to the rear wheels in Sport and Sport Plus mode, though the car will shuffle power front and back depending on traction and other requirements. Indeed any mode could have 100-percent of the power going to the rear axle, it’s just that the sportier settings see that more often.

Grip in the turns is a combination of Porsche’s excellent chassis setup and some very sticky rubber. My test car’s 21-inch SportDesign wheels were larger than the standard 20-inchers, and I probably compromised on ride quality as a result, but even so I wouldn’t describe the Panamera as anything approaching harsh. For the first time Porsche is offering a Michelin Pilot Sport Cup 2 UHP tire as well. 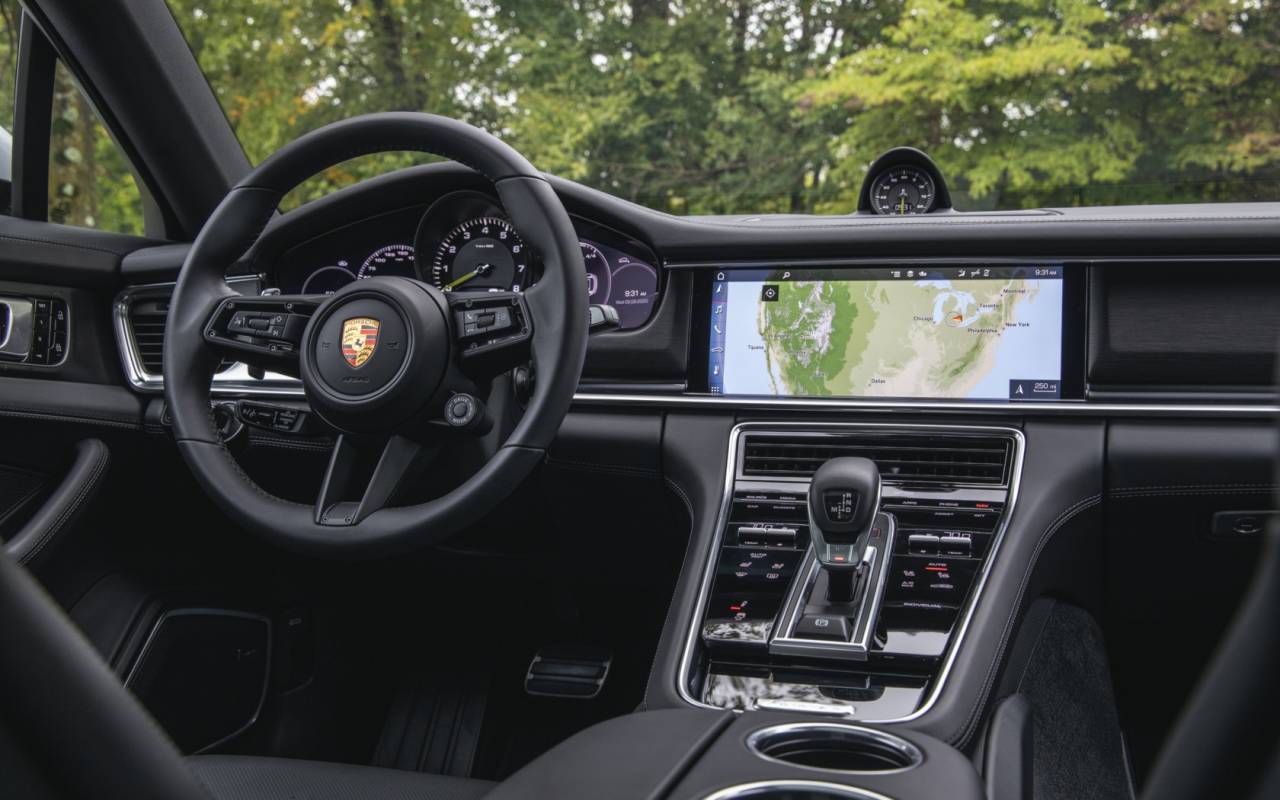 Inside, the Panamera’s cabin is a familiar place, though that’s no hardship. In keeping with the E-Hybrid’s theme of tech upgrades, wireless Apple CarPlay is now standard, and you can optionally add a wireless Qi charging pad for your phone. The USB ports have upgraded to USB-C, and deliver 15W now.

Porsche’s excellent infotainment system is standard, on a 12.3-inch touchscreen that’s now higher-resolution. That involved a processor upgrade and a bump in SSD storage too, while the embedded data connection supports faster LTE speeds – though not 5G yet – and the WiFi hotspot now uses 802.11ac. For audio, I had the 710 watt Bose Surround Sound system, which sounds just dandy, but Porsche offers a 21-speaker Burmester 3D upgrade with 1,455 watts and an active 400 watt subwoofer, if you’re so inclined. 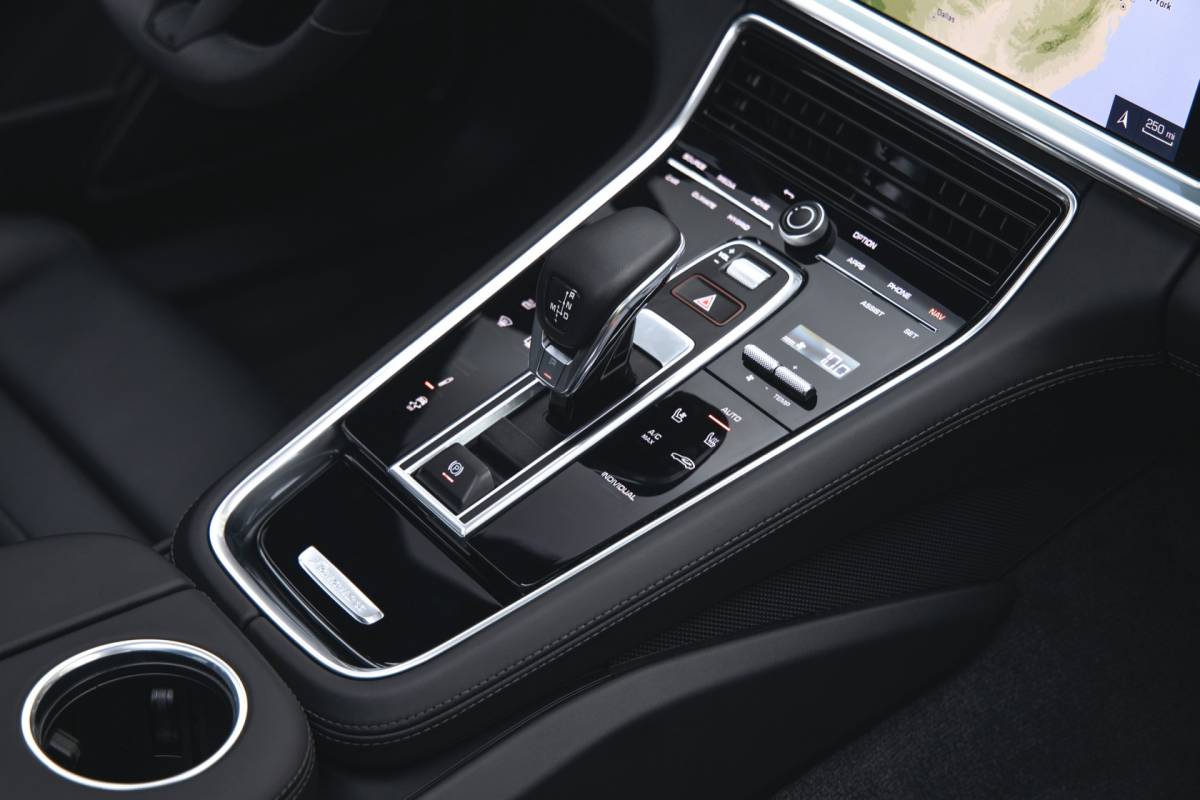 How much that will cost you – indeed, how much the 2021 Panamera 4S E-Hybrid will set you back itself – we won’t find out for a while yet. Porsche says it’ll confirm pricing closer to the Spring 2021 arrival in US dealerships. Figure on a starting point in excess of the $104k the old Panamera 4 E-Hybrid would demand, given the extra power and tech onboard.

Porsche’s take on electrification is a compelling one. Sure, this new Panamera hybrid can waft along in electric near-silence, not to mention filling you with the sort of green self-satisfaction once reserved for Prius and Leaf owners, but none of Porsche’s performance focus has been sacrificed in achieving that. Indeed there’s a solid argument that eager drivers should have the E-Hybrid top of their list, given the way its electric motor insinuates itself to support rather than supplant the V6. 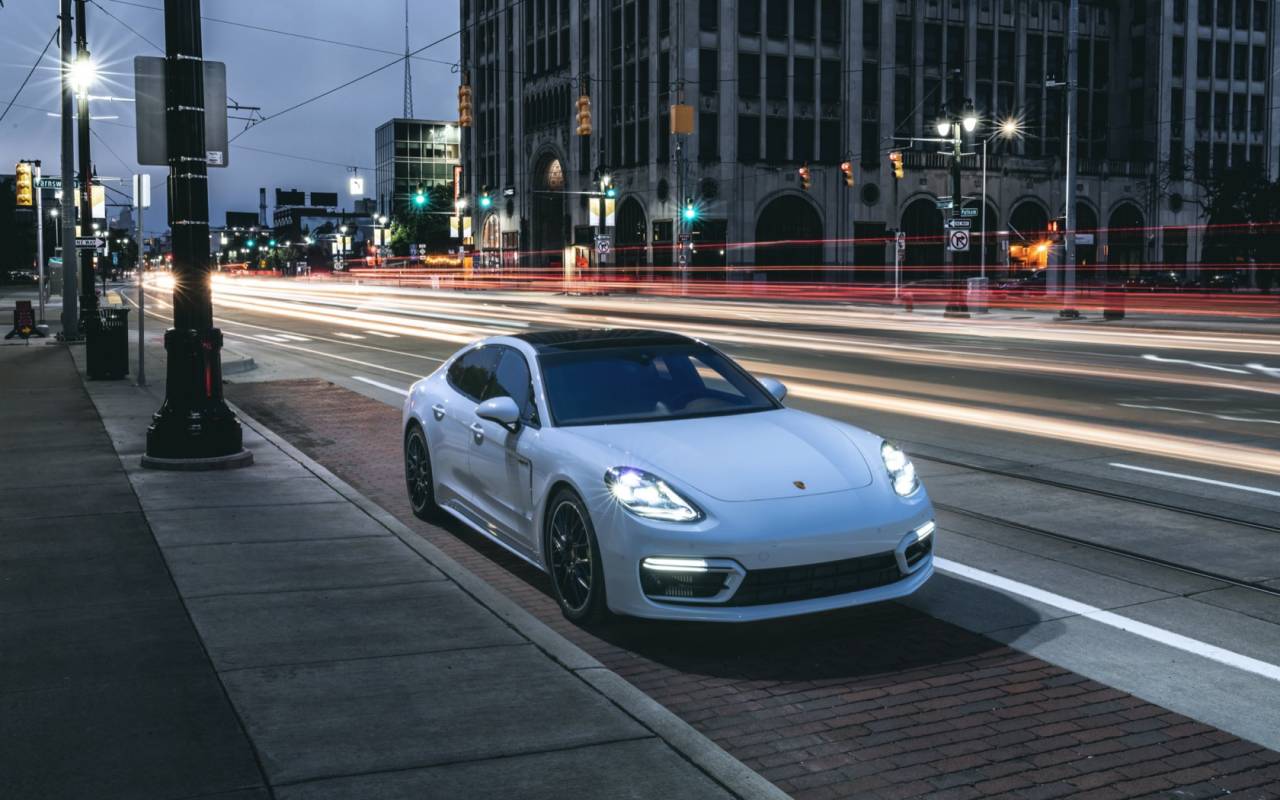 Then there’s the Taycan, Porsche’s all-electric sedan. Though you could question the place of a hybrid given its existence, the reality is that there’s room in the line-up for both. The Taycan is a stunning car, but it’s not for everyone: it demands you embrace EV ownership wholeheartedly, and it’s less practical than the larger Panamera. Faced with the sort of cross-state road trip many are now considering, given an understandable reluctance to risk a short-haul flight, the reassurance of that V6 and the easy availability of gas makes the Panamera 4S E-Hybrid difficult to resist.

Indeed the biggest danger is coming from inside the house. Porsche has confirmed that there’s a Panamera Turbo S E-Hybrid in the pipeline, and while we’ll have to wait for details it’s not hard to predict the “more power” recipe. In short, while the 2021 Panamera refresh may have improved Porsche’s four-door across the board, the most important takeaway might be just how much more compelling the E-Hybrid models have become.