Porsche’s 2021 Panamera has been unveiled, and the new model year brings with it not only revamped styling but a number of new powertrains including a new plug-in hybrid. Initially the German automaker’s take on the luxury sedan, the Panamera range subsequently expanded with the wagon-esque Sport Turismo.

The standard 2021 Panamera now uses Porsche’s 2.9-liter twin-turbo gas engine, slightly smaller in capacity but doubling up on turbochargers compared to the old 3.0-liter engine. It’ll make 325 horsepower, versus the 330 hp of the old car. 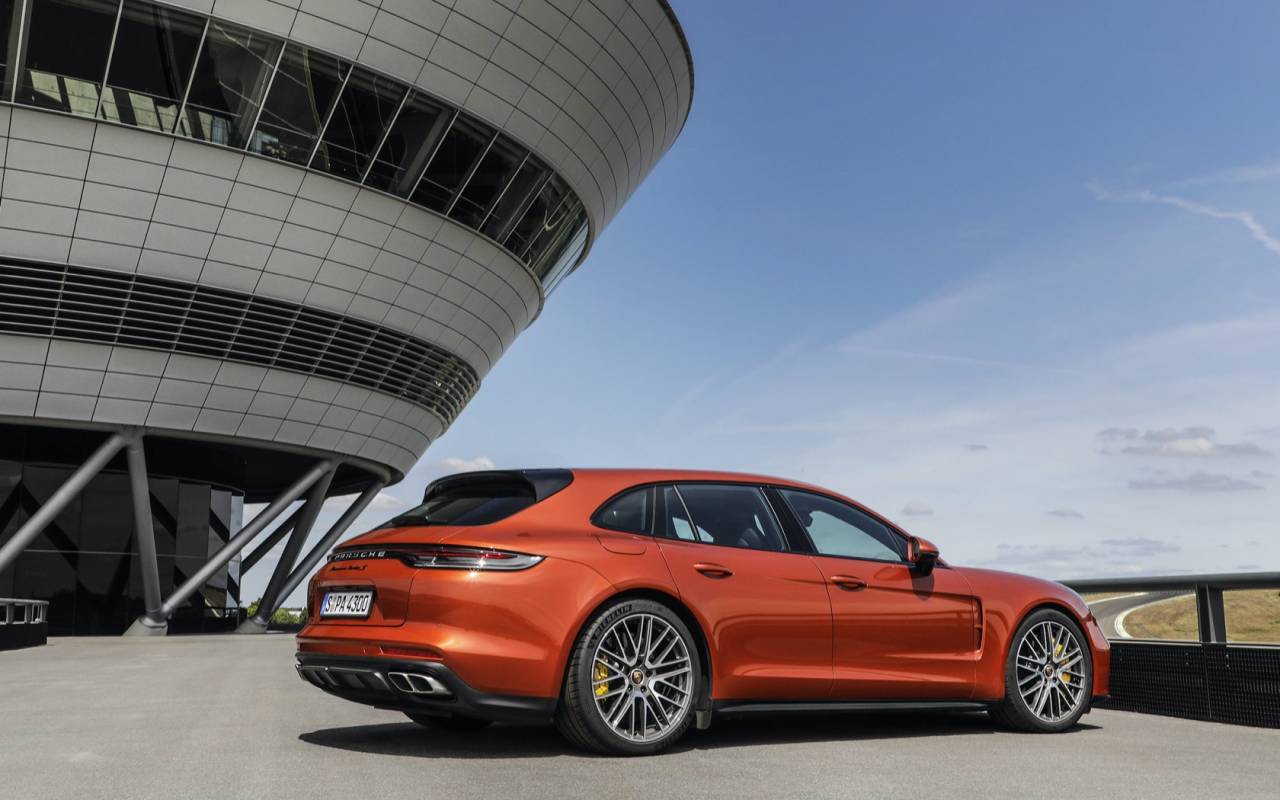 Everywhere else, though, power is up. The 2021 Panamera Turbo S, for example, replaces the old Panamera Turbo with a tweaked 4.0-liter twin-turbo V8. It’s good for 620 hp and 604 lb-ft of torque, a sizable increase from the 550 hp and 567 lb-ft of its predecessor.

0-60 mph now comes in 2.9 seconds for the Turbo S sedan and Sport Turismo, trimming a whole half-second from the old car. The Panamera Turbo S Executive does it in 3.0 seconds flat. Top speed is 196 mph. 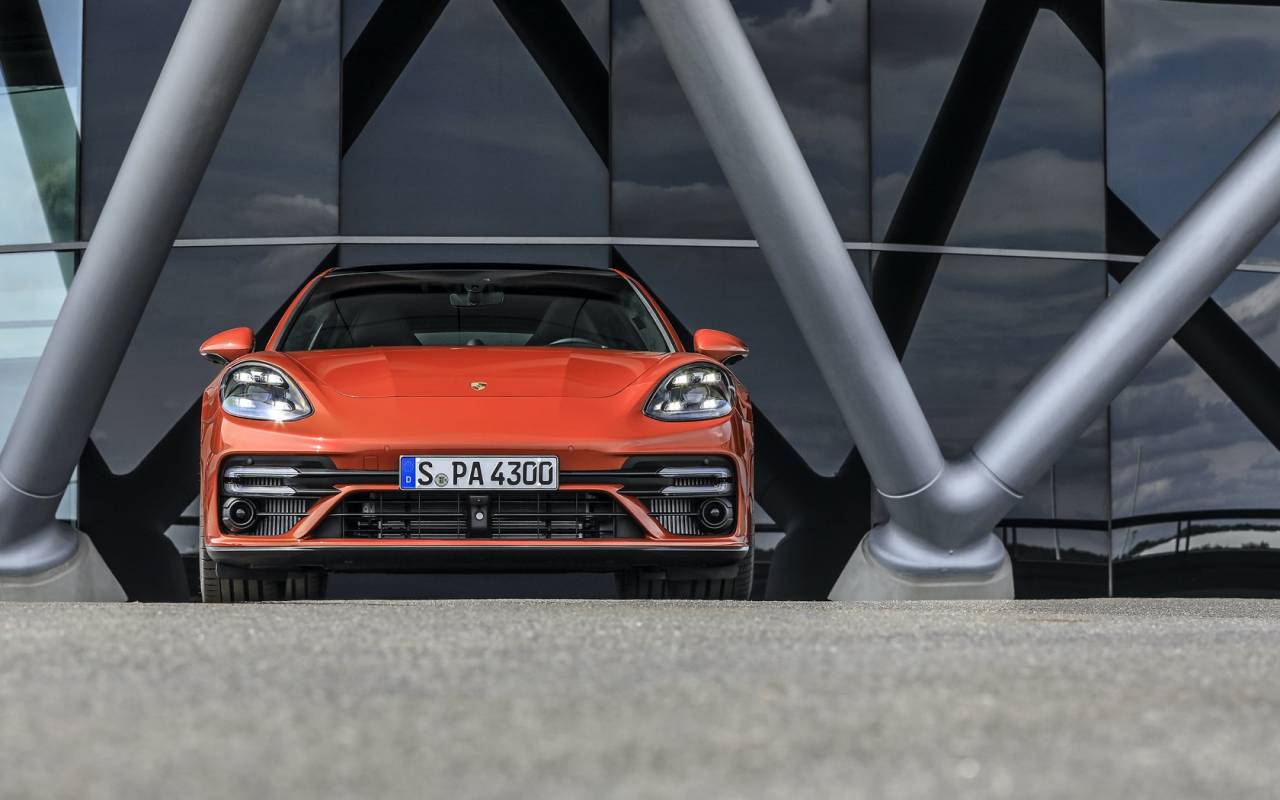 As for the 2021 Panamera GTS, that has a twin-turbo V8 and now squeezes out 20 hp more: power is up, at 473 horsepower, to go with 457 lb-ft of torque. Porsche says it has finagled the throttle calibration more, too, so as to better emulate the responsiveness of a naturally-aspirated engine. 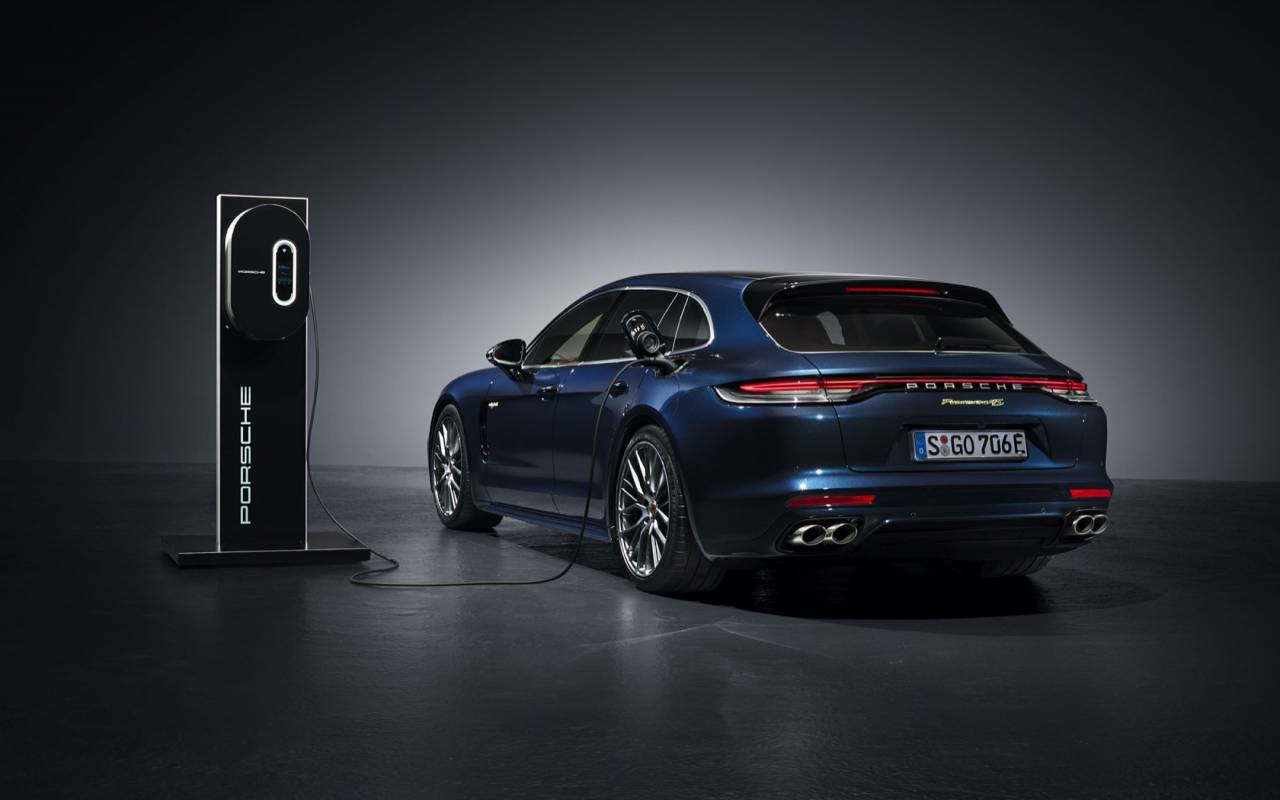 On the electrified side, meanwhile, there’s a new 2021 Panamera 4S E-Hybrid. It combines the 2.9-liter twin-turbo V6 gas engine with an electric motor, for a total of 552 hp and 553 lb-ft of torque. 0-60 mph arrives in 3.5 seconds, and the top speed is 185 mph: numbers, Porsche points out, that are very similar to the old Panamera Turbo.

All 2021 Panamera E-Hybrid models get a larger battery, with a 27-percent size increase taking them from 14.1 kWh to 17.9 kWh. There are new drive mode calibrations, too, for both better performance and improvements in efficiency, Porsche suggests. 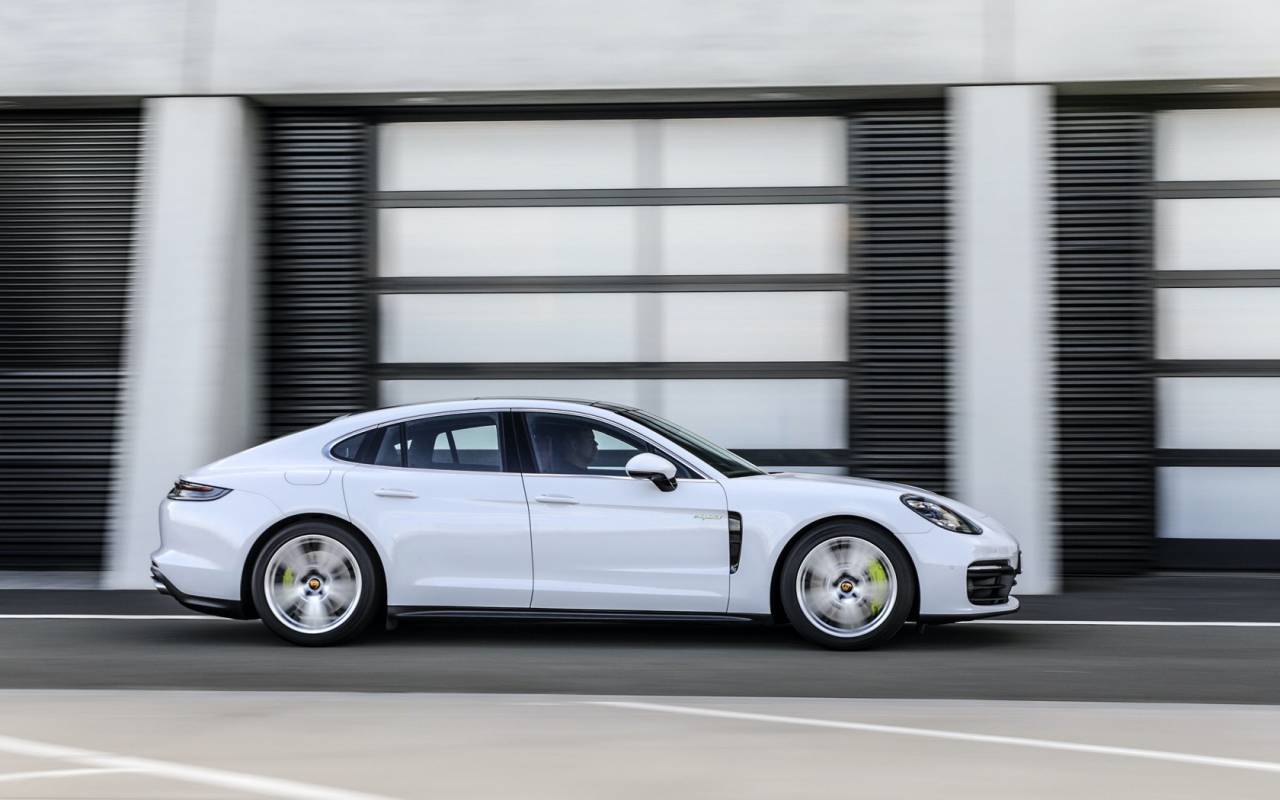 Porsche Active Suspension Management (PASM) is standard across the board, with new calibration for the adaptive dampers. Porsche says that contributes to better ride quality, while steering has been tweaked for better feedback and responsiveness. 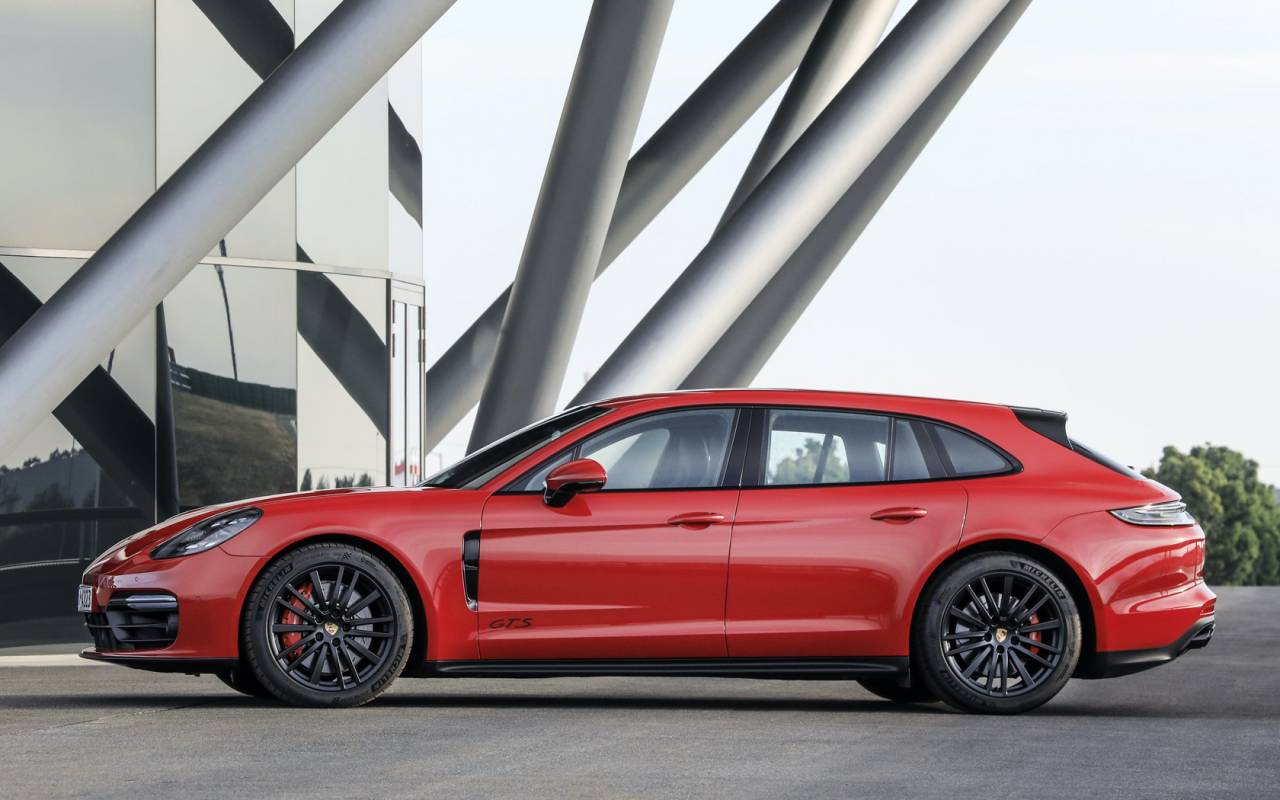 Outside, there are a number of visual tweaks to distinguish the 2021 model year car. The SportDesign front fascia is now standard, rather than an option, and there’s a new SportDesign package – available with or without carbon fiber – as a new upgrade. At the rear, there’s Porsche’s familiar light strip running right across the trunk, and a new lower rear fascia with diffuser fins.

New 20-inch and 21-inch wheel designs are available, while the 2021 Panamera GTS gets its own Satin Black 20-inch Panamera Design wheels. They’re combined with GTS-exclusive fascia front and rear, tinted taillights, and special black badging. The Sport Exhaust System – standard on the GTS – is tweaked for a better soundtrack, and it’s available as an option on the Panamera Turbo S. 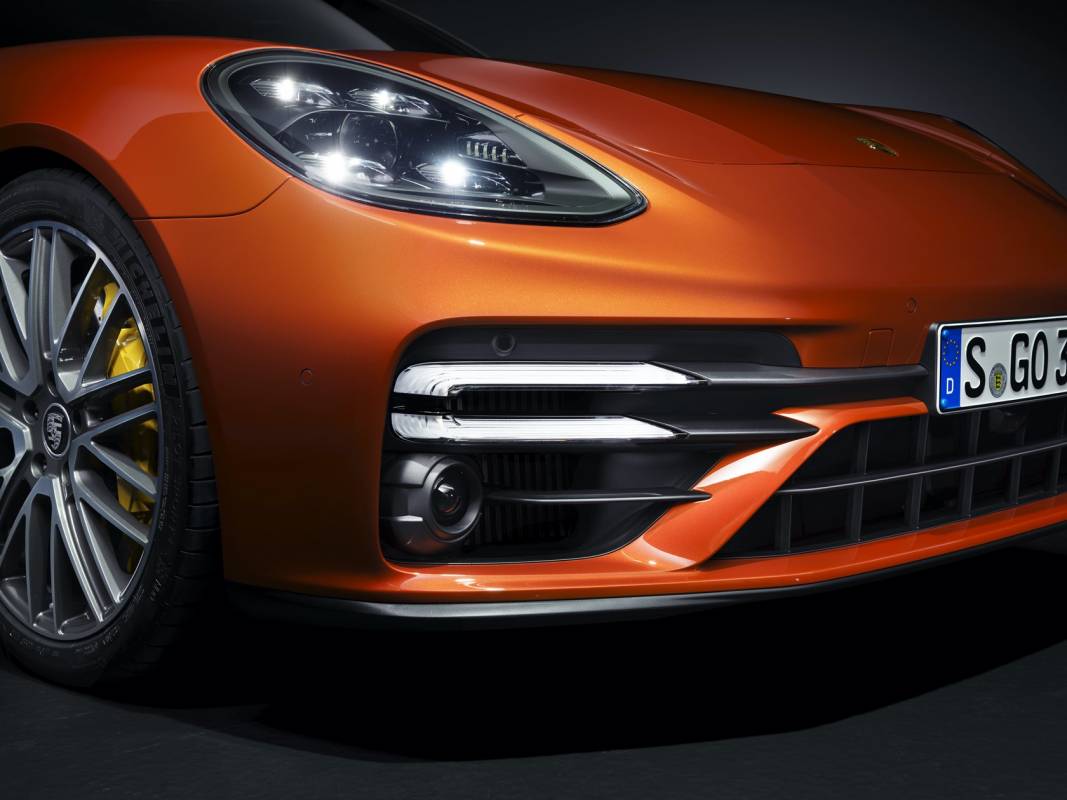 The Turbo S versions get special front fascia of their own, including larger air intakes. They also have special front light signatures, too.

Most of the powertrains can be mixed and matched with the three body styles: sedan, Sport Turismo, and the longer-wheelbase Executive. The latter gets 5.9-inches more length between the wheels, used to expand rear seat space. Porsche is also adding two new colors, Cherry Red Metallic and Truffle Brown Metallic. 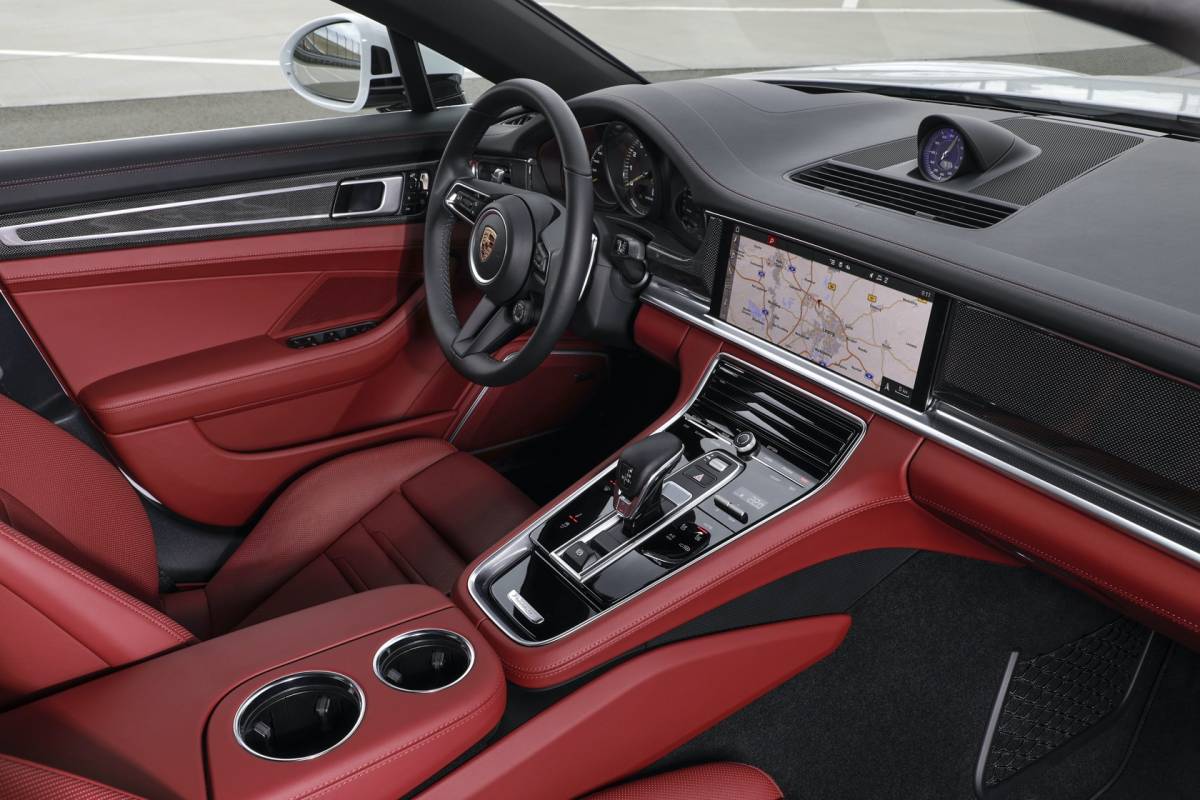 In the center console, the 12.3-inch touchscreen uses Porsche’s latest infotainment system, and has embedded cellular data and WiFi hotspot support. The Turbo S gets a 14-speaker, 710W Bose audio system with subwoofer as standard; it’s optional on all other models, as is the 21-speaker, 1,455 watt Burmester version. That packs a 400 watt active sub. 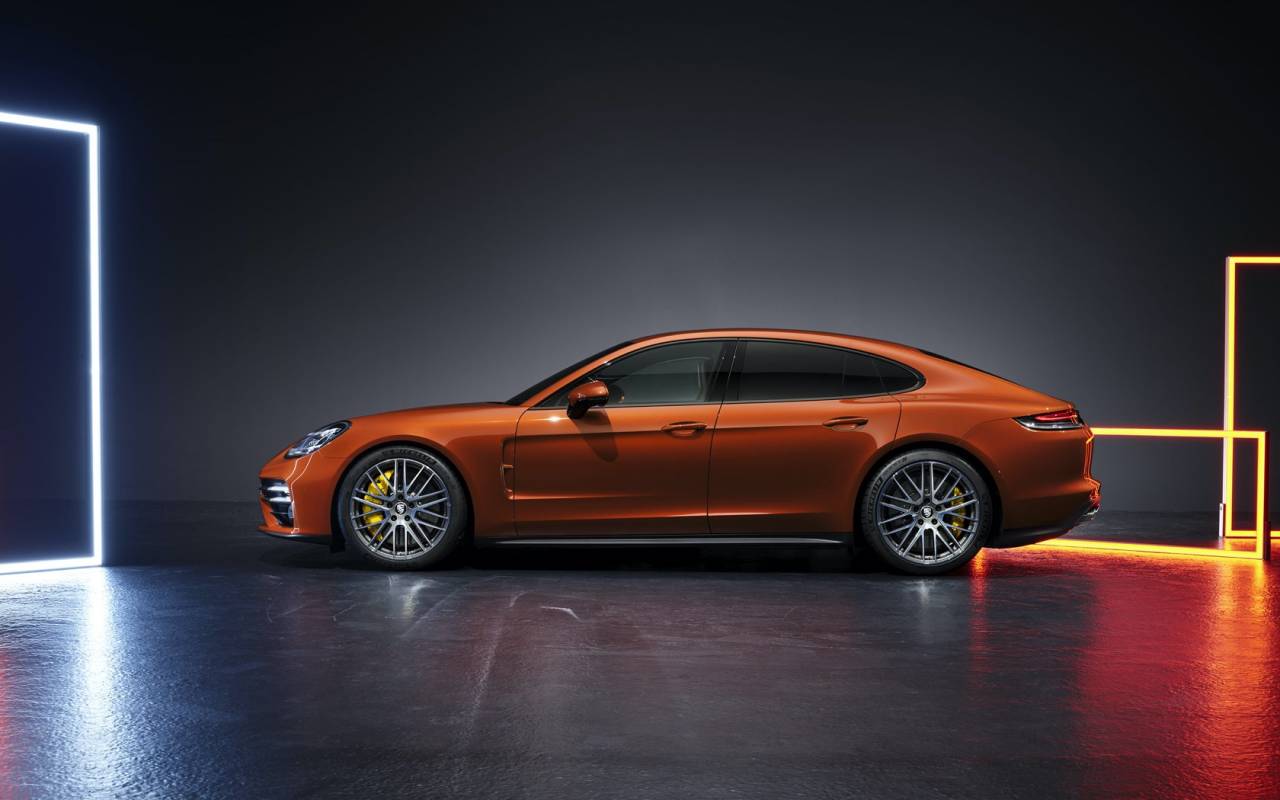 As for driver-assistance tech, there’s Lane Keep Assist and Traffic Sign Recognition as standard. It can help keep the car in the lane at speeds above 40 mph. Porsche InnoDrive with Adaptive Cruise control is an option, as is a head-up display, night vision, surround view, and Lane Change Assist.

Pricing for the 2021 Panamera – and the various options – will be announced closer to the car going up for other, which Porsche says to expect early in the new year in the US. It’ll arrive in American dealerships come Spring 2021.