The 2021 Jaguar F-PACE needed a serious interior upgrade, and now it has one and is all the better for it, and if that sounds blunt then it’s only a reflection of just where the luxury SUV’s real problem always lay. Sure, for the new model year and this mid-cycle refresh, the British automaker also tackles range complexity and tidies up its pricing, but the reality is that cabin not concept had been the F-PACE’s problem from the start.

Outside, the F-PACE was always a looker: this 2021 model year refresh simply tidies that up a little more, like your first post-pandemic haircut. The big grille and squinting headlamp combo remains, then, only the quad-LED lights are reworked and there’s a new mesh design. The hood is new, too, while the front and rear bumpers have been reworked. 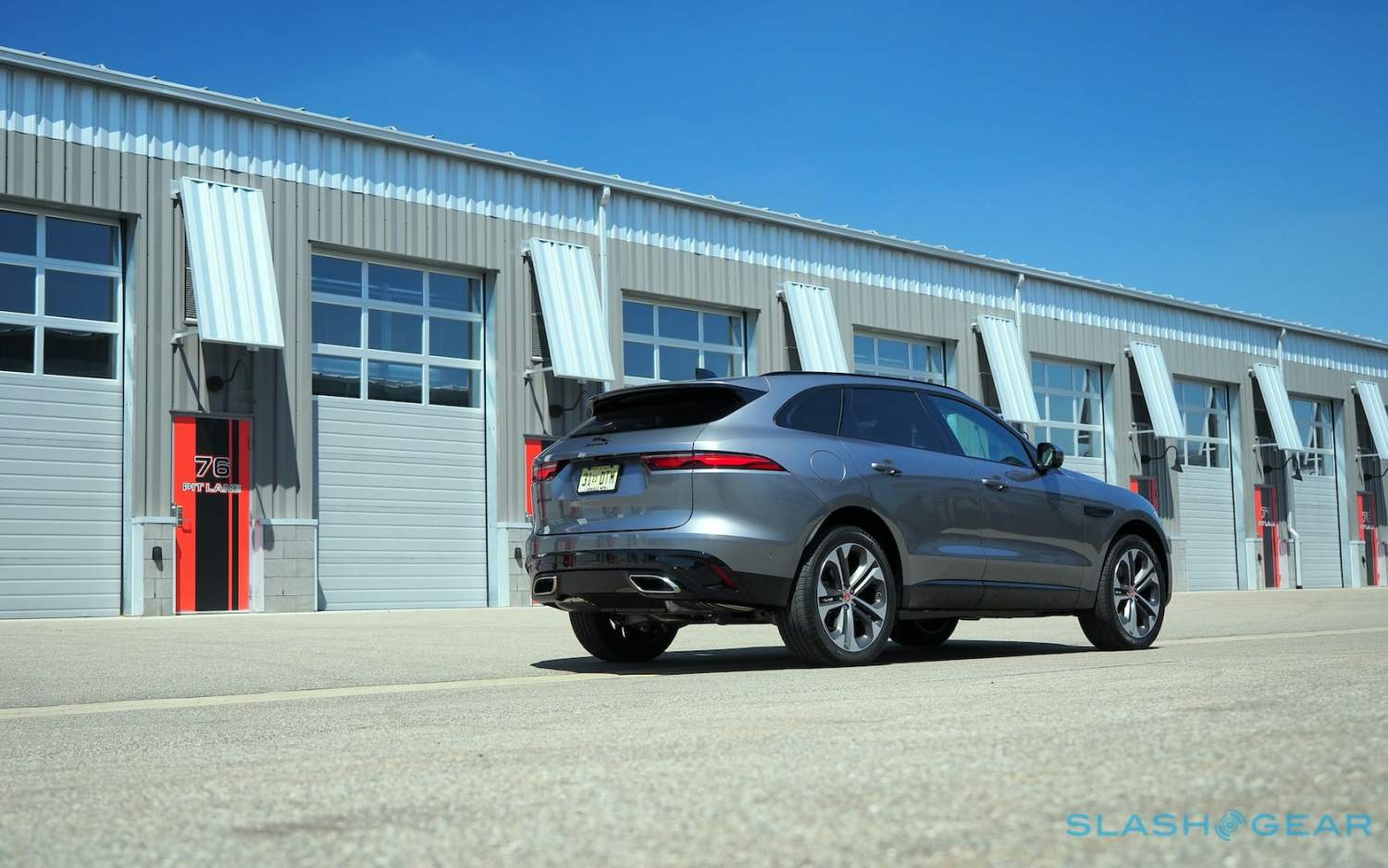 I’ll confess, at first glance (and even second) it didn’t look all that different, especially without an “old” F-PACE to contrast it with. The bigger takeaway, though, was that this is still a mighty handsome SUV, even with the original design dating back to 2015.

Since then, of course, the SUV market has accelerated into pole position in the automotive industry. Jaguar is not unaware of that fact: all but one of its sedans have been retired in North America, the also-revamped 2021 XF the lone remaining option, as it focuses on bigger demand in utility vehicles and crossovers. 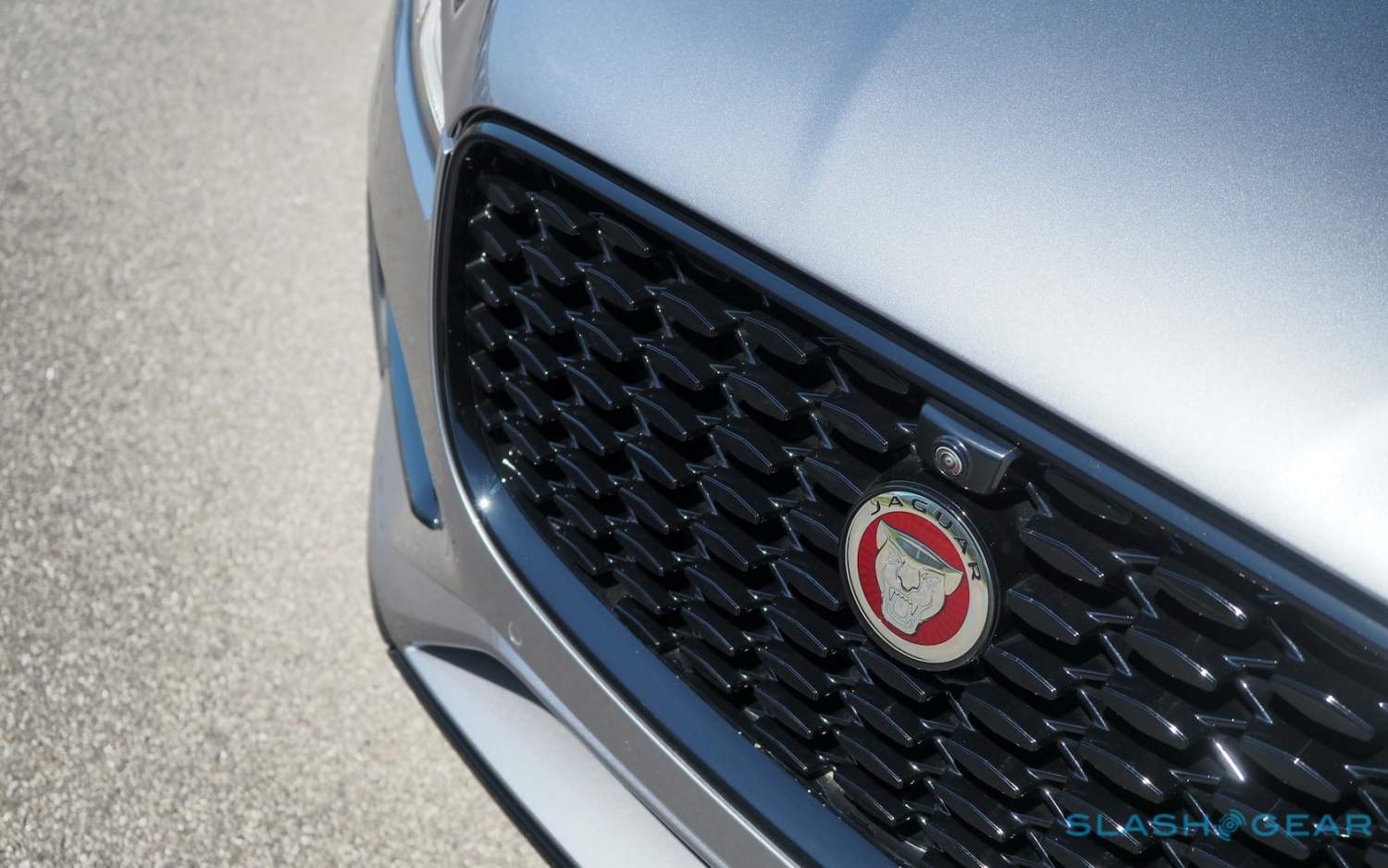 You can’t fault Jaguar’s ambitions with the F-PACE. The automaker says its main competition is BMW’s X3 and X4, Mercedes’ GLC and Audi’s Q5, and Porsche’s Macan. That’s basically the go-to roster of luxe for drivers who not only want to feel special behind the wheel, but who want everyone else to know they’re feeling special, too.

Problem was, the old F-PACE interior didn’t hold up to those aspirations. Jaguar’s designers had gone for a sleek, near-minimalistic aesthetic – think “upscale British Hi-Fi component company with a near-unpronounceable name” – but nobody else at the automaker had the budget to actually make that. The end result was plasticky and uninspiring. 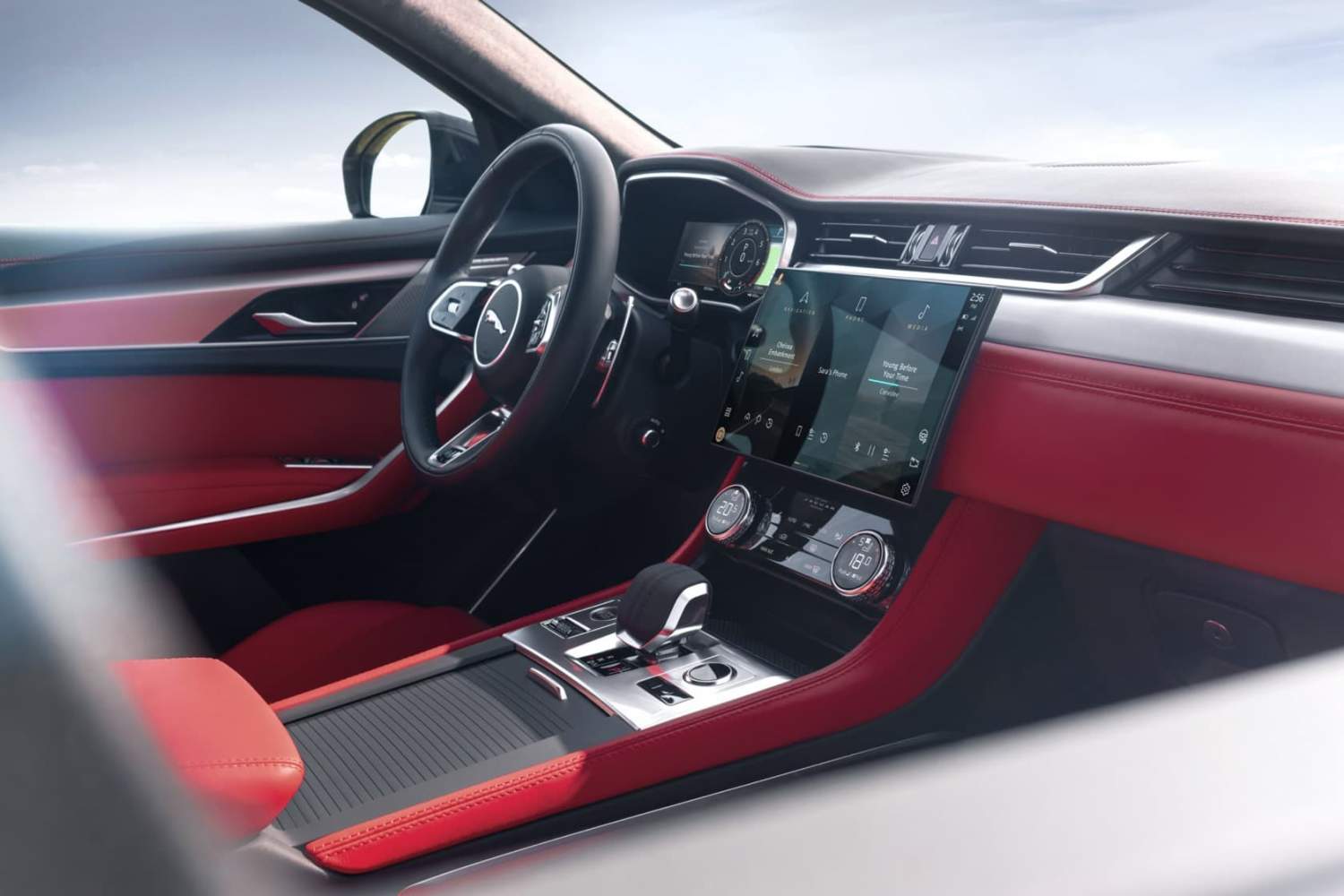 That’s not something you can say about the 2021 F-PACE’s cabin. As with the 2021 XF, the inspiration was apparently “contemporary British” and that involved junking just about everything that was in there before. There’s a new wheel, new dashboard, new trim pieces in real aluminum, leather, and open-pore wood, and new door casings.

It absolutely looks the part, kicking off with the sizable 11.4-inch curved touchscreen in the the center console. That protrudes just slightly: enough to emphasize its gently bow. Below are two HVAC dials and touch-sensitive buttons with effective haptic feedback, and then a new shifter with cricket-ball-inspired stitching. 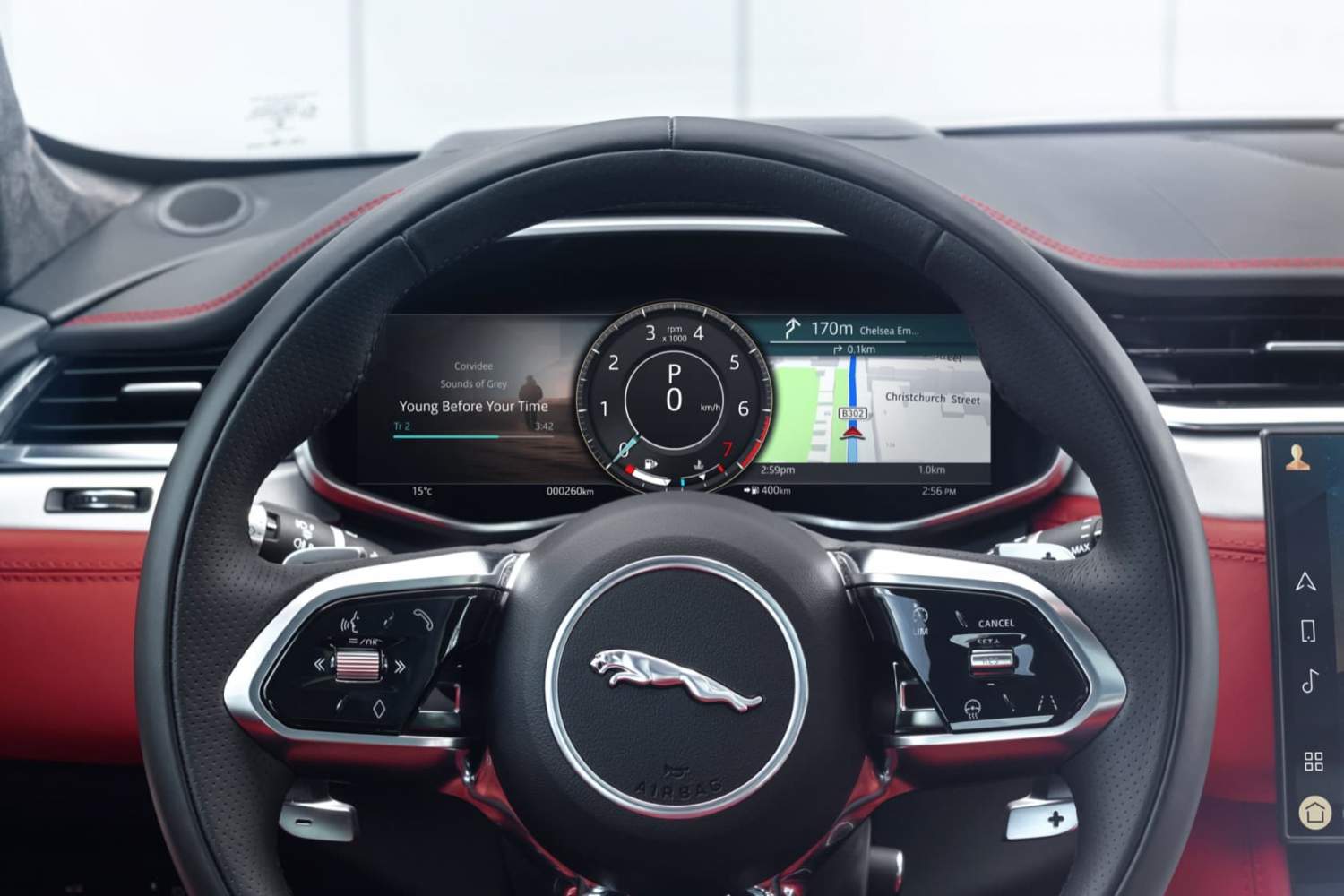 Upper-spec models get a fully-digital driver’s display, with crisp and restrained graphics, and generally there’s a whole lot more consideration around the frequent touch-points. The paddle-shifters clack nicely; the leather-wrapped wheel is just the right size and thickness; the new seats are pleasingly bolstered and feature cleverly embossed Jaguar logos in the headrests. Those seats get heating as standard, now, too.

That’s because the same right-sizing strategy Jaguar took with the XF has been carried over to the F-PACE as well. There used to be 12 versions of the SUV to decide between; now there are just five. The starting price is a little higher now – $49,995, rather than $45,200 – but standard equipment levels are higher with it. 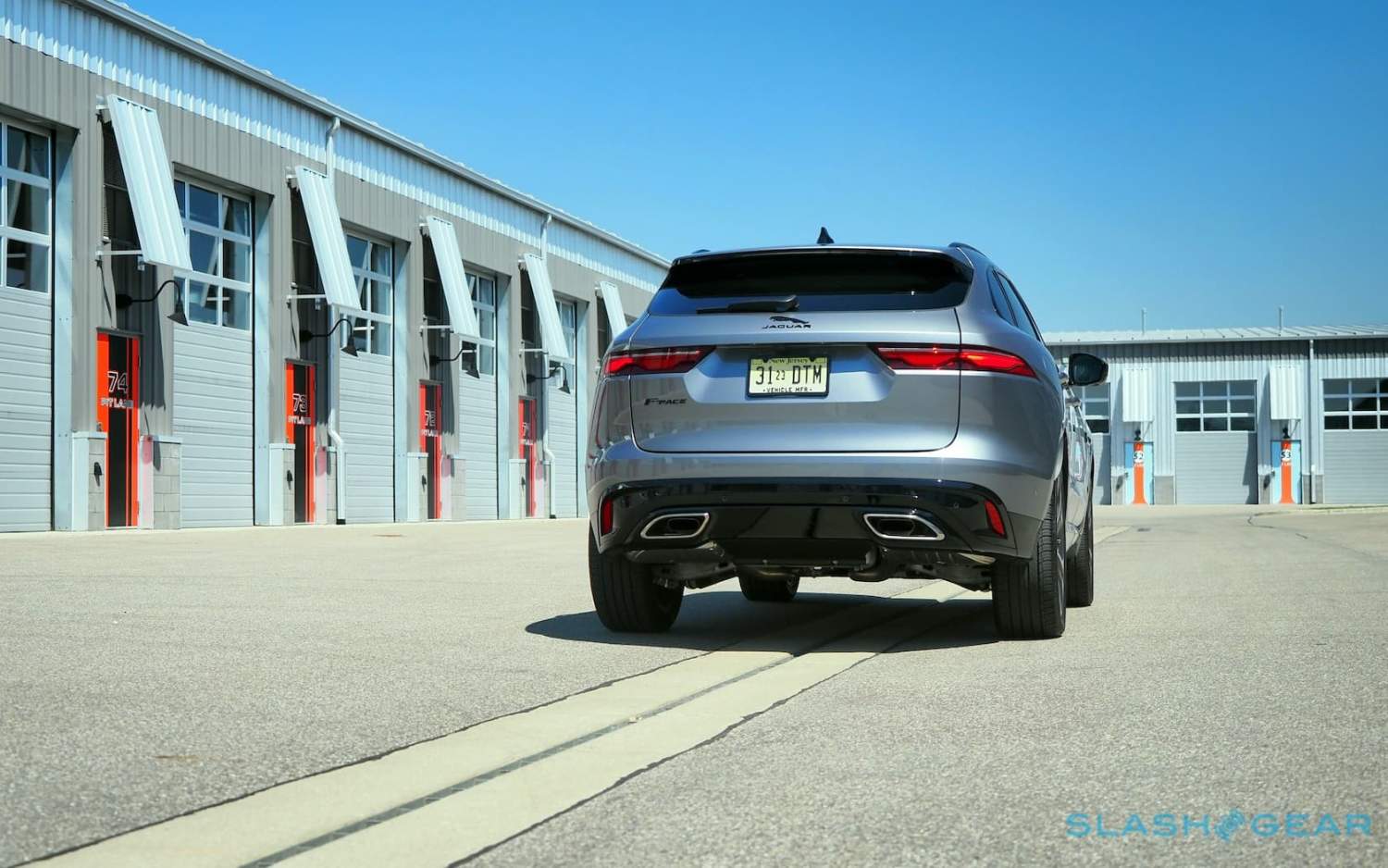 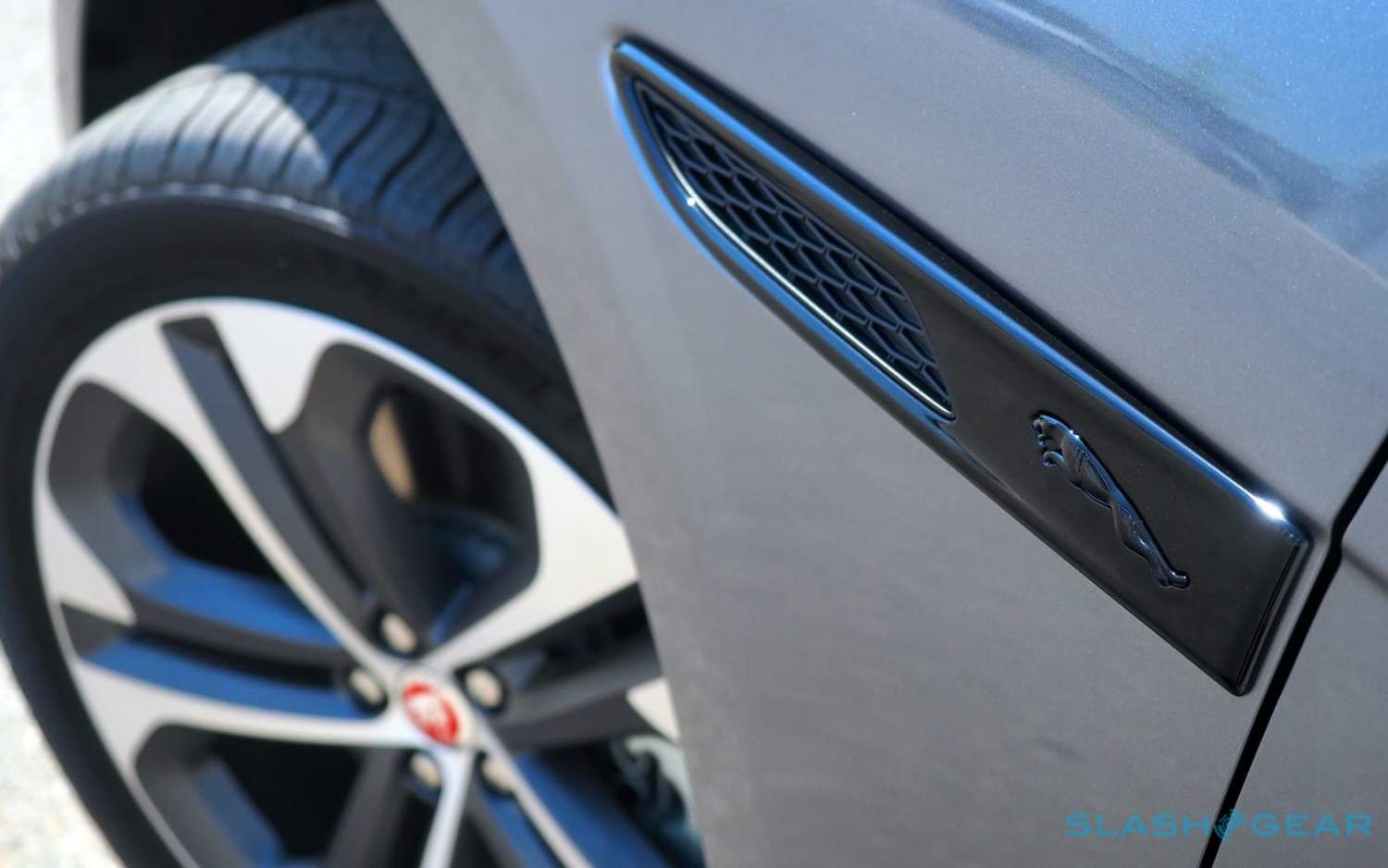 Jaguar’s tuning errs on the firm side, but then again so does that of the Germans it sees as prime competition. The P340 gets adaptive dynamics which help add more distance between its different drive modes, and while eager drivers may want to look to the R-Dynamic trim with its even more potent 395 hp P400 engine, there’s more than enough from this mild-hybrid to keep things feeling urgent.

Indeed it drives a whole lot like the 2021 XF that I had back-to-back with it, and considering that’s an entertaining sports sedan that rides several inches lower I think it’s testament to how well Jaguar’s tuning holds up. Is a Macan sportier still? Well sure, but at that point you’re looking at a Macan S that starts at least $1k over the Jaguar but with an equipment shortfall, and the F-PACE has a roomier cabin too. 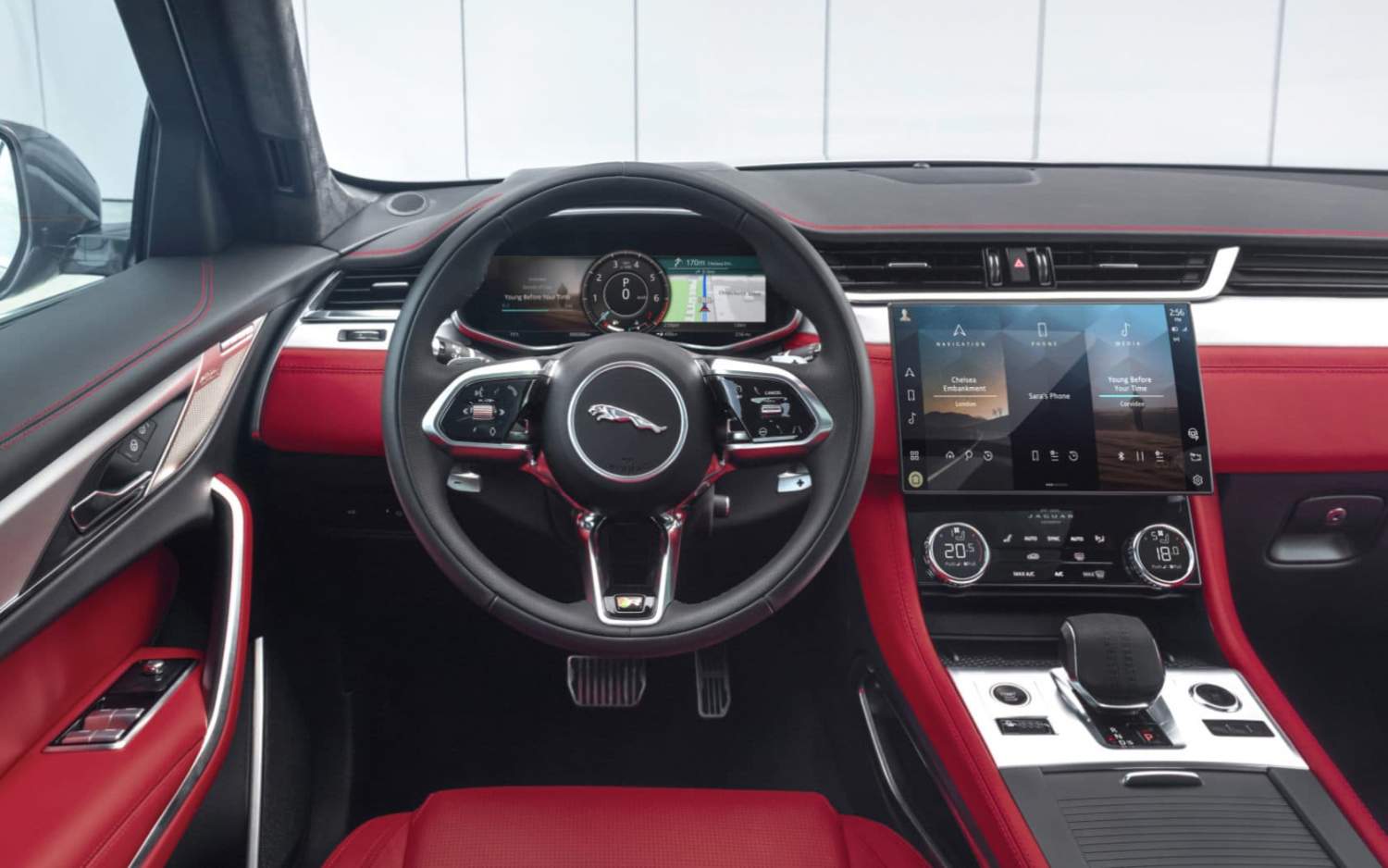 Roomier, and with a far improved infotainment experience too, a leap ahead compared to the occasionally sluggish system in the old F-PACE. Pivi Pro has Apple CarPlay and Android Auto – wired only for the moment, sadly, though a wireless phone charger is standard across the board – but you might not be so eager to cover up Jaguar’s interface this time around. The UI is streamlined, with three home screen panes and 90-percent or thereabouts of the most commonly-accessed features at most a single level of navigation away. 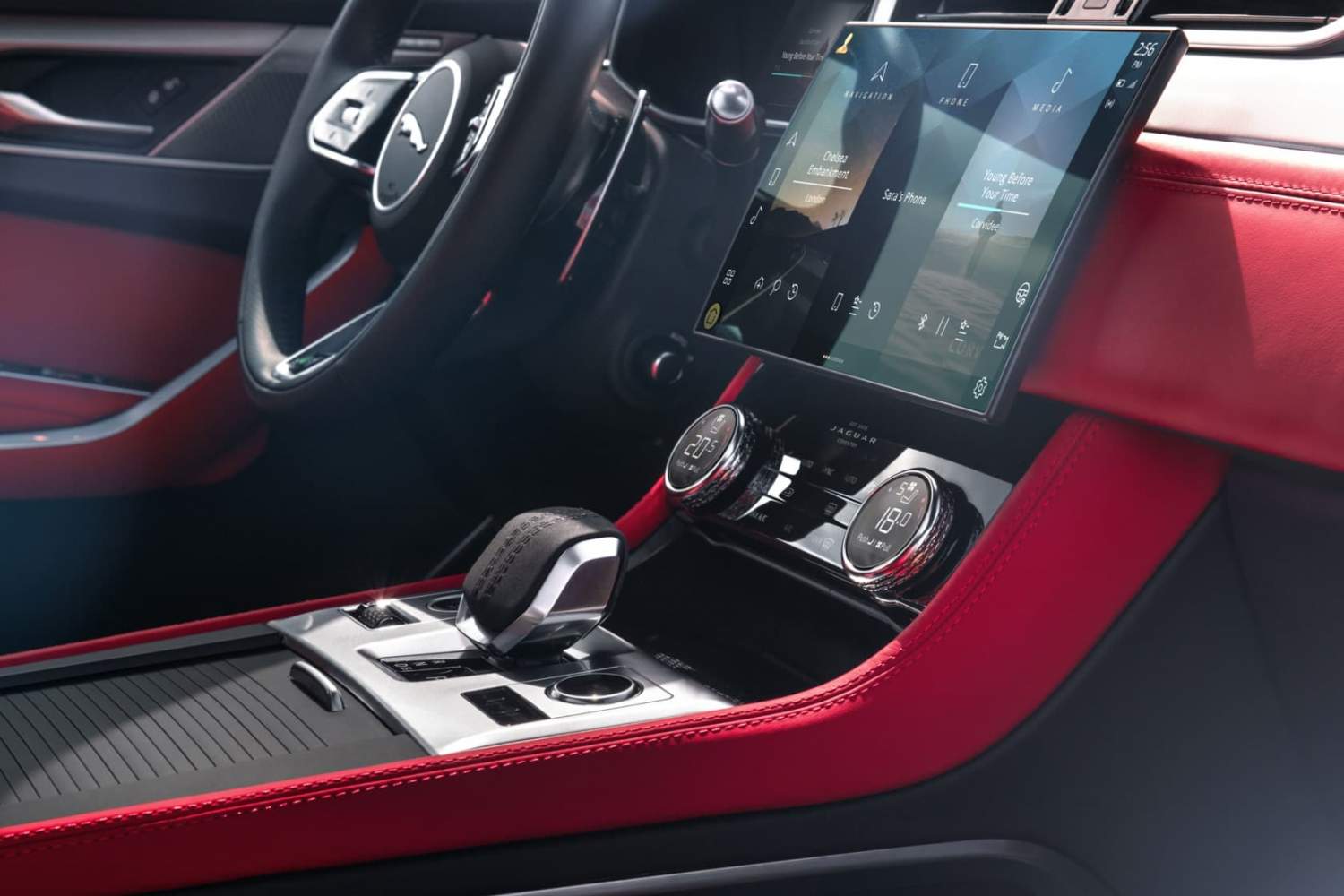 It looks good, is generally smooth (though I did see a couple of pre-production stumbles), and Jaguar says it’ll do things like progressively learn from you and begin flagging potential traffic disruption on your common routes. Then, Pivi Pro will automatically provide turn-by-turn guidance for a detour until you’re back on familiar roads. One of the things that increasingly complex in-car tech is being accused of – and in many cases rightly so – is being too distracting, so I like the idea of Jaguar’s system surreptitiously picking up some of the slack without being ostentatious about it. 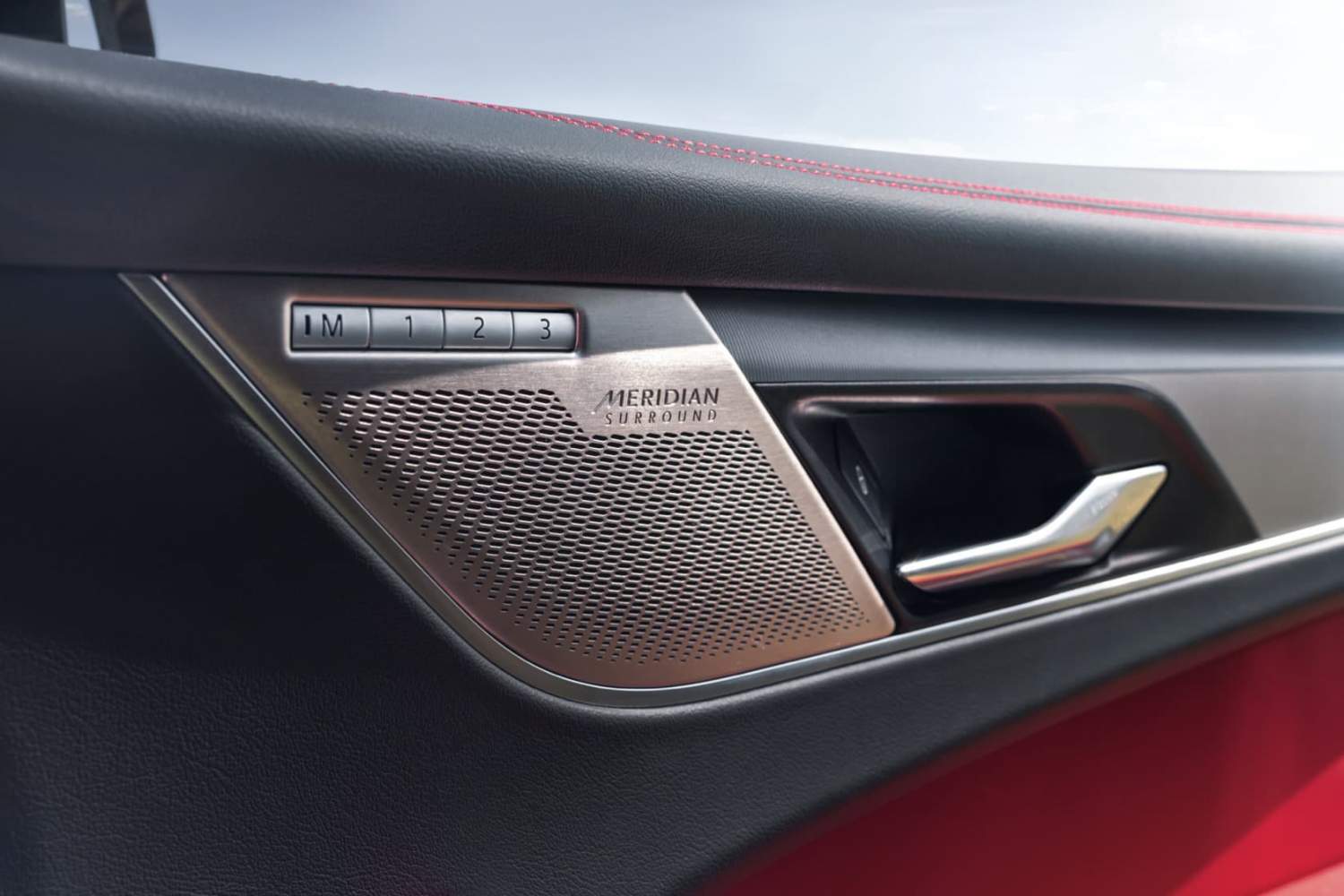 All that’s standard on the F-PACE S up, as is a panoramic sunroof, Meridian audio, dual-zone climate control, ambient lighting, SiriusXM, cruise control, 360-degree cameras, blind-spot monitoring and assistance, lane-keep assistance, rear traffic monitoring, and traffic sign recognition. My tester came with the $2,110 Hot Climate pack which doubled the HVAC zones, added a PM2.5 filter, and cools the glovebox (vital, since I insist on my open-backed, perforated calfskin driving gloves being chilled before I tug them on). 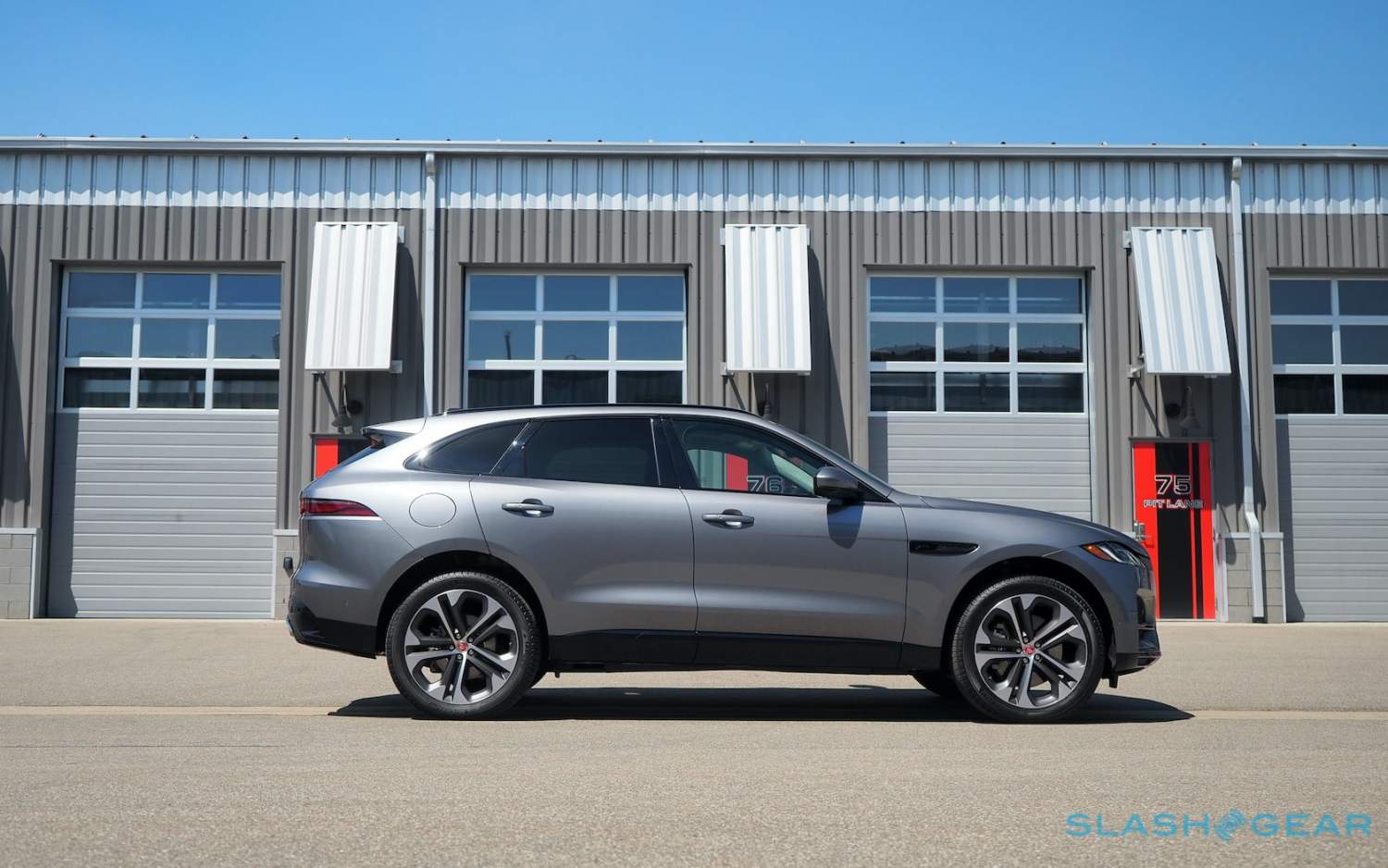 The $2,220 Premium Upgrade Interior pack added more leather, illuminated metal treadplates, and some other cabin niceties, while $2,325 threw in heated, cooled front massage seats (which aren’t as good as the Germans’) and $800 an upgraded Meridian Surround Sound system (which is definitely worth it). With other options, including the glorious 21-inch wheels, a head-up display, fancier seat hide, and a WiFi hotspot, things had spiraled to $75,640 including destination.

That… is a lot. Only $10k out from that SVR and more, quite honestly, than I think you should spend. The reality is that you really don’t need to go wild with the options to make the F-PACE feel like something special. 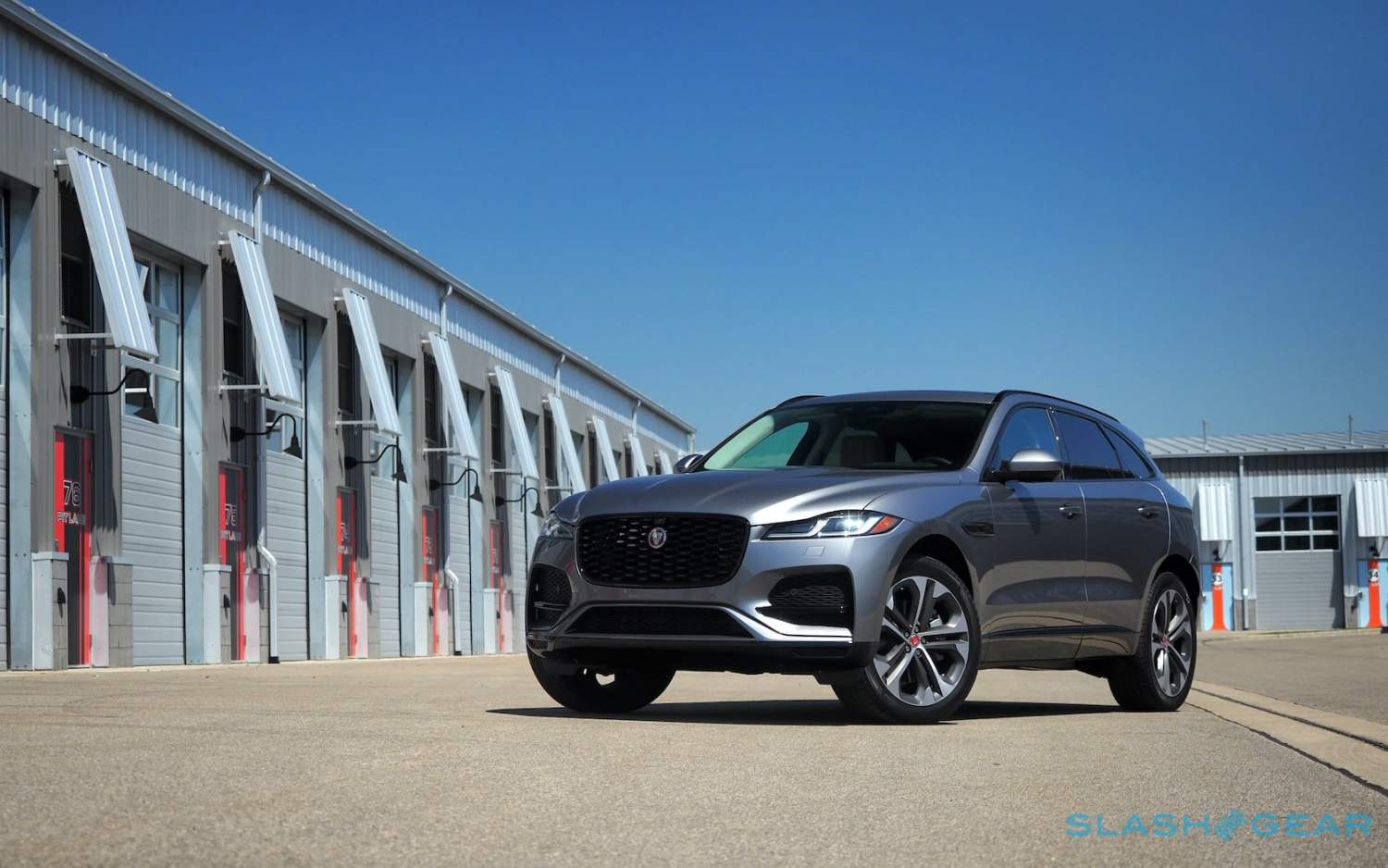 Its driving dynamics and exterior style do that alone, and now the cabin means your smile will continue even as you slide behind the wheel. The only thing really missing is a serious push into electrification, something which is left to the all-EV I-PACE right now. Jaguar’s reinvention calls for electric-only launches in the future, though it may be a little while before the whole line-up chews through electrons rather than gasoline.

In the meantime, then, this 2021 F-PACE finally feels more like the all-round package Jaguar needs to properly compete with its German rivals.