2020 Volkswagen Atlas Cross Sport is roomy to a fault

From the onset, we knew the 2020 Volkswagen Atlas Cross Sport is a roomy five-seat SUV. But how roomy is it compared to other SUVs? With today’s enormous variety of crossovers, subcompact SUVs, and midsize derivatives, it’s hard to pinpoint which is the roomiest of them all. Luckily for us, Volkswagen gave us some insight into why its newest Atlas Cross Sport is among the best in terms of practicality and everyday usability.

The VW Atlas Cross Sport is based on the underpinnings of the full-size, seven-seat Atlas. However, the Cross Sport is 5.7-inches shorter than the Atlas since it doesn’t come with third-row seating, but it has the same 117.3-inch wheelbase as the seven-seat model. This means you get more cargo room than a regular Atlas with enough space for both front and rear passengers to stretch in total comfort. 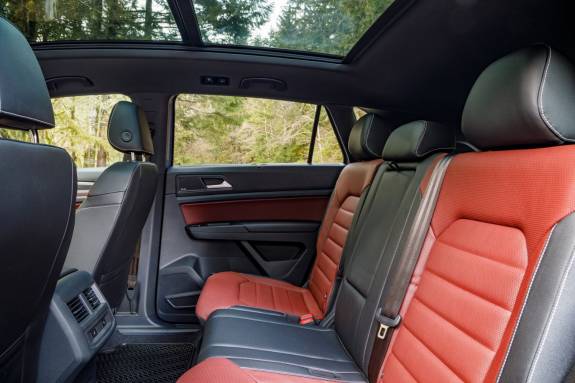 It’s essentially the same story in terms of cargo room. With no third-row seats blocking the way, you have 40.3 cubic feet of cargo space with the second-row seats in the upright position. For some insight, VW said it’s 8.5 times the cargo space of an original VW Beetle and is almost double the trunk space of a Crown Victoria taxicab. Apparently, you get 77.8 cubic feet if you fold down the second-row seats. 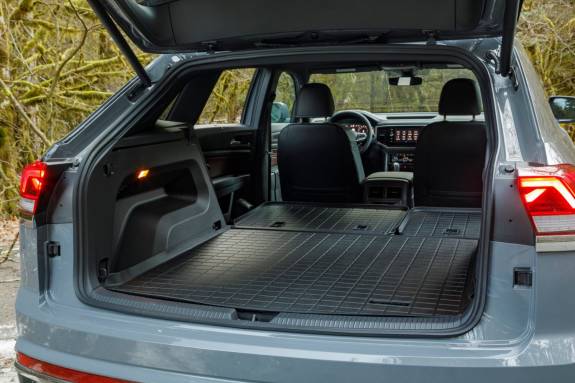 VW also mentioned the huge bevy of cupholders in the Atlas Cross Sport’s cabin. With a total of eleven cupholders (along with numerous cubby holes), the Cross Sport has enough drink holders to replenish a small army of thirsty kids. When properly equipped with the towing package, the V6-equipped Atlas Cross Sport can tow bicycle carriers and utility trailers up to 5,000 lbs.

Both engines are connected to an eight-speed automatic gearbox driving the front wheels. VW’s 4Motion all-wheel-drive system is optional on both engines. Volkswagen’s newest Atlas Cross Sport five-seat SUV has a base price of $31,500 for the FWD model and around $33,500 with AWD. It’s available to order now at VW dealerships.