After all the teasing, the leaks, the speculation, and the controversy, the 2020 Toyota Supra is here. Making its world debut at the Detroit Auto Show 2019, the all-new Supra marks the return of an iconic nameplate and an aggressive collaboration between Toyota and BMW. It also promises to be the first Toyota in some time that you’ll really, really want to drive.

It’s been 21 years since a new Supra launched in the US, and styling tastes have changed. The 2020 Supra has plenty of curves like the fourth-generation car, but this fifth-gen model looks to the Calty FT-1 Concept for its primary inspiration. 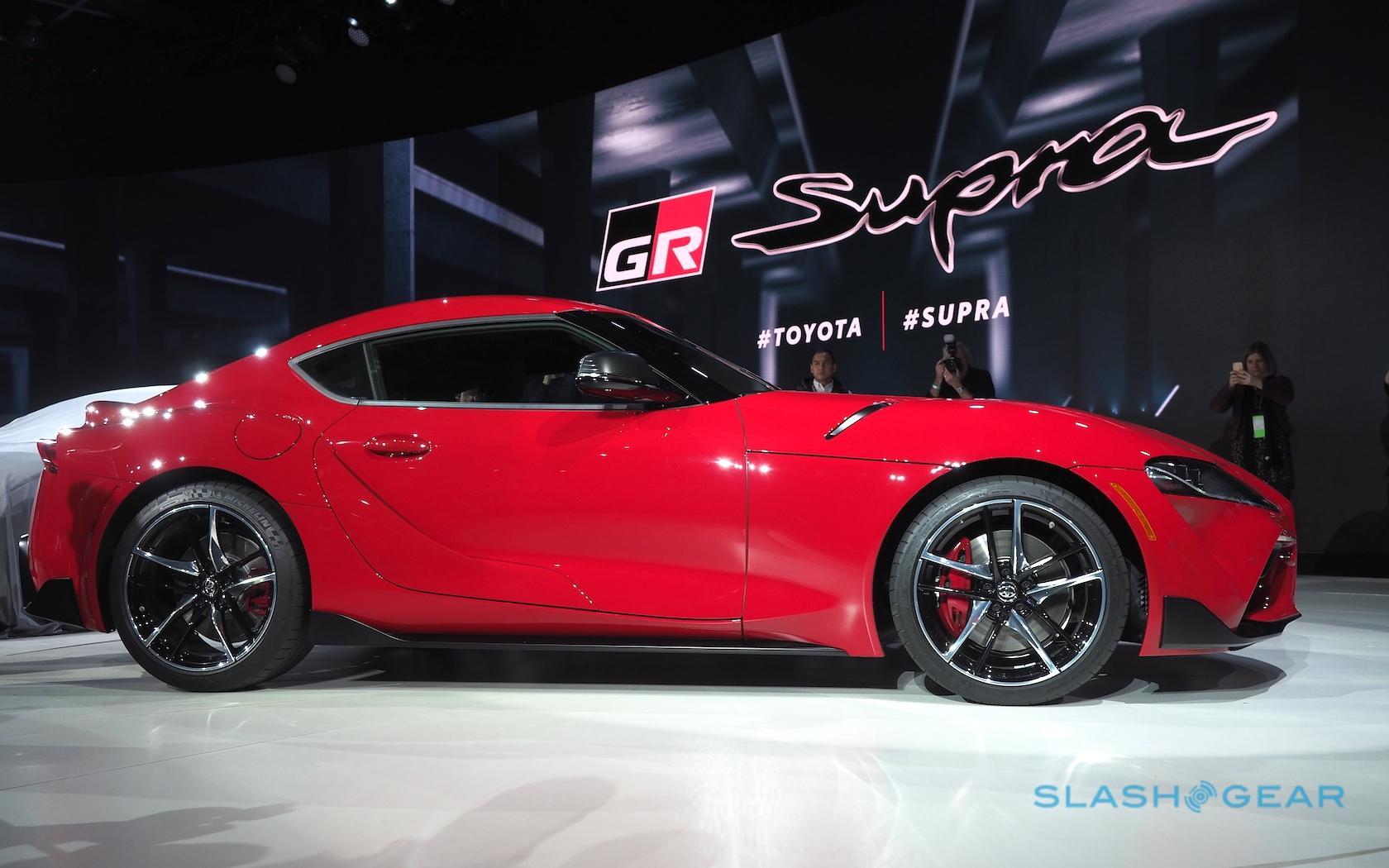 So, there’s a long hood and a stubby passenger cabin pushed right back toward the rear of the car. Toyota calls it “Condensed Extreme,” but more importantly it leaves the 2020 Supra with perfect 50:50 front-rear weight distribution. The side profile is a particular success, the proportions of the car underscoring its inline-six engine and rear-wheel drive.

The front, meanwhile, is likely to be more controversial. In particular, the enlarged central grille and its flanking air intakes are likely to divide tastes; there are perhaps a few too many faux-grilles for comfort, too. The six-lens LED headlamps are suitably complex to echo that fascia’s detailing, while at the rear things are much simpler, with rings that integrate the turn, tail, and stop functions; backup lamps are LEDs embedded in the center of the lower bumper. 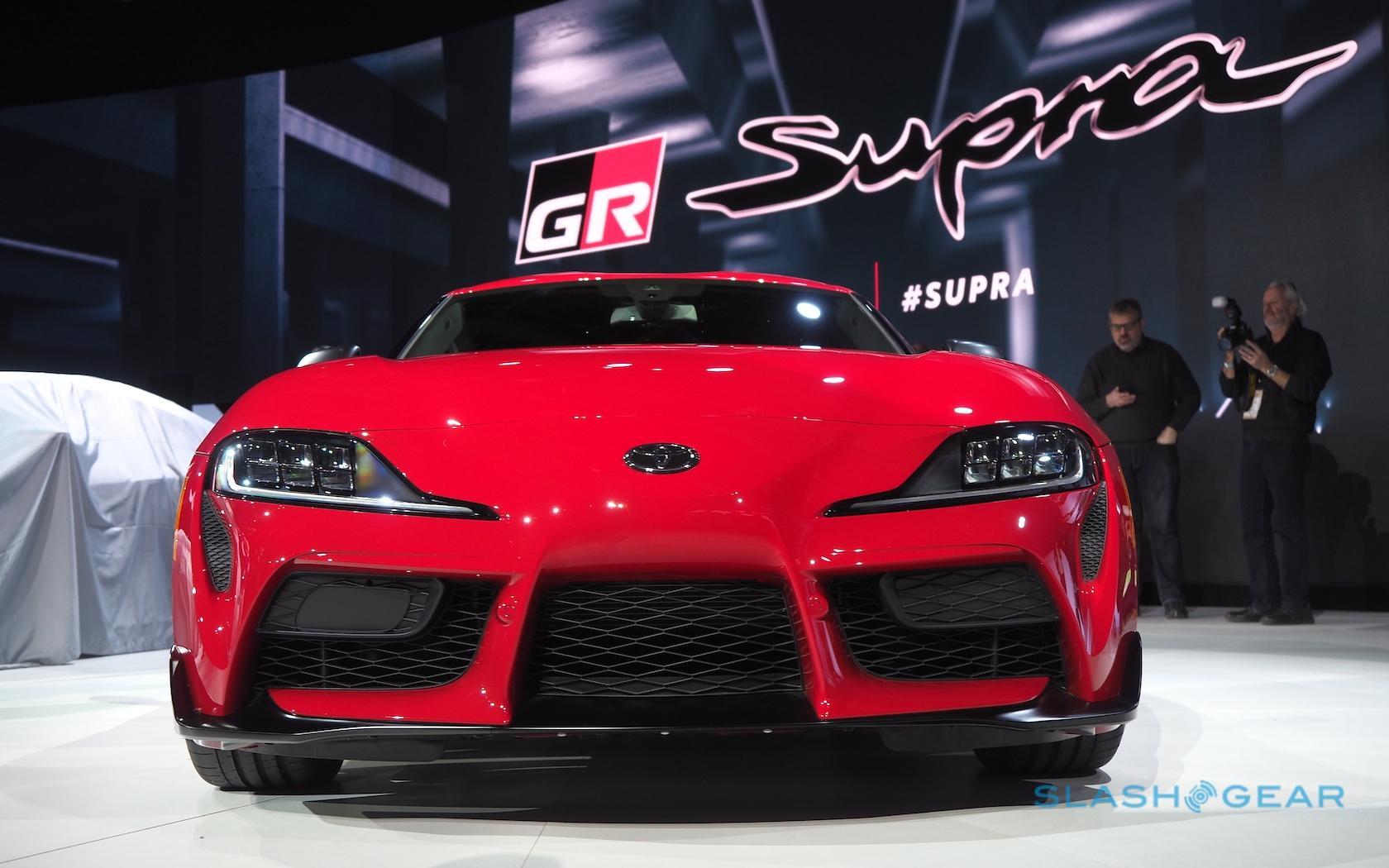 They’re underneath a sizable, arching integrated spoiler, which Toyota says is a nod to the fourth-gen Supra Turbo’s huge rear wing option. Similarly, the double-bubble roof design hints at the classic Toyota 2000 GT. It’s functional, too, though, cutting down on drag. 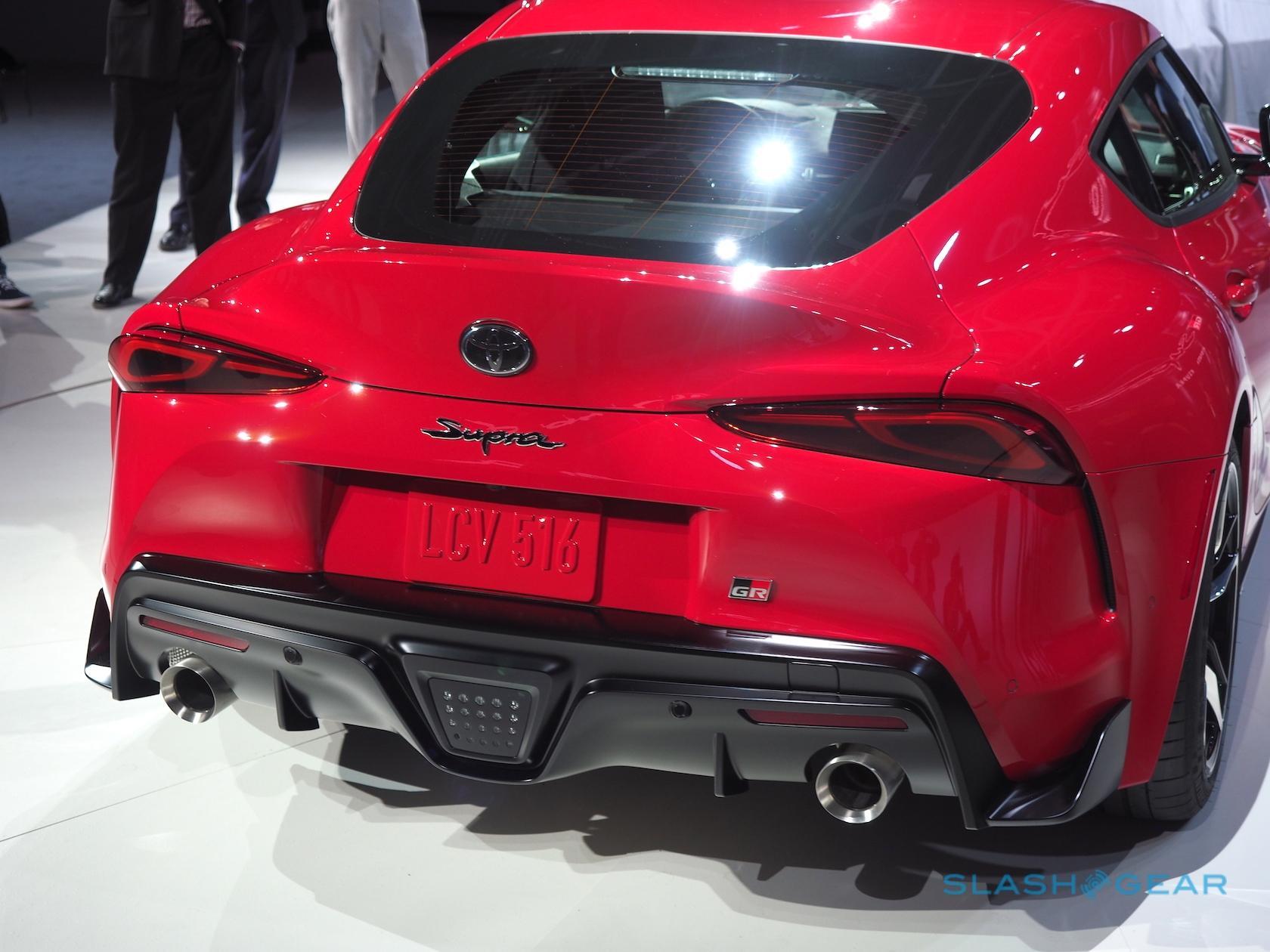 Bright colors will help it stand out, and Toyota has a wide selection to choose from. Red, yellow, and blue will be on offer among the choices; at the other extreme, a matte gray will leave the 2020 Supra looking almost as though it’s been left as unpainted metal. Somewhere in-between will fall more conservative shades of silver, white, black, and dark gray. 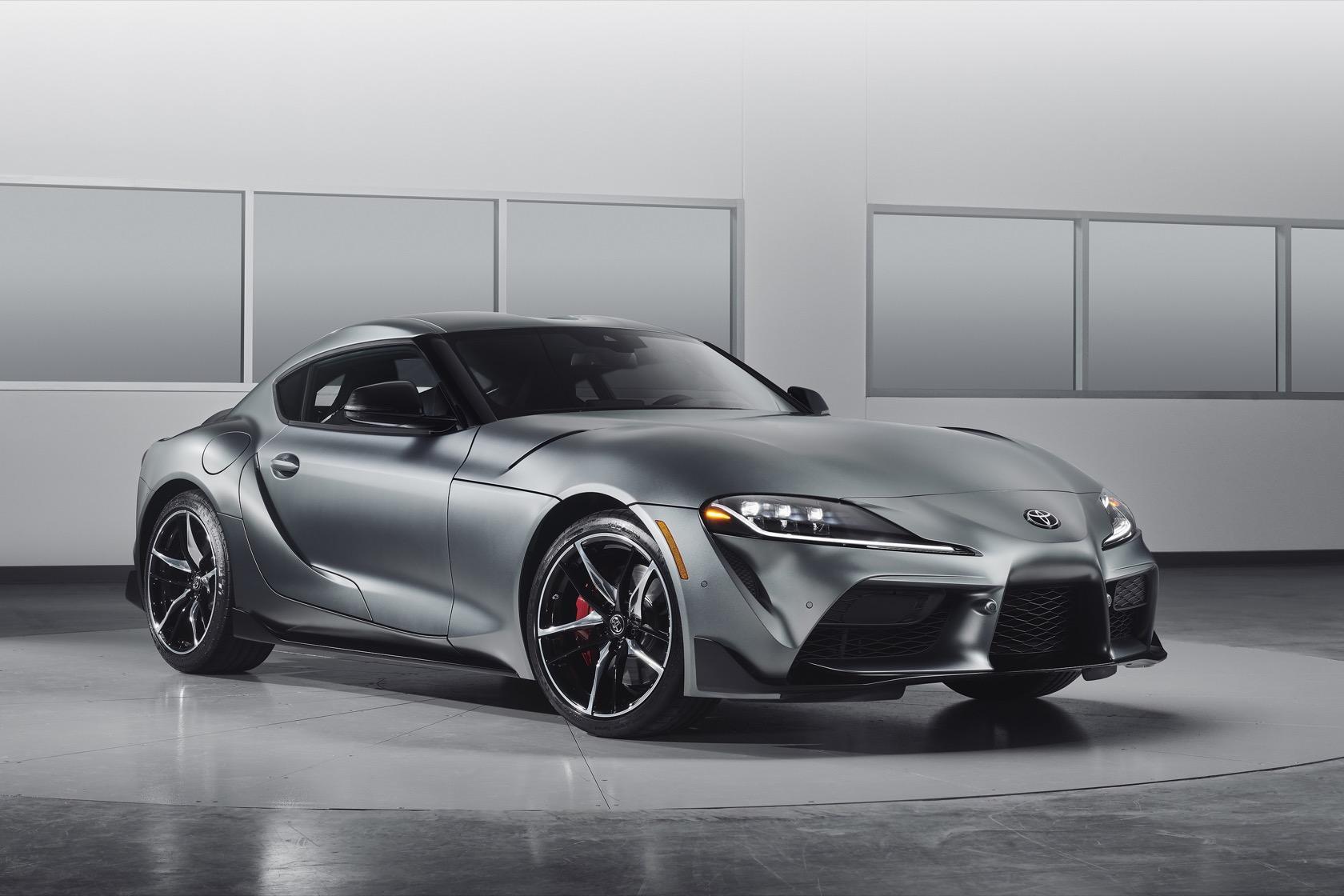 Under the hood is a 3.0-liter turbocharged inline-six engine, with 335 horsepower and 365 lb-ft of torque. Toyota is promising the latter will arrive earlier than you might expect, courtesy of features like the twin-scroll turbocharger, direct fuel injection, and continuously variable timing on the intake and exhaust camshafts. Variable intake valve lift is also used. 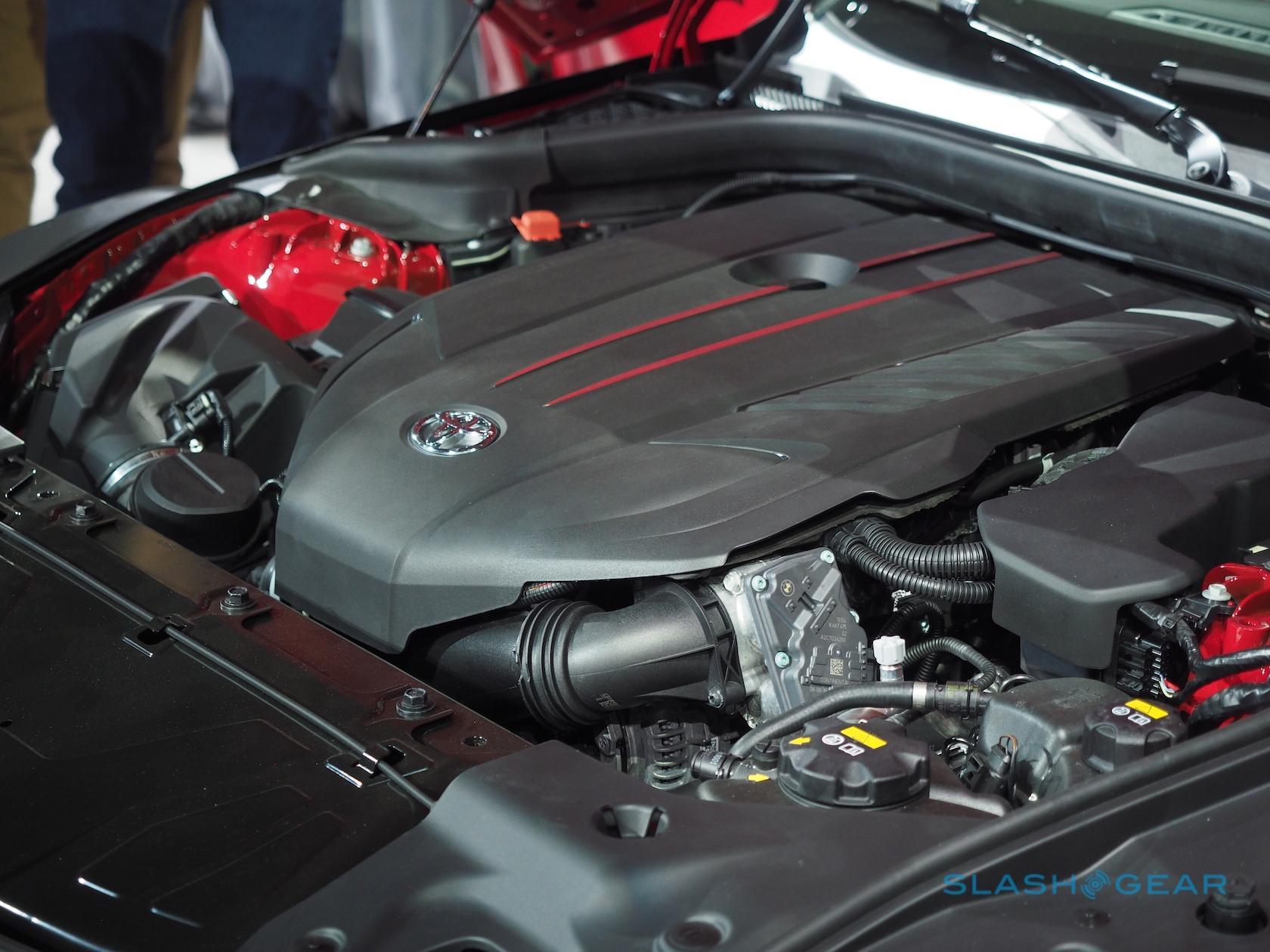 Standard is an 8-speed automatic transmission, with paddle shifters. The lower gears have shortened ratios, while there’s a Launch Control feature too. Toyota is estimating 0-60 mph arriving in 4.1 seconds, with a top speed electronically limited to 155 mph.

Rear wheel drive, the 2020 Supra has an active differential combining an electric motor and multiplate clutches. That will allow anything from 0 to 100-percent of the torque to be diverted between each of the rear wheels. The result is less understeer and oversteer, for tighter cornering. 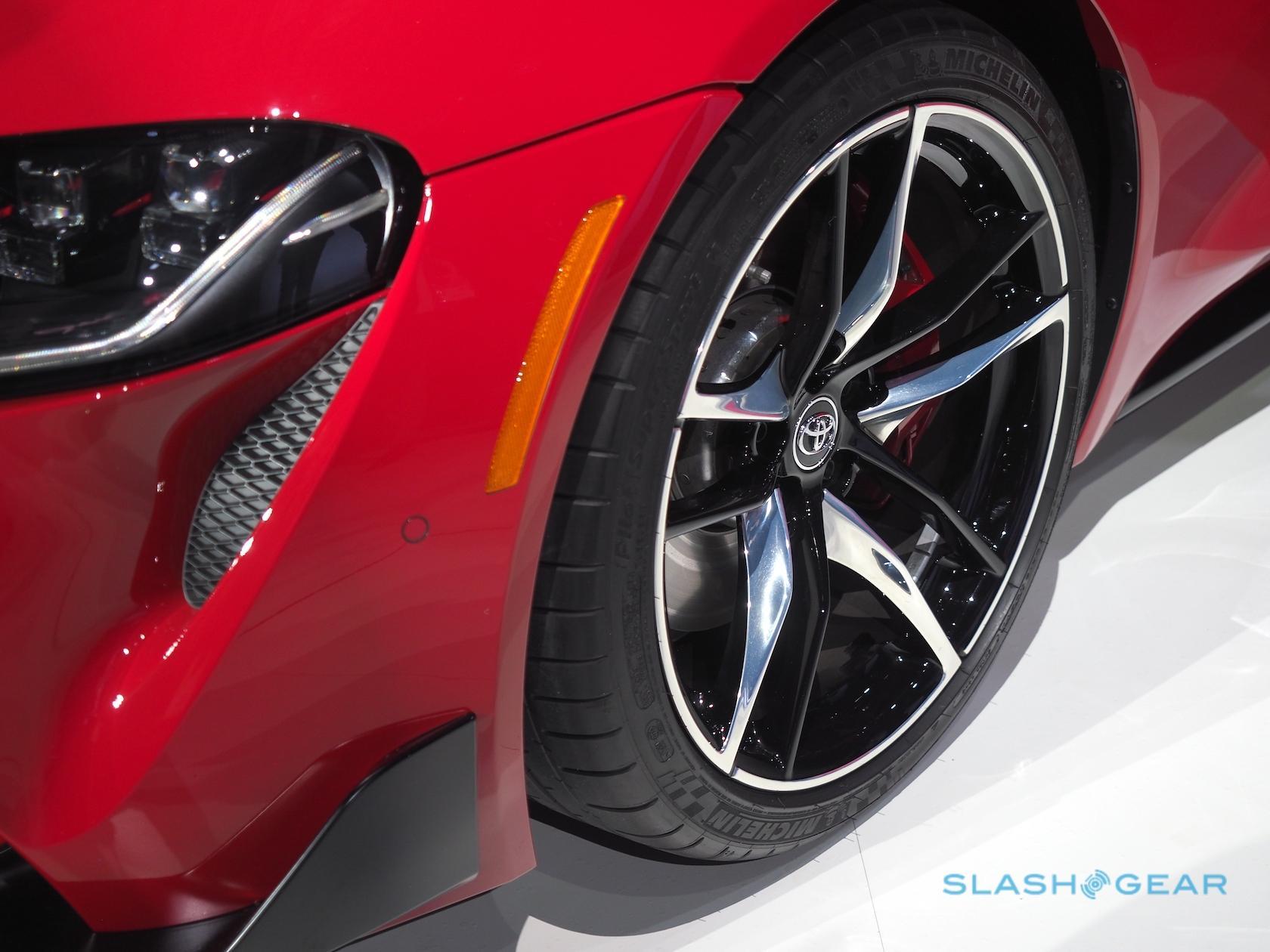 Rather than the dozens of drive modes in other performance coupes, Toyota’s has just two. Normal is designed for everyday driving, while Sport tamps down the traction and stability controls’ interventions. Throttle response gets sharper, the electric power steering is weightier, gearshifts are crisper, the active differential is more aggressive, and the exhaust sound is amplified.

Toyota’s racing team may not be as well known in the US as it is in Japan, but American drivers will still feel the benefits of the Toyota GAZOO Racing’s tuning of the 2020 Supra. Double-joint spring strut front suspension and multi-link rear suspension is used, along with aluminum control arms. The electric power steering supports variable assistance and variable ratios. 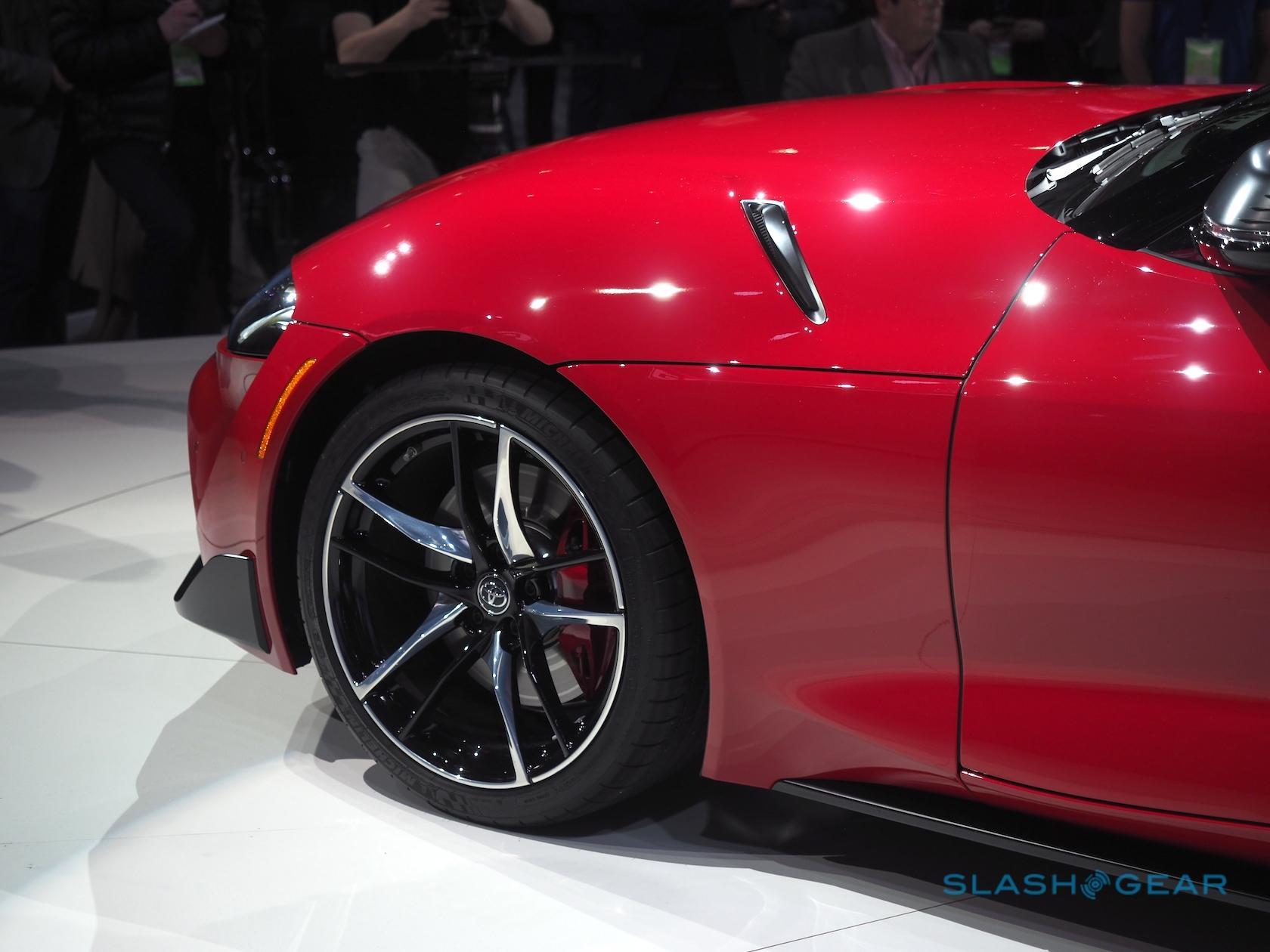 Adaptive Variable Suspension is standard, with Normal and Sport settings, adjusting damping according to how you’re driving and the road conditions.

Nowhere is Toyota’s collaboration with BMW more apparent than when you climb inside. Indeed you could be forgiven for thinking that you’re in a new BMW Z4 – little surprise, there, given the two cars are close cousins. How much of a problem that is depends on how you feel about BMW’s ergonomics. 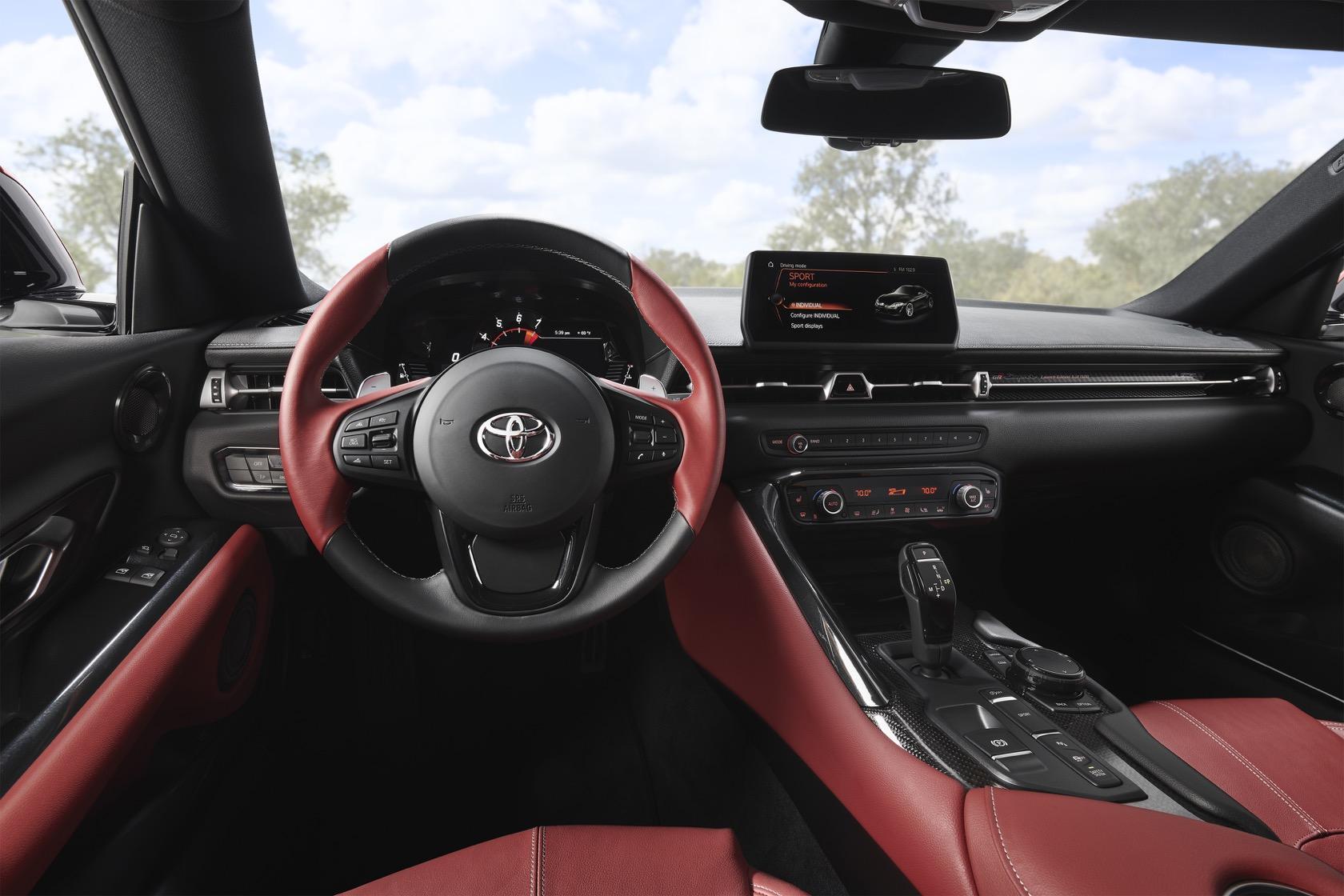 Sports seats, with integrated head restraints, are standard. On the entry-level 2020 Supra 3.0 trim they’ll be clad in Alcantara and have power adjustment with memory; the 2020 Supra 3.0 Premium will get heated leather seats. Both get a luggage compartment that Toyota says should be sufficient for a weekend trip for two. 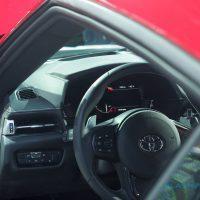 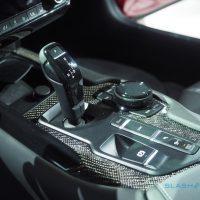 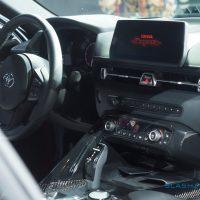 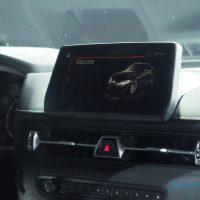 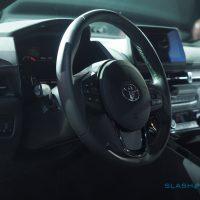 The Supra 3.0 gets a 6.5-inch non-touch display atop the center console, with a rotary controller, Bluetooth, and iPod connectivity. Step up to the Supra 3.0 Premium, meanwhile, and you get an 8.8-inch touchscreen with navigation, Supra Connect telematics, wireless Apple CarPlay support, wireless phone charging, and a 12-speaker JBL Audio system.

First out of the gate will be the 2020 Supra Launch Edition. Only 1,500 will be produced for the US, each individually numbered with a badge on the dashboard and a graphic of Master Driver Akio Toyoda’s signature. The core trim will be based on the Supra 3.0 Premium spec. 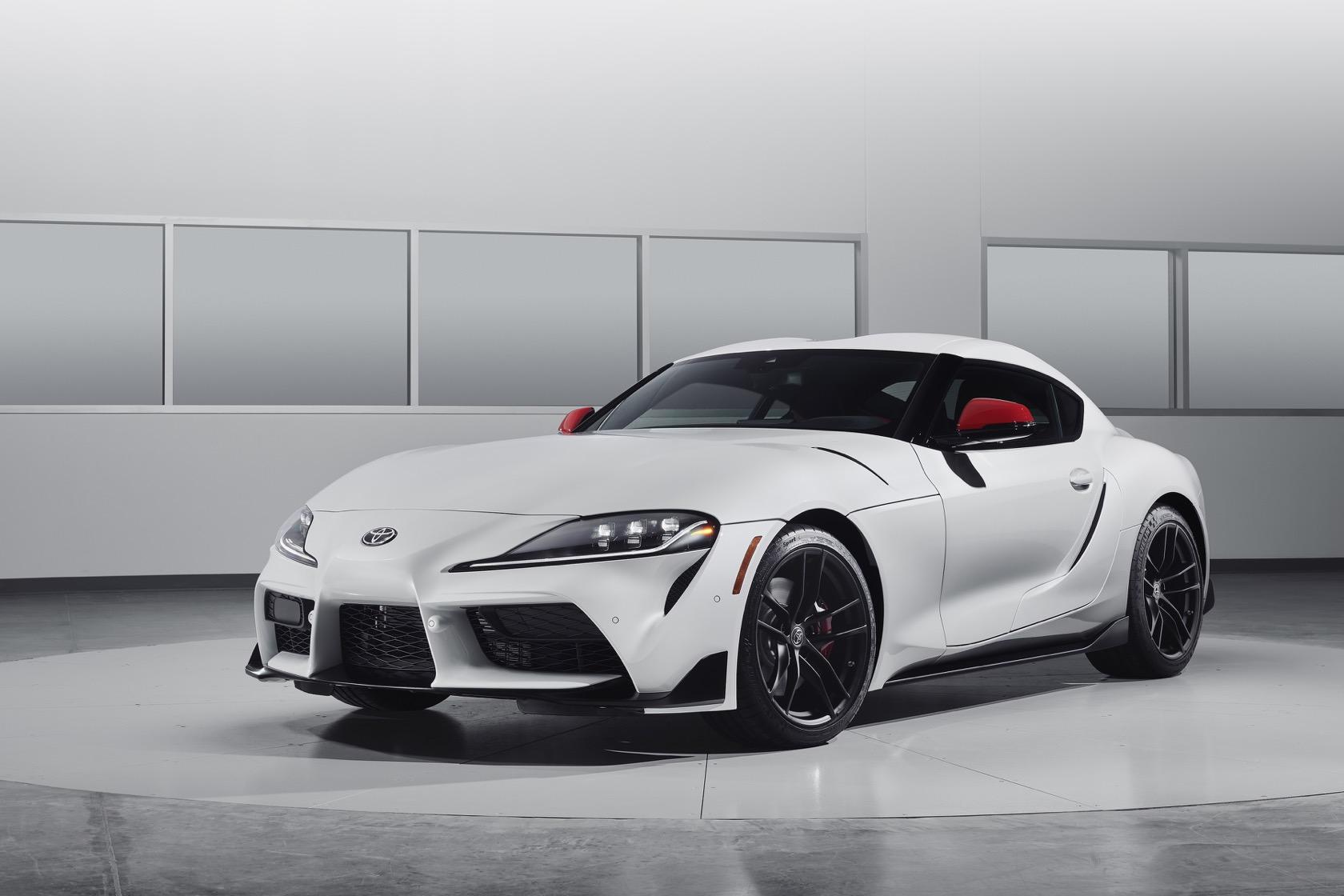 They’ll come in either Absolute Zero White, Nocturnal Black, or Renaissance Red 2.0, each with high-contrast red mirror caps and 19-inch forged matte black alloy wheels. The white and black cars will have red interiors, with red leather seats and matching grips for the steering wheel, along with a red center console with carbon-fiber accents. The red car, however, will get a black version of that interior.

Despite fears of a sky-high sticker, Toyota has been fairly aggressive with the 2020 Supra’s price tag. Aside from the limited-number Launch Edition, there’ll only be two trims: 3.0 and 3.0 Premium. Both share the same engine, active safety tech, and performance. 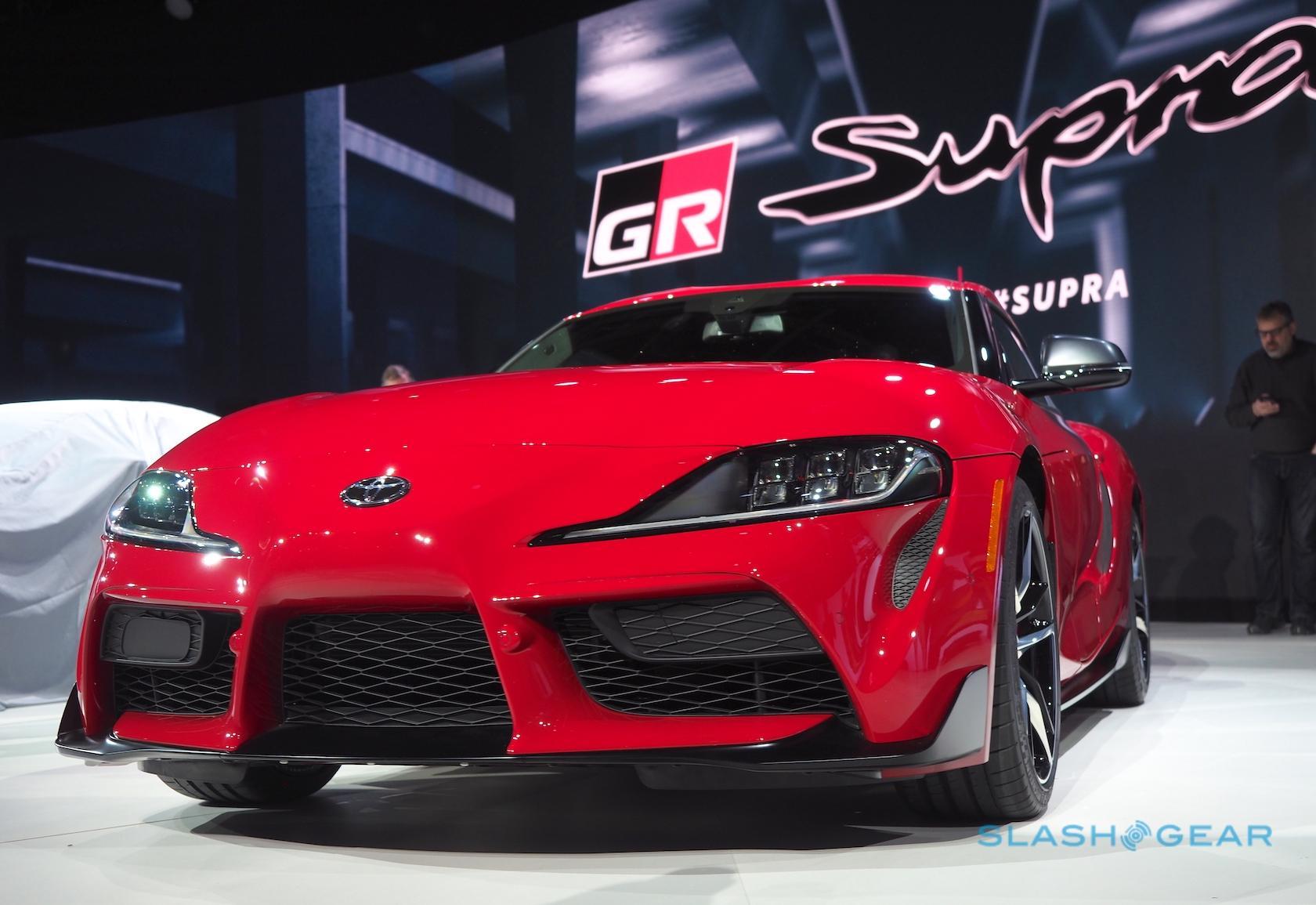 The 2020 Supra 3.0 will be priced from $49,990 plus $930 destination. Options will include the $1,195 Driver Assist Package, which adds full speed adaptive cruise control, blind spot monitoring, rear cross traffic alert, parking sonar, and rear collision warning. Adding navigation and a 12-speaker JBL Audio system will be $2,460.