Silence, for a moment, should it exist, that part of your brain which says “you do not need a 503 horsepower SUV that thinks it’s a coupe,” because otherwise the 2020 Mercedes-AMG GLC 63 S Coupe may be a tough sell. It’s Stuttgart’s answer to a question that I’m not sure many actually asked, though that’s not to say offering more power and pizazz that any shopper in the market for a compact luxury crossover requires doesn’t have its charms.

We are far, far beyond humdrum questions like “is a four-door coupe SUV a niche-within-a-niche too far?” This is 2020, after all, and standing still on firm ground is only ever an invitation to have the rug yanked out from under you. Suffice to say, the GLC 63 S Coupe exists, and so drive it we must. 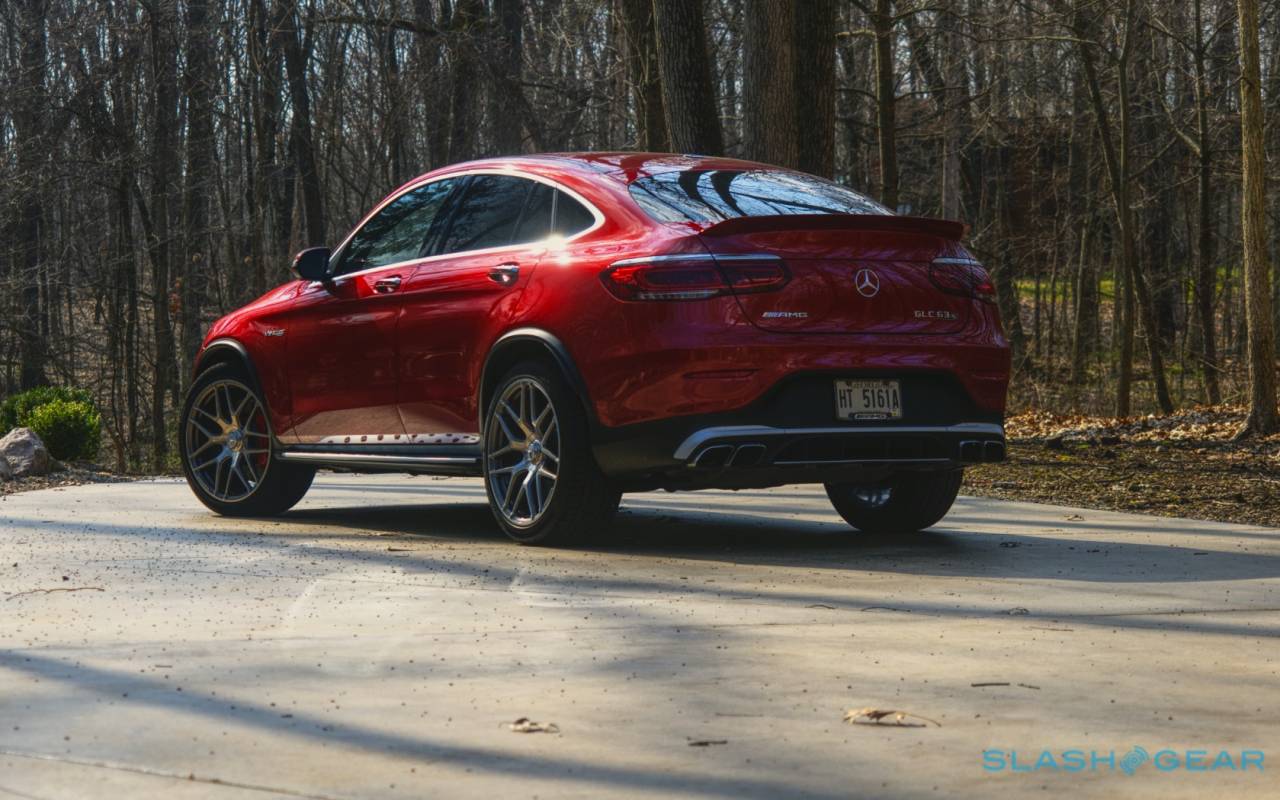 At $84,100 (plus $995 destination) it has the height of a truck, the roofline of a stretched coupe, and a cabin you’d be very disappointed to get muddy. Outside, Mercedes’ “Panamericana” grille is a whale shark maw filled with vertical chrome slats, atop a lower fascia seemingly styled on a 50s movie villain mustache. The 21-inch AMG Forced Cross-Spoke alloys are a $2,250 option, but I suspect the GLC might look a little weedy perched on anything smaller.

Similarly, $1,080 for Cardinal Red Metallic paint seems excessive, until you set eyes on it. Its richness counters the chromed brightwork nicely, and even the black cladding on the wheel arches doesn’t look out of place, though I wasn’t entirely convinced about the duck-tail spoiler at the rear. That doesn’t quite fit with the “go big or go home” ethos we’re running with, unlike the quartet of purposeful tailpipes. 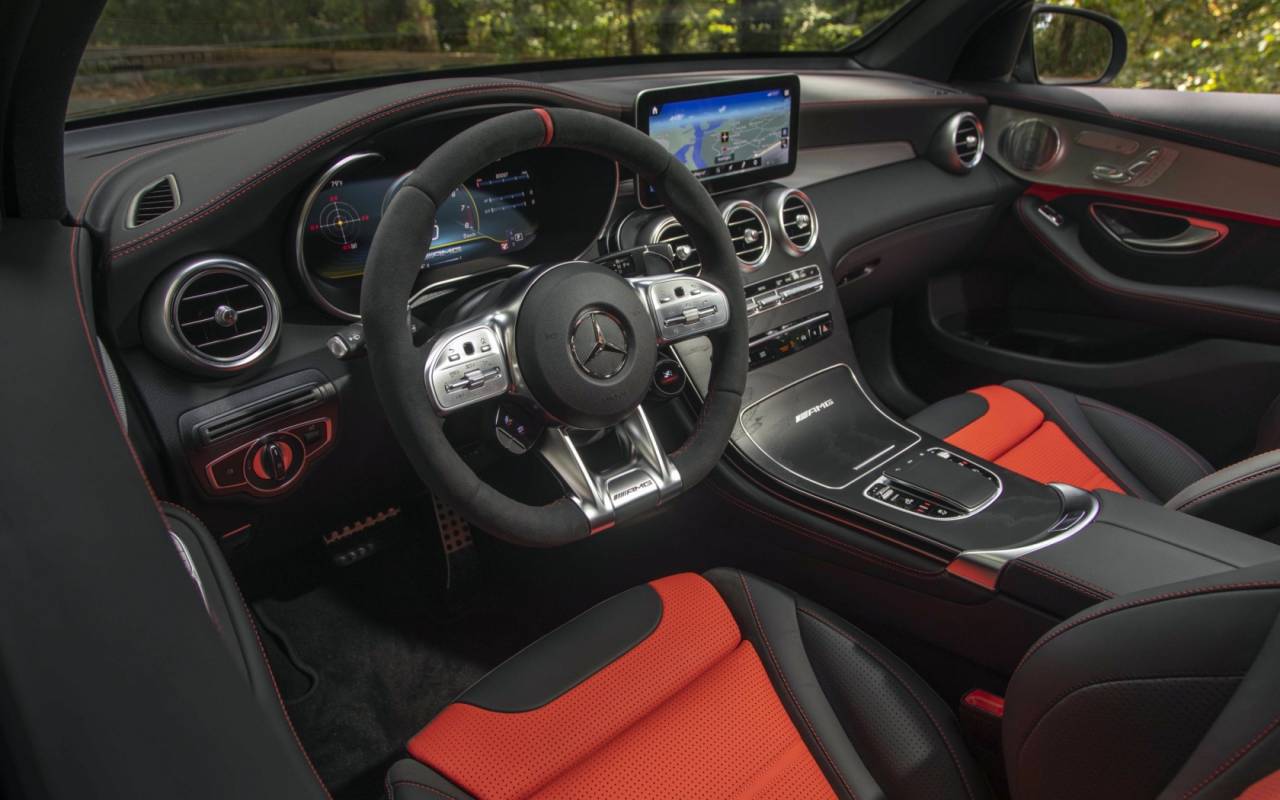 Clamber inside, and it’s a reminder that Mercedes is making some of the best cabins in the industry right now. The new S-Class will upend things with a huge central display later this year, but the 10.25-inch touchscreen in the GLC 63 S Coupe doesn’t feel small, and the 12.3-inch digital driver instrumentation is pleasingly crisp. There aren’t too many physical controls, but neither are you expected to do everything via touchscreen.

AMG’s thick-rimmed steering wheel is a particular joy, a grip-friendly curve of Alcantara mounted on billets of real metal. The tacked-on controls for drive mode and performance shortcuts – with their own integrated mini-displays – are great in theory, but they do feel a little plasticky in comparison. 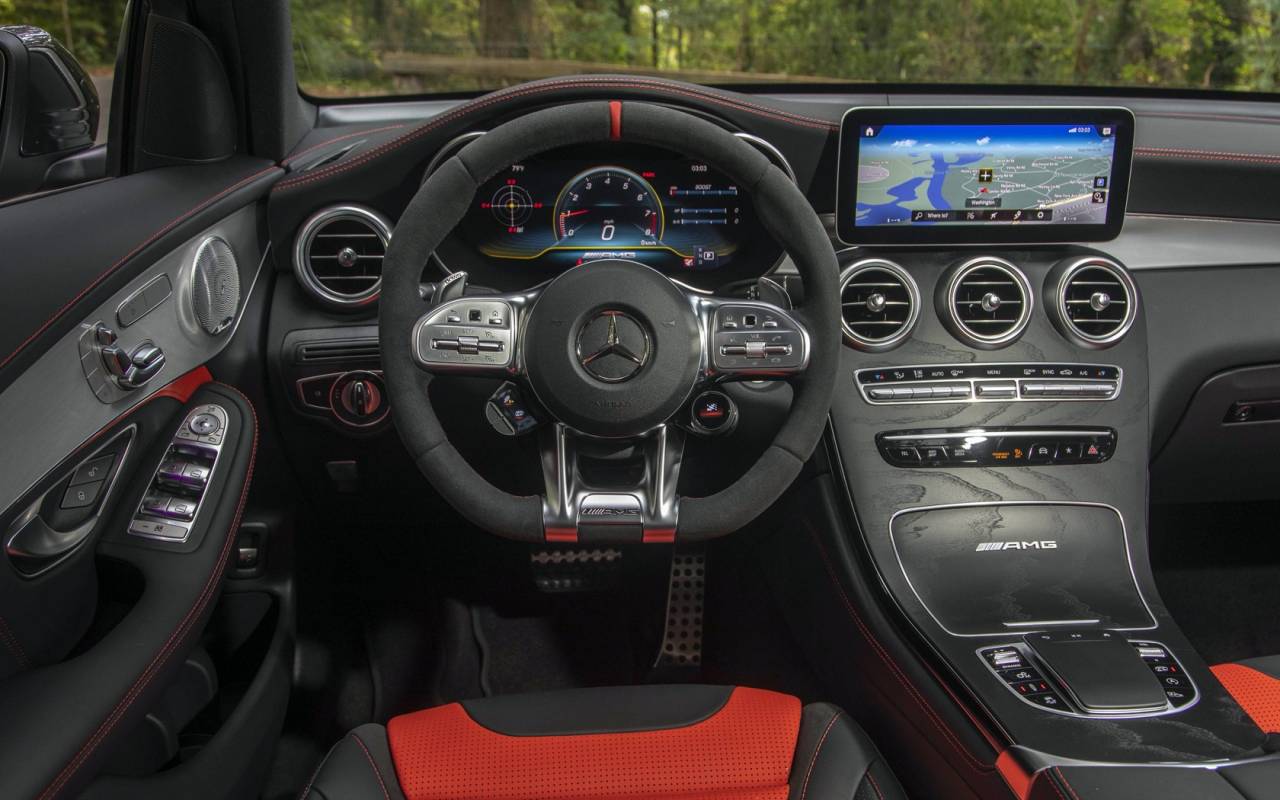 Freshly added for the 2020 model year, MBUX supports Apple CarPlay and Android Auto, along with the “Hey Mercedes” voice trigger. $200 adds a wireless charging pad for your phone, while $1,100 throws in a head-up display. My review car was also blessed with the $1,700 Driver Assistance Package, including everything from advanced adaptive cruise control with lane-keep and lane-change assistance, to route-based speed adaption and active blind spot assistance. The $1,290 Parking Assistance Package feels more essential, given it adds a 360-degree camera that helps alleviate the middling visibility around the rear.

The tapering side windows and letterbox rear glass can be blamed for that, but backseat passengers probably won’t complain. There’s actually an unexpected degree of headroom to be found there, even if the coupe lines do eventually take their toll on overall trunk capacity. That said, 17.7 cubic feet with the rear seats up (or 49.4 cu-ft with them down) isn’t too far off the regular GLC 63 SUV’s 19.4 cu-ft and 56.5 cu-ft respectively. 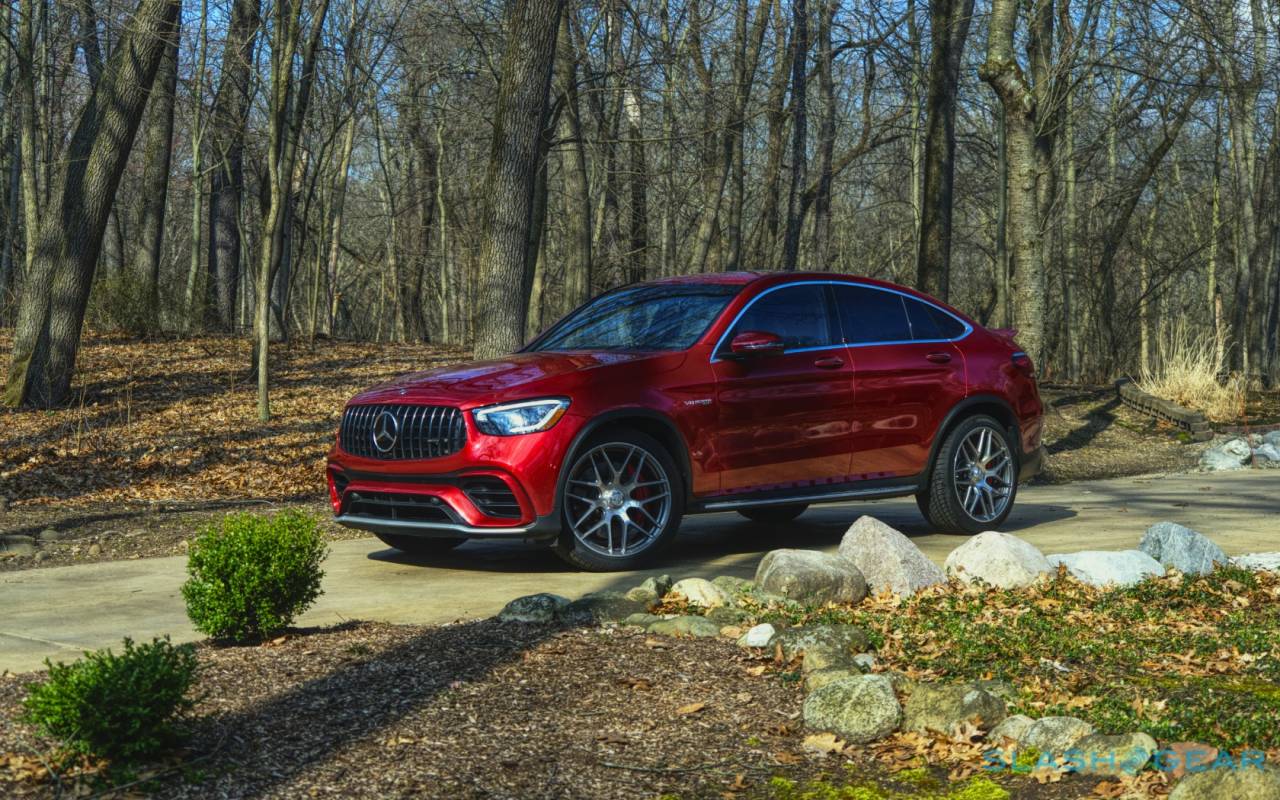 Of course the reason we’re all here is what’s at the other end of the SUV: the power. 503 hp and 516 lb-ft of torque courtesy of a 4.0-liter twin-turbocharged V8. Handcrafted, naturally, at AMG’s facility, and then paired with a fast-shifting 9-speed automatic. 0-60 mph arrives in 3.6 seconds, while the top speed is an electronically-limited 174 mph.

AMG Performance 4MATIC+ all-wheel drive is standard, with air springs and continuously-adjustable dampers. The steering is speed-dependent, while the brakes are dinner-plate sized discs. AMG offers ceramic composite upgrades for the front wheels, but with the grip already on offer it’s hard to imagine needing them. 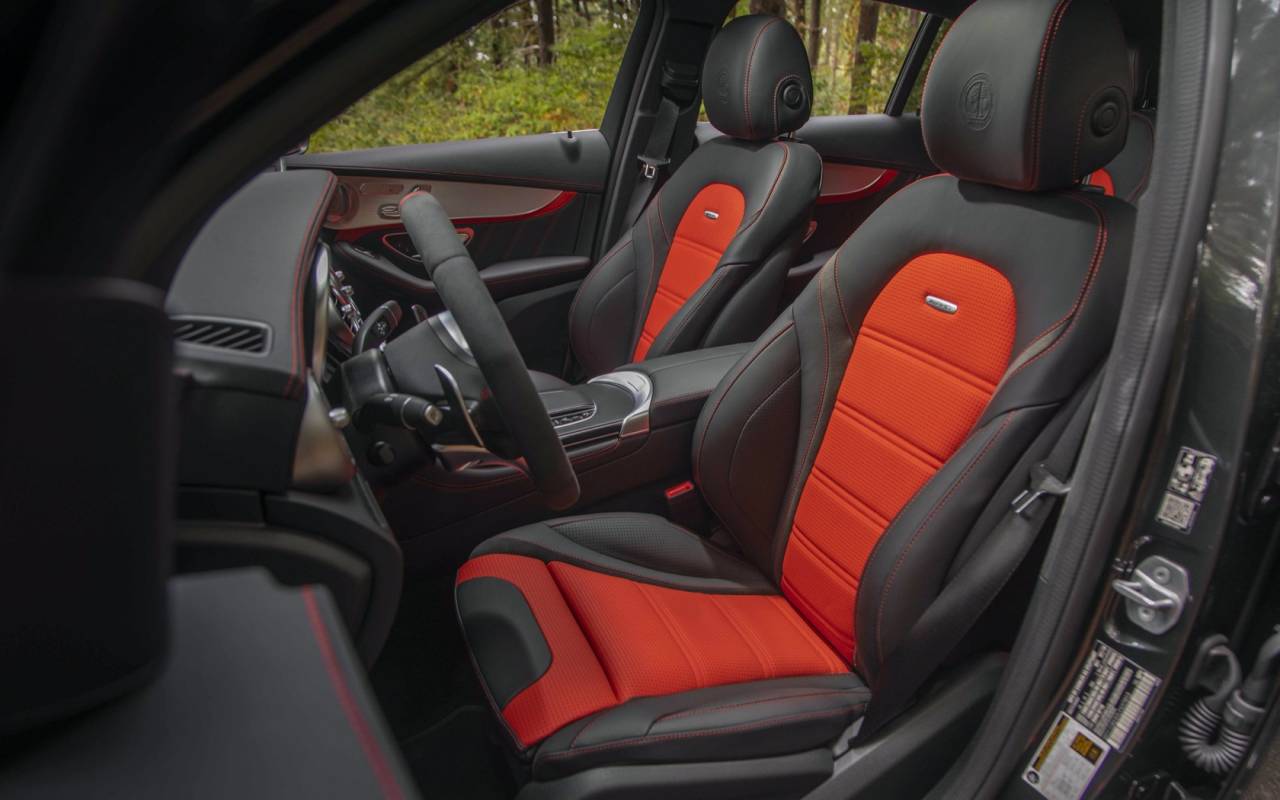 Everything about the GLC 63 S Coupe is excessive. Graze the gas pedal and you surge ahead; Comfort mode may make it a smoother process, but that doesn’t mean you’re spared any pace. Notch up through Sport and Sport+ modes in the DYNAMIC SELECT system, meanwhile, and you’re taught a valuable lesson in the importance of temperance. That is, unless you’ve a long stretch of empty road or a cavalier attitude toward the validity of your driving license.

Race mode is the most explosive, and it can be paired with a new Master agility setting. Bear in mind that’s only affecting the car’s systems: when it comes to the driving talents of whoever is behind the wheel, well, there you’re on your own. At least the GLC 63 S Coupe flatters as best it can, riding level on its firmly-tuned air springs, cornering with a stable urgency that belies its SUV roots, and all the time singing you a siren song of one-part gurgle and another-part howl. 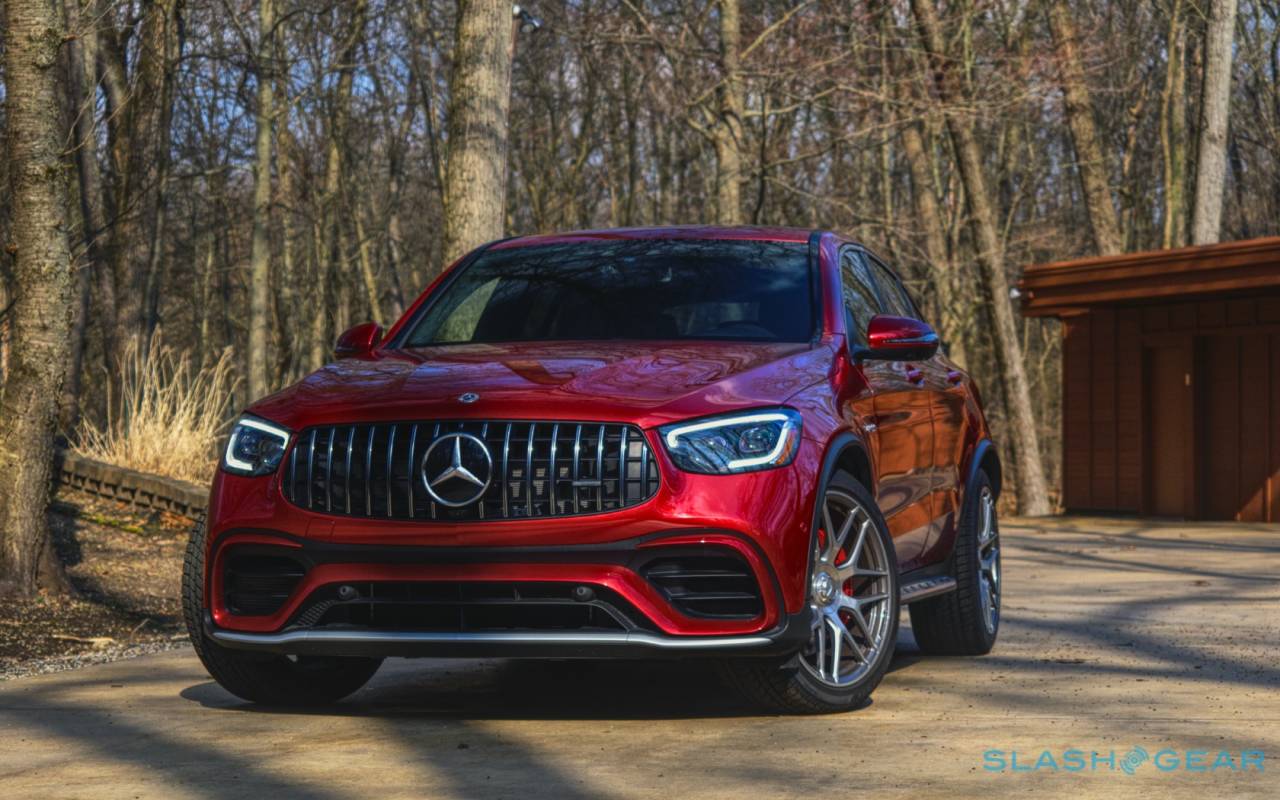 You can drive more sedately, but it takes a little effort. The GLC 63 S Coupe is greedy; its cabin is so thoroughly insulated from the mundane world outside, it’s all too easy to find yourself whipping through it far faster than intended. When you do try to slow things down, the sport-tuned transmission can be jerky. The AMG wants fast and, while it will compromise for you, it’ll also make you know it’s not enjoying the experience. 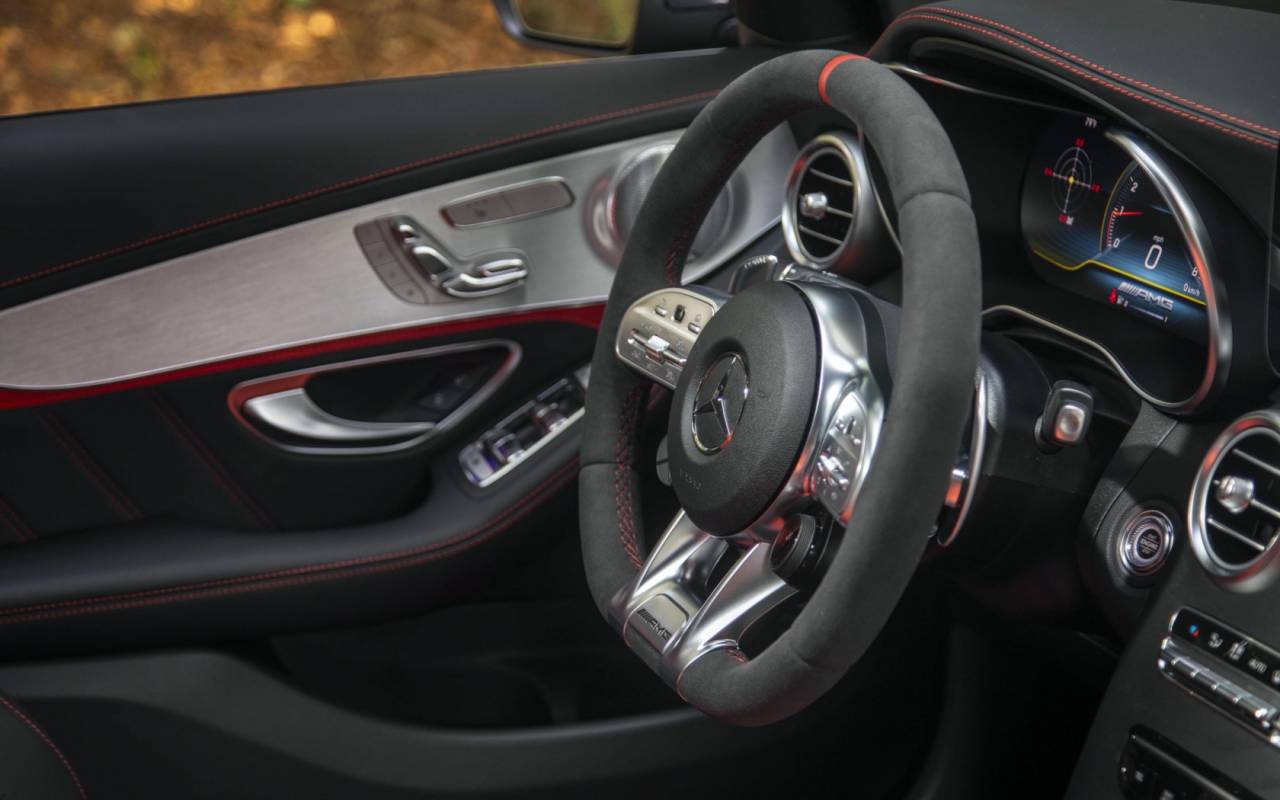 There things feel a little different to another posh fast truck, the recently-launched 2021 Porsche Cayenne GTS. With its 453 hp and 457 lb-ft of torque it’s not Porsche’s most potent Cayenne, and it’s larger than the GLC, but it does promise the most sporting poise. Where the GTS is willing to temper its excesses in the name of everyday usability, however, the AMG just hates to be cowed.

The Porsche, at least, does leave the GLC 63 S Coupe looking like great value. Even with options, this review car still came in at $96,435. That’s $14k less than the starting price of the Cayenne GTS.

Suspend that disbelief for a little longer. Pretend, for a moment more, that this most excessive of excessive SUVs is subject to the same, sensible decision-making process its tamer counterparts incur. It’s strikingly stylish, unexpectedly competitive in its pricing, certainly isn’t lacking in performance, and has a cabin that could put many would-be “luxury” cars to shame. 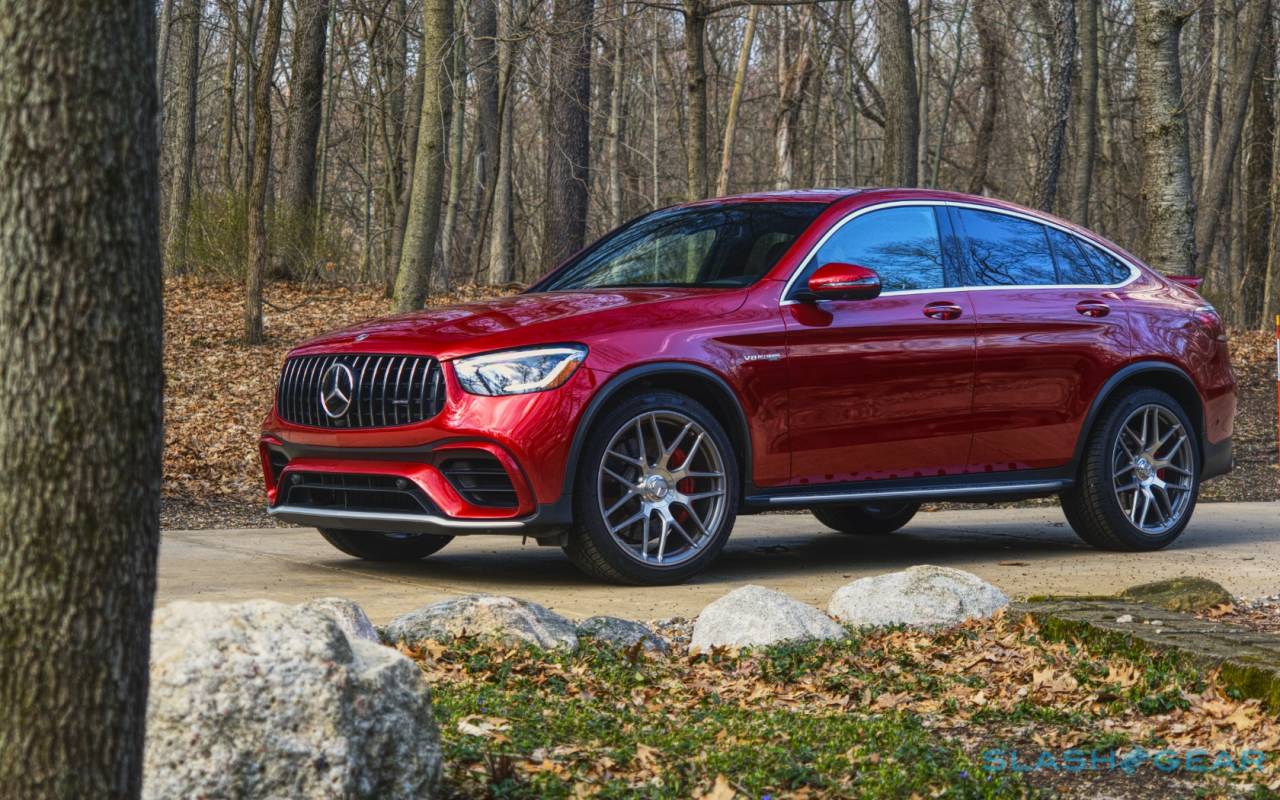 The reality, of course, is that cars like the AMG GLC 63 S Coupe are bought with the heart, not the head. Mercedes fans will want the GLC, BMW lovers will look to the X4 M Competition, and Porsche enthusiasts will juggle the Macan Turbo or Cayenne GTS. Put bluntly, any of the above will deliver on the “achingly fast truck” scale, and none of the above will come close to showing their full capabilities on public roads.

Take your pick of the ridiculous, beguiling SUVs, then, and take it to the nearest public track. Give the Miata and S2000 owners something to talk about. If 2020 has shown us anything, it’s that expectations are apparently made to be upturned. Nothing wrong with having some fun along with it.