2020 Mercedes-AMG G63 Review – Because too much is just right

In 2020 we take our reassurance where we can find it, even if that’s in the sound and feel of an SUV door when it closes. The 2020 Mercedes-AMG G63 is known for plenty of things – not least its wanton profligacy, Brutalist proportions, and conspicuous dedication to excess – but even with 577 horsepower to play with it’s those doors I keep coming back to.

Mercedes is a pretty obsessive company – though that isn’t terribly unusual among German automakers – and it sweats the small stuff. When it redesigned the iconic G Wagen back in 2018, what was carried over was arguably just as important as what was new. Of the four visible parts the old G Class handed down its successor, the door handle design was one of them. 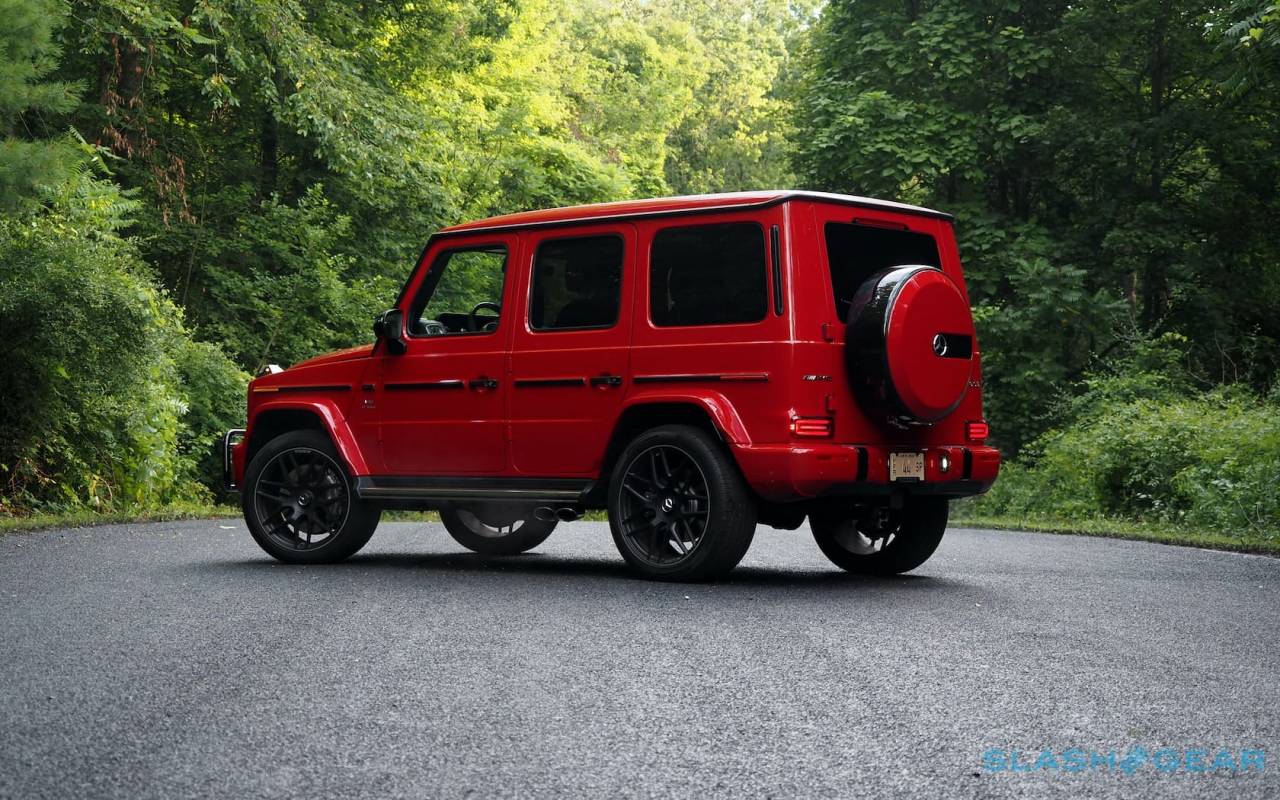 It’s big, and a little clunky, and that describes the door mechanism too. That’s hefty, and requires a fair slam to properly close, and quite honestly when you’ve lived with the automatic-closing doors on other recent six-figure Mercedes you might wonder why you’re going to all this effort. Especially since the rest of the truck is so lavish. 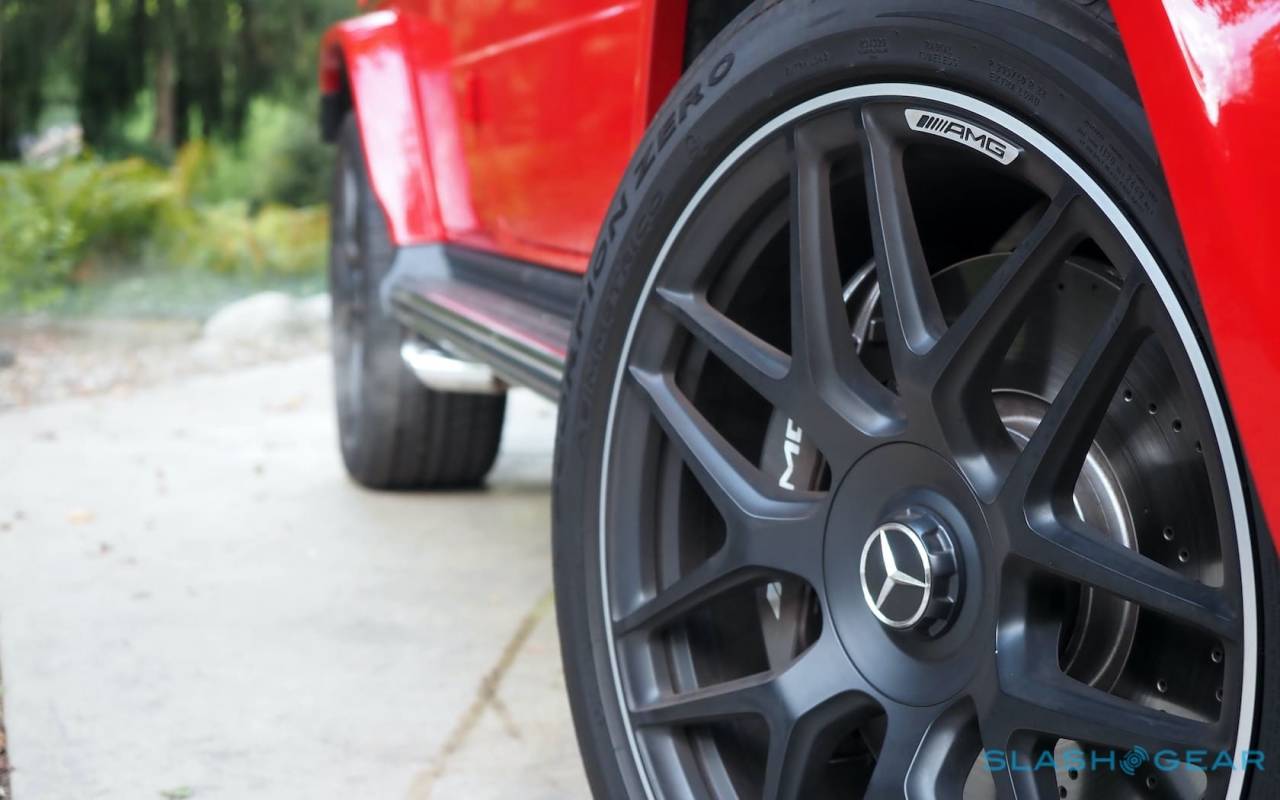 In AMG form, the tuning division takes the “normal G550” and cranks the ridiculous up. In goes a handcrafted 4.0-liter V8 birturbo engine – with 577 hp and 627 lb-ft of torque – and an AMG Speedshift TCT 9-speed transmission. There’s AMG Ride Control Sport Suspension, all-wheel drive, and both a high-performance brake system and a performance exhaust.

The G63 keeps the clever lockable differentials, though, and the low range gearbox. You could, in theory, take it all the off-road places the G550 can go, though swapping out the 22-inch Forged AMG cross-spoke wheels might be an idea first. Mainly because their skinny rubber probably isn’t the best idea in the rough stuff, but also because they’re $4,450 for a set and so damaging them would be painful. 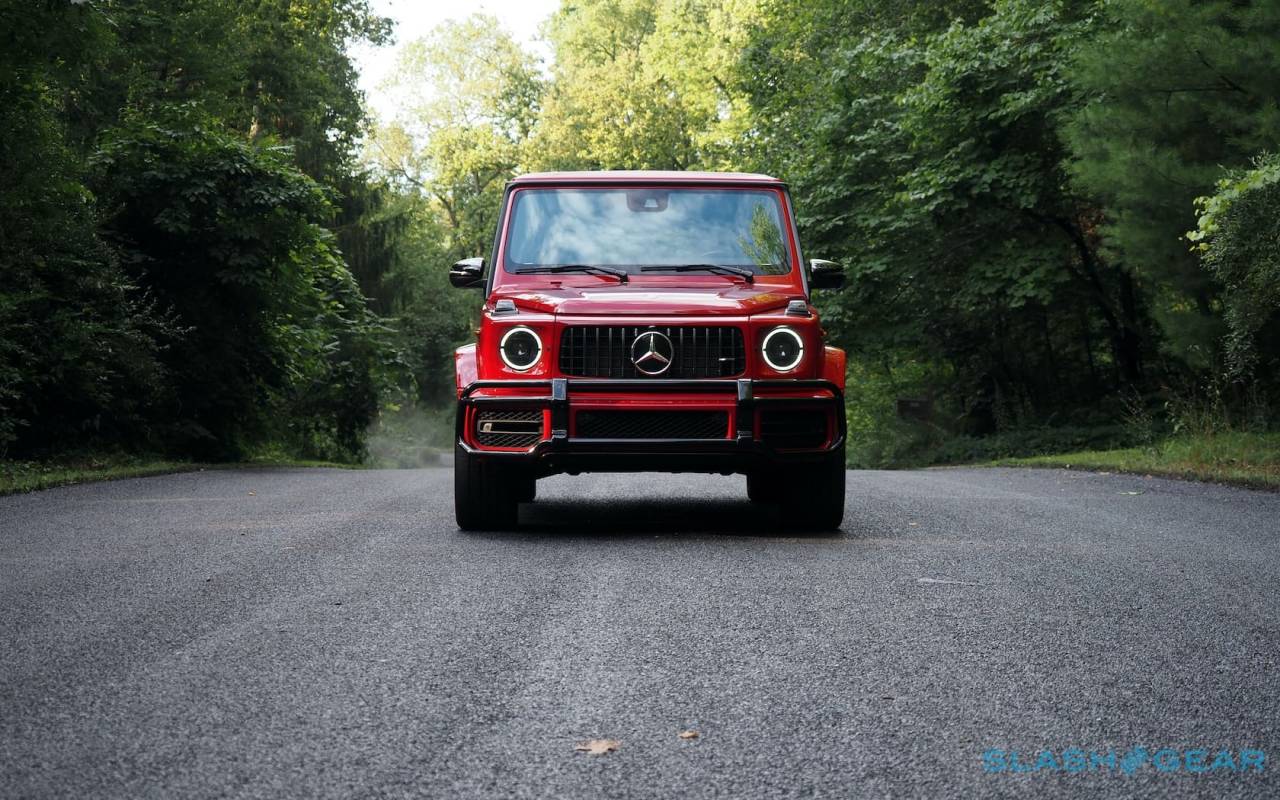 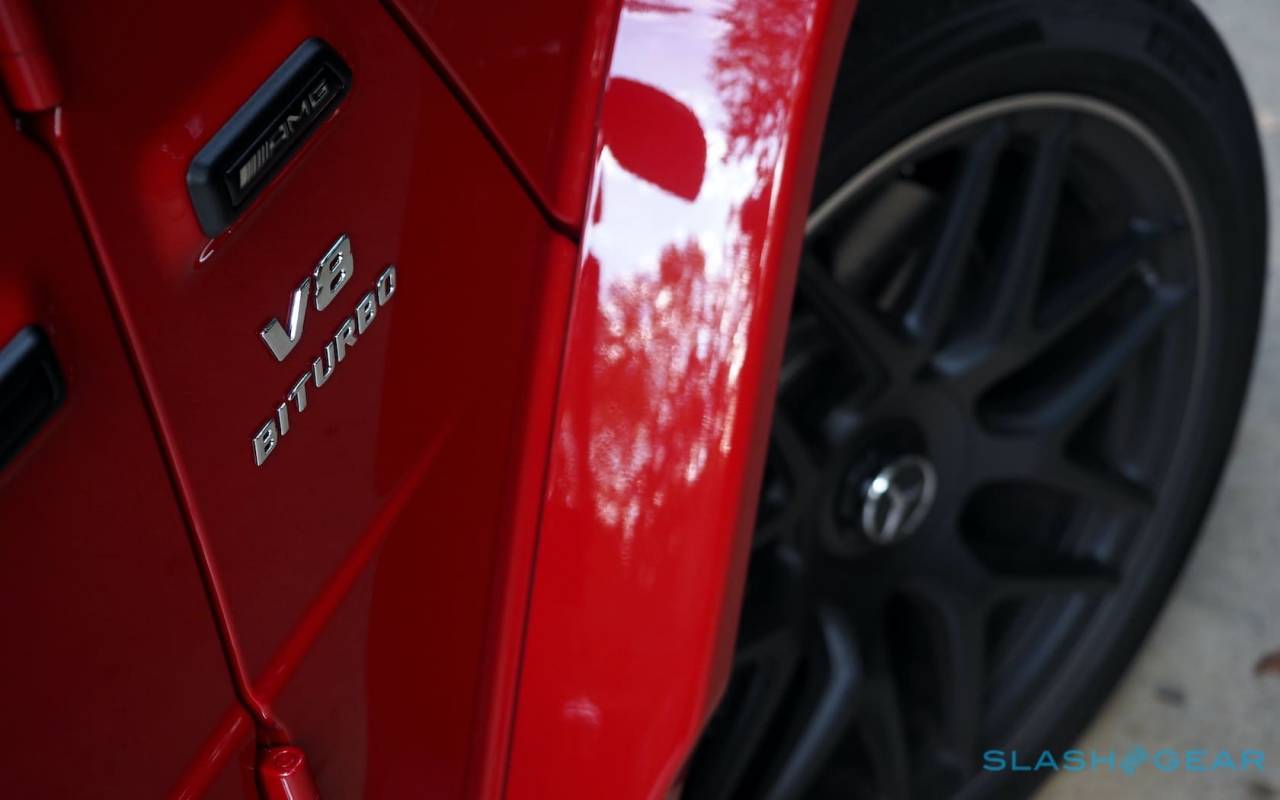 It looks, and feels, like a huge Tonka truck. People stare at you – because you’re in a bright red SUV with massive blacked-out wheels and side exhausts – and they certainly hear you coming, when the AMG V8 starts rumbling then yowling. Top speed, even delimited, may only be 149 mph, but 0-60 mph comes in 4.5 seconds and it feels… otherworldly. 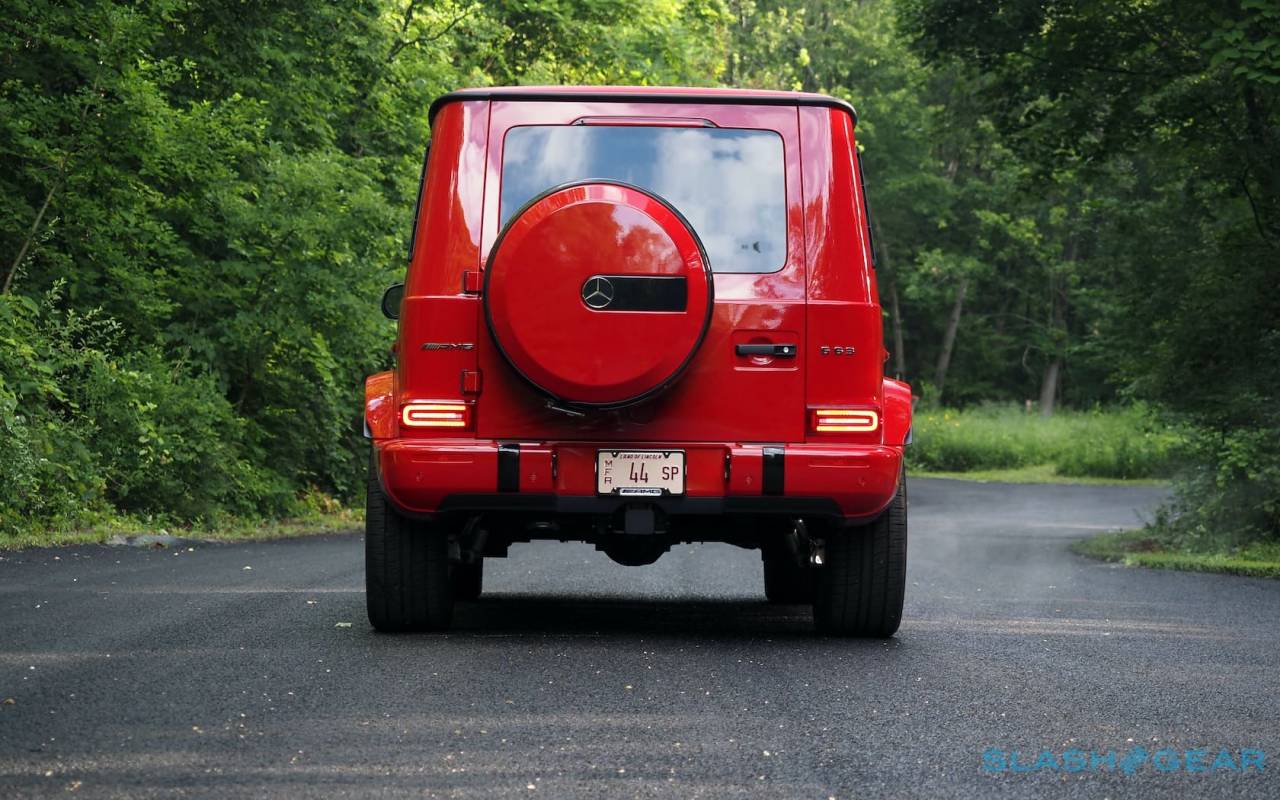 I’ve been in fast cars. Fast SUVs, too. There’s something, however, uniquely silly about staring down that squared-off hood, at the G63’s chunky little corner marker lights, and being surrounded by sheet metal that still feels like it was designed with a set-square not an aero tunnel, as twin-turbos hurtle you away from the lights. Silly, and addictive. 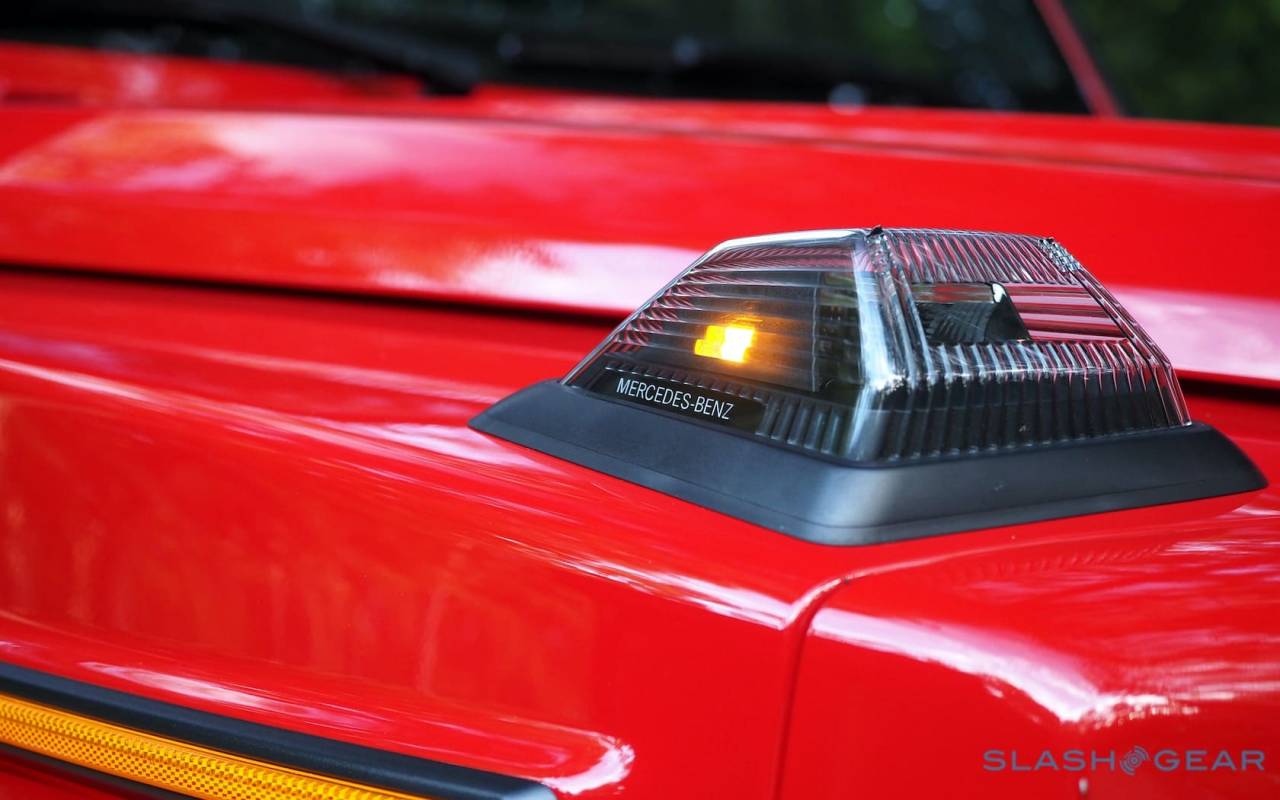 It is difficult to make a convincing argument that anybody needs an AMG G63. The regular G550, on standard wheels, can make the most of the complex and flexible locking diff system; in AMG’s version, those milled-bullet buttons on the dashboard could easily go the lifetime of the SUV unpressed. An AMG GLE 63 S is more powerful, and cheaper, and faster, and still seats five. It corners better, too, courtesy of its trick air suspension.

In the end, I think I find the G Wagen’s doors so reassuring because they’re decidedly low-tech. Predictable. Understandable. You yank them open with a strong tug on the oversized handle, and you slam them shut again afterwards. If that doesn’t close them properly, well hell, then you slam them harder still. 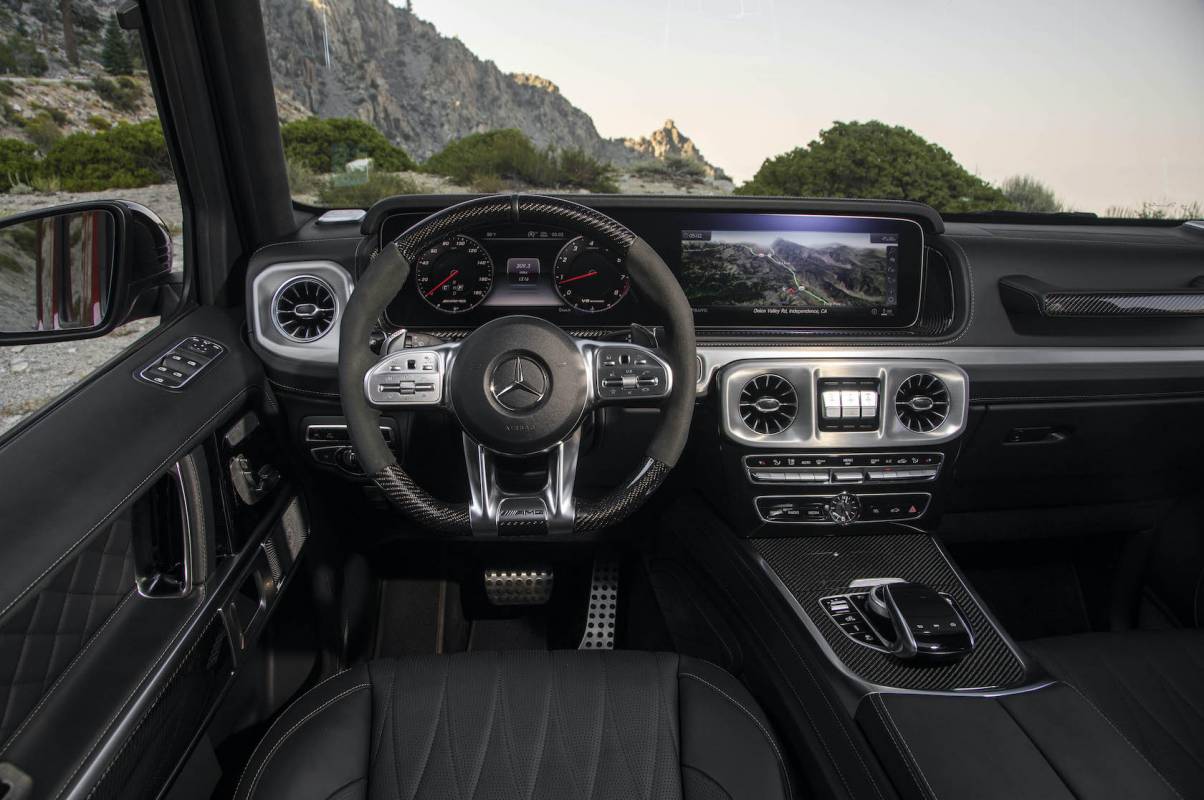 The rest of the SUV isn’t quite so blunt. Cabin upgrades brought fancier tech onboard, with twin 12.3-inch displays, tri-zone climate control and heated seats, Android Auto and Apple CarPlay, and even multicolor ambient lighting. There’s adaptive cruise control and lane-keeping assistance, and a sweet-sounding Burmester audio system to distract you from the 14 mpg combined fuel economy that few if any G63 owners will really care about. 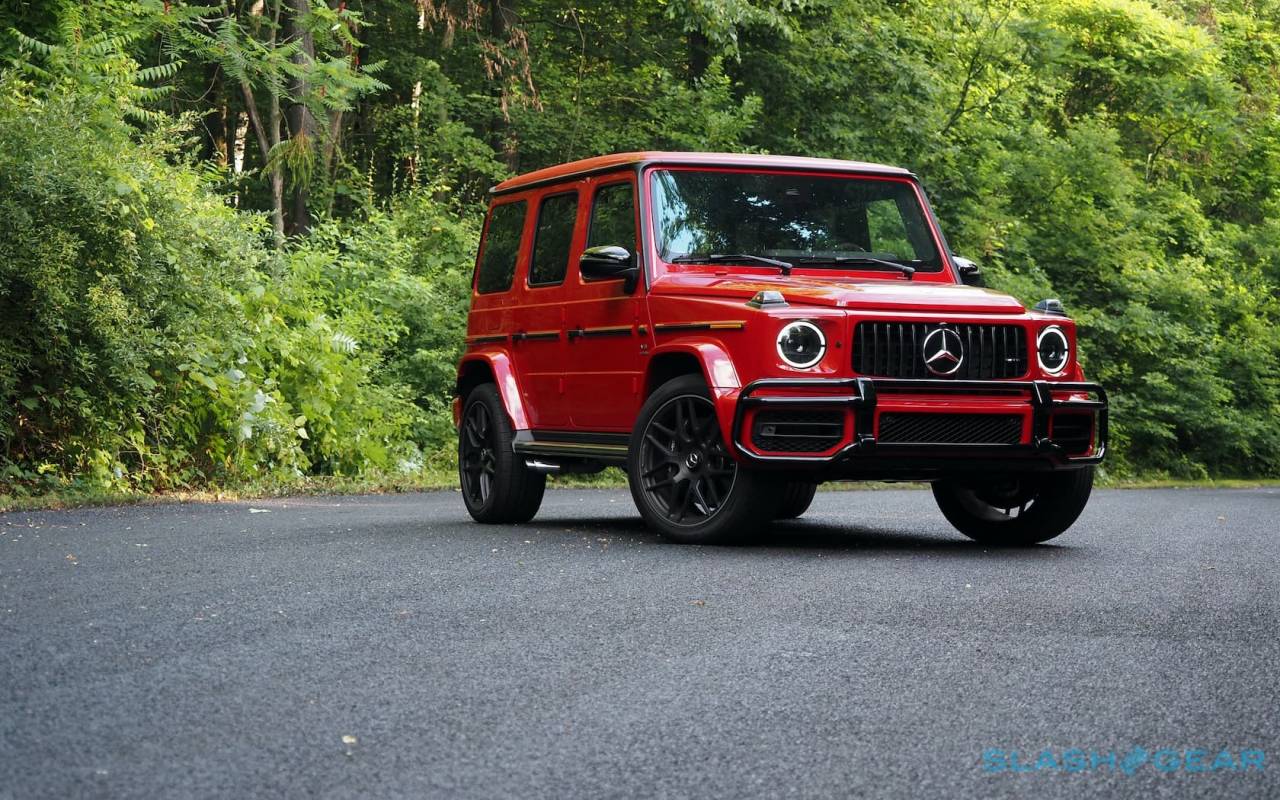 Usually we’re encouraged to forgive the rough edges, but in the AMG’s case it’s the cosseting, the softness I can force myself to look beyond. It feels like a year where we need anchors, tangible things we can count upon and believe in, and it may sound silly but the G63’s ridiculously over-engineered door handles are just that. AMG excess may give this six-figure monster its ability to turn heads, but the solid foundations that’s all built upon is why the G Wagen remains unique – and uniquely appealing – in a sea of SUVs.