The sports car had a good run, but its days are numbered. Time and trends are callous in their disregard for nostalgia: drivers are voting with their wallets, and they’re voting for super SUVs like the new 2021 Mercedes-AMG GLE 63 S and GLS 63. With 603 horsepower to play with, can you really blame them?

AMG is of course no stranger to SUVs. Roughly 50-percent of its US sales are in the category, something engineers and product planners alike haven’t been slow to capitalize on. 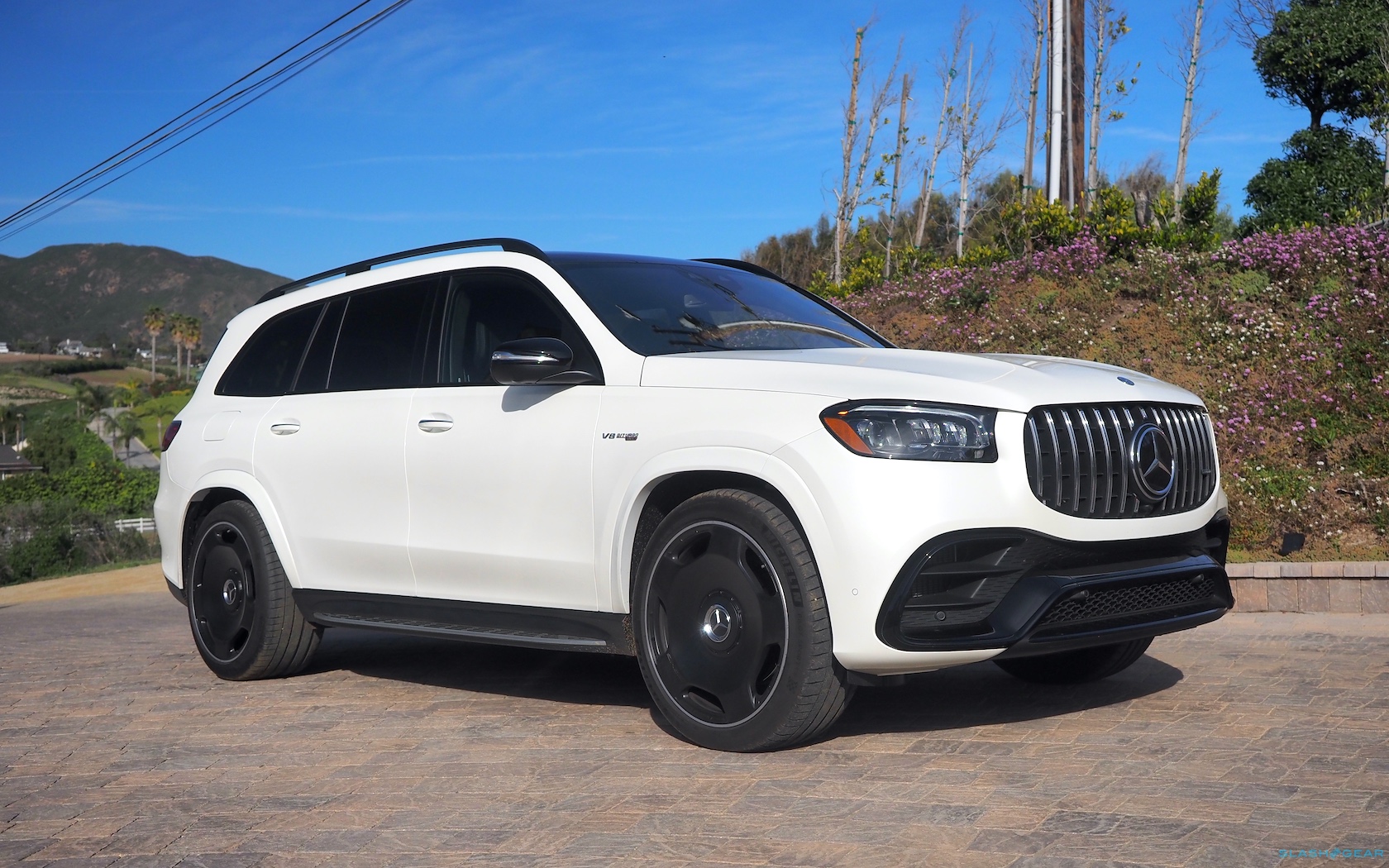 The result is a pair of family trucks with physics-defying manners on the road, or as close as Stuttgart can get it. Let me be blunt: vehicles the size, shape, and weight of the GLE and GLS really aren’t obvious candidates for AMG’s breed of hurtling performance. To deliver that, you need a very special drivetrain.

Specifically, it’s a 4.0-liter V8 biturbo which uses Mercedes’ EQ Boost system. Assembled according to AMG’s “one man, one engine” principle, it delivers 603 hp and 627 lb-ft of torque. In the case of the three-row GLS 63 that means 0-60 mph in 4.1 seconds. The slightly lighter GLE 63 S trims that down to a faintly-ridiculous 3.7 seconds. 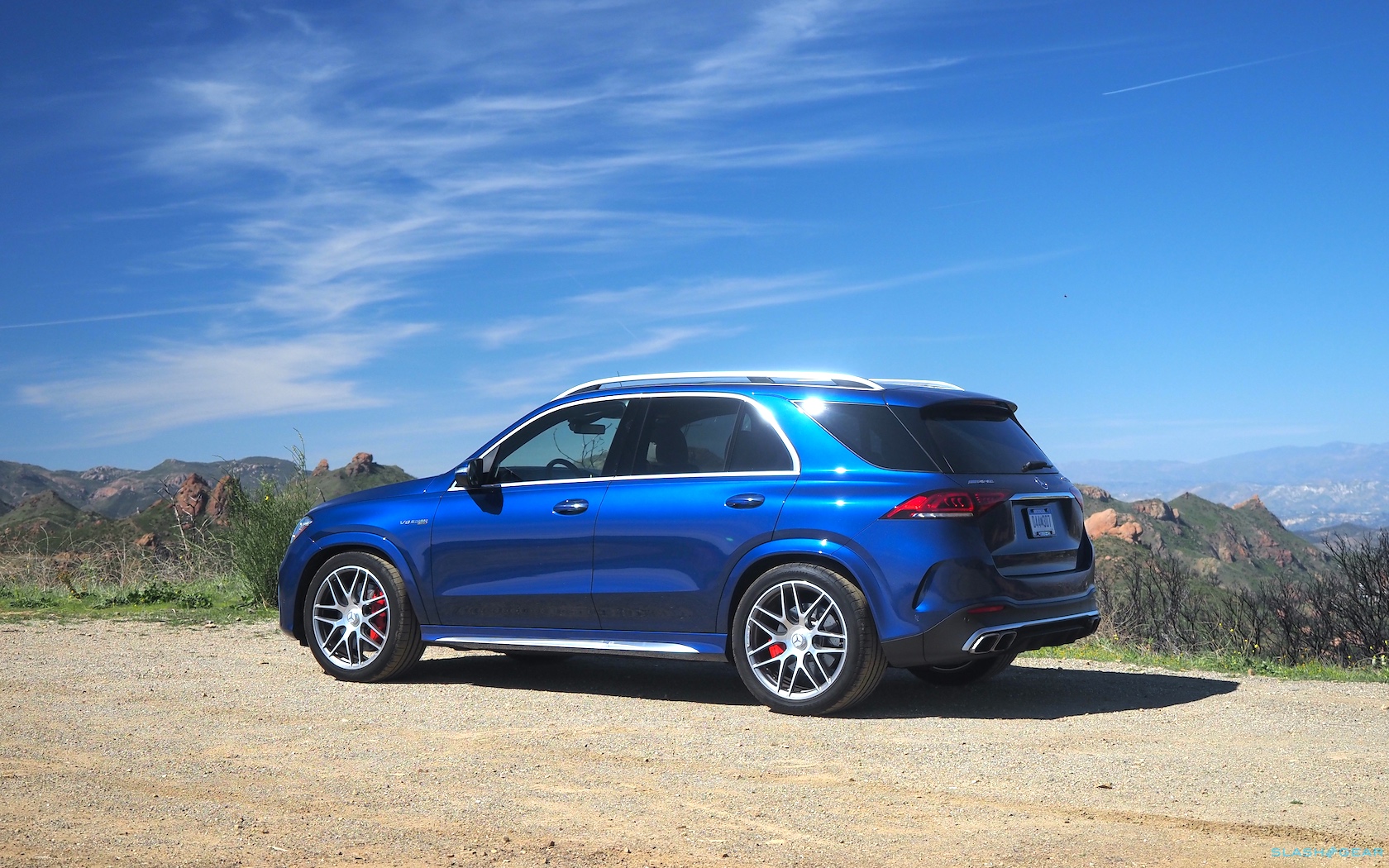 Let’s not risk derailing the fun by asking whether anybody really needs a luxury family SUV that can stomp on muscle cars in the quarter-mile. Nobody asks why a sports coupe deserves to exist, after all. Instead, focus on the clever EQ Boost system with its addition of up to 21 hp and 184 lb-ft of torque from a perpetually topped-up 48V battery and electric starter-generator.

Out on the road my biggest concern was how the twin truck terrors would get that power to the asphalt without, y’know, spinning or causing the Earth to contra-rotate underneath them. Apparently I worry too much. AMG 4MATIC+ all-wheel drive is standard, as is ride-control air suspension and active roll management. Even the V8 is attached via electronically-controlled mounts which can adjust their stiffness according to the current drive mode. 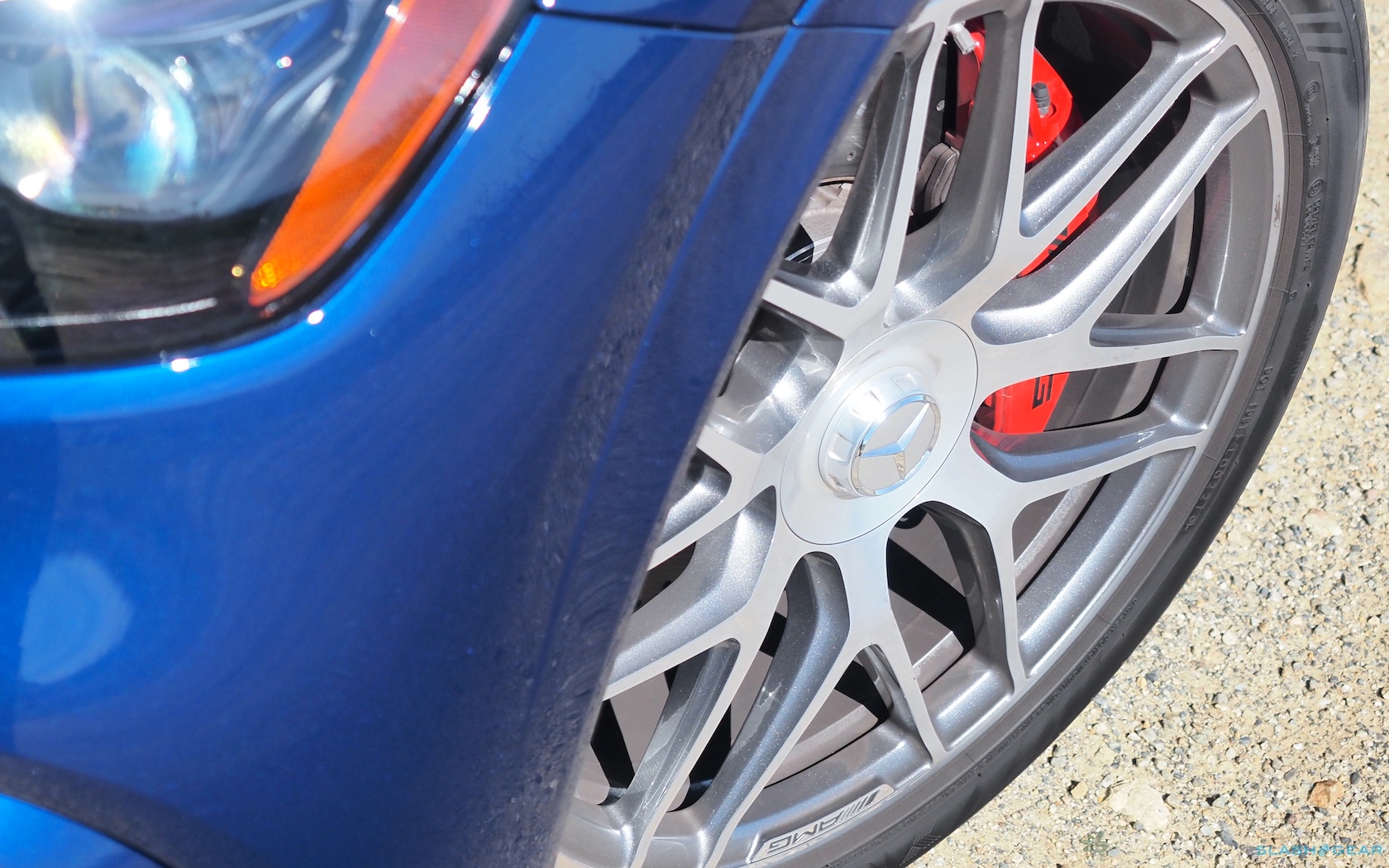 The result is an SUV that can be as soft, supple, and generally luxurious as an ermine-wrapped mattress, or as stiff as your lower back after clambering out of one of those old, passé, “traditional” sports cars. No risk of that in the GLE 63 S or GLS 63, which have plush sports thrones that ensure that all-important lofty view as you hurtle past lesser traffic.

Seriously, it’s uncanny. In Comfort mode, both SUVs waft generously. The air suspension leaves them compliant over all but the roughest roads, and while there’s some roll if you take a corner hotter than your rear seat passengers would probably prefer, it never graduates into that seasickness-triggering undulation big trucks can suffer from. 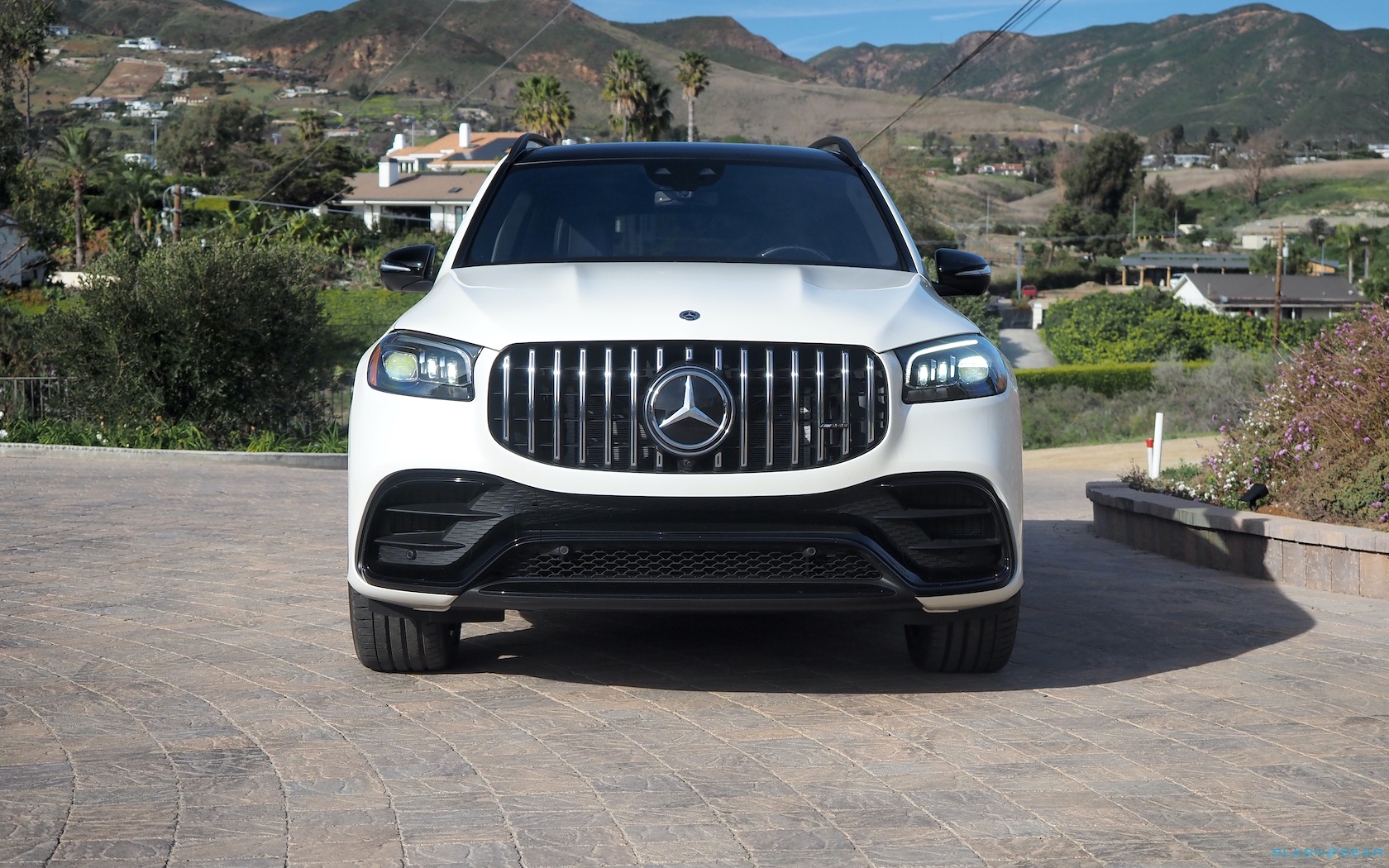 Snick the drive mode dial on the steering wheel around to Sport or Sport+, however, and it’s a very different vehicle. The permanent AWD system defaults to a 50/50 split but can push up to 100-percent of the V8’s power to the rear if the situation – and your driving style – demands it. Meanwhile there’s an electronic rear differential for better distributing power between the back wheels, along with the suspension dramatically tightening.

You notice it in the corners, sure, but it’s even more effective when braking hard. There is a natural apprehension about hitting the slow pedal with urgency in an SUV this size, shared by maybe everyone bar professional drivers and luge racers. Something about the nose diving, the rear end scrabbling, and the sudden gasp from everyone onboard. 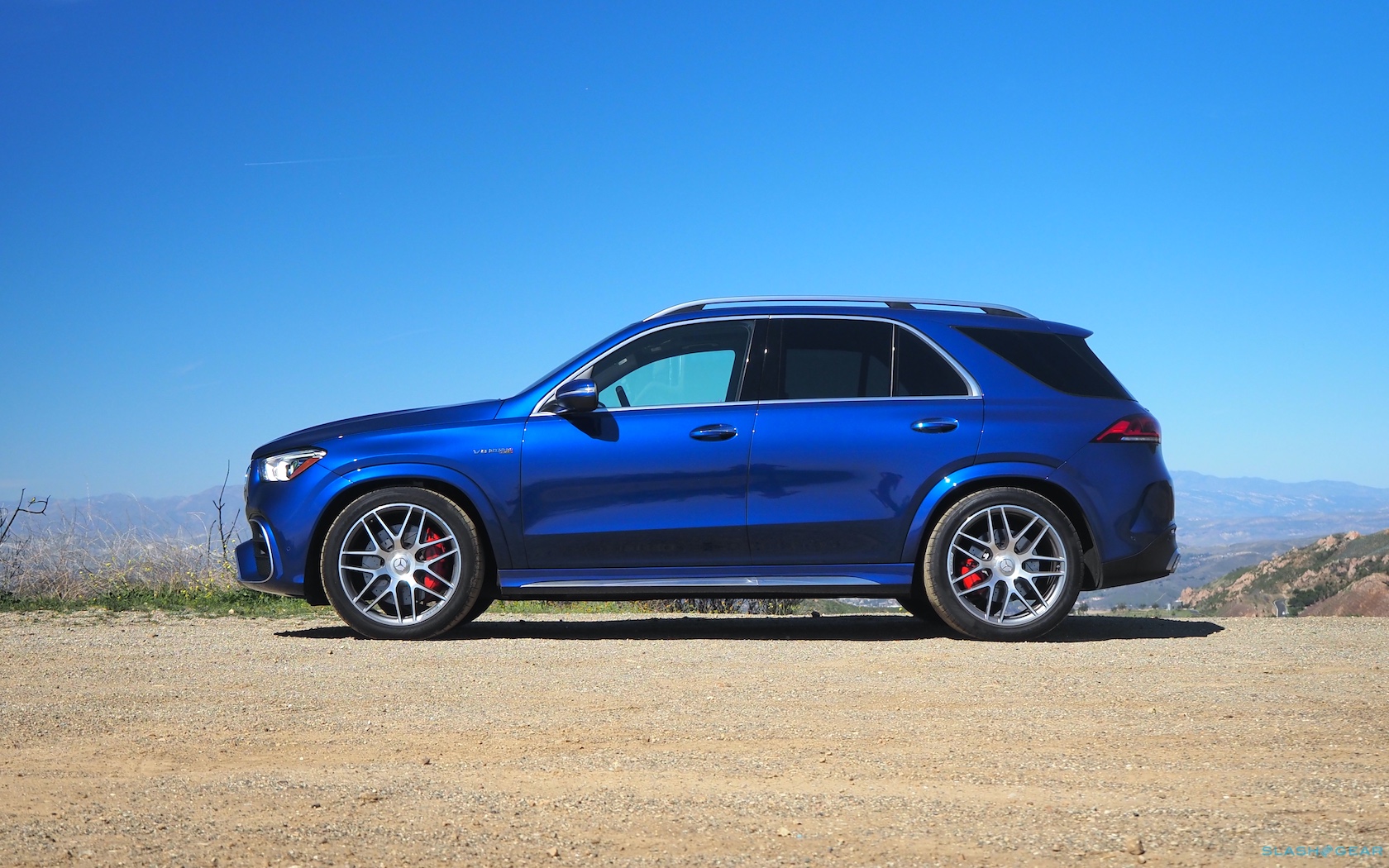 Except that doesn’t happen in this AMG duo. Make no mistake, stomp on the brake and both stop in short order: discs the size of dinner plates behind the vast wheels have you covered there. It’s just that, with its trick suspension and dampers and roll stabilization, everything happens with a sense of control.

It’s basically engineering witchcraft, and it may very well charm all but the most resolutely skeptical of performance SUVs. I won’t deny that a traditional sports coupe or convertible will out-twist either the GLE 63 S or the GLS 63 on a serpentine mountain road. Mercedes-AMG had provided us with just such a route, and while each car was urgent and capable, there is only so far you can push physics before it snaps at you. Honestly, my bravery on relatively narrow lanes and a long drop down probably ran out long before the AMG’s talents did. 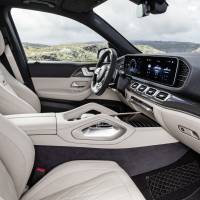 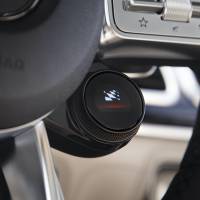 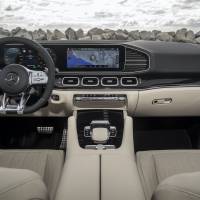 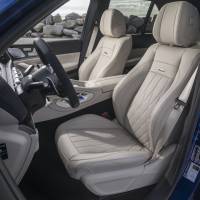 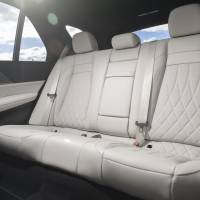 That coupe or convertible, though, probably has room for four in a pinch, and with those relegated to the back seats likely to complain about it. Nobody is bemoaning Mercedes’ interiors here, in contrast. All of the niceties from the regular top-trim GLE and GLS are present, combined with some go-faster fancies from AMG’s catalog. MBUX, the automaker’s excellent new infotainment system, looks superb on the dashboard-spanning dual displays. Controls feel crisp and solid; everything that can be is motorized, making the most arduous part of navigating through the numerous seat positions and cargo space options the initial hurdle of which-button-does-what. 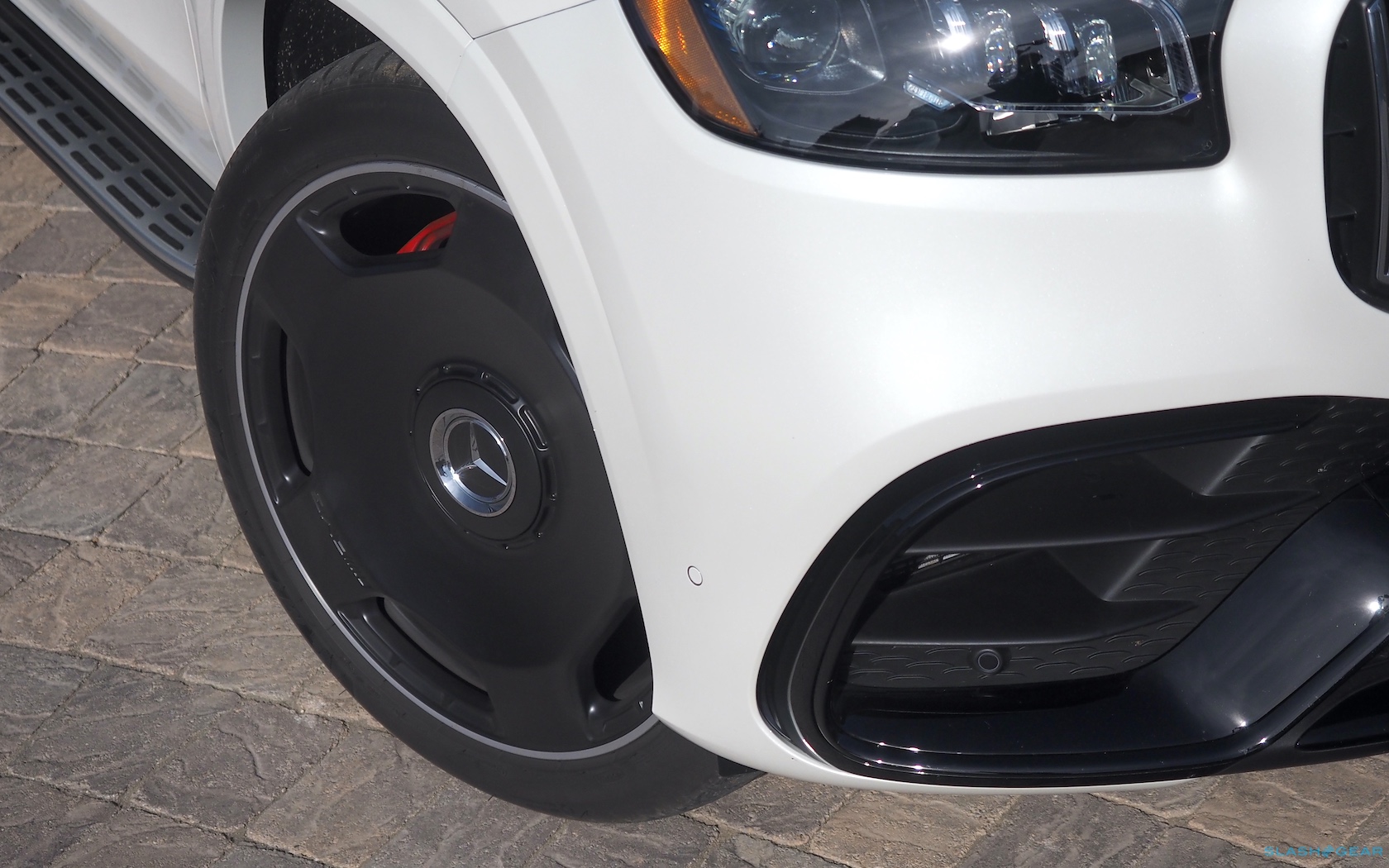 Everything you’d expect, in fact, from a pair of six-figure SUVs. The 2021 AMG GLS 63 starts at $132,100 (plus $995 destination) for when three rows are a must. The 2021 AMG GLE 63 S is even more affordable, at $113,950, though you should budget a little extra for the huge, glorious 23-inch monoblock wheels. They’re available in black or silver, but I bet your nearest Mercedes dealer wouldn’t argue if you demanded to pay extra and have them finished in body-color instead. 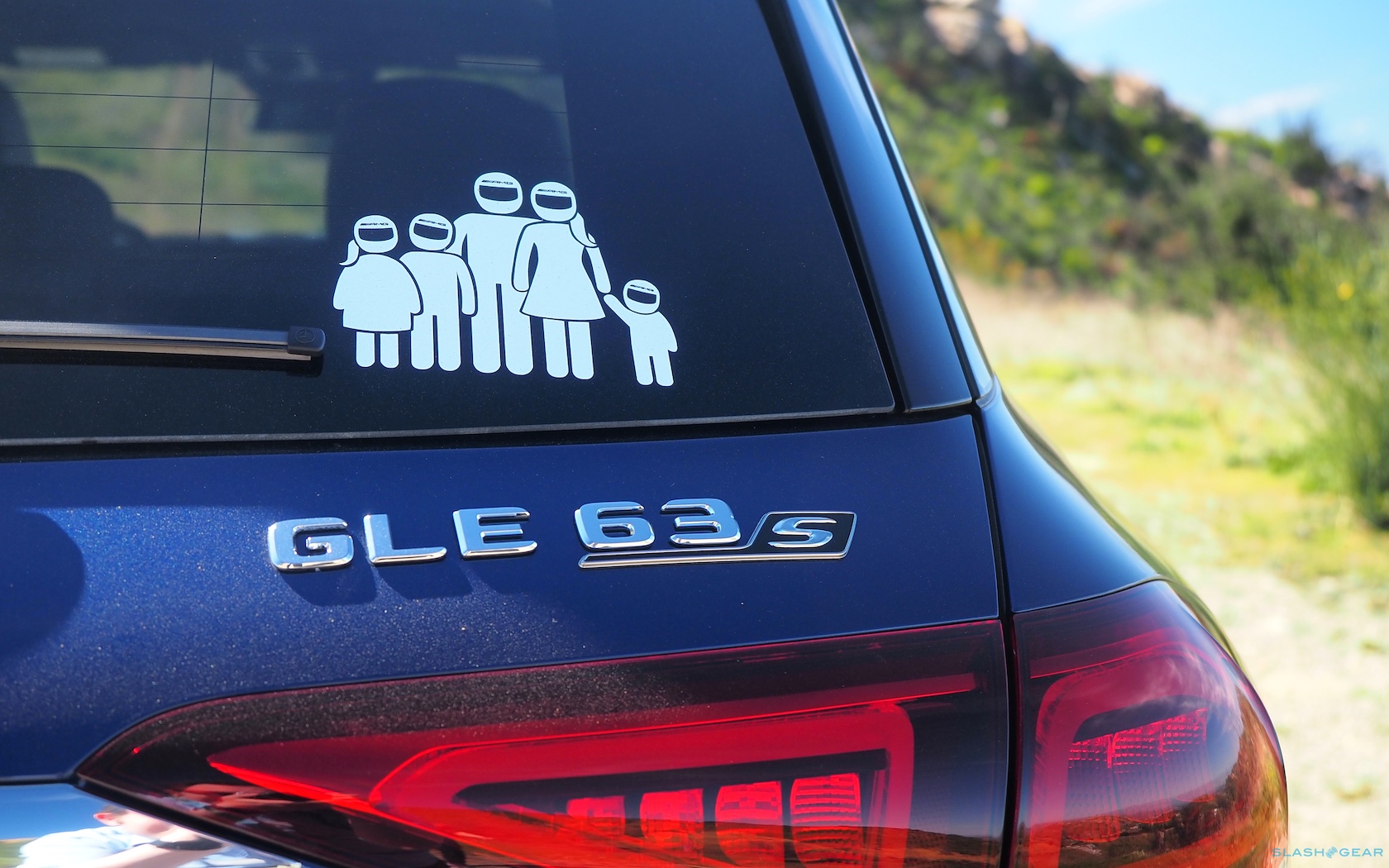 You should do that. Embrace the opportunity to drive something that not only has more horsepower than, what, 90-o r 95-percent of other vehicles on the road, but that allows you to bring your family along for the ride. Choose to have your German cake and eat it too.

For years, the sports car has had all the fun. All the horses and all the envious stares; all the roar and fury. Well, it’s time for a change, and it’s a big one. Welcome to the age of the new performance car: blending in just isn’t an option.