Growing up is tough: usually, age brings with it responsibility and, when you’re a punchy little enthusiast plaything like the 2020 Mazda MX-5 Miata, “sensible” is the bogeyman. While that purity of purpose keeps long-time Miata fans happy, though, the pool of potential owners willing to make compromises in everyday driving isn’t getting any bigger. We know Mazda’s little icon is fun, but can it be flexible?

Pricing for the 2020 Miata kicks off at the eminently reasonable $26,580 (plus $945 destination), which remains one of the bonafide bargains of the modern car world. That gets you the base Sport trim, which certainly can’t be described as lavish. Importantly, though, you get the same 2.0-liter inline-4 engine with 181 horsepower and 151 lb-ft of torque as you would in any of the more expensive MX-5 versions. 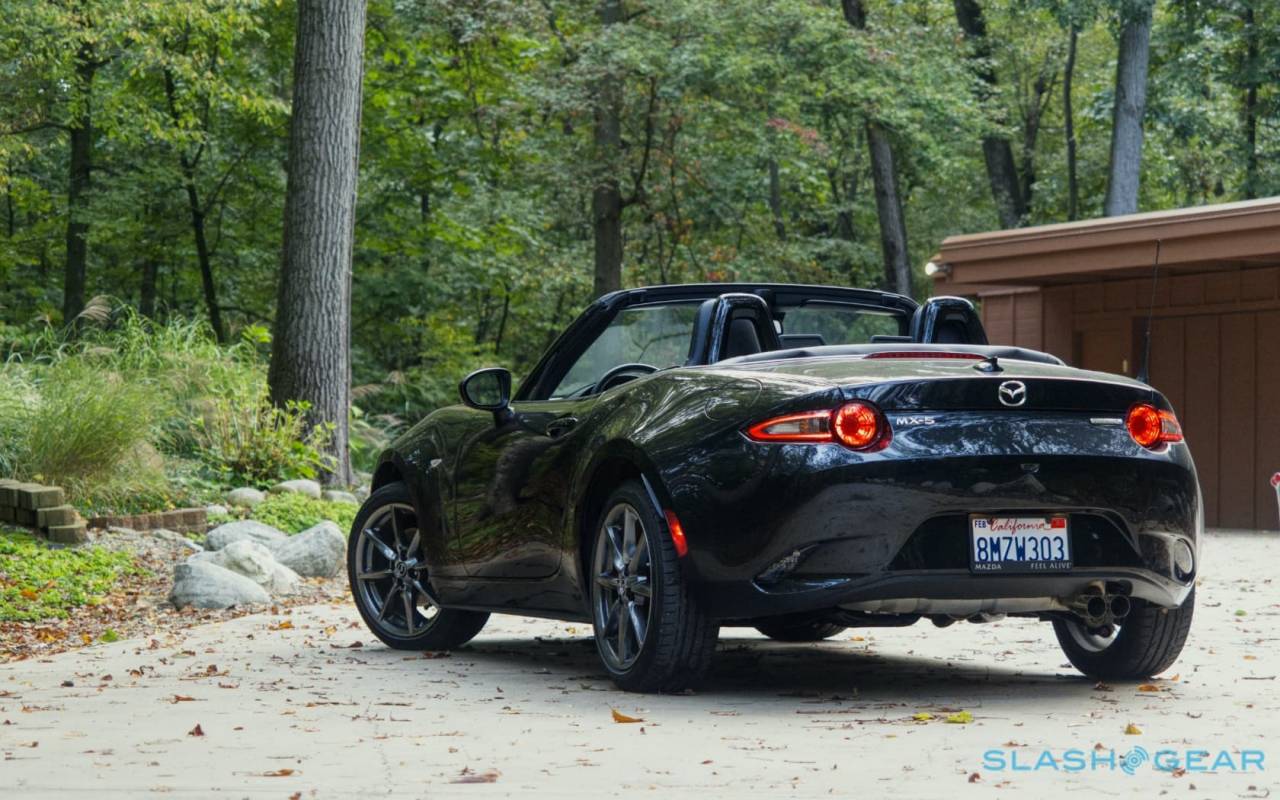 You also get Mazda’s deliriously good 6-speed manual transmission. Sure, you can get a Miata with an automatic – you’ll pay $1,350 for the privilege – but you shouldn’t. No, seriously, you really, really shouldn’t. If the thought of rowing your own gears in traffic turns you off, the reality is that the MX-5’s transmission and clutch are so perfectly weighted that it’s never really a chore. If you can’t drive a stick to begin with, well, there are worse cars to learn in than a Miata. Just be warned that you’ll basically be ruined for any other manual this side of a Civic Type-R. 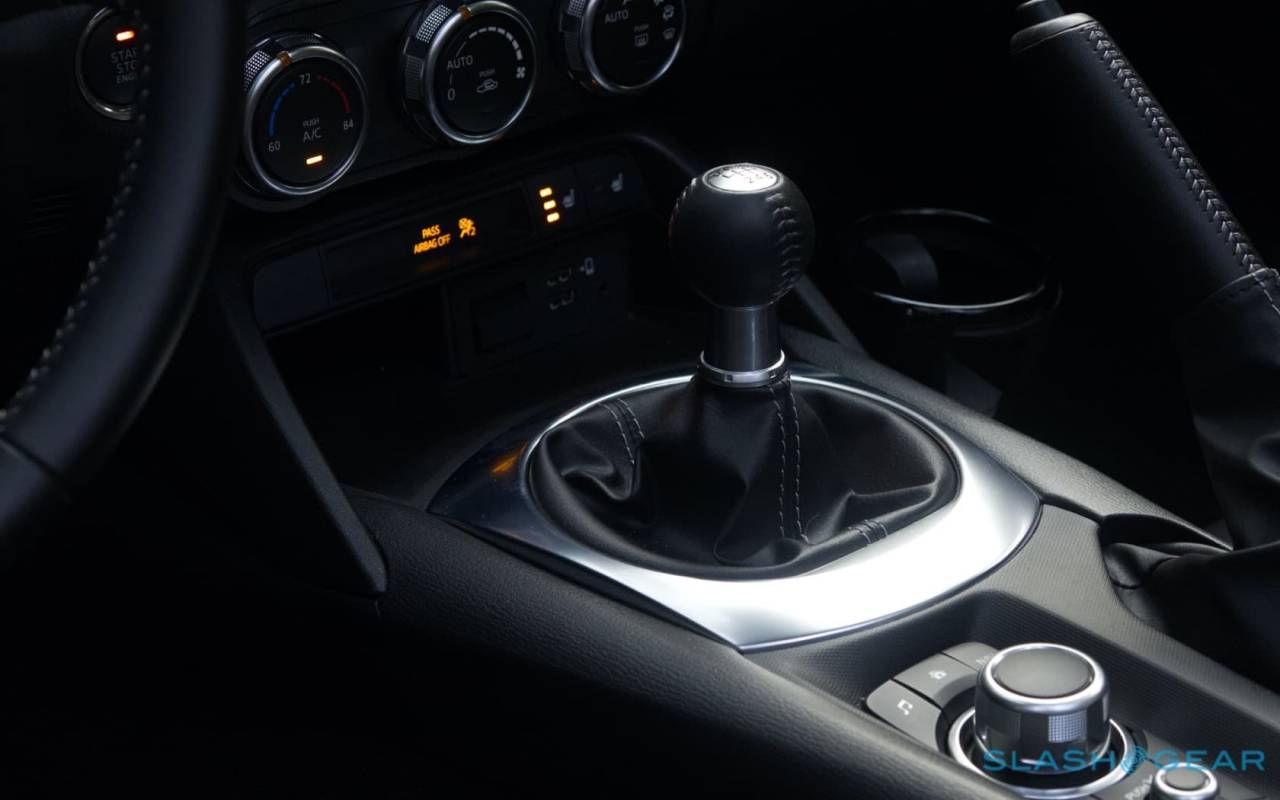 I’m not sure I could live with a Sport every day, but that prospect looks a lot easier to entertain with the 2020 MX-5 Miata Grand Touring. That clocks in at $31,670 plus destination, and adds both mechanical niceties and some creature comforts like heated seats to make the droptop more livable. There’s a Club trim in-between, from $30,290, which sacrifices the leather interior and navigation. 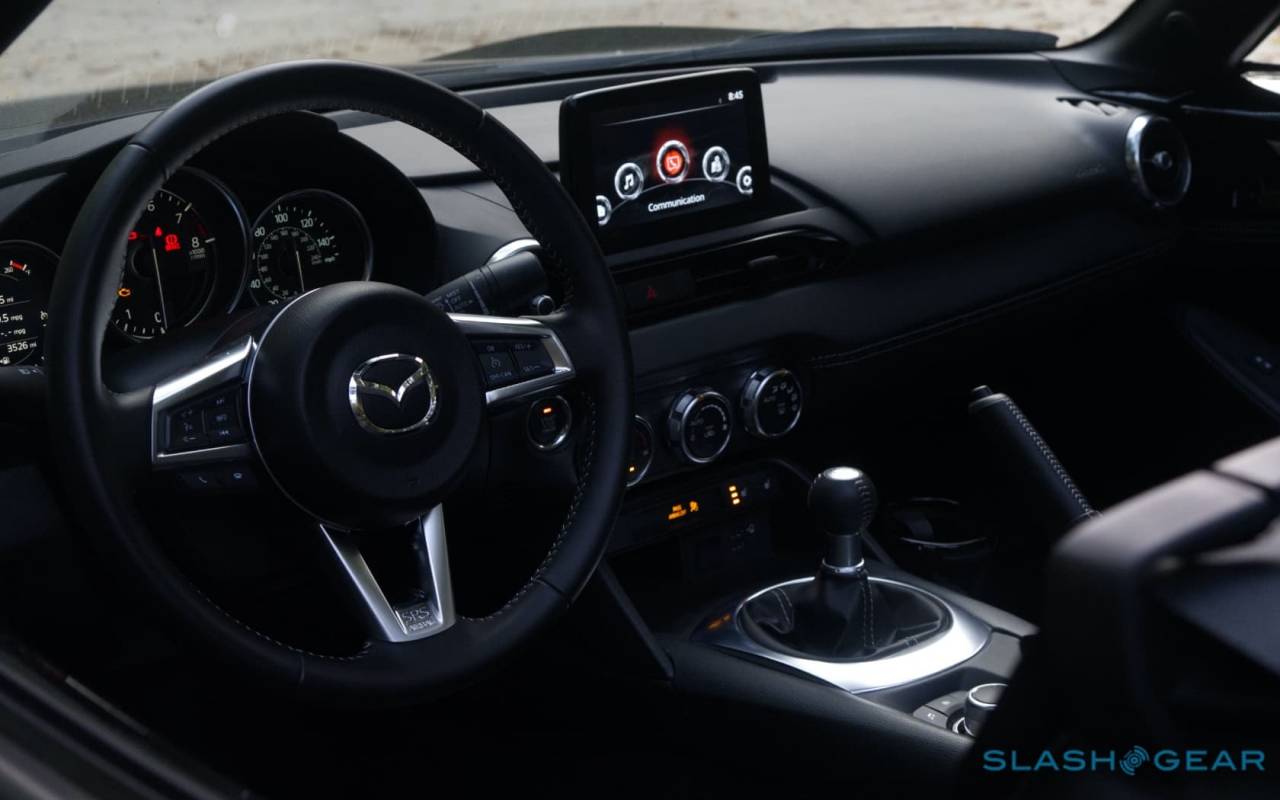 Both Club and Grand Touring get a limited-slip differential (only with the manual, mind) and sport suspension, while inside there’s a 7-inch touchscreen display with Android Auto and Apple CarPlay support. Mazda’s infotainment is, well, not exactly the most usable system – frustratingly it locks the touchscreen when you’re driving, leaving you to twiddle, infuriated, at a jog-wheel in the center console – so being able to plug in your phone and switch to Apple or Google’s UI is much more satisfactory. 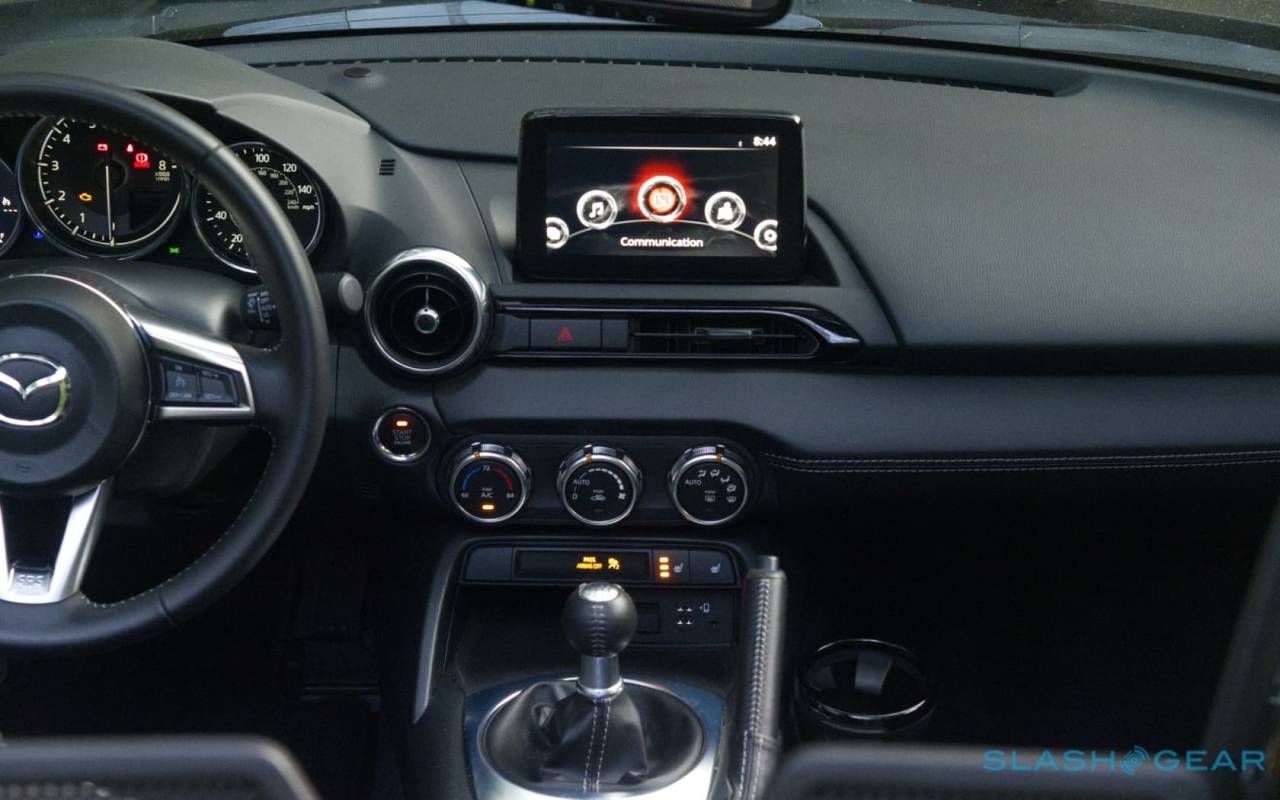 The rest of the cabin attempts to hide the cost-cutting required to hit the Miata’s aggressive pricing. Most of the primary controls are fine – the small, leather-wrapped steering wheel has a slender, readily-gripped rim, while the perfectly-sized shift knob is also clad in hide – and the switchgear, though hardly aesthetically striking, feels solid and straightforward. Your fingers don’t have to stray too far, though, to find dull plastics that in some places can feel downright flimsy. 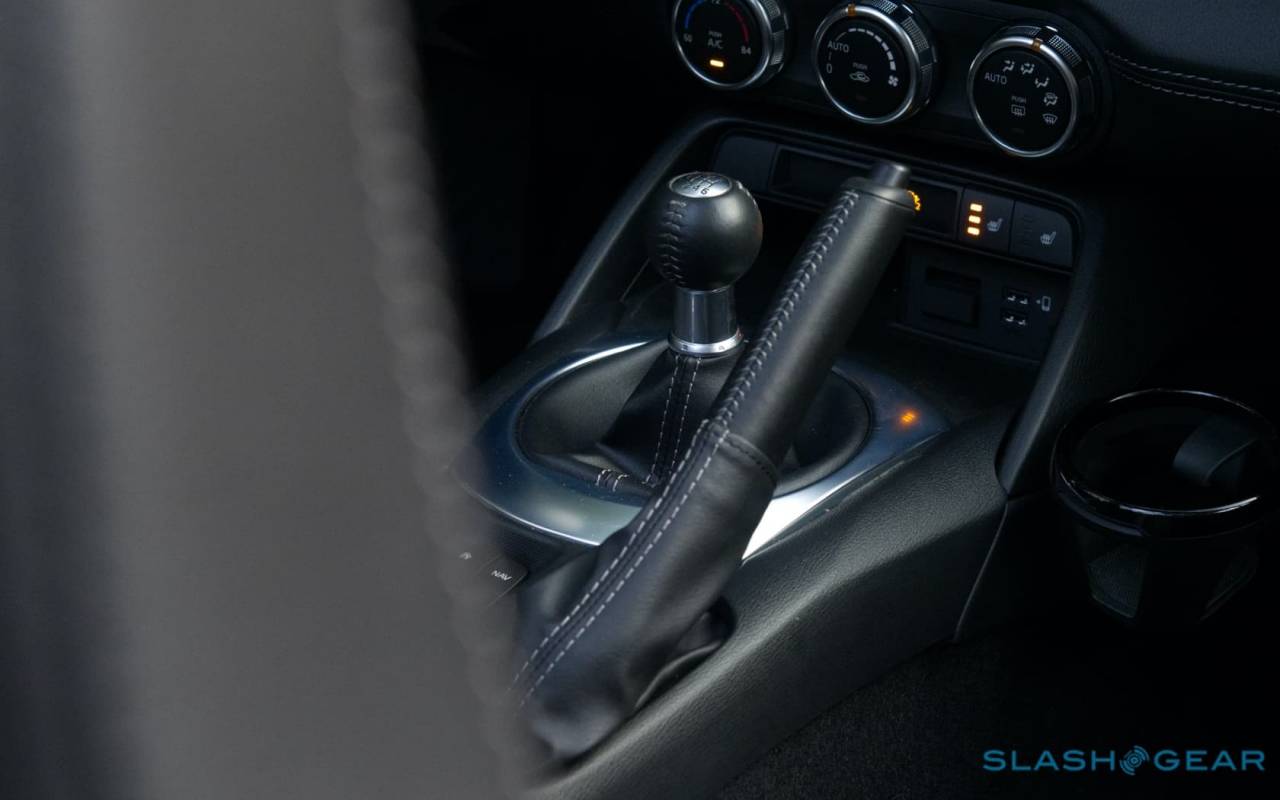 Again, I can stomach that, just as I’ll accept the minimal storage on offer. The manual roof – easy to open and close, without having to get out first – doesn’t eat into the trunk, which is good as that only offers 4.59 cu-ft. In-cabin cubbies and nooks are tiny, and the interior itself is very close. I’m 5’8 and it feels snug; six-footers and above are going to feel positively outsized.

They’ll put up with that, though, for how the Miata drives. With each generation, the purists wring their hands and worry that Mazda will inadvertently extinguish the little convertible’s spark; happily, there’s no sign of that happening. 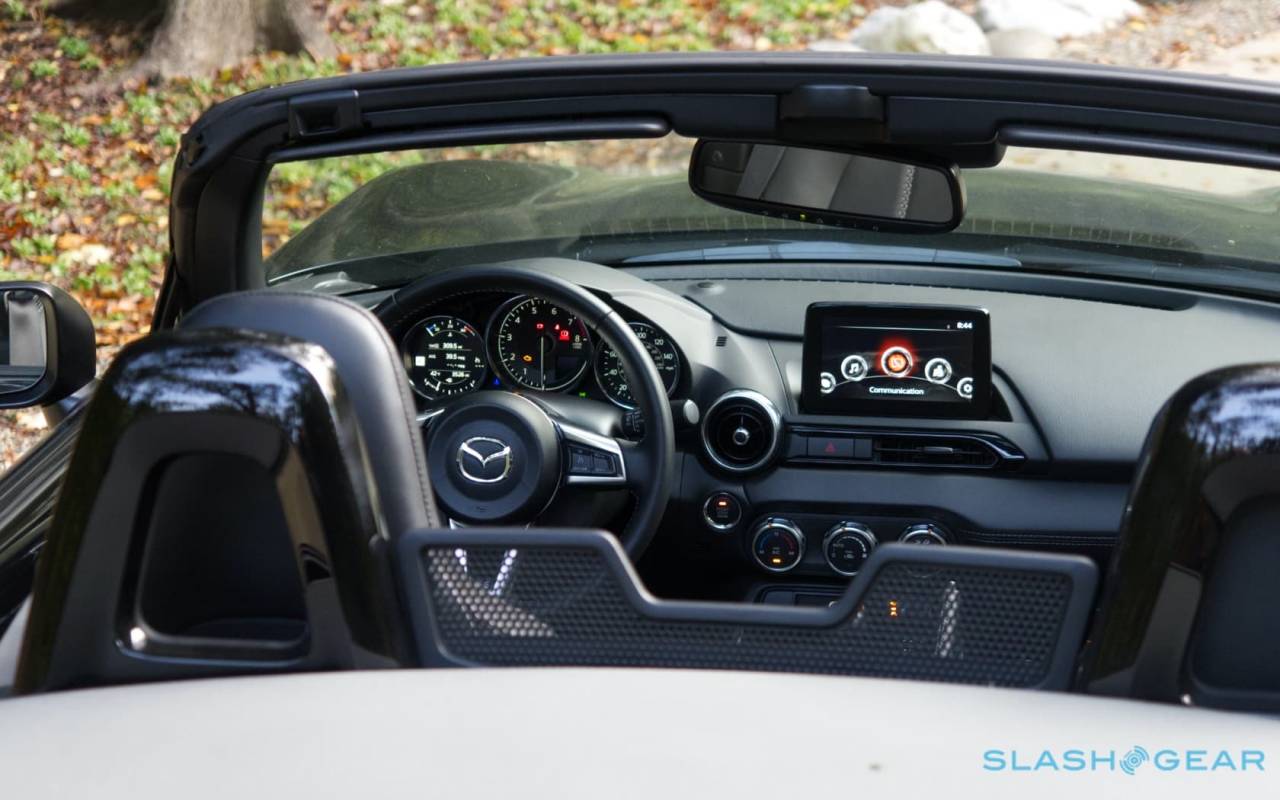 It’s a reminder that “more power” only really became necessary when we lost sight of lighter weight and exquisite tuning. The Miata’s dainty 2,341 pound heft is the perfect foil for power numbers that, on paper at least, seem low, but on the road cast you right into the center of the action.

You can’t just coast through on lashings of low-end torque, or rely on fancy electronic trickery to patch your uneven driving. The Miata expects you to use that stick-shift, the beautifully balanced clutch and short throw encouraging timely downshifts. Everything is focused on that perfect drive, from the outsized tach to the little display making sure you never forget what gear you’re in. 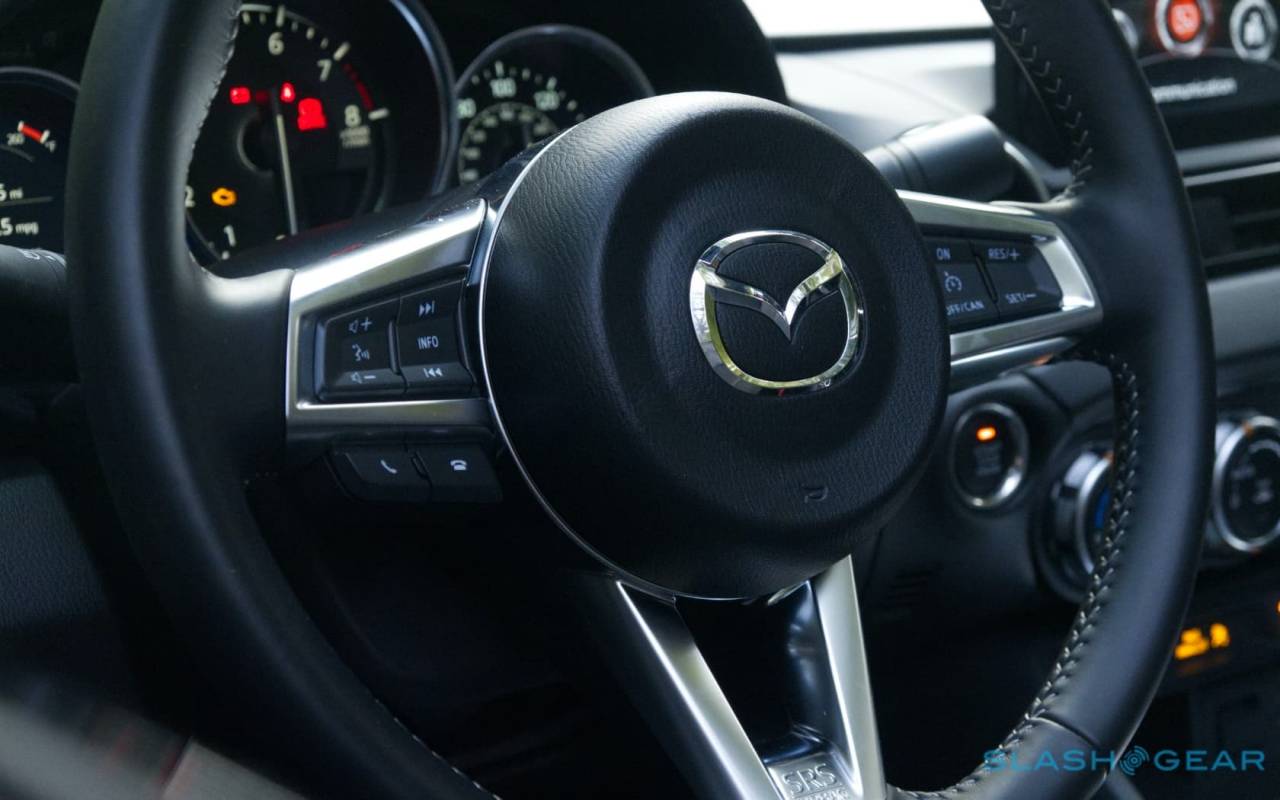 The steering is light and communicative, while the suspension setup leaves the Miata poised and playful in the corners. It’s not to say you can’t go cruising. I took the Miata on a couple hundred miles of highway driving and, while there was no shortage of wind and road noise even with the top up, it was a good reminder that this needn’t be just a weekend toy. Only the stiff Bilstein dampers – standard now on both Sport and Grand Touring – left me a little cool; they’re just too aggressive to suit that “GT” badging.

Mazda quotes 26 mpg in the city, 34 mpg on the highway, and 29 mpg combined, and they’re all eminently possible even if you allow yourself some fun along the way. 2020 cars also get some welcome standard safety tech, like blind spot monitoring, a lane departure warning system that loves to shout at you, and rear cross traffic alerts. Smart City Braking adds automatic emergency braking with front collision warnings. 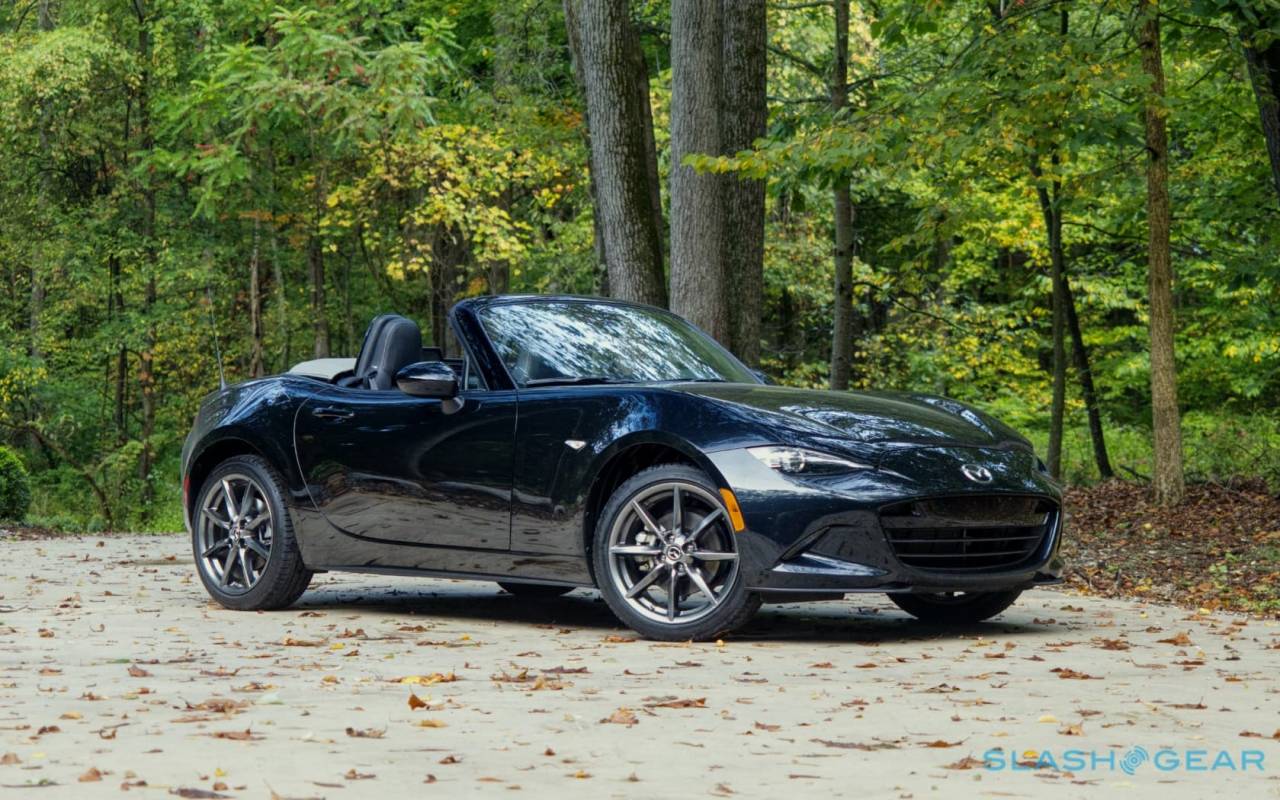 Honestly, I had no doubts that the Miata would charm in more playful driving. My biggest question was whether Mazda’s upgrades would leave it feeling more everyday-usable, whether that takes you in stop-go urban traffic or on long highway stretches. Get that right, after all, and suddenly the MX-5 stops looking like a second car plaything.

It proved to be a pleasant surprise. Yes, this still might not be my first pick for extended highway jaunts, but Mazda has definitely massaged the 2020 Miata into being a more well-rounded car, without losing its core appeal along the way. If the charms of driving have begun to fade, it doesn’t take long with the MX-5’s sublime stick-shift to remind you just why time at the wheel can be so rewarding, and now that fun needn’t be limited to evenings and weekends.