America was forced to wait for the Honda Civic Type R and now, having blessed us with its official presence here, Honda seems determined to slice away any mechanical reason you might have not to buy one. At under $38k out the door, the 2020 model year may have seen the price climb a little, but the attention to detail has jumped a whole lot.

There’s no confusing the Type R for any other Civic, that’s for sure. Huge rear wing, chunky arches, gaping spoiler vents, and a hood scoop for good measure, and that’s before you get to the scattering of blades and the contrast pinstripes. Honda has a lot going on here, and I’m not convinced it all works. 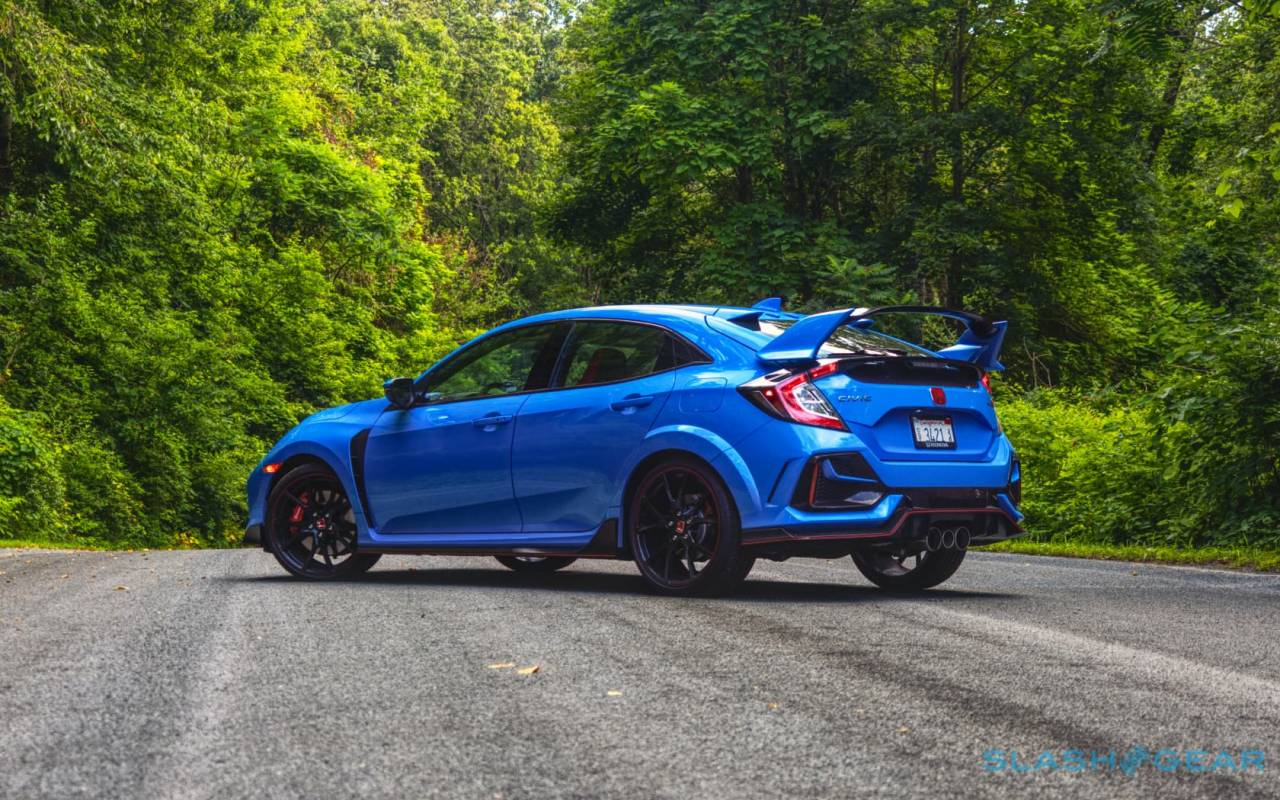 Am I crazy for wanting my feisty Civic to look a little more… reserved? It hasn’t always been this way: earlier generations that wore the Type R badge were far more modest in their flares, scores, and spoilers. Sometimes it was only the glint of red in the Honda badging that gave the game away that you’d been passed by something special.

The 2020 Civic Type R, though, shouts visually even when you’re trying to be sedate. If other drivers aren’t trying to goad you into a race away from the lights, they’re giving you filthy side-eye on presumptive hooliganism charges. It all feels like the Honda is trying a bit too hard – wasted effort when the car is clearly good enough not to need such bluster. 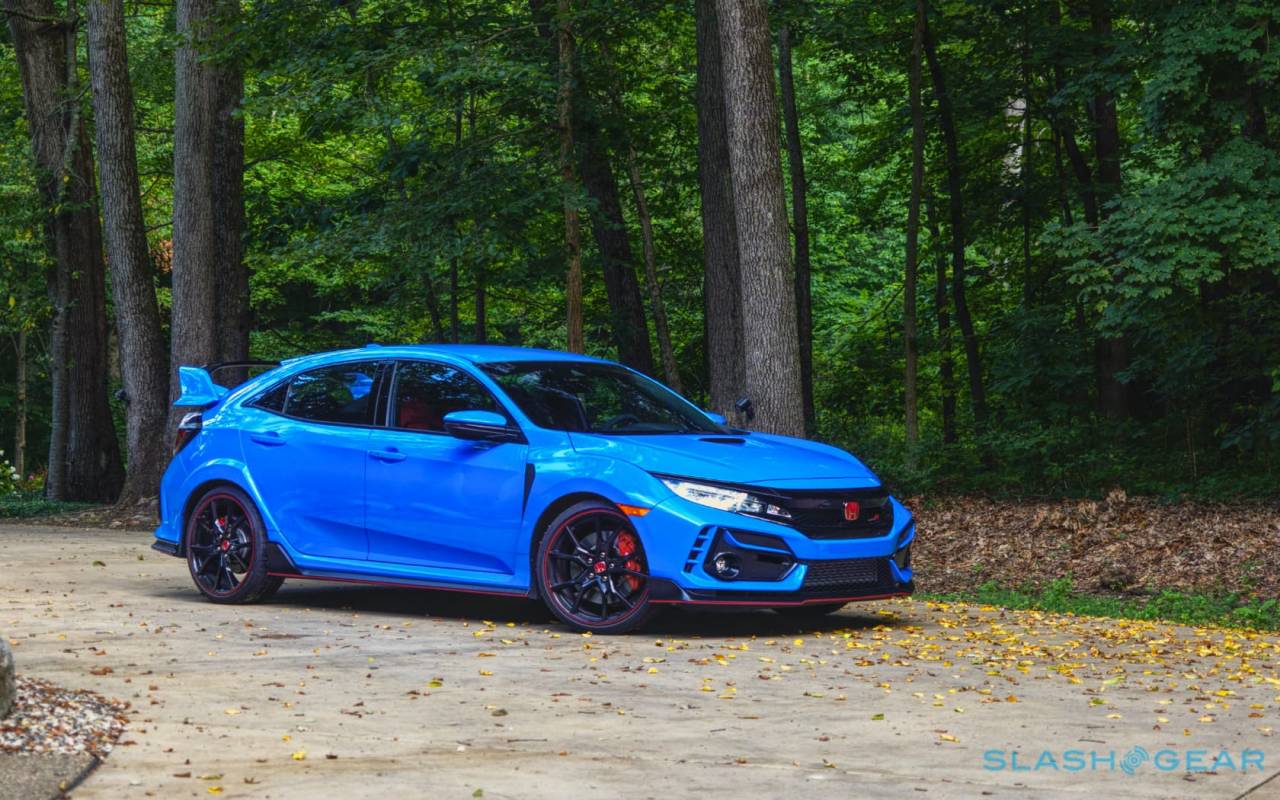 Part of the frustration is not quite knowing just what could’ve been left off. Plenty of the Civic Type R’s angular flourishes are functional, and indeed the 2020 model year sees tweaks there too. Stung with criticisms of heat-related fading track performance, Honda opened up the front grilles to boost cooling. That had a knock-on impact on downforce, however, and so the front spoiler needed some finessing too.

Star of the Civic Type R show is the gearbox. Honda’s six-speed manual is the only transmission you can have, but that’s no hardship when it’s this darn good. For 2020 the ball grip is now an extended lozenge of metal, counterweighted for maximum tactile reward. It fills your palm like the most perfect stress toy. 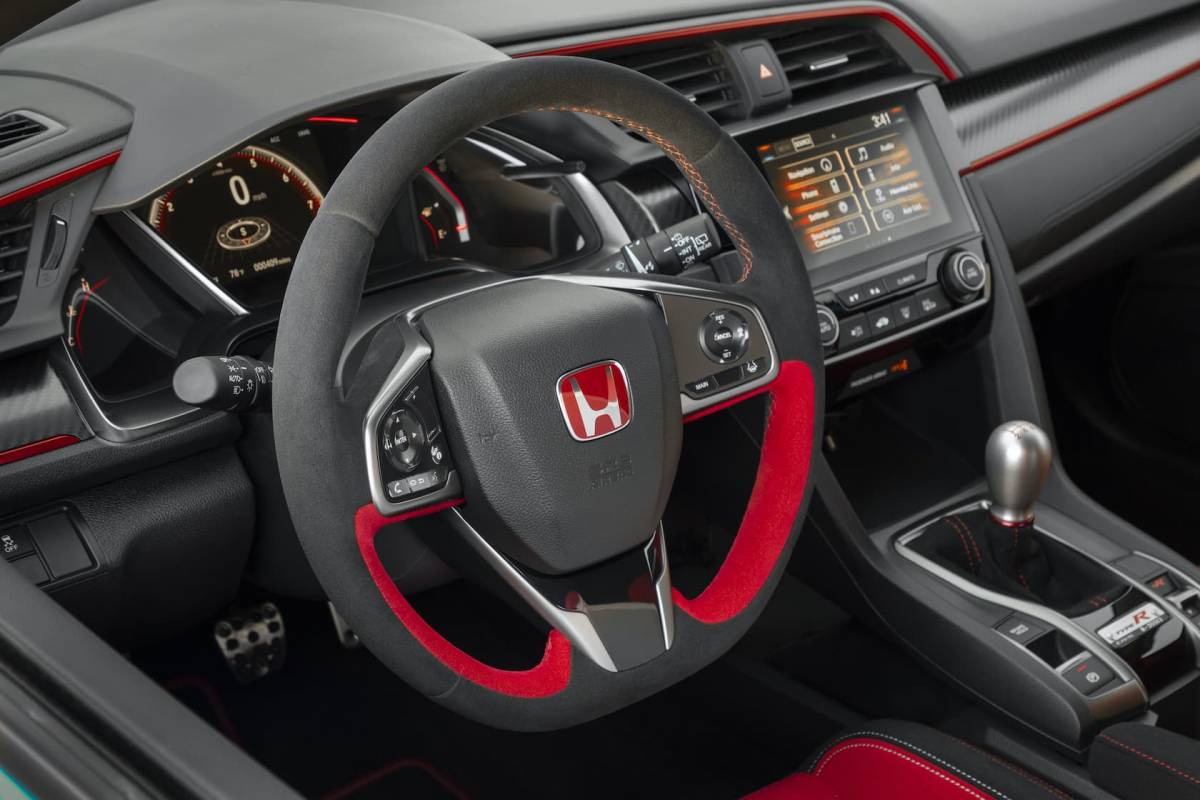 Just the right amount of throw, just the right degree of resistance; the word “snicks” really was invented for this manual. Combined with a beautifully weighted clutch neither too soft for urgent driving nor too heavy for day-to-day use, it’s perhaps a reminder that, were every gearbox this exemplary, perhaps stick-shifts wouldn’t be in quite so rapid a decline in America.

The 2.0-liter turbocharged inline-four still offers 306 horsepower, 295 lb-ft of torque, and a 7,000 rpm redline. I think that’s just right on all three counts; any more, and you’d find yourself at license-losing speeds too rapidly. 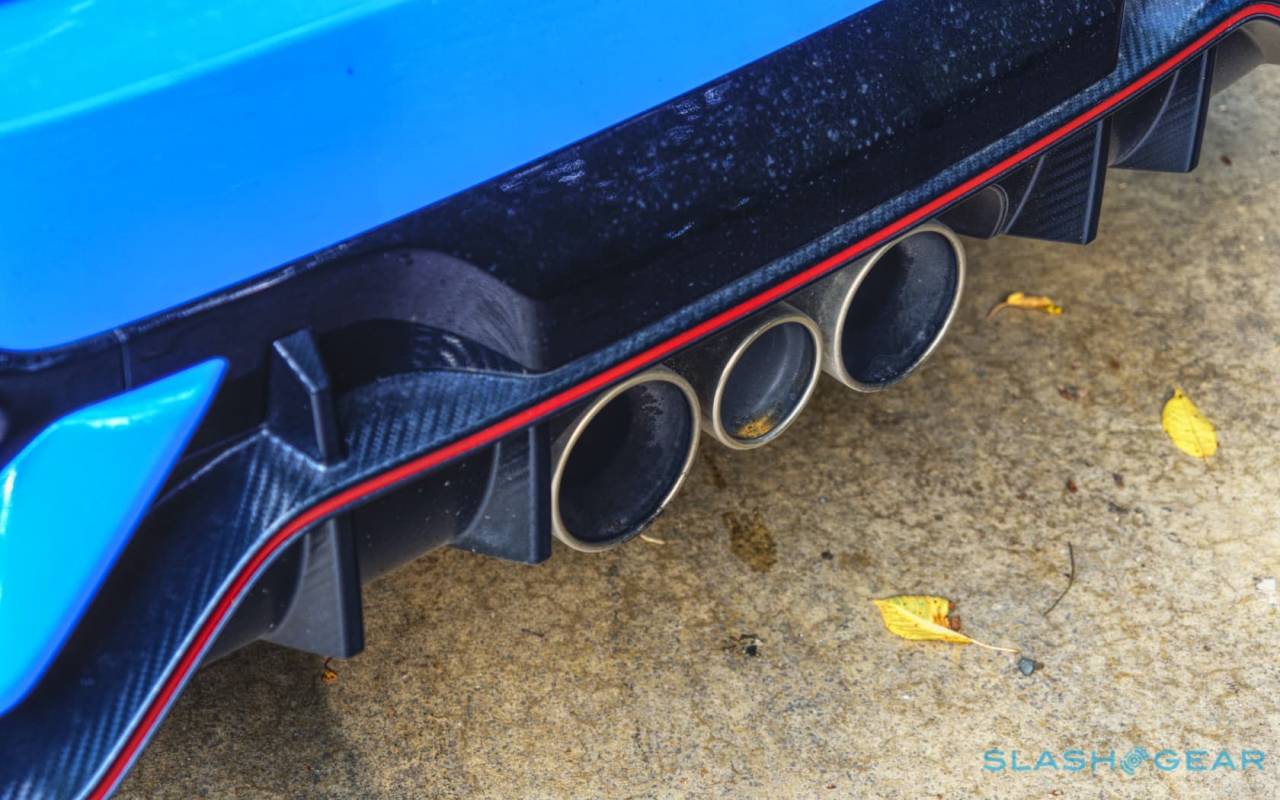 Instead you’re motivated to keep the Type R in its most potent territory. Peak torque arrives at 2,500 rpm, but it’s at 3,500+ when the best sound from the trio of exhaust trumpets kicks in. I know Honda’s new “sound enhancement” using the cabin speakers isn’t popular, and I’ll agree with those who wish there was a switch to turn it off altogether, but viewed glass-half-full it’s just an invitation to try to drown it out with what comes out of those gobby tailpipes. 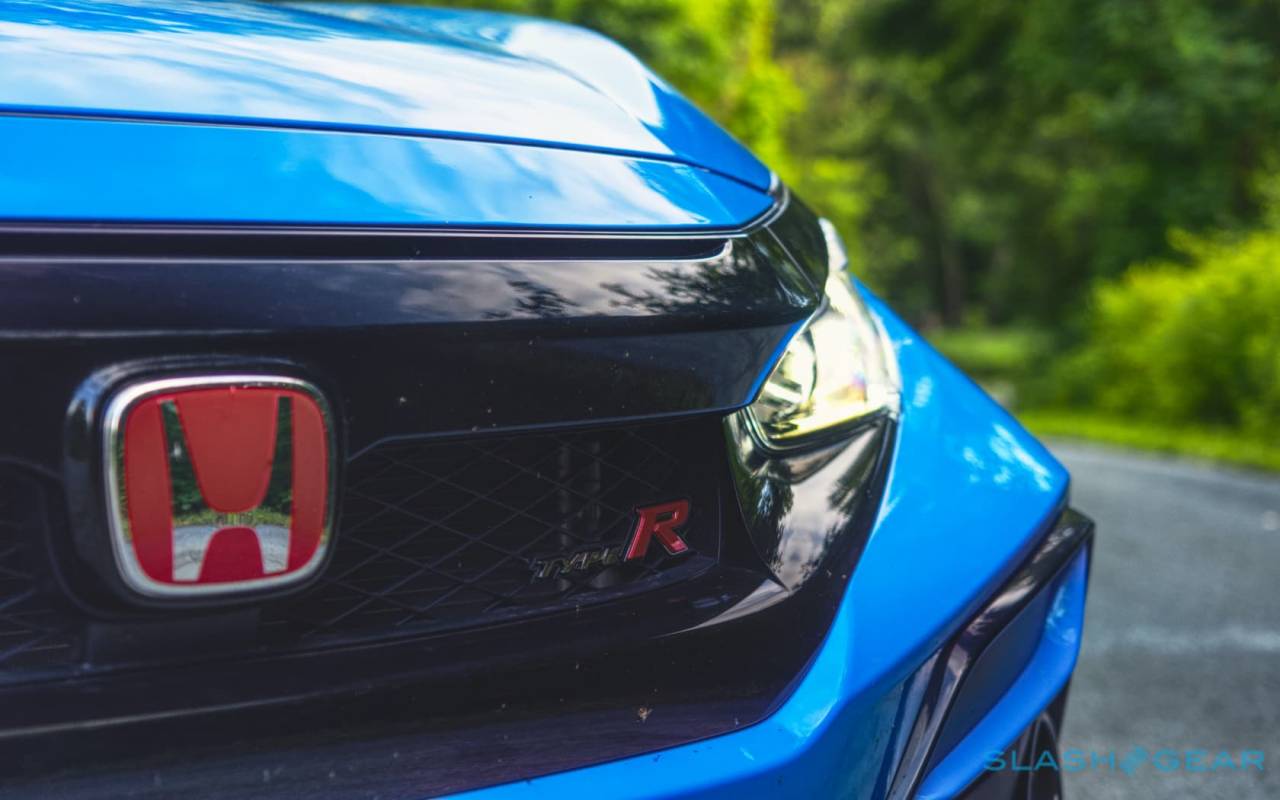 With the exception, perhaps, of the more immediate braking, the overall impression is one of a more general polish rather than one thing you can specifically pinpoint. Last year’s Civic Type R was excellent; this year’s is excellent-plus.

For a car this firm, this capable in the corners, it’s astonishing just how compliant it can be on unruly road surfaces. Tack the drive mode switch down into Comfort from its default Sport, and you’d never believe the Type R was riding on 20-inch alloys with ridiculously low-profile Continental SportContact 6 summer rubber. It’s taut without being stiff – hit the lip of a raised manhole cover and, though you’ll certainly know about it, at least your teeth won’t be shaken forcibly from your face. 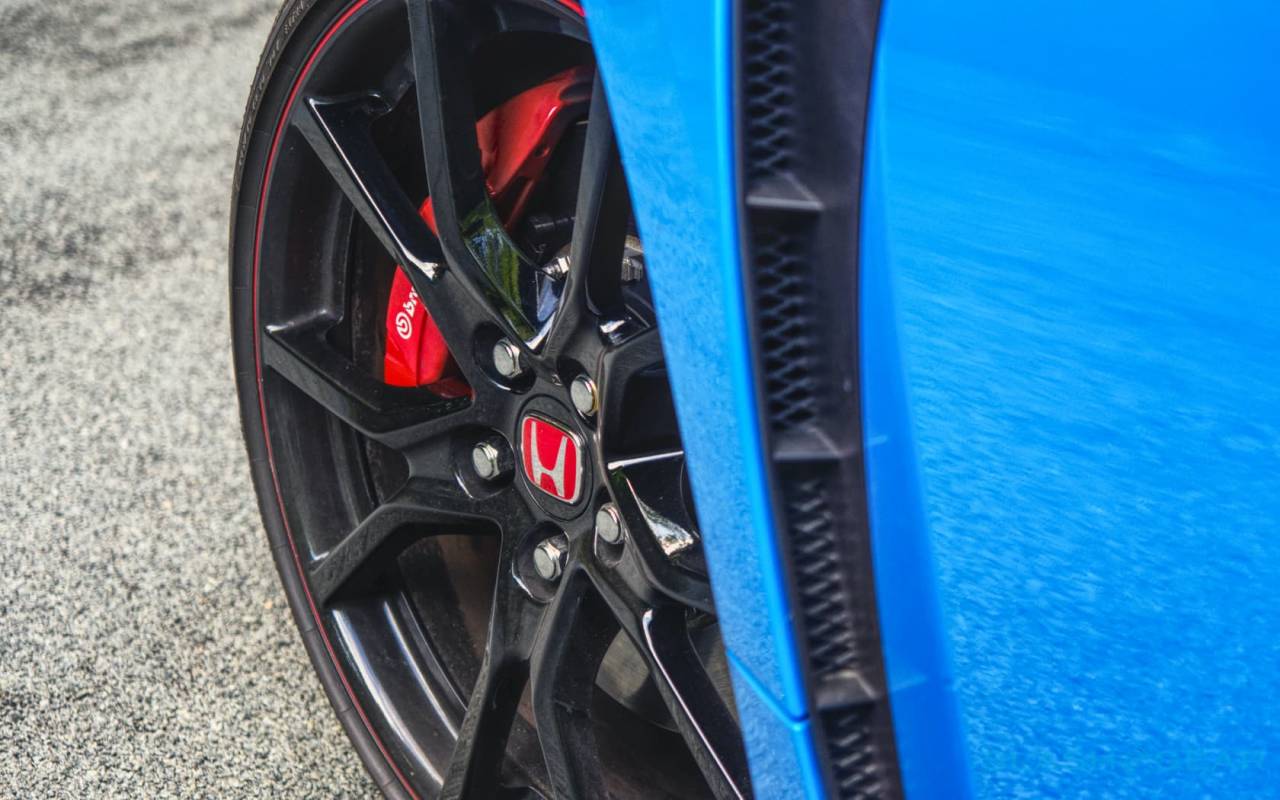 At the other extreme, Sport or the top R+ mode don’t let the front-wheel drive hold them back. Honda may not have an AWD option, but the Type R really doesn’t need it. Not only does grip never feel like it’s in short supply, the Civic is so communicative that it’s hard to overcook things. Understeer just isn’t a problem, and nor does relying on the front axle alone for steering and power bring out the dreaded torque steer.

Clearly there’s plenty going on behind the scenes, but the Type R is a flatterer. You could easily think yourself a much better driver than you really are, Honda’s cunning engineering acting as a filter for those things that would be pratfalls in lesser cars. The limits are out there, sure, but you’d probably need a track (or a death-wish) to discover them. 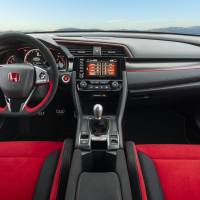 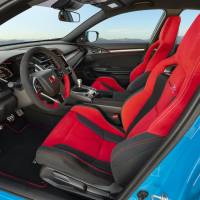 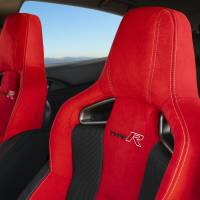 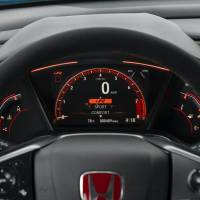 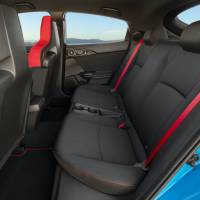 Inside, the familiar Civic cabin gets some go-faster trim. The old leather wheel is rewrapped in grippy Alcantara, while the sports seats remain generously bolstered and comfortable even over extended drives. There’s still no heating or cooling option, however.

Honda’s infotainment system supports Android Auto and Apple CarPlay, both served up on a 7-inch screen that feels a little small these days. New for 2020 is a companion app which distills your driving metrics onto your smartphone. However if you’re looking for different seat colors than brazen red and black, or a three-seat bench option for the rear, you’ll be searching in vain. 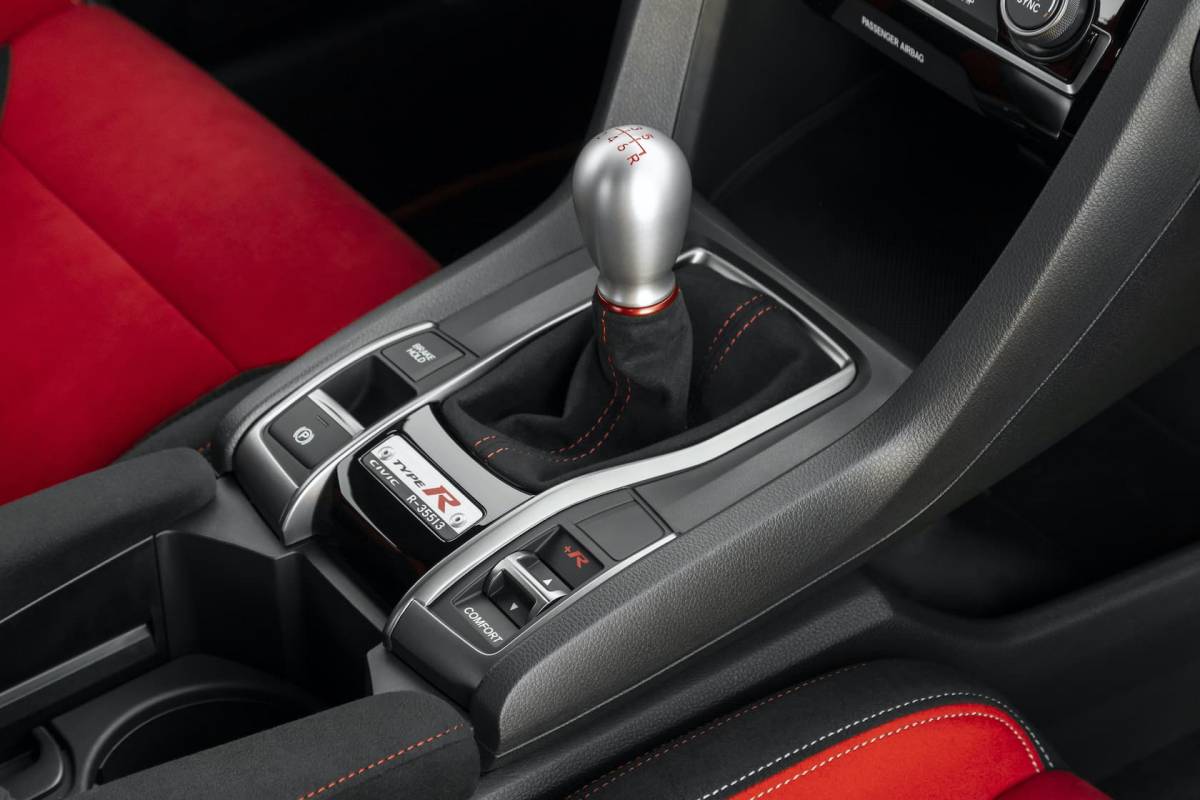 Indeed Honda’s options list is an unsually short one. The $36,995 sticker (plus $995 destination) comes with Honda Sensing as standard, including adaptive cruise control, lane-keeping assistance, road departure mitigation, and collision mitigation braking. Navigation is standard, too.

There are two dealer packages you may want to consider. $3,673 gets the Carbon Fiber Kit, with reddish-tinted carbon fiber accents for the rear wing, hood scoop, side mirrors, and interior panels. The $1,112 Interior Package adds red interior lighting and illuminated door sills, a red wrapped shift knob, Type R mats, and illuminated center console strips. Honestly, you can do without both. $314 adds a Qi wireless phone charging pad.

In a car that drives with such perfect balance, it probably comes as no surprise that it’s the excessive styling which is my biggest problem with the Civic Type R. Honda has created a car the dynamic equal of rivals three, four times its price, but its design smacks of a shortage in self-confidence. It’s a hang-up that’s undeserved. 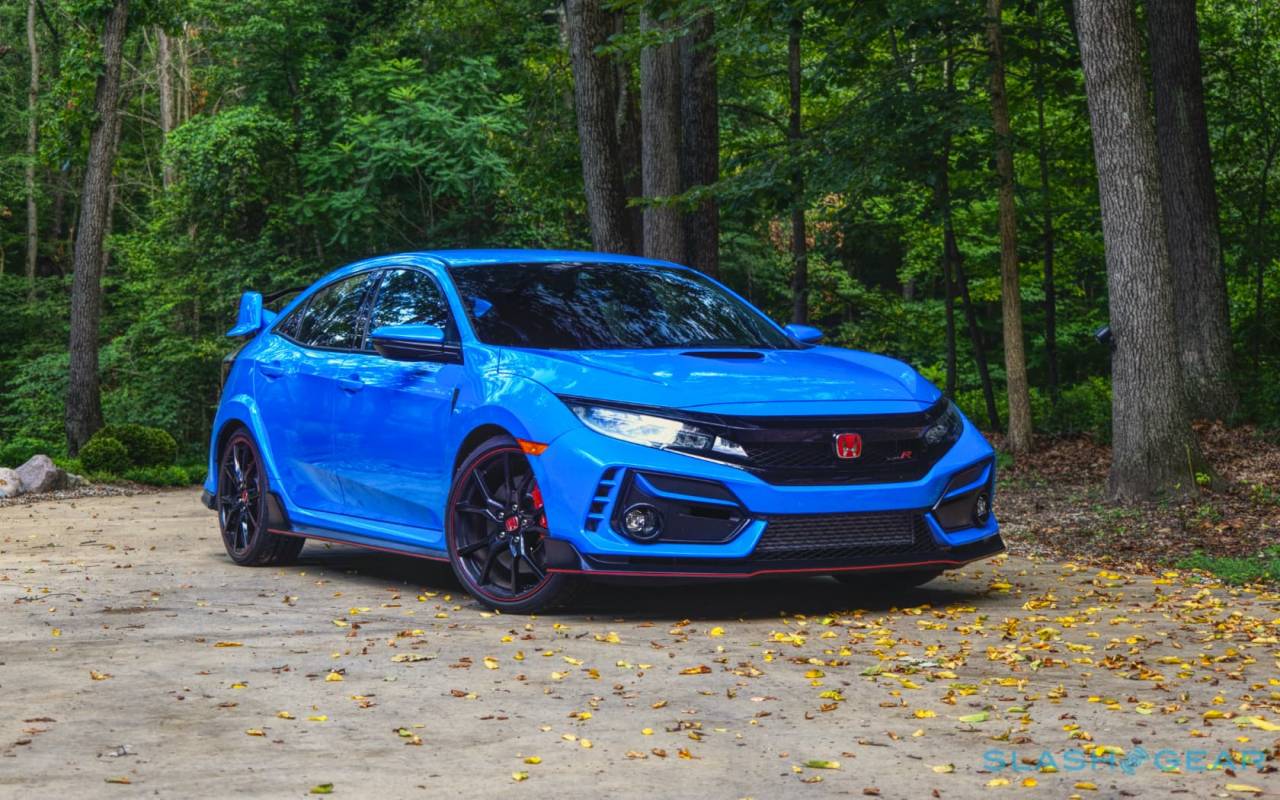 You shouldn’t let that stop you, of course. The Boost Blue Pearl paint job may be new for 2020, but you can still have the Type R in black or silver, which feel a tad less ostentatious. To count it out for looks alone – opting, maybe, for the sober Golf R instead – would be needlessly ascetic.

That’s not the restraint the Type R subscribes to, and if it sidesteps profligacy it’s because Honda knows that poise is the surest way to satisfaction. Beauty may be in the eye of the beholder, yes, but nobody could argue with the fact that the 2020 Civic Type R drives like an attainable dream.