Lincoln is taking luxury SUVs seriously, and the 2020 Aviator is fine evidence of that. Bringing another three-row option to the automaker’s range, it may be smaller than the Navigator but the new Aviator is no less luxurious. Indeed, with a potent 630 lb-ft of torque to play with in 2020 Aviator Grand Touring Hybrid form, there’s an argument to be made that this could be the best example of Lincoln’s “American Luxury” yet.

Design is subjective, so I’m going to subjectively say that I take great pleasure in the Aviator’s in-your-face styling. There’s no mistaking either the brand or the lineage: it carries over most of the boldness of the larger Navigator, diluted only a little for this smaller model. 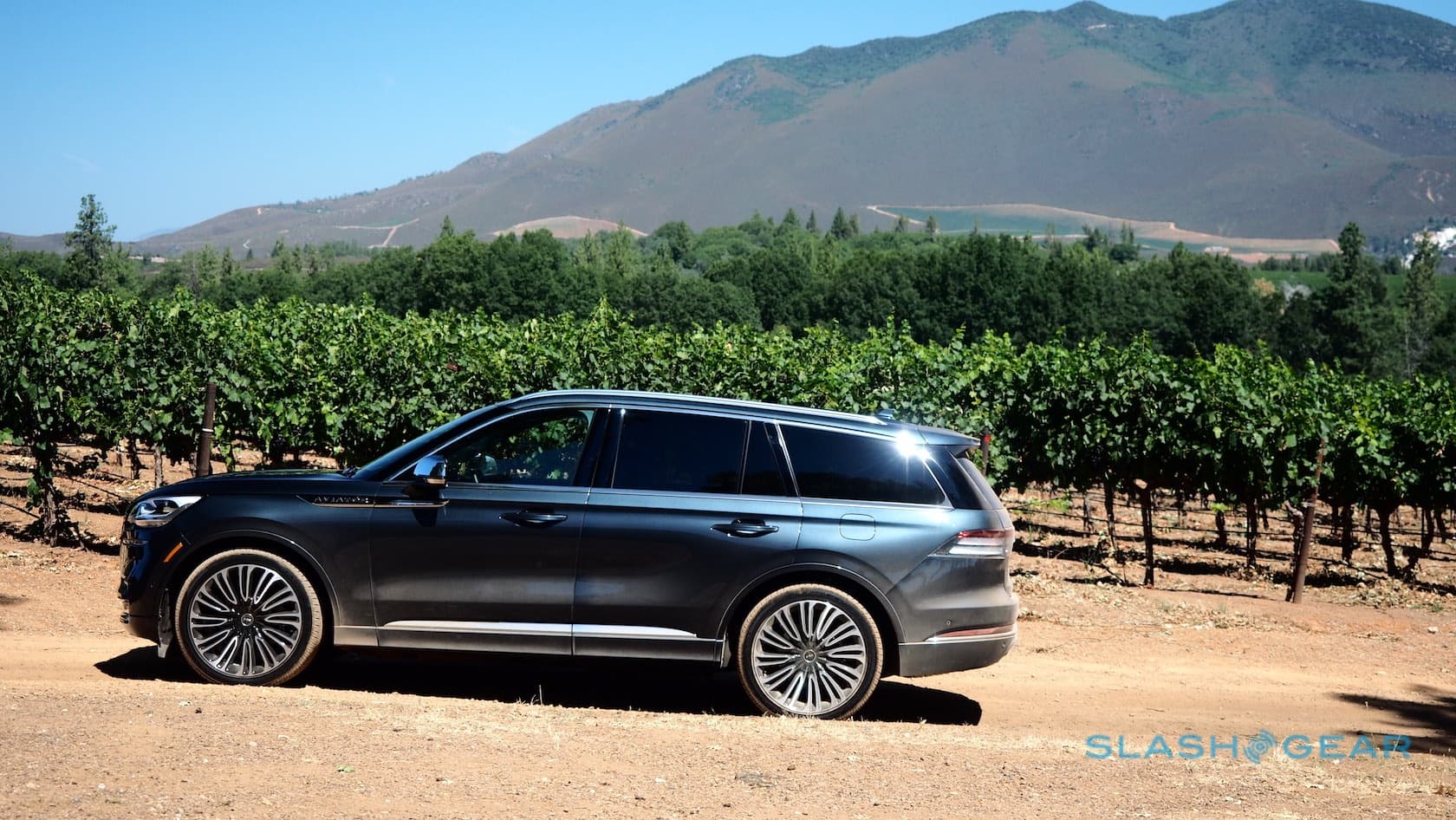 Like other recent Lincoln SUVs, the Aviator’s dashboard is a distinctive – bordering on brash – interpretation of luxury. A huge 10.1-inch touchscreen tops the center console, above dedicated knobs and buttons for the HVAC. The steering wheel has twin joysticks and context-specific illuminated graphics, along with a handy voice control button that falls right under your thumb at the 10 o’clock position. A row of toggles for the transmission are sandwiched in-between. There’s plenty of glitzy chrome and wood, not to mention copious nooks and cubbies for storage.

I’d like it more if the materials felt like they looked. The chromed switchgear reveals itself to be plastic when your fingertips get involved; parts of the trim flex when you push them. Not to the point where I’d fear they’d fall apart any time soon, but it’s a frustrating oversight in places you’re going to be touching every day. The same goes for some passé plastic textures across the dash and door tops, grooved like the rump of an elephant. 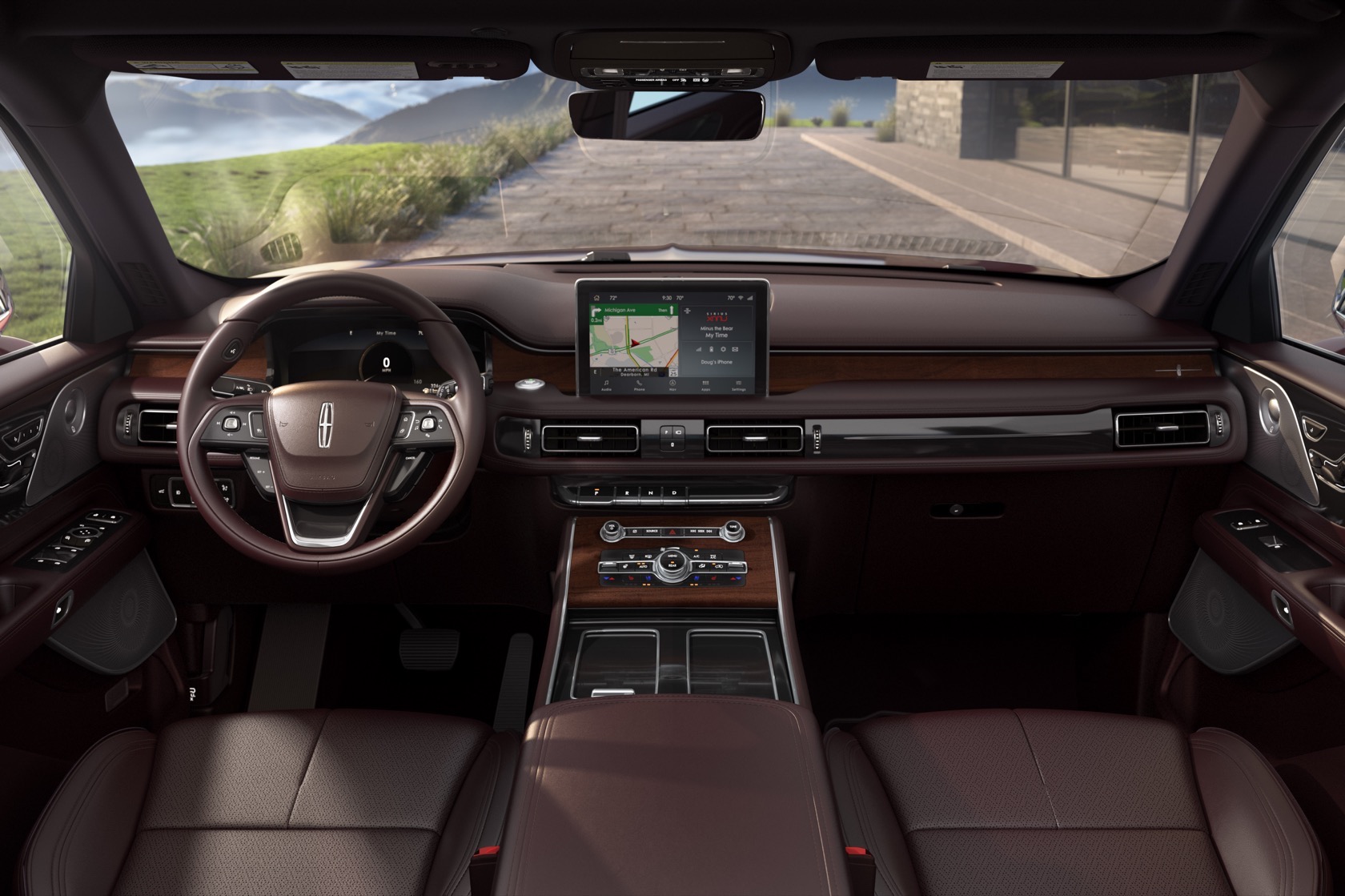 One thing you’re not short on is space, at least in the first and second rows. Lincoln offers the Aviator with either a bench or a set of captain’s chairs in the second row; passengers there also get their own touchscreen for the climate control and multimedia, and the option of both heated and – unusually – ventilated seats. Things do feel more confined in the third row, perhaps because Lincoln opted to nudge the seats forward slightly in the name of greater cargo space behind them. 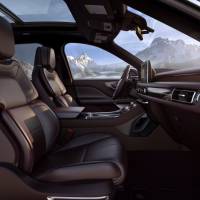 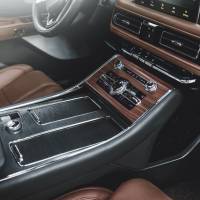 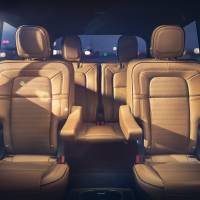 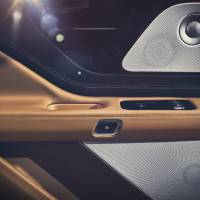 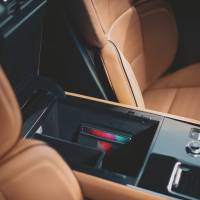 Volvo’s XC90, for example, has almost 3-inches more third row legroom, but then 2.5 cubic feet less trunk capacity with all three rows up. The Aviator offers 18.3 cubic feet in contrast, or 41.8 with the third row folded. Towing capacity is between 5,600 and 6,700 pounds, trim depending.

Lincoln Phone As A Key

Lincoln is unusually excited about the ability to use a phone as your Aviator’s key, and to be fair the technology is fairly slick. As you’d expect, you can remotely check the Aviator’s status – whether the engine is running, how much fuel is left, that sort of thing – from the iOS and Android app. With your phone in your pocket, though, you can just walk up and pull the handle to open the door. 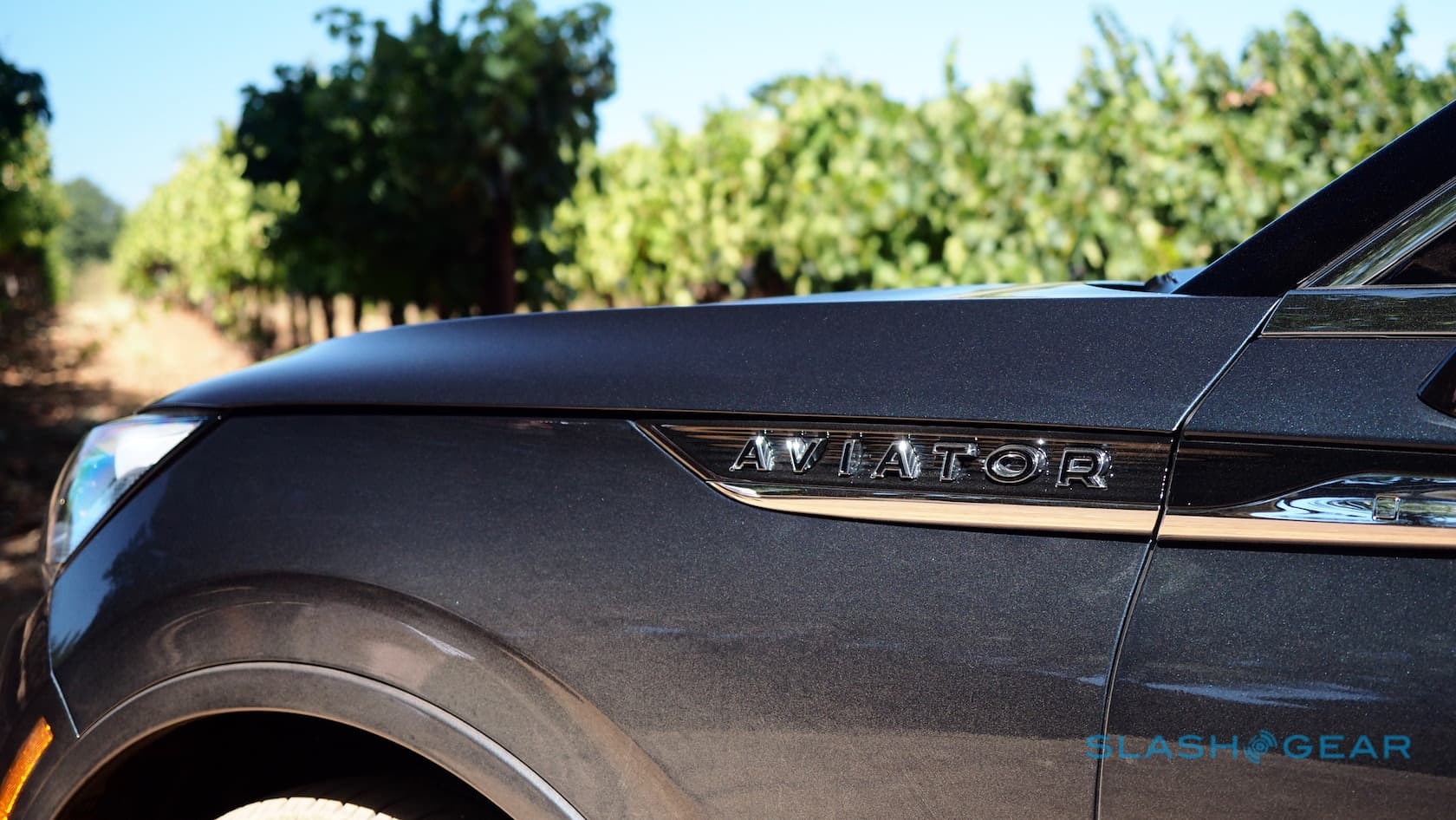 There are eleven Bluetooth antennas spread around the Aviator, which communicate with your phone to authenticate you. It’s not just the SUV unlocking, either. While that happens, the seats, mirrors, steering wheel, and other settings are all whirring into place, according to your favored presets. It’ll even adjust the ambient lighting and HVAC temperatures to what you like.

It’s clever, though whether it’s markedly better than just a regular key fob is arguable. Lincoln will offer Phone As A Key as part of the Convenience Package, which also includes a head-up display, Qi charger between the front seats, and soft-close doors, with the smartphone key functionality being activated late this Summer.

2020 Lincoln Aviator on the road

With a 3.0-liter twin-turbocharged V6 to play with, the entry-level 2020 Aviator eschews the turbo inline-fours some of its rivals have made do with. On paper the 400 horsepower and 415 lb-ft of torque are healthy, too, combined with a 10-speed automatic transmission and either rear- or all-wheel drive. The former is expected to get 18 mpg in the city, 26 mpg on the highway, and 21 mpg combined, while the latter sees those numbers dip to 17 mpg, 24 mpg, and 20 mpg respectively. 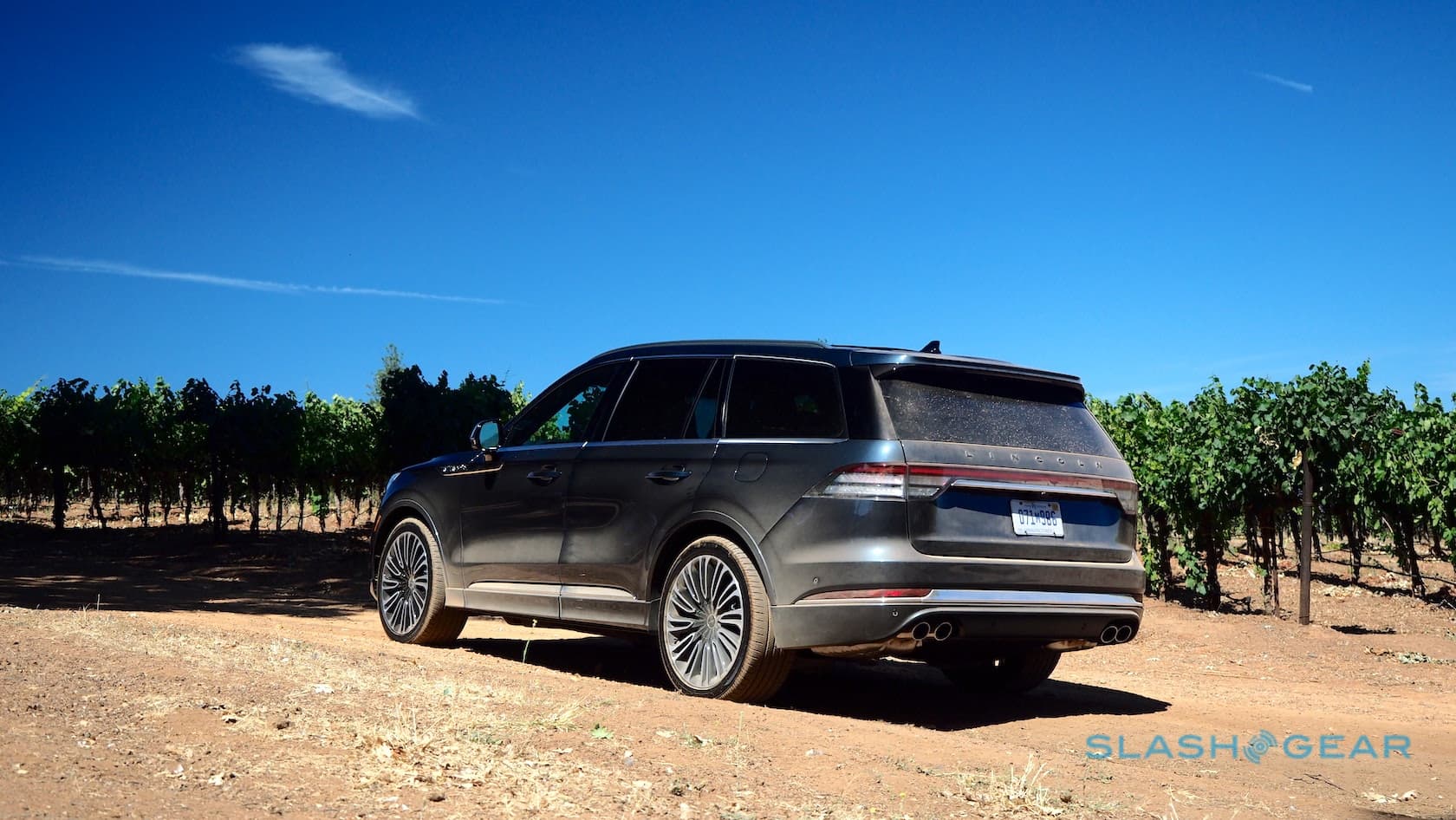 Out in the all-wheel drive Aviator, the 4,892 pound curb weight does show its hand. The Aviator isn’t underpowered, but it doesn’t feel potent either. Foot to the floor, the acceleration isn’t going to risk forcing your eyeballs back into your skull. The upside is that it’s comfortable and makes excellent company on lengthy road-trips, particularly if you upgrade the suspension.

As standard, the Aviator gets coil springs, but adaptive suspension is available and then Air Glide on top of that. The Dynamic Handling Package gets you road preview, promising to scan the asphalt ahead with the front-facing camera and then preemptively adjust the damping to minimize the impact of potholes and bumps. The Air Glide system also allows for different ride heights, including lowering the Aviator to make getting in and out more straightforward. 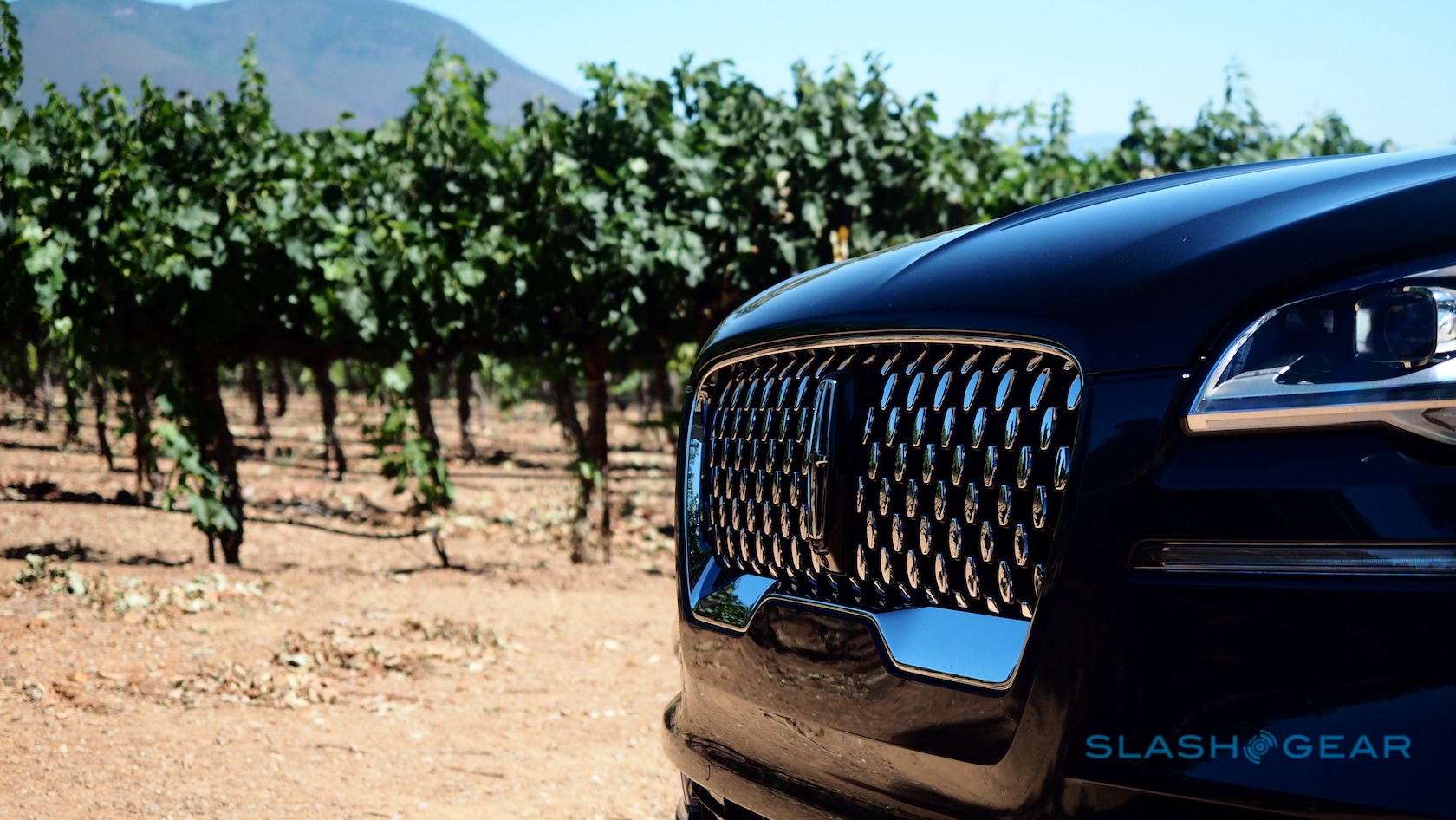 Since there’s no way to turn off the road preview system, it’s hard to know exactly how well it’s working. Road imperfections certainly still made themselves known in the cabin. Better is the acoustic treatment, with Lincoln investing in extra insulation and laminated glass for both the first and second rows, which helps keep cabin noise muted.

When you do hear the engine, it’s typically when you’ve asked it to push hard. The 10-speed can occasionally get caught out, on occasion dropping down several gears in rapid succession as the Aviator tried to catch up with the road. Similarly confusing are the drive modes, which Lincoln serves up in one, long gallery like an old iTunes interface of albums. The graphics may be sleek, but it can take time to page through them – and that’s assuming you remember which way to turn the dial.

Star of the Aviator show is the Grand Touring, Lincoln’s name for its plug-in hybrid version. Electrification makes perfect sense for luxury vehicles, I’ve always thought: the hush of an EV drive, combined with its low-end torque and absence of vibrations, make it the perfect foil for a premium car. In this case, it makes the Aviator Grand Touring the car to aspire to. 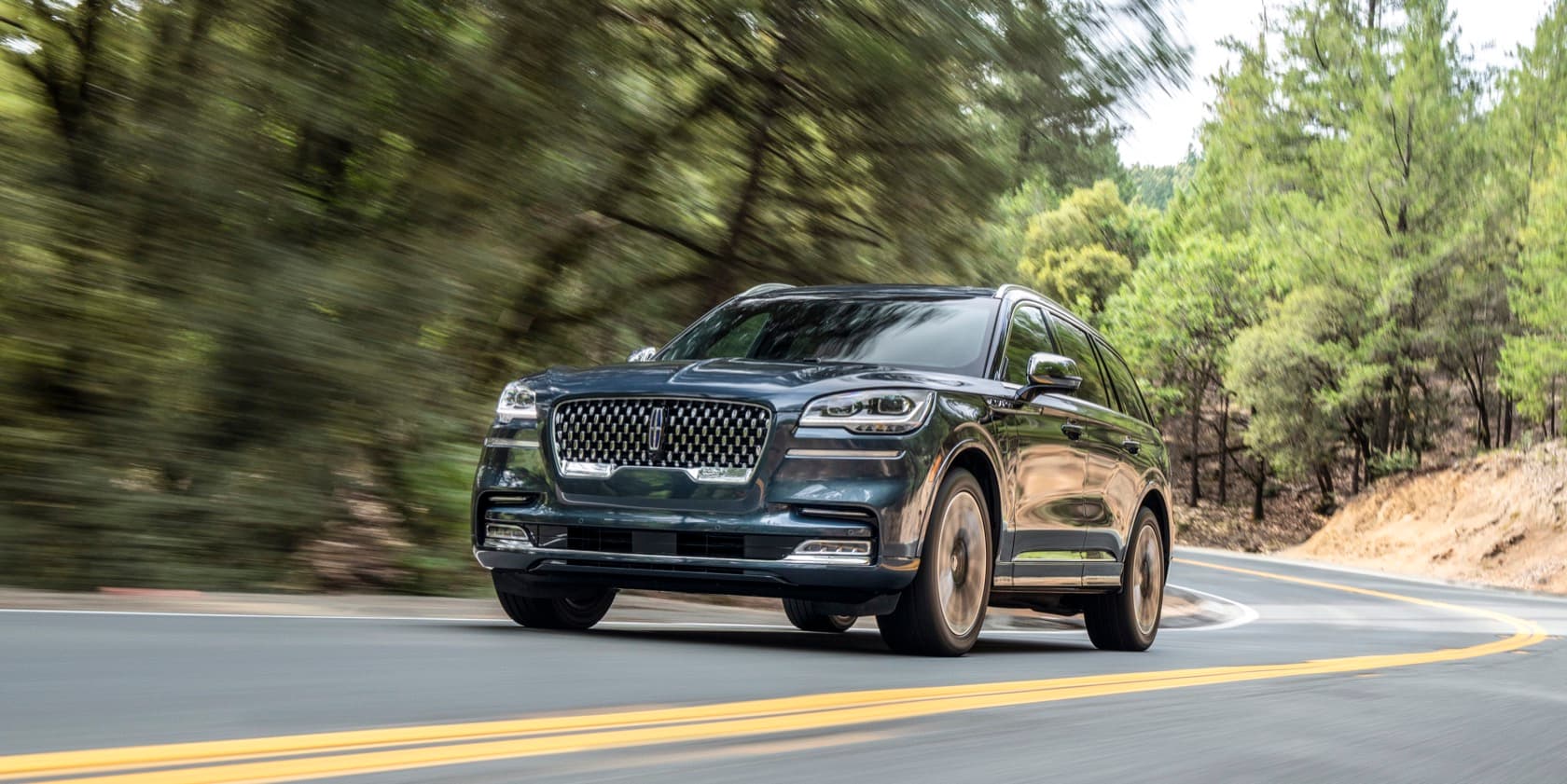 Lincoln keeps the V6 turbo and the 10-speed, as well as the regular car’s AWD setup, but adds to it an electric motor. Total power rises to a more-than-healthy 494 horsepower and a ridiculous 630 lb-ft of torque. The engineers opted to sacrifice gas tank capacity rather than cargo space when accommodating the 13.6 kWh lithium-ion battery, but even with an 18 gallon tank rather than 20.2 gallons, the expectation is that you’ll still get more than 400 miles of total range.

Little of that is electric-only. Indeed, Lincoln says that it only expects around 18 miles of pure EV driving from a full charge, a number that won’t exactly worry a Tesla Model X. Think of it more like Volvo’s XC90 T8: the Aviator uses that electric power to smooth out the V6’s composure, rather than keep it turned off altogether. 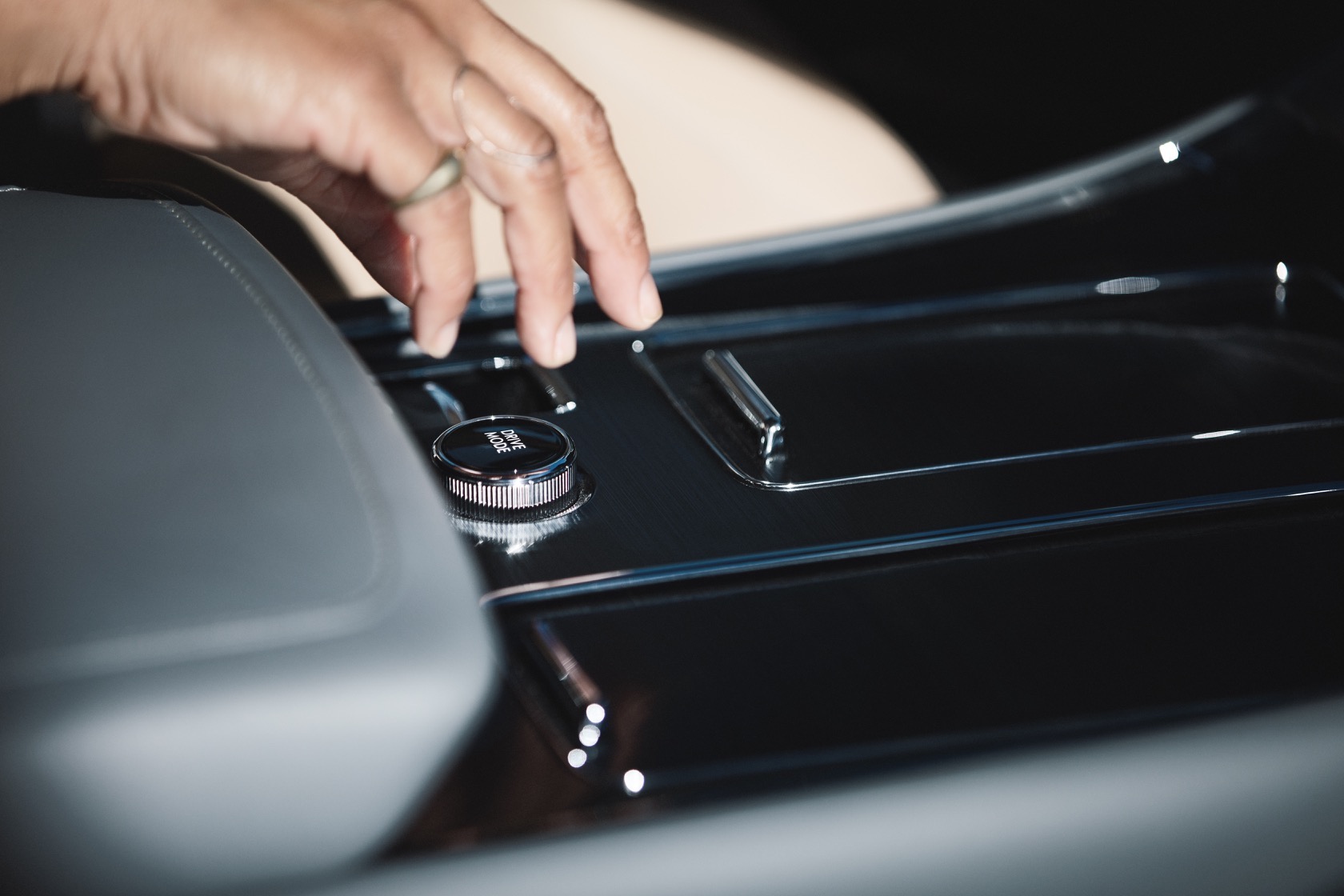 So, while there are more drive modes adding to Lincoln’s already-confusing array of options, the Aviator Grand Touring would really prefer to manage all that itself. It can be tricky, in fact, to control the hybrid balance yourself. There’s a pure-EV mode, true, but sometimes the SUV will just override that and bring the gas engine in anyway.

Entertain the Aviator’s control-freak tendencies, though, and the upshot is a cosseting experience. There’s a welcome surge of power from a standing start, and at just about any speed you can count on the electric motor’s torque to push ahead for overtaking. With a 5,673 pound curb weight – more than 780 pounds on top of the standard Aviator AWD – the driving style isn’t sports car-like, even if the power figures are, but never did it feel unenthusiastic. 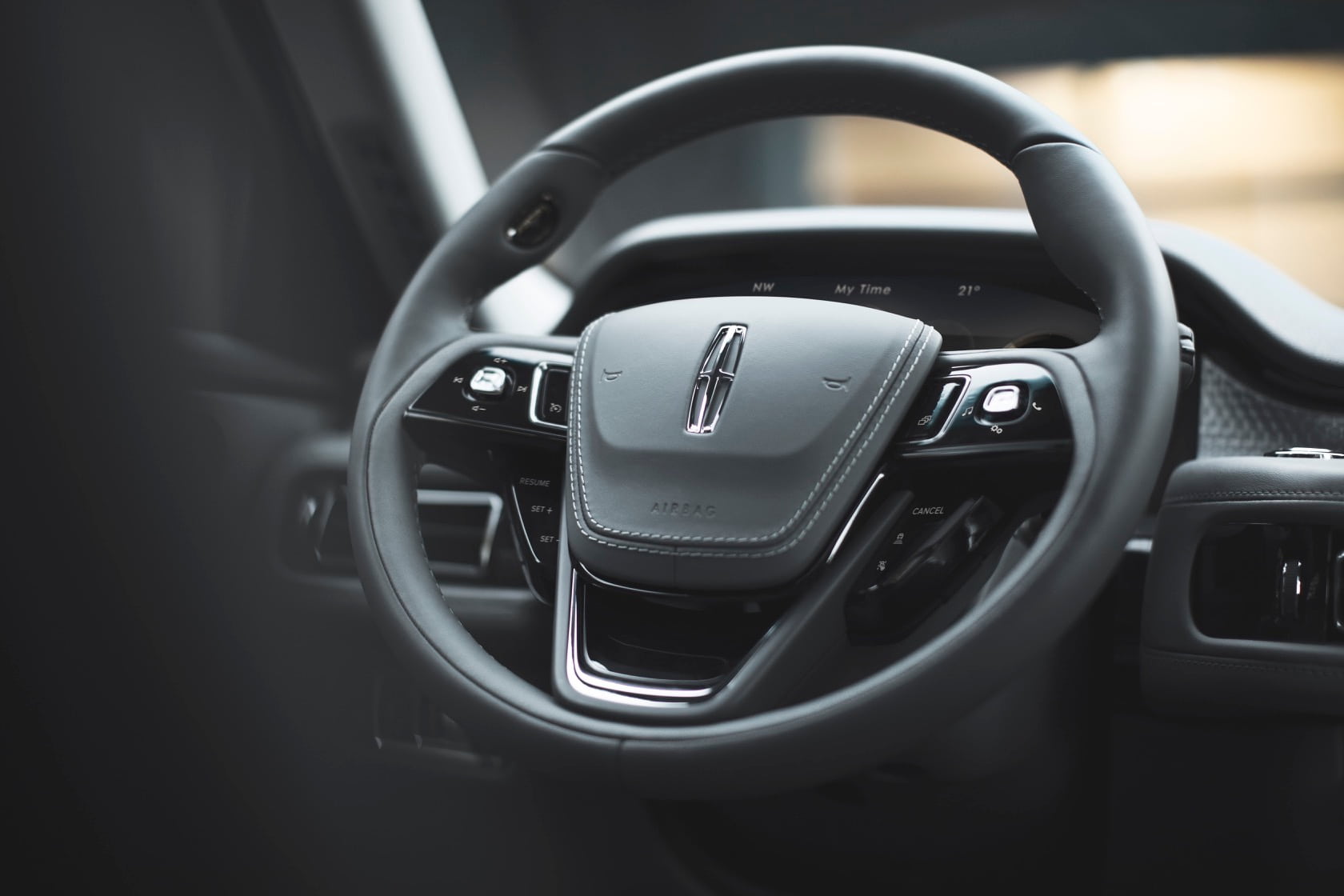 Body roll is managed, though with all that weight it’s clear this is a car designed for comfortable cruising over canyon tomfoolery. Lincoln’s sound deadening is even more successful here, since often the Aviator can downplay – or shut off altogether – the V6 and rely on electric power to make up the difference. Pushed hard, though, some of the same transmission oddities can raise their head, though it’s worth remembering that Lincoln’s team still has time to tweak that before the SUV arrives at dealerships.

With mere weeks in-between my time at their respective wheels, I couldn’t help but think of the new Cadillac XT6 while driving the Aviator. Like the XT6 to the Escalade, Lincoln’s newest SUV is a slightly smaller, slightly more attainable version of its big brother, the Navigator. I think the Aviator does a better job of it, though. 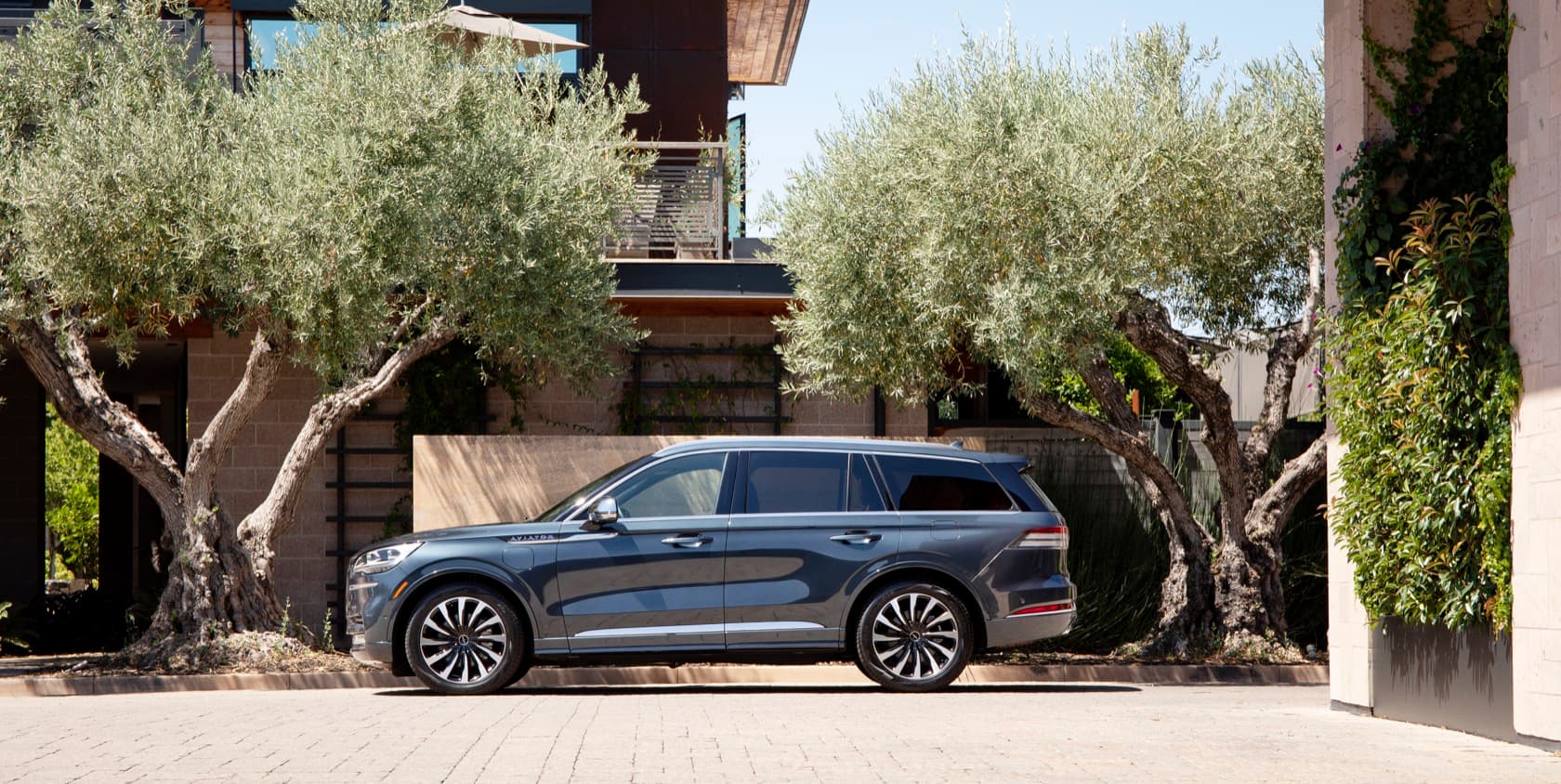 Both have a somewhat nebulous goal of “American luxury,” a flavor that’s as ill-defined as it is ambitious. “Not quite what the Germans are doing” seems like the simplest explanation, as far as I can tell. There, the 2020 Aviator’s bolder palette of materials, more memorable styling inside and out, and capable plug-in hybrid system give it an edge over its Cadillac rival.

The problem, of course, is that it’s not a two-horse race. The 2020 Aviator starts at $51,100 for the Standard, rising to $56,190 for the Aviator Reserve; the comparable Cadillac XT6 or Audi Q7 offer less power for a higher starting price. Opt for a Black Label trim and some of the fancier interiors, mind, and things can quickly spiral up past $80k. 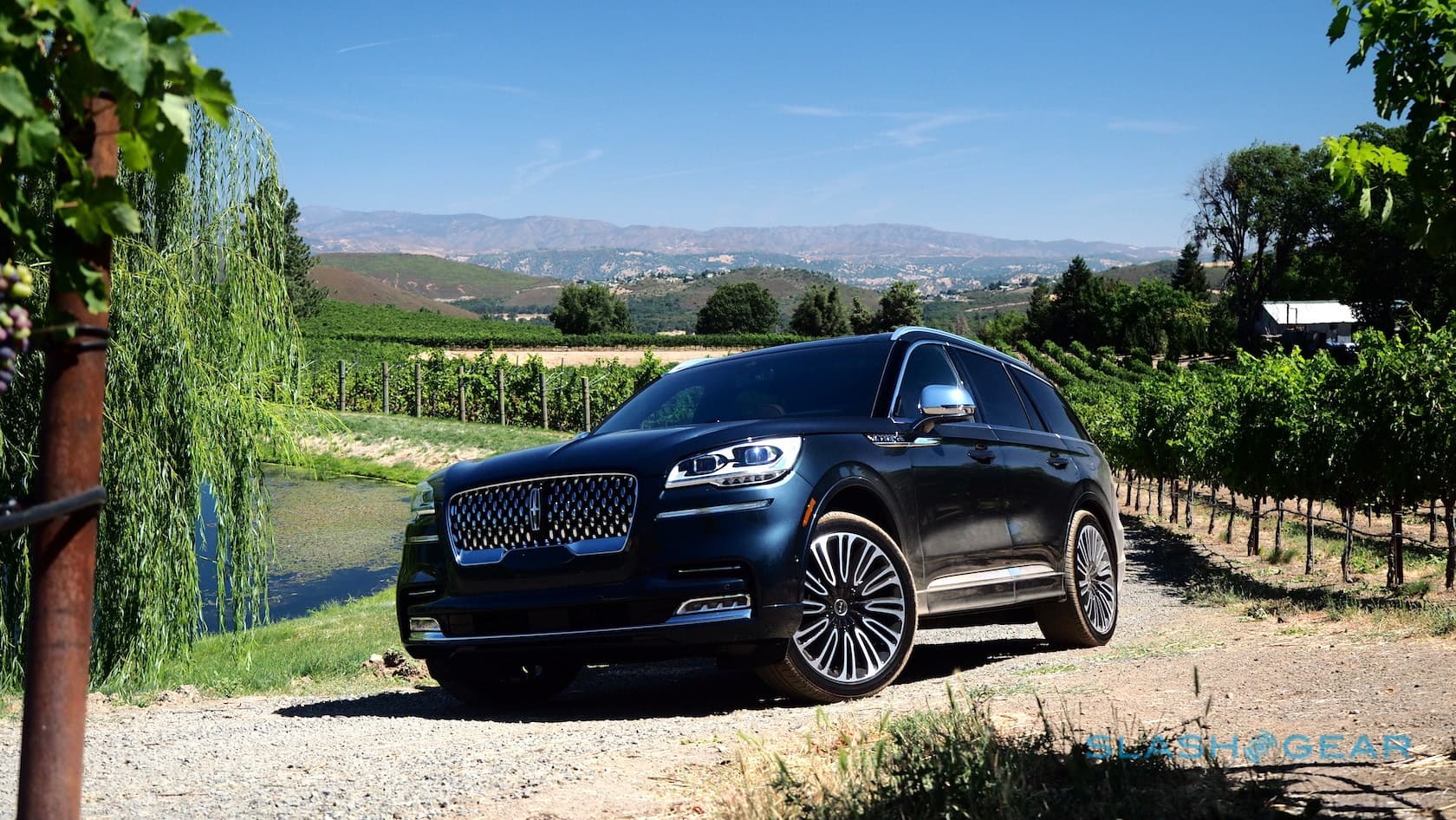 It’s the 2020 Aviator Grand Touring that’s likely to be most controversial. That starts at $68,800, a hefty increase over the regular turbo V6. Add the Dynamic Handling Package for its upgraded ride and you’re looking at more than $84k. The option-heavy Black Label I spent my time in was north of $90k, and at that point you’re in BMW X7 xDrive50i territory.

Has Lincoln done enough to compete in this rarified company? What I like about the new Aviator is how unapologetic it is. There’s no awkward self-deprecation, feigning at being a legitimate alternative to the luxe SUV status-quo while really just being cheaper and diluted with it. You may not like what Lincoln is selling, and this may not be the three-row SUV for you, but it doesn’t second-guess itself along the way. Lincoln has found its groove with the 2020 Aviator, and you can either love it or take your money elsewhere.