Pulling up to the curb at the airport, the 2020 Genesis G90 looks like CGI dropped into real life. Little prepares you for quite how unexpected, how outlandish the new luxury sedan’s styling is, nor how dramatically it cuts through the swathes of regular traffic. This may only be a mid-model refresh for the G90, but it’s the sort of refresh that left LA teens pointing and gawking.

Genesis has had a pretty good 2019, it’s fair to say, with the G70 sports sedan helping push sales up 96-percent so far this year, compared to 2018. While the BMW 3 Series still doesn’t need to worry about being overtaken any time soon, that’s nonetheless impressive for a brand only a few years old.

Things arguably won’t really ignite until the first Genesis SUV arrives; we’ll have to wait until next year to see that. There are Genesis EVs on the horizon, too, though the automaker hasn’t quite decided what its first will be. Before all that is finalized, it’s the chance for the 2020 G90 to carve out a slice of the luxury sedan space. 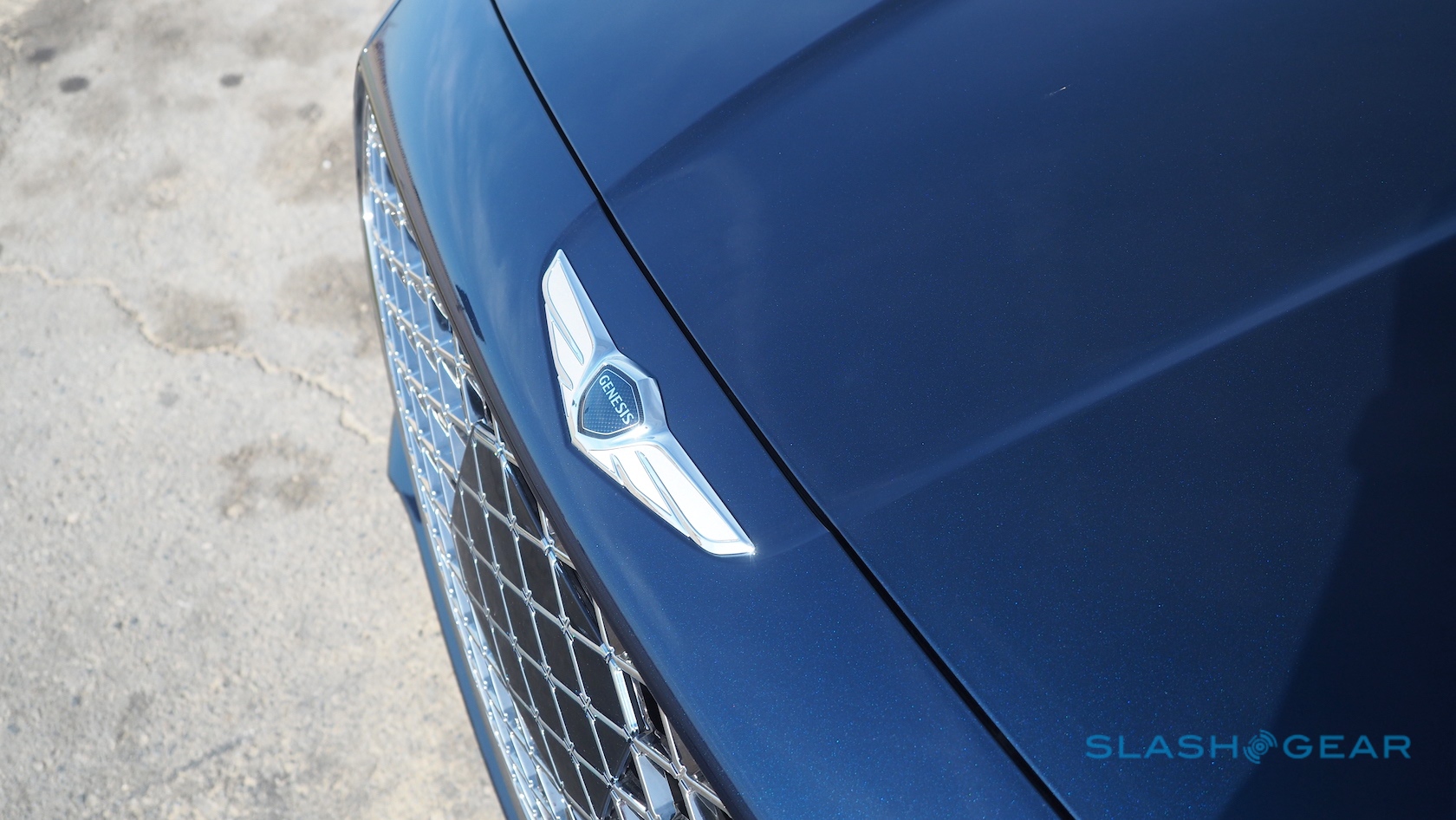 If the old car had a problem, it was grabbing – and holding – attention in a segment dominated by the big three German brands. Handsome, in a “charming but generic man in a pod-coffee commercial” way, it underscored the reality that Hyundai’s luxury division certainly could do flagship smoothness, cosseting, and refinement. Uncontroversial looks just meant that few actually bothered experiencing that.

For this 2020 revamp, then, Genesis’ engineers blew the majority of the budget on the exterior. All the panels, bar the doors and roof, are new; the surfacing is tauter and more confident. At the front, the vast new grille is unapologetic: you may love it or you may hate it, but at least you won’t be apathetic. 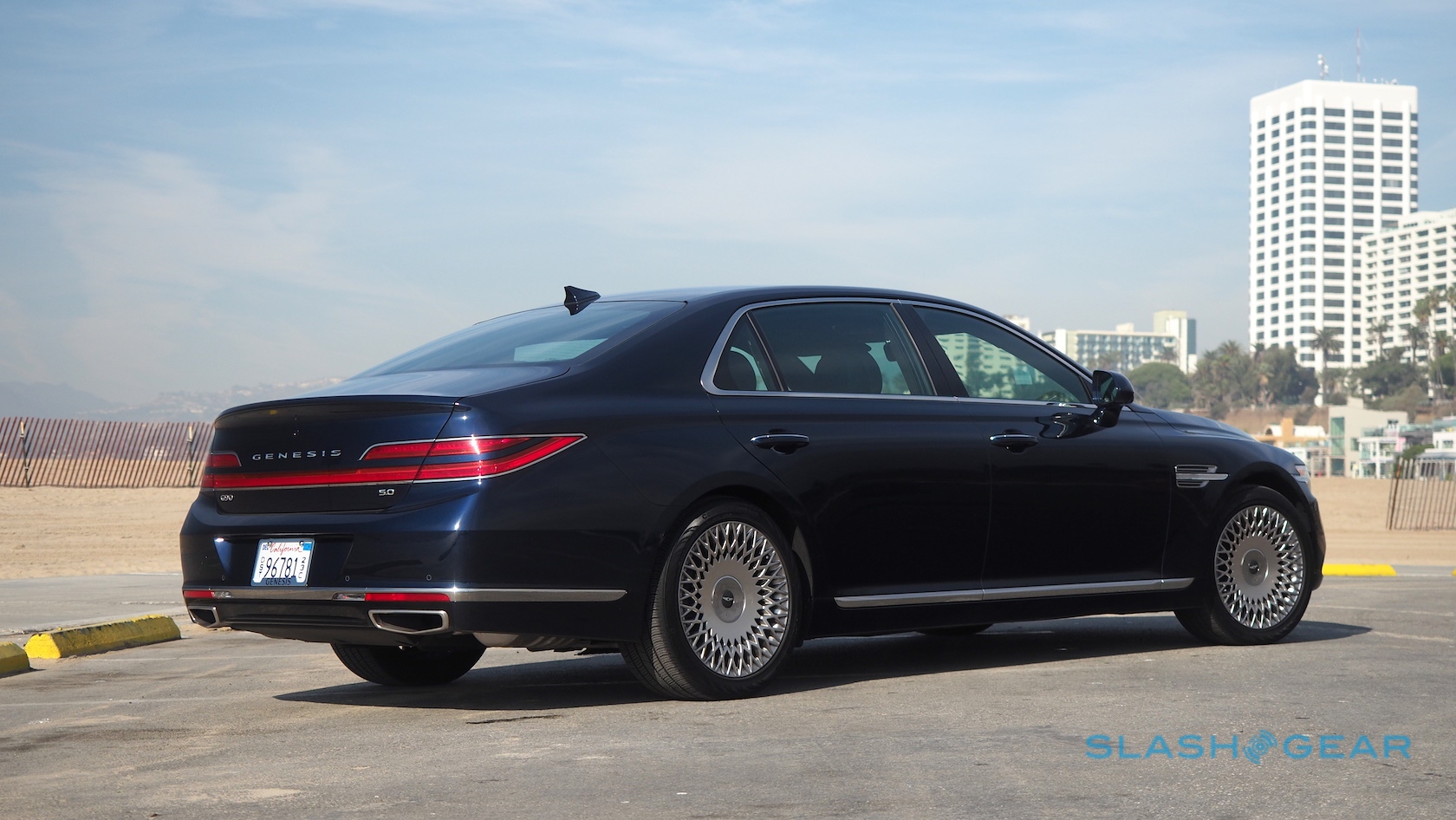 The grille’s diamond mesh pattern is picked up in the crisp new LED headlamps, and then again in the gorgeous dished alloy wheels. Genesis will offer more mainstream versions too, but if you don’t go for the gloriously pseudo-retro 19-inchers you’re a fool and whipping is too good for you. At the back, a trunk-spanning light bar leaves you wondering whether in fact this is the car that should’ve sported the new Lincoln Continental badge.

Inside, things are more familiar. Genesis has switched the glossy wood for open-pore, and there’s generally a little more attention to detail on the finishing – seat stitching that matches the same G-Matrix pattern as the grille, for instance – but for the most part it’s carried over from the old G90. 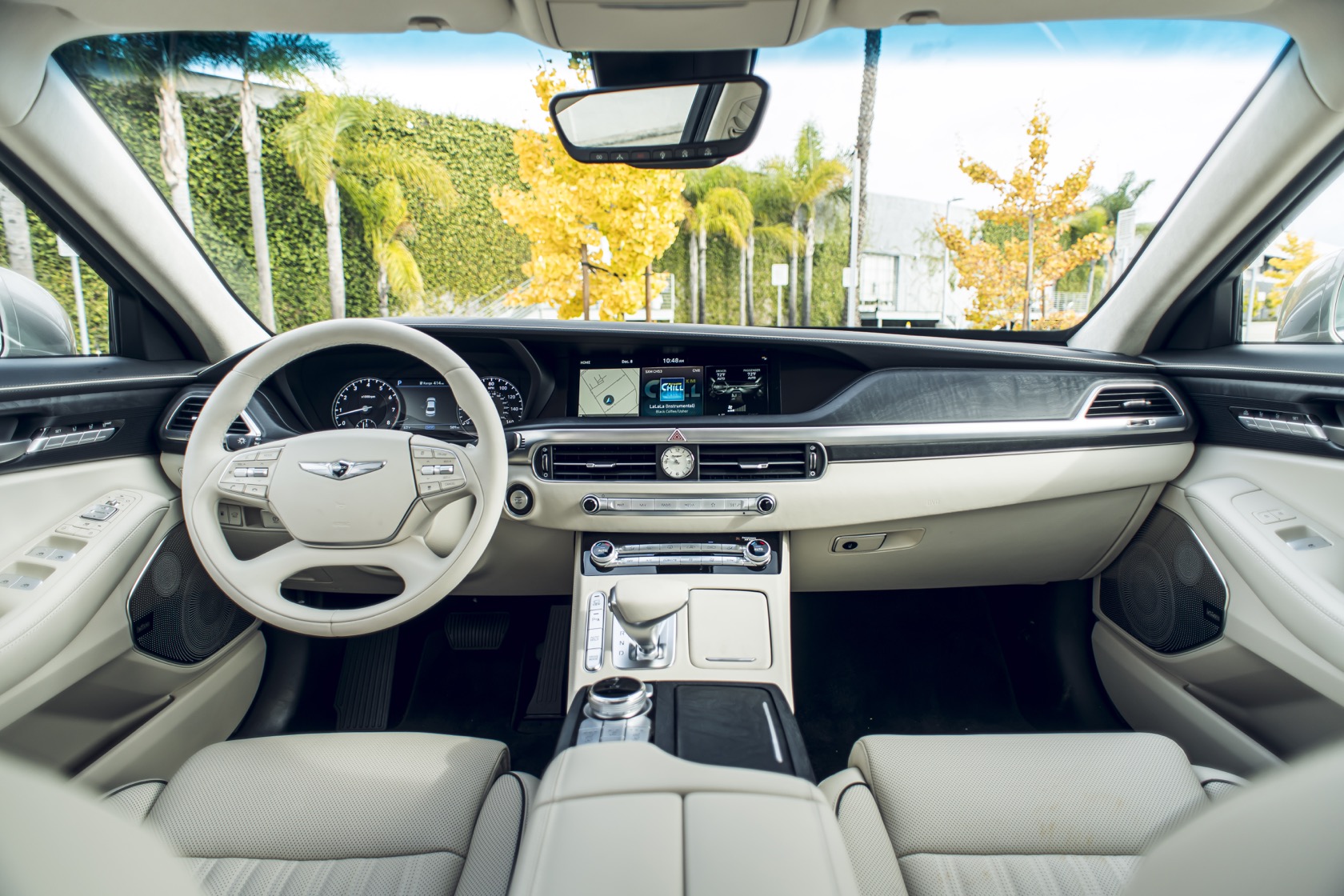 That’s no bad thing, really. With the exception of a few trim pieces it’s all a long way from a Hyundai, with reassuring switchgear and excellent fit & finish. The 12.3-inch touchscreen in the center console is higher resolution than before, though Genesis’ infotainment software isn’t as easy on the eyes as that of Mercedes or BMW. At least it sounds good, courtesy of a 17-speaker Lexicon audio system. 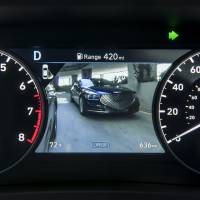 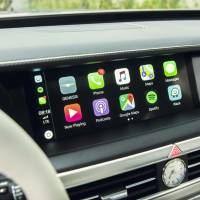 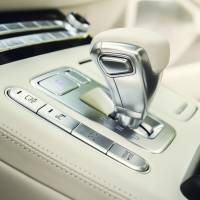 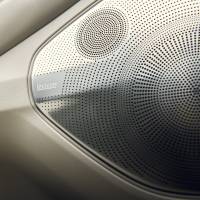 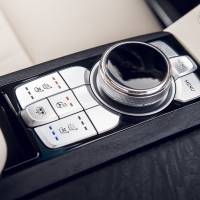 Bells and whistles are in fairly short supply, Genesis erring on the essentials and, for the most part, nailing it. 22-way adjustment for the driver, along with 16-way front passenger seats are standard, each with heating and ventilation, and each finished in soft Nappa leather. Genesis will even calculate the healthiest seat position for the driver based on their height, weight, and inseam, though I still needed to tinker a little with the end result. 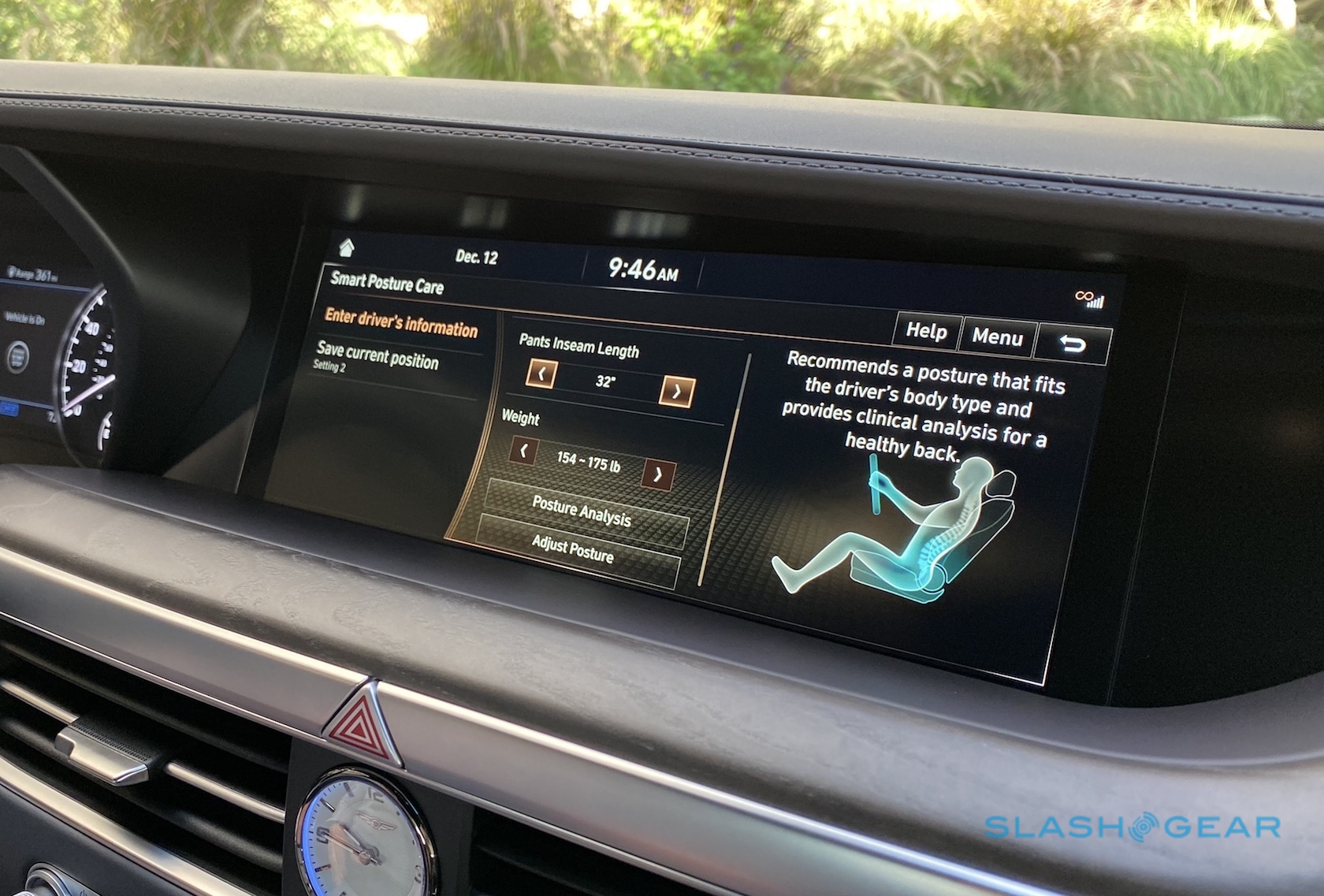 If you’re riding in the back, you probably want the Ultimate trim. That’s when you get two power-adjustable thrones – 14-way on the right, and 12-way on the left – and ventilation to go with the standard heating. Each person gets a 10.3-inch HD display, too, and there are dedicated controls to adjust the HVAC and infotainment. If there’s one thing the G90 isn’t short on, it’s buttons; the cabin is chock-full of them. 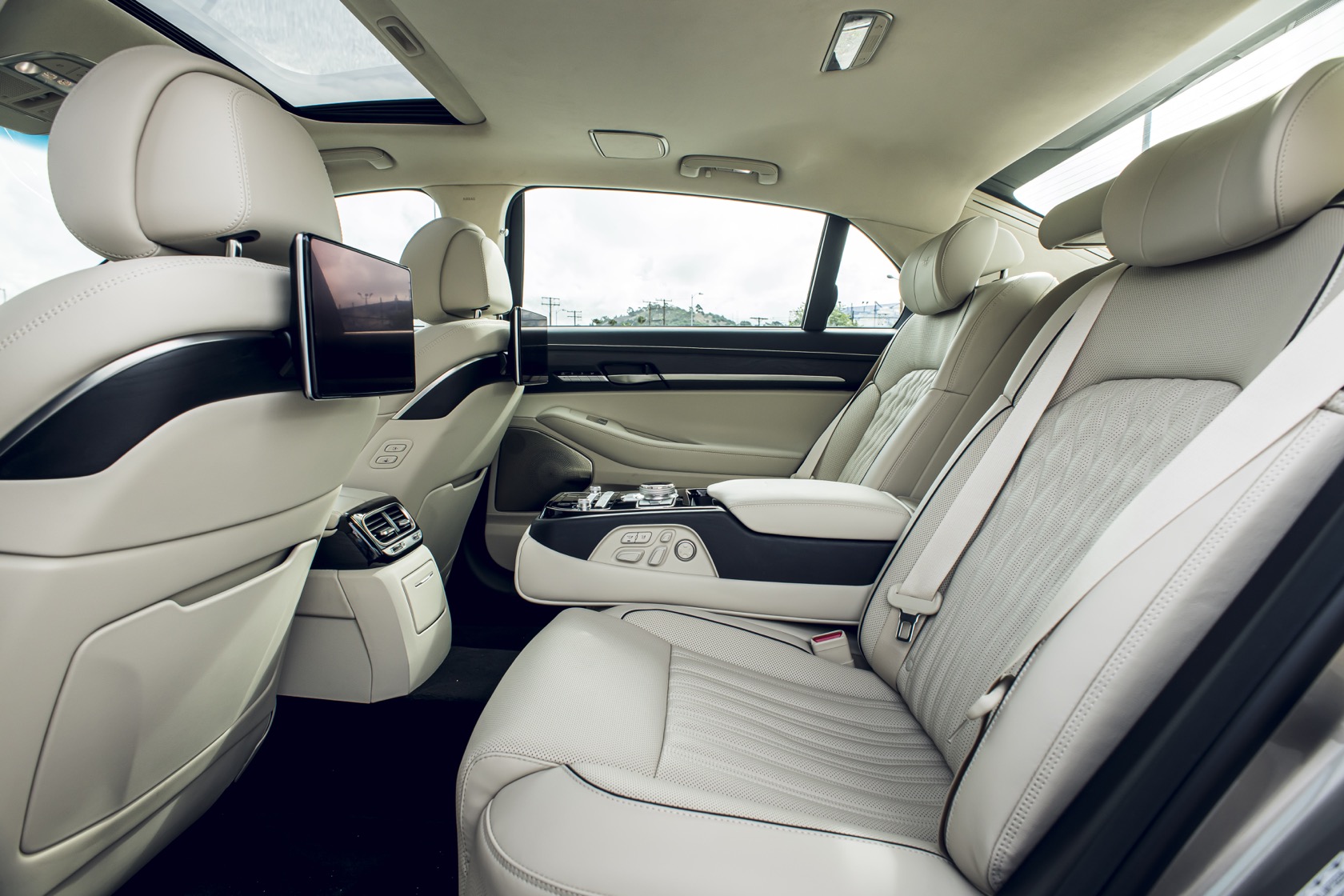 I’ll confess, I was surprised to see the V8 make the cut. Genesis says that 25-percent of G90 buyers opt for the bigger engine, and having driven the RWD version of both drivetrains I can understand why. 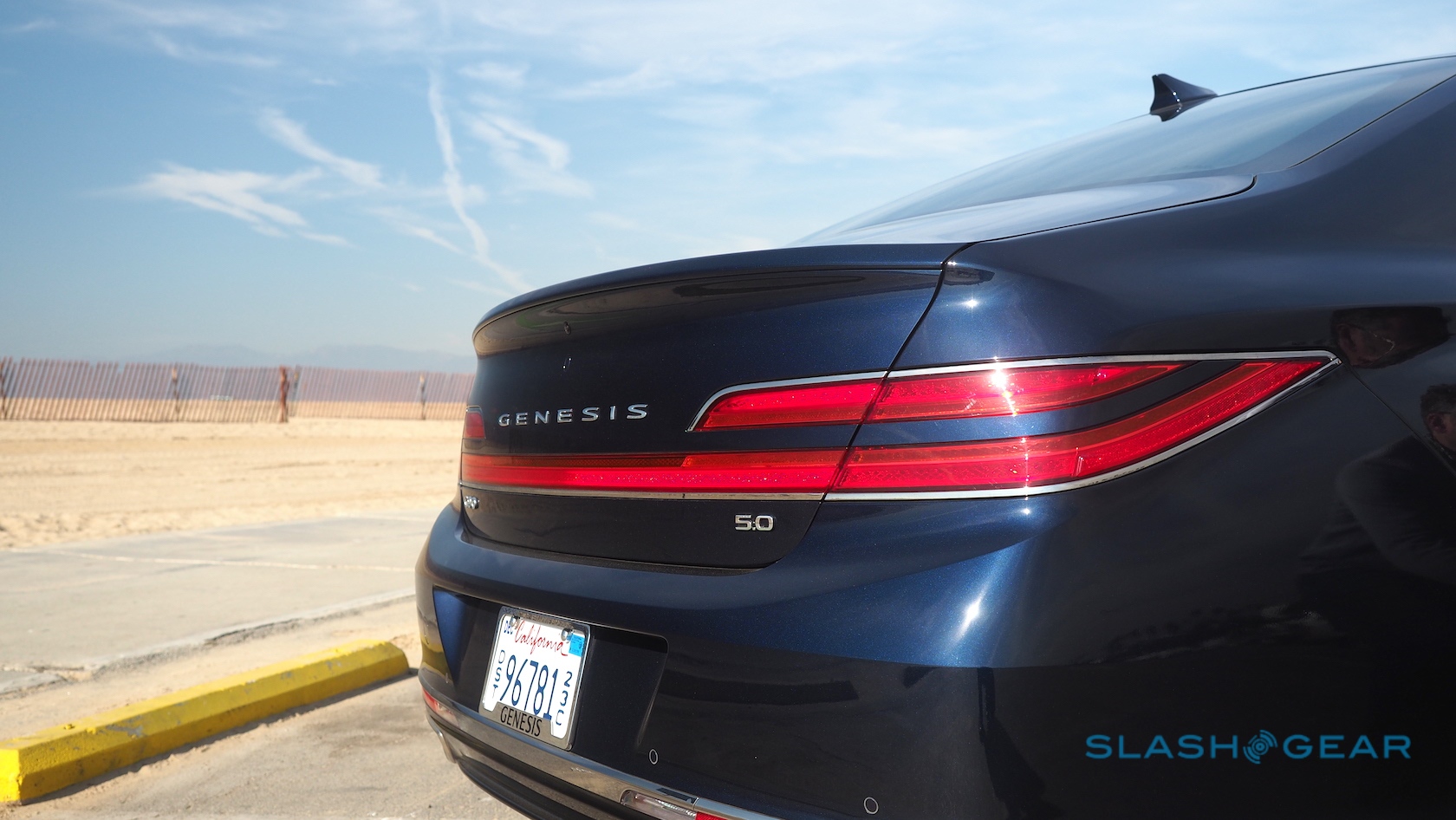 Drive it in isolation and I’m sure the V6’s turbo lag when you put your foot down would be hardly noticeable; heck, you could even argue it might suit the G90’s relaxed attitude to motoring. Things certainly pick up when the turbocharger’s roused, and while no racer the Genesis isn’t a slow-poke, either. Problem is, while the meaty V8 may not have massively more power to play with, it skips the lag.

That gets you surging away from the lights with the right sort of urgency, and translates into a positively surprising eagerness in Sport mode. It lasts until you reach the first corner, where the absence of air suspension makes its presence felt. Adaptive dampers for the coil springs and multilink suspension front and rear make for a ride that’s smooth and composed if you’re equally smooth and composed in your driving. Push harder and the weight can’t be ignored, even if there’s far less wallow than you might expect. 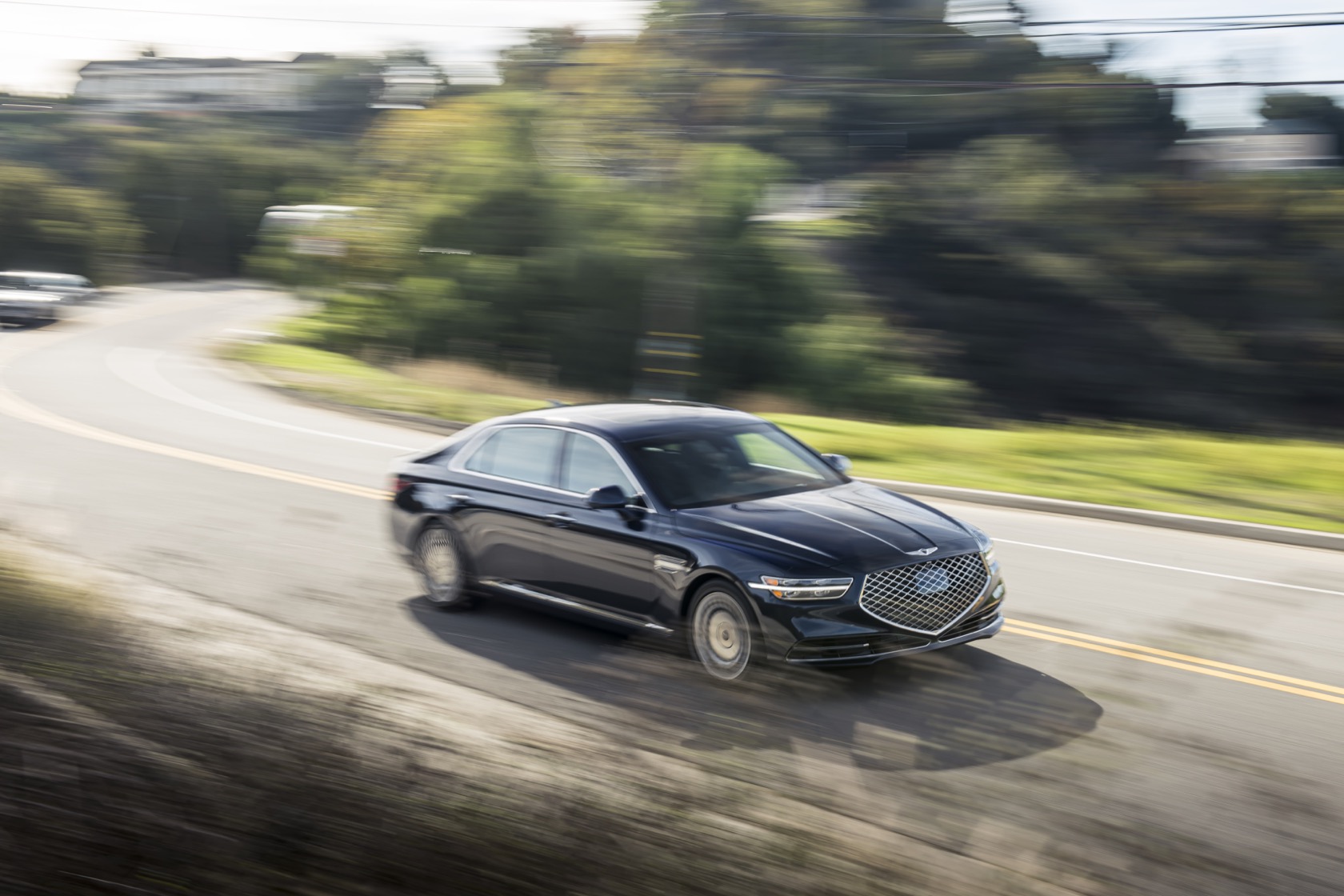 Really, though, with either engine the 2020 G90 makes a strong case as the perfect road-trip car. It’s astonishingly quiet, and the unruffled ride across LA’s hardly-exemplary asphalt is a testament to how well Genesis’ engineers got the suspension and damping right. The active safety tech has been heaped on, too, with standard blind-spot warnings, a camera feed from the side of the car as you change lanes, front collision avoidance and rear cross traffic avoidance, a 360-degree camera, driver attention warnings, and safe exit assist to warn you if you’re about to throw open the door into traffic.

Genesis’ adaptive cruise control gets upgraded to Highway Driving Assist, with lane-centering and automatic speed limit adjustment added to the usual features. It’s still a hands-on-the-wheel system, but the G90 will allow you to go for far longer stretches without touching the helm than most other cars I’ve tried. Unlike the systems in recent S-Class and 7 Series cars, you don’t get extras like auto-lane-changing. 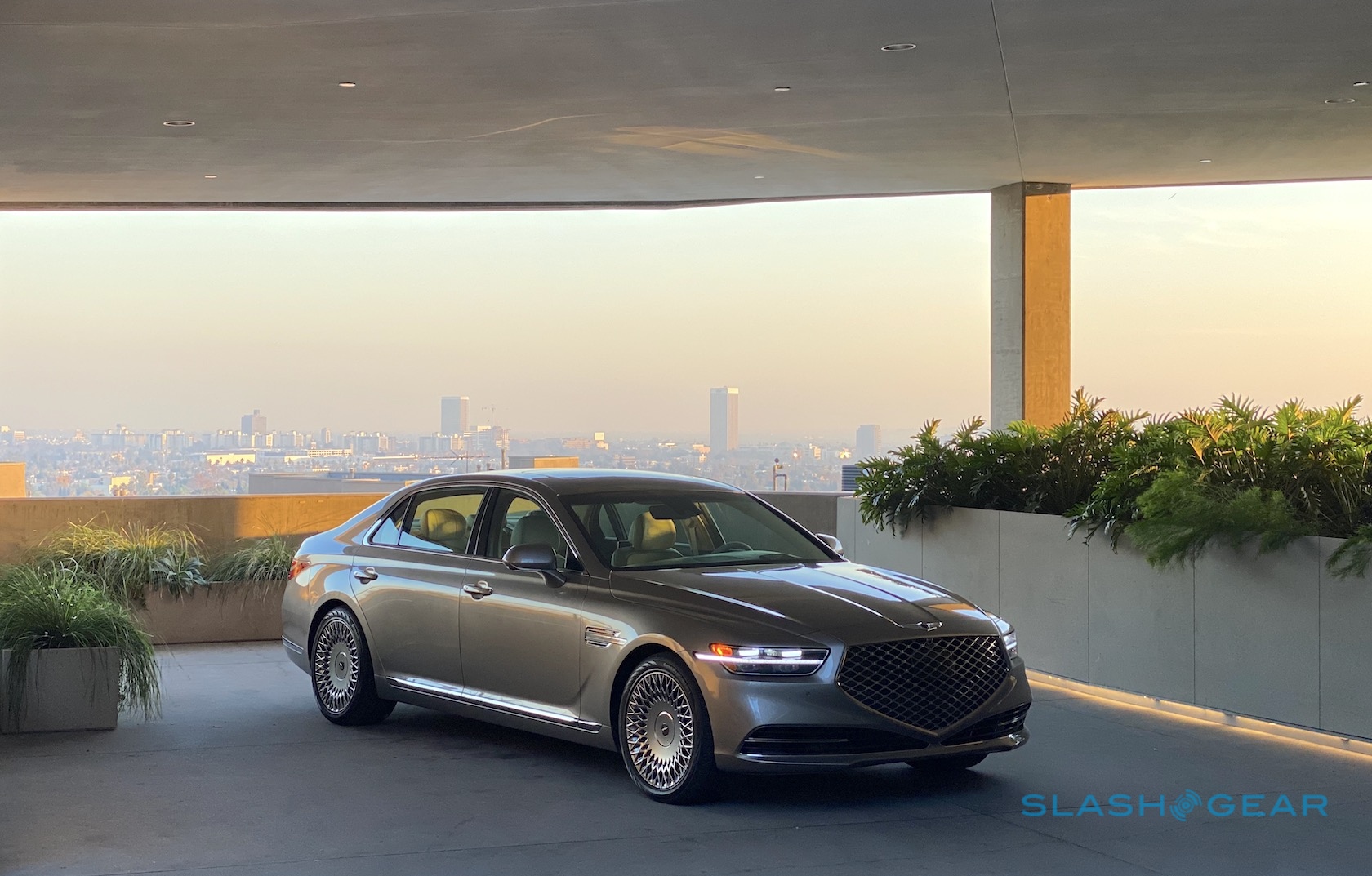 It’s worth remembering that you pay handsomely for those extras, something the G90’s value play highlights well. Final pricing for the 2020 car hasn’t been confirmed, but we can expect similar numbers to its predecessor: figure on around $71,000 for the 3.3T Premium and around $75,000 for the 5.0 Ultimate, with AWD around $2,500 more on each. That’s a five-figure difference from what BMW and Mercedes are asking, before you start trying to level out the trims with Genesis’ ample standard kit.

The irony, of course, is that you could’ve said much the same thing – and made mostly the same arguments – for the pre-refresh G90. Genesis’ problem has never been one of value, only interest. Love the exterior redesign or hate it, either way attention will no longer be in short supply.