Heritage can be a lodestar or it can be a crippling anchor holding you back, and few cars illustrate that quite so well as the Corvette. America’s homegrown sports car star has the history, sure, but it’s fair to say that in its last few generations it’s felt more “quarterback gone to seed” than all-out contender. The 2020 Corvette Stingray changes that.

Chevrolet didn’t set itself a small challenge there, either. Mid-engined for the first time, more capable of directly competing with the Porsche 911 that Corvette fans always used to say their car rivaled, and to which the rest of us politely nodded and smiled and hoped they’d change the subject. It couldn’t just be a big engine and a comparatively small price any more. 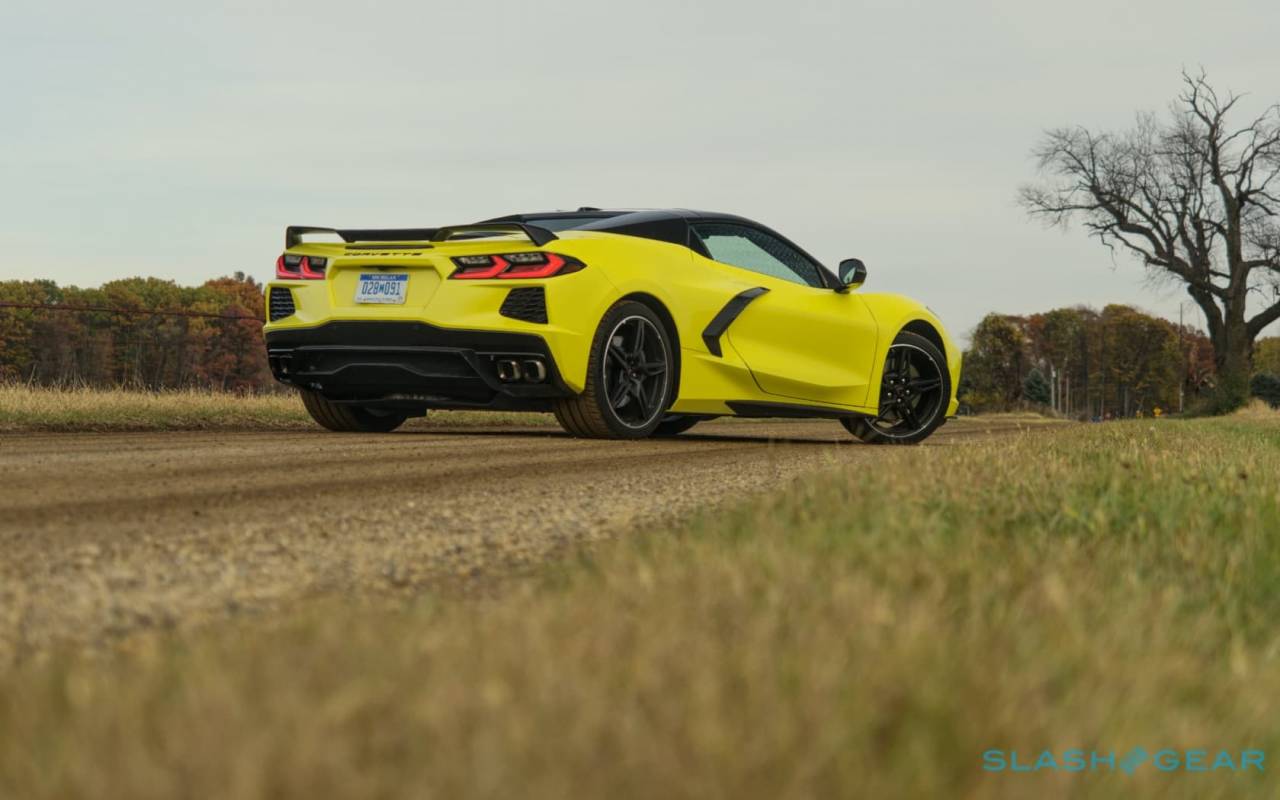 The result is a performance car that feels shaped by both demands for speed and practicality; built to a price and with hints of racing game and “show it off in the parking lot” whiz-bang gimmickry. Cold, hard pragmatism butting up against that omnipresent recognition that a Corvette has to feel like a Corvette else, really, what’s the point?

That’s a lot of directions to be pulled in, and it could’ve left the Corvette C8 a deep disappointment. The fact that it isn’t, well, that’s something of a surprise. 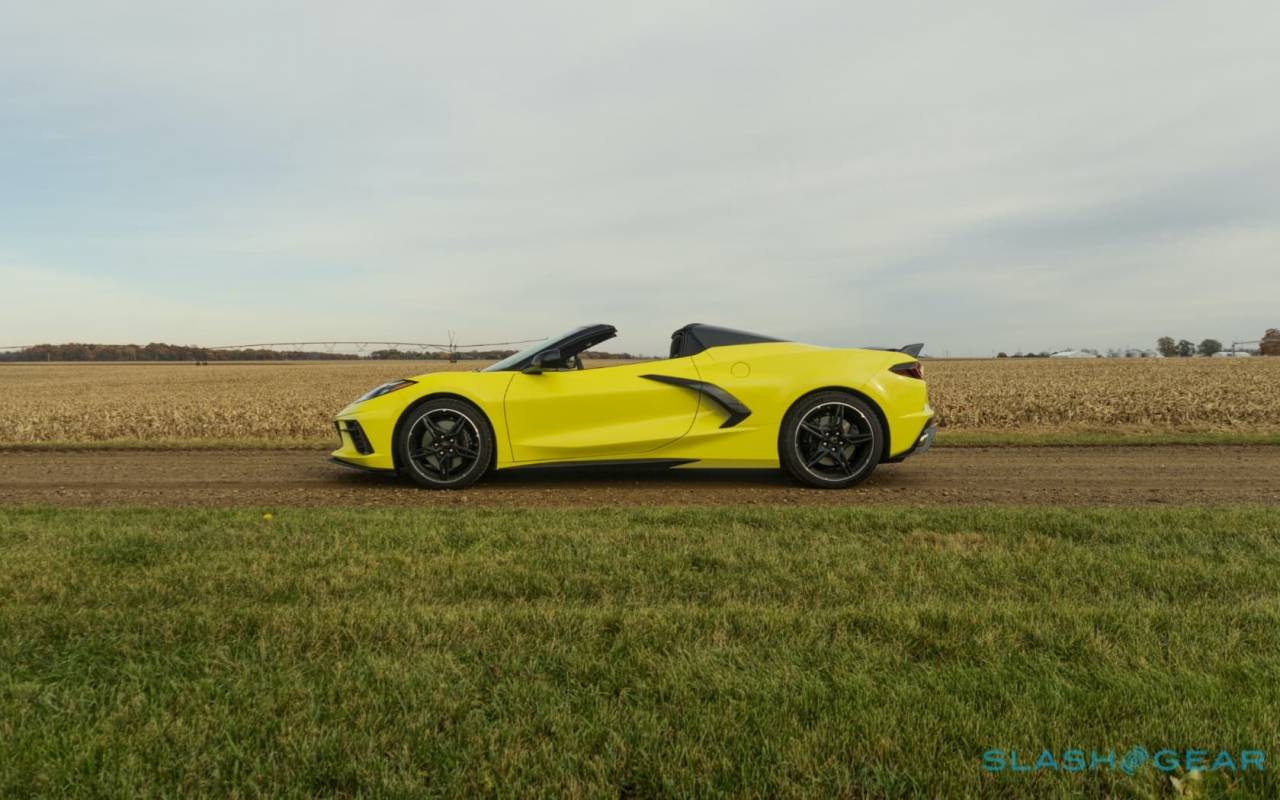 Style-wise, it’s one of those cars which is far more successful in person than on the screen. Sure, it feels like Chevrolet’s designers have spread their inspiration net wide, and there are some angles where the C8 is a little ungainly. The rear decklid is particularly exaggerated – though in this convertible form it hides a trick folding metal roof as well as a fairly sizable trunk – while the vents just aft of the doors look more ungainly the longer you look at them and the rear is somewhat busy. I wouldn’t have chosen “Accelerate Yellow” paint, either; the Corvette doesn’t need to do quite so much work to stand out. 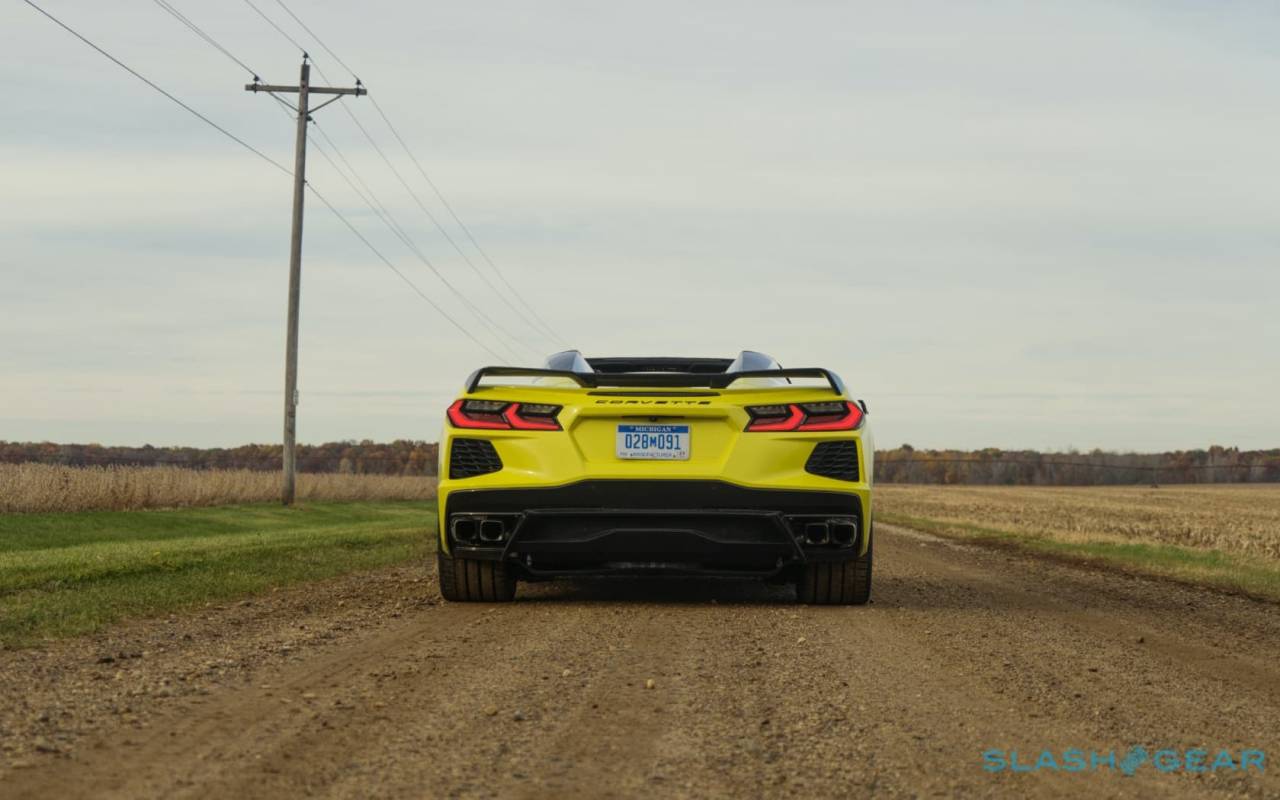 Pricing kicks off at $66,400 (plus $1,095 destination) for the drop-top, though it’s hard to imagine most C8 buyers stopping there. The standard car isn’t poorly equipped, but the $11,450 3LT package upgrades the infotainment, adds a Bose audio system, a head-up display, GT2 bucket seats with heating, ventilation, and power bolsters, the Performance Data Recorder that now captures both 1080p footage from the track and everyday video of your trip to Costco. It also throws in a front curb-view camera – its view summoned with a mercifully easy to locate button – and must-haves like blind spot warnings and rear cross traffic alerts. 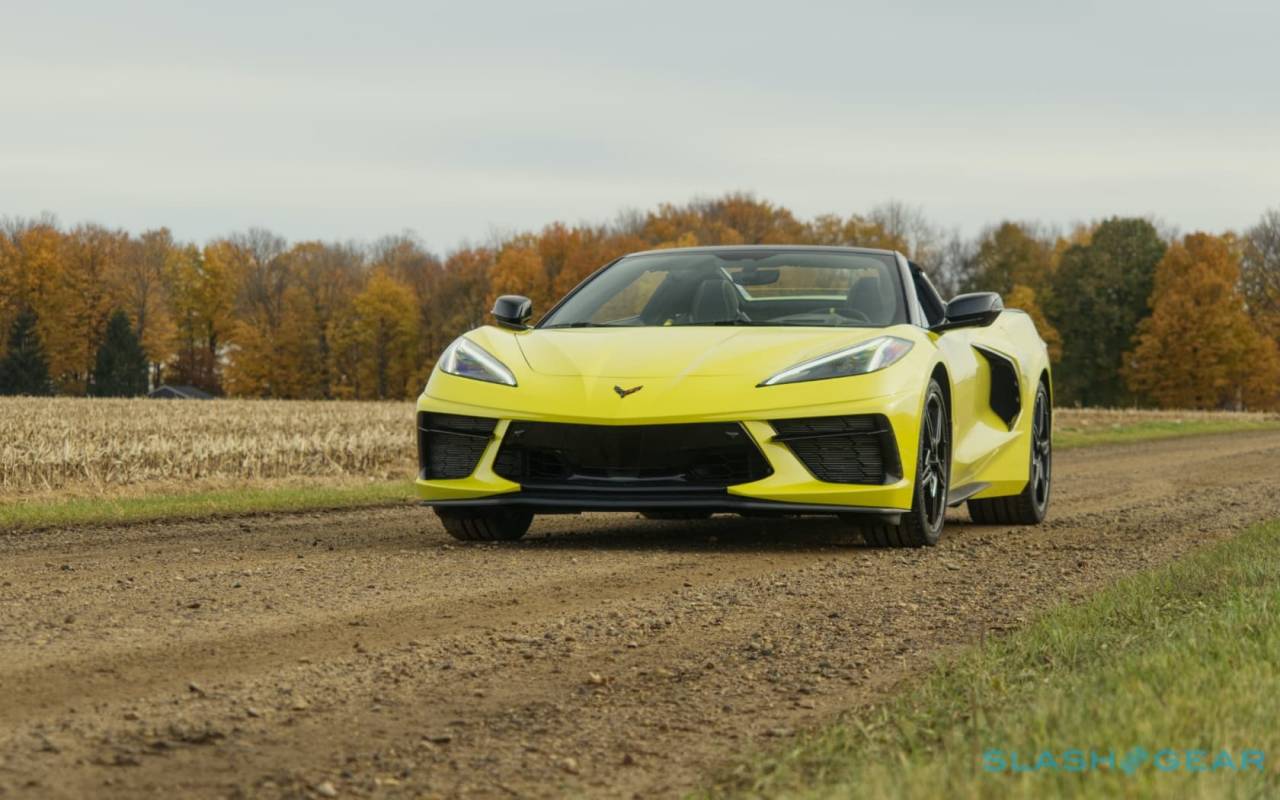 I say “must haves” because rear visibility is fairly dire, and side visibility isn’t all that grand either. The rear spoiler that comes as part of the $5,000 Z51 Performance Package doesn’t help with sight-lines but it sure looks good. The rest of the package is more focused on speed, with special suspension, brakes, an electronic limited slip differential, high-performance tires, a special exhaust and rear axle ratio, and a heavy-duty cooling system. 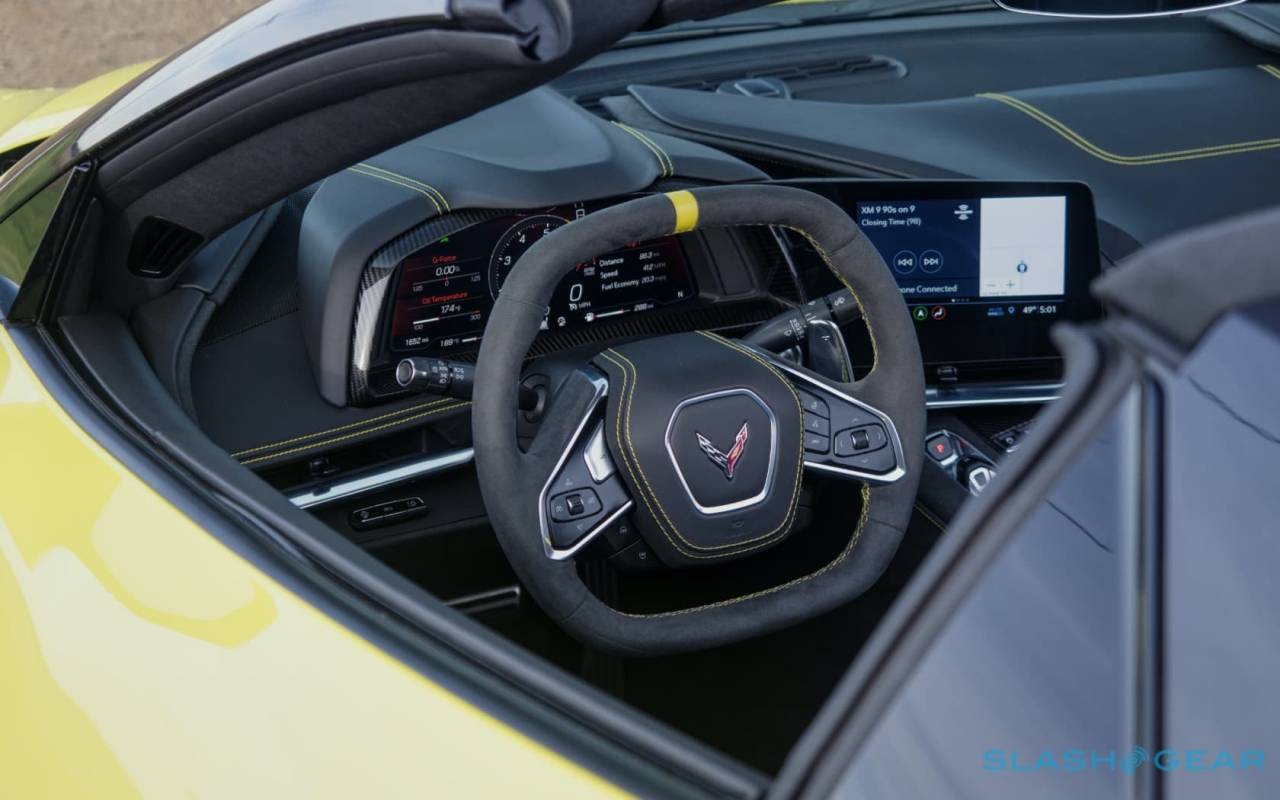 $1,895 adds Magnetic Ride Control, and it’s an option every Corvette buyer should check off. Chevrolet’s trick dampers can adjust the viscosity of the fluid inside, crisping things up for coccyx-punishing firmness or mellowing out for long-distance cruising. It’s suspension witchcraft and more than worth the money, as is the $1,495 front lift system which can either be triggered manually or programmed to automatically raise the nose for the same tricky incline every time.

What every Corvette Stingray has at the moment is the same LT2 6.2-liter V8 engine, good for 490 horsepower and 465 lb-ft of torque. The Z51 package nudges those up to 495 hp and 470 lb-ft, and trims the 0-60 mph time to 2.9 seconds. There’s no manual option – that’s part of Chevy’s aforementioned pragmatism, blaming traditionally low sales of stick shifts even if purists say they’re non-negotiable – only an eight-speed dual-clutch automatic with paddle shifters. 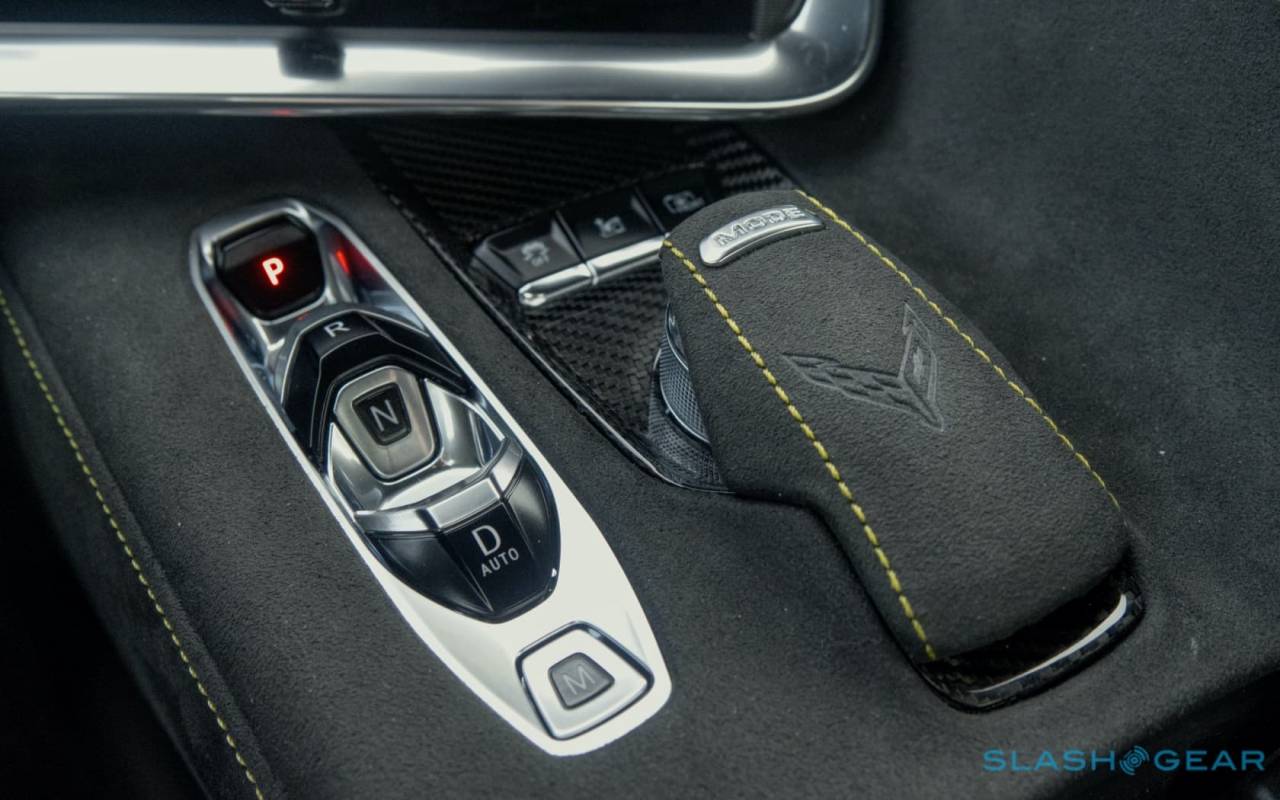 The engine’s in the middle, and it’s the rear wheels that are driven. There’s been plenty of chatter about AWD and hybrid options, but for the moment the C8 is keeping things simple. Simple and effective, mind.

It goes fast, of course. In a straight line, the Stingray leaps ahead like a beast scalded, monstrously quick and with a soundtrack to match. I’m not typically a convertible fan, but the drop-top C8 allows you to lower the rear glass window independently, letting in more of the V8 howl. 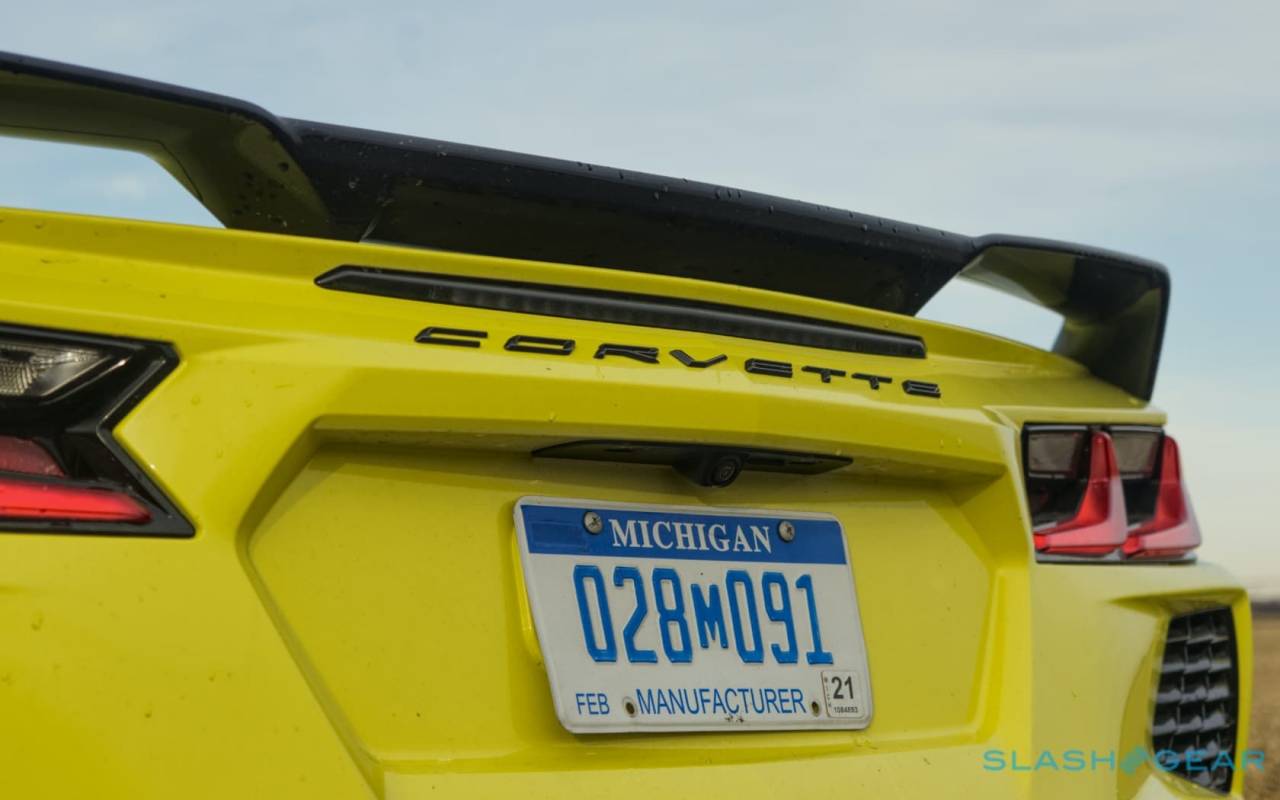 Six drive modes span inclement weather through to full-on track use, and there are all manner of traction settings to tinker with if you dig through the menus. The sluggish drive mode dial isn’t really set up for fast spinning through to take advantage of an unexpectedly rewarding road, mind; better to stab the “Z” button on the wheel, which you can preconfigure with your pick of the settings.

Speaking of the wheel, Chevrolet’s decision to fit a weirdly rectangular one with droopy-jowl spokes feels like another of those misguided gaming-inspired decisions. It’s thick-rimmed and – in 3LT form – heated, while $595 gives it a sueded microfiber wrap that’s going to one day be a time capsule of every greasy palm that gripped it. Does the shape help? Probably not. 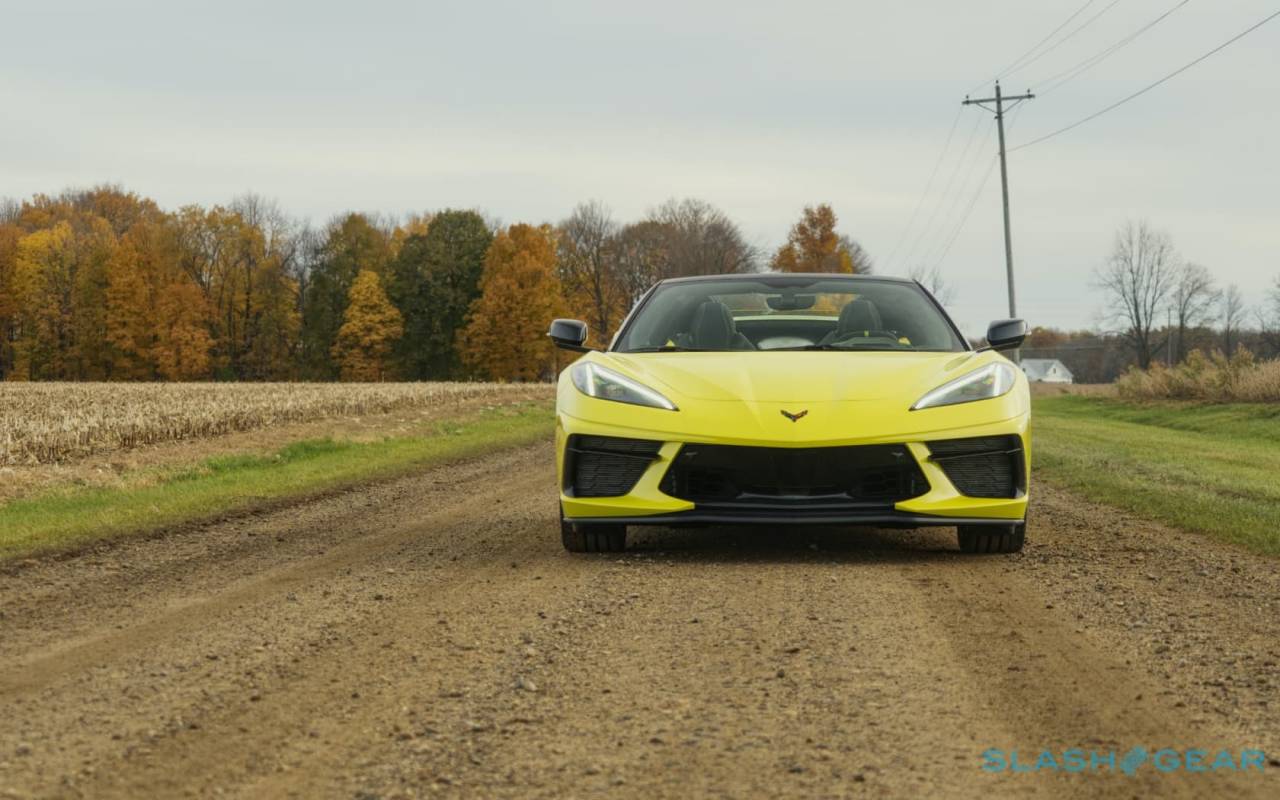 The Corvette C8 does, at least, respond well to it. Indeed cornering is one of the Chevy’s key charms, even with some sensible understeer dialed in from the factory. There’s a predictable linearity to it, combined with a sharpness of turn-in that leaves things feeling just plain playful. Factor in ridiculous levels of grip and little in the way of body roll, and it becomes abundantly clear that this thing was tuned for fun.

The same can be said for the gearbox. Sure, it’s a little lacking in slush at low speeds, but I’ll stomach the jerkiness there in return for the snappy response to the paddles (or, if you’re feeling lazy, eager willingness to downshift when you push on in auto mode). Switch to Tour, meanwhile, and the engine/transmission/dampers combo is unexpectedly refined. This needn’t be just your weekend plaything. 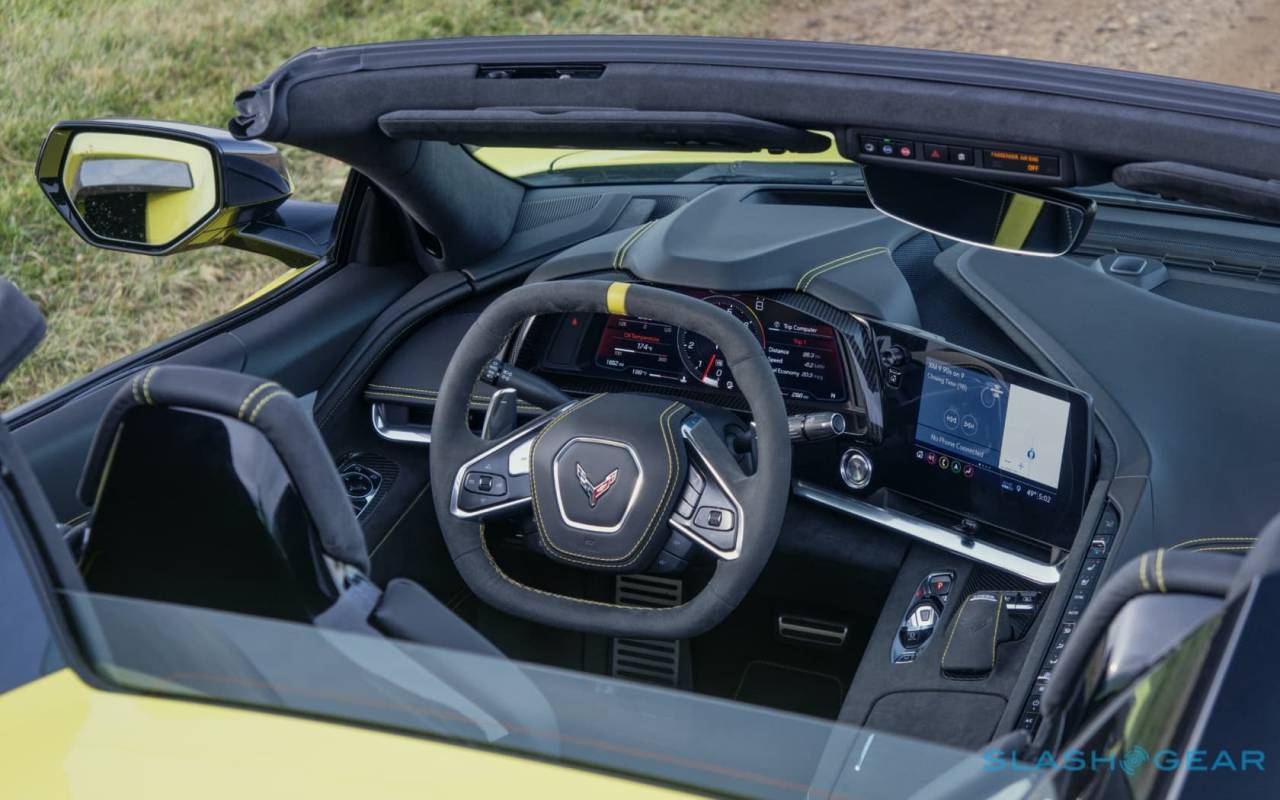 There’s room for two inside, though things feel snug. Part of that is pure dimensions, and part of that is Chevrolet’s packaging. The high center console – particularly the long ski-slope of HVAC buttons cascading confusingly down between driver and passenger – could easily leave larger occupants feeling claustrophobic. 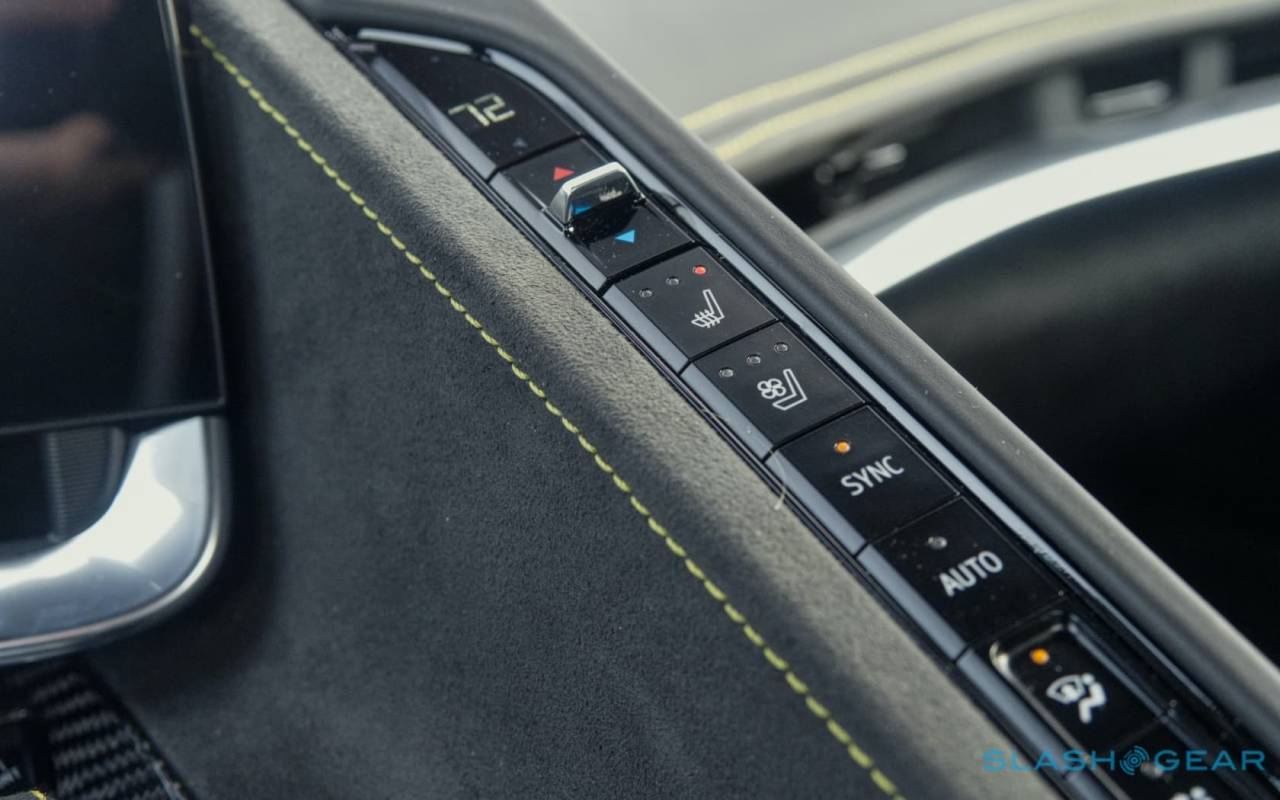 All C8’s get an 8-inch infotainment touchscreen within easy reach, and a 12-inch driver display with different gauge displays depending on which mode you’re in. It feels, frankly, light years ahead of the old Corvette, though you’ll need the 2021 model year car to get wireless Apple CarPlay and Android Auto, rather than their wired counterparts. 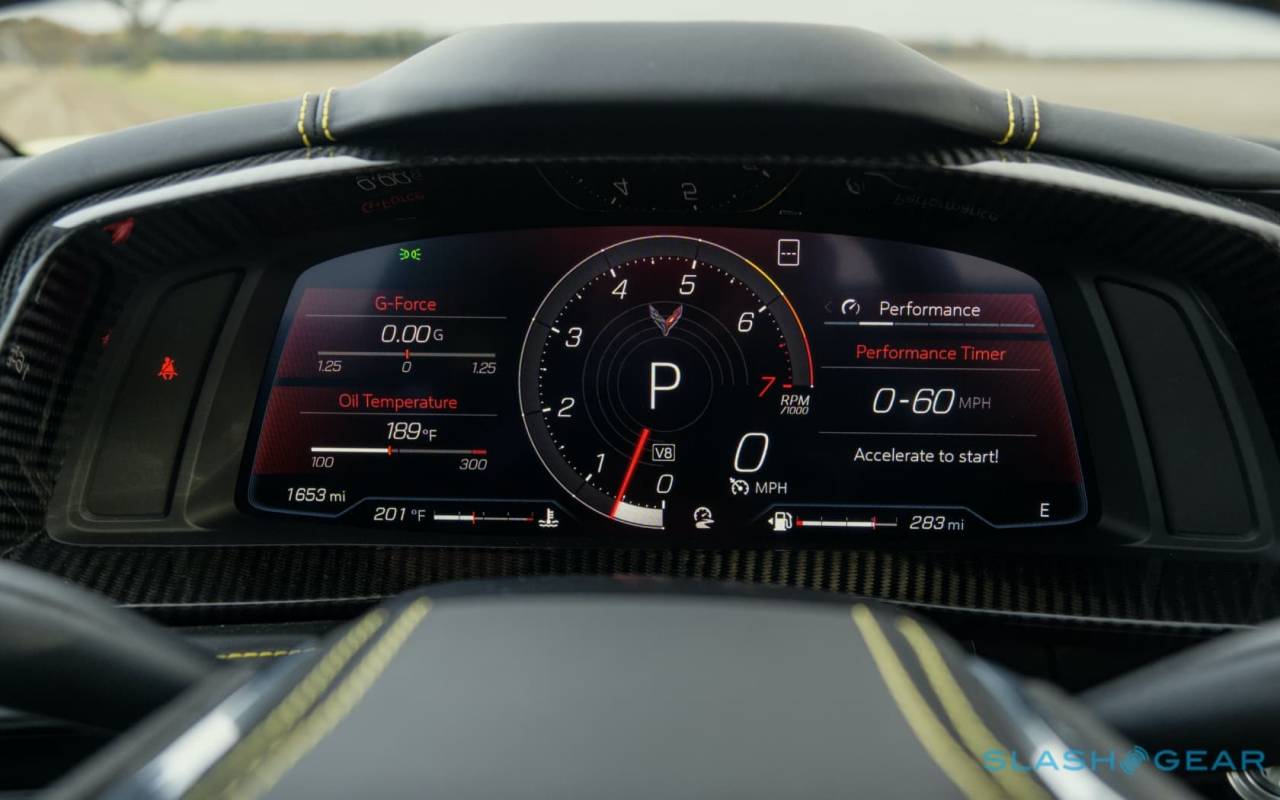 What stands out, though, is just how much the C8 feels focused on the pleasure of actually driving. For all the new platform, and the fancier tech, and the slick hard-top convertible roof, that 6.2-liter V8 is the star here. When you’re cruising, it’s burbling happily; push harder, and it serenades you like only an eight-cylinder can, while still delivering the urgency that rivals have turned to smaller, turbocharged engines to deliver.

It’s fun that’s contagious, too. Few cars I’ve been in recently have turned so many heads, and prompted so many questions, as the Corvette C8. People love this car, and it feels like everyone has a ‘Vette story of their own to share in turn. 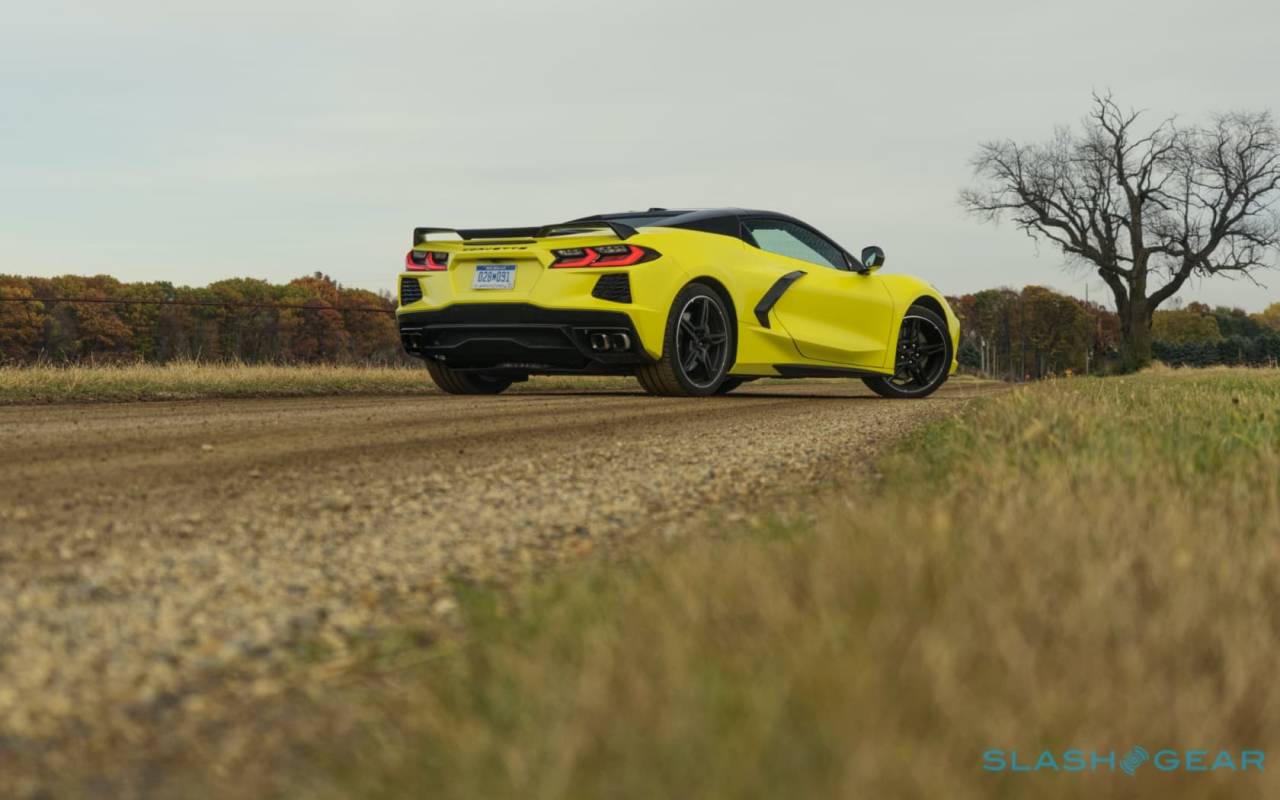 Factor in time for those conversations, then, and for being more watchful than you might expect in a modern vehicle. Chevy doesn’t offer adaptive cruise control, nor lane-keeping assistance, and there’s no automatic emergency braking. Rear cross-traffic alerts were added for the MY21 C8.

Not having grown up in the US, sometimes the charms of Americana are lost on me. The old Corvette was a good example of that: I knew people loved it, I just could never quite figure out why. The good news is the Corvette C8 isn’t just playing to the home crowd.

Maybe it’s the personality it brings to the table, or the usability. Some sports cars leave you wary of their power or temperament, but like anything with a Chevrolet badge on the hood, the Corvette doesn’t demand blood sacrifice in order to get the job done. 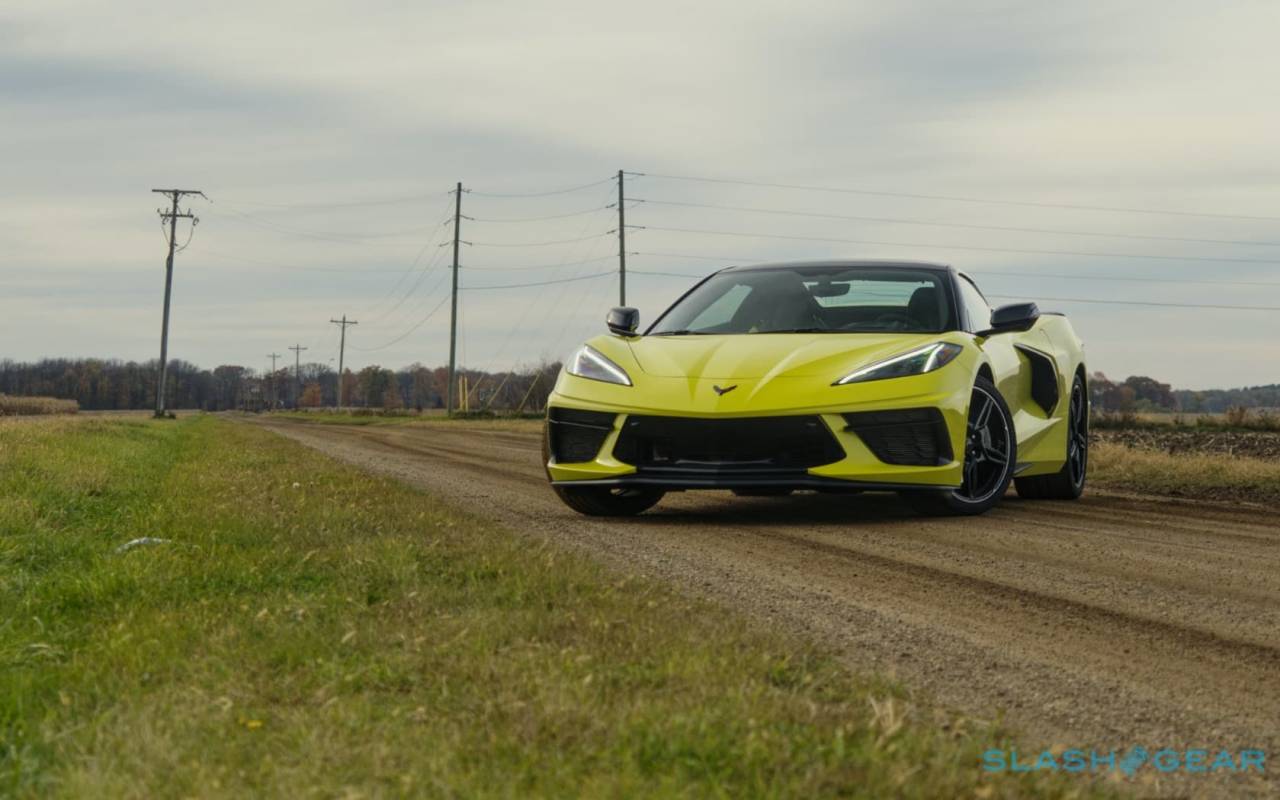 Value is subjective, of course. No, this particular $93,660 Corvette isn’t cheap but, given the sort of cars it competes so strongly with, it’s hard to argue that it doesn’t punch above its weight. I’d keep the Z51 package and the MagneRide, and maybe compromise on the 2LT trim to keep the overall sticker down, but even if you maxed it out and made the dealer’s day you’re still well under the 911 and even McLaren Sport Series I think the ‘Vette can spar with.

History, and heritage, can be great. At their best they set expectations, just as long as you avoid falling into the same old ruts as before. While what’s new about the Corvette C8 is special, then, it’s how Chevrolet maintains its old values like attainability and everyday usability that really makes this car shine.