With the arrival of the 2020 Cadillac CT4-V, membership in the automaker’s “V” club has never been more attainable. Promising to take the new entry-luxury sedan and give it not only an entertaining jolt of performance but a distinct personality from its German rivals, the CT4-V also gets the spoils of Cadillac’s latest architecture gadgetry – and flagship GM tech like MagneRide 4.0. That’s a lot for not so much money: could this newest “V” simply be trying too much at once?

Cadillac has been using the “V” badge for its performance cars for years now, though with this latest generation it’s juggling the exact nomenclature. This CT4-V isn’t the ATS-V‘s successor; instead, it’s more like the hotter-but-not-outrageous variants that used to get “V-Sport” badging. For maximum performance we’ll need to wait for the CT4-V Blackwing, itself misleadingly-named because it’s not actually expected to use the Blackwing V8 engine briefly offered on the CT6, just repurpose its branding. 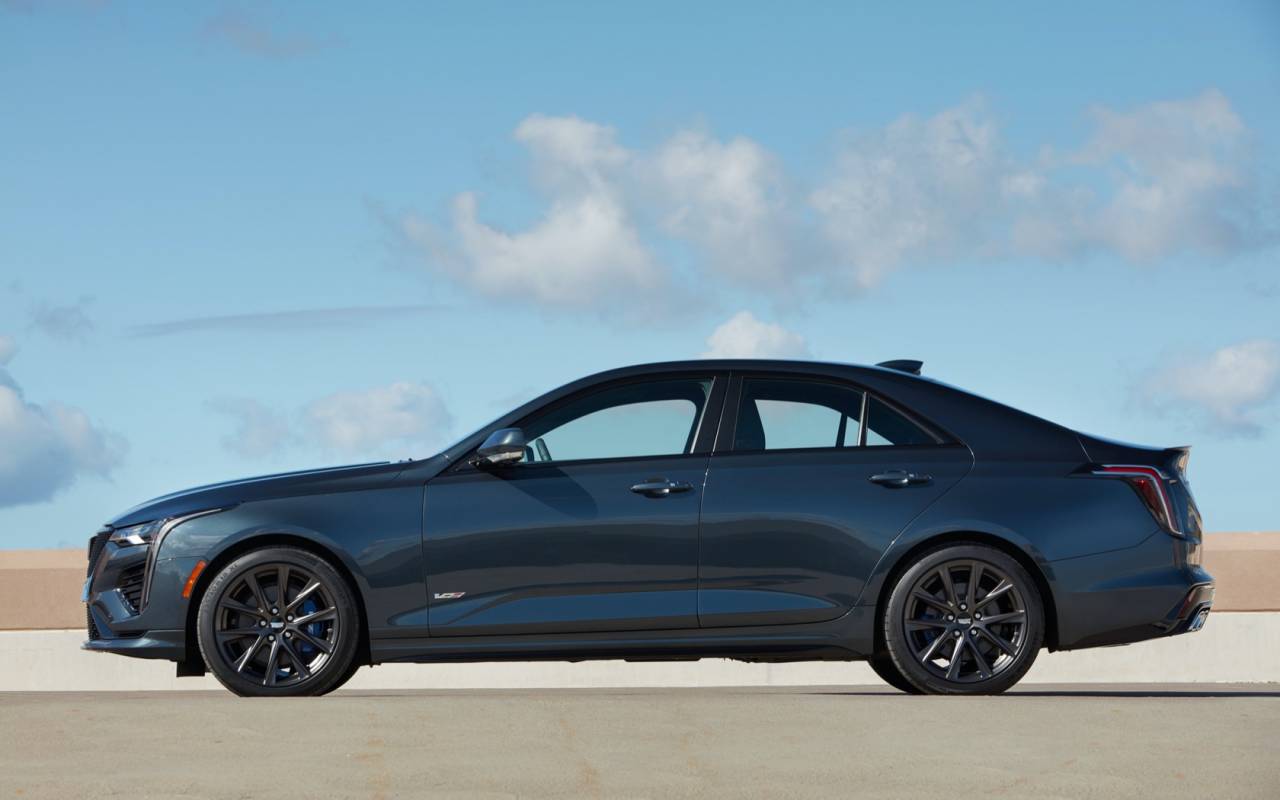 Confused yet? What you really need to know, at least for the moment, is that the 2020 CT4-V uses a 2.7-liter turbocharged 4-cylinder engine with 325 horsepower and 380 lb-ft of torque. It gets Magnetic Ride Control 4.0 as standard, a mechanical limited-slip rear differential, along with Brembo performance brakes with 4-piston fixed calipers. High-performance brake linings, which Cadillac says are better able to resist heat-fade, are available.

It leaves the CT4-V, on paper at least, more than competitive with the German alternatives that Cadillac sees as its primary targets. At $45,490 (plus $995 destination) it’s $1,500 more than an Audi S3 but with considerably more power. A BMW M235i xDrive Gran Coupe is the same money as the CT4-V, but again there’s less power in the BMW. Mercedes-AMG’s A35 4MATIC and CLA35 Coupe are right around what you’ll pay for the Caddy, but – you guessed it – you still won’t get as much power. 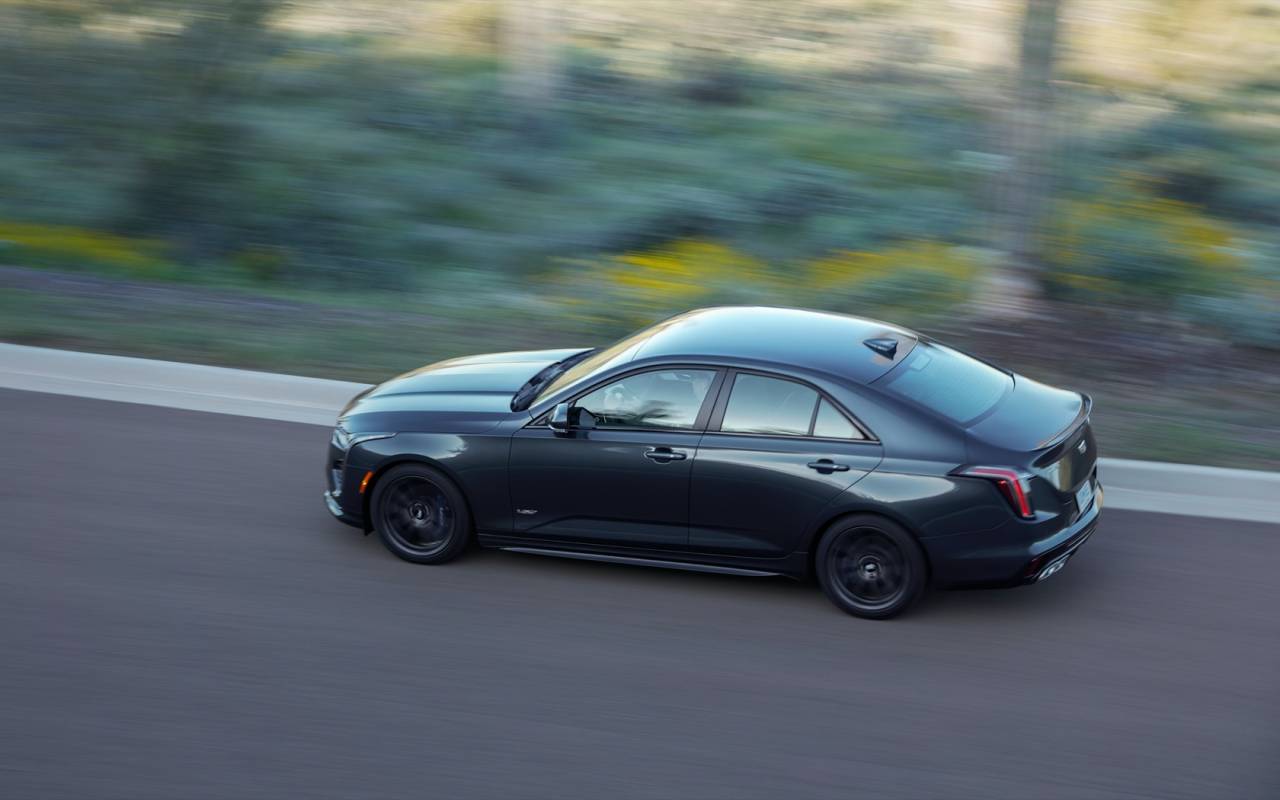 Under the handsomely sculpted sheet metal, this is more of a change for Cadillac than you might think. The CT4 is one of the automaker’s first cars to use its new “Vehicle Intelligence Platform,” effectively the next-generation network of interconnected modules covering everything from engine, ADAS, infotainment, and more. Rather than treat each of those systems as separate, the new architecture opens the door to things like over-the-air updates that go far beyond just delivering new maps to your navigation.

Some of Caddy’s decisions don’t quite work, though. The 10-speed transmission, for example, is eminently suited to the CT4-V when in Tour mode, slurring through the gears in the background. That’s perfect for long highway jaunts, but all those ratios become a headache when you switch to Sport. 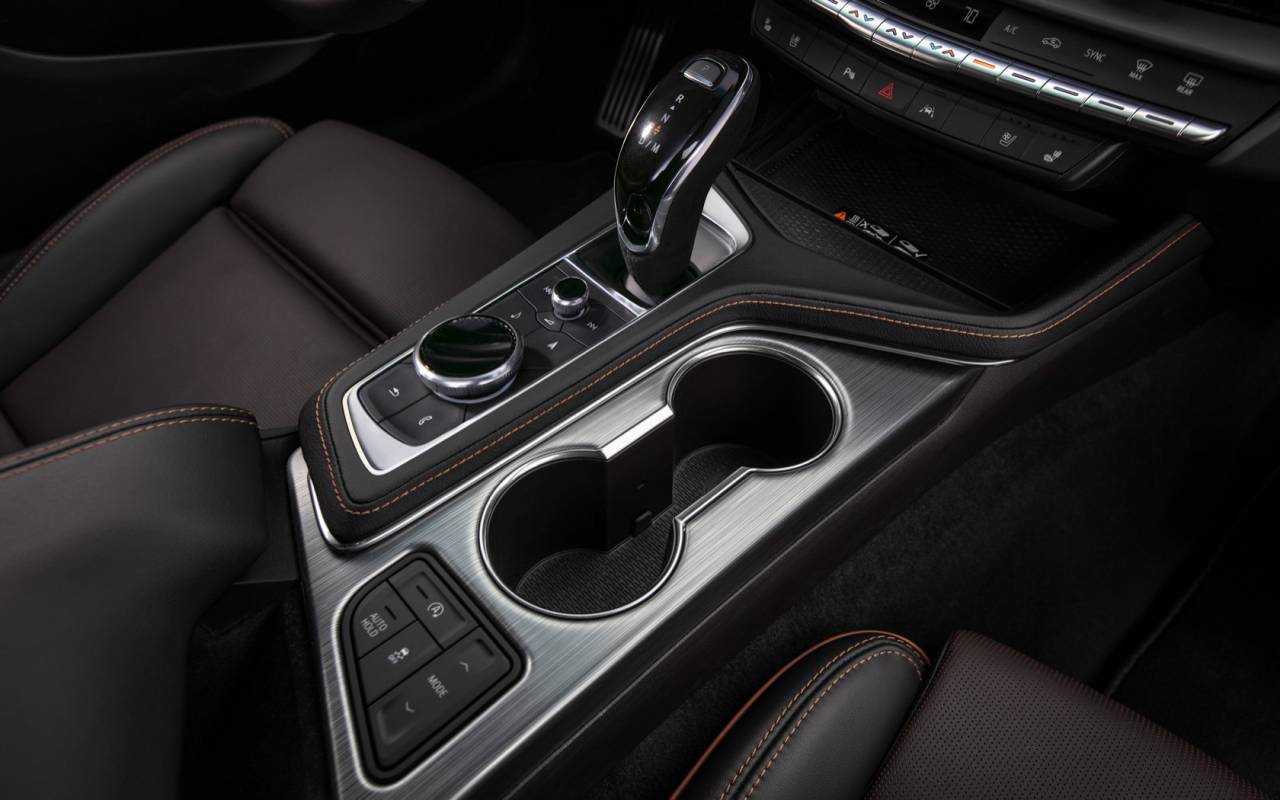 There’s just too many gears, frankly. Sport mode speeds up the changes, but hitting the right ratio at the right time can be an exercise in frustration. Too often I’d find myself flailing at the magnesium paddles as a fast corner approached, wanting to be in third or fourth but having to drag the CT4-V down from seventh or higher.

Cadillac’s answer is Performance Driving Mode, which promises to detect “spirited driving” and then make the car more aggressive in response. It’s enabled in Sport and Track modes, but somewhat confusingly that doesn’t mean it’s always activated. Instead, if the car’s systems decide you’re pushing hard, it’ll start holding onto lower gears, avoid upshifting automatically while you’re cornering, and generally coax more urgency out of the drivetrain as a whole. 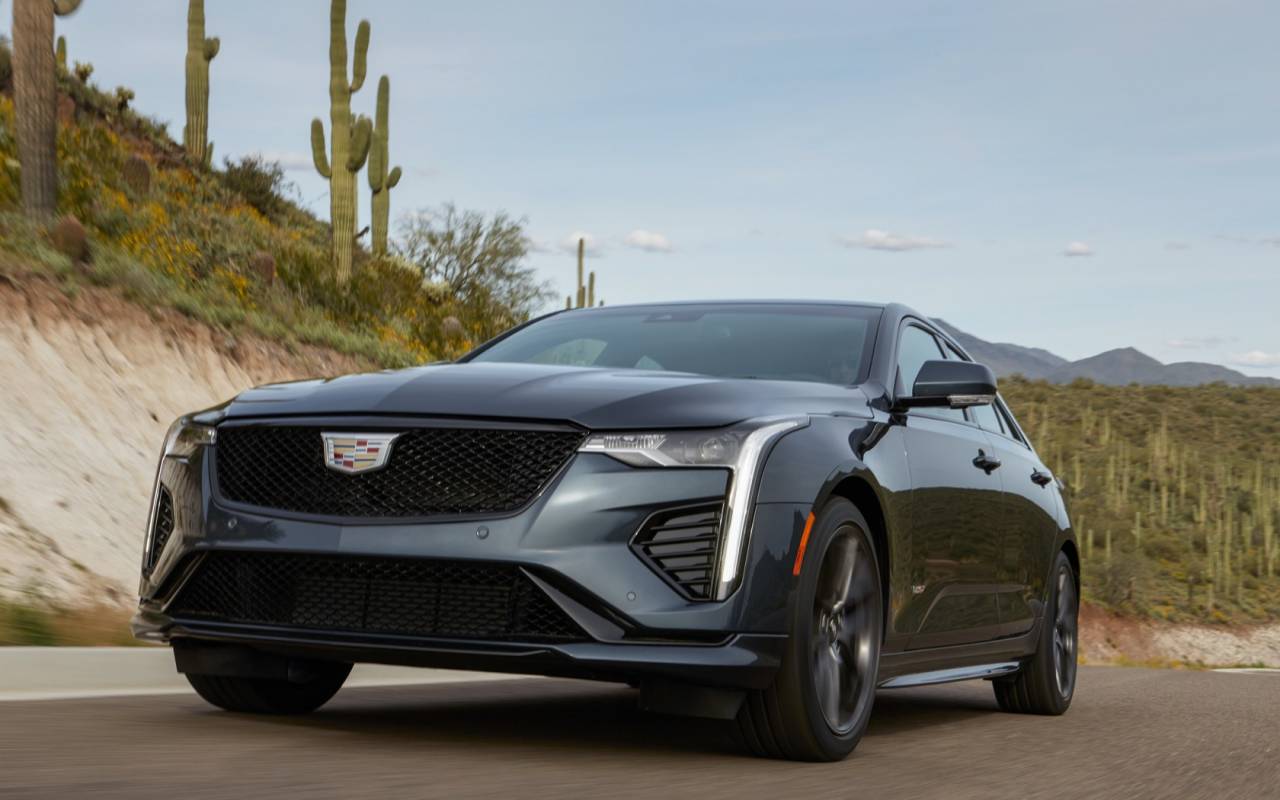 In theory that’s great; in practice I just wanted a “PDM” button so that I could turn it on or off myself. The system appears with a little icon on the dashboard; after a while it deactivates again. Unless you’re blessed with one perfect road after another, there’s a decent chance PDM might have switched itself off in the meantime.

It’s a shame, because when I finally encountered those perfect-storm moments of right corner, right gear, right settings, the CT4-V is clearly capable of greatness. All-wheel drive is an option but you really don’t need it: the rear-wheel drive of my test car had more than enough grip. That’s obviously different if you regularly deal with snow and ice during the winter, and I’m glad Cadillac now at least offers both RWD and AWD on its V-cars. 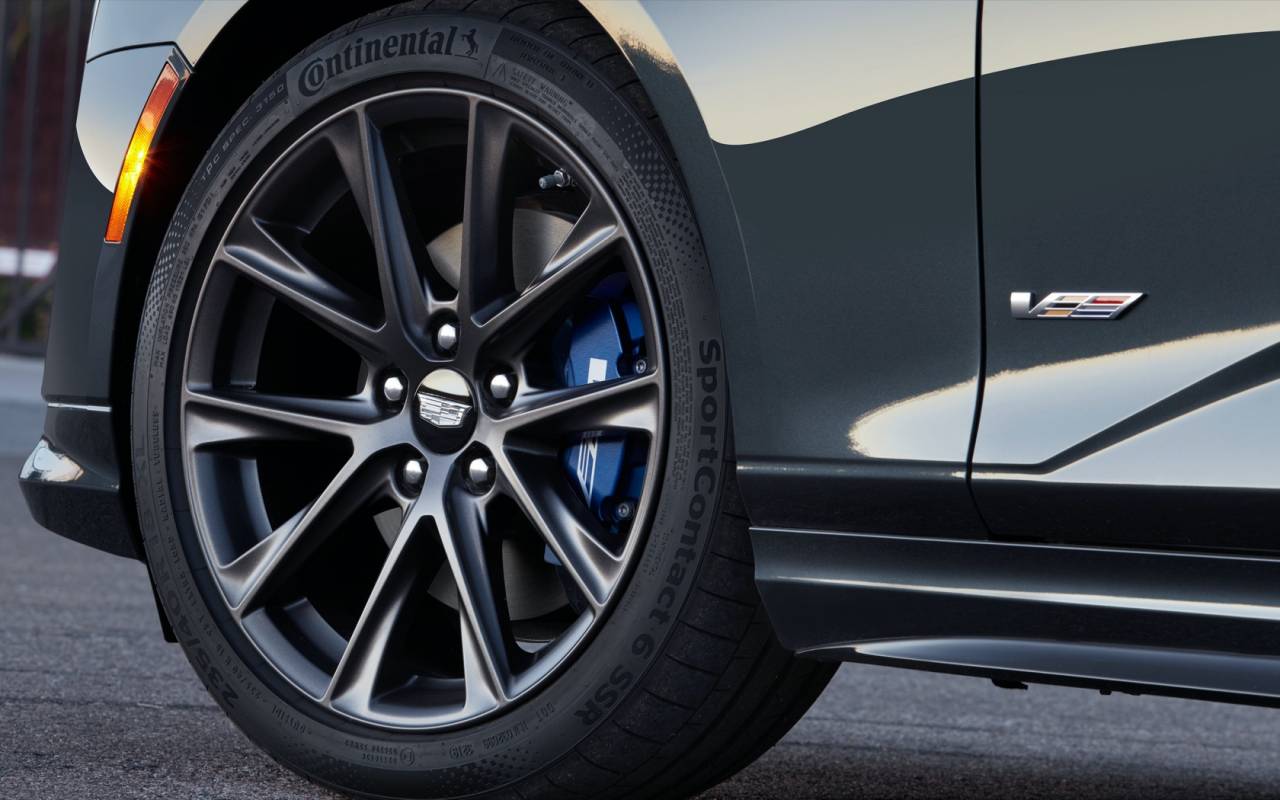 Similarly, the standard-fit Magnetic Ride Control 4.0 is a dream. That now uses embedded accelerometers in all four shocks, all the better for monitoring road conditions and adjusting the firmness of the dampers. It’s silken in Tour, just the right blend of compliant stiffness in Sport, and a crying shame that it’s exclusive to the CT4-V and can’t be added to its more affordable siblings. 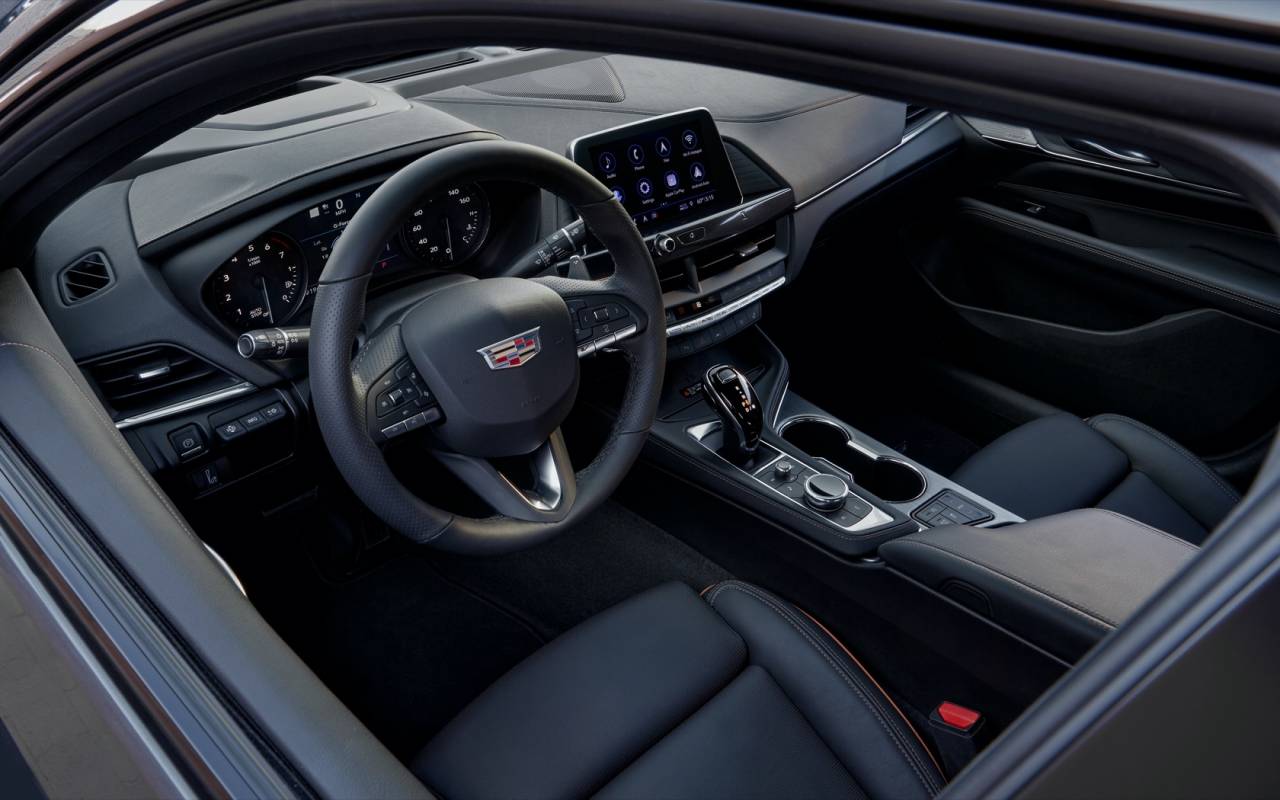 It doesn’t feel quite as special as its German rivals, though. The standard leatherette seats had been switched out for leather in my test car, but the hide doesn’t feel much better than you’d experience in a well-spec’d Chevy. Even with silver trim, the parts-bin switchgear doesn’t entirely feel the part, and the dashboard styling seems like an afterthought. Swathes of clean surfaces only really work if the materials themselves are top-notch, and maybe it’s too much to expect from the CT4-V’s aggressive pricing for that to be the case.

Analog tach and speedo dials flank an 8-inch display, and there’s an 8-inch touchscreen atop the center console. Thankfully the Cadillac User Experience has come a very long way from its rightly-derided early iterations. It’s fast, cleanly laid out, and the OTA update support offers intriguing possibilities down the line. Cadillac wouldn’t comment on whether it would be adding wireless Android Auto and Apple CarPlay support, for example, but confirmed that it theoretically could with the new architecture. 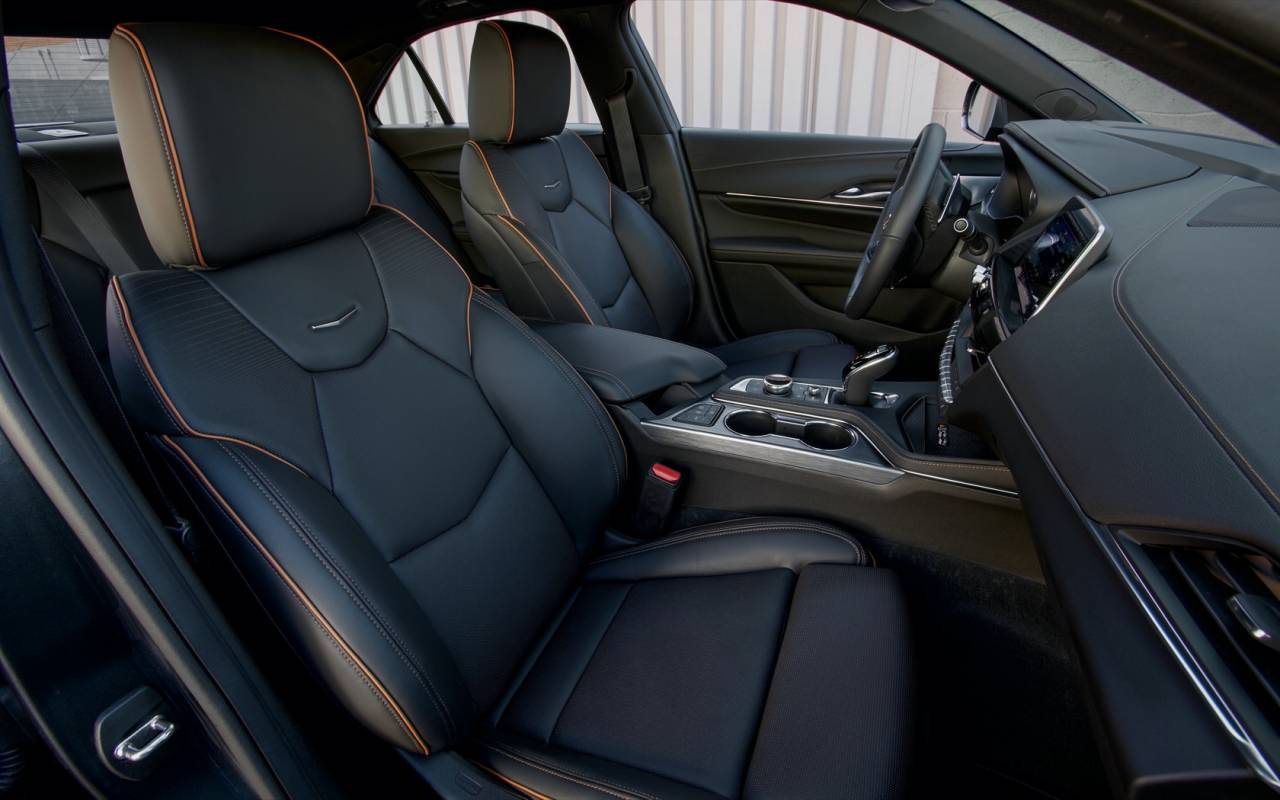 Unfortunately that doesn’t include retroactively adding Super Cruise, and if you want Cadillac’s hands-free driving assistance you’ll have to hold off on putting in your CT4-V order. It’ll be available on the 2021 model year cars, and include the newer auto-lane-change feature.

While things are spacious up front, the rear of the CT4-V isn’t quite so accommodating. It may be a physically larger car than its rivals, but the 60/40 split rear bench feels snug, particularly on legroom. The 10.7 cubic feet of trunk space is competitive, at least. 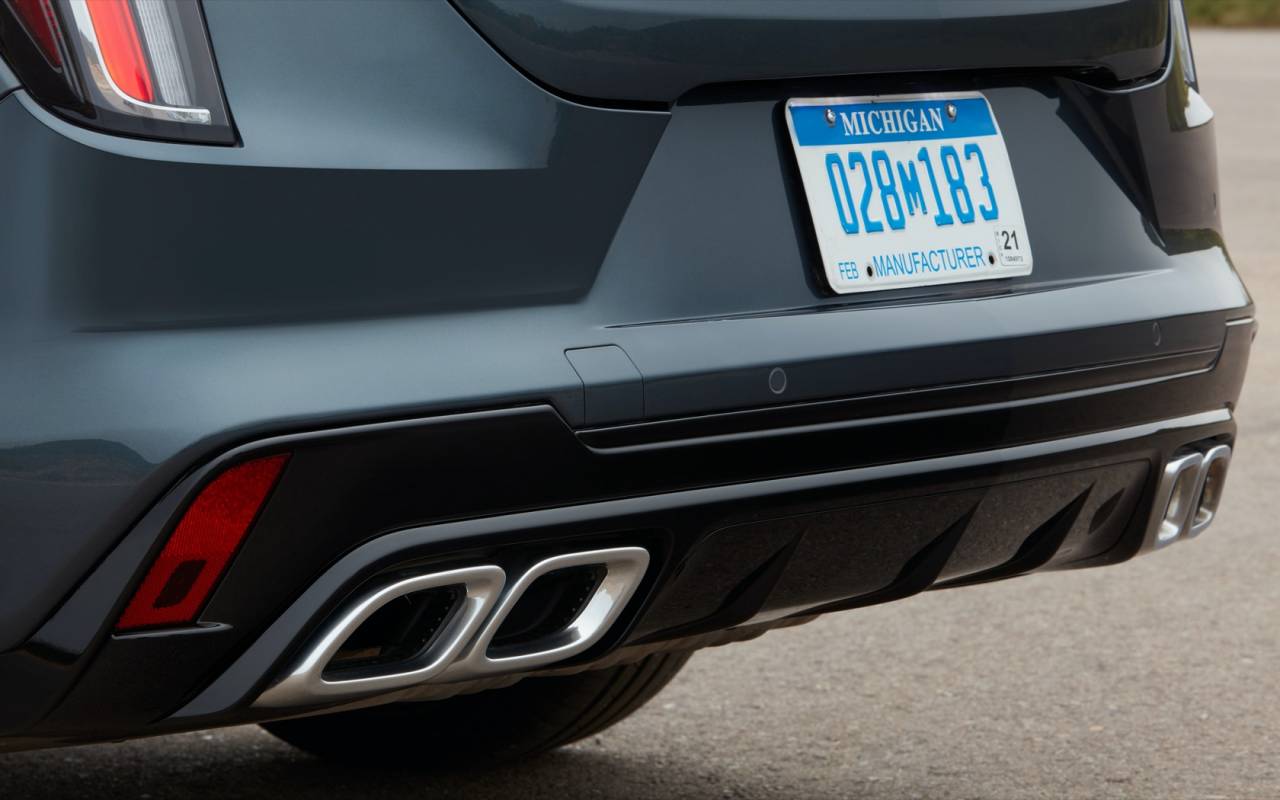 As for the soundtrack, though the 2.7-liter engine may share its basics with what you’ll find in Chevy’s Silverado, it’s a lot nicer to the ears. There’s some grumble, particularly at very low speeds, but a mixture of mechanical and ANC enhancement keeps the cabin fairly hushed when cruising, or a little more throaty in Sport mode.

Cadillac’s refrain over the past few years has been that it’s too early to give up on sedans. The momentum toward SUVs may be considerable, yes, but plenty of people still buy sedans and there’s an audience out there for performance versions. I can get behind that as a general mentality, just as long as the strategy is more than simply “build it and they will (still) come.”

In some places the 2020 CT4-V shows gems of greatness. The dynamic setup has clearly been well-considered; MagneRide 4.0 is fantastic; and the steering is nicely tuned. On the flip side, I wish Performance Driving Mode behaved differently, and that the transmission logic could be persuaded to maybe just “forget” some of its gears in Sport mode. 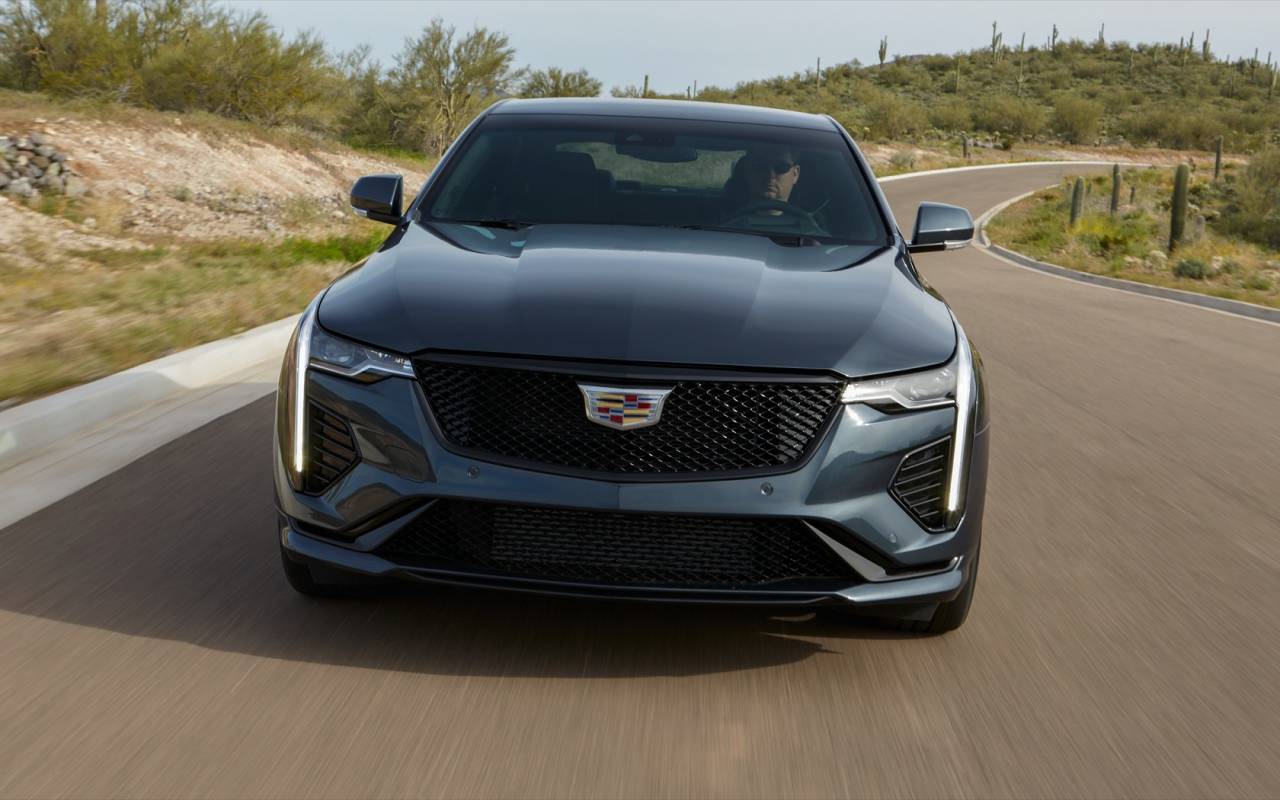 The good news is that, with its new architecture, there’s scope for Cadillac to smooth out many of my complaints along the way. The main exception is Super Cruise – and, frankly, I wouldn’t buy any new Cadillac today that didn’t include that system – but everything else could be tweaked, massaged, and generally finessed, if the automaker was of a mind to.

Democratization of the “V” is a noble goal, and there’s no denying that the CT4-V is competitively priced. What Cadillac needs to demonstrate now is that it’s willing to make the most of all the clever planning it did in designing the CT4, and the CT5 alongside it. As it stands, the 2020 CT4-V is good. Whether it becomes great is firmly in Cadillac’s hands.