A thoroughly modern Audi EV deserves a thoroughly modern interior, and so the 2020 Audi e-tron SUV pushes the tech boat out. The automaker’s all-electric rival to the Tesla Model X and Jaguar I-PACE isn’t expected to roll into the US until early 2019, but Audi has given us a sneak peak of the cabin we can expect.

Unfortunately for those hoping for the space-age environs of the Audi e-tron quattro concept which first previewed the production SUV, the car that rolls off the factory lines will be slightly less dramatic. You can tell it’s an Audi at first glance, with elements borrowed from other recent cars like the A8 luxury sedan, and Q8 flagship SUV. However, the automaker still finds room for something special just for the e-tron. 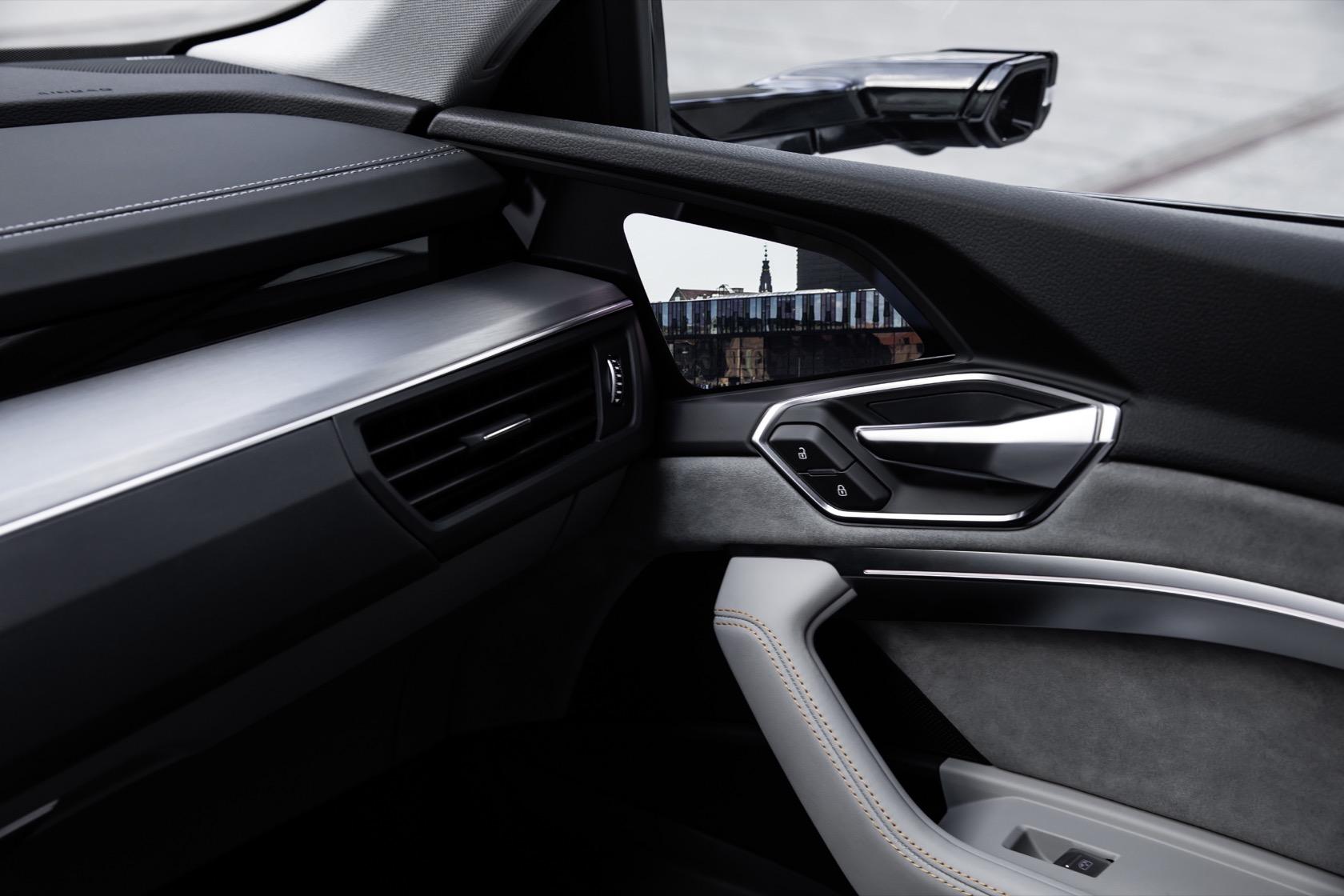 Cameras in place of side mirrors have been a mainstay of concept cars for years now, but Audi plans to bring them to a production vehicle. The e-tron’s Virtual Side Mirrors do away with the chunky appendages all other cars sport, replacing them with cameras mounted on slender metal stalks.

On the inside of the car, mounted at the junction of the A-pillar, the door trim, and the edge of the dashboard, there’s a 7-inch OLED screen embedded. That beams a real-time picture from the external cameras. However, because it’s all digital, Audi can switch up what’s shown depending on the situation. When you’re parking, for instance, the e-tron can show you a different view compared to when you’re on the highway. 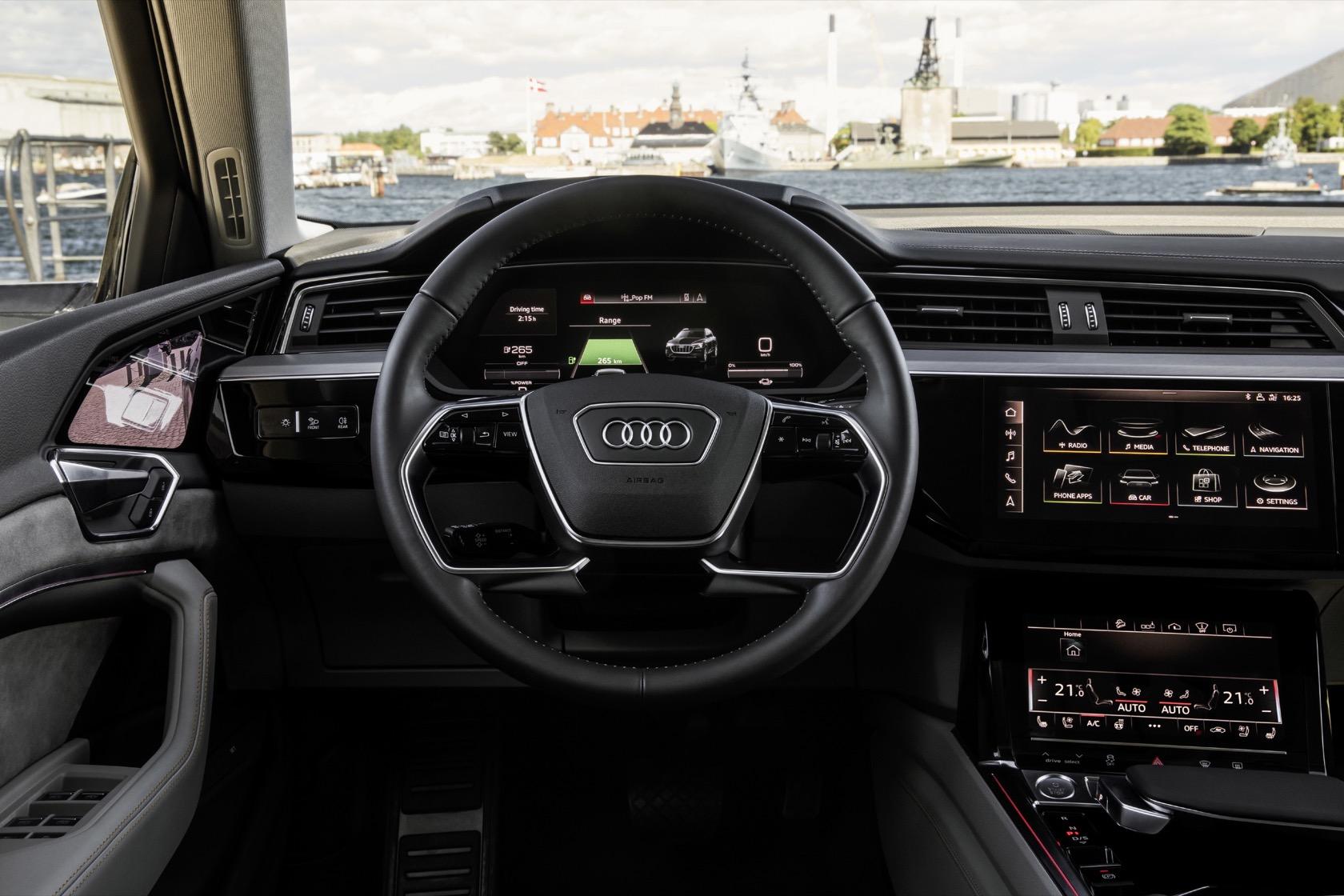 The upshot isn’t just aesthetic, though the electric SUV does look good without traditional mirrors. Audi claims the virtual mirrors help cut drag by between 2- and 7-percent, leaving the EV more aerodynamic as a result. That should pay dividends when it comes to range.

Now for the bad news. While the Virtual Side Mirrors will be offered as an option in Europe when the e-tron launches there, Audi won’t be making them available in the US. You can blame federal regulations for that: at the moment, the US government demands that every production car must have two side mirrors, made of glass. Until that changes, you’ll have to make do with old-school tech.

But wait, there are more screens

Audi led the game when it came to replacing analog instrumentation with digital, and the Virtual Cockpit unsurprisingly makes an appearance in the Audi e-tron, too. The driver gets a widescreen LCD panel to show speed, media information, and a full-screen map if they choose. For the e-tron, it’ll also have special EV graphics, showing things like battery charge and range. 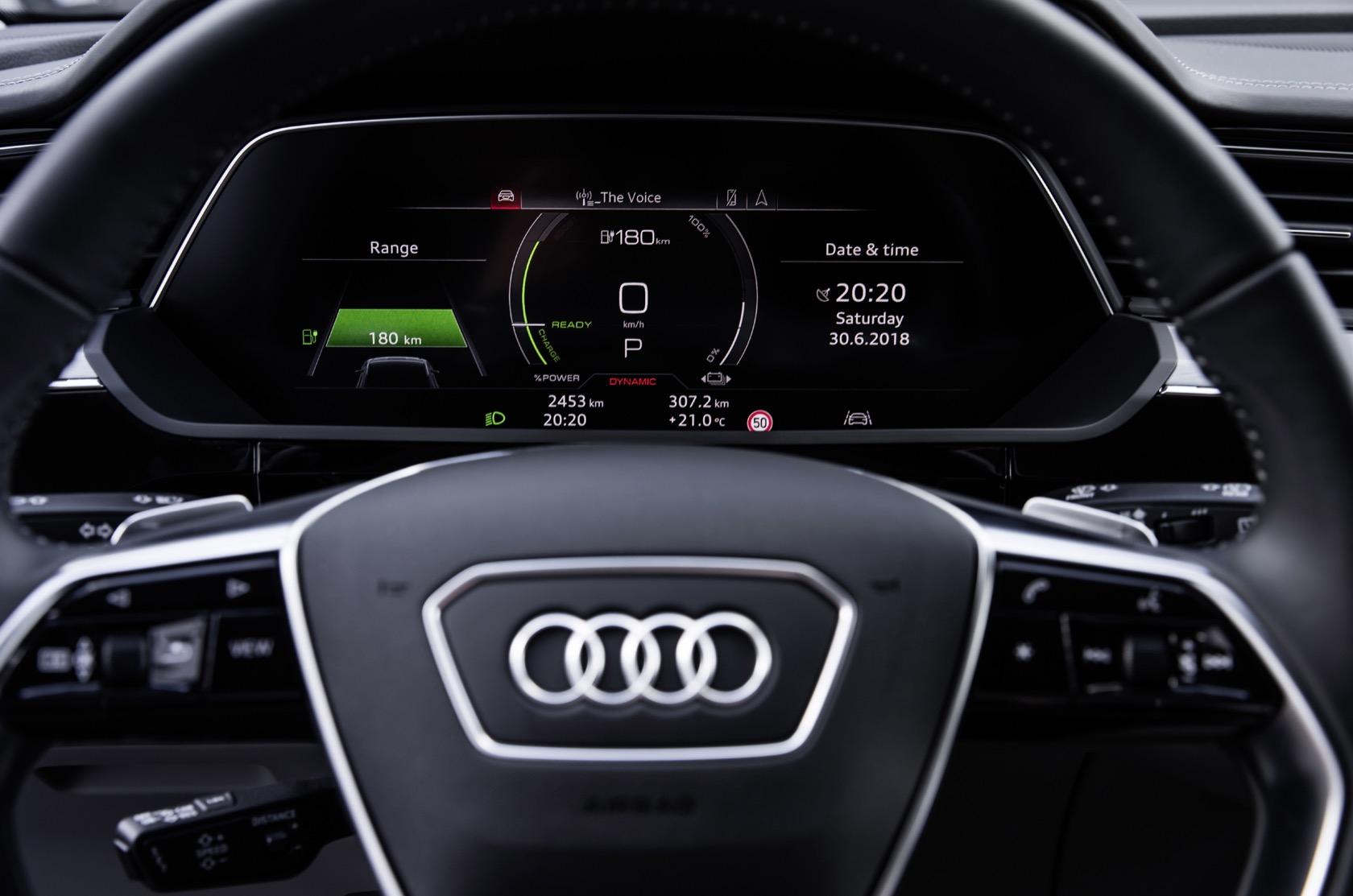 In the center stack, meanwhile, just about everything is controlled by a pair of touchscreens. Audi calls it MMI touch response, and it’s the same infotainment system as we’ve seen used in the 2019 A8 and Q8.

The upper display is the larger of the two, and the e-tron uses that for navigation and multimedia. Like the Q8 and A8 we’re expecting it to be fully connected, capable of tapping into cloud-based voice recognition along with local processing. It’s also where you access your paired phone. New for the e-tron will be EV-related menus, showing information like how far the remaining charge will take you, which driving mode you’re in, and even how you could coax more miles out of the battery if you turn off the climate control or other electronics. 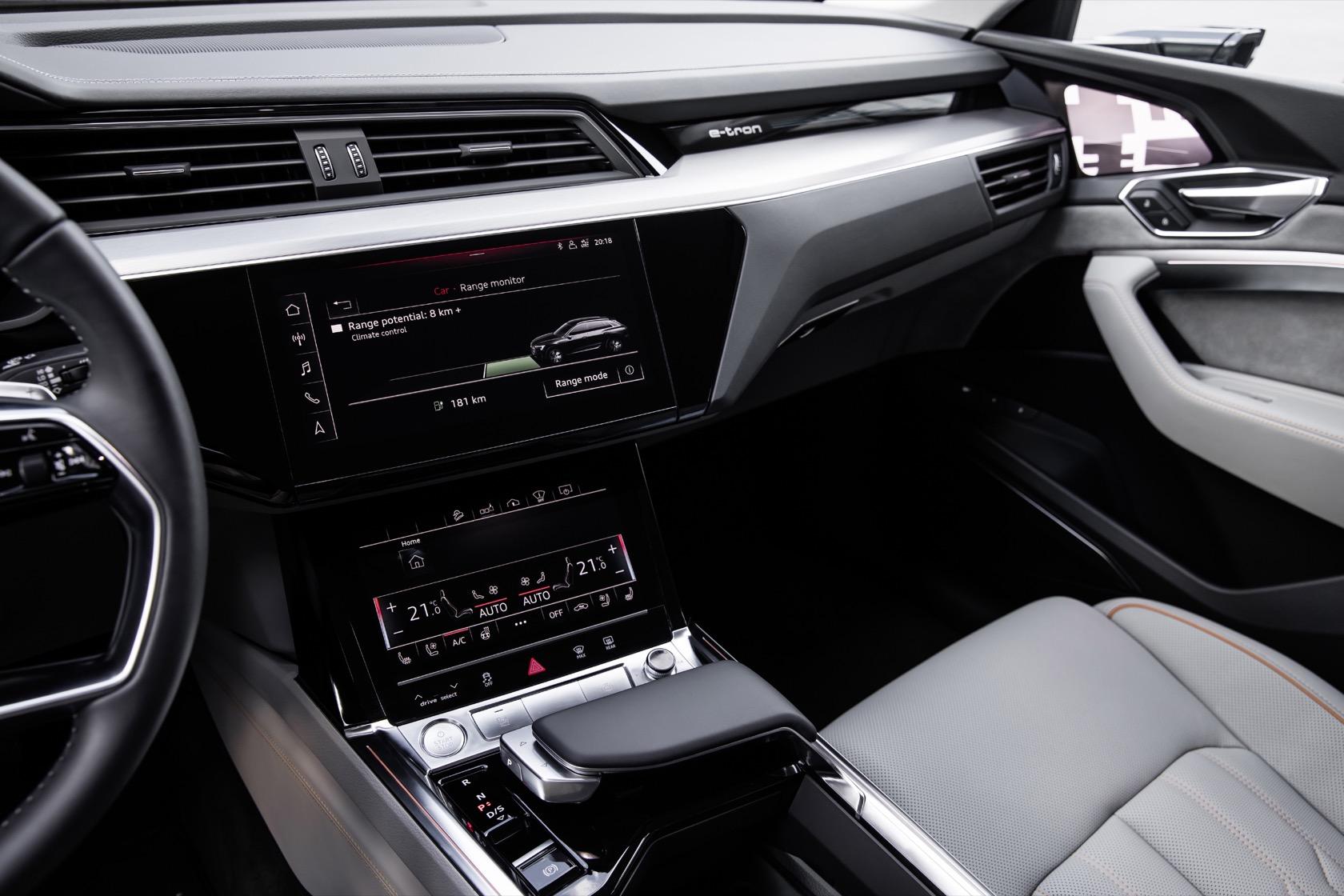 The lower screen handles cabin comfort and text entry. It’s where the e-tron’s HVAC is all managed from, including the heated and cooled seats, and heated steering wheel. Audi also uses it to show a QWERTY keyboard, but as we saw in the A8 you can also sketch out words with your fingertip and have handwriting recognition decipher them.

There are still some physical controls

The e-tron doesn’t have a transmission, and so Audi’s gear selector has a pretty straightforward job. A simple slider switches the SUV between drive, neutral, and reverse. There’s a button for park. 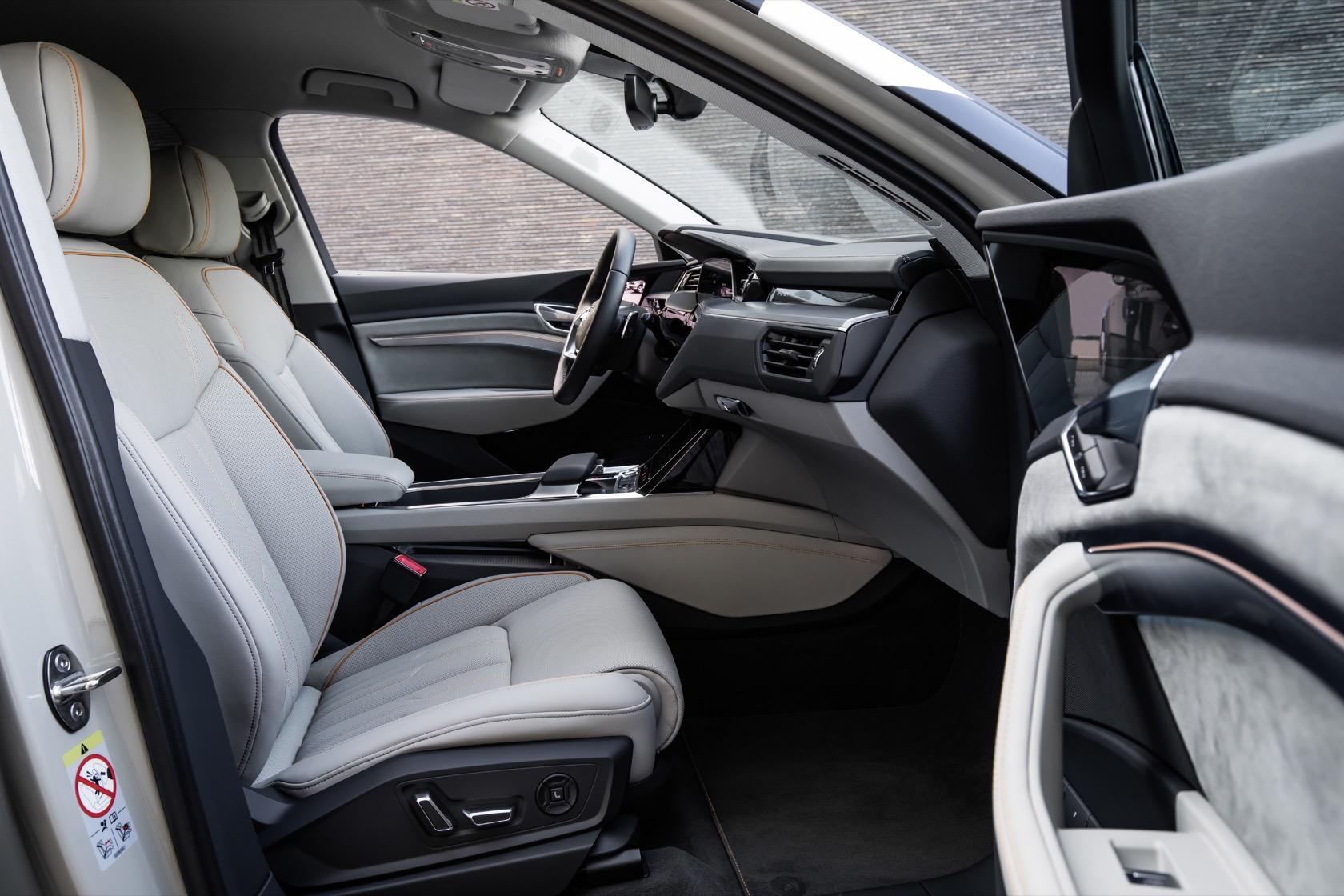 Given those minimal controls, the size of the selector itself might seem unexpectedly big. That’s because the leather-topped surface is designed to be a wrist-rest, supporting your forearm as you tap and swipe at the lower touchscreen.

On the steering wheel, meanwhile, are buttons which can control most of the electronic features without you having to relinquish the helm. That includes switches to page through the Virtual Cockpit panes, shortcuts for the phone and voice control, and a mappable key that can be assigned to the driver’s choice of features. Cruise control is managed with a separate stalk behind the wheel.

Green motoring can be luxurious, too

You might be saving the planet with your zero-emissions SUV, but that doesn’t mean you have to suffer a hair-shirt cabin at the same time. Audi is among the best when it comes to interior trim, fit, and finish, and the e-tron should be no different. Expect real brushed aluminum along with Valcona leather, in among the piano-black trim. 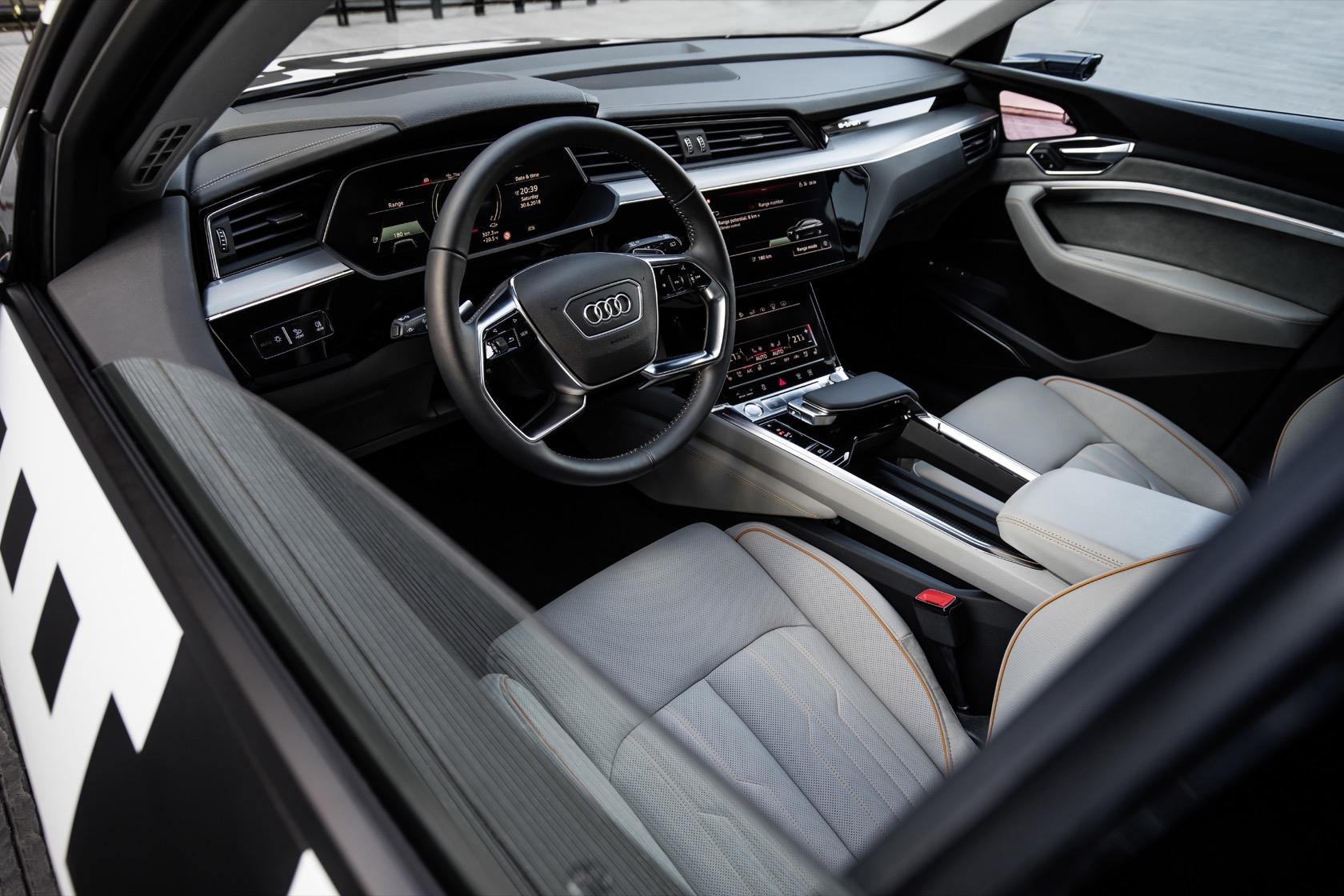 LED pinstripes with customizable colors certainly fits with the e-tron’s personality, though the ambient lighting is a cost option. As is, in fact, contrasting colors – like bright orange – to the leather seat stitching. Audi says it’s meant to look like tracks on a circuit board. 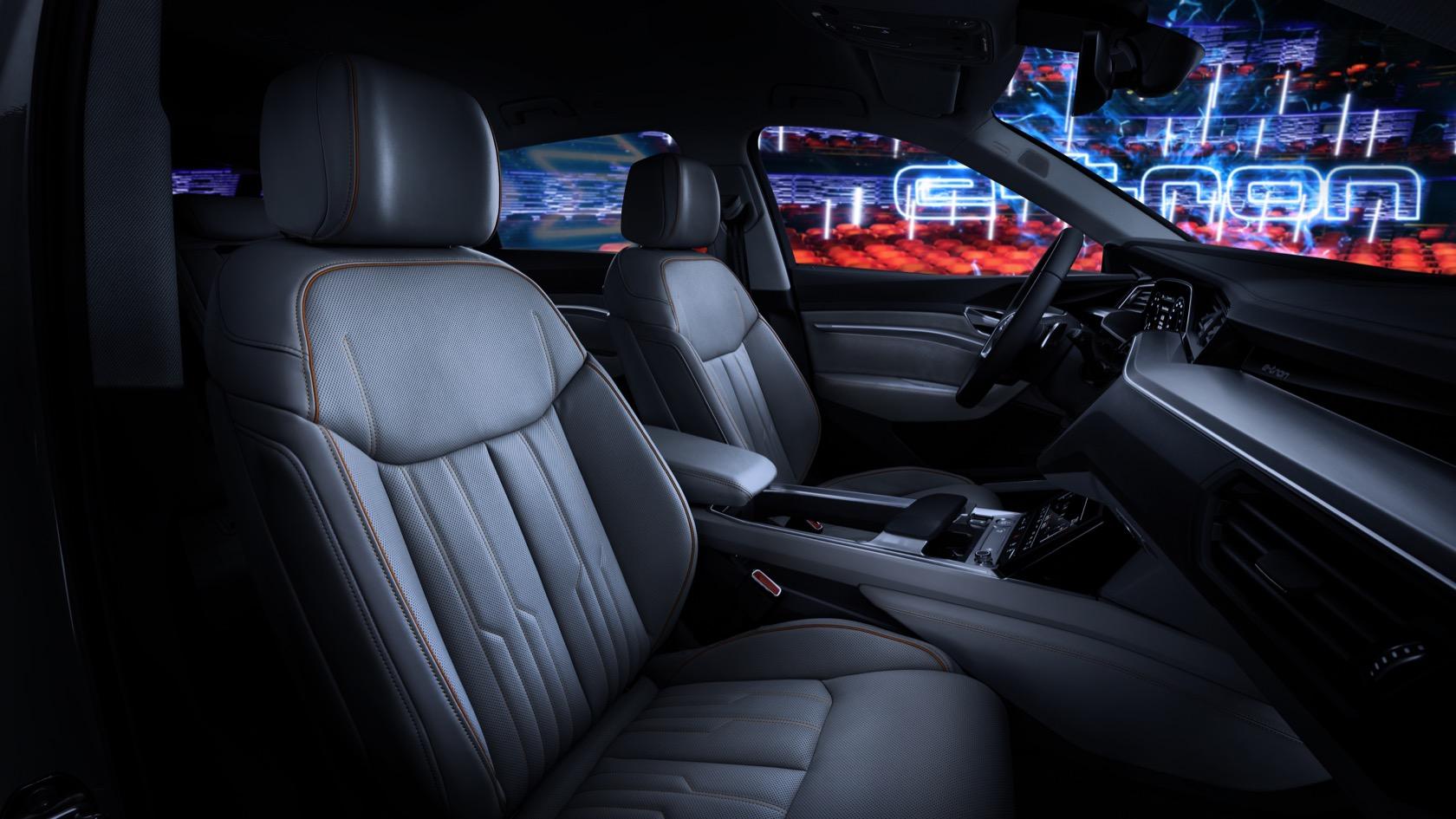 That may be subtle, but the 705 watt Bang & Olufsen 3D surround sound system shouldn’t be. Its 16 speakers are also optional, though we suspect many e-tron drivers will take advantage of the relative hush of the SUV’s cabin to enjoy their favorite tracks. Audi says that not only is the electric car’s drivetrain quieter than the typical gas or diesel engine, but it has packed the e-tron with even more noise insulation just to really deliver that cathedral-hush.

The Audi e-tron should really put the “Utility” in SUV when it launches: after all, there are some core architecture advantages when you use electric motors rather than an ICE drivetrain. Even though you’re getting Audi’s quattro all-wheel drive, without the driveshaft running the length of the vehicle as you’d find in, say, a Q7, the whole floor of the cabin can be flat. 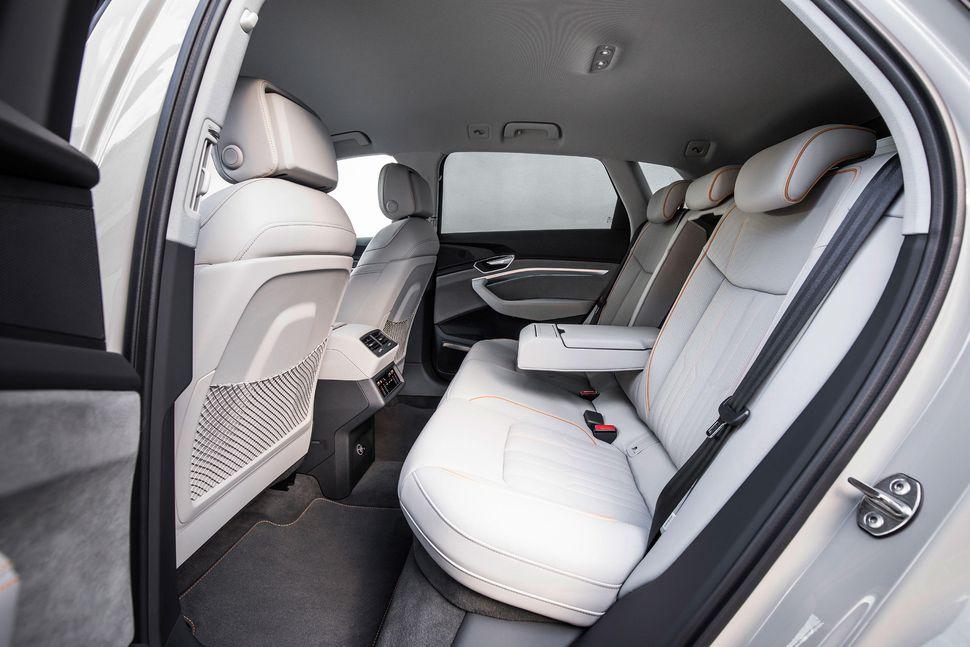 That pays dividends for legroom, particularly when you consider just how much interior space e-tron occupants are getting. Although the wheelbase is similar to that of the Q7, Audi opted to only fit two rows in the electric SUV. That may mean seating for five at most, rather than the seven you’ll get in a Q7, but it should leave them riding in far greater comfort.

There’s no denying that the 2020 Audi e-tron is shaping up to be a mighty interesting addition to the electrification options out there. Right now, the biggest questions we have are US pricing and range. The former won’t be confirmed until closer to the e-tron’s release, which is likely to be early in 2019. 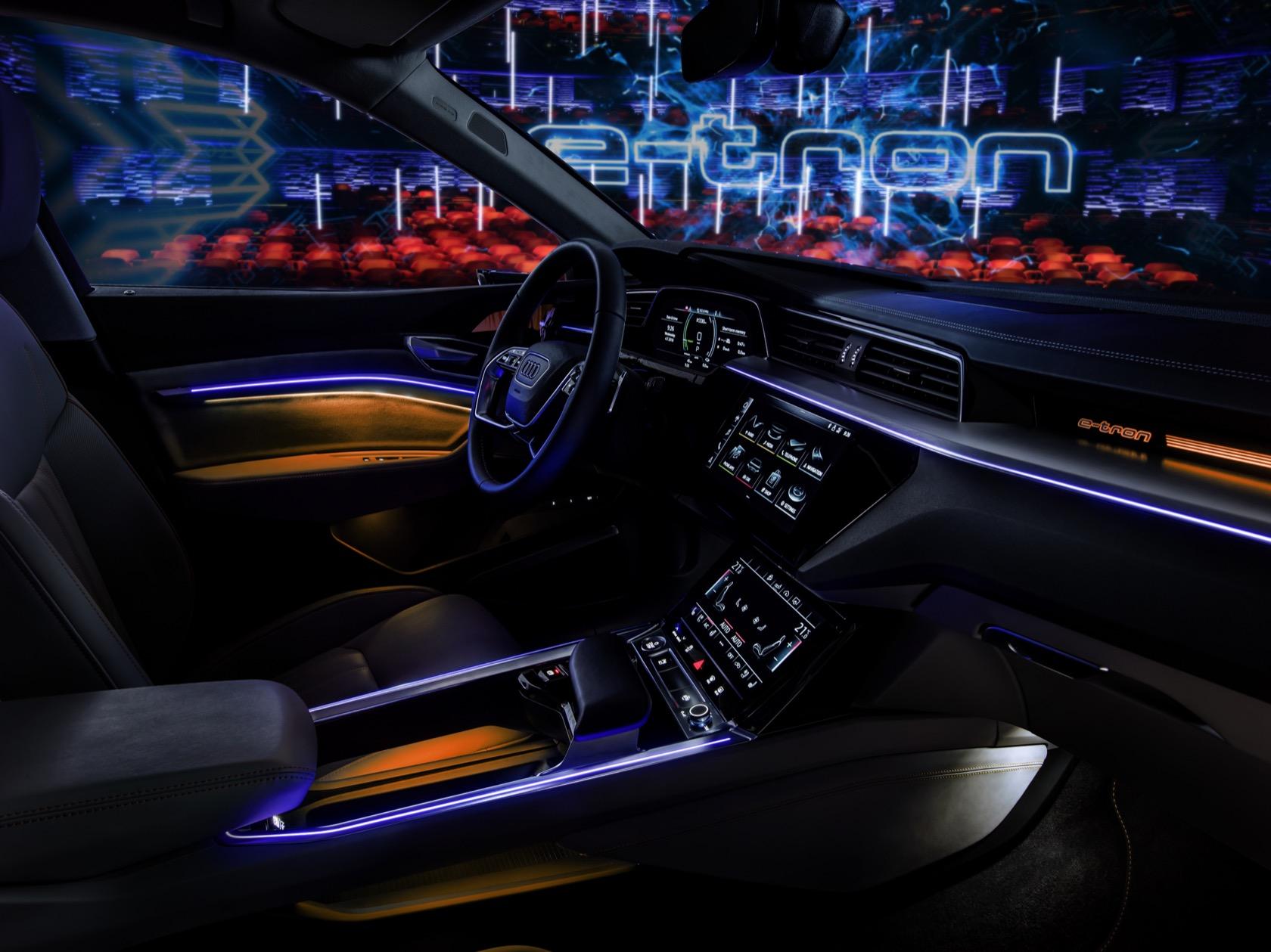 As for how far it’ll drive, for now we only have the European test figures. There, Audi says, the 95 kWh battery pack should last for around 250 miles. The US EPA tests are fairly different, however, and so that number is likely to change somewhat for American roads. 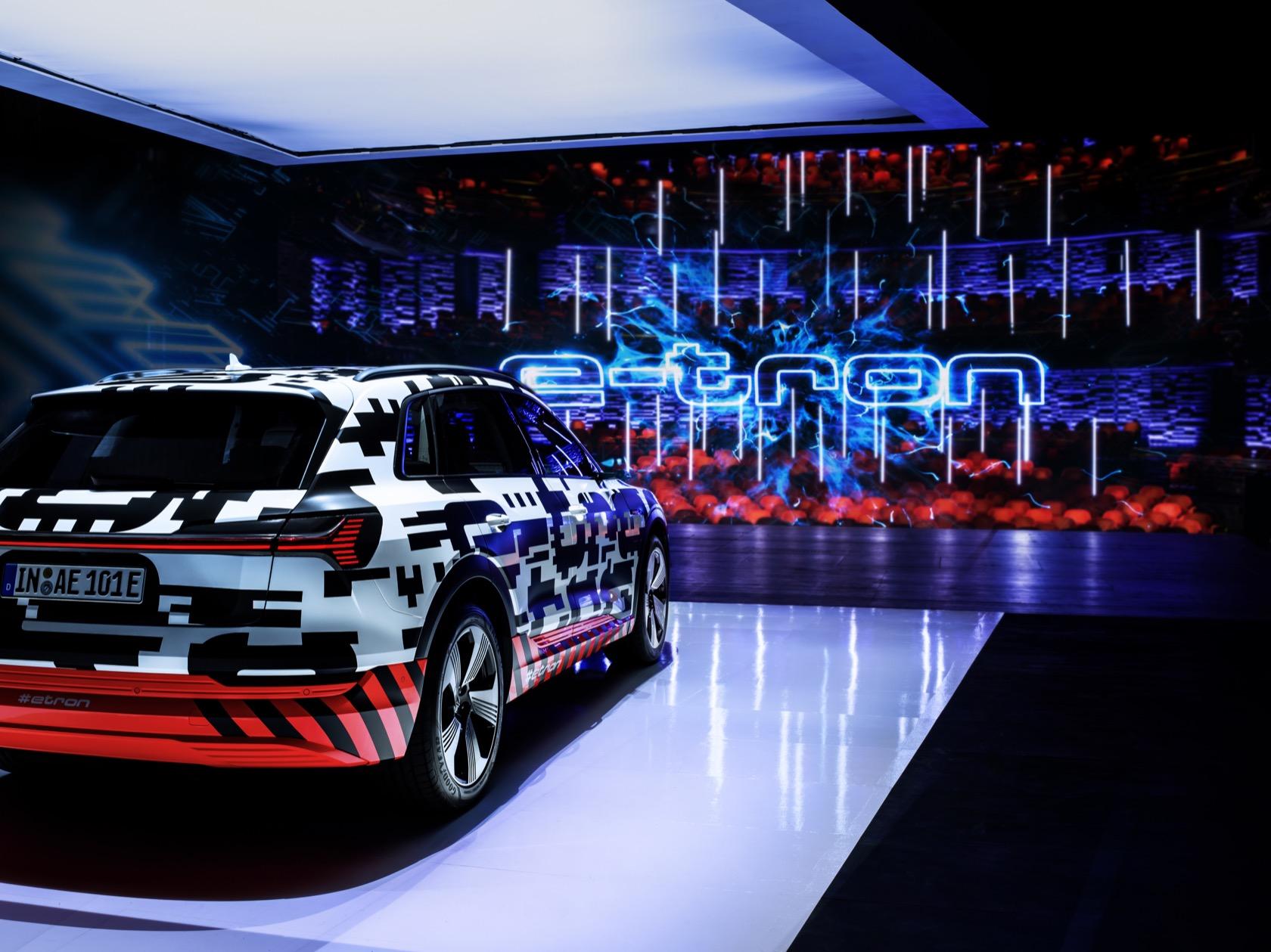 Charging, meanwhile, will support up to 150 kW CCS connections: enough, Audi claims, for roughly 200 miles of range after 30 minutes of being plugged in. For home or office use, meanwhile, 11 kW and 22 kW charger options will deliver a full charge in between 4.5 and 8.5 hours. The e-tron will also take advantage of Electrify America’s charger network, part of Volkswagen Group plan to blanket the US in EV facilities. The goal there is to have 290 locations active by the end of next year.