Mercedes has taken the wraps off the 2019 A-Class, its newest compact car that borrows semi-autonomous driving tech from far more expensive models. Larger and more aggressive than its hatchback predecessor, the new A-Class aims to lure in Millennials with Alexa-like speech control technology, new engines, and more aggressive styling.

It’s the fourth generation of the A-Class, and its most grown-up so far. Whereas the original was a chunky little urban runaround, the 2019 A-Class is more of a two-box hatch, with a longer wheelbase and a more pronounced slope to the hood-line. There are hints of Mercedes-AMG from all angles, particularly the oversized grille with its expansive trapezoidal shape. 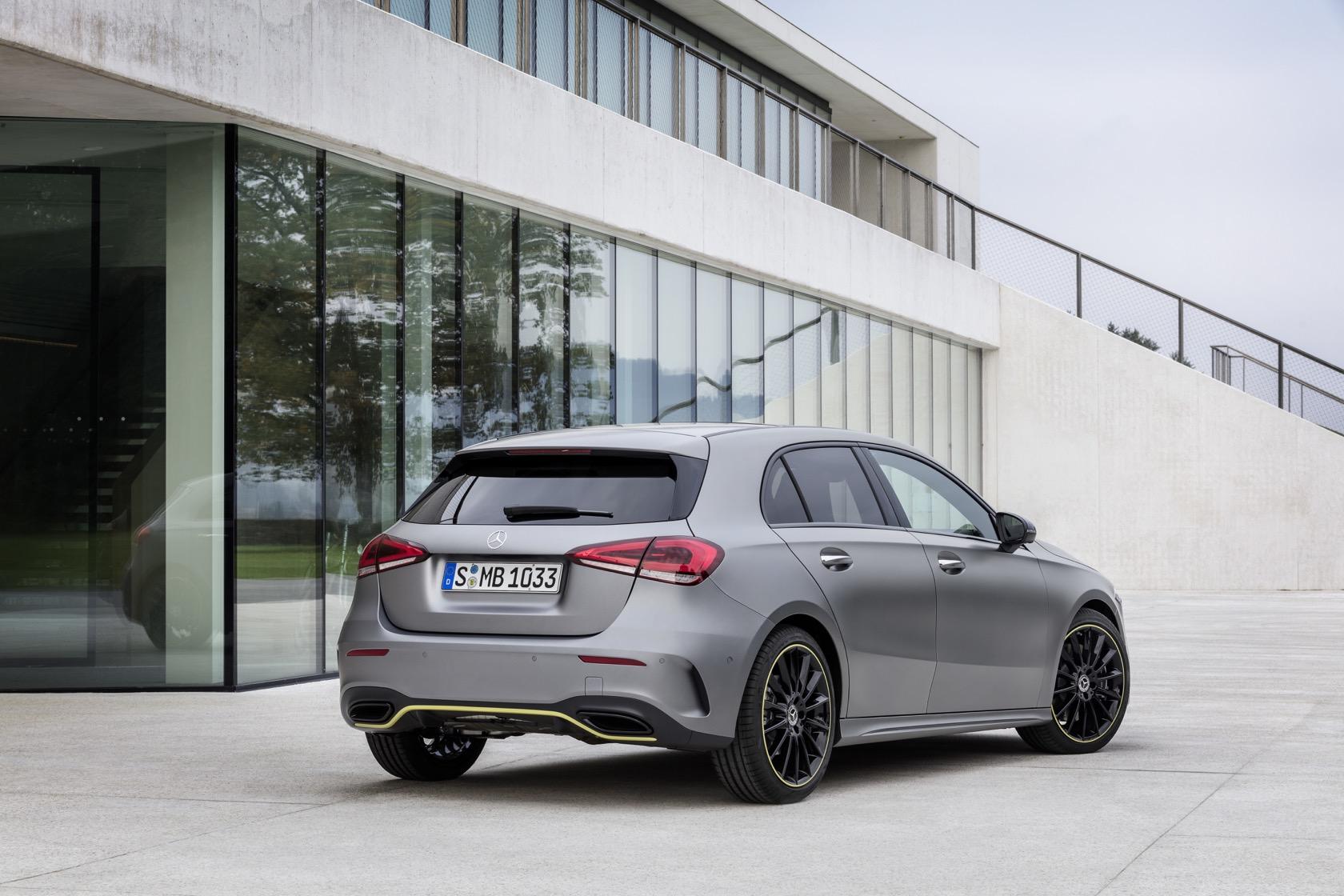 It’s flanked by flat LED headlamps, which include “torch-like” daytime driving lights. On the sides, the wheel-arches have grown and Mercedes will be offering up to 19-inch wheels to fill them. Beefier rear haunches and a two-section rear bumper help with a more planted look, punctuated by the ultra-slim two-section tail lamps.

For Europe, at least, there’ll be three engine options at launch. Two will be gasoline – a 163 horsepower A200 four-cylinder 1.4-liter, with either a six-speed manual or a 7G-DCT dual-clutch automatic, or a 224 horsepower A250 2.0-liter, with the automatic only – and the third a A180d 1.5-liter diesel with 116 HP and the 7G-DCT. 4MATIC all-wheel drive will be optional. 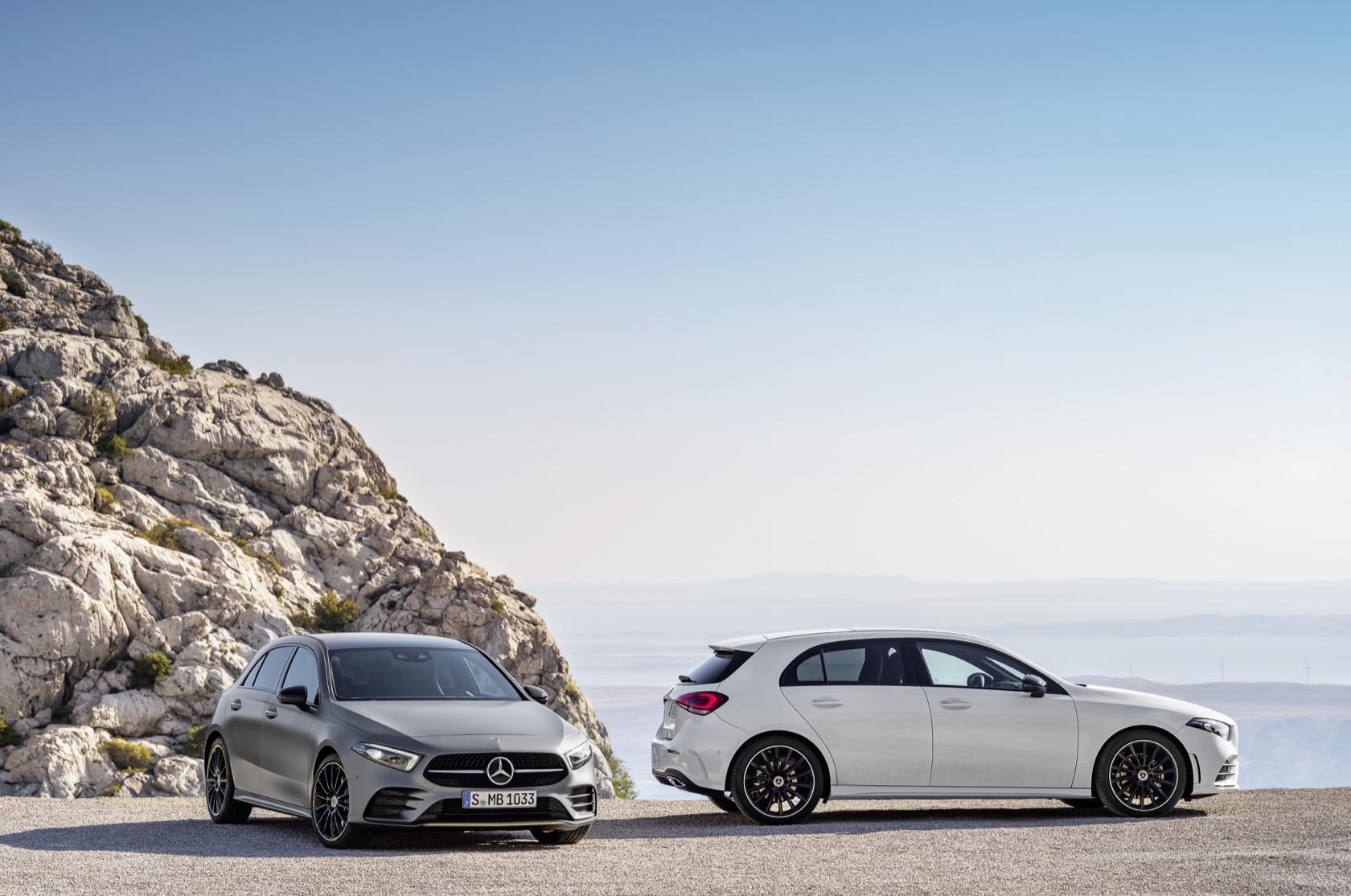 Also on offer will be a selection of suspension systems. All will have DYNAMIC SELECT adjustable drive modes, and use McPherson front suspension; the A250 and all 4MATIC AWD versions will get four-link rear suspension, while the A200 and A180d will use torsion beam rear suspension. Standard-fit is comfort suspension with 15mm lower steel springs. However, there’ll be a suspension with adaptive damping control option, too.

Meanwhile, Mercedes has gone cherry-picking through the S-Class luxury sedan, to borrow some semi-autonomous driving talents for its new entry-level car. The Driving Assistance package will be an option, and include Active Distance Assist DISTRONIC that can automatically adjust the speed of the adaptive cruise control depending on when bends, junctions, and roundabouts are approaching. Active Lane Change Assist is also included, letting the 2019 A-Class change lane itself when you tap the stalk. 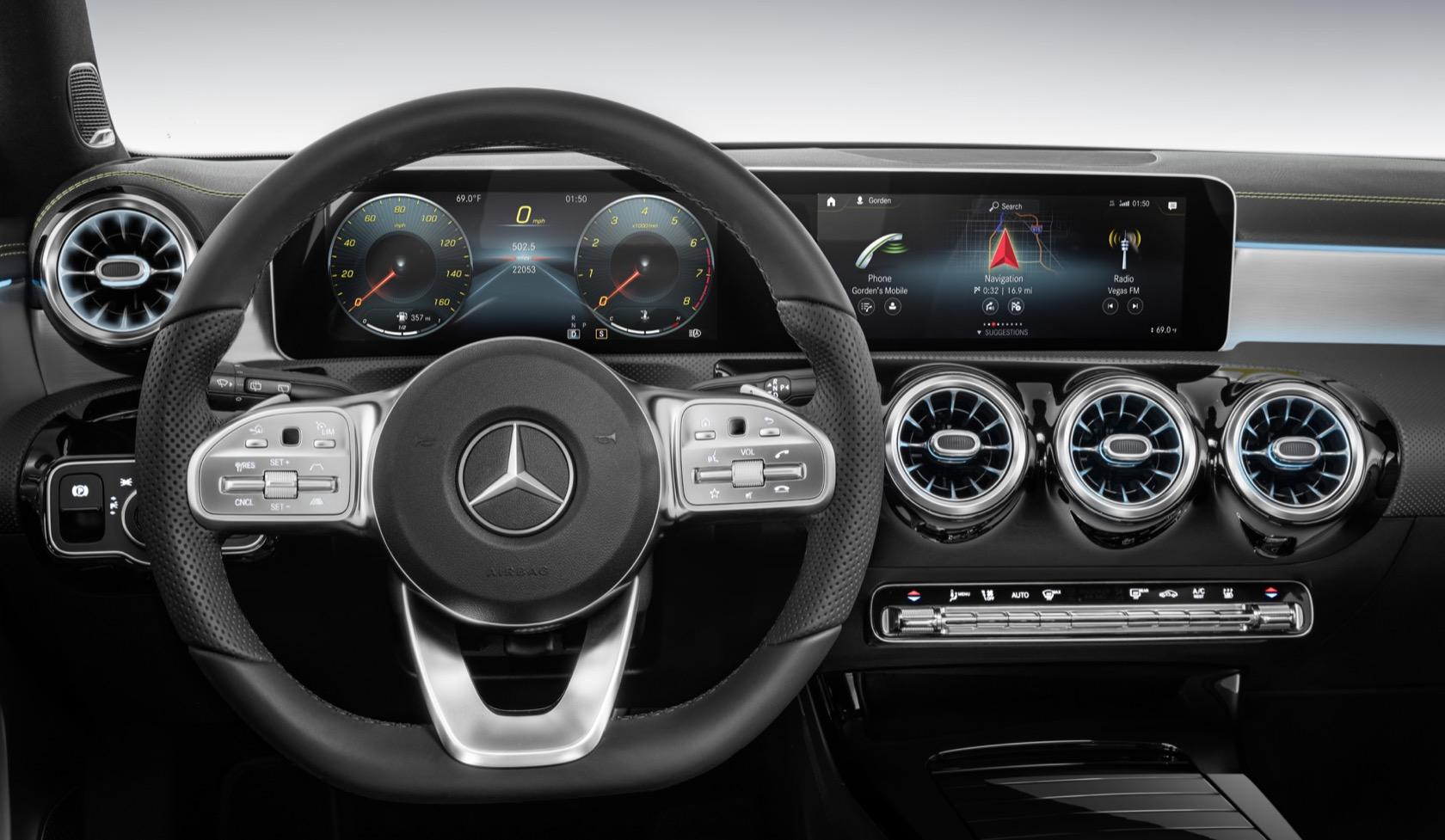 Active Brake Assist is standard, while PRE-SAFE PLUS is optional. The A-Class’ sensors allow it to see over 1,600 feet ahead, using a combination of cameras and radar. It’s controlled with a brand new MBUX Mercedes-Benz User Experience, which debuts in the new A-Class.

The automaker bills that as using artificial intelligence to automatically adapt to the driver. The dashboard can be had with two 7-inch displays, one 7- and one 10.25-inch displays, or in top-spec form, with two 10.25-inch displays. These get new 3D graphics, touch for the media display, and voice control with natural speech recognition. There’s even an Alexa-like “Hey Mercedes” speech trigger as an option. A head-up display is also optional, and there’s both a touchpad in the center console and the touch joysticks that debuted on the E-Class in the steering wheel. 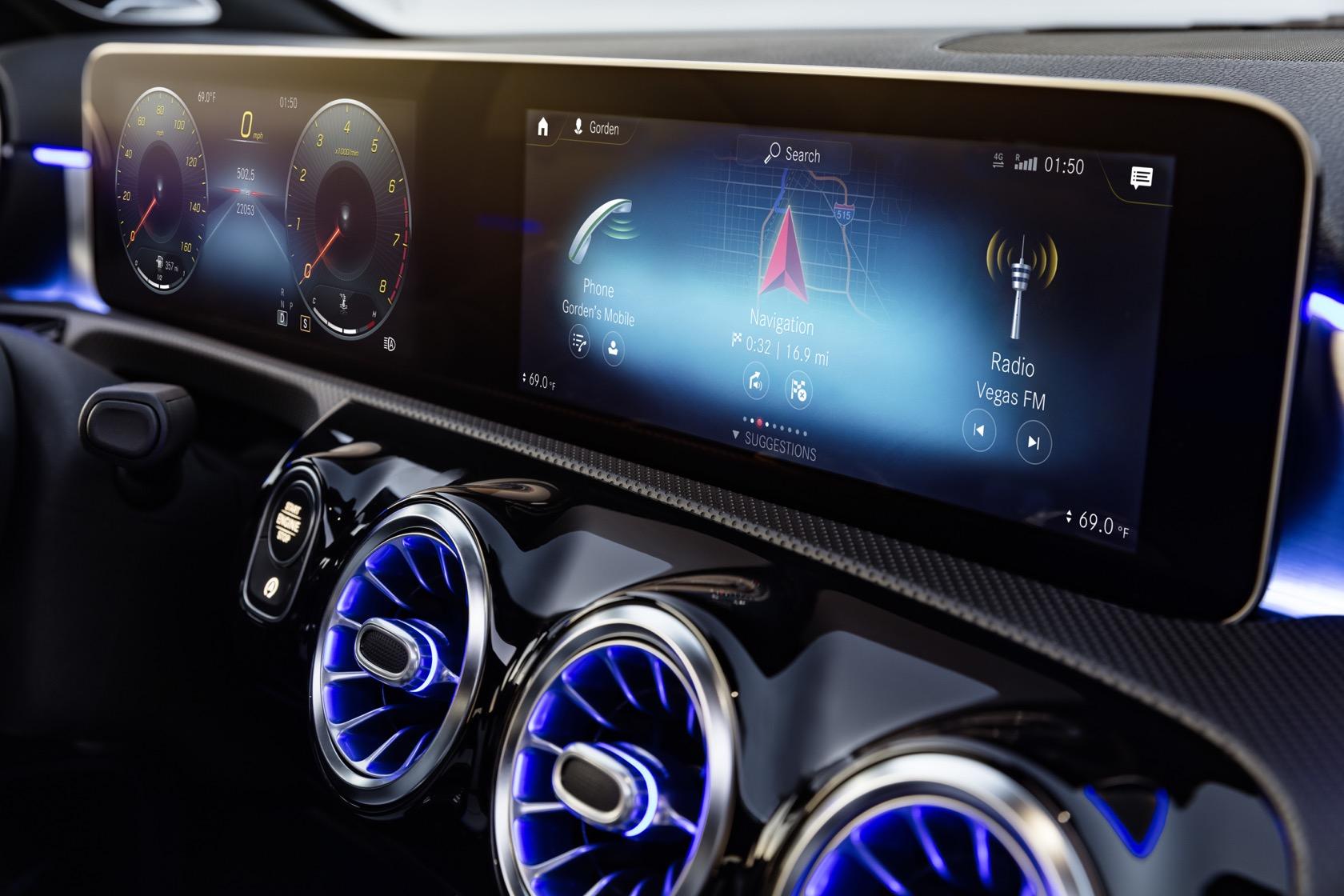 New features of MBUX include Car-to-X communication, which can use accident and traffic reports from other cars nearby – either automatically gathered or manually reported – to adjust the navigation system’s directions, along with a Vehicle Tracker to more easily find your car in a parking lot. The interface layout can be customized according to individual preference, and everything is online so that MBUX can show real-time parking space availability, gas prices, and more.

As for the rest of the cabin, the emphasis has been on maximizing the feeling of space. The cockpit loses its cowl atop the dash, to leave things feeling more airy, and the displays are free-standing. Turbine-style vents echo Mercedes’ more expensive models, and there’s optional ambient lighting with up to 64 colors to choose between. Since that could get overwhelming, Mercedes also set up ten “color worlds” that each act as different lighting presets. 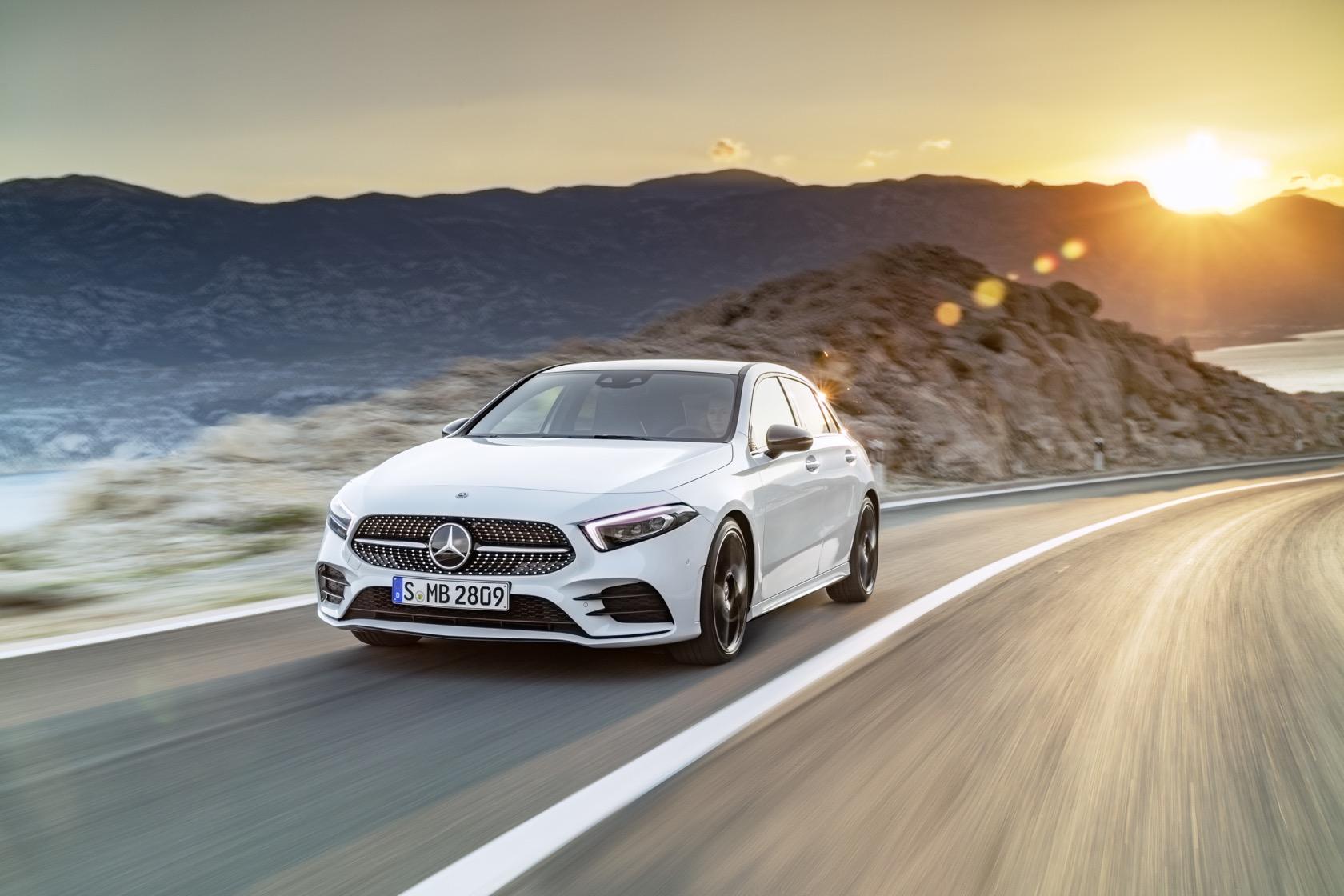 While the 2019 A-Class won’t reach the US in hatchback form, as you see here, Mercedes has confirmed that its smallest model will, indeed, be offered in the country. That’ll be as a four-door sedan, however, to better suit American drivers’ tastes. Although we’ve not seen the final design for that car at this stage, you can expect it to stick fairly closely to the Concept A Sedan design concept.

As for Europe, the 2019 Mercedes-Benz A-Class will go up for order from March this year. Pricing will be confirmed closer to that point. Deliveries, meanwhile, are expected to begin from the spring.