The 2019 Acura ILX means more than just the automaker’s latest attempt to instill “Precision Crafted Performance” into the small luxury category. For Acura, it’s the culmination of a design reinvention intended to make its cars more distinctive, more memorable, and more appealing.

That started in early 2016 with the reveal of the Acura Precision Concept. Rather than previewing a single upcoming production model, the concept car instead foretold Acura’s new aesthetic as a whole. Gone was the beaky grille and apologetic curves, replaced with a bold “diamond pentagon” fascia and much crisper crease lines. 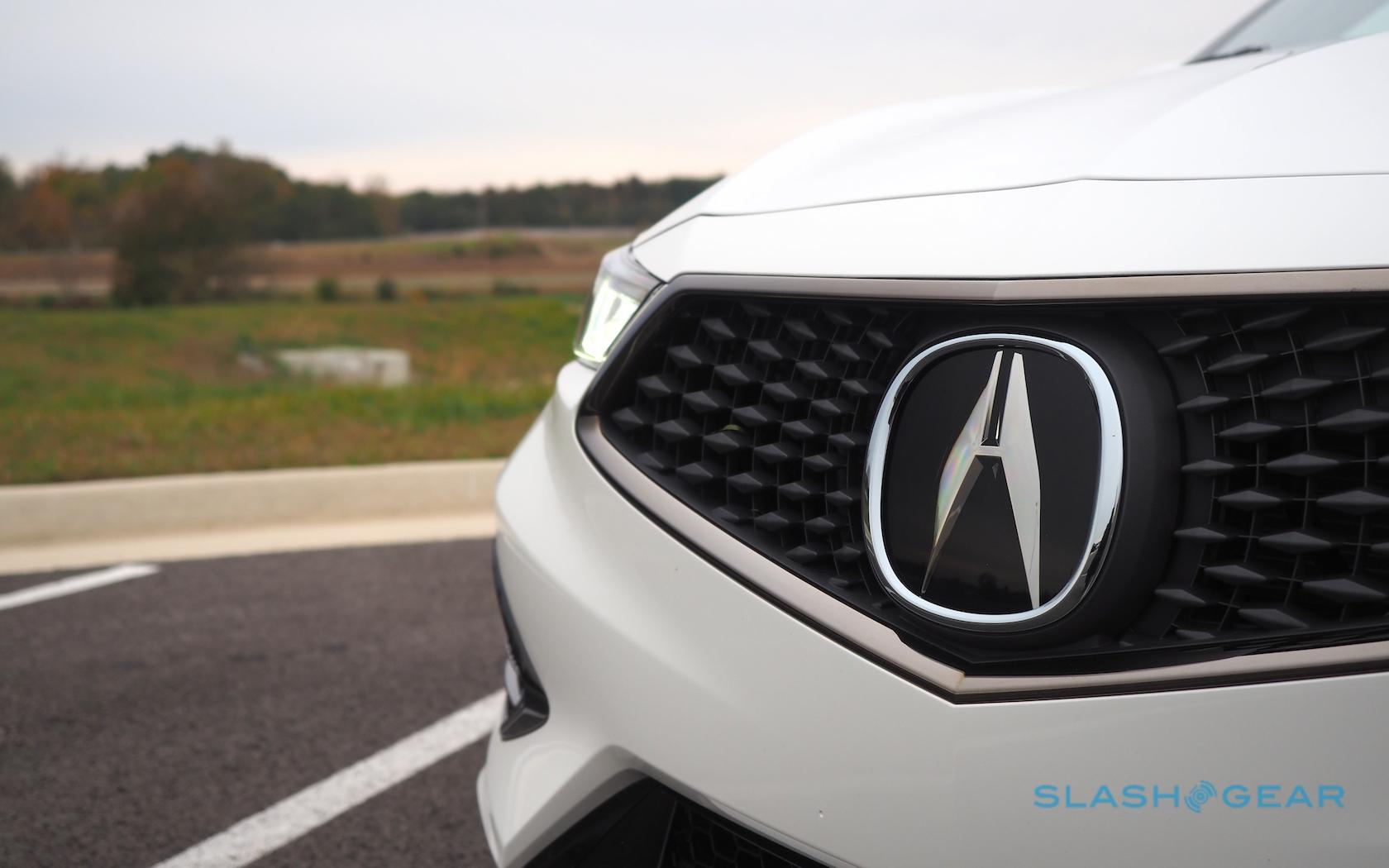 Since then, that style approach has flourished through Acura’s line-up, finally arriving at what’s arguably the automaker’s most important car. The 2019 ILX is the cheapest Acura you can buy new – it now starts at just $25,900 (plus $995 destination). Its value, though, puches far higher.

Like so many small luxury cars, it’s the gateway to the brand for new customers. In the case of the ILX specifically, the car also has the highest percentage of millennial owners in the segment – and for Acura overall. Get the ILX experience right, therefore, and it could ensure a captive audience of loyal drivers for decades to come.

With that sort of responsibility resting on its shoulders, the new ILX can’t afford to stumble. Happily the exterior re-style has been a huge success. If the old car was growing bland in the face of increasingly bold rivals, 2019’s model closes that gap again. 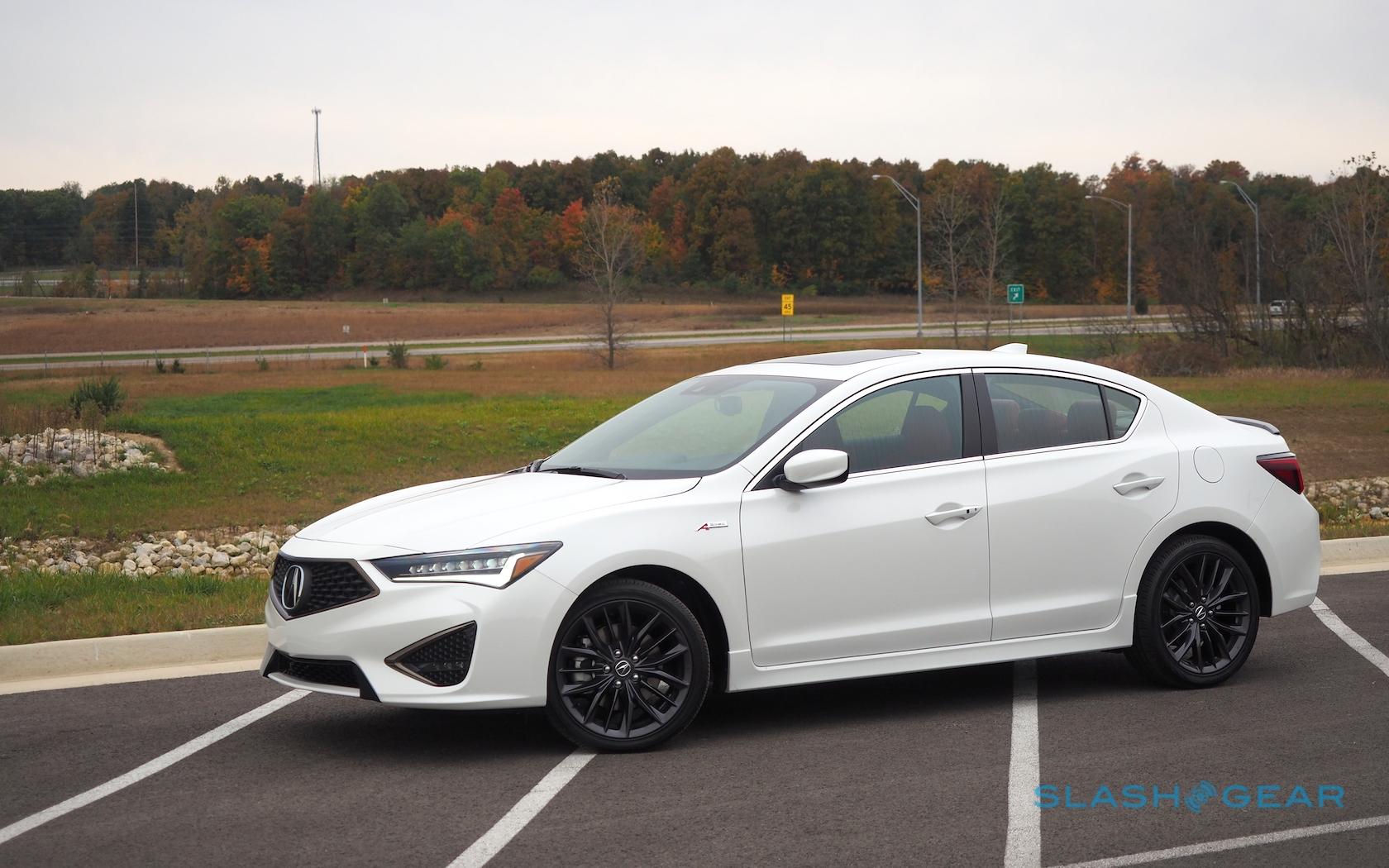 At the front that means the new family grille and a larger, prouder badge. It’s flanked by an updated version of Acura’s “Jewel Eye” headlamps – now with seven individual LED segments – and distinctive, swooping daytime running lights. The front fascia is new, too, cleaner and more balanced, while the hood has gained more sculpted lines.

The back, meanwhile, cleans up nicely too. Dropping the license plate from the trunk lid to the lower bumper instantly changes the ILX’s stance: the car looks wider at the bottom, planted confidently on the road. New LED taillamp clusters are less fussy and more shapely. Even the standard-fit 17-inch alloy wheels look good. 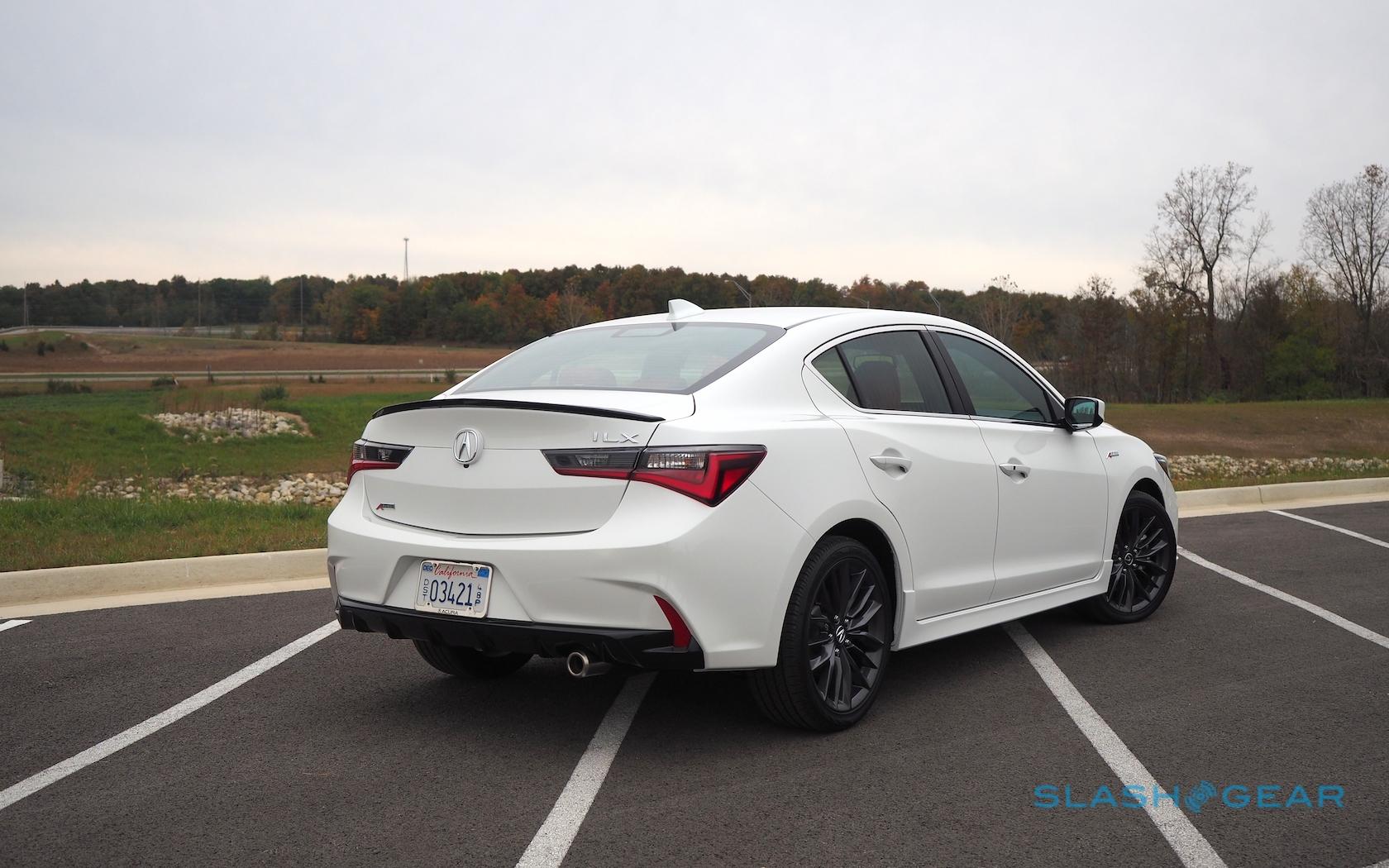 If the exterior changes are dramatic, Acura’s interior treatment for the 2019 ILX is a little more subtle. Certainly, there’s the possibility for something more in-your-face: a red interior option, with leather and Ultrasuede inserts, is now available on the ILX A-Spec. The other new option, Espresso brown, is a little less aggressive. 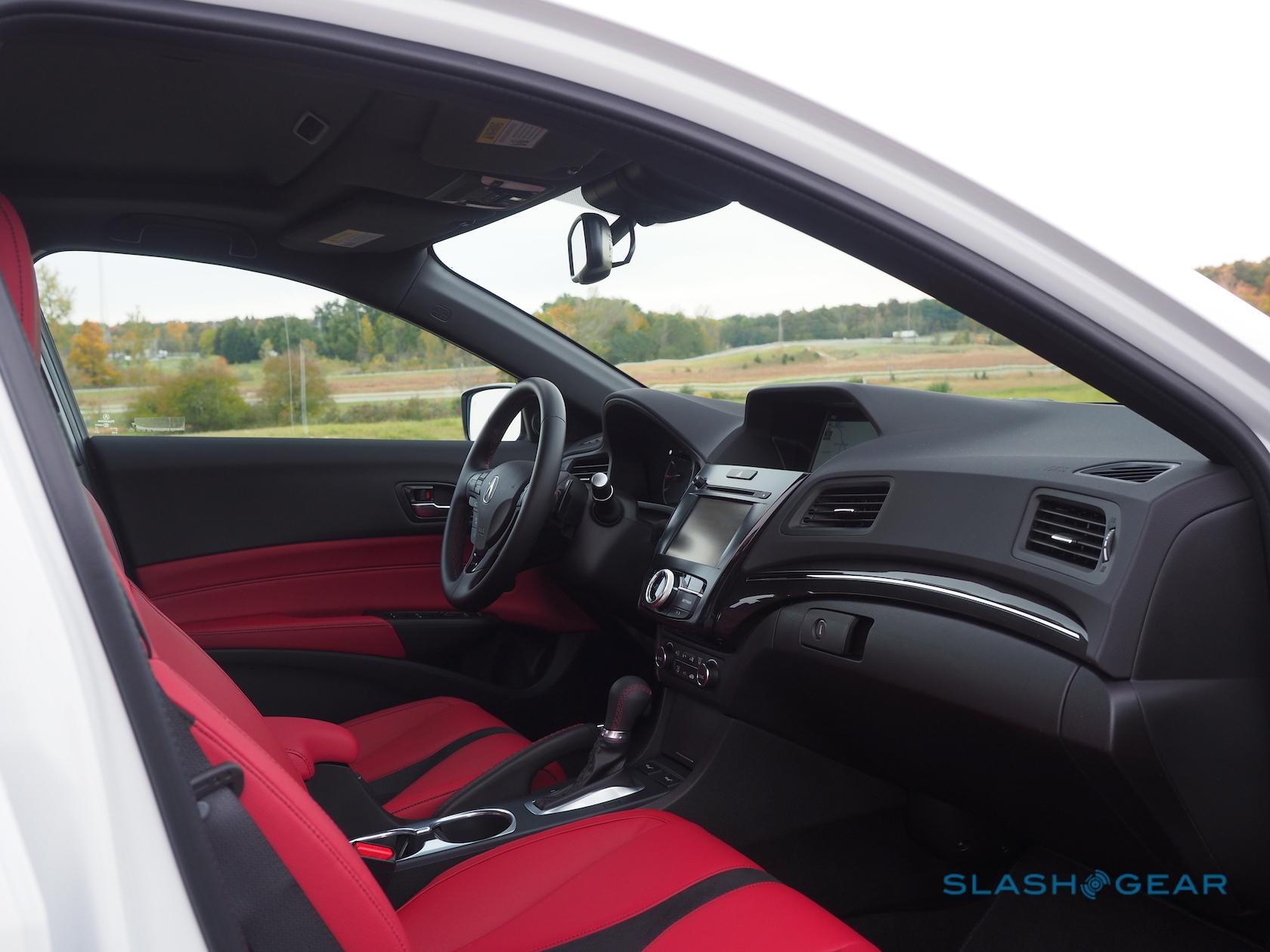 Acura gets the basics right. The seats are comfortable and well-bolstered, with 10-way power adjustment as standard on the driver’s side. Even the base ILX comes with a leather-wrapped steering wheel, power moonroof, keyless entry and start, dual-zone climate control, heated front seats, and a multi-view reversing camera.

The 2019 ILX Premium throws in Apple CarPlay and Android Auto, leather sports seats, blind spot warnings, an upgraded audio system with subwoofer, SiriusXM, rear cross traffic monitoring, and 4-way power adjustment for the front passenger seat. Then there’s the ILX Technology trim, with navigation, real-time traffic, and Acura’s ELS 10-speaker audio system. Either the Premium or the Technology trims can be had in A-Spec form. 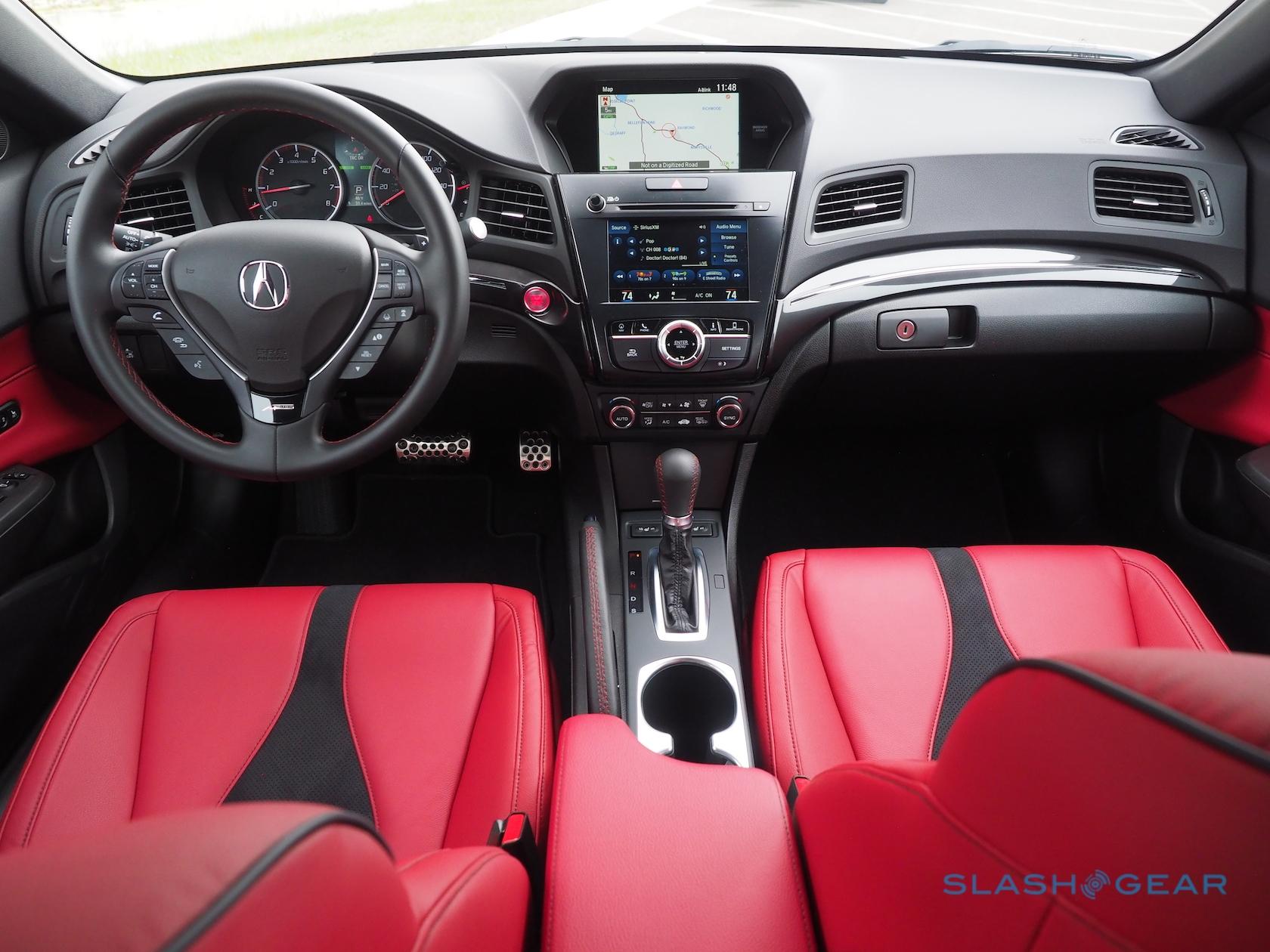 It’s a well-equipped car, then, particularly for the price. All the same, I can’t help but wish that Acura had spent a little more on the dashboard finish. There are plenty of buttons and dials – too many, some might argue – along with Acura’s twin display infotainment system. The bottom panel is a touchscreen, and there’s a scroll wheel underneath that; sadly you don’t get the Acura True Touchpad control system that works so well in the 2019 RDX. 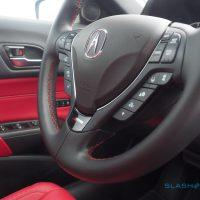 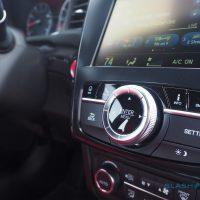 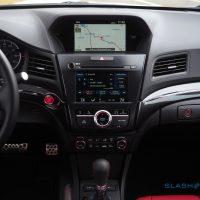 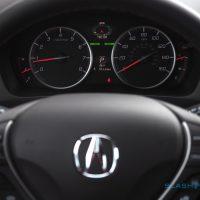 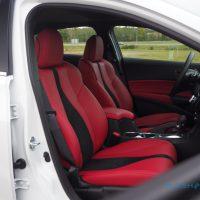 Acura says the new ILX’s touchscreen is now 30-percent more responsive, but it’s still stuck with a UI design that looks positively outdated. The switchgear feels a little plasticky, too, and some of the key touchpoints just aren’t what you’d expect from a car in the luxury segment. The steering wheel feels good, for instance, as does the transmission shifter, but the dashboard gets swathes of uninspiring trim. A Honda Civic dashboard feels nicer, frankly.

The automaker’s argument may well be that it opted to spend its money on more important areas, particularly when it comes to safety. AcuraWatch, the suite of active safety features, is now standard across every ILX trim. That’s a big deal in the category. 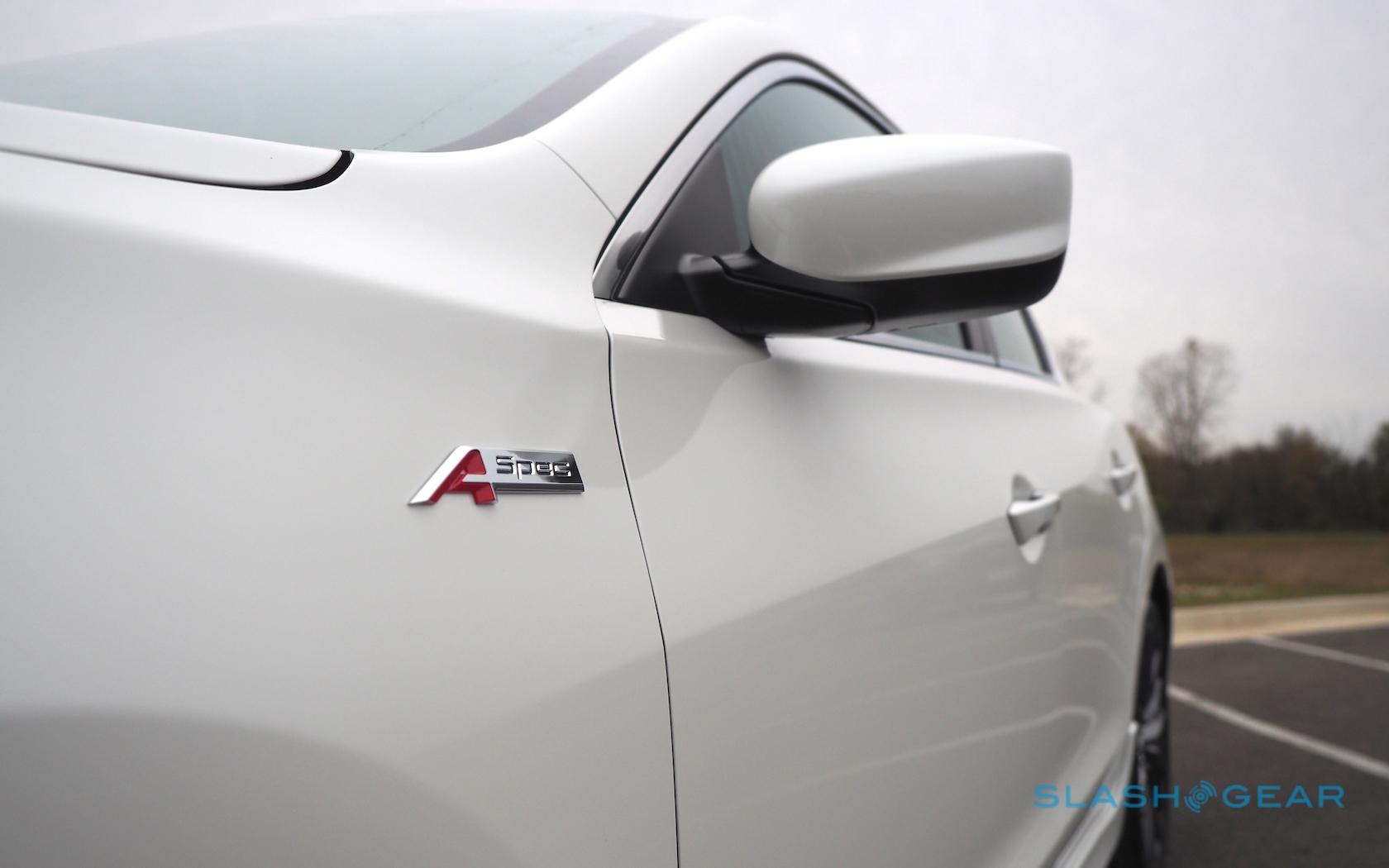 It means you get adaptive cruise control, collision mitigation, lane keeping assistance, and road departure mitigation, all without spending a dime more. To put that into context, if you want those features on a comparable Audi A3, for instance, Acura says you’re looking at $8,750 more on top of the car’s already more expensive $31,950 price tag. 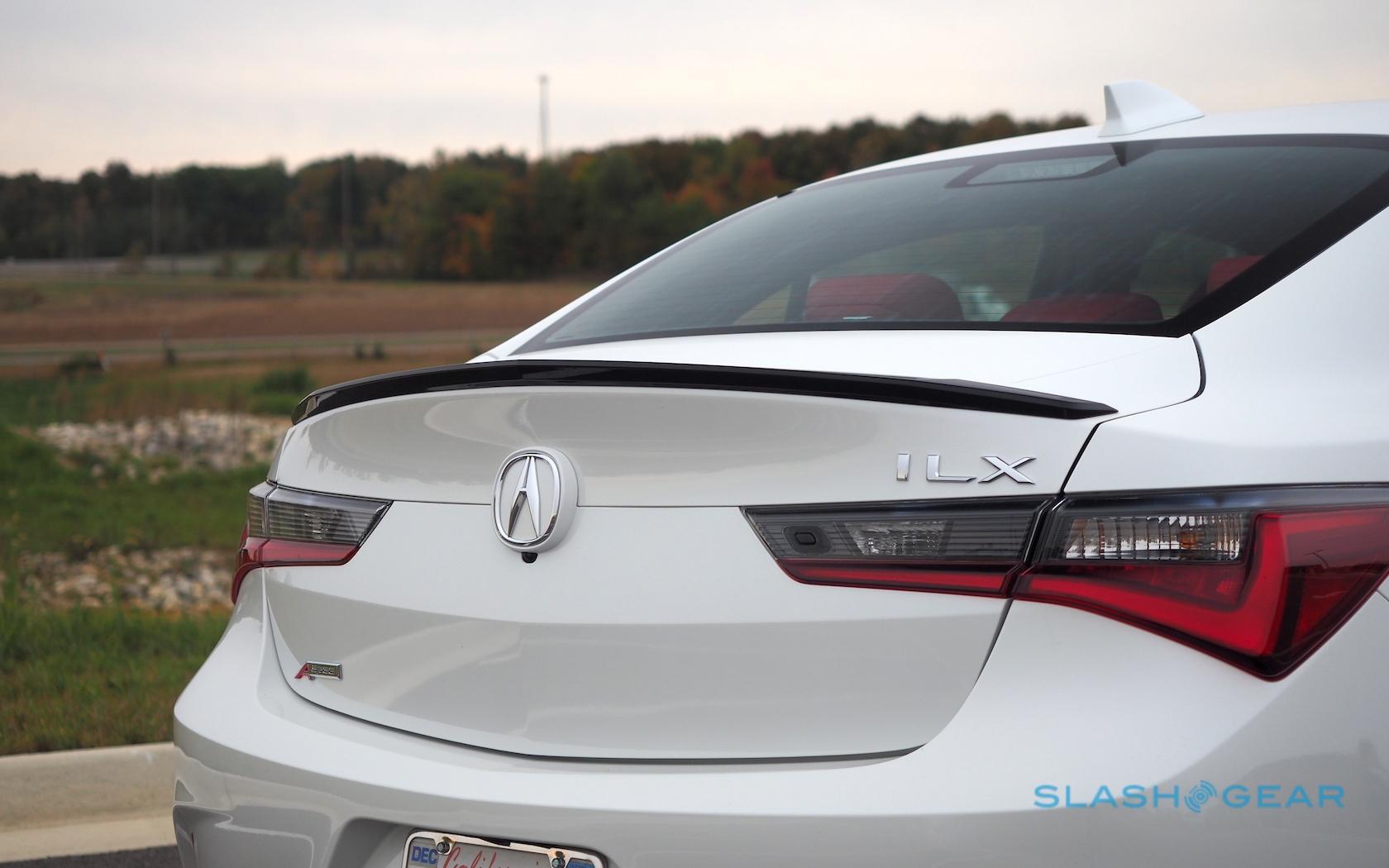 I spent my time on the road in an A-Spec car, though apart from the slightly larger wheels there are no mechanical changes which should affect the driving feel compared to the rest of the ILX line-up. Acura had invited us out to Columbus, OH, our drive route effectively in the shadow of some of its biggest facilities – including the exclusive factory where it hand-builds the NSX. On the road, the ILX wasn’t quite up to supercar levels, but it can still be engaging all the same.

The four-cylinder engine is punchy and eager, eschewing the turbocharger that’s fashionable in the segment to stick with natural-aspiration instead. With the transmission in “D” the car prefers to cruise; for the sweeping country roads and occasional tight corners, I far preferred the 8-speed in “S” mode, which left the ILX feeling more enthusiastic. 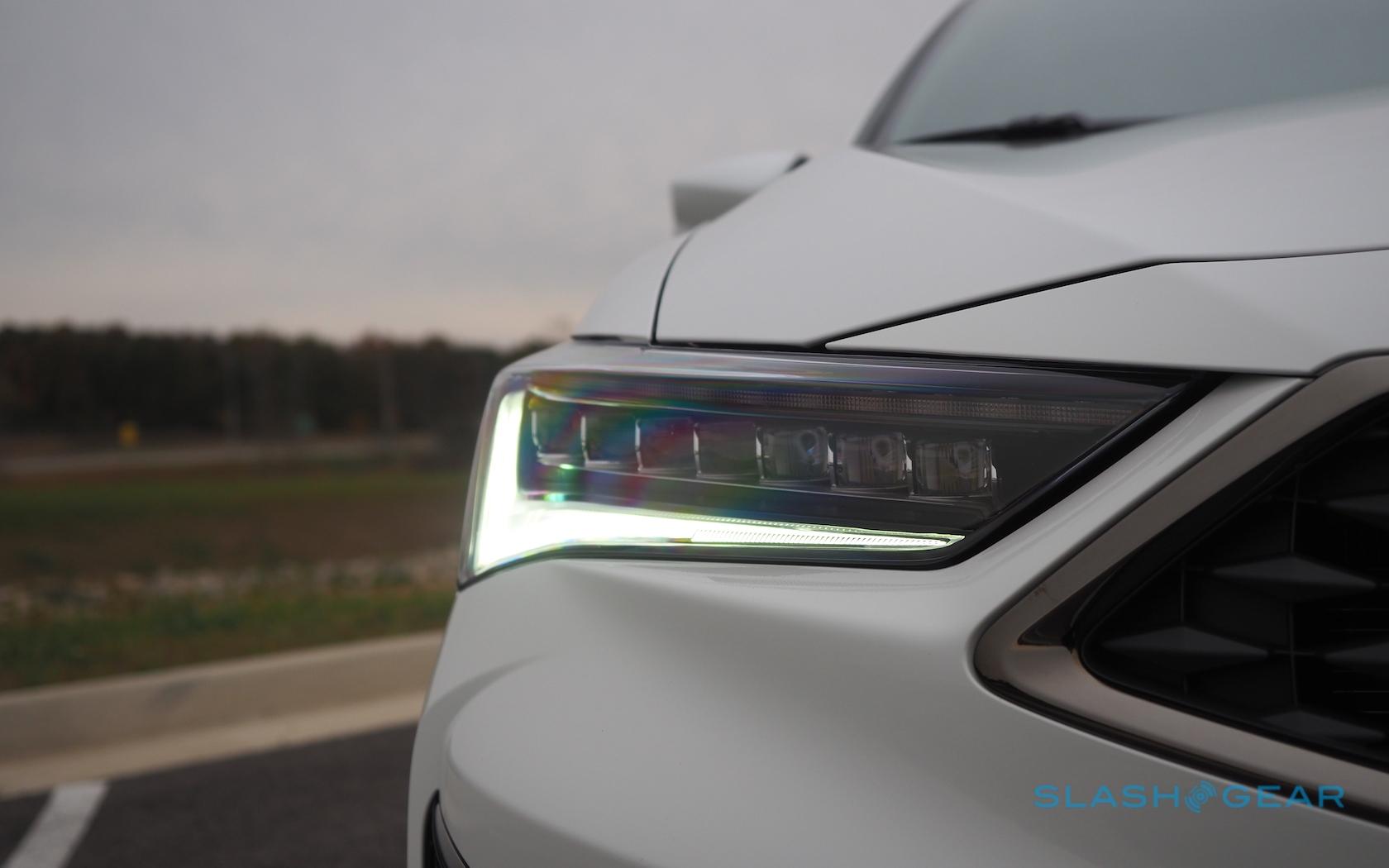 There’s no SH-AWD, Acura’s all-wheel drive system, but the ILX often corners like nobody told it that was missing. Power is put down via the front wheels, and there’s a pleasing urgency – especially if you’re willing to snap the satisfying paddle-shifters yourself – that adds up to great everyday usability. In Sport mode, the ILX won’t even trip the transmission back into automatic after a period of time, a common complaint in many so-called sports sedans.

As a refresh, of course, Acura is limited in how it can address some of the lingering qualms about the ILX. Headroom inside is still fairly tight, and the 12.3 cubic feet of trunk space is fairly pokey for the segment. A more convincing dashboard is probably the most pressing demand, but something which will have to wait for an all-new car. 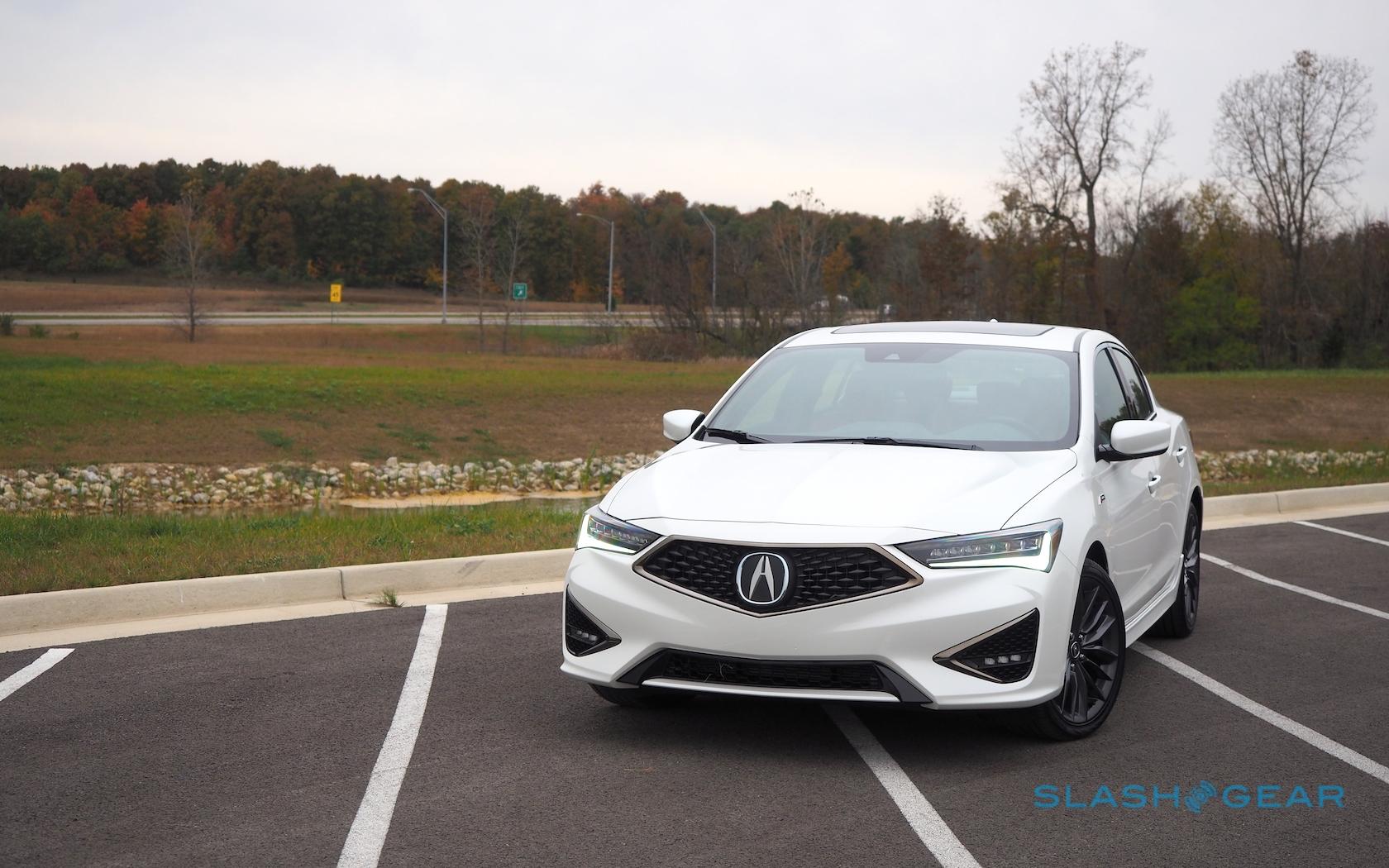 Nonetheless there’s plenty to like about the 2019 ILX. No, it’s not going to set your hair alight behind the wheel, but I think that’s fine for the category. The old ILX always did well on the asphalt, but it never looked the part. With the diffident styling gone, and Acura’s new and distinctive corporate snout in place, the ILX is far more memorable both from the front and the rear.

Badge snobs may still prefer the Audi, BMW, and Mercedes-Benz alternatives, but they’ll need to dig deep to match Acura’s fiercely competitive pricing. The standard-fit AcuraWatch active safety tech is, in particular, something the rest of the auto industry could do worse than to copy. That, and the sticker price, helps keep the 2019 Acura ILX competitive in a segment that is only going to get more important.