McLaren’s Sports Series is gaining a third bodystyle, with the 2018 McLaren 570S Spider chopping off the roof so you can really hear the twin-turbos sing. Based on the original 570S Coupe, the Spider packs a retractable hardtop that splits into two, folding into the bodywork in just 15 seconds. Drivers will be able to operate it at up to 25 mph.

Courtesy of lightweight composite materials, the overall weight increase is fairly minimal compared to the fixed-roof Coupe. In fact, it’s just 101 pounds heavier, and McLaren says that there’s no change in structural rigidity. That’s aided by the carbon-fiber MonoCell II chassis, of course. 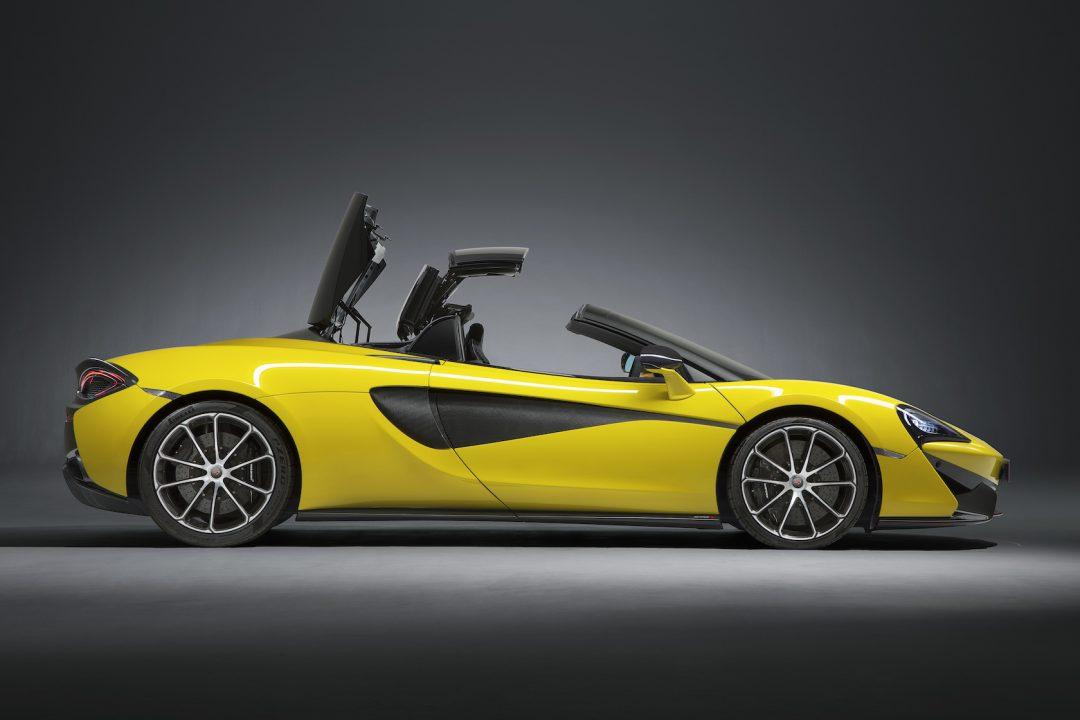 Drop the roof, and a glazed wind deflector can motor up to help cut wind-buffeting. It can also be opened even when the roof is up, for extra ventilation. An optional sports system has an ESG that channels exhaust sounds to the cabin, routed underneath the tonneau cover that pivots out of the way to accommodate the folded roof panels.

As you’d expect, the 3.8-liter twin-turbo V8 M838TE engine is carried over from the Spider’s coupe sibling. It’s good for 562 horsepower and 433 lb-ft. of torque, and paired with a 7-speed seamless-shift gearbox. The steering is electro-hydraulic power-assisted, and there are independent adaptive dampers with a choice of Normal, Sport, and Track modes. 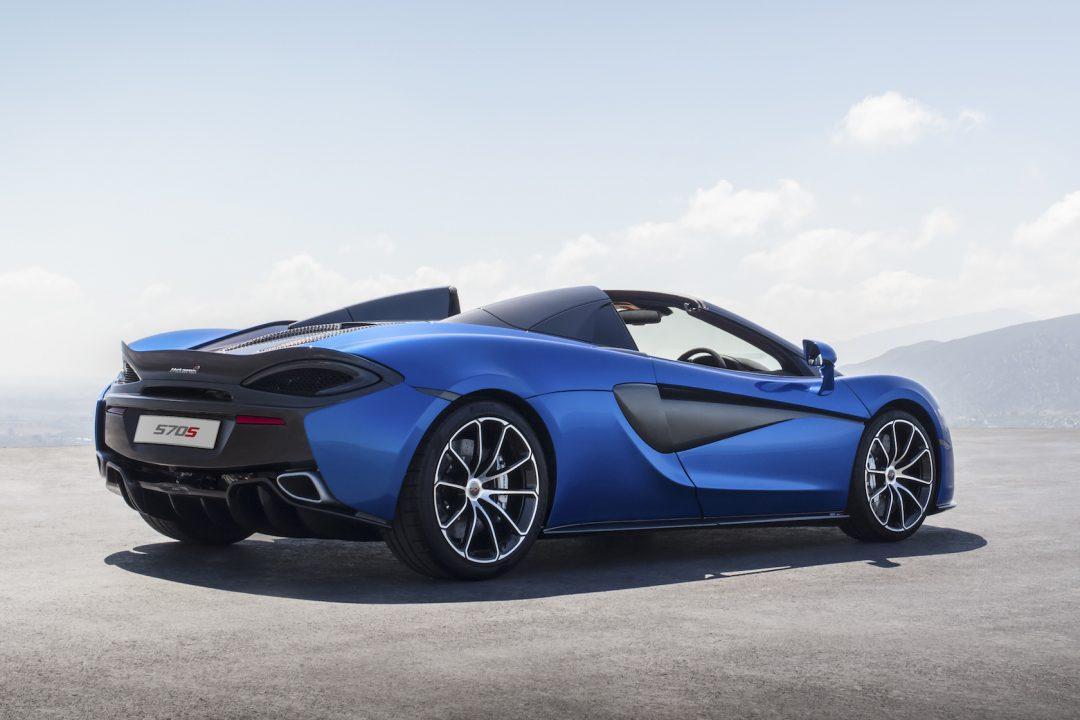 Carbon ceramic disc brakes are fitted all round, with 6-piston aluminum calipers at the front and 4-piston at the rear. Altogether, you’re looking at a 0-60 mph time of 3.1 seconds and a top speed of 204 mph. If there’s a compromise for going topless, it’s that the top speed with the roof retracted drops to a “mere” 196 mph. Either way, McLaren says the 570S Spider should do 16 mpg in the city, 23 mpg on the highway, or 19 mpg combined; admirable numbers for a car of its ilk. 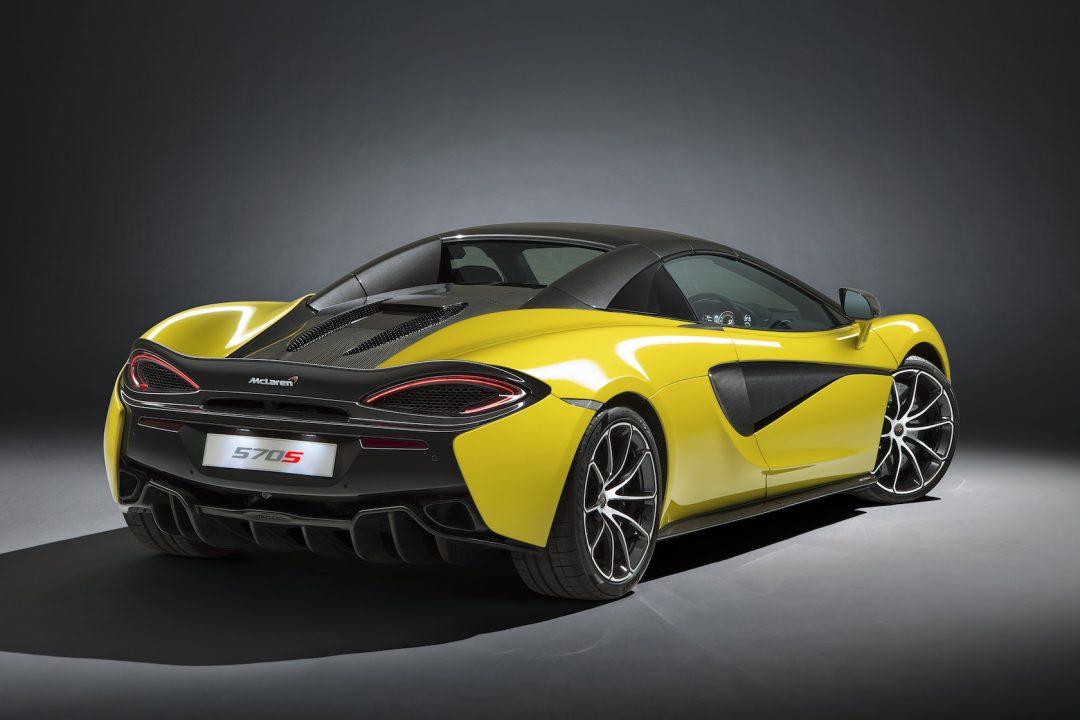 Still, you’re probably more interested in the drama. Visually, that’s there courtesy of McLaren’s dihedral doors, which swing up rather than out, and a slightly extended spoiler. The latter is half an inch higher than that of the 570S Coupe, compensating for the change in the car’s body shape and its impact on aerodynamics. As standard it’s finished in Dark Palladium grey, though the McLaren Special Operations team will happily switch that out for visible carbon-fiber for an extra fee. 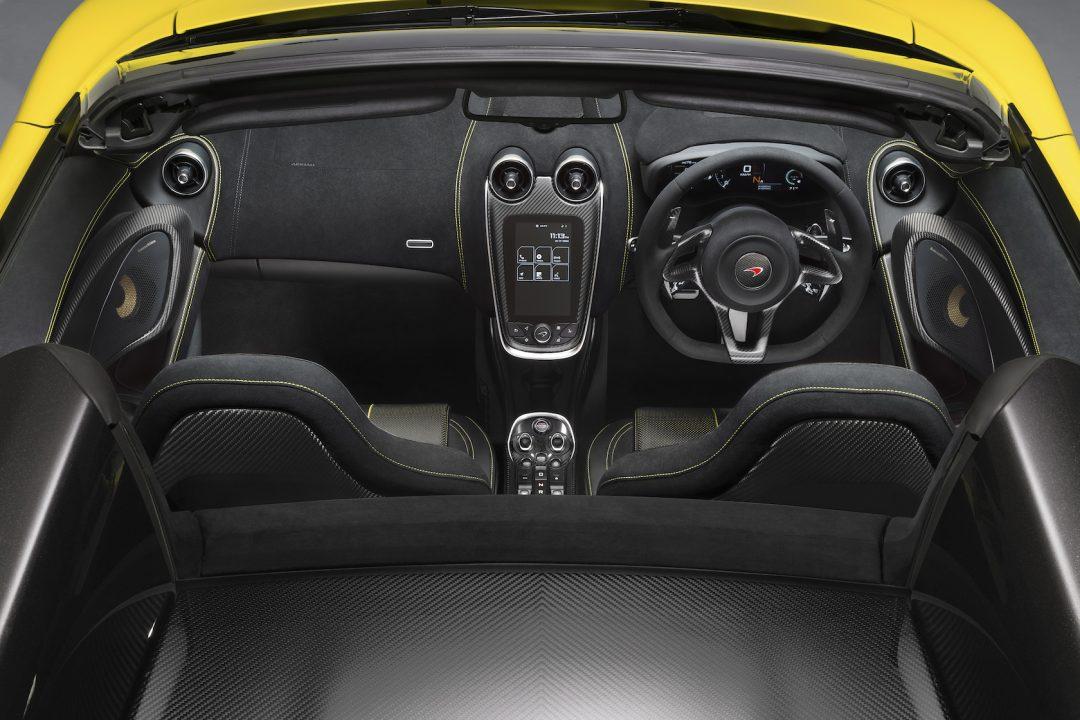 The cabin, meanwhile, has a choice of six-way adjustable or eight-way adjustable memory seats, with either Nappa leather or Alcantara trim. The carbon-fiber-shelled sports seats from the McLaren P1 can also be specified. All of the driver’s instrumentation is digital, on a 10-inch display, while a 7-inch touchscreen in the center stack runs McLaren’s own IRIS software for climate control, navigation, and infotainment. 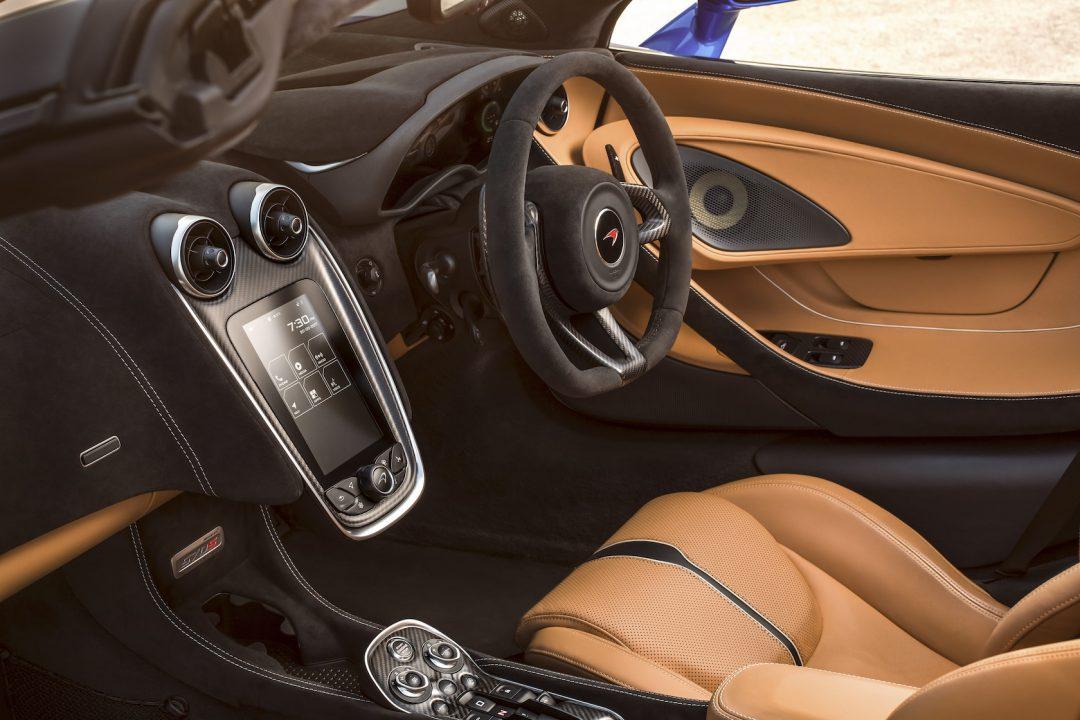 McLaren is adding three new colors to the paint options: Curacao Blue, Vega Blue, and Sicilian Yellow. That takes the total number to 20 in all. Meanwhile there’s also the option of a Dark Palladium grey contrast finish for the roof, windshield pillars, and rear buttresses. New 10-spoke lightweight forged alloy wheels – 19-inches up front, 20-inches at the rear – are optional too, and you can have the brake calipers finished in Liquid Black.

How much will this open-air performance monster set you back? The first 400 570S Spiders will be “launch edition” models, and the car is available to order now from $208,800. Hand-built, they’re expected to be delivered from September this year.