Acura is three decades old, and with the 2018 TLX it’s looking for like-minded Millennials. Latest in the automaker’s line-up to bear the redesigned corporate grille, the new TLX also debuts an A-Spec version that builds on that nose-job with a sharper, more aggressive body kit. Acura‘s target is clear: it wants to be the sports sedan of choice for youthful drivers wanting bang-for-their-buck that the Germans just don’t deliver.

There’s plenty said about the value of a “halo car” like the NSX, but according to Acura it’s not just lip-service. “When people are on our website, looking at the NSX, the number one car they go and check out after is the TLX,” Jon Ikeda, VP and general manager of Acura America. “We need to make sure that our sedans, that they’ll be looking at, have that connection.” 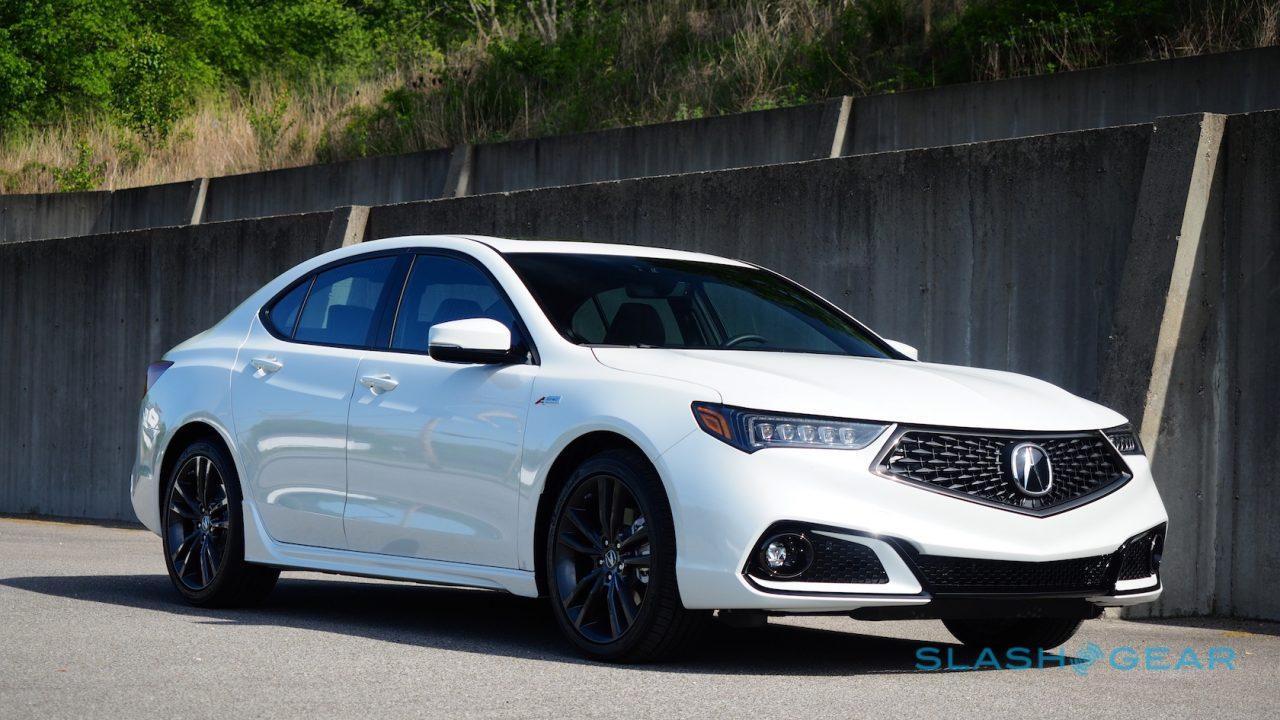 That means making the whole car more memorable. Everything from the A-pillar forward is new sheet metal. The bold new grill takes its cues from the 2016 Acura Precision Concept, replacing the plastic beak of old with a gaping trapezoidal grin. On the A-Spec TLX, it’s finished with matte black diamond mesh and a black chrome surround; not everyone who saw it like it, true, but I’d rather Acura push the envelope rather than play it safe – and invariably bland – as it has in the past.

Other changes include a new front fascia, side-sill garnishes, a rear fascia with new diffuser and 4-inch round, exposed tailpipes, and a rear spoiler. The shark-gray 19-inch wheels are handsome, while the A-Spec badging is fairly subtle. I suspect most people will opt for black or one of the silvers, but the Still Night Blue Pearl is new to the 2018 car (and exclusive to the A-Spec) and looks fantastic in sunlight. 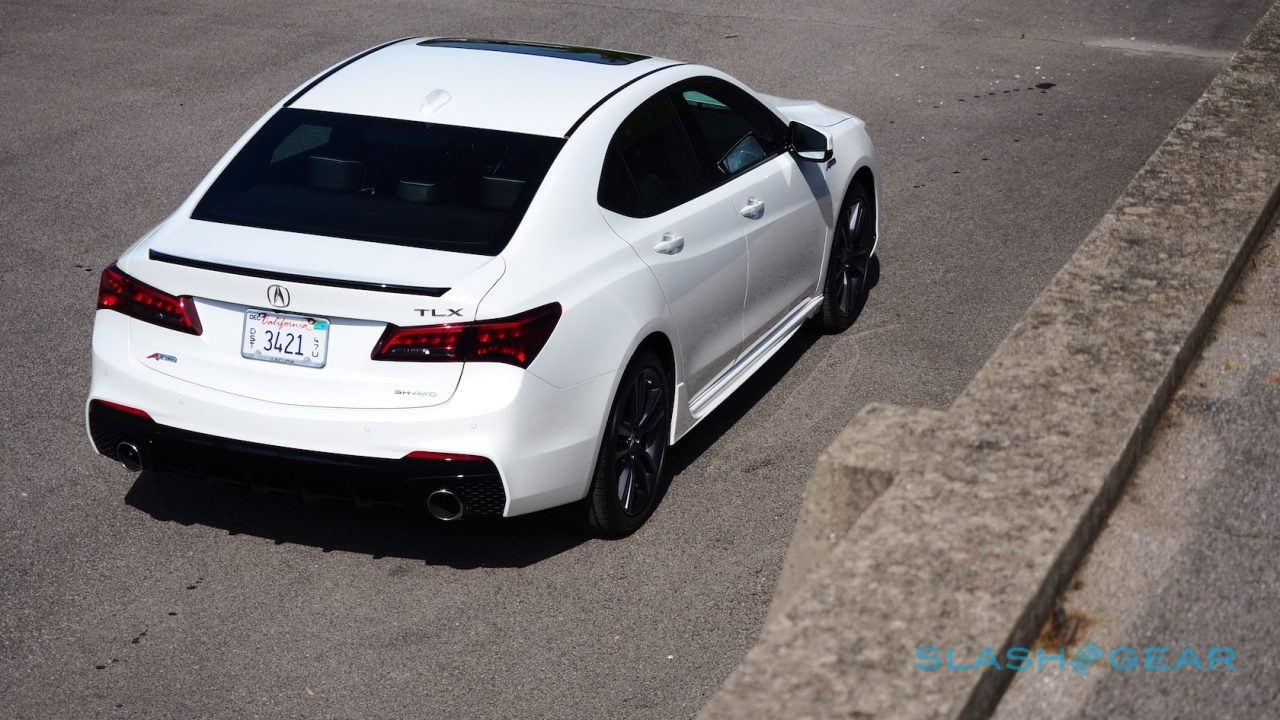 What you don’t get is any change to the engines, transmissions, or body frame. Power from the 3.5-liter V6 stays at 290 horsepower and 267 lb-ft. of torque. The TLX A-Spec does stiffen up the damping rates a little, add larger stabilizer bars, a quicker steering ratio, and throw on Michelin 245/40R19 tires with wider contact patches and stiffer sidewalls, but they’re subtle improvements nonetheless.

Indeed, the change you’ll probably notice most often is the increase in engine sound in the cabin. Acura is upfront about the fact that it’s electronically assisted – it’s tough, after all, to bring in the welcome soundtrack of hard driving while simultaneously keeping out less appreciated elements like road noise – and has doubled-down on the system for the A-Spec. Whereas the regular car uses only the front speakers for its enhancements, in the A-Spec the rear speakers join in too. 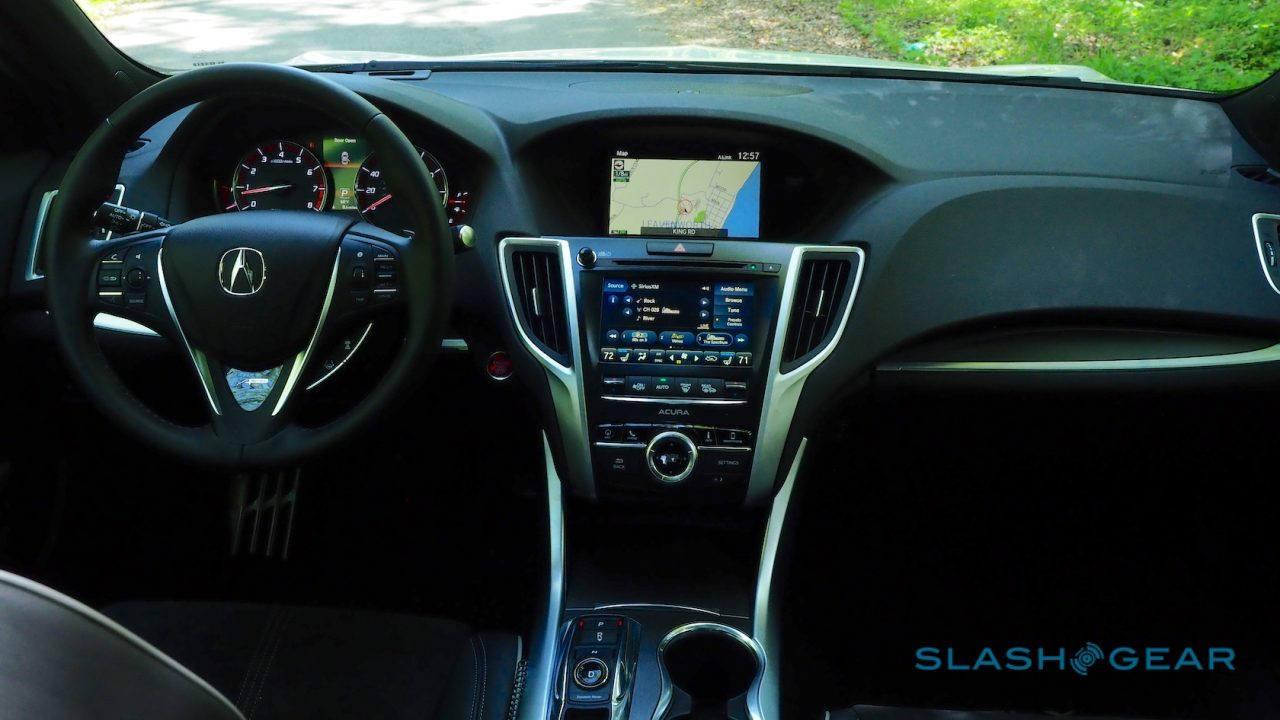 While I know purists decry the practice, Acura’s artificial enhancement is better than most I’ve heard. There’s a healthy growl under hard acceleration, but without making conversation in the cabin impossible. Moving between the A-Spec and the V6 Advance, the latter’s soundtrack seemed lackluster in comparison.

The A-Spec also has a marked improvement in steering feel over its sibling. There’s a welcome precision to the system, even if the chunky steering wheel itself is unnecessarily chubby at the 9 and 3 positions. Switch to Sport+ mode and the 9-speed automatic holds more tenaciously onto its lower gears, a welcome thing indeed considering the i-VTEC engine’s peak power doesn’t arrive until you’ve coaxed it up to 6,200 rpm. The whole thing is smooth and easy to drive; certainly on the user-friendly end of “sports sedan” spectrum, and it takes a determined right foot to unlock the full performance. 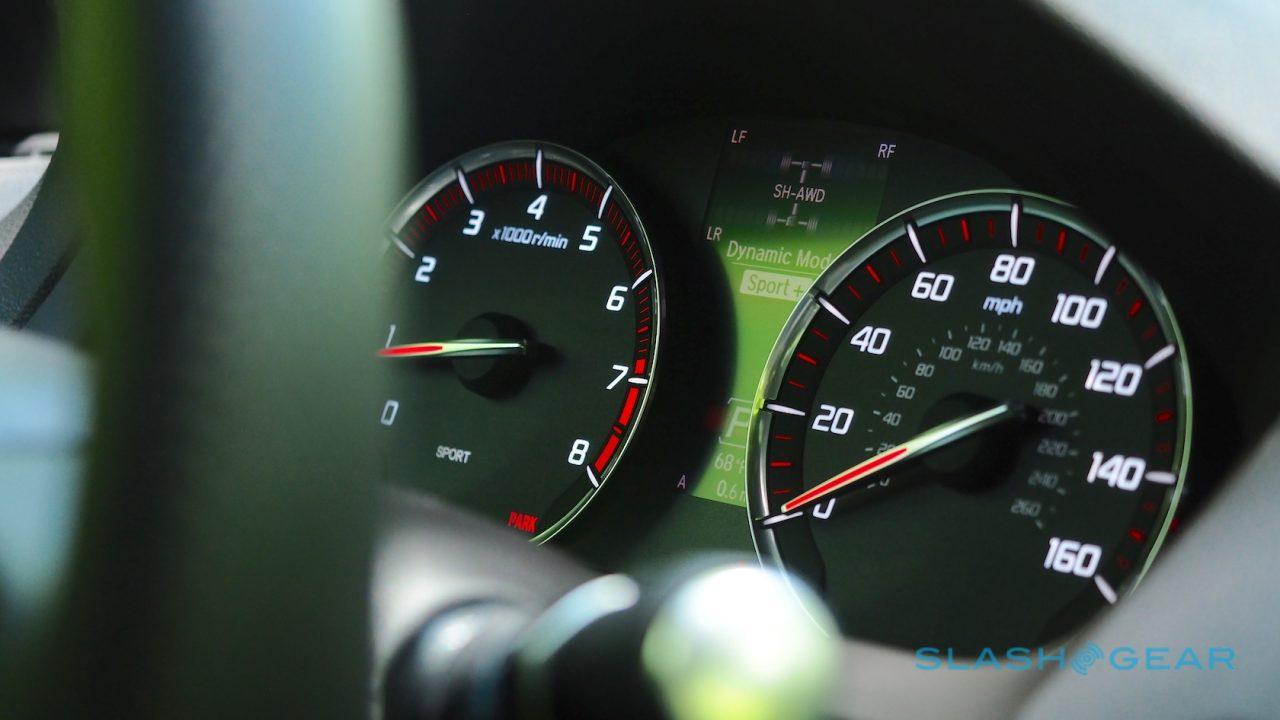 Acura’s big change to the dashboard is in its infotainment system, with the promise of swifter performance and a cleaner UI. In practice, it’s better, though it’s still not the best. Arguably the most obvious change is the glass-topped capacitive touchscreen, which is smoother under your fingertip and feels more responsive.

The performance improvements are all down to software, rather than hardware upgrades. Unfortunately, Acura tells me there are no current plans for existing TLX owners to update their own cars to the newer version. It’s a shame, because it’s definitely perkier, though the interface design itself still underwhelms with its somber colors and dated graphics. 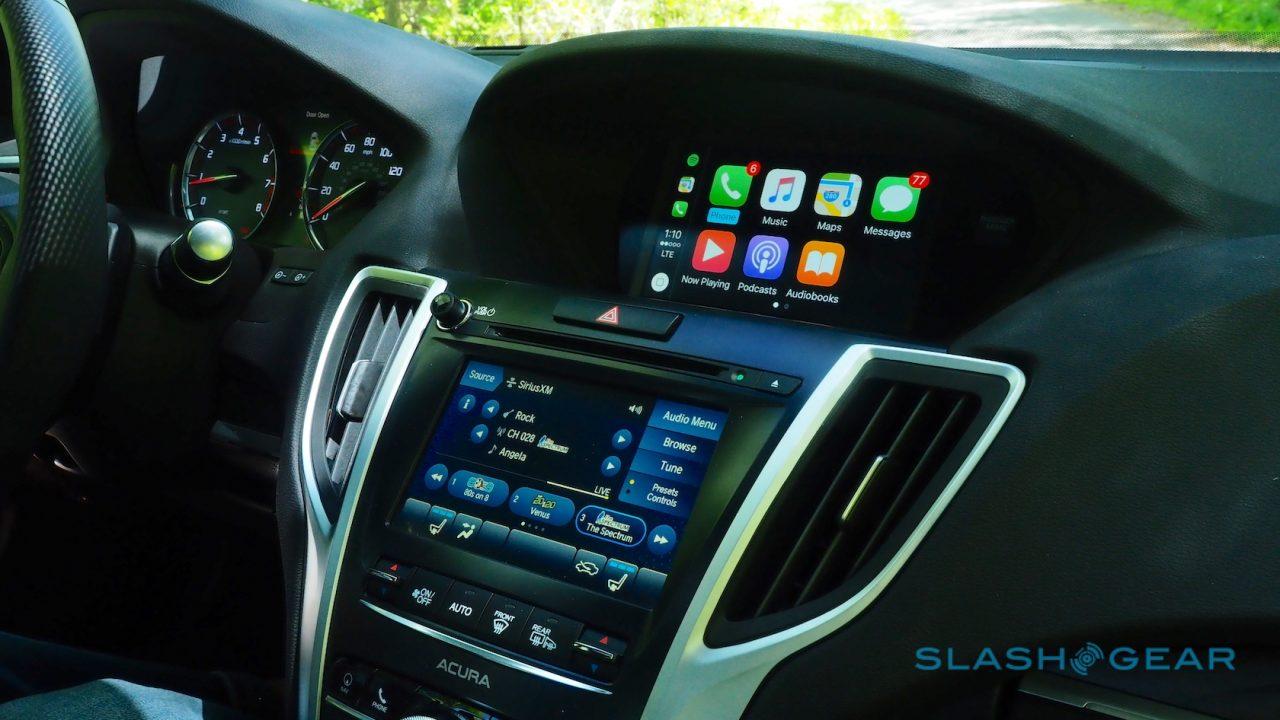 At least the practicality side has taken a big step forward. As before, you get two displays – one larger, up near the top of the dashboard to keep your navigation information closer to your eyeliner, and the second, smaller touchscreen in the center console for navigating multimedia and HVAC settings. Acura has been a little more consistent in what gets shown on what display now, meaning the standard-fit Android Auto and Apple CarPlay get to dominate the upper screen while the lower one stays dedicated to the car’s core features.

It works, though it does mean you have to navigate your smartphone-projected UI with the dial in the center stack, rather than reaching out and touching it. Sadly the ergonomically-pleasing trackpad shown off in the Acura Precision Cockpit concept still hasn’t made it to the road. There’s no head-up display option, and the LCD squeezed in-between the analog dials ahead of the driver is on the small side. 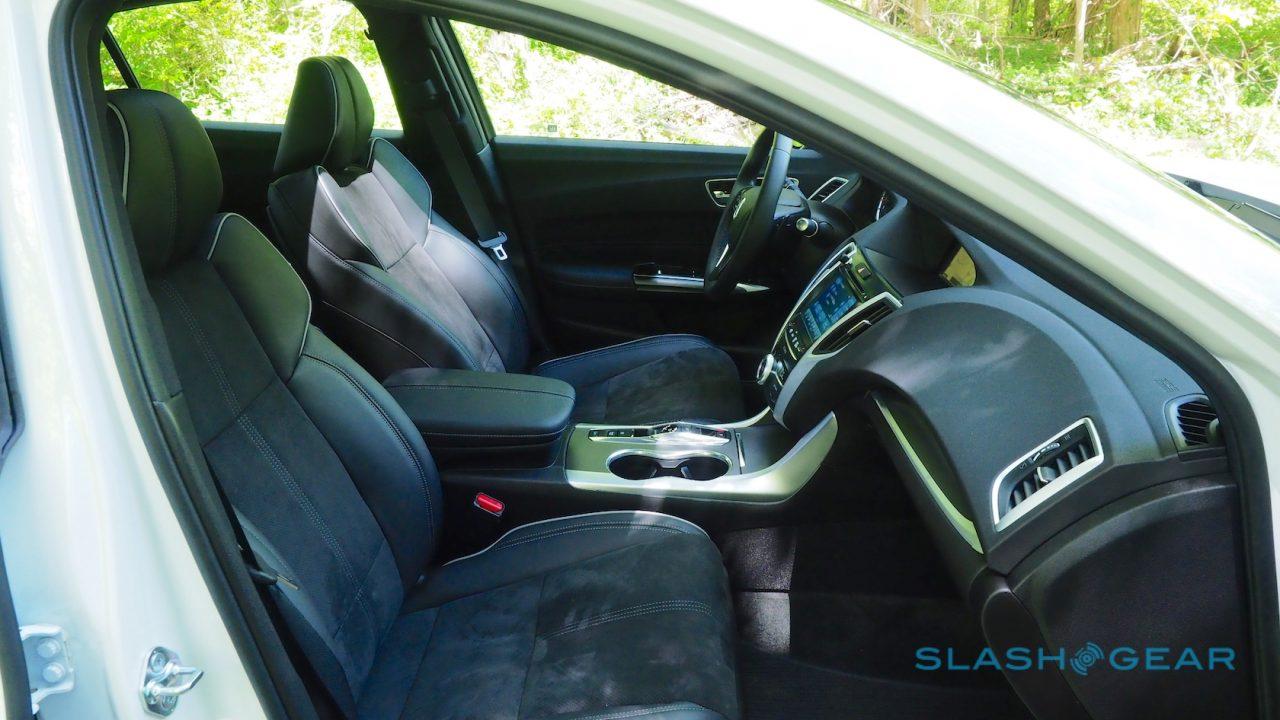 Overall, the cabin feels sturdy but not entirely inspiring. Acura’s leather and Alcantara seats are comfortable and supportive, and detailing like the contrast stitching is neatly done, but the dashboard controls still feel more plasticky than I’d prefer. It’s a testament to Honda that it has so comprehensively closed the gap in interiors between cars like the Civic and Accord and what Acura is doing; that simply raises the bar for its premium cousin.

On the tech side, it’s a mixed bag. There’s now surround-view camera vision for a 360-degree perspective of the car, and wireless phone charging in the center console, on the V6 Advance trim and up. Yet there’s no 4G LTE WiFi hotspot option, and only a single USB port.

What you do get as standard is AcuraWatch across all model-year 2018 TLX. That includes autonomous emergency braking, forward collision warning, adaptive cruise control, lane-keeping assistance, and road departure mitigation. It’s a huge amount more safety technology than rival cars offer even as paid options. 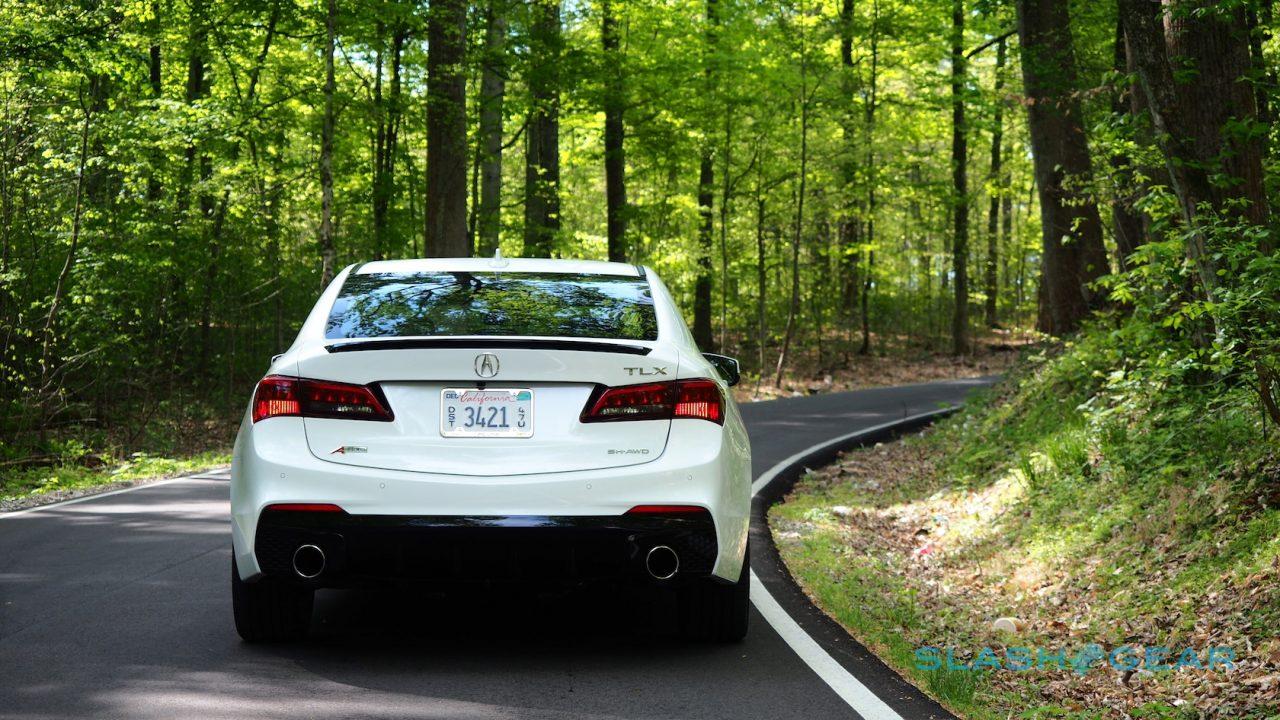 “We are recalibrating the brand, if you will, back to its roots of Precision Crafted Performance,” Acura’s Ikeda says of the 2018 TLX. “We are a performance brand, that’s where our roots are … that’s where our heritage is.” It’s not unambitious in its rivalries, either: according to the automaker, TLX buyers will be cross-shopping with Audi’s A4, Mercedes’ C300, BMW’s 330i, Lexus’ IS Turbo, and Infiniti’s Q50. 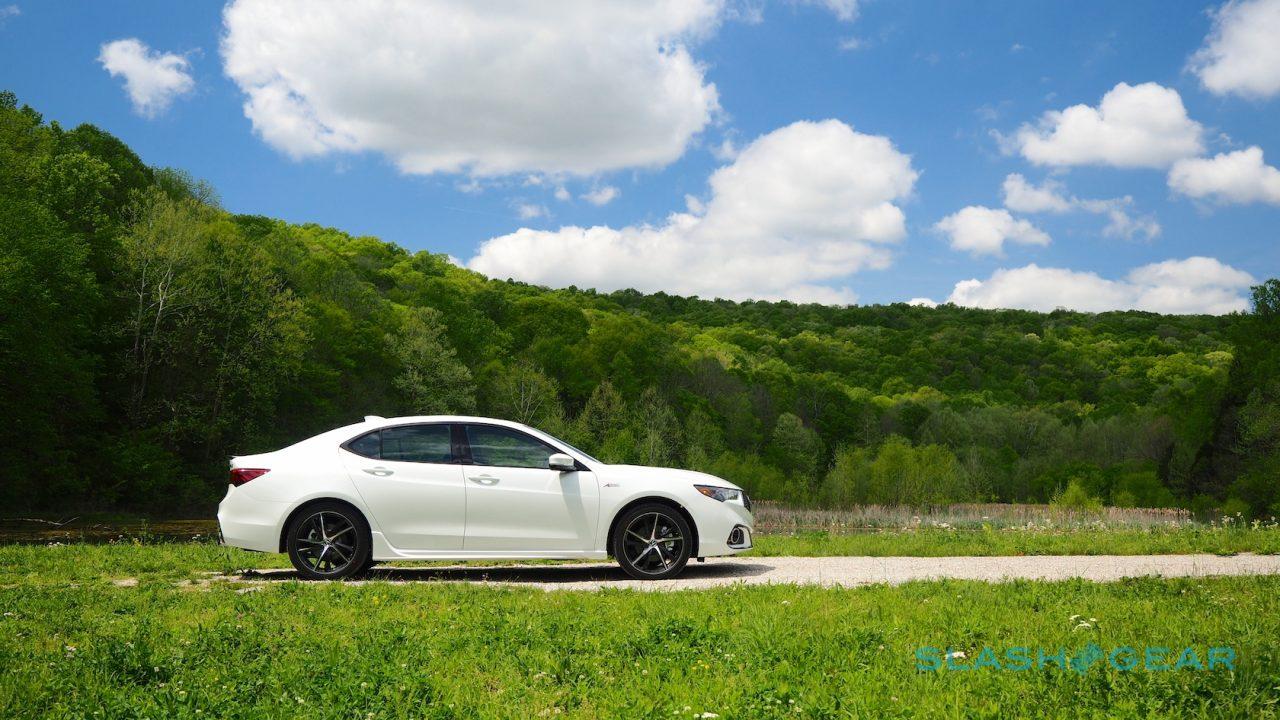 What the Acura lacks in brand cachet compared to the Germans, it makes up for in standard equipment. Some will be happy with that compromise; others will have their heart set on putting a BMW on their drive, and be willing to sacrifice luxury kit in order to do so. Personally, I prefer how the A4 drives, and while Acura points out that only the TLX offers an enthusiast-favored V6 in that bracket, the counter-argument is that turbocharged four-pots have gained traction not least for their economical gains. Acura isn’t confirming EPA economy for the 2018 car yet, but the outgoing V6 SH-AWD comes in at 21 mpg city, 31 mpg highway, and 25 mpg combined. The 2.0-liter A4 quattro beats those by 2-3 mpg.

Is the 2018 Acura TLX competitive? Yes, certainly. It’s not the clean sweep the automaker might be hoping for, but after a wavering focus it’s a welcome thing to see Acura rediscover some of what made it appealing when it launched three decades ago. Now, it just needs to expand that driving focus and enthusiasm across the rest of its range.