Jaguar knows how to make a handsome car, and the 2017 F-PACE is no different. The British automaker’s crossover borrows liberally from the design language of the slinky F-TYPE coupe and the imposing XJ sedan, no bad thing in either case, and the result is a striking and aggressive SUV. Still, the styling isn’t the only thing Jaguar poached from the F-TYPE: there’s the engine, too.

You could describe the supercharged 3.0-liter V6 as the F-PACE’s secret weapon in the crossover wars. It may “only” be the 340 horsepower version – the F-PACE S gets the 380 HP upgrade – but, in a class when many rivals make do with a turbocharged four-cylinder, there’s a lot to like about Jaguar’s personality-filled engine. You can’t argue with a healthy 332 lb-ft. of torque, either. 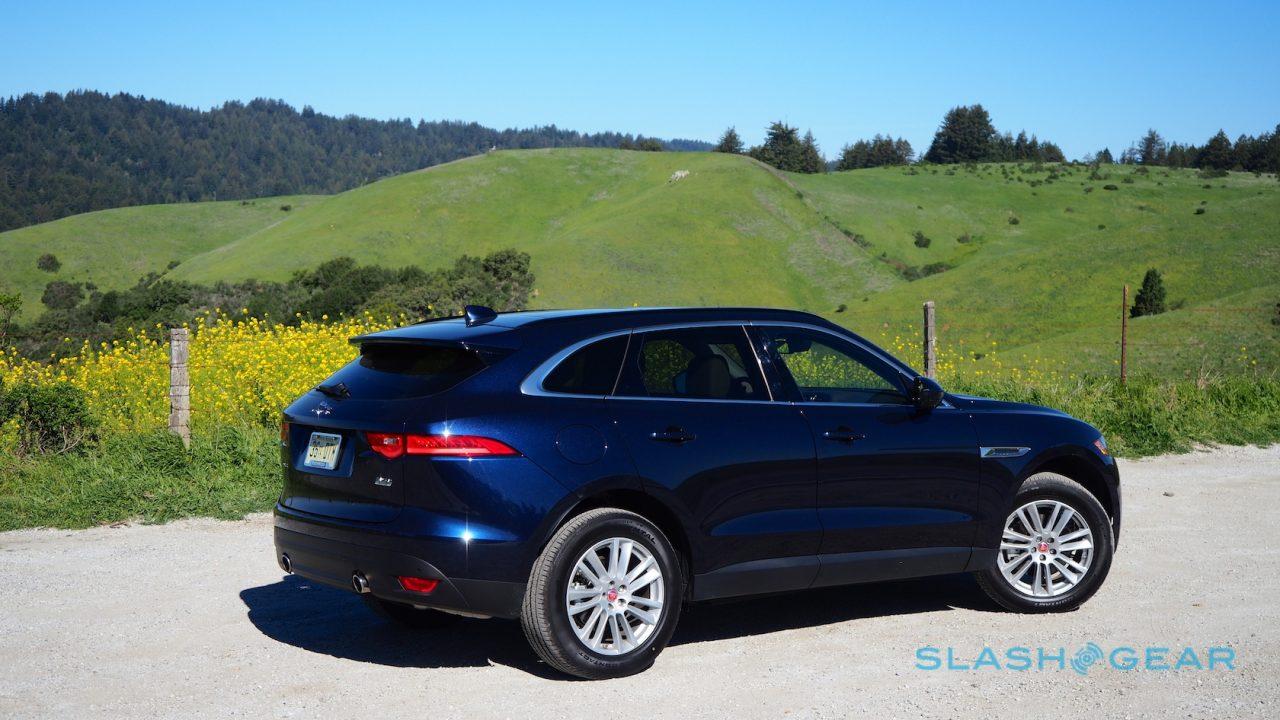 It’s all built atop the same platform as Jaguar used for the XE and XF, though the F-PACE is obviously bigger. At 186.3 inches in length, 76.2 inches wide, and 65.6-inches tall, it effectively sits across two size categories: larger than the Porsche Macan but smaller than the Cayenne. Luckily, it’s priced in line with the smaller crossover competition.

The driver gets the best deal out of the F-PACE. The V6 is a feisty, punchy thing, bubbling eagerly and with an under-key of supercharger whine. From a standstill there’s a whole lot of gear-changing going on from the 8-speed automatic transmission as you pull away, but once you’re past that the ‘box does a solid job predicting where you’ll want it to be. On the odd occasion it’s not, the plastic paddle-shifters on the chunky steering wheel may not feel especially premium but they do their job nicely. 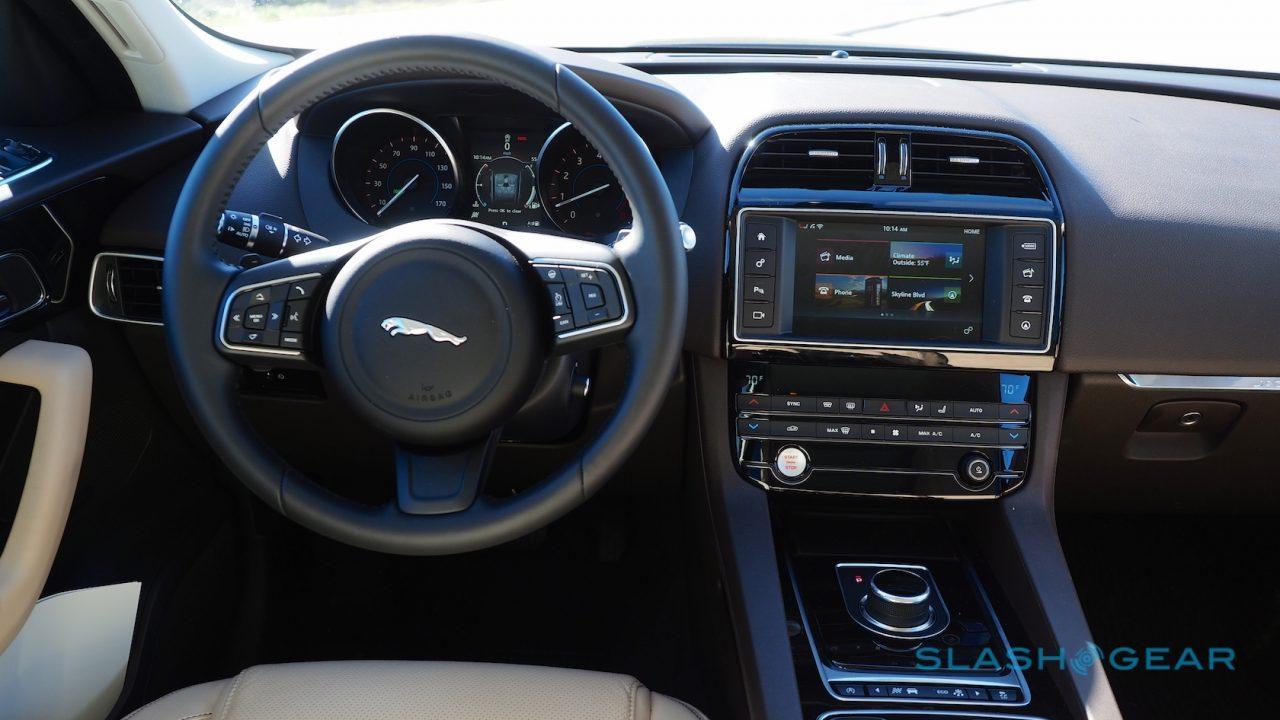 There are four drive modes – Normal, Dynamic, Eco, and Snow/Wet – toggled between with buttons in the center console. The latter two leave the F-PACE feeling like it’s wearing heavy boots, artificially curtailing your fun in the name of traction and frugality. Earnest stuff, certainly, but hardly exciting.

Normal mode is a reasonable compromise between enthusiastic driving and keeping the passengers happy. The ride errs mildly on the firm side but body roll is more akin to that of a tall wagon than most SUVs. Dynamic mode proved to be my go-to for all but highway cruising. In the latter, the F-PACE’s eager throttle response drew complaints of occasionally jerky driving in the cabin, until I toggled back down into the Normal setting. I missed the optional Adaptive Dynamics system, which adjusts suspension damping according to drive mode and driving style, and which had previously impressed me with its resulting car-like feel. 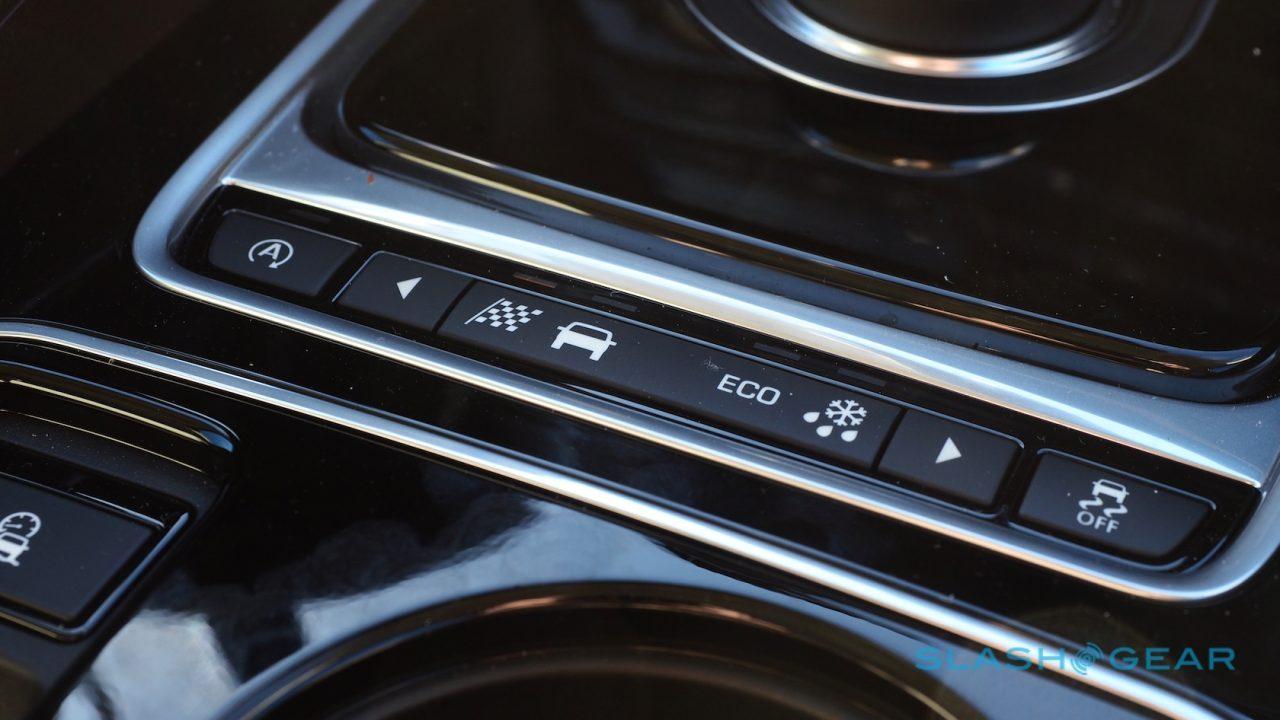 Jaguar relies on a stop/start system in part to help with its economy numbers, though while it brings the engine back online swiftly it lacks finesse. Happily you can turn it off and, unlike many cars, for back-to-back trips the F-PACE will remember your preferred setting rather than reset it each and every time; the same goes for the drive mode. In my mixed driving I saw 20 mpg on the trip computer, hitting the EPA combined figure. Jaguar quotes 18 mpg in the city and 23 mpg on the highway.

Push-and-twist the gear selector over to “Sport” mode, meanwhile, and things become a whole lot more frenetic. As in the F-TYPE, it prods the transmission into holding lower gears for longer, rousing a cacophony of engine and exhaust music in the process. Subtle, it’s not. 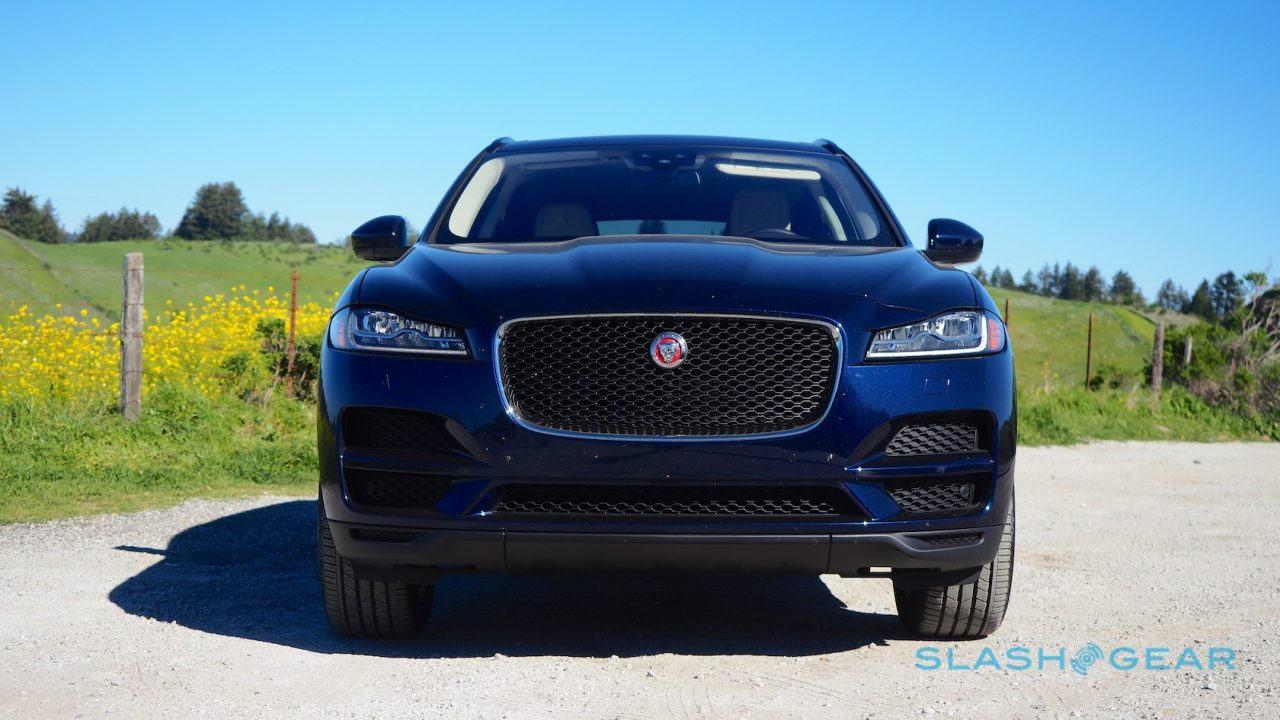 Unfortunately, while that suits the personality of a two-seater sports car, it’s not so in keeping with a five-seater SUV. For the occasional storm down a country back-road “Sport” makes sense, but it’s simply too aggressive for everyday driving. Happily the well-weighted steering and an all-wheel drive system that generally pushes the majority of torque to the rear wheels – or up to 50-percent to the front if things start to get hairy – mean even in regular “Drive” mode you’ll still see the dynamic benefits.

As for the cabin, there’s good and bad. Jaguar’s InControl Touch infotainment system gets an 8-inch touchscreen to monopolize, flanked with shortcut buttons. It’s standard-fit for the F-PACE, and includes a simple pane-based UI, navigation, and Bluetooth streaming. Optional – and not fitted to this review car – is InControl Touch Pro, which has a larger, 10.2-inch touchscreen, WiFi hotspot, and an upgrade to the Meridian audio that takes it from 380W to 825W. 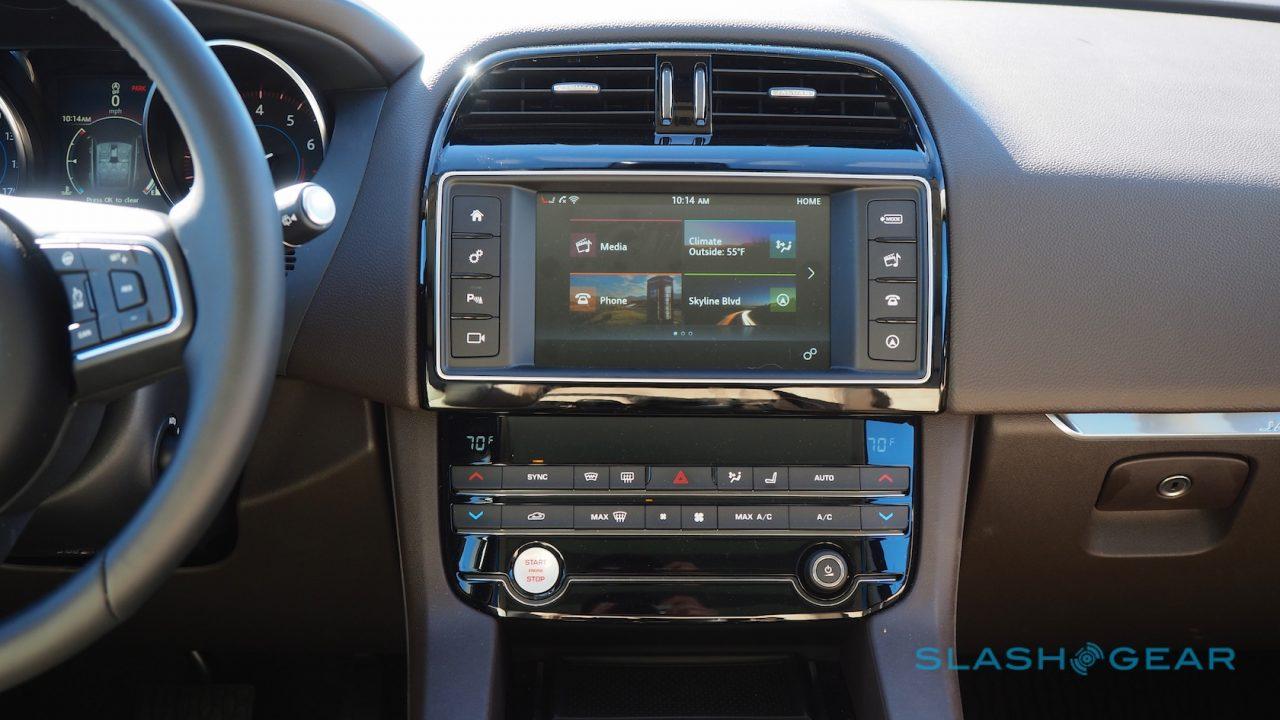 There are two good reasons why you might want to make the upgrade. For one, InControl Touch Pro is faster than the regular version, thanks to upgraded hardware. That makes a noticeable difference in responsiveness, and can mean the difference between wondering if a button-press was recognized or not. Secondly, you get the 12.3-inch virtual instrumentation, which replaces the analog dials and small LCD in the driver’s binnacle with a completely digital alternative.

Underneath, in an expanse of gloss-black, are the HVAC controls. Honestly, the lower half of the dashboard is less successful than the upper: the plastics just aren’t quite as pleasant to the touch, and the section around the gear selector feels unnecessarily barren. Switching away from a physical parking brake lever and traditional gearstick saved cabin space, but Jaguar hasn’t really done much with it. The small cubby under the center armrest feels miserly in comparison to what rival SUVs offer. 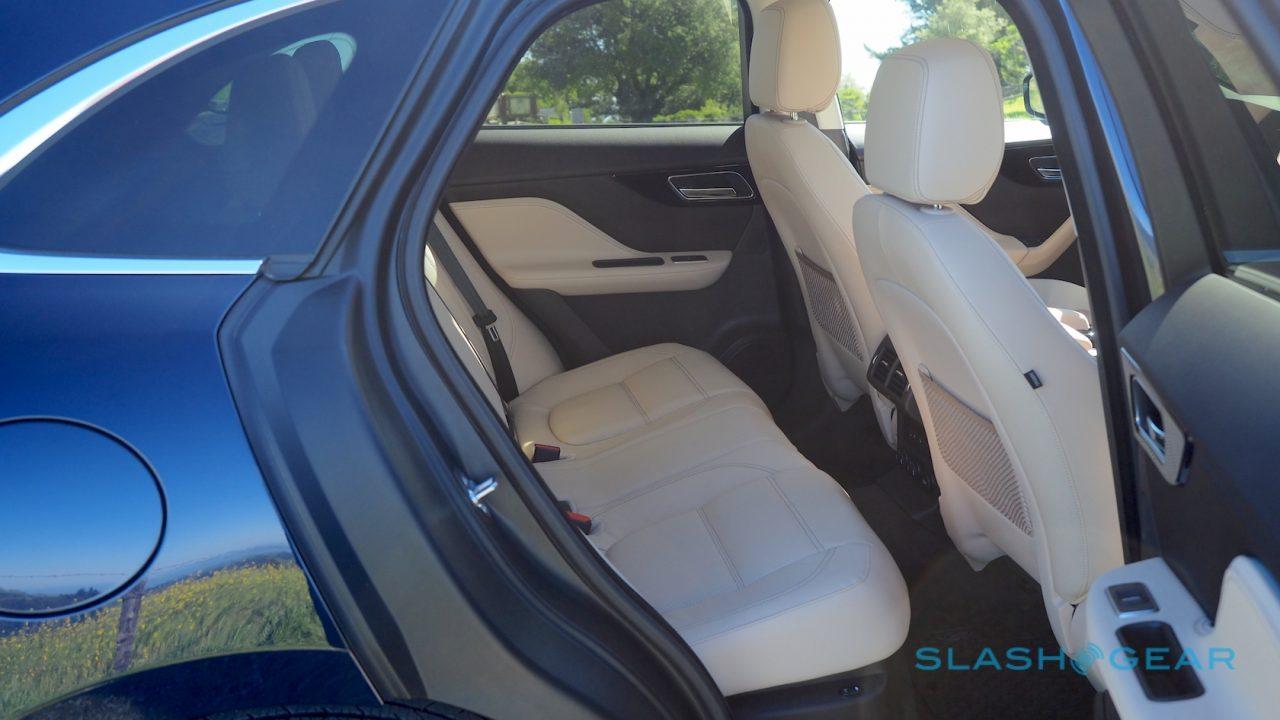 Rear space is solid for two adults or three children seated comfortably, and there are plenty of outlets and USB charge sockets to keep the typical roster of electronics up and running. Switches on the sides of the seats control the power-fold feature, and the tailgate is power-operated, too. At 34 cubic feet it’s capacious for the segment, though the F-PACE’s sloping roof line means its less practical than some if you’re transporting bulky objects. Such is the sacrifice you make for alluring Jaguar design.

Though many crossovers claim to be rewarding to drivers, few actually deliver on that boast. That the F-PACE presents such a compelling alternative to the Porsche Macan S is an achievement in and of itself. I suspect the Jaguar has a little more on-road personality to go with its extra space; the Porsche, in contrast, has teutonic efficiency and a more refined cabin. 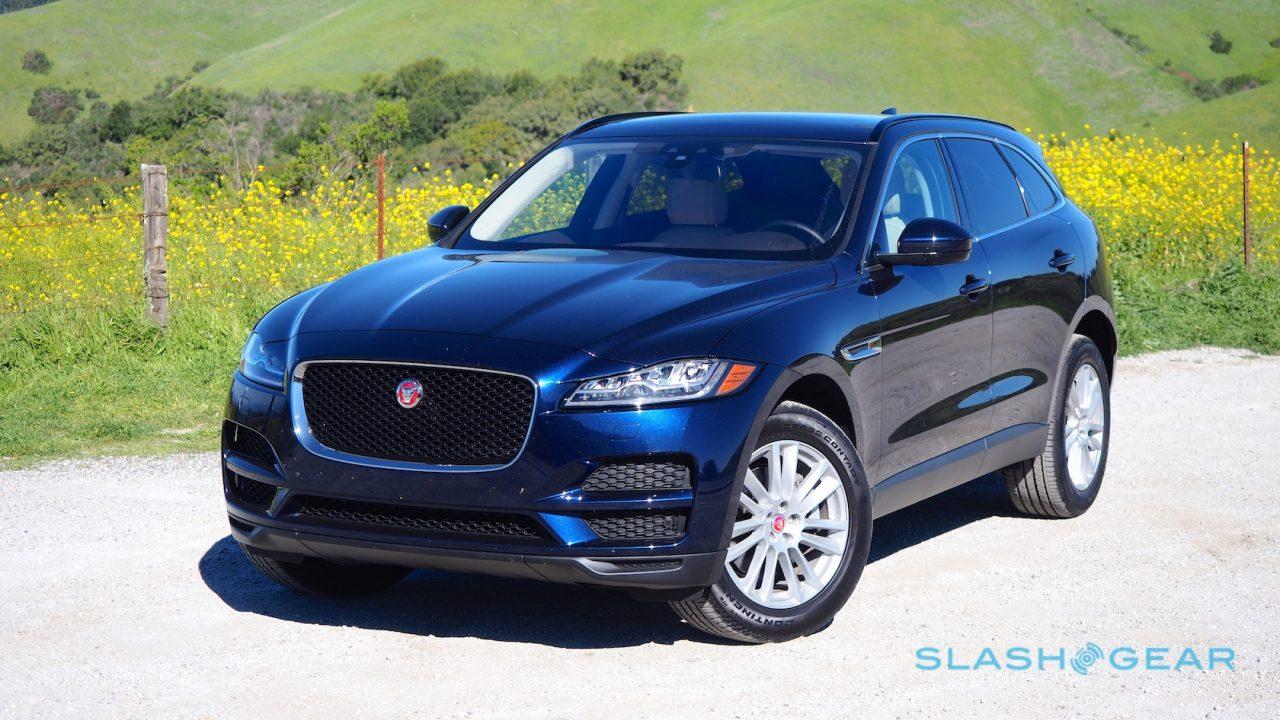 Kicking off at $51,100, the F-PACE 35t Prestige climbs rapidly when you throw in the $2,100 Vision Package (with its full LED adaptive headlamps, blind-spot monitor, and reverse traffic detection) and the $1,800 Comfort and Convenience Package (that adds heated/cooled front seats, heated rear seats, a gesture-controlled tailgate, and electric recline/release for the rear seats). $350 for the SiriusXM radio seems a little on the pricy side, too, though the $375 heated front windshield made seconds’ work of a frosty morning’s mist.

All in all, with $995 destination, you’re looking at a $58,518 car. Yes, that would buy you a very pleasant Porsche. Nonetheless, the F-PACE 35t has a distinctive charm of its own, not to mention practicality, and that’s more than enough to endear me beyond any lingering rough edges.