Honda is on a roll with the Civic, and following the award-winning sedan comes this, the 2016 Civic Coupe. Wearing a redesigned body, but keeping much of the practicality of its four-door cousin, the trimmed-down and tautened Coupe promises a dash more design but without the compromise some two-doors demand.

Style-wise, the Civic sedan donates its nose but the hood is shortened by just over an inch and the roofline dropped by a little under an inch. The biggest changes are at the rear, where not only has the distance between the back wheels and the bumper been cut by over five inches, but the whole trunk lid has been redesigned with more dominant lights and an integrated spoiler. 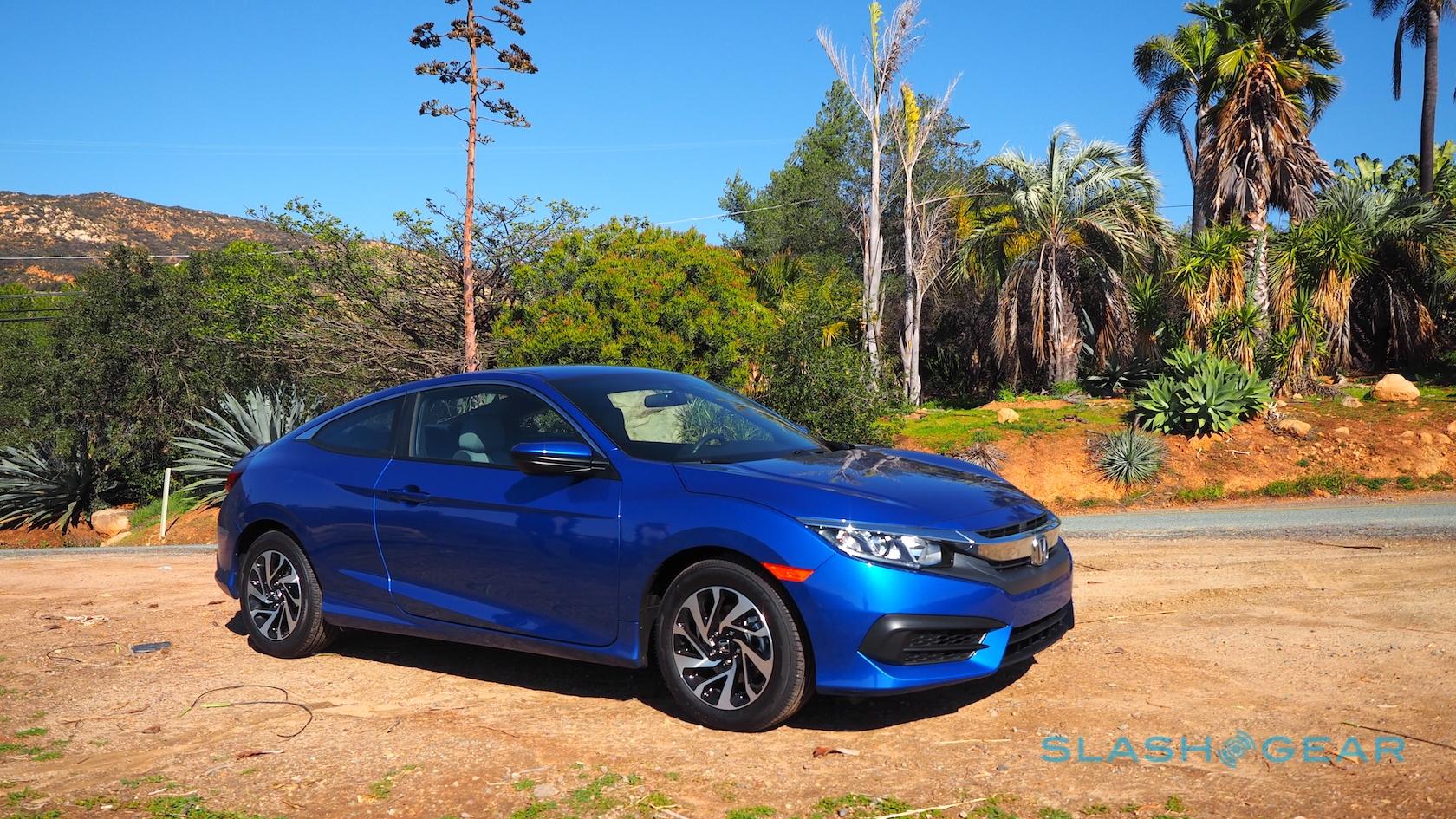 Meanwhile, the wheelbase has been stretched by more than an inch, helping push the wheels out to the corners visually. Honda is keen to emphasize the Civic Coupe’s sporty posture, though it’s not really an aggressive car.

The sculpting that starts around the doors and arches up over the back wheels does give it a pleasing solidity, but there’s a meatiness to the rear that feels like it should’ve been offset by a cutaway underneath the edge of the spoiler. 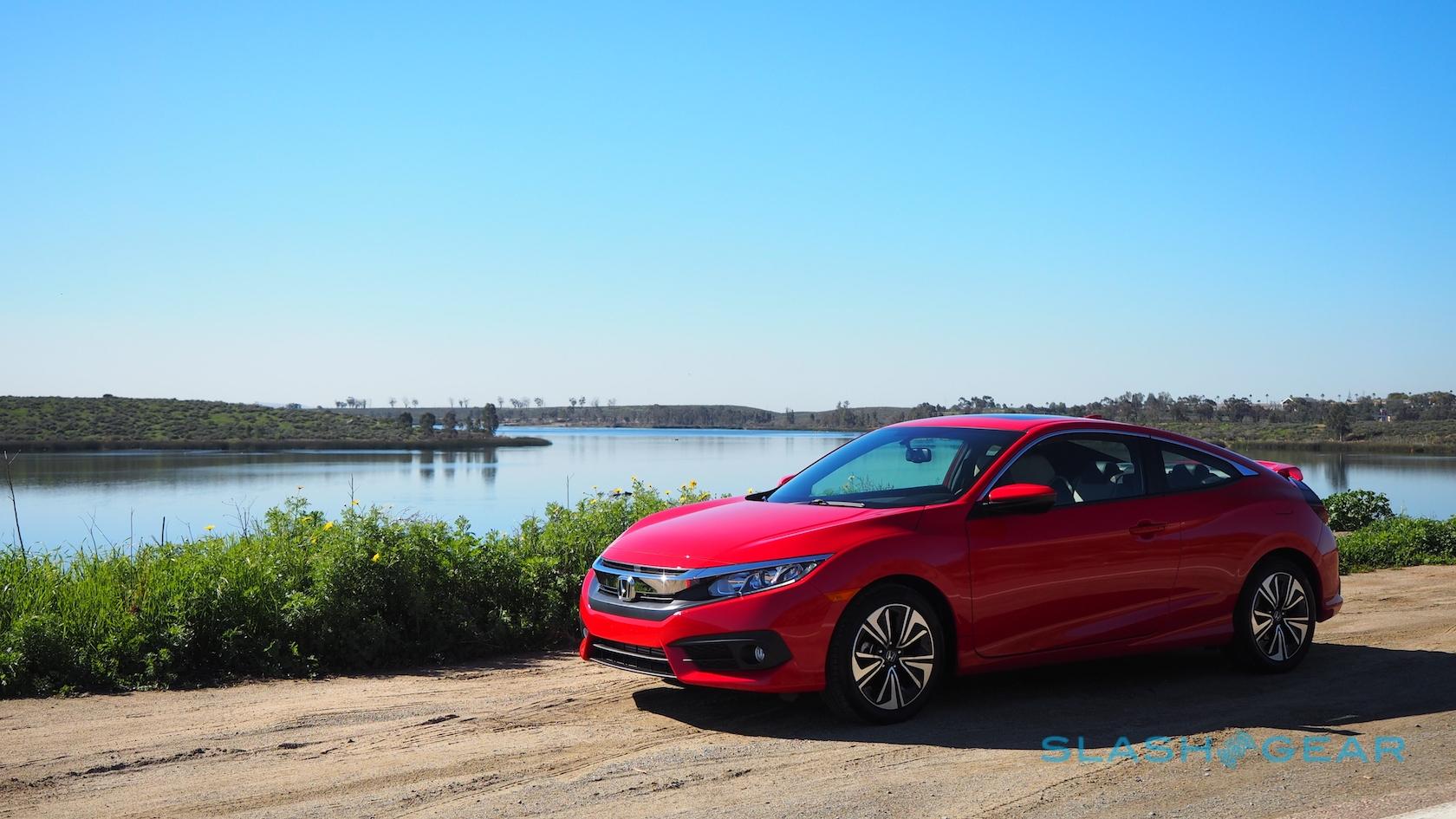 Still, that does mean rear seat room isn’t too miserly. You lose some headroom of course, and it’s really now only suited for two rather than three like the sedan, but at 5’8 I had legroom with a similarly-sized driver in front of me. 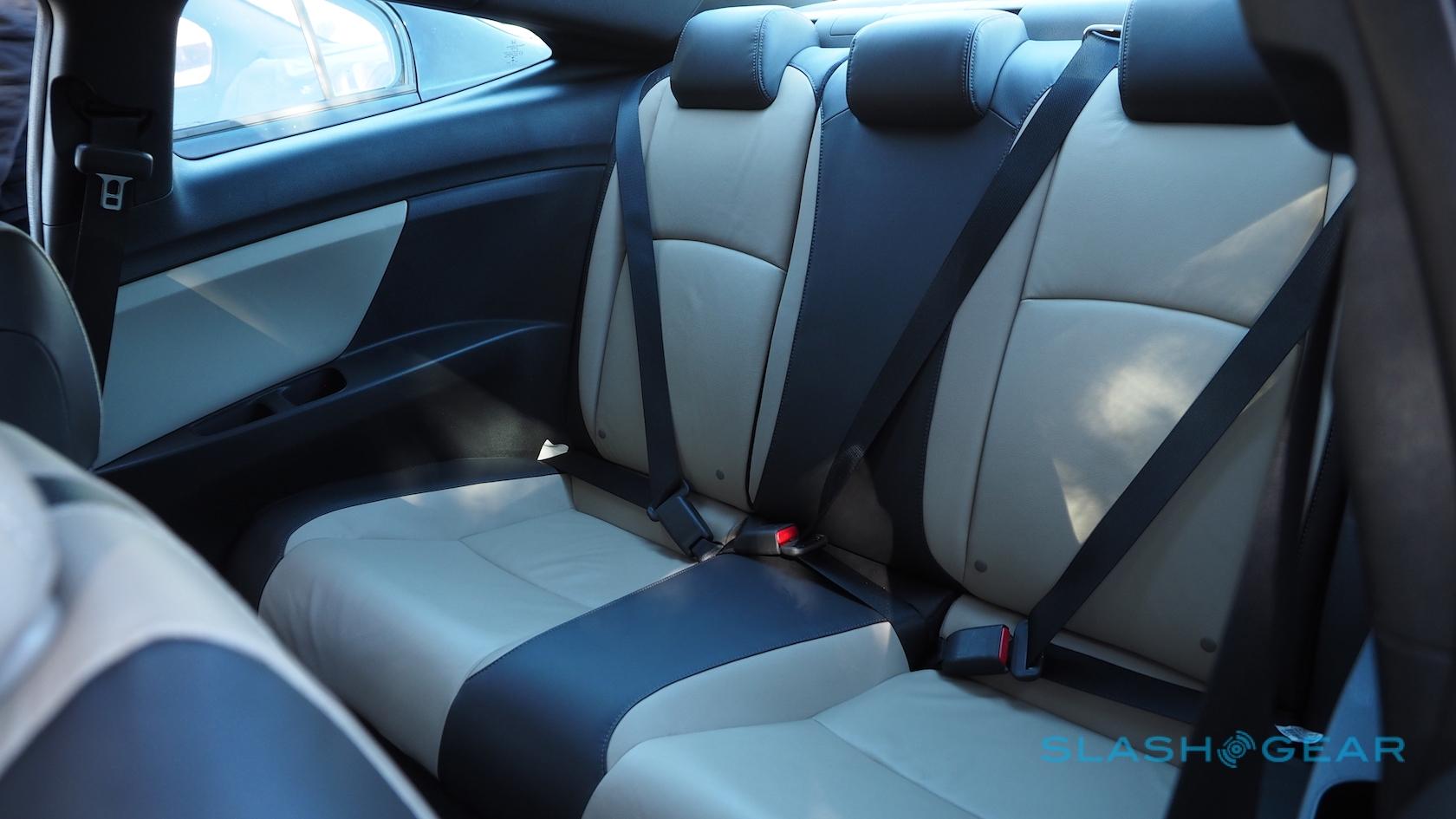 Inside, the dashboard has effectively been carried over from the sedan, no bad thing. The center console is topped, on EX-T models and above, by a 7-inch Display Audio touchscreen infotainment system, with CarPlay and Android Auto support; it’s a considerable improvement over Honda’s more rudimentary radio on lower-spec cars. 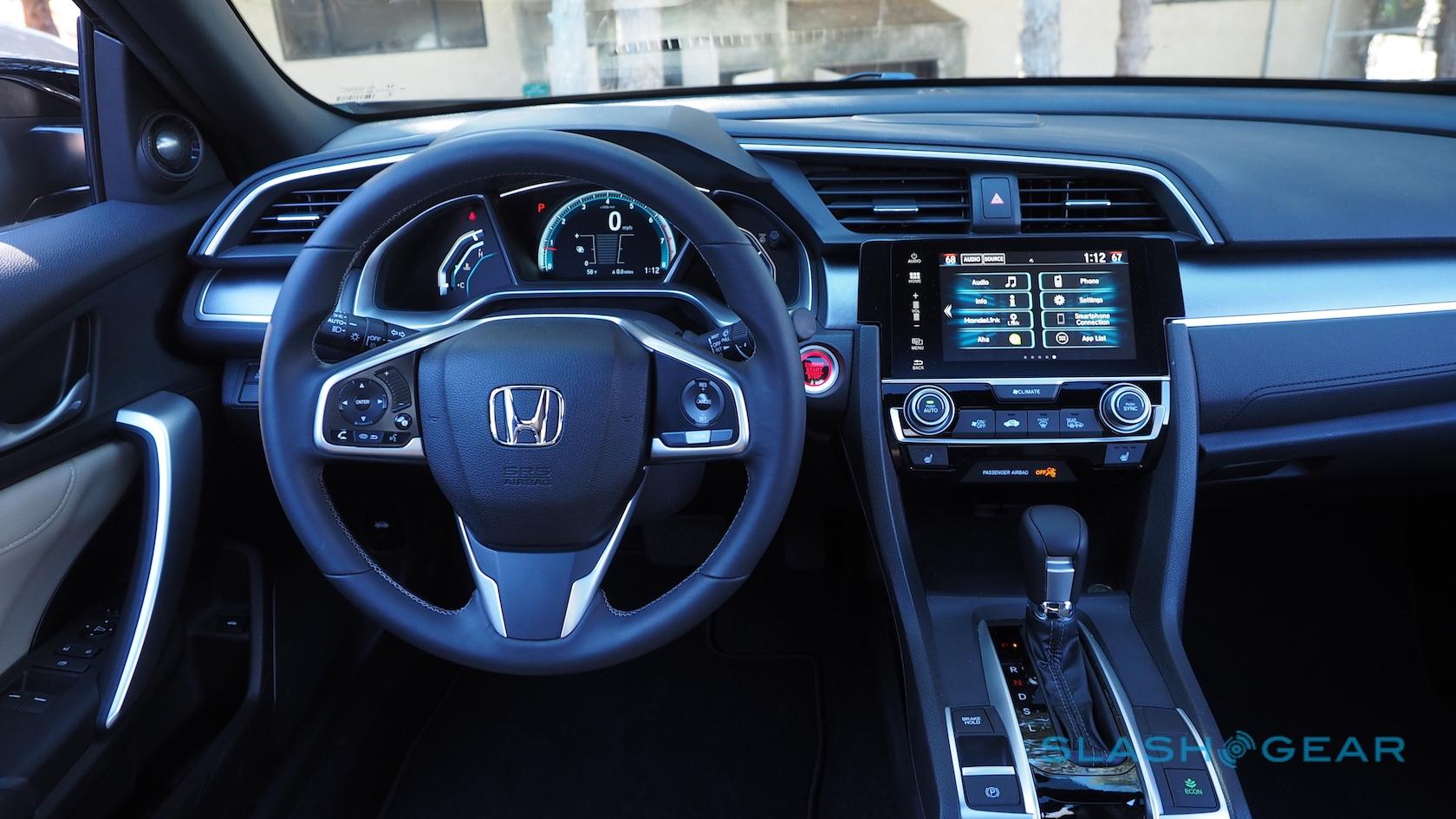 My lingering complaint – and I’m not the only one – that Honda really should put a physical volume knob in there rather than the fiddly touch-sensitive strip that requires you take your eyes off the road is also brought across from the sedan, but the large, easily-reached buttons for the HVAC system are welcome. It does seem odd that, while you can control dual-zone temperature and recirculation with dedicated buttons, to actually change the fan speed you need to jump into the dedicated Climate screen. 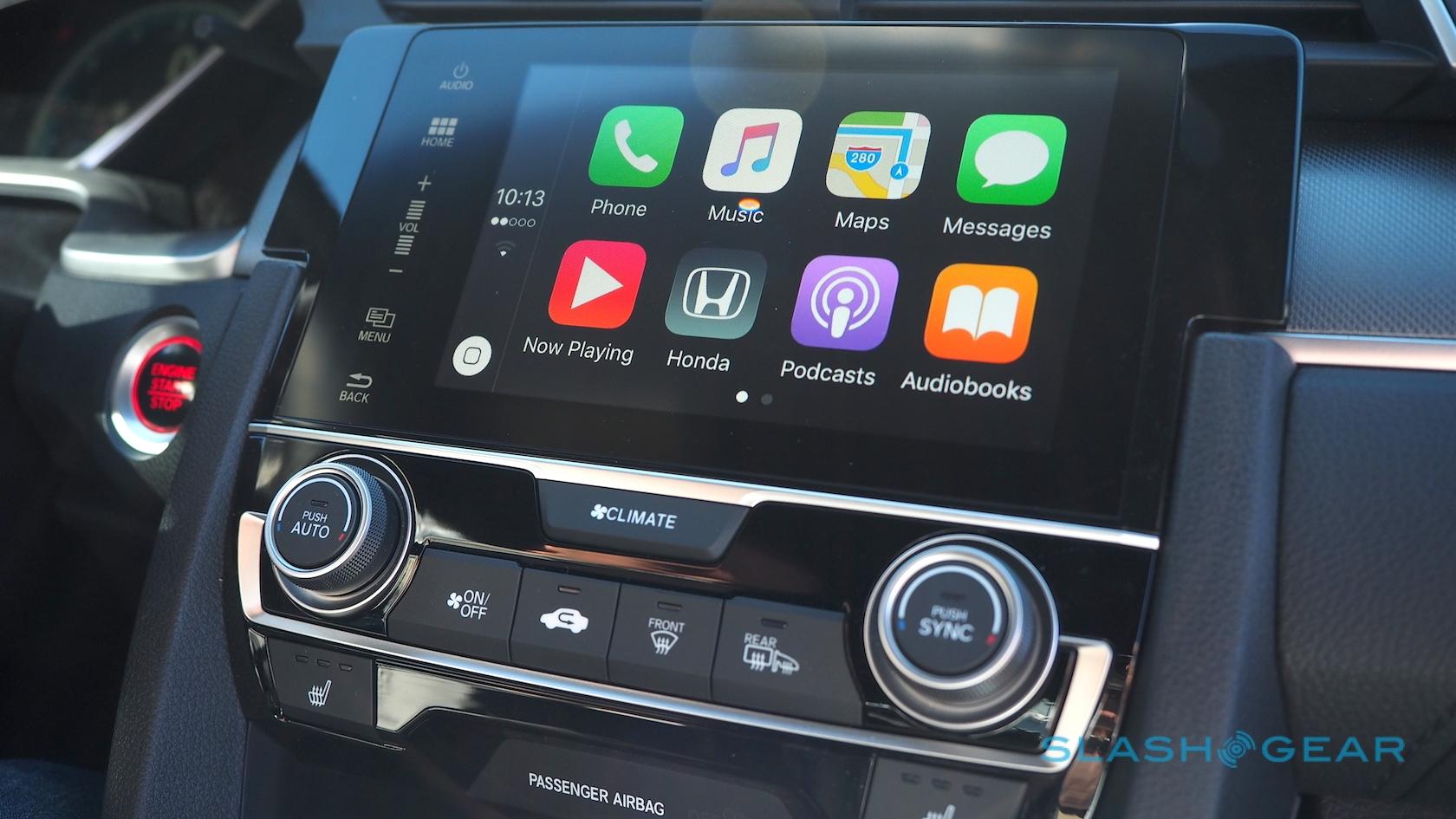 Step up to the EX-T, meanwhile – the first in the line-up to include the 1.5-liter turbo engine – and you get bigger, 17-inch alloys, fog lights, heated cloth seats, a 10-speaker audio system with a hefty (and great sounding) 450W of amplification, XM and HD radio, and dual-zone climate control. 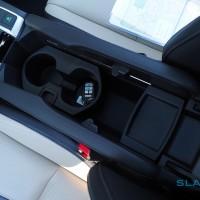 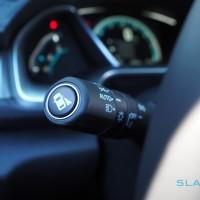 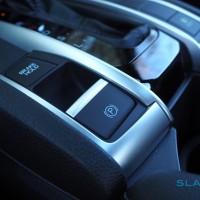 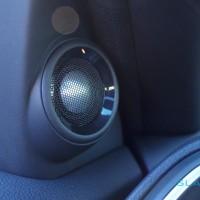 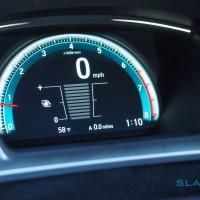 EX-L adds leather on the seats, wheel, and shifter, and the Touring throws in Honda Sensing, rain-sensing wipers, LED headlamps, navigation, and chromed door handles. I had a chance to play with some of Honda’s optional extras, too, like wireless phone charging in the center console.

As is the case with the sedan, Civic Coupe buyers get a choice of two engines. The entry-level car uses a 2.0-liter with a either a 6-speed manual or a CVT automatic, good for 158 HP and 138 lb-ft. of torque. It’s a solid engine but nothing special, feeling somewhat breathless when pushed beyond cruising. 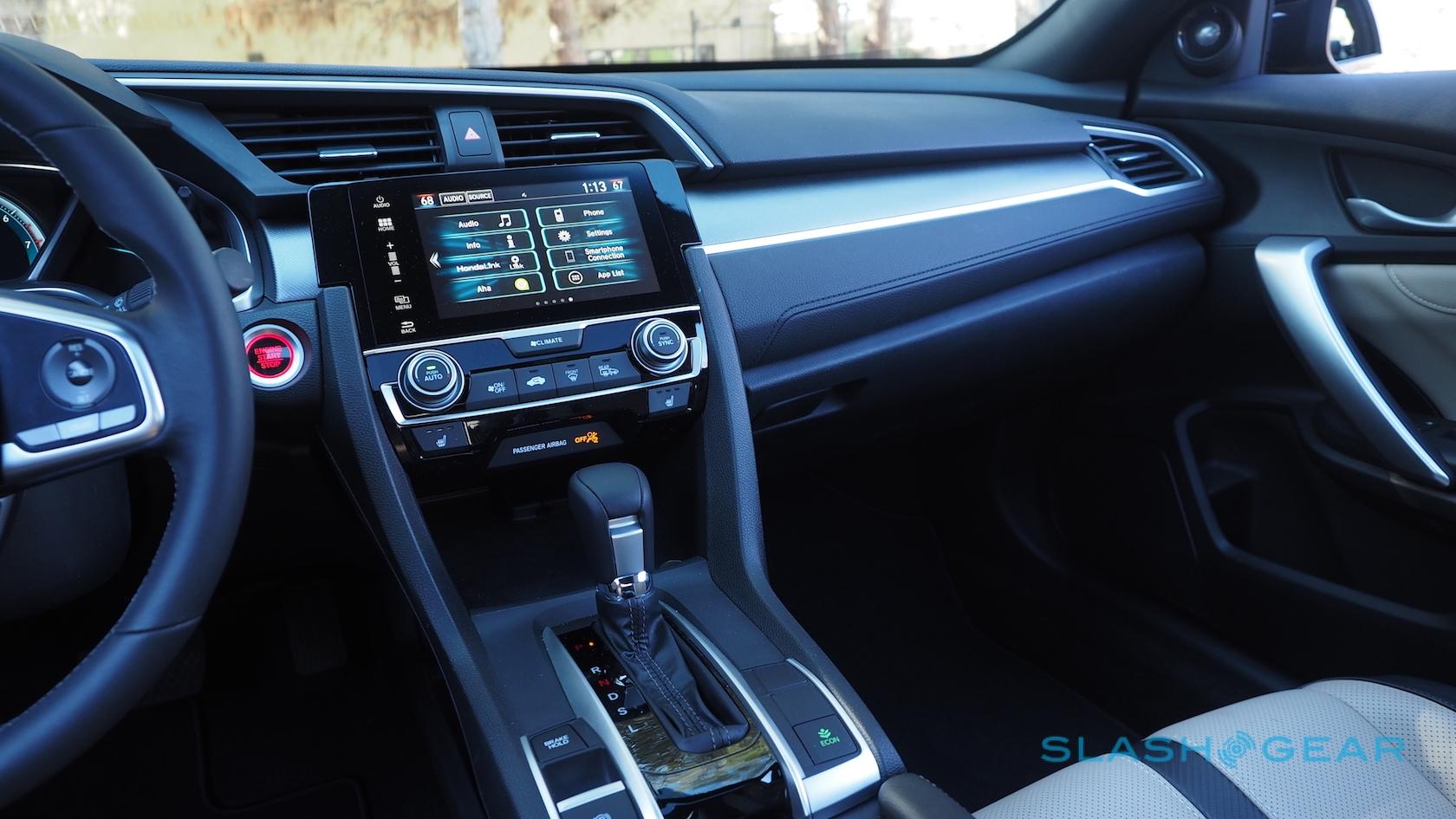 Better, then, to go for the 1.5-liter turbo, new with the 2016 Civic and mustering 174 HP and 162 lb-ft. of torque. It’s a far more enthusiastic engine, with peak torque arriving between 1,800 and 5,500 rpm, and the turbocharger spooling up swiftly to give the Civic Coupe the pep its name suggests.

It’s also more economical than the base engine – Honda says 31 mpg in the city, 41 on the highway, and 35 combined, versus 30, 41, and 34 mpg respectively for the 2.0 – though given it does encourage more eager driving you might need to show a little restraint if you want to get near those numbers. 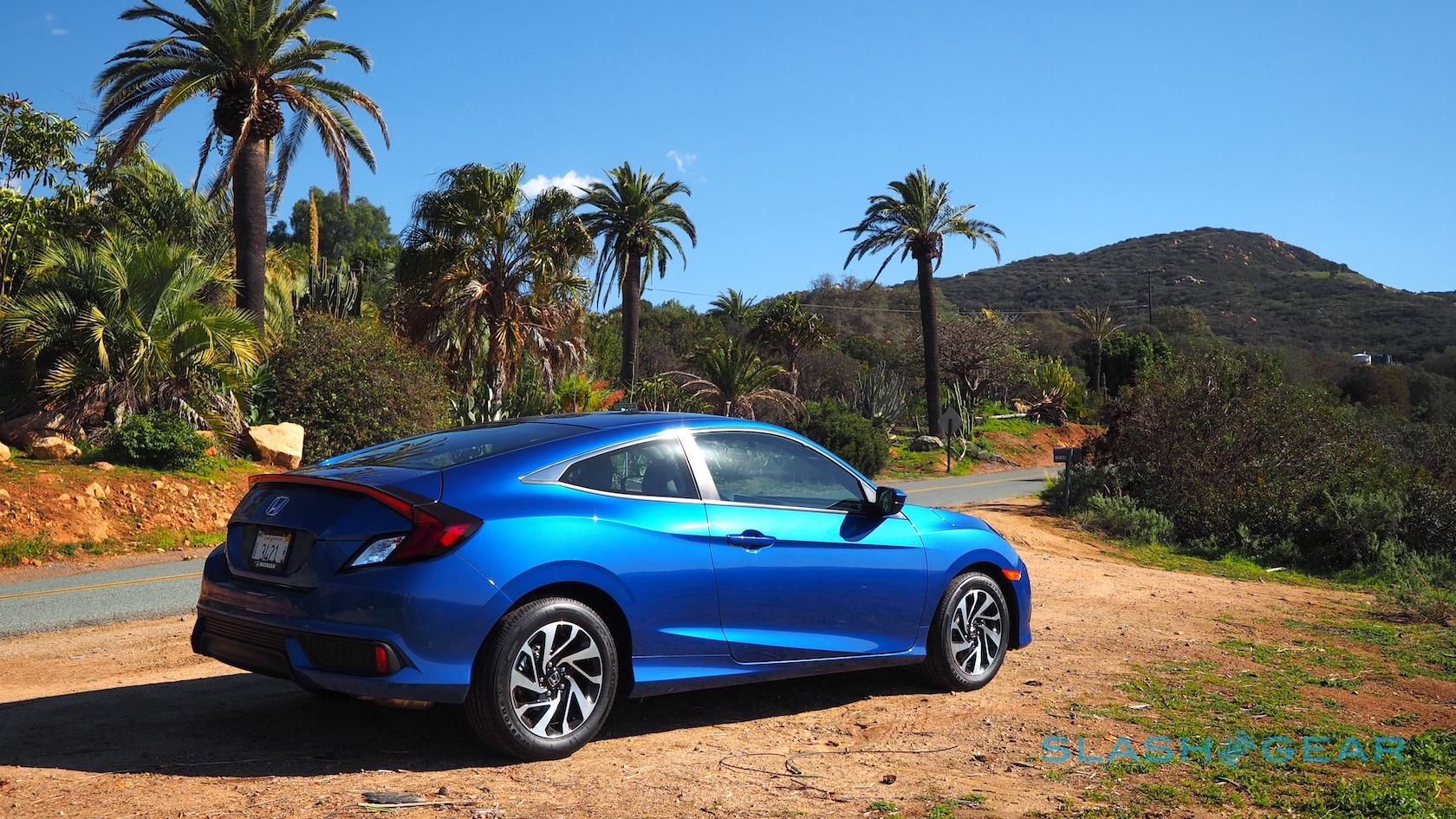 Compared to the sedan, the dampers and wheels have been stiffened across the board, while the turbo engined models crank up the damping force even further, increase the spring rates for greater agility, and – in the Touring – cut overall chassis weight. Hard drivers probably want to go for the EXT, since the Touring also gets tuned for “more premium feel” in Honda-speak, which amounts on the road to a little more detachment than the slightly cheaper model.

Perhaps the best news is for your right hand. With the Civic sedan, the only way to get a manual transmission was to opt for the entry-level car with its 2.0-liter engine; if you wanted the 1.5 turbo, it was the automatic or nothing. Now, Honda says, it’s had a change of heart. 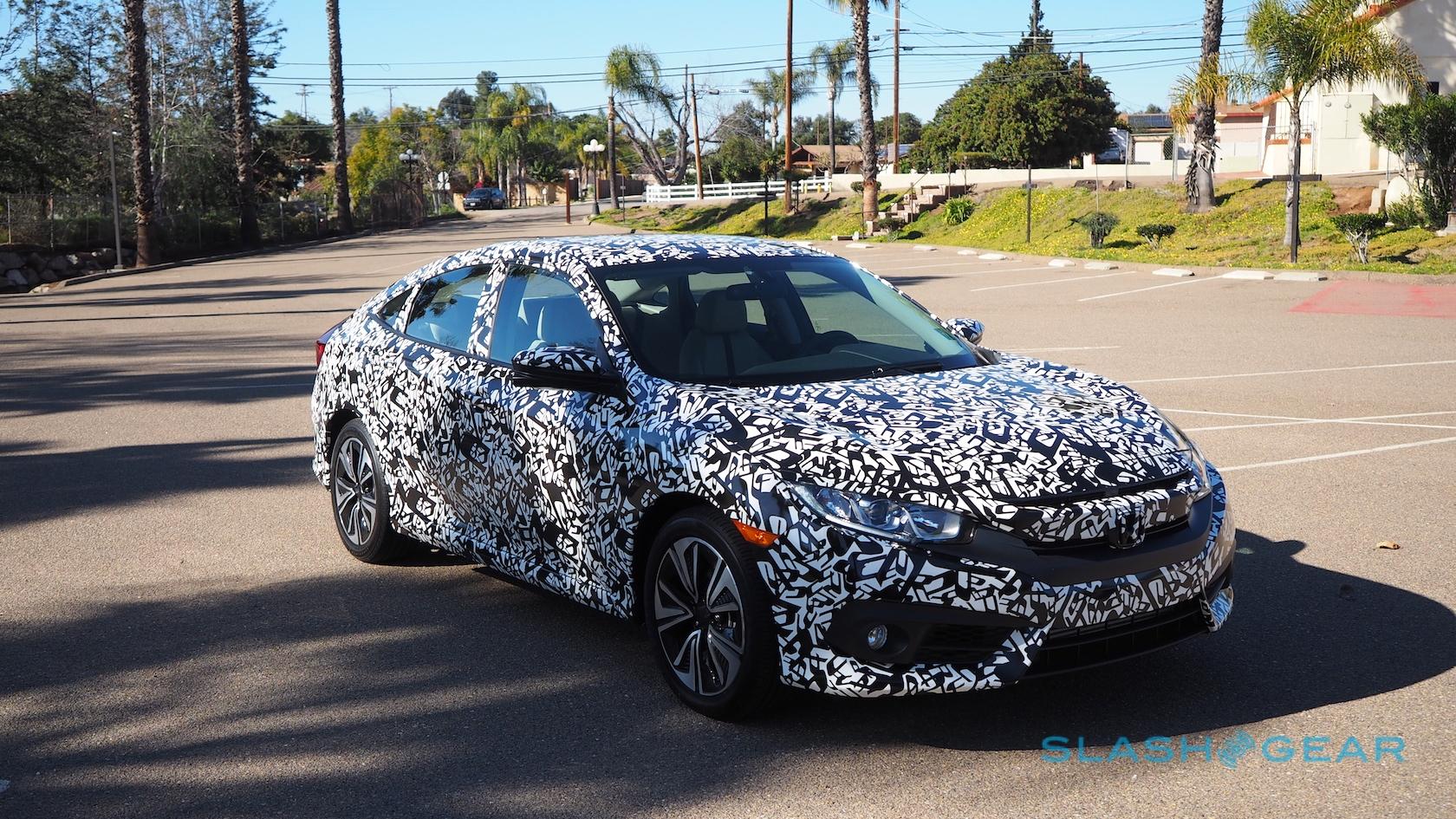 So, eventually you’ll be able to get the Civic Coupe with a six-speed manual gearbox and the 1.5-liter turbo, and they make an excellent combination. Honda couldn’t get a car in time for me to drive, but did have a prototype sedan with the same setup.

The gearbox is modified from that used with the 2.0-liter, to handle the increase in torque among other things, and it feels slicker and more precise. Where the 2.0-liter demands a fair amount of gearshift stirring in order to keep things moving, the 1.5’s turbocharger wades in to help with things like overtaking without downshifting. Frankly, while the 2.0/6SP combo feels like the budget option it is, the 1.5/6SP actually rewards the keener driver. 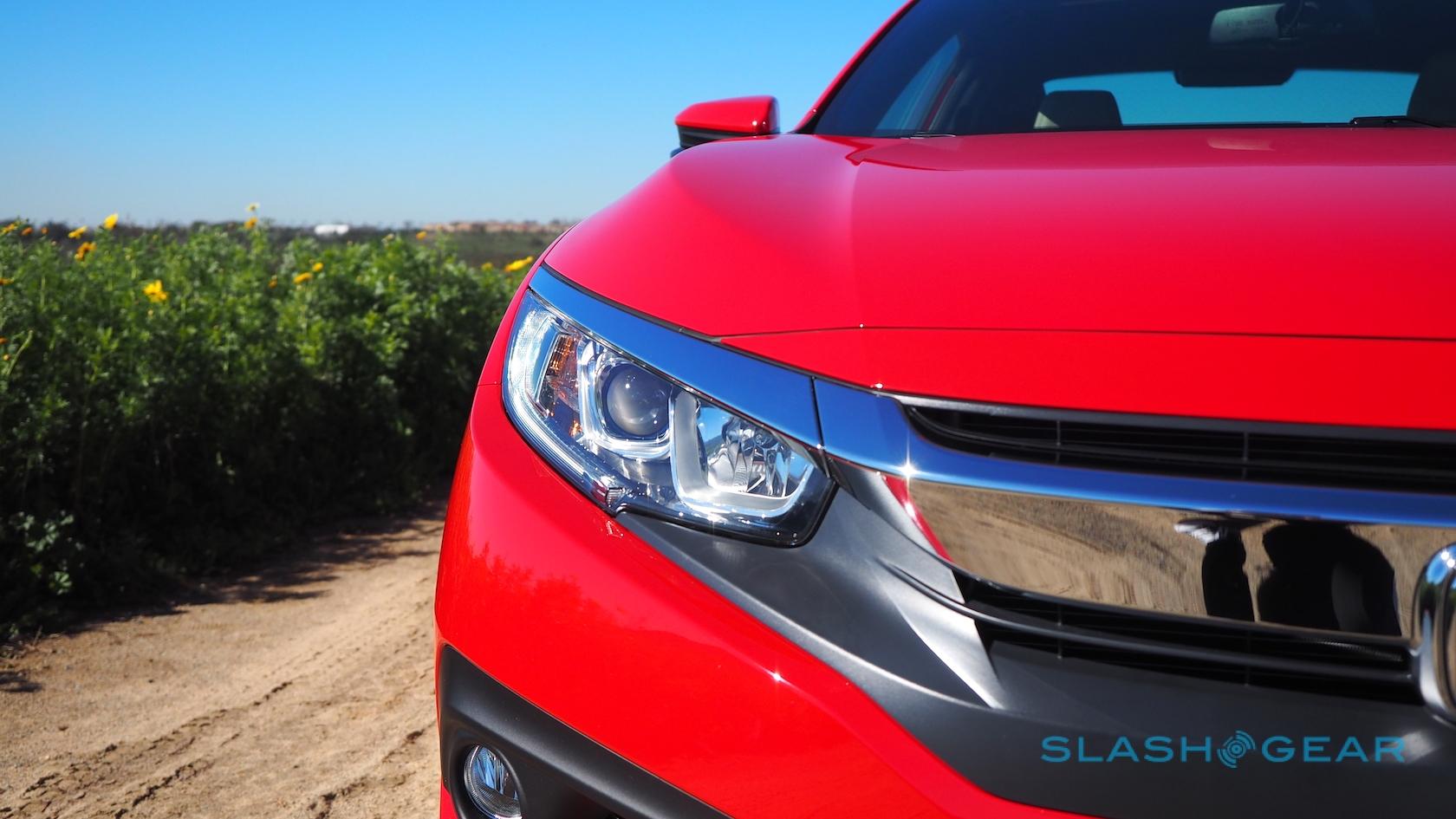 All the same, Honda isn’t expecting it to make much of a significant dint in overall Civic Coupe sales, and I’m not really surprised. For all the nods to sportiness, the new two-door is really about a shot of style with your safe, reliable Civic. 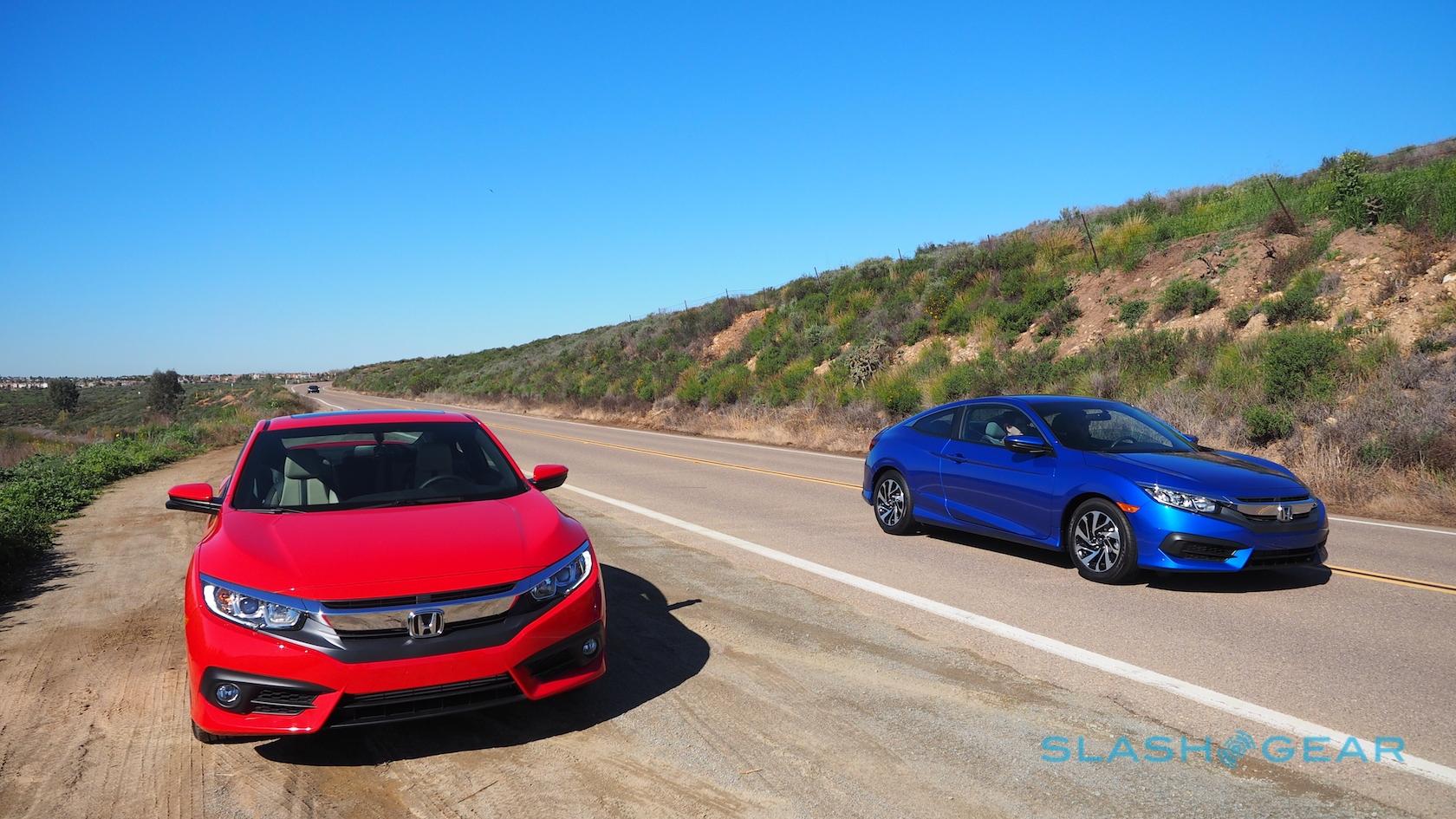 That’s no bad thing – Honda Sensing, with its adaptive cruise control featuring low-speed traffic following, its lane-keeping assistance and road-departure mitigation, forward collision warning, and emergency auto-braking for vehicles and pedestrians – is probably worth the cost of entry to Touring spec on its own, and there’s the Type-R in the pipeline for those who demand real performance.

For the rest of us, the 2016 Civic Coupe offers handsome looks with minimal compromises in practicality. It should be affordable, too; Honda isn’t announcing pricing until closer to sales beginning in March, but tells me that it expects only a minimal bump from the outgoing car, just as was the case with the sedan before it. It’s the 2016 North American Car of the Year with a smarter outfit, and that’s just what it needs to be.