Google Play Music is starting the process of transitioning subscribers to YouTube Music, with a new library transfer tool promising to make it easy to switch over ahead of the shutdown later in 2020. Google announced that Google Play Music would be retiring some time back, but it has been slowly adding features to YouTube Music – as well as making the transfer process more seamless – to actually make that happen.

The good news is that there’s no great urgency, at least not yet. Google Play Music isn’t expected to actually shut down until later this year, Google has said, and the new transfer tool launched today is just the first step on the road to that.

With it, you’ll be able to not only move your music library over to YouTube Music, but your playlists and your personal taste preferences too. “For now, users will continue to have access to both services,” Google says. “We want to ensure everyone has time to transfer their content and get used to YouTube Music, so we’ll provide plenty of notice ahead of users no longer having access to Google Play Music later this year.”

If you’re a Google Play Music user, you’ll get an email soon with instructions on how to start the transfer. You’ll need the YouTube Music app – which is available for iOS and Android – within which you’ll find a new “Transfer” button has appeared. Clicking that will move all uploads, purchases, added songs and albums, personal and subscribed playlists, likes and dislikes, curated stations, and personal taste preferences across.

Updated recommendations will appear immediately on the YouTube Music home screen. An email and notification later on will confirm when the full music library has been transferred, since that will take a little longer. At that point, it will be visible in the “Library” tab.

Podcasts, meanwhile, will be handled differently. For those, Google is directing people to the Google Podcasts app, which is also available for iOS and Android. There’s a new page which automates transferring over subscriptions and episode progress from Google Play Music to Google Podcasts. 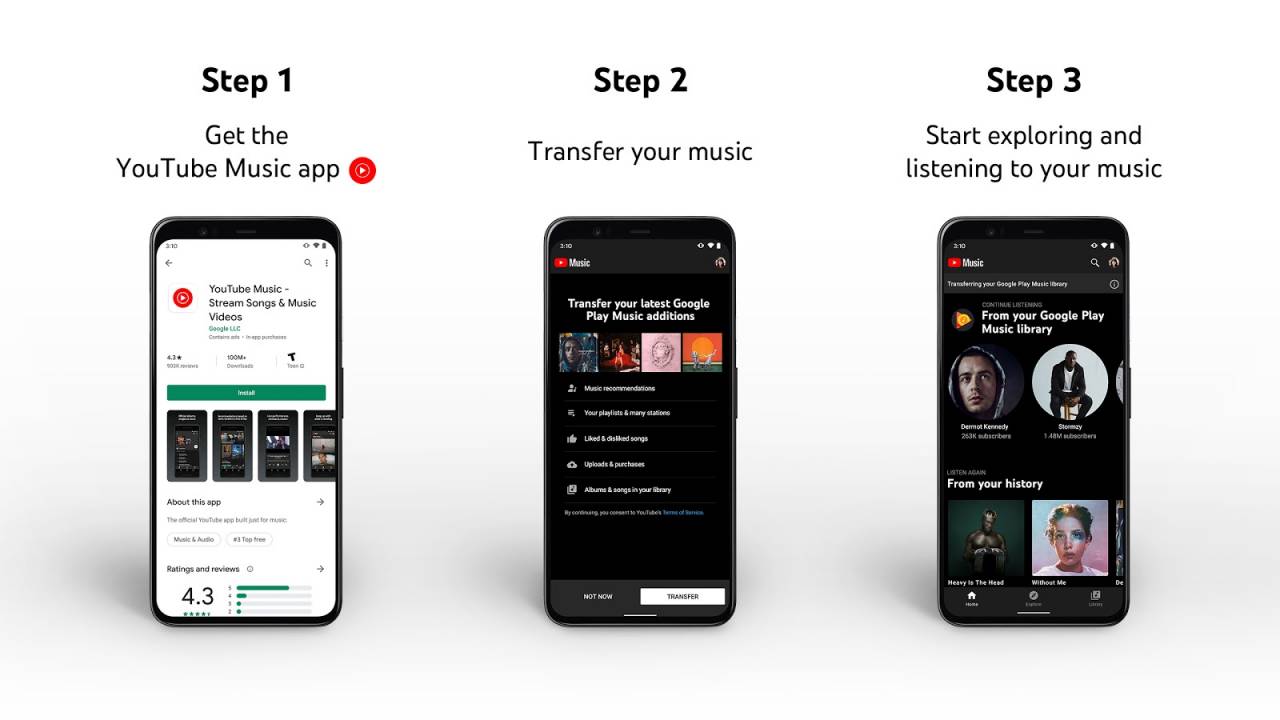 As you’d expect, there hasn’t been exact feature parity between Google Play Music and YouTube Music. Recently, Google upgraded playlists on the latter to support 5,000 songs instead of 1,000; it also supports up to 100,000 personal tracks in the YouTube Music library, twice the number that Google Play Music supports.

There’s also offline listening – albeit on Android only, for the moment – and lyrics for songs. A new Explore tab makes accessing things like new releases and genre playlists more straightforward, too.

For the most part, users can expect the same pricing from the two services. Ad-supported YouTube Music is free; YouTube Music Premium is $9.99 per month, without ads, supporting background listening, and enabling downloads. YouTube Premium, at $11.99, offers the same features for both YouTube videos and YouTube Music.

Google Play Music Unlimited subscribers will automatically get access to the equivalent tier of YouTube Music Premium or YouTube Premium. It’ll be priced the same, unless the user is in a location with fluctuating currently, in which case it could change.