Scientists at the European Space Agency have had a Sunday surprise, with the plucky Philae lander unexpectedly waking up after over half a year of hibernation. The probe landed on the surface of comet 67P/Churyumov-Gerasimenko in November 2014, but celebrations quickly soured when the ESA team realized its positioning would leave it short on sunlight for its solar panels. After around 60 hours of operation, Philae shut down and left the scientists uncertain whether it would be heard from again.

Now, many months later, Philae has spoken up. Communications were received at the ESA’s European Space Operations Centre in Darmstadt this weekend, routed via the Rosetta satellite around the comet.

Although it was just 85 seconds of chatter, that was enough to give the ESA team a good insight into what’s been going on – not to mention the current state of the probe.

“Philae is doing very well: It has an operating temperature of -35ºC and has 24 Watts available,” Philae Project Manager Dr. Stephan Ulamec at the Lander Control Center at the German Aerospace Center (DLR) said today. “The lander is ready for operations.” 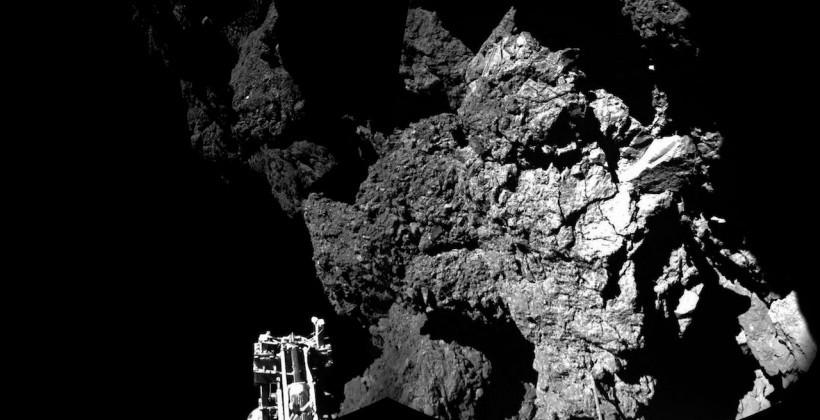 In fact, it appears Philae has been active for some time already, but unable to route its communications back to Earth. The ESA had been listening out for resumed transmissions since mid-March.

300 packets of data have been analyzed so far, but there are more than 8,000 still in the lander’s internal storage. The expectation is that the information will give valuable insight into what Philae has been up to, and help shape the experiments to come that will use its remaining charge.

The Rosetta mission was an ambitious one from the offset. Comet 67P/Churyumov-Gerasimenko is traveling at around 80,000 mph through space, and not only did the Rosetta spacecraft have to rendezvous with it, it needed to safely send the Philae probe down to the surface.

Gravity alone wouldn’t be enough to achieve that, so the ESA scientists came up with a complex harpoon system and a trio of drill-equipped feet to burrow into the rock, intended to hold the lander in place. However, all failed to go to plan, and Philae bounced and ended up secured in a less well-illuminated position than initially aimed for.

Reliant on the meagre scraps of sunlight it could absorb and the remaining charge in its batteries – which had never been intended to last for an extended period – Philae sent back some photos and a little teasing data, but then shut down.

The ESA said back in February that it wasn’t necessarily the end of the mission, but exactly what Philae will do – and how that will diverge from the initial goals of the project – now has to be figured out given the less-than-ideal circumstances on the comet.