iPhone 5 owners may find that their spanking new smartphone produces photos considerably under the resolution expected, though it’s part of a plan for improved low-light performance not a malfunction. The new iPhone is capable of 8-megapixel stills from its sapphire-protected main camera, but some will turn out with roughly half that resolution thanks to an oversampling system that condenses down pixel data.

The system is a way to address low-light performance, a situation which usually results in extra noise in the final image despite high-resolution sensors. Apple’s approach is to combine the data from four adjacent pixels on the sensor into a single pixel in the final image in what it calls “dynamic low-light mode.”

According to Apple, the iPhone 5’s “ISP detects when you are in extremely low light and switches the sensor context to combine 4 pixels into one, creating an additional 2 f-stop brightness and sensitivity.” Meanwhile, there’s also a spatial noise reduction system which compares pixels with their immediate neighbors and identifies when they might be out of place. For instance, Apple suggests, the spatial system could spot and correct the disparity of “an image of the sky with a single green pixel in a sea of blue pixels.” 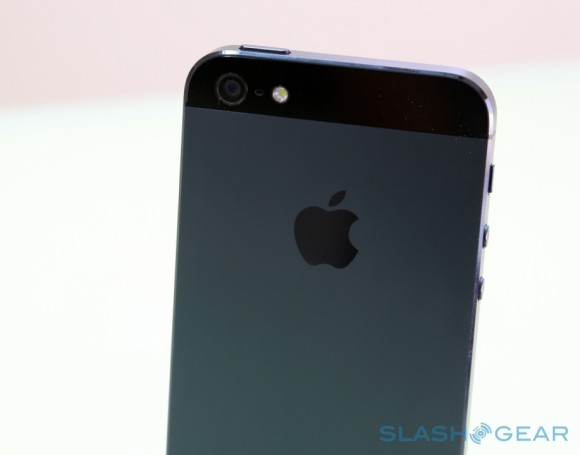 The ISP doesn’t take an all-or-nothing approach. A so-called smart filter can tell the difference between a flat field of color, without texture, and thus apply the noise averaging process, but not adjust a textured image in the same way.

We’ve seen pixel oversampling used to good effect in recent months by Nokia, with the 808 PureView taking a similar approach to Apple’s in the iPhone 5. Nokia’s PureView system, however, compares a greater number of pixels: data from up to seven can be combined into a single pixel in the resulting shot. However, that attention to detail comes at a price, with the 808 PureView having a physically huge 41-megapixel sensor so as to produce images between 2- and 8-megapixels.

The iPhone 5, in contrast, produces roughly 4-megapixel shots from its quad-pixel oversampling, though in a smartphone that’s still pocket-friendly. That’s likely to make it a more useful function for owners, who will find their night photos, as well as those taken in clubs, pubs, and other low-light situations considerably improved.

Check out more on the iPhone 5’s camera – including some low-light sample shots – in our full review.