Yelp will flag businesses accused of racism in review clampdown

Yelp will flag businesses that have seen reports of racist behavior, the company has said today, with a new alert being added to their listings. The notification will be linked to profiles which see a sudden increase in reviews that aren’t based on “first-hand consumer experience,” which has often been connected to reports of racist activity or discrimination.

The labeling will not be used to flag businesses that have been demonstrating racist behaviors. Instead, Yelp will be using it to explain why there might be an increase in negative reviews of a business, after having been called out for some sort of racist action.

“Yelp’s User Operations team already places alerts on business pages when we notice an unusual uptick in reviews that are based on what someone may have seen in the news or on social media, rather than on a first-hand experience with the business,” Noorie Malik, VP of User Operations, explained of the new badge today. “Now, when a business gains public attention for reports of racist conduct, such as using racist language or symbols, Yelp will place a new Business Accused of Racist Behavior Alert on their Yelp page to inform users, along with a link to a news article where they can learn more about the incident.” 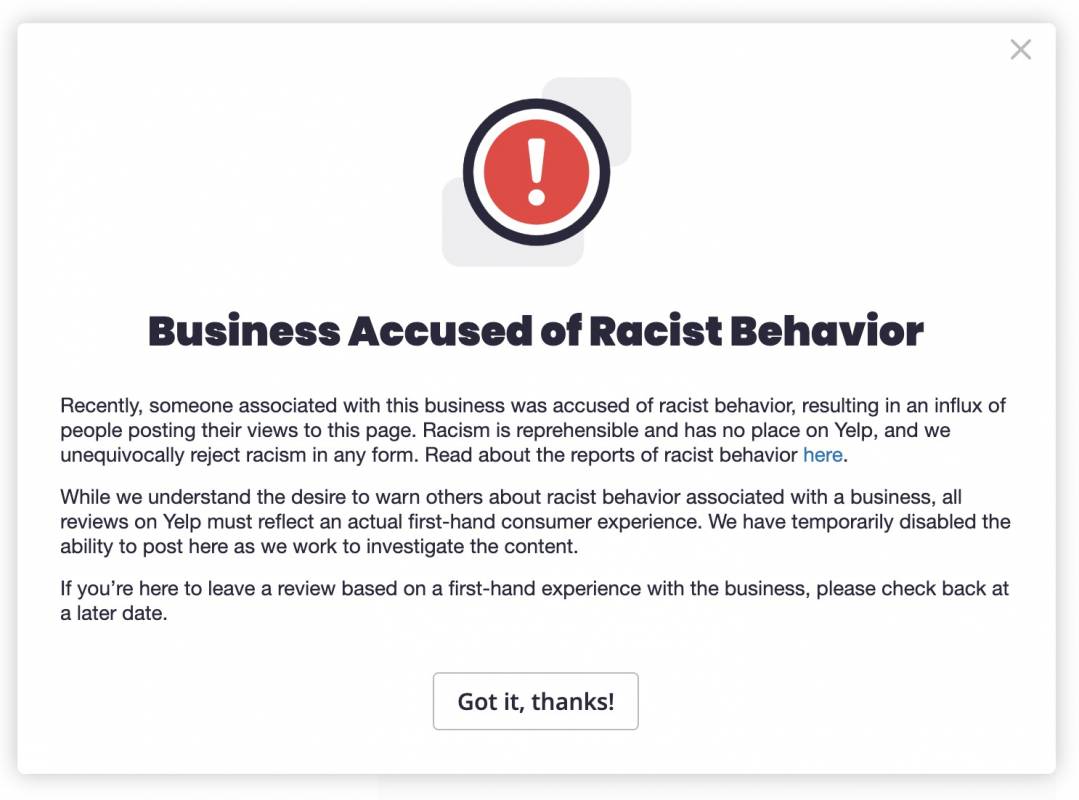 It’s a tricky balance to strike. On the one hand, Malik writes, “there is a clear need to warn consumers about businesses associated with egregious, racially-charged actions to help people make more informed spending decisions.” At the same time, however, the site reserves the right to temporarily shut down the reviewing process for individual businesses, if it suspects that users who were not direct customers are using that system to criticize a company.

Downrating a private business in response to owner or employee actions, overt political stances, or other issues has become increasingly commonplace. Given how reliant companies often are at this point on online reviews for gaining new customers, negative “astroturfing” can have a significant impact.

It follows an early “Public Attention Alert” which Yelp introduced to flag businesses which had been the subject of extra media scrutiny. Launched around the height of the Black Lives Matter protests, it has been used more than 450 times between May 26 and September 30 of this year, Yelp says. That will still be the first reaction, should someone associated with the business be accused of, or the target of, racist behavior.

“We’ll only escalate to a ‘Business Accused of Racist Behavior Alert’ when there’s resounding evidence of egregious, racist actions from a business owner or employee,” Yelp says, “such as using overtly racist slurs or symbols; and this alert will always link to a news article from a credible media outlet so users can learn more.”

“We advocate for personal expression and provide a platform that encourages people to share their experience online, but at the same time it’s always been Yelp’s policy that all reviews must be based on actual first-hand consumer experiences with the business,” Malik explains. “This policy is critical to mitigating fake reviews and maintaining the integrity of content on our platform. We don’t allow people to leave reviews based on media reports because it can artificially inflate or deflate a business’s star rating.”

It’s unclear just how rapidly a business might be able to clear their Yelp profile of the alert, and a link to any media coverage.