NTT DoCoMo has just launched the Xperia Z4, a.k.a. Xperia Z3+, the first in Japan to do so. Already, users are chiming in over the Internet to express their displeasure at their new smartphones being too hot to handle, literally. This practically confirms problems attributed to the Snapdragon 810 and could deal a devastating blow to both Qualcomm and Sony. Almost adding insult to injury, NTT DoCoMo itself carries a card warning users about heat problems, cementing issues facing Sony’s suppsoed flagship and Qualcomm’s beleaguered processor.

This could probably the most damning evidence against the Snapdragon 810, as it is also the most widespread. Heat problems on the HTC One M9 have been mostly downplayed because they didn’t seem to be that severe. The Xiaomi Mi Note Pro went a custom route to keep its own Snapdragon 810 cool. Supposedly, Sony used a more recent revision of the chip that theoretically solves that problem as well. But as the video yesterday showed, reality is farther from the truth.

While that video came with a disclaimer that it was a prototype model, we’re not hearing from consumers who just got the retail version. And the problem, sadly, persists. Naturally, some immediately tried to benchmark the Xperia Z4’s capabilities. The good news? The Snapdragon 810 is probably one of the fastest around. The bad news? You probably won’t appreciate that if your apps or the phone itself keeps shutting down because of overheating. 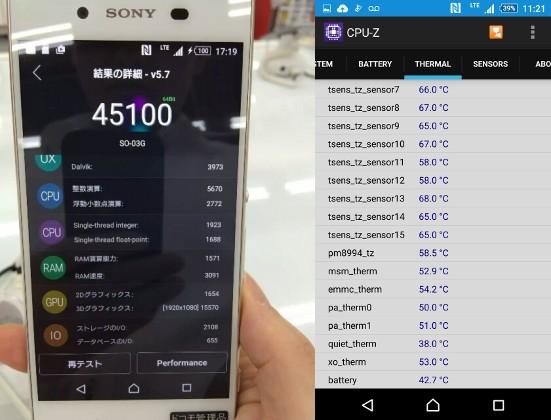 Even NTT DoCoMo itself warns users about potential heat problems that could cause the phone to suddenly close, which might also lead to data loss. The carrier advises users to take precautions, like regularly turning off the phone, switching it off when charging, or not to multitask too much, all of which sound rather absurd for a smartphone these days. To be fair, it isn’t only the Xperia Z4 that has this warning. The Sharp AQUOS ZETA and the Fujitsu ARROWS NX carry the same message, which isn’t surprising since both also carry the same processor. 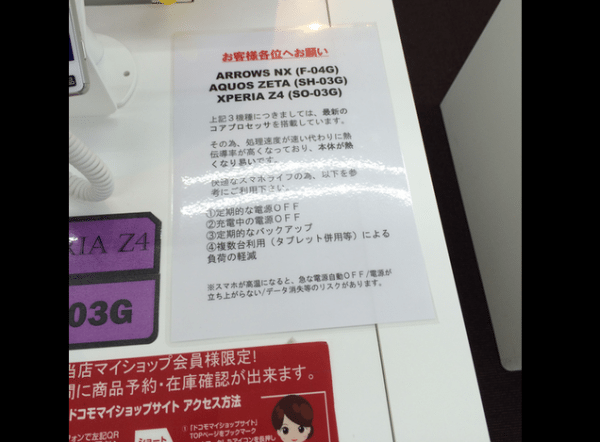 The Sony Xperia Z4 sells for 93,312 yen, equivalent to $744, and is, for the time being, Sony’s 2015 flagship. This practically flings mud on its face, after the whole debacle with the Z4 vs Z3+ oddity. Qualcomm isn’t going to remain unscathed either. No matter how it tries to downplay it, this is turning to be quite the PR mess for both companies.