XM-25 Airburst Smart Gun Fielded on US Troops in Afghanistan

I can imagine my friend Josiah wouldn’t have minded having one of these terrifyingly amazing death-launchers around when he was on his first tour of that gorgeous country. This is the XM25 Counter Defilade Target Engagement System, aka XM-25 Airburst weapon, otherwise known as a smart gun or smart grenade launcher, designed by Heckler and Koch, is what the US army expects to be a “game-changer” in Afghanistan. Program manager for the XM25 Lieutenant Colonel Chris Lehner had the following to say about this weapons epic abilities: “You get behind something when someone is shooting at you, and that sort of cover has protected people for thousands of years, … Now we’re taking that away from the enemy forever.”

The Pentagon plans on purchasing a total of at least 12,500 of these guns at around $25,000 to $30,000 a piece, enough for one per Infrantry squad and Special Forces team in Afghanistan. According to GearDiary, each round fired from the gun costs around $25. Is it worth it? Very possibly. What this weapon is capable of is firing a 25mm High Explosive round at a target, knowing how far it has to be away from the target before it should explode. This ability to explode before or after a target (such as a covered position) allows much more accuracy for the troop and much less collateral damage for the area surrounding the target. 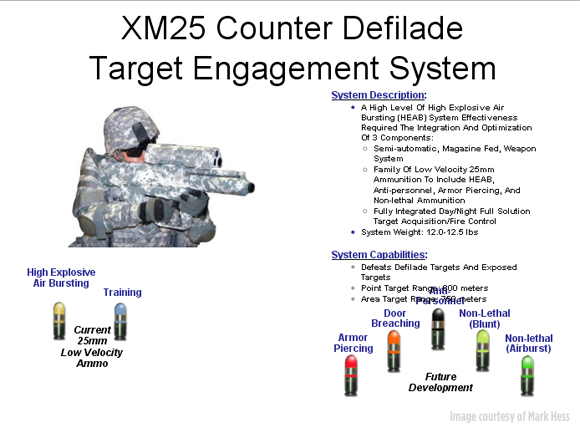 At the moment, troops are only able to basically blast through targets should their enemy high behind them. This weapon has a laser range finder that automatically finds “distance to target” and tells the warhead it launches when to blow. This weapon will be carried in addition to a soldier’s assault rifle, weighing in at around 14lbs in addition to ammunition. GearDiary reports additional features to be a 2X optical sight as well as a 4X thermal sight that’ll allow troops to view heat signatures. God help us if these become mainstream enough to find their way to both sides of these forever wars.

Death shall rain down upon us all.