As part of Xbox’s ongoing insane marketing rampage to the Xbox One‘s Nov. 22 launch, the company has parked a gigantic model of an Xbox One console on Seymour St. in downtown Vancouver, BC. As of yesterday and through the release date, street pedestrian traffic can walk up to it and enter their gamertags into a collective effort at “unlocking incredible experiences” across Canada. The spectacle is part of a nationwide Xbox visibility project called One Source.

Entering your gamertag into One Source at the Brobdignagian console also enters you to win unspecified prizes. Gamers can also enter their gamertags through the Xbox Live Dashboard or online at the One Source website. The earlier you enter, the more chances at prizes you have as time goes on. The various mystery events get unlocked as more people enter their gamertags. Currently the next event is at 62%. 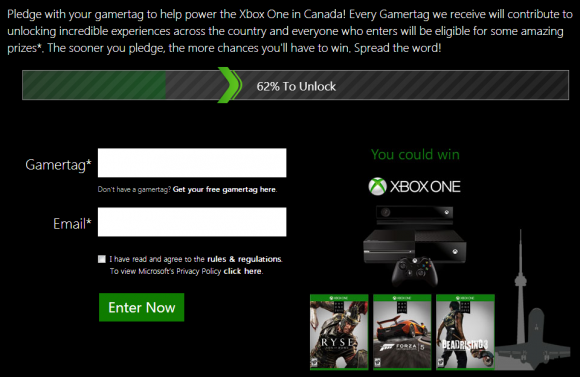 Xbox’s Area One and Test Drive tours of the world have also been going on since the beginning of October. The tours let people try out the new console at stationary locations and mobile Xbox One vehicles. The tours, which did make it into Canada, dovetail nicely into the One Source project.

The Xbox One campaign is not pulling punches as it competes with the new PlayStation 4. Last week for example the company dropped this spectacular promo video, and the marketing efforts show no signs of letting up. Upon its Nov. 22 launch, the next-gen console will sell for $499, which includes the console, one Xbox One controller, the Kinect sensor and a chat headset.