It’s a rite of passage all shiny new tech toys must face, and the Xbox One is no different: the ritualistic teardown. Microsoft’s new console has fallen prey to iFixit‘s screwdrivers, and while we’re used to modern gadgetry being purposefully designed to make DIY repairs close to impossible, in fact the Xbox One is surprisingly modular once you open up its angular casing.

In fact, the toughest part appears to be getting into the case itself, since it’s secured with clips rather than screws. Once you’re through, however, things start to get more accessible: the WiFi card, for instance, is a separate board rather than being soldered to the mainboard, as is the RF module board.

Microsoft got hit hard with Xbox 360 overheating issues, with the infamous red-ring-of-death showing up on baked consoles, and so there’s more fan-power inside the Xbox One. The 112mm main fan simply clips to the heatsink bracket, too, making it straightforward to replace. 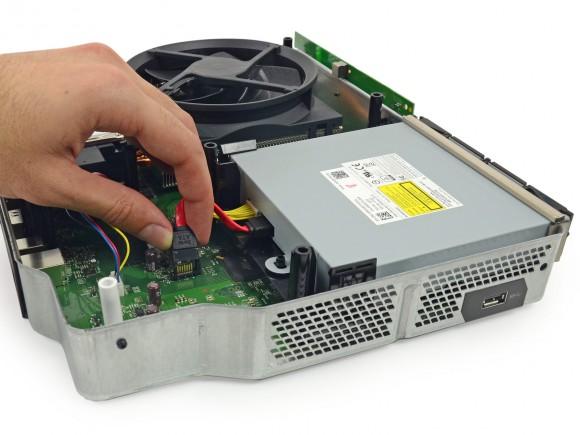 As for storage, officially the Xbox One’s 500GBV hard-drive is non-user-replaceable; unofficially, it’s a regular 2.5-inch SATA II drive that could be swapped out in a pinch. It’s a similar story for the Blu-ray drive, which is hooked up by a normal SATA connection.

It should probably come as little surprise that the Xbox One is pieced together effectively like a small PC, but the degree to which the parts are modular is still impressive. The recent teardown of the PS4, meanwhile, found a similarly open approach in Sony’s console, though it used a number of security screws to further dissuade owners from opening it up.