Xbox One Gamescom demoes were played on Windows gaming PCs

This week a couple of photos have been shared of a Gamescom-based Indie game booth showing a “crashed” Xbox One with Windows 7 at the helm. What’s far more likely is a PC being used under the desk in this situation, the Xbox One wireless controller shown clearly wired to the box. But don’t fret – this isn’t unheard of.

Photos here from Centrum Her show an Xbox One on top of the counter. At first glance, all seems well and good.

The game Ori and the Blind Forest was being shown here as a game that’ll be coming to Xbox One soon. It’s not yet ready for demo, and it’s probably not ready to be played directly on an Xbox One unit on its own yet, either. 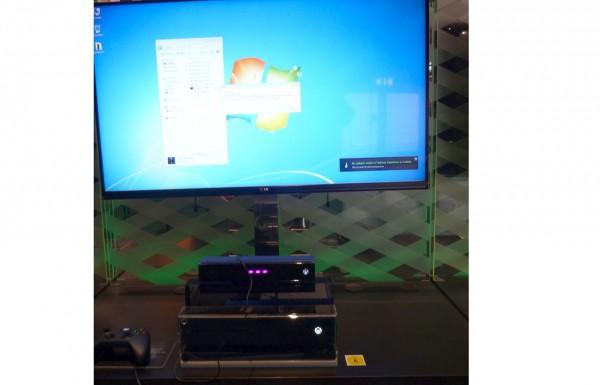 What’s strange is that though this game would be developed on Windows – and on a full-sized PC, of course – it would appear here that it’s running on a PC with NVIDIA graphics. The little black box in the lower right-hand corner of the display here is an update notification for NVIDIA GeForce Experience – this only appears if you have NVIDIA GeForce Experience downloaded, which wouldn’t make ANY sense unless you had an NVIDIA GPU inside your PC.

The Xbox One works with AMD graphics, not NVIDIA.

What this looks like – or what most users will see it as – is Microsoft trying to hide the fact that they’re demoing games on PC, not Xbox One. Bad news.

This HAS happened before – and it’s not an industry-destroying event, and will probably blow over within a day or two.