Xbox One E3 demos were played on Windows gaming PCs

Microsoft demoed Xbox One gameplay during E3 2013 this past week, and we even got to see some live gameplay for ourselves with Crytek’s Ryse. However, it seems Microsoft didn’t actually use the Xbox One to play these new games. Instead, it was discovered that Windows 7 gaming rigs equipped with NVIDIA GeForce 700-series GTX graphics were the ones running the show.

One attendee who was able to also play around with the Xbox One witnessed that the game crashed on him and went back to the Windows 7 desktop. Another gamer also spotted the “Windows sound that occurred during the Dead Rising 3 reveal” video near the 3:14 mark. Of course, we didn’t have any proof that Microsoft was in fact running these games on Windows PCs, but wait! 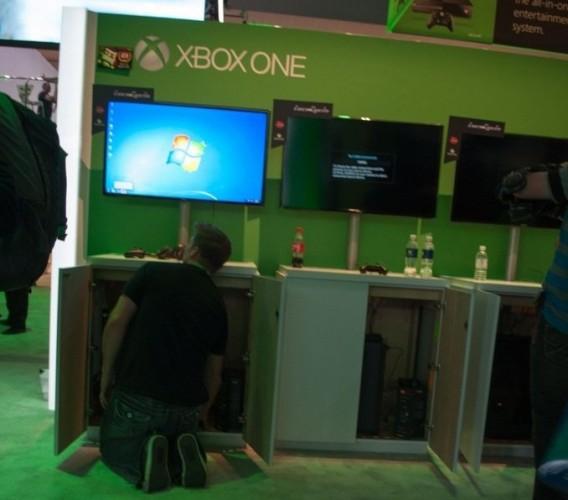 Yes, that’s the Windows 7 desktop on the screen, and there’s a gaming PC stuffed in the cabinet underneath. So were we being lied to? Well, not entirely, but the truth was incredibly bent. Electronic Arts COO Peter Moore said that the games being demoed on stage were running on comparable dev kit specifications, meaning that they weren’t running on final Xbox One hardware, but rather other machines that are comparable to the new console.

Then again, running the games on a NVIDIA GeForce GTX 700 series card isn’t exactly comparable to the Xbox One, since the console uses AMD innards, but we digress. It’s rather interesting to see that Microsoft is using Windows 7 to run these games, rather than their newest Windows 8 OS, begging the question of whether Microsoft trusts their latest OS to perform in the heat of the moment.

In the end, this shouldn’t really be a huge surprise. The Xbox One hardware isn’t finalized, and we’re guessing if you actually played all of these new games on the Xbox One, it probably wouldn’t be as good as Microsoft wants at this point, and in order to show off the best gameplay possible, what’s a company to do but play the games on a gaming PC?