Microsoft may force gamers of its next-gen Xbox “720” to install all games to the internal drive rather than run them from disc, with the new console – codenamed “Durango” – also insisting on a permanent online connection. New documentation purportedly from the Durango XDK (Xbox Development Kit) and shared by Vgleaks suggests Microsoft is changing the way the next Xbox will load and handle optical media; although the console will have a Blu-ray drive, the help files confirm, it will only be used for installation.

“Every Durango console will have a hard drive, although its exact capacity has not been chosen” the XDK reads. “It will be large enough, however, to hold a large number of games. All games will be installed on the hard drive. Play from the optical disc will not be supported.”

It’s suggested that the installation system is part of Microsoft’s attempt to avoid used games being sold, with per-console activation codes for each title that cannot be revoked or exchanged with others. Earlier chatter indicated that Microsoft would use an online authentication system for this, and the XDK also mentions the connectivity requirement Microsoft will have of the new console. 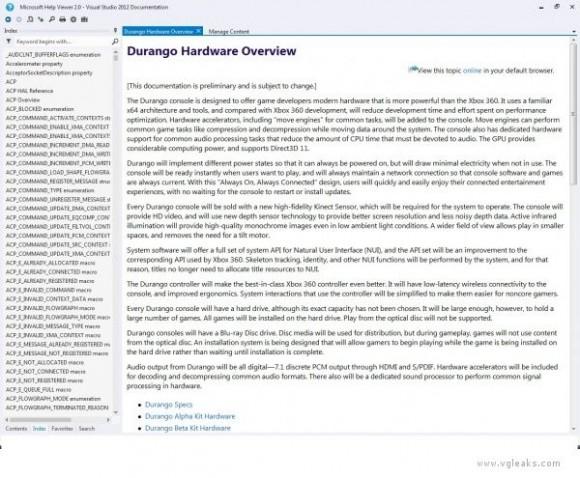 “Durango will implement different power states so that it can always be powered on, but will draw minimal electricity when not in use” the document states. “The console will be ready instantly when users want to play, and will always maintain a network connection so that console software and games are always current.”

Although the purpose of such an “Always On, Always Connected” system state is described as being beneficial for the gamer themselves – meaning they can avoid lengthy boot times as well as any downtime for system updates – it also could pay dividends for Microsoft’s monitoring of what titles owners are running. Without a connection, the console will presumably not play any games whatsoever, meaning it won’t be possible to install someone else’s copy but avoid the online activation process.

One small saving grace is the promise that players won’t have to wait for protracted installation processes to be completed before they can start the game. Microsoft is apparently working on a system whereby a title can be played midway through the first-time installation, reducing the amount of frustrating delay.

“Durango consoles will have a Blu-ray Disc drive. Disc media will be used for distribution, but during gameplay games will not use content from the optical disc. An installation system is being designed that will allow gamers to begin playing while the game is being installed on the hard drive rather than waiting until installation is complete” Microsoft

Still, limits on used games seldom meet with approval from either gamers or retailers, many of whom argue that since they’ve paid for the title, they should be able to do what they like with it. One possibility, however, is that while authentic the XDK information could be based on old policies. The Verge claims to have separately substantiated the files, but points out that they date from 2012 and as such Microsoft might have tweaked its approach to copyright and activation in the meantime.

The Xbox 720 is shaping up to be a significantly more “aware” console than its predecessor. Another mandatory component is a new Kinect sensor, smaller and more efficient than the existing sensor-bar, with a broader field of view, HD video support, and better low-light performance. It’s also believed to be able to track more people simultaneously: up to six at a time, rather than the current Kinect’s two.