Microsoft has detailed its challenge to cable TV, with a roadmap of Xbox LIVE streaming content for the Xbox 360 including Hulu Plus, Netflix and the BBC, as well as the Kinect-powered voice control that will be used to bypass the traditional remote. Beginning as part of the Xbox LIVE Dashboard update for the 360 that rolls out tomorrow, the dozens of TV channels, streaming services and other content providers will join gaming and other internet services on the console. More details of content deals after the cut.

“The power of Kinect combined with the intelligence of Bing search is turning your voice into the ultimate remote control. With Bing on Xbox, you can use your voice to effortlessly find the games, movies, TV shows and music you want and discover the best offerings on Xbox LIVE, by simply saying what you’re searching for. You say it, Xbox finds it” Microsoft

Just as Apple is rumored to be planning for Siri on its own TV hardware, Microsoft’s Kinect sensor will be used as a more natural way to control the XBOX Live interface. Voice control will recognize English in the US, Canada and the UK for Zune video, the Xbox LIVE Marketplace and certain of Microsoft’s content partners. Those who don’t have the Kinect sensor bar itself – or who fall outside of those countries – will get a text search bar instead. 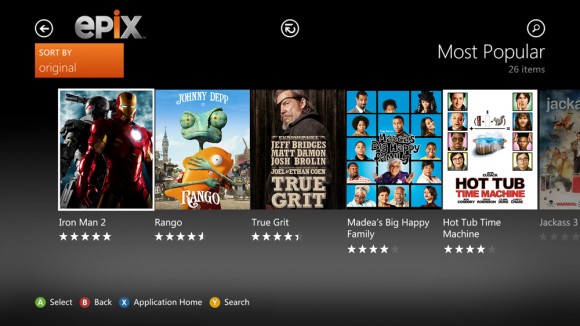 Microsoft’s content provider list makes for impressive reading, especially given so many IPTV services are US-centric. Set to roll out in phases, from December 6 through to the end of this month, and then sometime in 2012, the immediate line-up includes ESPN in the US, LOVEFILM in the UK, Netflix in Canada and Sky Go in Germany.

The roadmap for the XBOX Live partners is as follows: