X-Men comics in the movie Logan: images and details from the creator

The film Logan (2017) features several vintage-looking X-Men comic books that play a key role in the playing out of the film’s plot. This week we got the opportunity to pose a number of questions to the creator of those comic illustrations and designs, Dan Panosian. This illustrator is wildly talented in creating a wide variety of looks in his drawings and comic book designs and is also – importantly – able to illustrate, ink, and letter pages and covers for comics. WARNING: The following may have SPOILERS for the film Logan (2017).

The image you see above shows the Uncanny X-Men cover before final printing for the film on the left, then a clip from one of the trailers on the right. The Uncanny X-Men title lettering was moved just a bit, and the corner box illustration was changed from a team of X-Men to just Storm. Also in this image you’ll find Panosian’s own Comics Board stamp of approval – you’ll see below how the standard Comics Code Authority stamp had to be replaced.

How many pages were made for the project? How many comic covers?

†NOTE: All of the pages in this article that appear in black and white – those are the Quesada pages (and one cover).

Above you’ll see one close-up of the “Eden” pages referenced in the movie. There, and in one of the trailers that came out before the movie, we see pretty much the same pages being produced. Up close and personal you’ll find the publishing information showing that this is not the original run of Uncanny X-Men Comics – this is a fictional “Volume 2” – which does not exist in the real world. 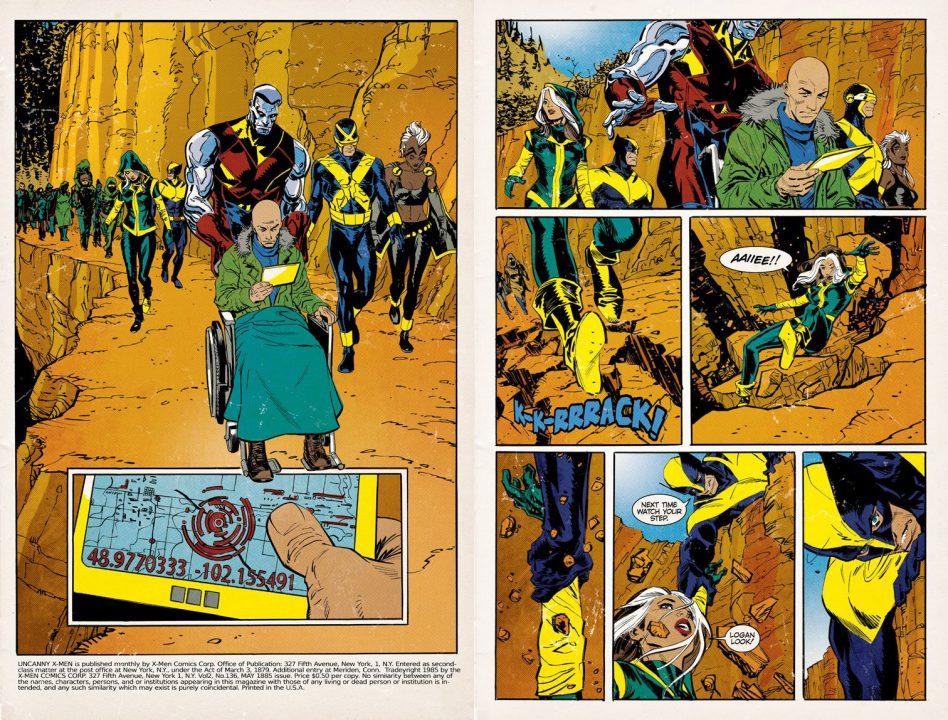 Next is another two-page spread from the “Eden” comic. This page ends up being stapled in the middle and placed horizontally – like you see here – in the comic in the movie. Washed out, just like colors in an 80’s comic should be. 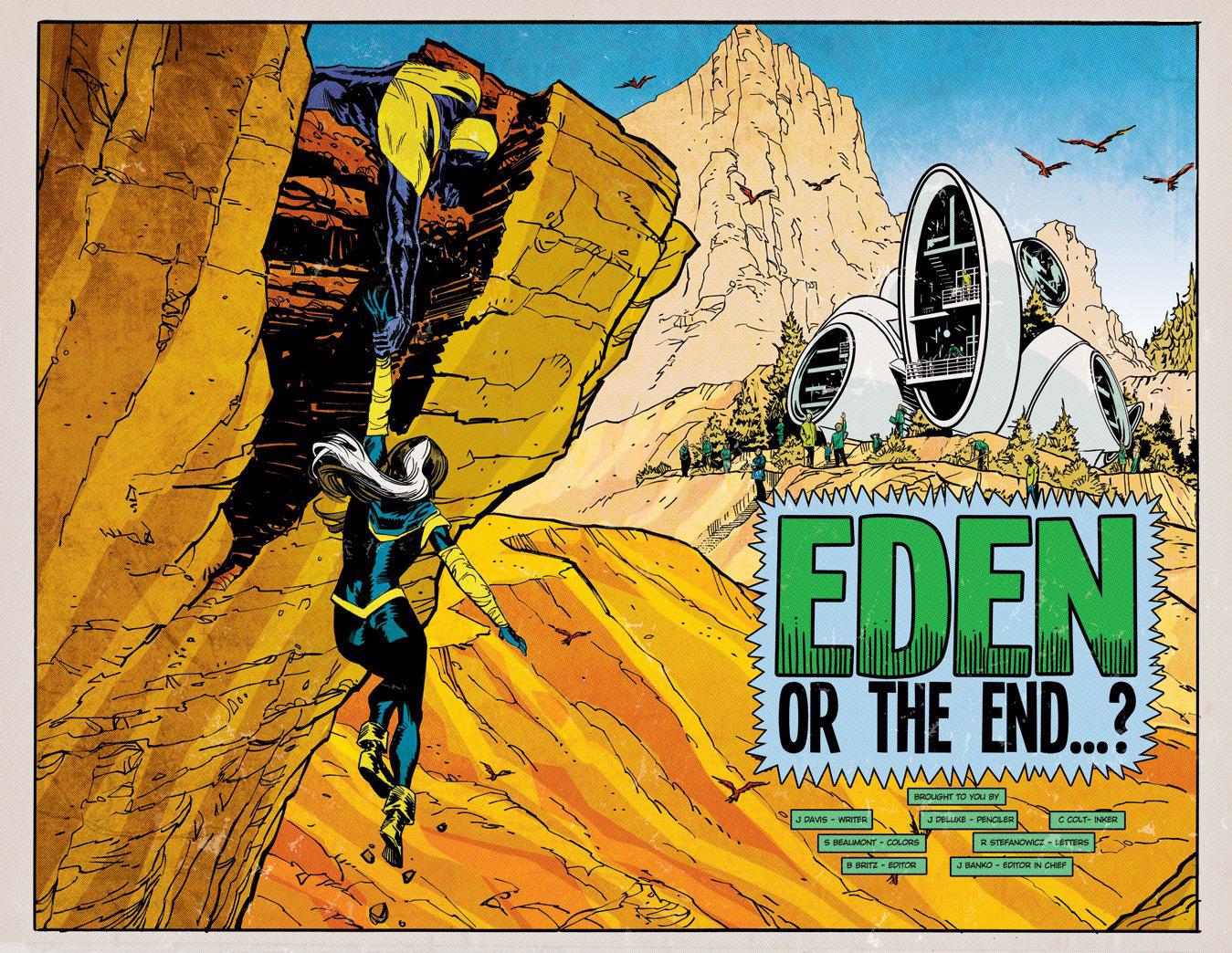 A couple of covers can be seen below. On the left is the X-Men cover for the Eden storyline by Quesada. On the right is the same cover colored and prepped with cover elements by Panosian. The Quesada signature has moved, Panosian’s signature added, and an “Is this Eden… or the End?!?” call-out bit of text is added. The difference between the two with the washed-out coloring and breaking up of black spots with aging effects really makes the illustration go from modern to retro in an instant. 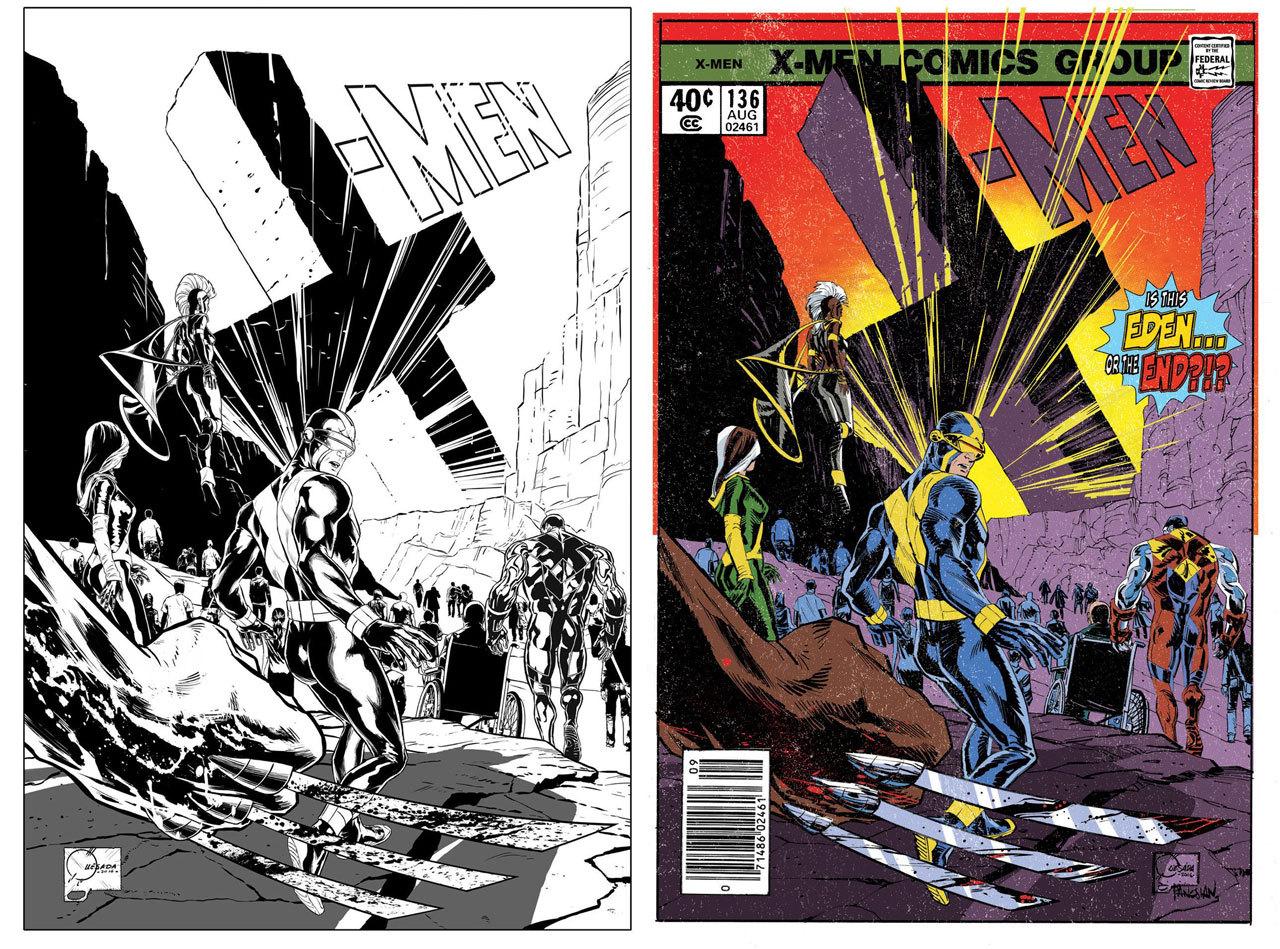 How were the coordinates for Eden chosen?

Panosian: That wasn’t up to me. I’m not so sure they were carefully considered… Maybe they were.

Incidentally, the coordinates used on this comic page (and in the film) lead to a bit of flat land in North Dakota near the border with Canada. This isn’t quite what the film suggests, but – close enough. The coordinates are 48.9770333,-102.155491 if you’d like to look them up for yourself.

These coordinates are very close to an unincorporated community called “Northgate.” In the real world, that is to say. It’s a sort of ghost town at the moment, and sits just opposite the Canadian settlement Northgate, Saskatchewan. This place is one of three Ports of Entry between North Dakota and Canada.

Considerations needed to be made to put comic books in to Logan – for example the following cover. Below is a cover made for the movie but unused for several reasons. As Panosian explains, the X-Men looked “a little too much like the published X-Men.” Poses needed to change and costumes needed to be adjusted. This couldn’t be the same reality we all live in today.

“I just wanted it to look similar to his original costume,” said Panosian. “They wanted to make sure it was an original design.” 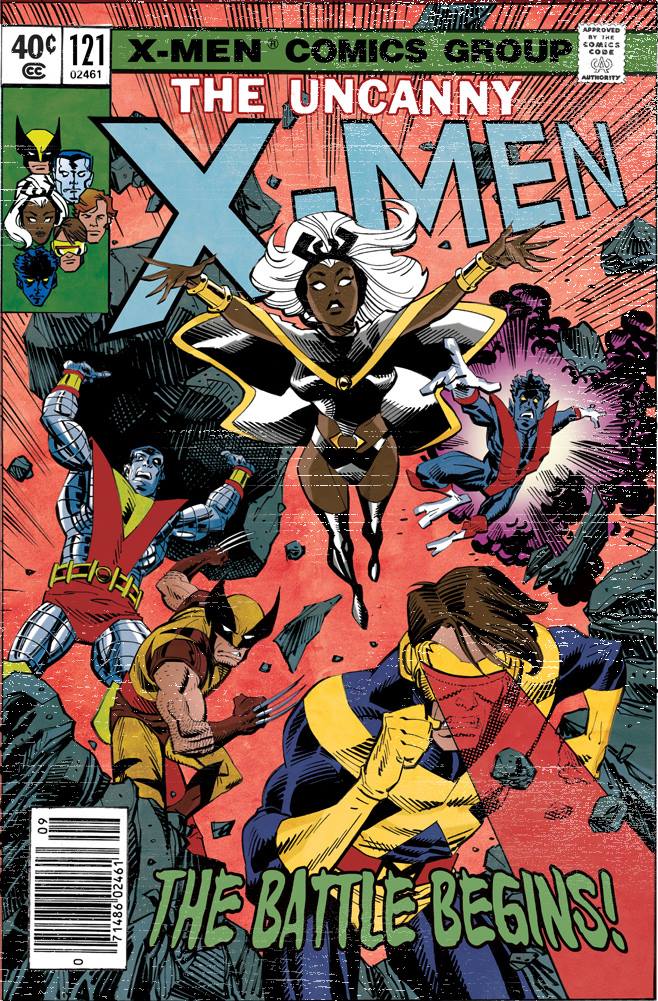 In the gallery below you’ll see a set of interior pages from comics printed and used in Logan. These pages are part of faux storylines and made up of images meant to appear to be similar to 1980’s style X-Men comics. 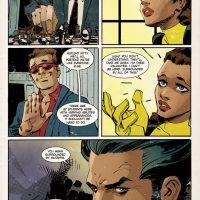 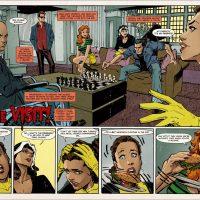 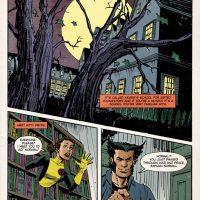 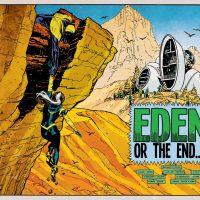 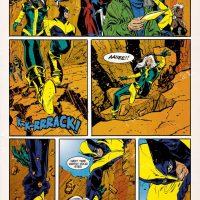 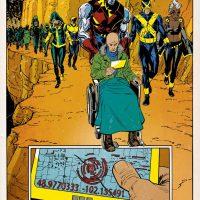 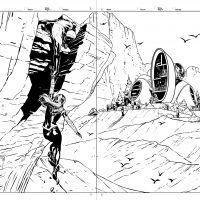 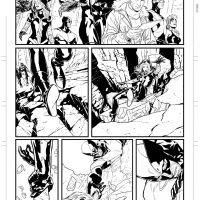 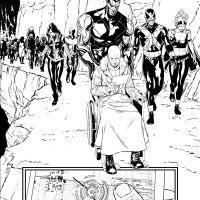 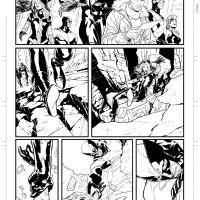 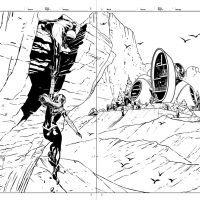 In addition to “Eden,” Panosian was asked to do one more short storyline specifically. “An X-Mansion story was requested,” said Panosian, “which I completed for the film.” This set of pages was used in the film as Wolverine considers his past with the X-Men – as is seen in at least one trailer for Logan.

Next is a “faux cover” as shared by Panosian all the way back in January of this year. This cover remained unused in the film’s final cut (as far as we can remember). 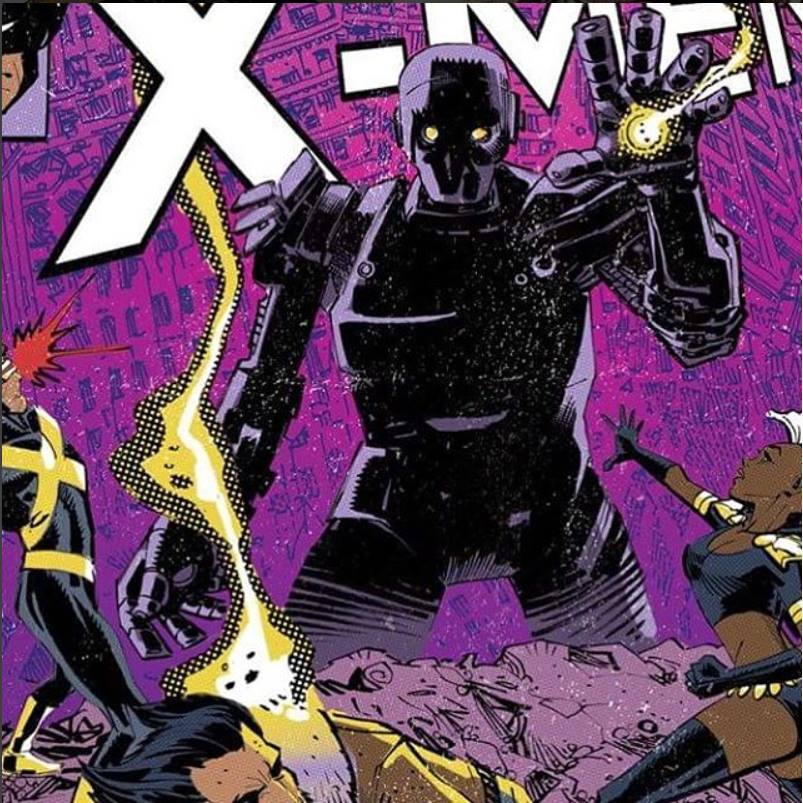 Below on the left is one iteration of the Uncanny X-Men cover for the story “Suddenly: Sauron!” This is the “cleaner” version, without quite so much distressing effects as the final version. On the right is the near-final version. The film version has a different Comics Code label and a new corner box illustration with just Banshee. 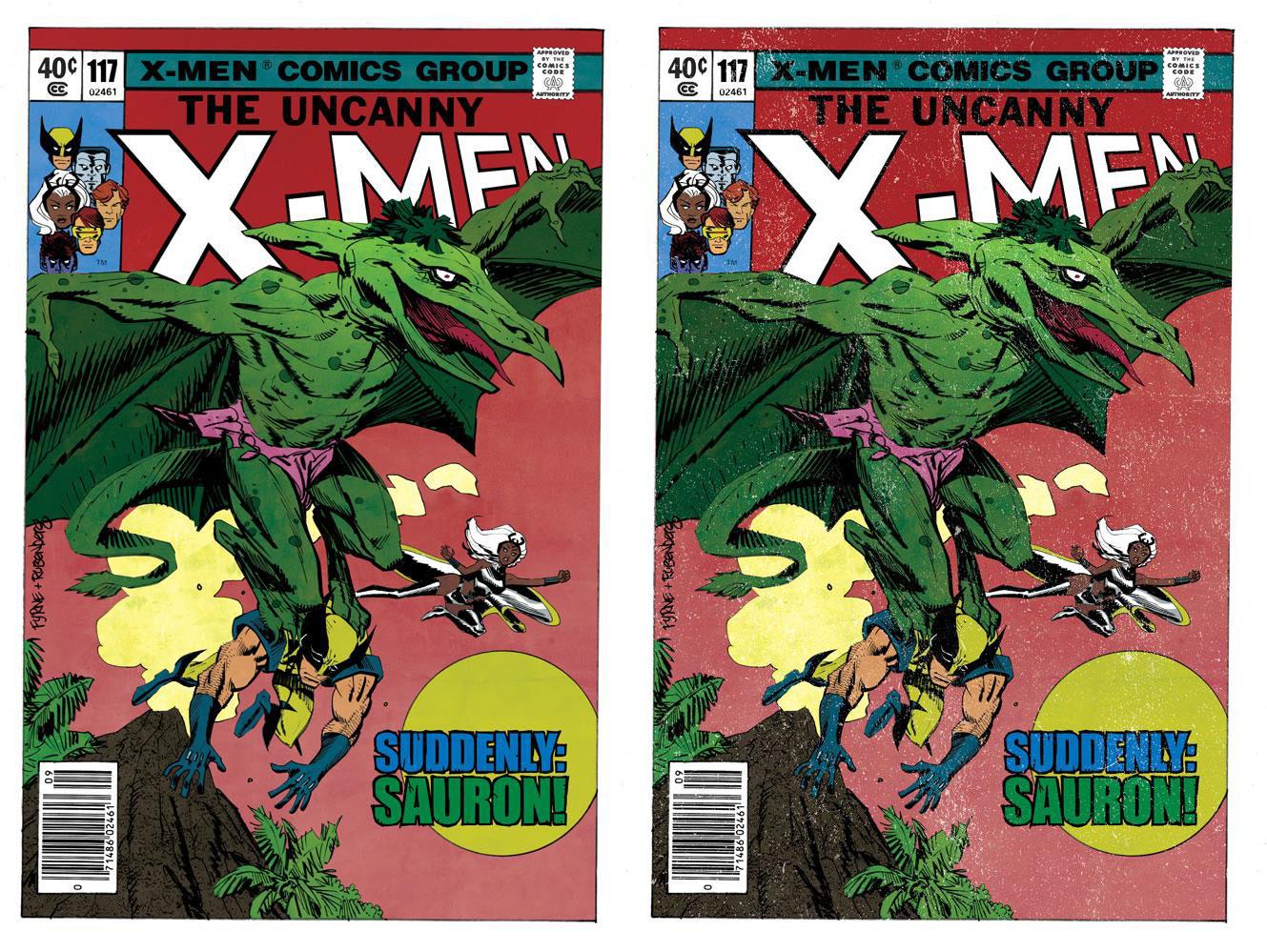 The final version of the comic’s cover – used in the film – is a different color entirely. This version you can see Banshee in the corner and the slightly different Comics Code stamp. 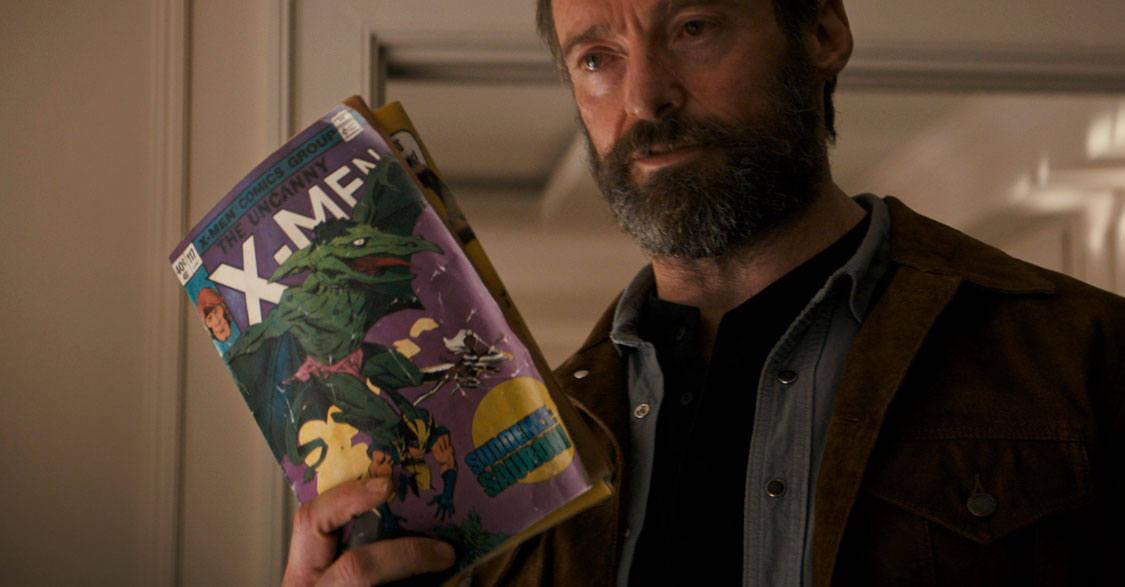 Also of note, some illustrations here have signed names. The styles of these signatures are all different, “all as homages” to Panosian’s “favorite artists of the time.” For the Sauron cover, Panosian says he “Tried to evoke some classic Byrne and Cockrum.”

Next is a gallery of covers made by Panosian. Here we’re seeing some covers used in the film and some that might’ve been used, but not appearing onscreen long enough to have noticed. All images here are pre-printing, meaning they’re nearly the same design as we see in the movie, but not quite. 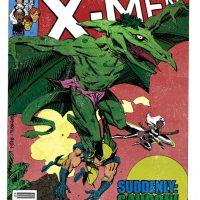 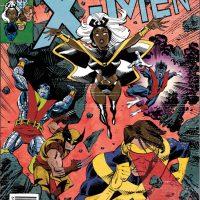 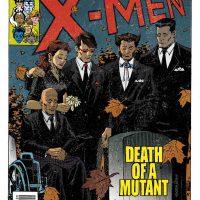 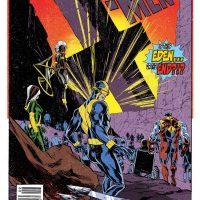 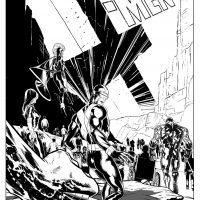 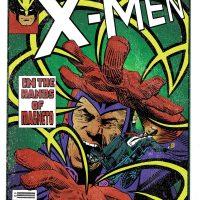 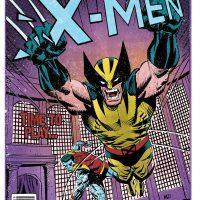 While we can see some fatigued versions of the comics here, you’ll be glad to know that final comics for the movies were aged by hand. “I sent in pre-fatigued versions,” said Panosian. “and nice clean versions that they could dirty up.”

The versions you see here that look like they’ve been kicked around a little were mocked-up by Panosian. “For that it’s a matter of simple textures on top of the art in Photoshop,” said Panosian. “It’s a fun process. Relatively easy too.”

Would you consider the styles you used in this project to be viable for future full-fledged comics? Or are they so much about being a tribute to old styles that they’re not appropriate to expand beyond this project?

Panosian: It would be fun to do an entire comic book that way. I love those art styles from the late 80’s. I think if the art is well crafted – it’s always a viable way to produce a comic book. My “modern” style incorporates aspects of older illustration styles.

The bar code for these comics are real, too. There’s just one bar code used – this same barcode is used on all of the comics that appear in the movie – at least in the images we can see here straight from Panosian. 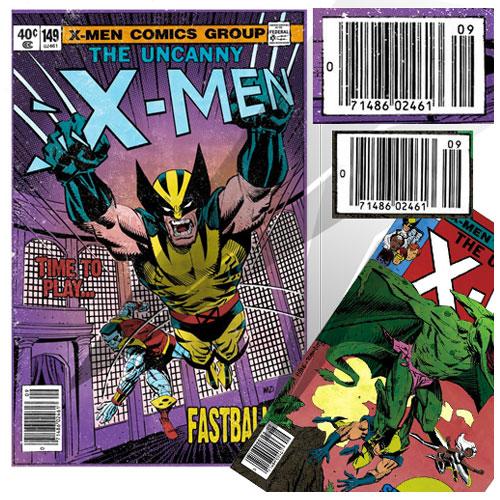 While the bars are a bit too distressed to read in some cases, the numbered code hits Uncanny X-Men 168 – AKA “Professor Xavier Is a Jerk!” 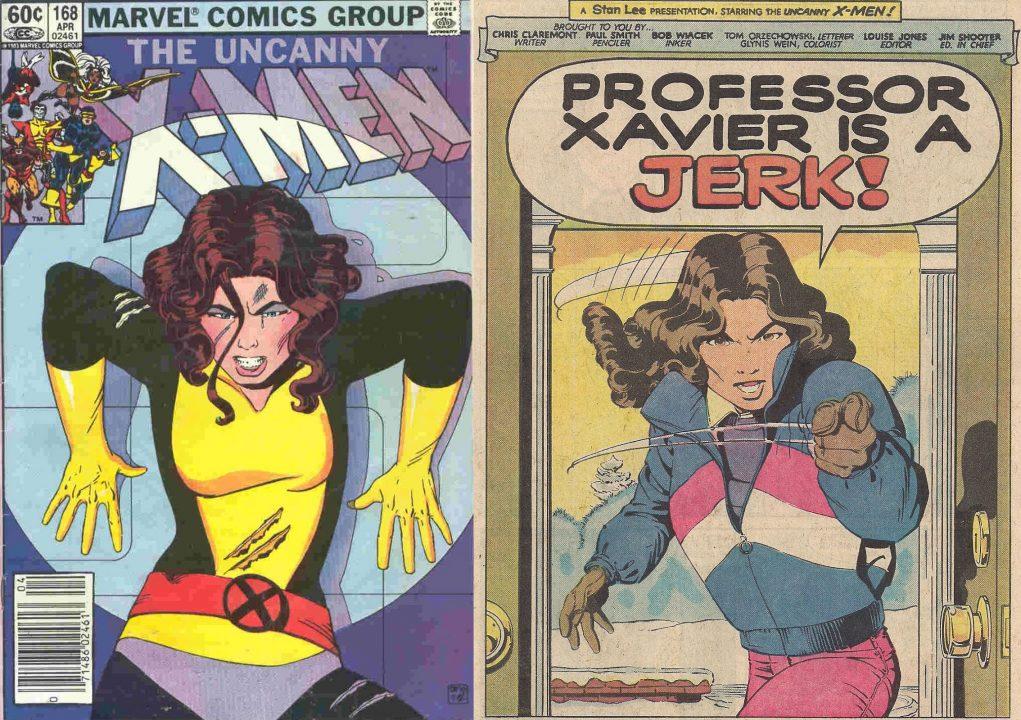 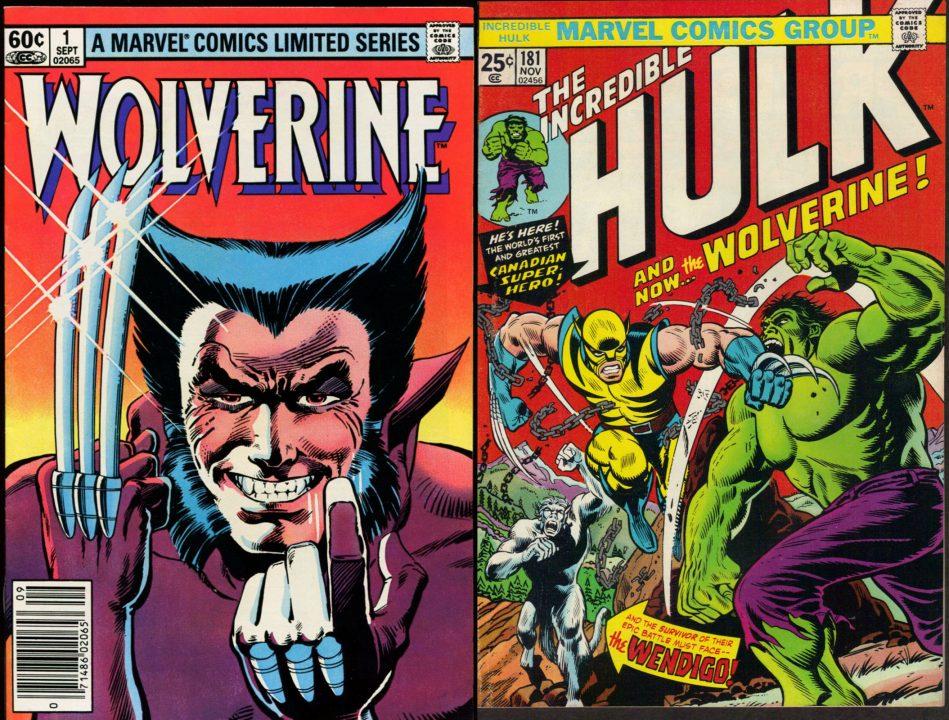 The first hit we get for the Uncanny X-Men referenced in the bar code has a story about Kitty Pryde (Sprite) mad at Professor X on page 1. She’s mad because she’s been moved from the X-Men to the team of younger students called the New Mutants. This is also wildly relevant given the ending implications of Logan and the future of the X-Men movie franchise – with a New Mutants movie currently in production now.

Panosian suggested to us that the choosing of this bar code was not done purposefully. When asked whether this bar code’s corresponding comic had any hidden meaning behind it, Panosian replied, “Not at all. Just a coincidence!”

Maybe it’s just fate, then. We’ll have to wait and see if it was some otherworldly force telling us the future for some other reason. Cross your fingers and your claws!

UPDATE: To be extra clear, the UPC code also corresponds to the Uncanny X-Men series in general. In the 1980s, at least – right on time for the faux comics style made for Logan. Also neat, not quite as awesome as Kitty Pride saying Professor X is a jerk specifically, but neat nonetheless.

Above you’ll see one of the trailers that features the comics you’ve seen throughout the article. The movie Logan is in theaters throughout the United States right this minute, and we recommend it highly.