Are VR headsets bad for the eyes of children?

Over the past couple of years, we’ve asked every major maker of virtual reality headsets and content what their stance is on children in the VR realm. The answer is (almost) always the same: no comment. Off the record, we’ve found VR headset manufacturers to simply suggest that parents watch their children closely – that they make sure kids aren’t using virtual reality headsets for extended periods of time. As far as this goes with the Samsung Gear VR (the next VR headset coming to stores), it seems that a “monitor children closely” warning is out just the same.

The Samsung Gear VR appears to be sold out online, 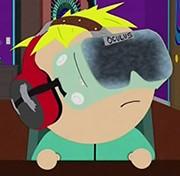 and all is well in the VR universe. Why, you might wonder, would anyone suggest that using a virtual reality headset is bad for your kids? Maybe because their eyes are still developing. Perhaps because their brains are still learning what to attach to as real, and deciding what’s to be believed in their universe.

Maybe they’re just super worried that kids will just run directly into the nearest wall immediately upon placing a VR headset onto their face.

Remember when your mom and dad told you to back up from the TV set? The idea that your eyes will get ruined by sitting too close to the TV is a myth. There is no scientific proof that a TV screen – or any display, for that matter – damages your eyesight.

Straining your eyes, on the other hand, can lead to other not-so-great results. You might get one gosh-darned terrible headache, for example.

Google Expeditions takes classes on a Cardboard fieldtrip, makes VR educational
You might also find that after wearing a VR headset for several minutes will result in slightly blurred vision once you take the headset off – but only for a moment.

The real reason any one of the companies we’ve spoken with would have said “no comment” with regard to children is the relative lack of research done with this specific application of displays and magnifying glasses.

If you have a VR headset – like the Samsung Gear VR – on without the smartphone, and you decide to stare at the sun, you’re gonna have a bad time.

You could destroy your eyesight by staring in to the sun without eye gear on – with the magnification of the sun’s rays directly into the center of your eyeball… that’s just a bad idea.

The same is true of this or any other VR headset with the sun in the other direction. Don’t leave your VR headset out in the sun – or in any other environment – with light (especially the sun) beating down on the headset’s lenses.

If the sun shines through the lenses and on to the display (the built-in display if you’re using Oculus Rift, or the display of your phone if you’ve got a Google Cardboard unit), you could wreck your display.

It has happened to people, and they’ve not been happy.

So take care.
Be smart.
Don’t stare into the sun.
You’ll be fine, your kids will (most likely) be fine, too.

If your kids want to use your VR headset, feel free to let them – but do so at your own risk. You’ll find every VR headset released with a warning that suggests you and your loved ones take caution when wearing.