Devices like the Fitbit are very popular today with their ability to monitor things about the wearer like their sleep habits, heart rate, and activity. In the future devices like the Fitbit might be able to do much more by using tiny wireless sensors that allow the monitoring of nerves and internal organs. These tiny wireless sensors are being developed by the University of California, Berkeley and are said to be the first dust-sized sensors that can be implanted into the body.

The tiny sensors need no battery and could stimulate nerves and muscles. The researchers say that these tiny sensors open the door to so-called electroceuticals that could be used to treat disorders like epilepsy, stimulate the immune system, or reduce inflammation. The scientists refer to the tiny sensors as neural dust and for now, they have been implanted in the peripheral nerves of rats. 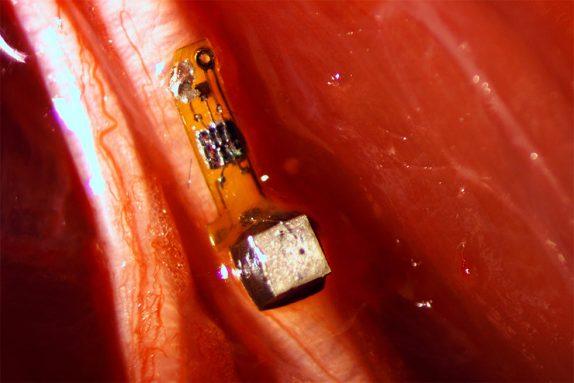 The sensors use ultrasound for power and to read measurements taken. Ultrasound vibrations are able to penetrate just about anywhere in the body, something radio waves are unable to do.

“I think the long-term prospects for neural dust are not only within nerves and the brain, but much broader,” said Michel Maharbiz, an associate professor of electrical engineering and computer sciences and one of the study’s two main authors. “Having access to in-body telemetry has never been possible because there has been no way to put something supertiny superdeep. But now I can take a speck of nothing and park it next to a nerve or organ, your GI tract or a muscle, and read out the data.”

The tiny sensors are currently a 1mm cube, the size of a large grain of sand. Inside they have a piezoelectric crystal that converts ultrasound vibrations from outside the body to electrical power via an integrated transistor that is in contact with the nerve or muscle fiber. The tiny electrodes degrade in 1-2 years currently.